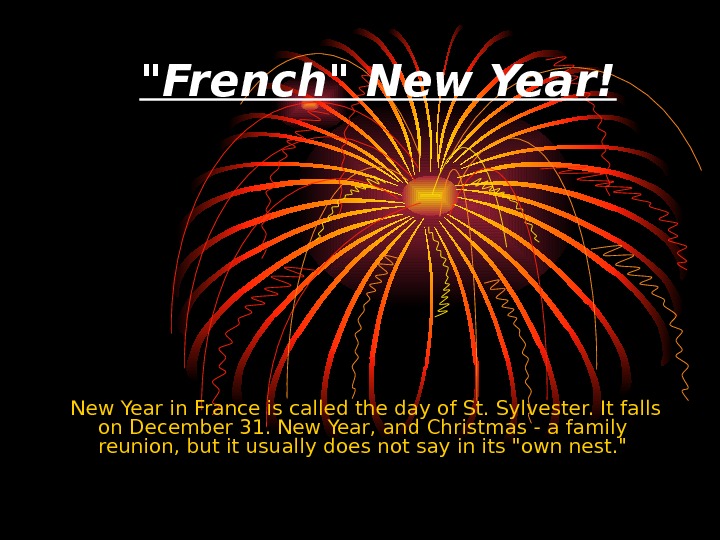 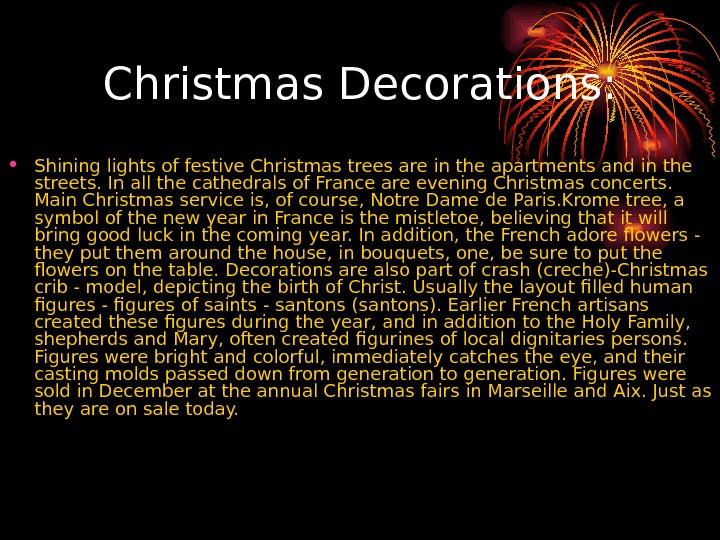 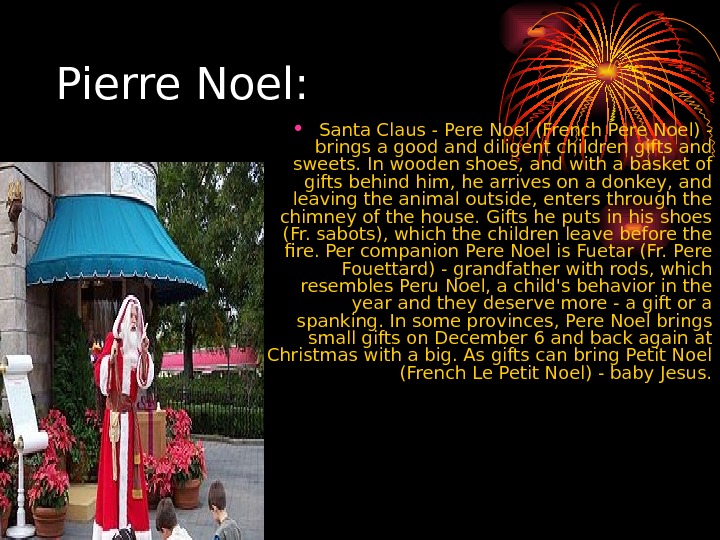 «French» New Year! New Year in France is called the day of St. Sylvester. It falls on December 31. New Year, and Christmas — a family reunion, but it usually does not say in its «own nest. «

The holiday From the 12 th century in France, there was a tradition on Christmas Eve to manufacture a family in the yard of fresh wood (usually cherry tree) Christmas log — Bush de Noel (Buche de Noel). With certain ceremonies solemnly logged in the house. Head of the family poured its oil and heated with wine, and the whole family paid tribute prayers. Little girls burned log with splinters left from logs of the previous year (According to legend, the ash and wood chips, remaining from burning Christmas log, kept the house from lightning and tricks of the devil for a year, so they were carefully collected and stored). It was considered important to have everyone involved in the process of igniting a new log, had clean hands. Gradually, the tradition of burning Bush de Noel dying, even though today in houses with fireplaces, adhere to it. But the majority of the French decorate your table a little mock Bush de Noel, and make out in the form of Christmas log some meals. So today, Bush de Noel — this festive chocolate roll, decorated sugar figurines and leaves.

Traditions of France: • Just before Christmas, the French hung over the door of houses mistletoe, believing that it would bring good luck in the coming year. In addition, the French decorate the house with flowers, be sure to put them on the table. In each house trying to place layout, depicting the birth of Christ. According to tradition, a good master-winemaker New Year’s Eve should clink glasses with a barrel of wine, to congratulate her on the holiday and have a drink for a future harvest. French put under the Christmas tree Santonian — wooden or clay figurines that put near the Christmas tree.

Festive table: • All to the table at Christmas served smoked ham, meat, salads, pastries, fruit, sweets and wine. But the menu varies according to regional culinary traditions. In the north-east of France the main dish is often a goose in Burgundy — turkey with chestnuts. In Brittany, traditionally served buckwheat pancakes with sour cream and Parisians prefer oysters, lobster, foie gras (often put up as Christmas log), and champagne. In Provence on Réveillon 13 desserts are served — is an ancient custom symbolizing Christ and the 12 apostles. The most famous and dessert are mandatory Christmas cake Bush de Noel (in the form of logs. )? In the new year, the French luxury covered banquet tables, which serves traditional French dishes: black pudding, baked turkey, goose, pig’s head with beans, peas , chestnuts, beans or lentils. Prepare a cake for dessert with one bean. Who eats bean, he is «Legumes king» and all must obey him. ?

Gifts: • As for gifts, then there is nothing concrete. Do not be mistaken, if present any funny, elegant, stylish, original, or just a nice little thing. • For example, in 2002, when the French put into circulation have adopted the euro, the French gave packing with fresh pan-European coins total value of 100 francs.

Christmas Decorations: • Shining lights of festive Christmas trees are in the apartments and in the streets. In all the cathedrals of France are evening Christmas concerts. Main Christmas service is, of course, Notre Dame de Paris. Krome tree, a symbol of the new year in France is the mistletoe, believing that it will bring good luck in the coming year. In addition, the French adore flowers — they put them around the house, in bouquets, one, be sure to put the flowers on the table. Decorations are also part of crash (creche)-Christmas crib — model, depicting the birth of Christ. Usually the layout filled human figures — figures of saints — santons (santons). Earlier French artisans created these figures during the year, and in addition to the Holy Family, shepherds and Mary, often created figurines of local dignitaries persons. Figures were bright and colorful, immediately catches the eye, and their casting molds passed down from generation to generation. Figures were sold in December at the annual Christmas fairs in Marseille and Aix. Just as they are on sale today.

Pierre Noel: • Santa Claus — Pere Noel (French Pere Noel) — brings a good and diligent children gifts and sweets. In wooden shoes, and with a basket of gifts behind him, he arrives on a donkey, and leaving the animal outside, enters through the chimney of the house. Gifts he puts in his shoes (Fr. sabots), which the children leave before the fire. Per companion Pere Noel is Fuetar (Fr. Pere Fouettard) — grandfather with rods, which resembles Peru Noel, a child’s behavior in the year and they deserve more — a gift or a spanking. In some provinces, Pere Noel brings small gifts on December 6 and back again at Christmas with a big. As gifts can bring Petit Noel (French Le Petit Noel) — baby Jesus.

Happy New Year. Celebrate the new year, but do not forget the old!