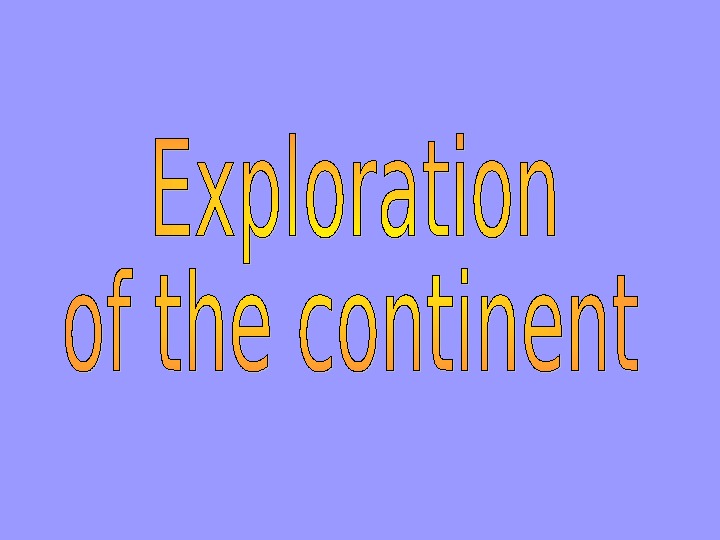 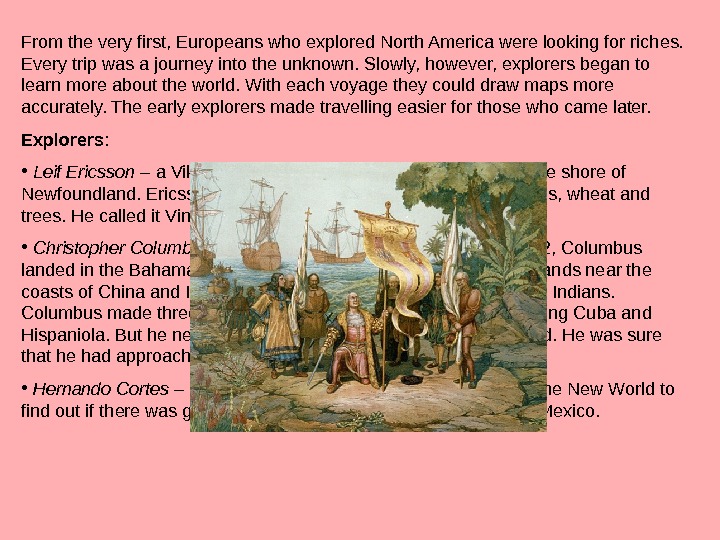 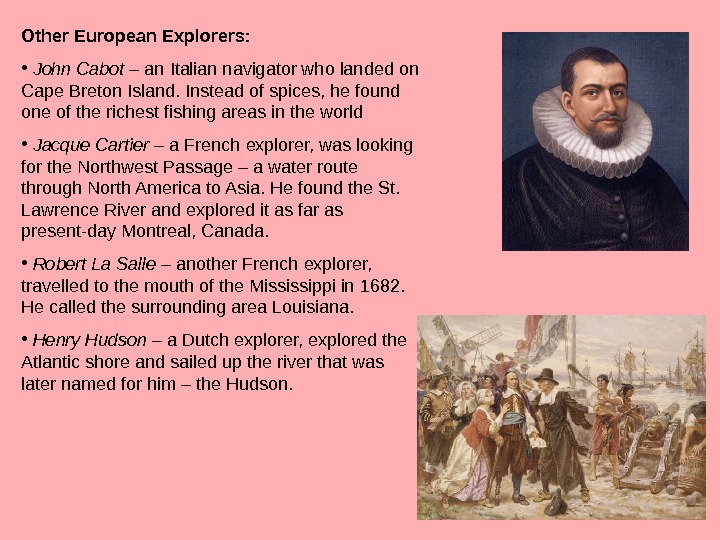 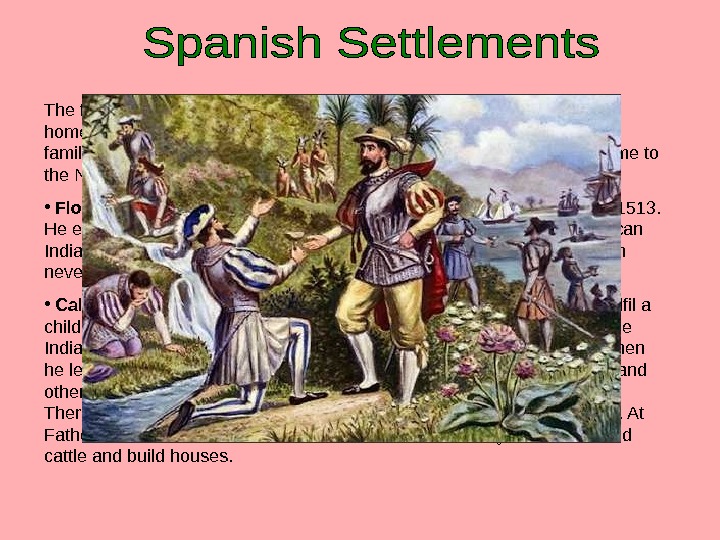 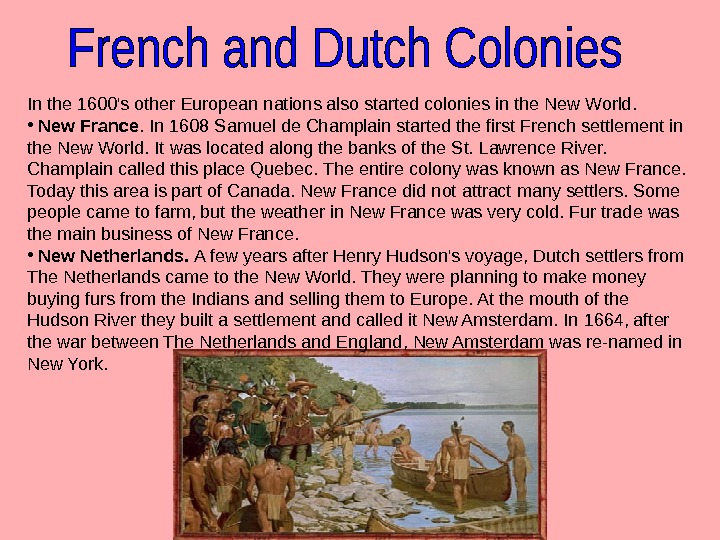 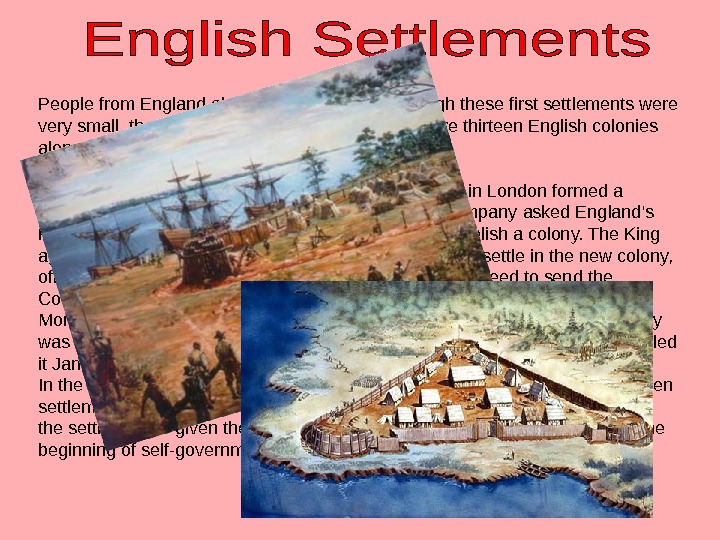 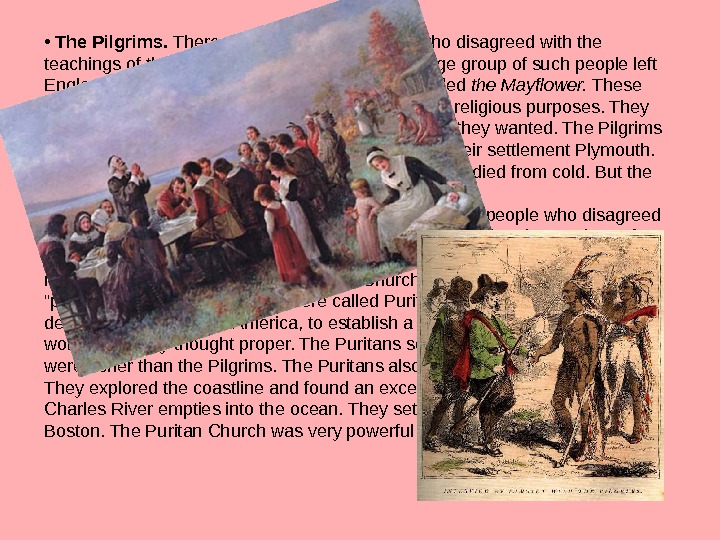 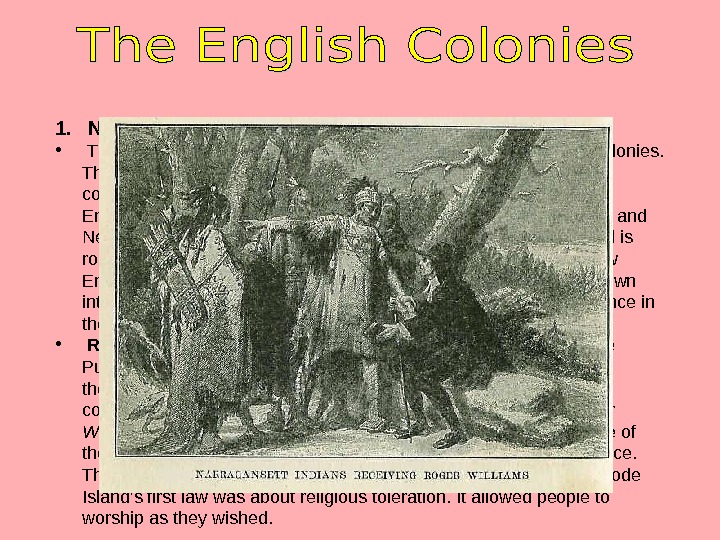 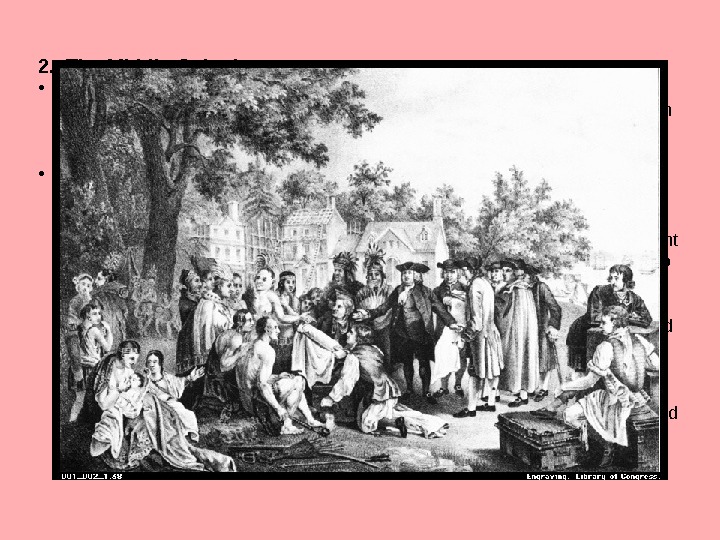 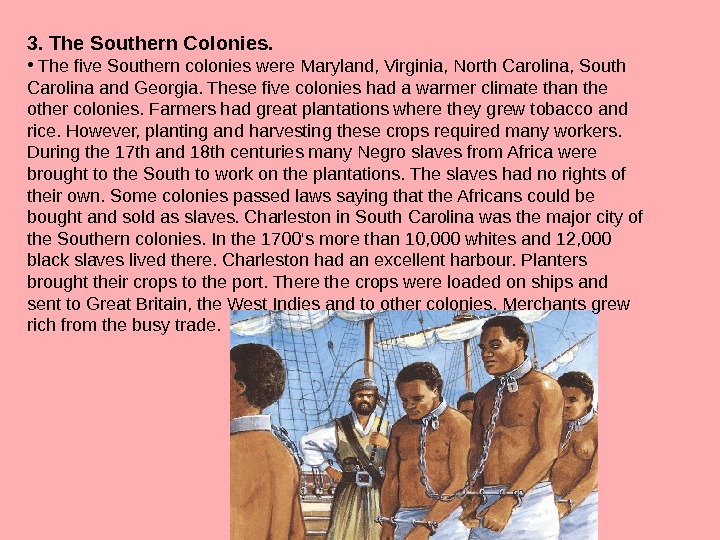 From the very first, Europeans who explored North America were looking for riches. Every trip was a journey into the unknown. Slowly, however, explorers began to learn more about the world. With each voyage they could draw maps more accurately. The early explorers made travelling easier for those who came later. Explorers : • Leif Ericsson – a Viking sailed west of Greenland came to the shore of Newfoundland. Ericsson described a land in which he found grapes, wheat and trees. He called it Vinland. • Christopher Columbus – an Italian explorer. On October 12, 1492, Columbus landed in the Bahamas. He thought that he reached a group of islands near the coasts of China and India. That’s why he called the people he saw Indians. Columbus made three additional voyages to the New World, opening Cuba and Hispaniola. But he never knew that he had discovered a new world. He was sure that he had approached China and India from the east. • Hernando Cortes – a Spanish conquer. He led an expedition to the New World to find out if there was gold. He went to a land west of Cuba, called Mexico.

Other European Explorers: • John Cabot – an Italian navigator who landed on Cape Breton Island. Instead of spices, he found one of the richest fishing areas in the world • Jacque Cartier – a French explorer, was looking for the Northwest Passage – a water route through North America to Asia. He found the St. Lawrence River and explored it as far as present-day Montreal, Canada. • Robert La Salle – another French explorer, travelled to the mouth of the Mississippi in 1682. He called the surrounding area Louisiana. • Henry Hudson – a Dutch explorer, explored the Atlantic shore and sailed up the river that was later named for him – the Hudson.

The first Europeans in North America were brave people. They left their homes in Spain, France, En gland The Netherlands. They left their families and friends and crossed the wide ocean in small ships. They came to the New World looking for a new life. • Florida. A Spanish explorer named Ponce de Leon reached Florida in 1513. He explored this land in the hope of finding a «Fountain of Youth». American Indians had told the explorer that such a foun tain existed. Ponce de Leon never found the fountain, but he claimed Florida for Spain. • California. Father Junipero Serra came to the New World in 1749 to fulfil a childhood dream. His dream was to become a Catholic priest and help the Indians in North America. First Father Serra spent 20 years in Mexico. Then he led the first Spanish settlers to California. At San Diego Father Serra and other priests built a church and a settlement which they called a mission. There priests taught the Indians about Christianity and Spanish customs. At Father Serra’s mis sion the Indians learned about new ways to farm, breed cattle and build houses.

In the 1600’s other European nations also start ed colonies in the New World. • New France. In 1608 Samuel de Champlain started the first French settlement in the New World. It was located along the banks of the St. Lawrence River. Champlain called this place Quebec. The entire colony was known as New France. Today this area is part of Canada. New France did not attract many settlers. Some people came to farm, but the weather in New France was very cold. Fur trade was the main business of New France. • New Netherlands. A few years after Henry Hudson’s voyage, Dutch settlers from The Netherlands came to the New World. They were planning to make money buying furs from the Indians and selling them to Europe. At the mouth of the Hudson River they built a settlement and called it New Amsterdam. In 1664, after the war between The Netherlands and England, New Amsterdam was re-named in New York.

People from England also started colonies. Although these first settlements were very small, they soon grew. By the 1750’s there were thirteen English colonies along the eastern coast of North America. • Virginia and Jamestown. In 1606 some merchants in London formed a private business called the Virginia Company. The Company asked England’s King James to give them some land in America to establish a colony. The King agreed. The Virginia Company invited people to go and settle in the new colony, offering to pay their travel costs. In return the settlers agreed to send the Company a share of the crops they grew. More than 120 people accepted the offer and set out for Virginia, as the colony was called. They arrived in the spring of 1607. They built a settlement and called it Jamestown, in honour of the King. In the following years more settlers came to Virginia. By 1619 there were eleven settlements in Virginia. The Virginia Company wanted the colony to grow, and the settlers were given the right to vote and elect their own governor. It was the beginning of self-government in the future United States.

• The Pilgrims. There were people in England who disagreed with the teachings of the Church of England. In 1620 a large group of such people left England sailed to North America on a ship called the Mayflower. These people were called Pilgrims – people who travel for religious purposes. They wanted to find a place where they could worship as they wanted. The Pilgrims settled in present-day Massachusetts. They called their settlement Plymouth. The Pilgrims’ first winter was very, hard. Many people died from cold. But the colony survived. • The Puritans. In England there was another group of people who disagreed with the teachings of the Church of England. They said that the services of the Church of England had become too complicated and too rich and took too much money. They wanted to make the Church of England more modest, to «purify» it. For this reason they were called Puritans. The Puritans also decided to sail to North America, to establish a Puritan Church there and to worship as they thought proper. The Puritans set sail in 1630. Many Puritans were richer than the Pilgrims. The Puritans also came to Massachusetts. They explored the coastline and found an excellent har bour where the Charles River empties into the ocean. They settled there and called the place Boston. The Puritan Church was very powerful in the Massachusetts colony.

1. New England. • The English settlements on the Atlantic coast grew into thirteen colonies. The colonies can be divided into three regions: the New England colonies, the Middle colonies and the Southern colonies. The New England colonies were Massachusetts’, Rhode Island, Connecticut and New Hampshire. New England has long and cold winters. The land is rocky and hard to farm. Life was not easy for the colo nists, but New Englanders worked hard. By the mid-1700 ‘s small villages had grown into towns. One town, Boston, had become a city of major impor tance in the colonies. • Rhode Island. The Massachusetts colony had been settled by the Puritans who had come to America for religious freedom. But they themselves did not allow any religious freedom to anybody: they considered their own ideas, the ideas of the Puritan Church. Roger Williams , a popular young priest in the colony, disagreed with some of the Puritan teachings. He his own settlement. He called it Providence. The new settlement grew into a separate colony, Rhode Island’s first law was about religious toleration. It allowed people to worship as they wished.

2. The Middle Colonies. • New York, New Jersey, Pennsylvania and Delaware were called the Middle colonies. The Middle colonies were between New England the Southern colonies. These colonies were settled mainly by English, French, Dutch and German people. They developed the region into a rich farming area. • Penn’s woods. William Penn believed in religious toleration. He founded the colony of Pennsylvania for that purpose. Penn joined a religious group called the Society of Friends. The Friends, or Quakers, as they called themselves, believed in the goodness of all people. They also refused to fight in any wars. Like the Pilgrims and Puritans, the Quakers were not allowed to practice their religion in England. In 1681 Penn sent settlers to this land. He called this land Pennsylvania, which means «Penn’s woods». It was a beautiful land of thick forests, rich soil and clean rivers. William Penn worked hard to build up Pennsylvania. He wrote advertisements telling people in Europe about his colony. Soon people from Germa ny, The Netherlands, Switzerland 1 and other coun tries came to Pennsylvania. Unlike New England, where most of the colonists were English, Pennsylvania was settled by people of many different nations.

3. The Southern Colonies. • The five Southern colonies were Maryland, Virginia, North Carolina, South Carolina and Georgia. These five colonies had a warmer climate than the other colonies. Farmers had great plantations where they grew tobacco and rice. However, planting and harvesting these crops required many workers. During the 17 th and 18 th centuries many Negro slaves from Africa were brought to the South to work on the plantations. The slaves had no rights of their own. Some colonies passed laws saying that the Africans could be bought and sold as slaves. Charleston in South Carolina was the major city of the Southern colonies. In the 1700’s more than 10, 000 whites and 12, 000 black slaves lived there. Charleston had an excellent harbour. Planters brought their crops to the port. There the crops were loaded on ships and sent to Great Britain, the West Indies and to other colonies. Merchants grew rich from the busy trade.