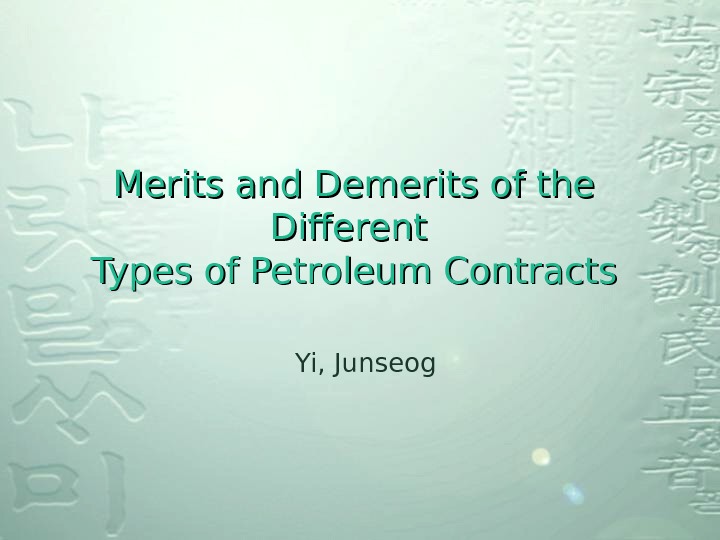 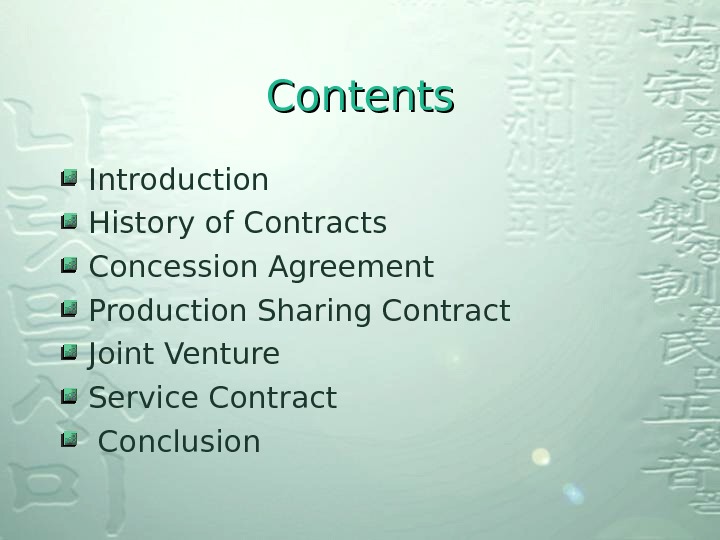 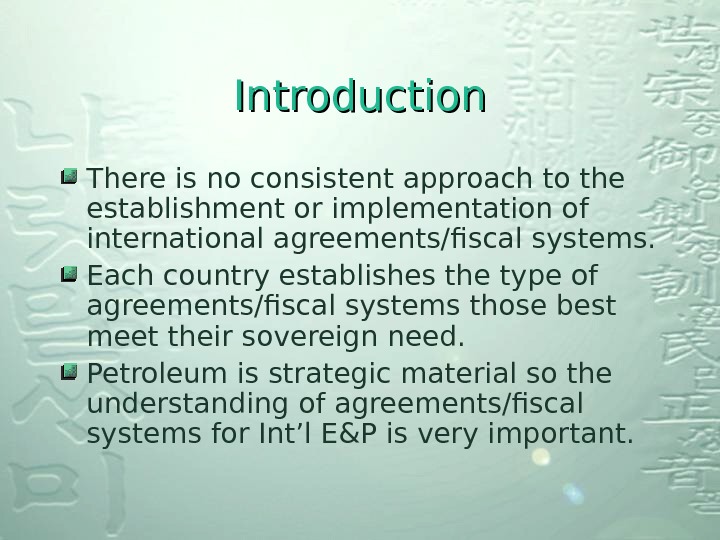 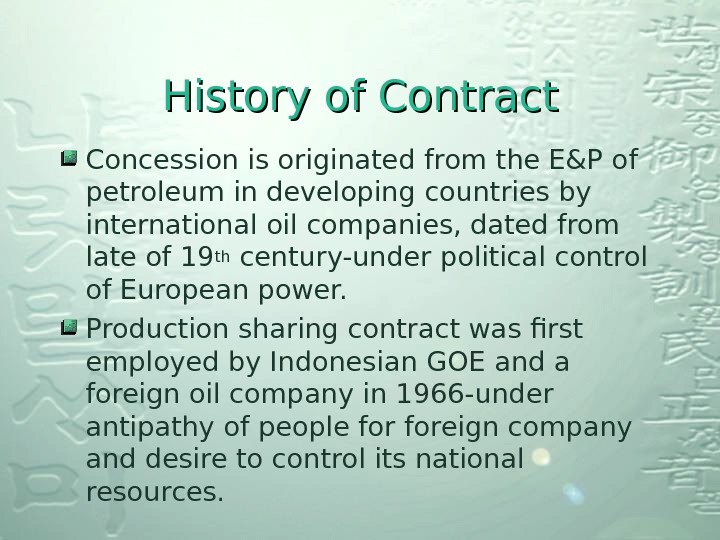 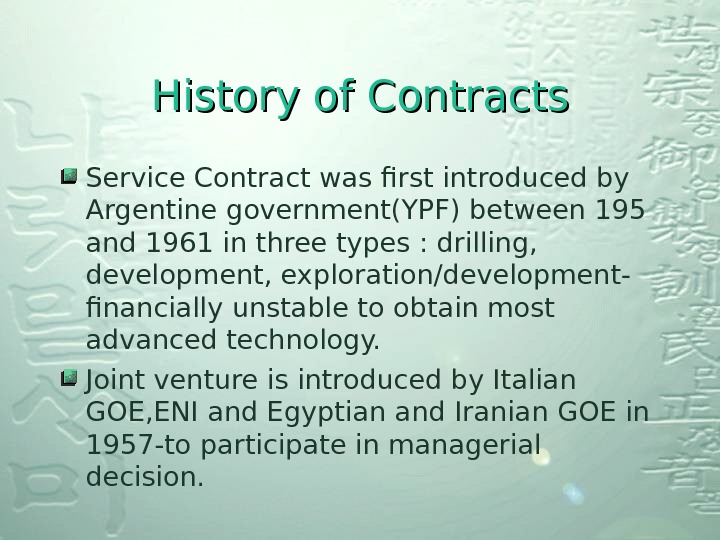 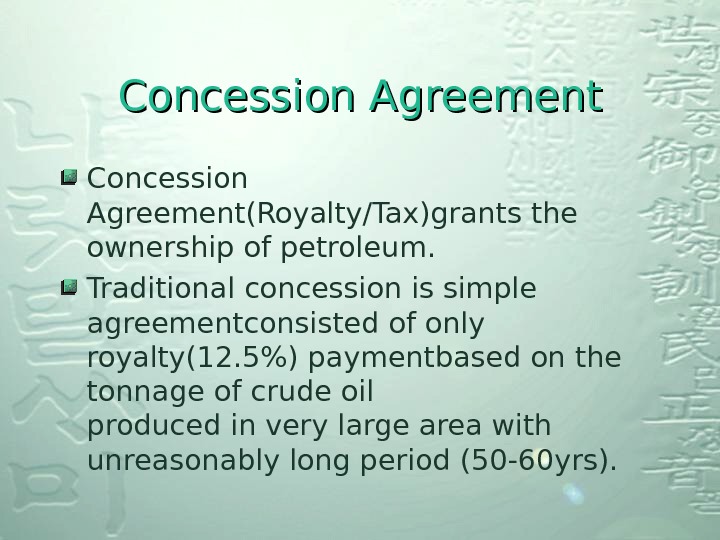 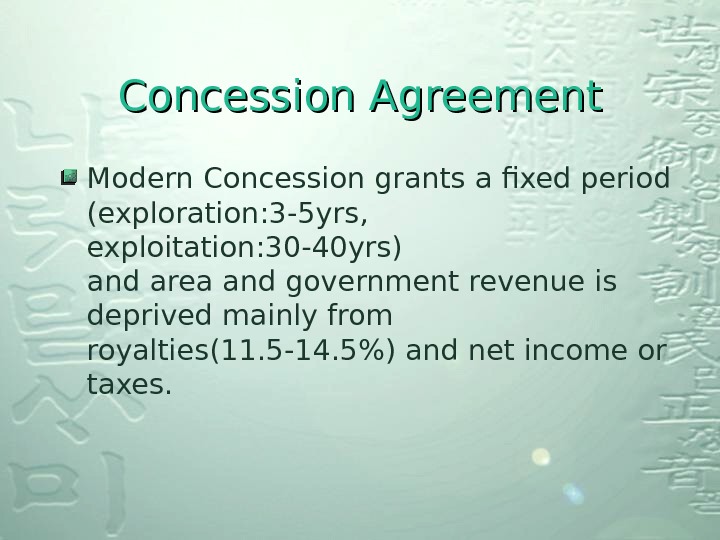 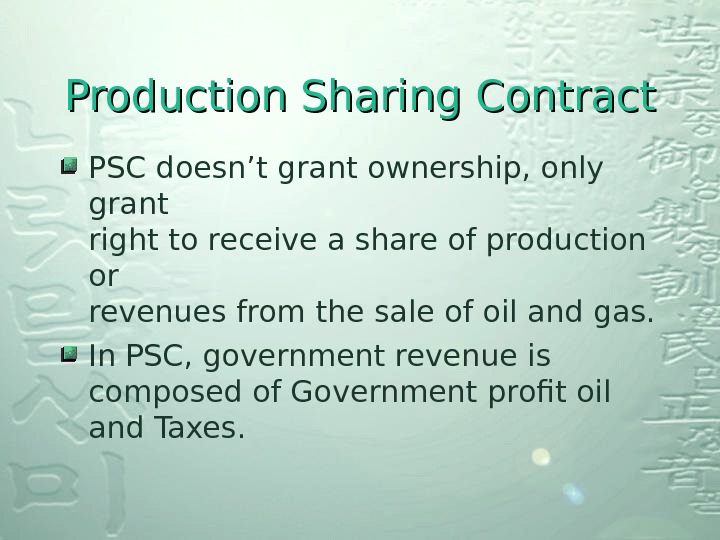 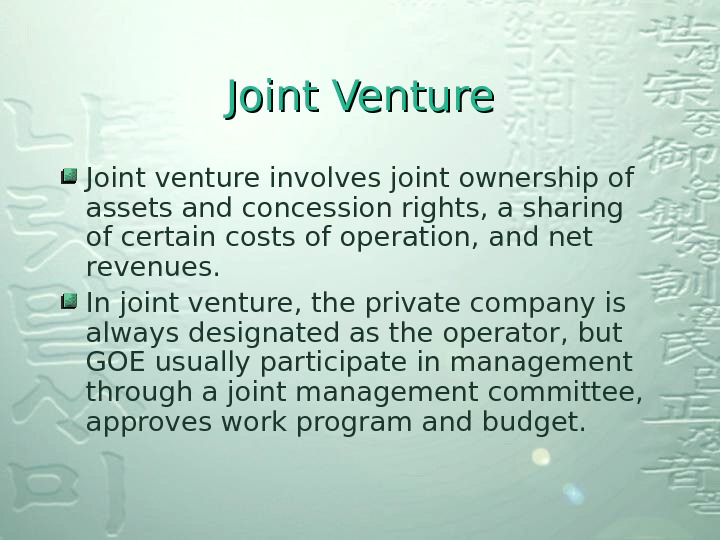 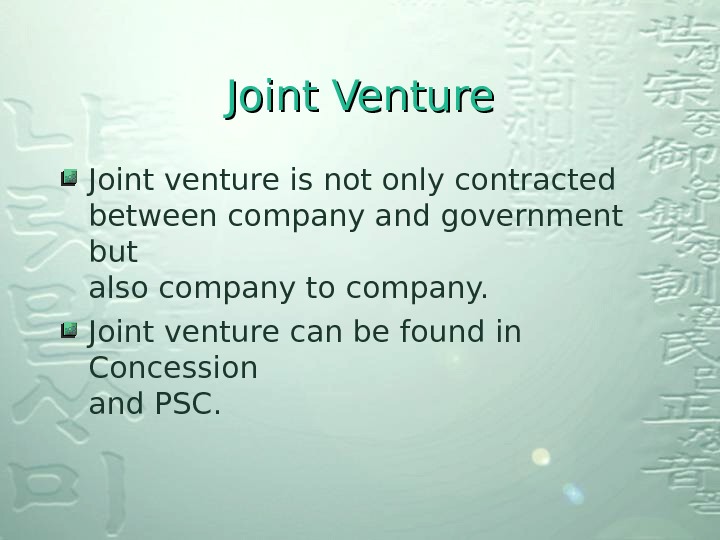 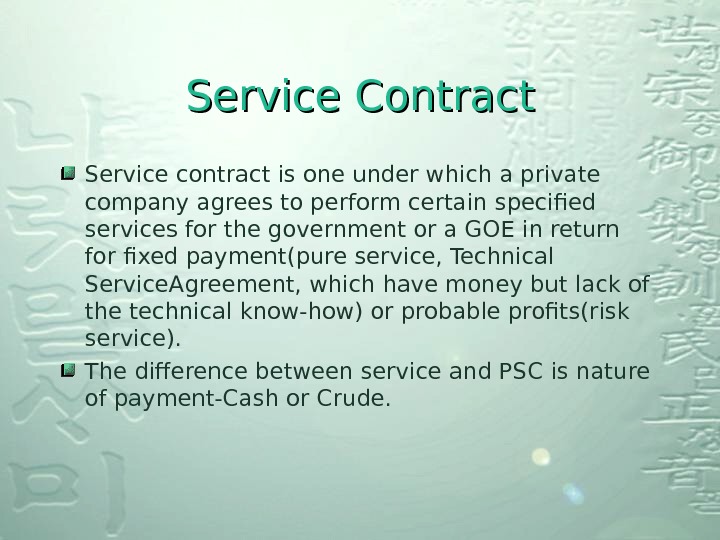 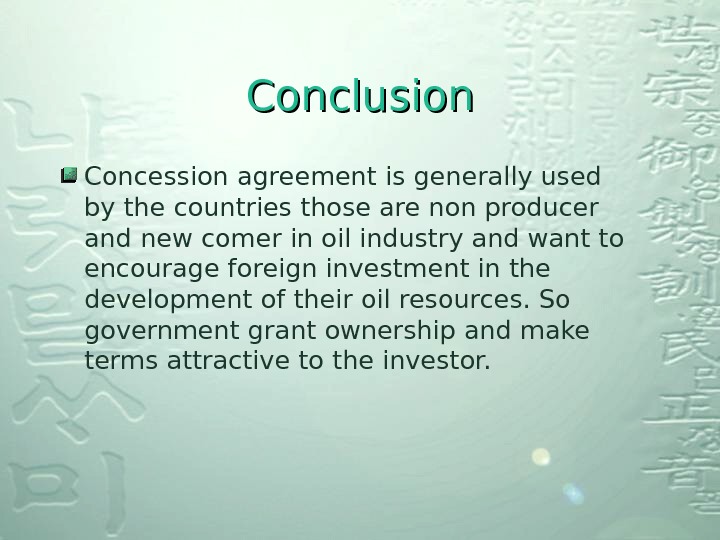 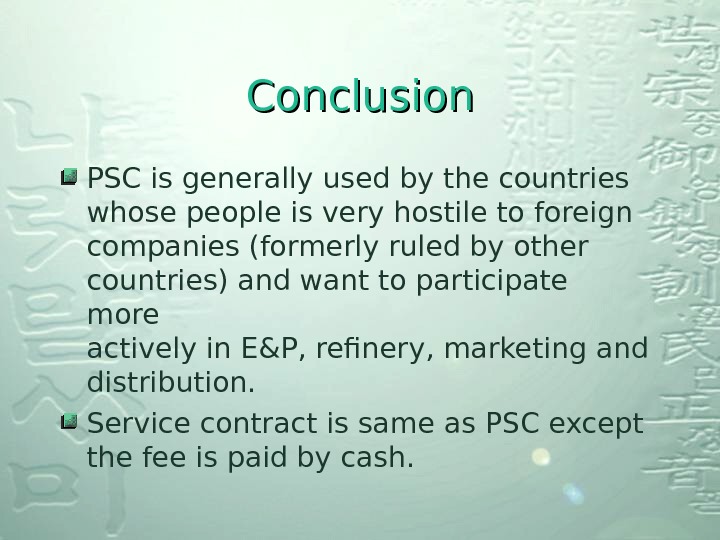 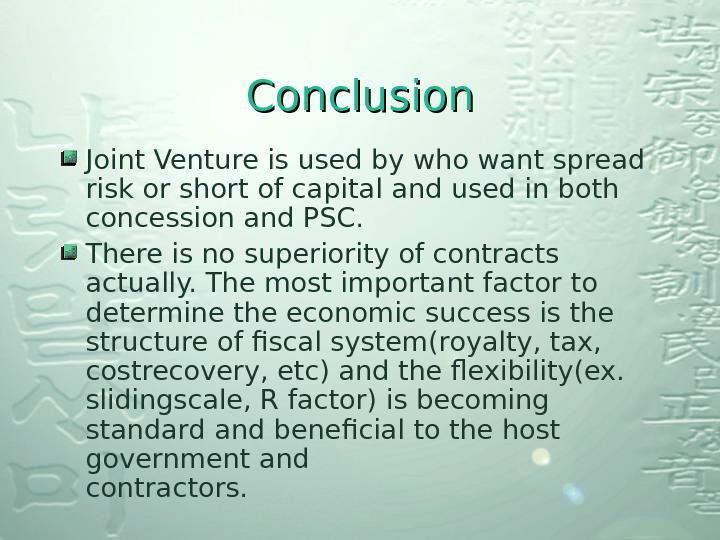 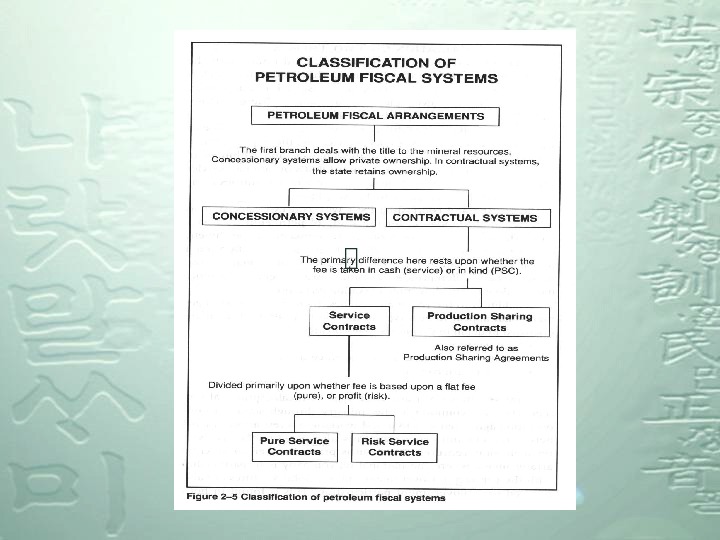 Merits and Demerits of the Different Types of Petroleum Contracts Yi, Junseog

History of Contract Concession is originated from the E&P of petroleum in developing countries by international oil companies, dated from late of 19 th century-under political control of European power. Production sharing contract was first employed by Indonesian GOE and a foreign oil company in 1966 -under antipathy of people foreign company and desire to control its national resources.

History of Contracts Service Contract was first introduced by Argentine government(YPF) between 195 and 1961 in three types : drilling, development, exploration/development- financially unstable to obtain most advanced technology. Joint venture is introduced by Italian GOE, ENI and Egyptian and Iranian GOE in 1957 -to participate in managerial decision.

Concession Agreement(Royalty/Tax)grants the ownership of petroleum. Traditional concession is simple agreementconsisted of only royalty(12. 5%) paymentbased on the tonnage of crude oil produced in very large area with unreasonably long period (50 -60 yrs).

Production Sharing Contract PSC doesn’t grant ownership, only grant right to receive a share of production or revenues from the sale of oil and gas. In PSC, government revenue is composed of Government profit oil and Taxes.

Joint Venture Joint venture involves joint ownership of assets and concession rights, a sharing of certain costs of operation, and net revenues. In joint venture, the private company is always designated as the operator, but GOE usually participate in management through a joint management committee, approves work program and budget.

Joint Venture Joint venture is not only contracted between company and government but also company to company. Joint venture can be found in Concession and PSC.

Service Contract Service contract is one under which a private company agrees to perform certain specified services for the government or a GOE in return for fixed payment(pure service, Technical Service. Agreement, which have money but lack of the technical know-how) or probable profits(risk service). The difference between service and PSC is nature of payment-Cash or Crude.

Conclusion Concession agreement is generally used by the countries those are non producer and new comer in oil industry and want to encourage foreign investment in the development of their oil resources. So government grant ownership and make terms attractive to the investor.

Conclusion PSC is generally used by the countries whose people is very hostile to foreign companies (formerly ruled by other countries) and want to participate more actively in E&P, refinery, marketing and distribution. Service contract is same as PSC except the fee is paid by cash.

Conclusion Joint Venture is used by who want spread risk or short of capital and used in both concession and PSC. There is no superiority of contracts actually. The most important factor to determine the economic success is the structure of fiscal system(royalty, tax, costrecovery, etc) and the flexibility(ex. slidingscale, R factor) is becoming standard and beneficial to the host government and contractors.