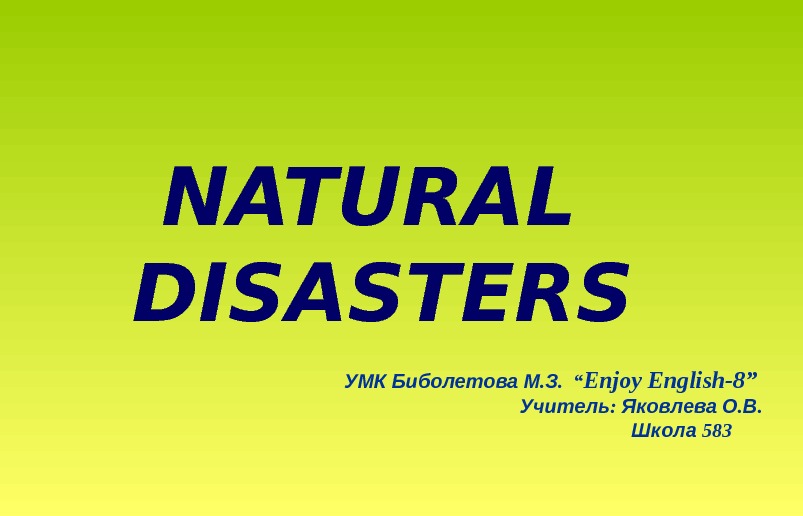 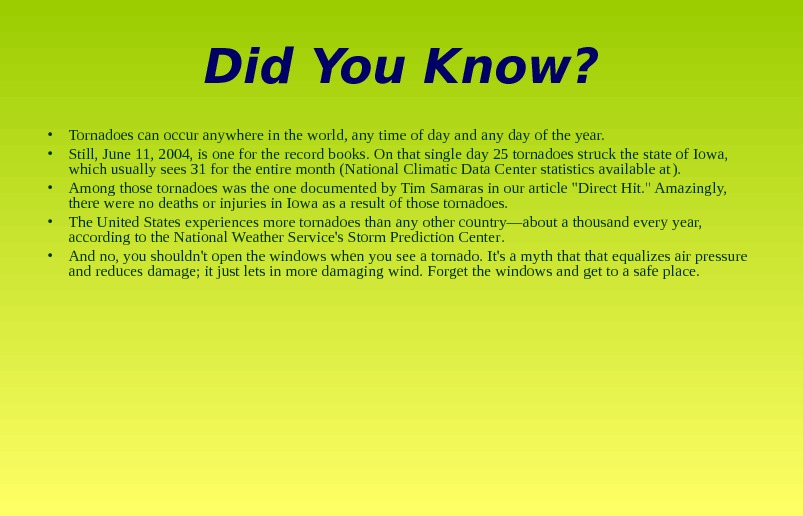 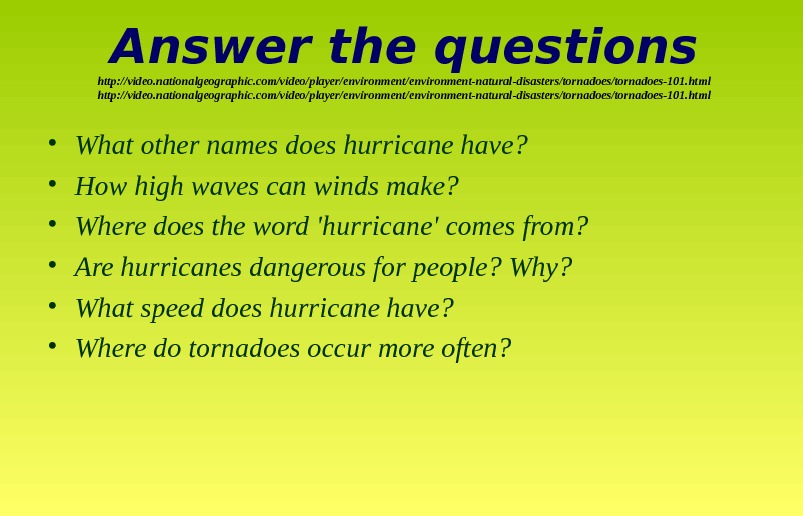 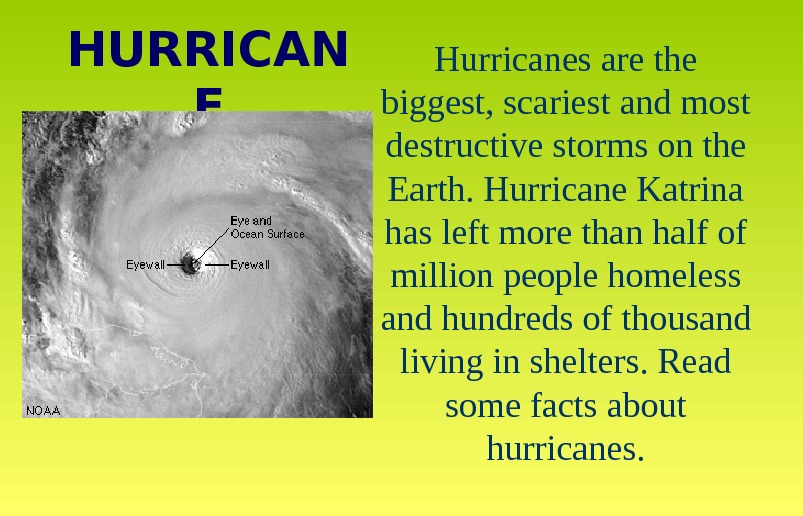 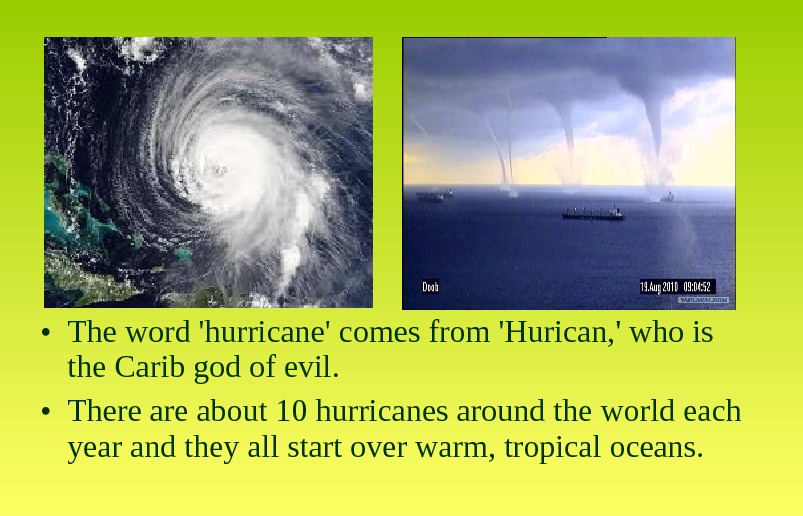 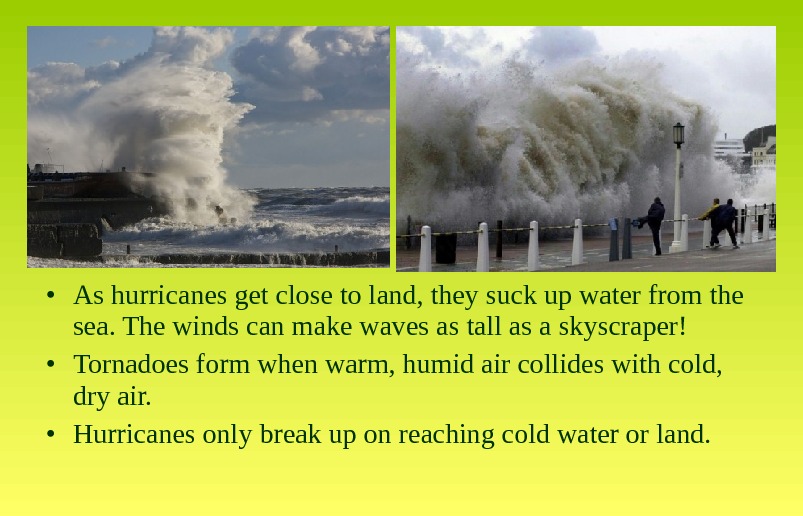 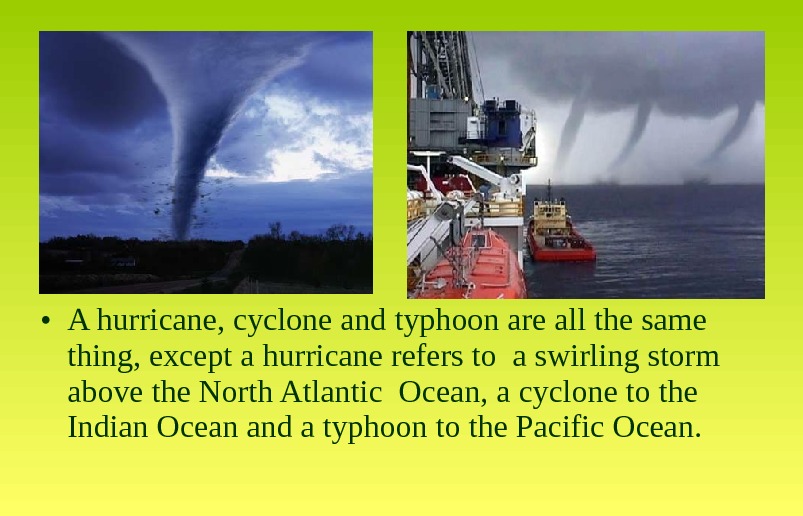 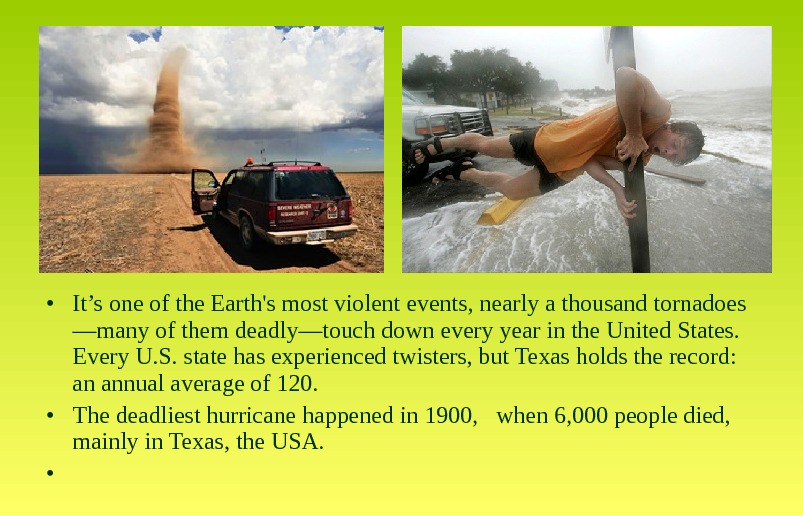 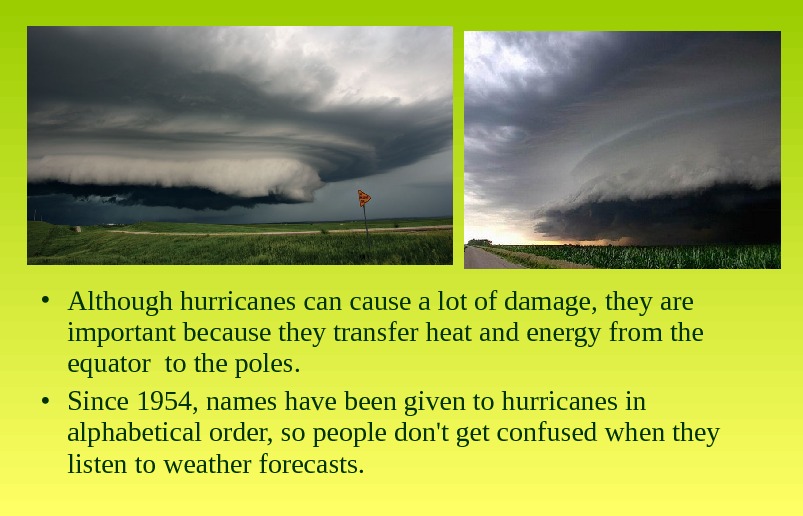 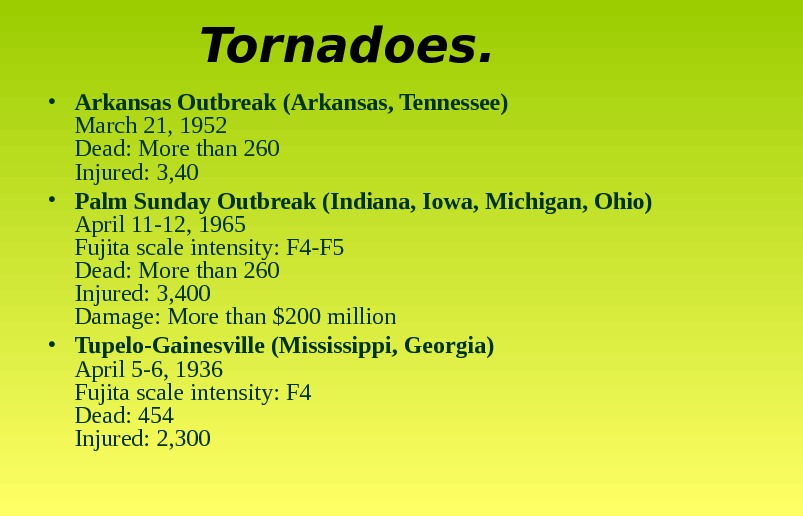 Did You Know? • Tornadoes can occur anywhere in the world, any time of day and any day of the year. • Still, June 11, 2004, is one for the record books. On that single day 25 tornadoes struck the state of Iowa, which usually sees 31 for the entire month (National Climatic Data Center statistics available at ). • Among those tornadoes was the one documented by Tim Samaras in our article «Direct Hit. » Amazingly, there were no deaths or injuries in Iowa as a result of those tornadoes. • The United States experiences more tornadoes than any other country—about a thousand every year, according to the National Weather Service’s Storm Prediction Center. • And no, you shouldn’t open the windows when you see a tornado. It’s a myth that equalizes air pressure and reduces damage; it just lets in more damaging wind. Forget the windows and get to a safe place.

• What other names does hurricane have? • How high waves can winds make? • Where does the word ‘hurricane’ comes from? • Are hurricanes dangerous for people? Why? • What speed does hurricane have? • Where do tornadoes occur more often? Answer the questions http: //video. nationalgeographic. com/video/player/environment/environment-natural-disasters/tornadoes/tornadoes-101. html

Hurricanes are the biggest, scariest and most destructive storms on the Earth. Hurricane Katrina has left more than half of million people homeless and hundreds of thousand living in shelters. Read some facts about hurricanes. HURRICAN

• The word ‘hurricane’ comes from ‘Hurican, ‘ who is the Carib god of evil. • There about 10 hurricanes around the world each year and they all start over warm, tropical oceans.

• As hurricanes get close to land, they suck up water from the sea. The winds can make waves as tall as a skyscraper! • Tornadoes form when warm, humid air collides with cold, dry air. • Hurricanes only break up on reaching cold water or land.

• A hurricane, cyclone and typhoon are all the same thing, except a hurricane refers to a swirling storm above the North Atlantic Ocean, a cyclone to the Indian Ocean and a typhoon to the Pacific Ocean.

• It’s one of the Earth’s most violent events, nearly a thousand tornadoes —many of them deadly—touch down every year in the United States. Every U. S. state has experienced twisters, but Texas holds the record: an annual average of 120. • The deadliest hurricane happened in 1900, when 6, 000 people died, mainly in Texas, the USA. •

• Although hurricanes can cause a lot of damage, they are important because they transfer heat and energy from the equator to the poles. • Since 1954, names have been given to hurricanes in alphabetical order, so people don’t get confused when they listen to weather forecasts.