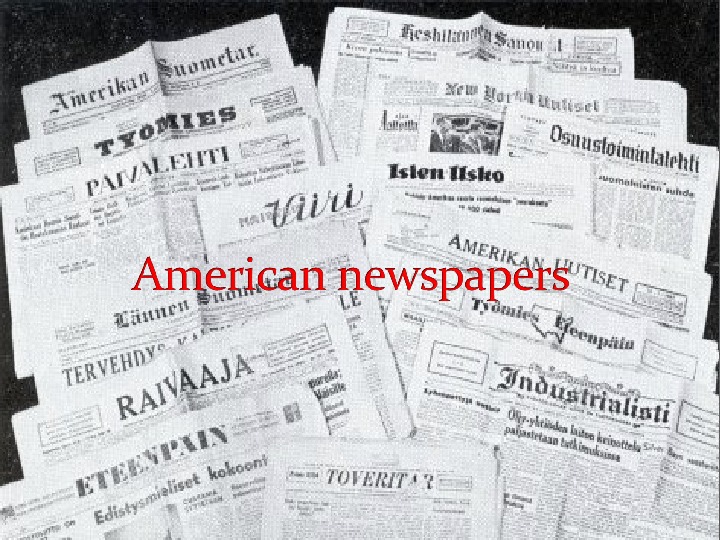 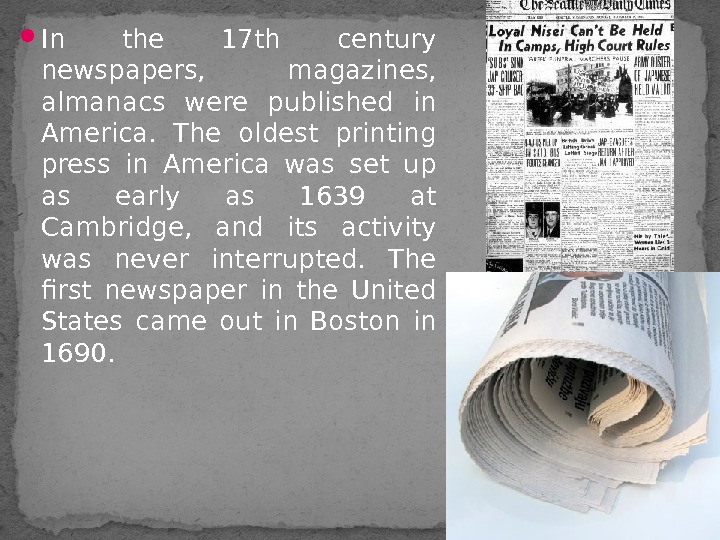 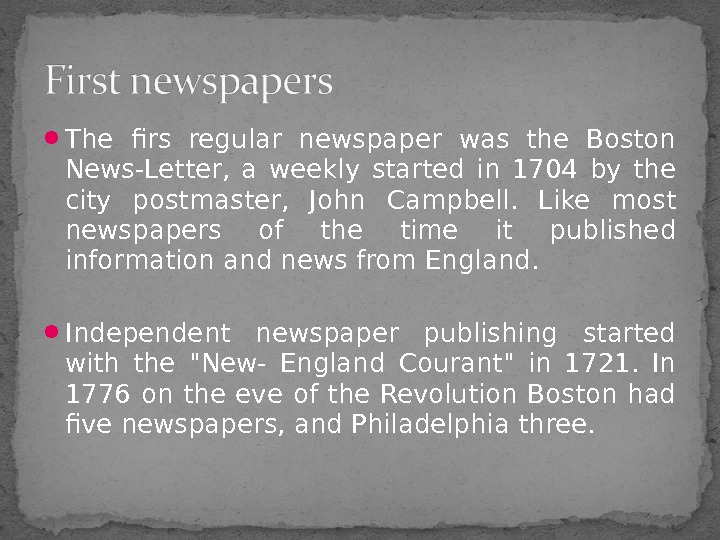 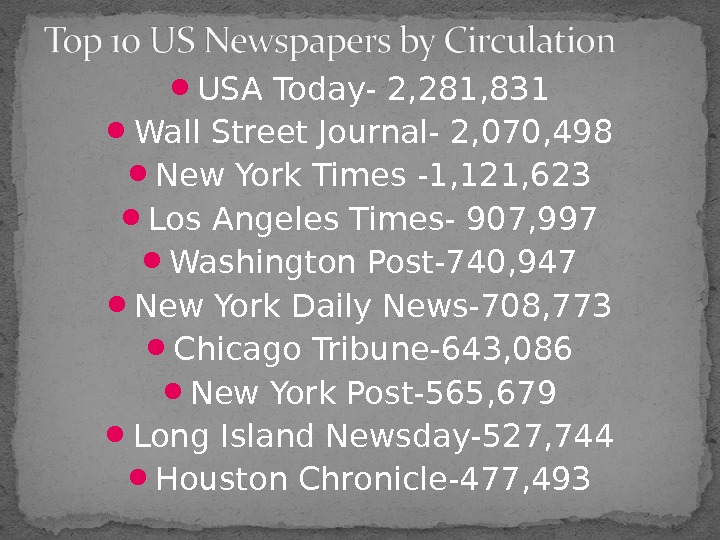 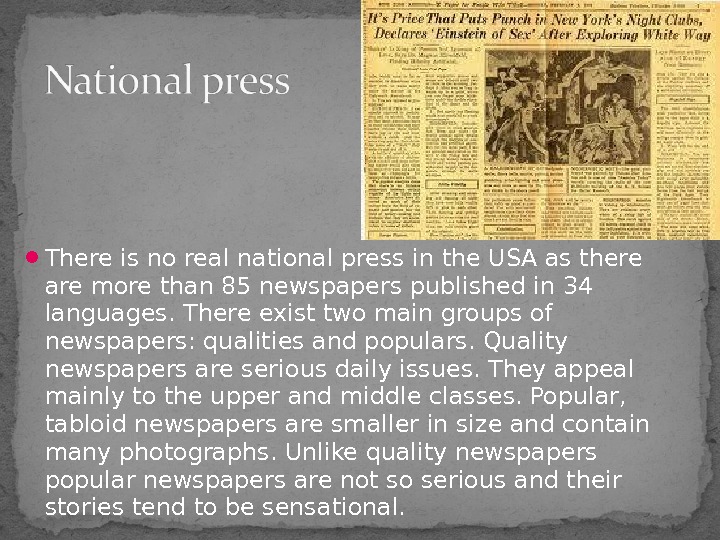 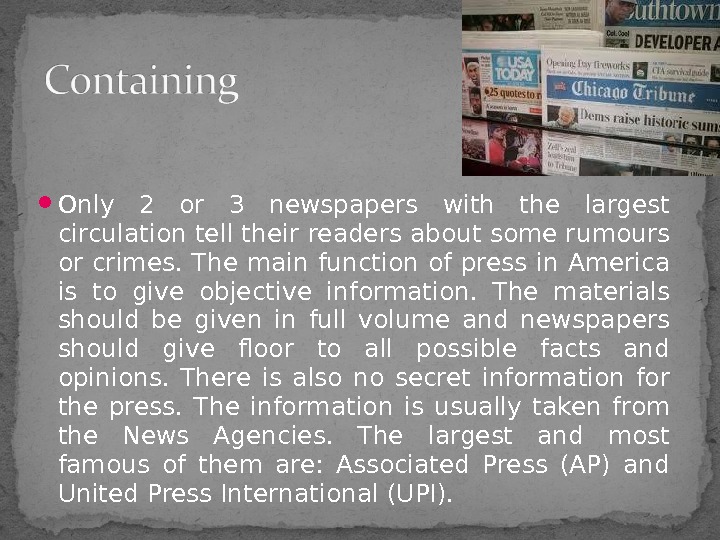 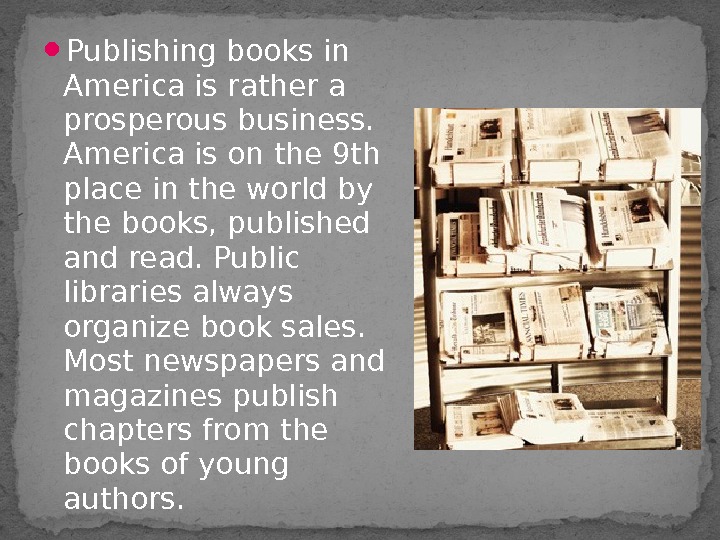 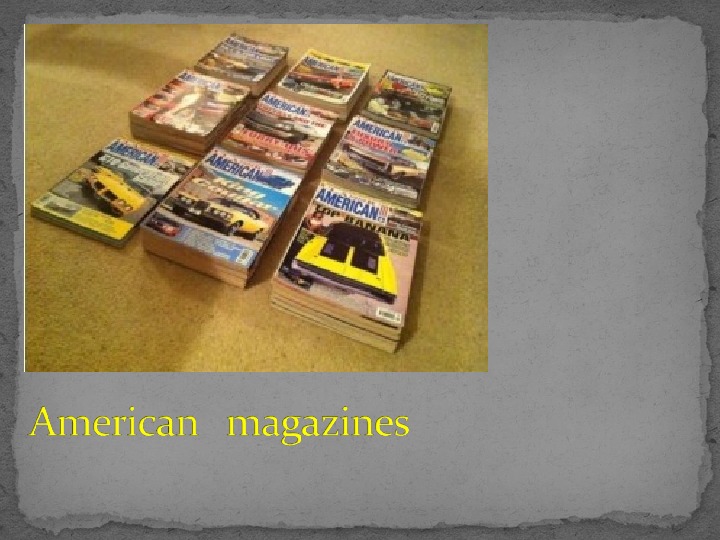 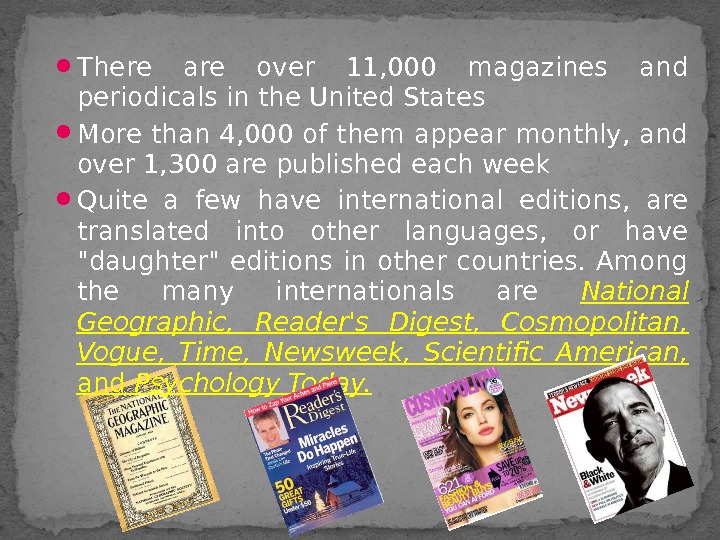 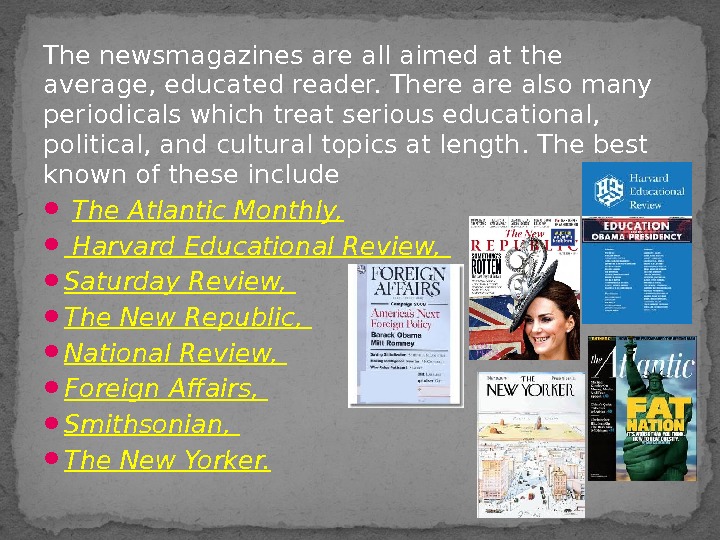 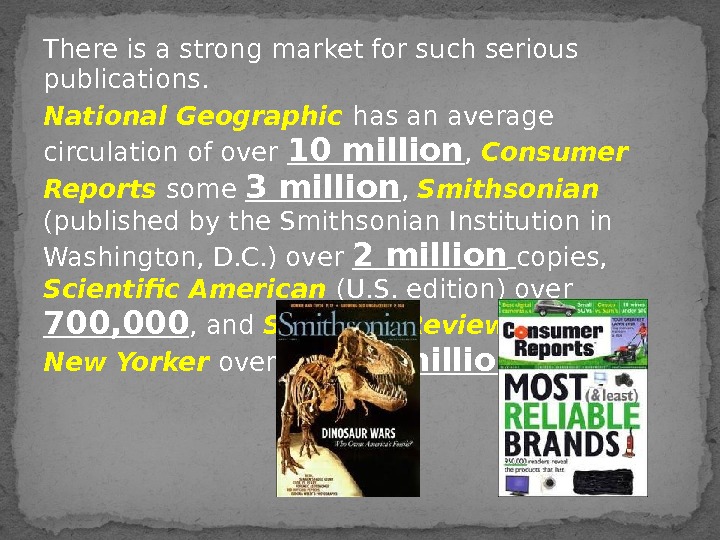 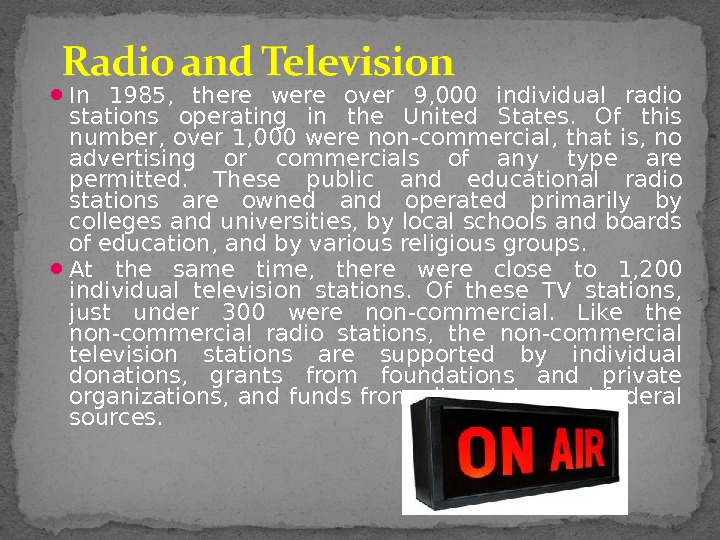 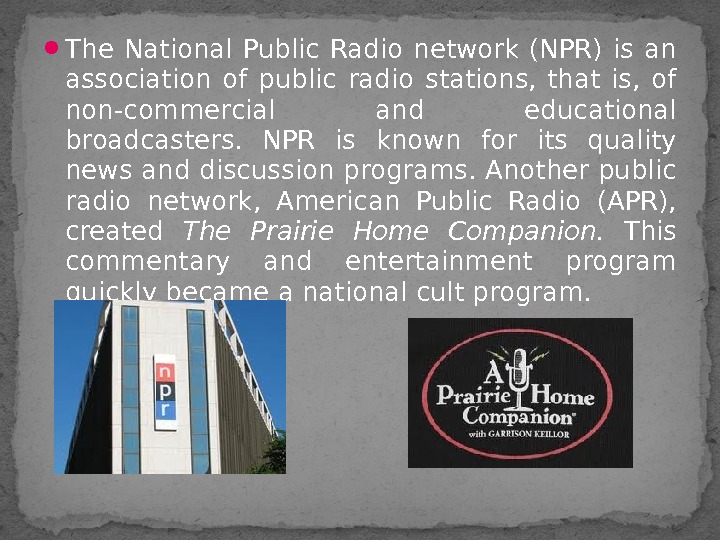 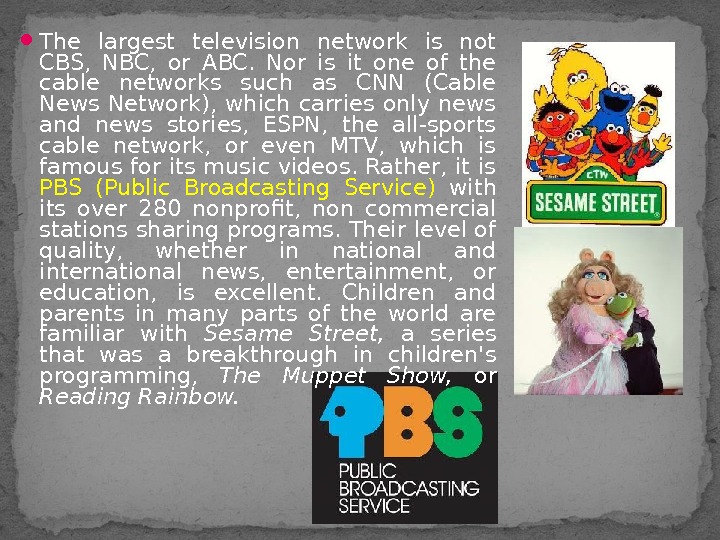 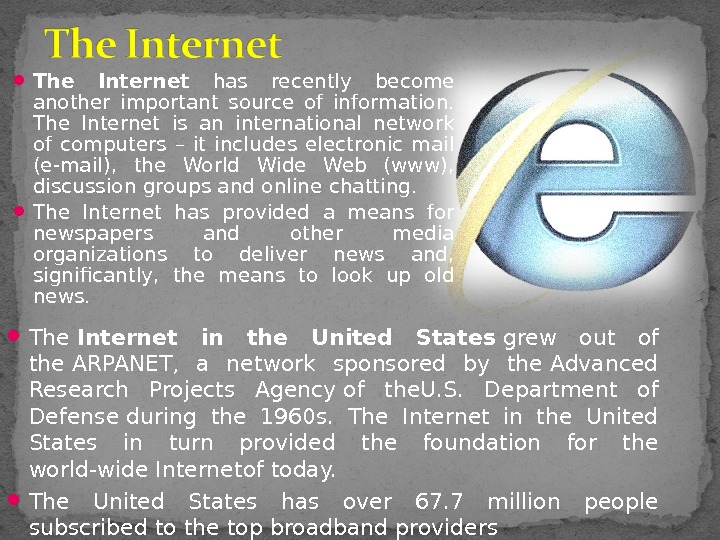 In the 17 th century newspapers, magazines, almanacs were published in America. The oldest printing press in America was set up as early as 1639 at Cambridge, and its activity was never interrupted. The first newspaper in the United States came out in Boston in 1690.

The firs regular newspaper was the Boston News-Letter, a weekly started in 1704 by the city postmaster, John Campbell. Like most newspapers of the time it published information and news from England. Independent newspaper publishing started with the «New- England Courant» in 1721. In 1776 on the eve of the Revolution Boston had five newspapers, and Philadelphia three.

Only 2 or 3 newspapers with the largest circulation tell their readers about some rumours or crimes. The main function of press in America is to give objective information. The materials should be given in full volume and newspapers should give floor to all possible facts and opinions. There is also no secret information for the press. The information is usually taken from the News Agencies. The largest and most famous of them are: Associated Press (AP) and United Press International (UPI).

Publishing books in America is rather a prosperous business. America is on the 9 th place in the world by the books, published and read. Public libraries always organize book sales. Most newspapers and magazines publish chapters from the books of young authors.

There are over 11, 000 magazines and periodicals in the United States More than 4, 000 of them appear monthly, and over 1, 300 are published each week Quite a few have international editions, are translated into other languages, or have «daughter» editions in other countries. Among the many internationals are National Geographic, Reader’s Digest, Cosmopolitan, Vogue, Time, Newsweek, Scientific American, and Psychology Today.

The newsmagazines are all aimed at the average, educated reader. There also many periodicals which treat serious educational, political, and cultural topics at length. The best known of these include The Atlantic Monthly, Harvard Educational Review, Saturday Review, The New Republic, National Review, Foreign Affairs, Smithsonian, The New Yorker.

There is a strong market for such serious publications. National Geographic has an average circulation of over 10 million , Consumer Reports some 3 million , Smithsonian (published by the Smithsonian Institution in Washington, D. C. ) over 2 million copies, Scientific American (U. S. edition) over 700, 000 , and Saturday Review and The New Yorker over half a million each.

The National Public Radio network (NPR) is an association of public radio stations, that is, of non-commercial and educational broadcasters. NPR is known for its quality news and discussion programs. Another public radio network, American Public Radio (APR), created The Prairie Home Companion. This commentary and entertainment program quickly became a national cult program.

The largest television network is not CBS, NBC, or ABC. Nor is it one of the cable networks such as CNN (Cable News Network), which carries only news and news stories, ESPN, the all-sports cable network, or even MTV, which is famous for its music videos. Rather, it is PBS (Public Broadcasting Service) with its over 280 nonprofit, non commercial stations sharing programs. Their level of quality, whether in national and international news, entertainment, or education, is excellent. Children and parents in many parts of the world are familiar with Sesame Street, a series that was a breakthrough in children’s programming, The Muppet Show, or Reading Rainbow.