PRESIDENTIAL SUPPORT STAFF So you wanna work for 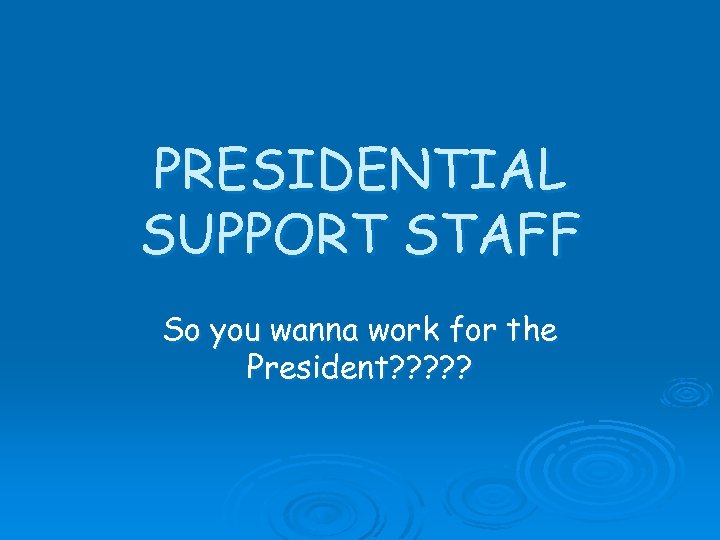 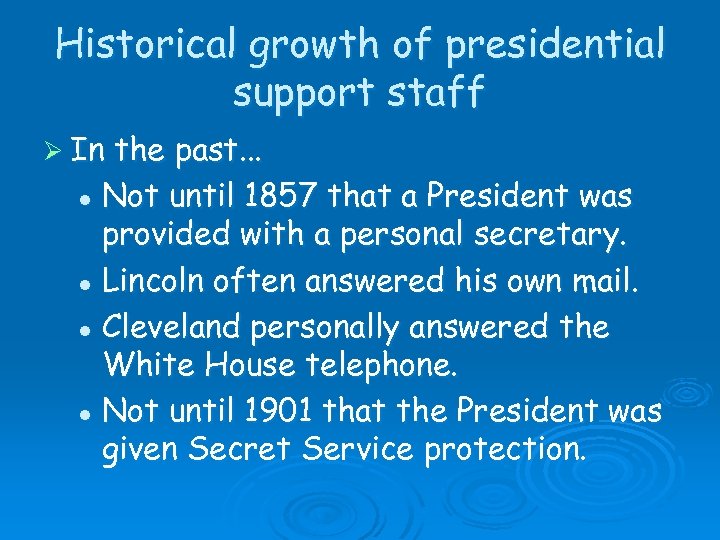 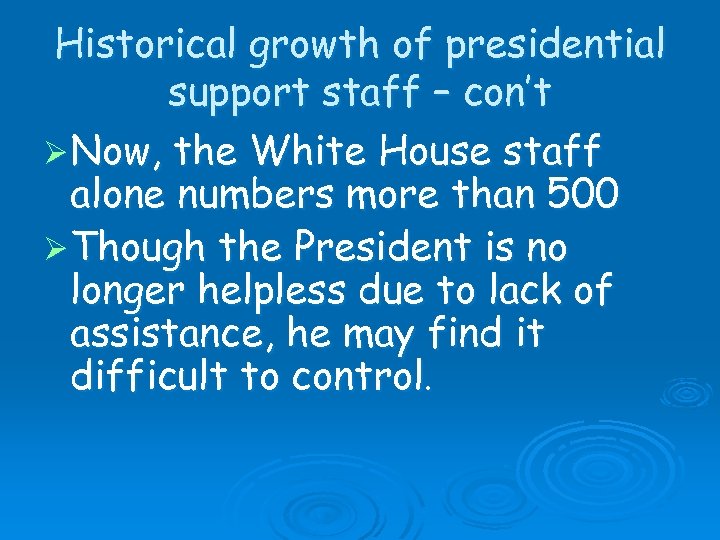 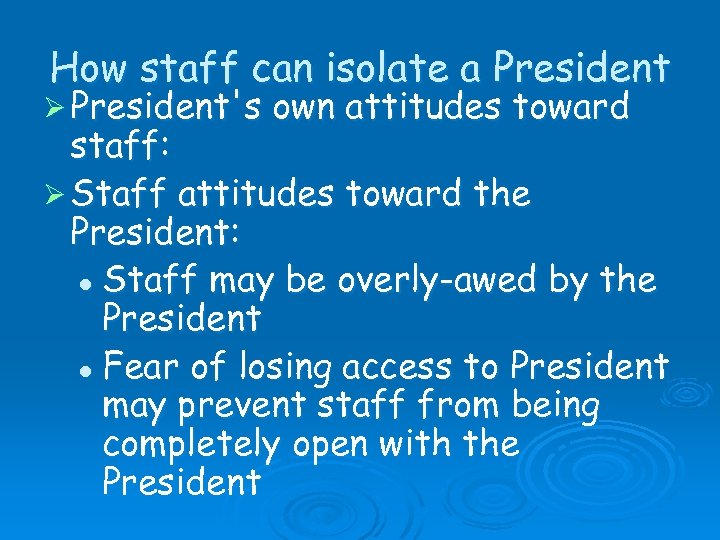 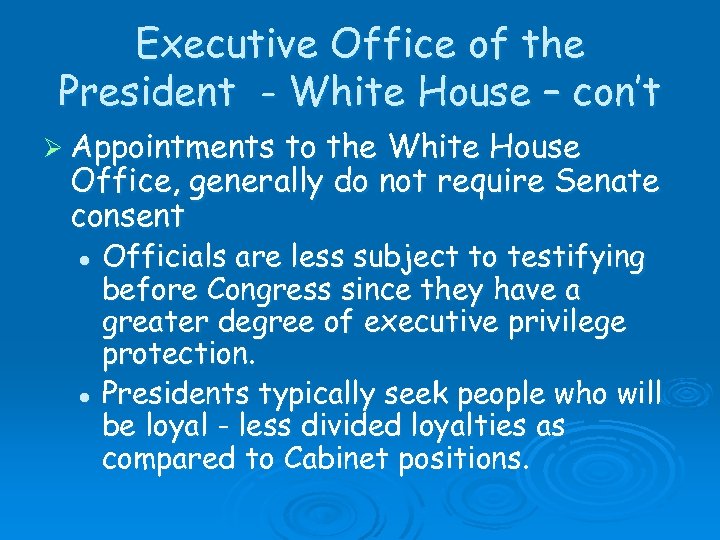 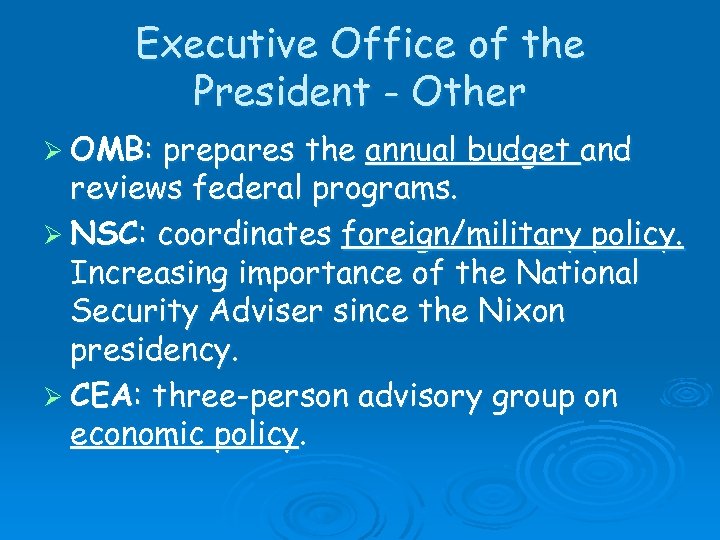 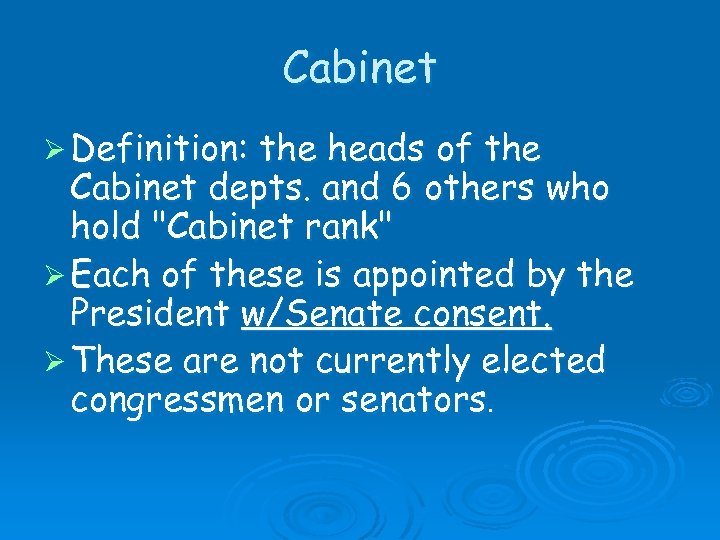 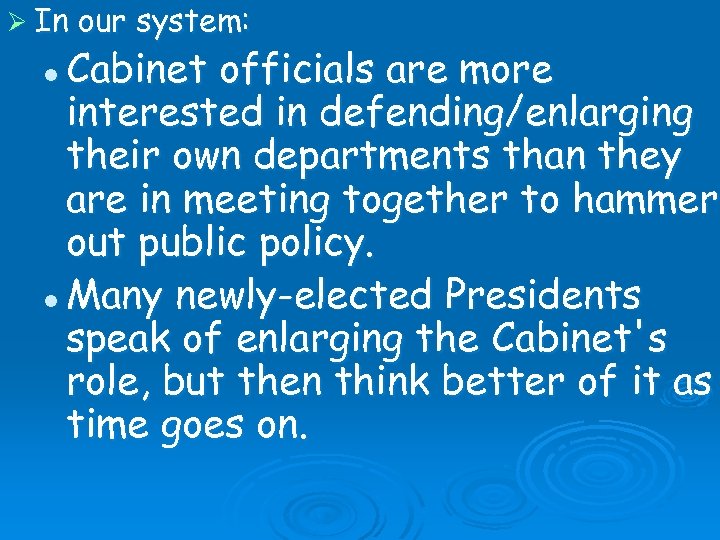 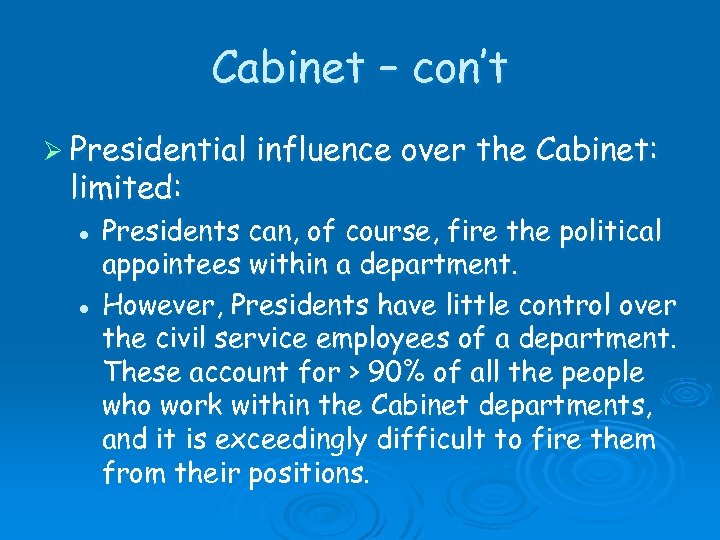 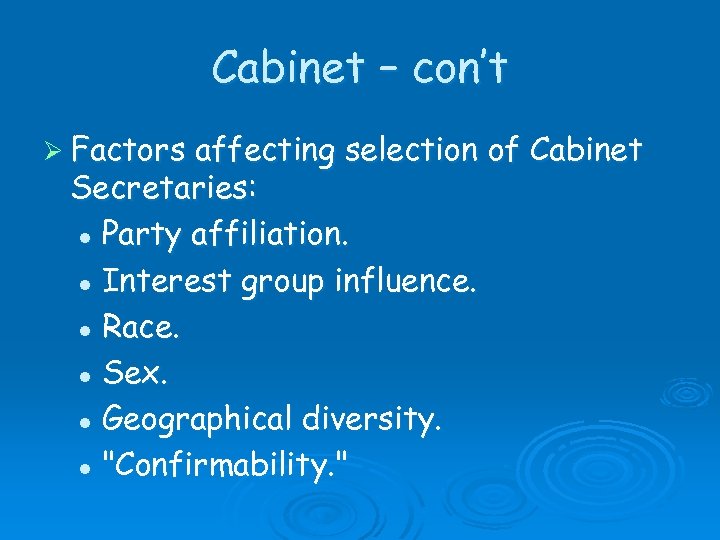 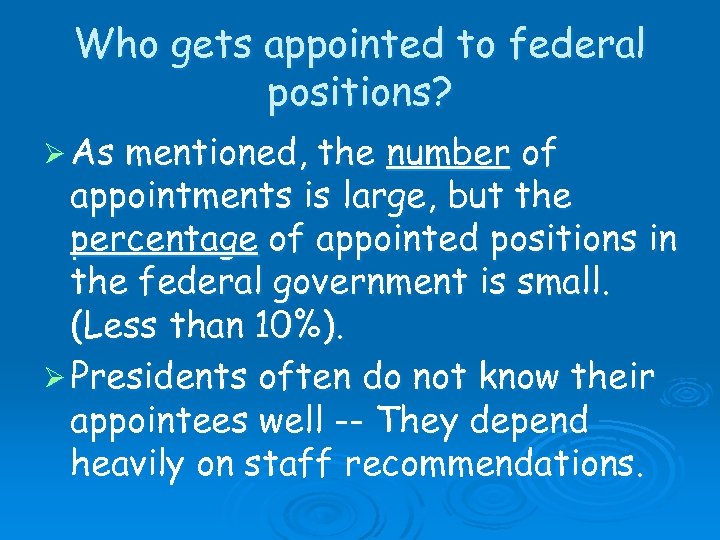 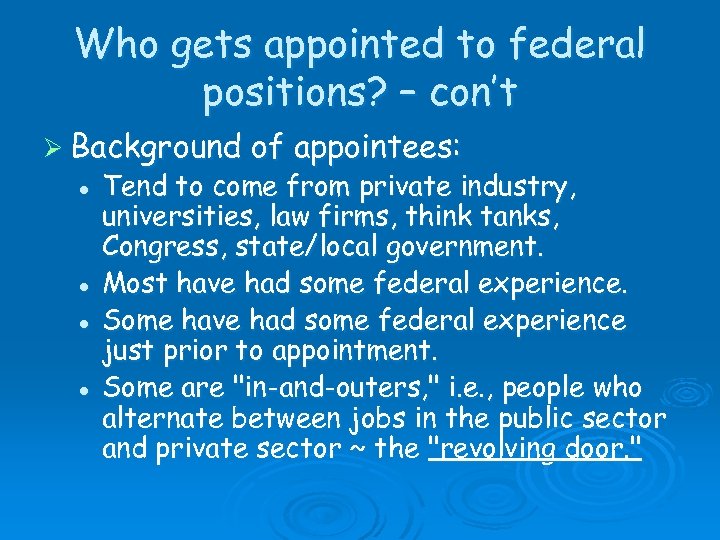 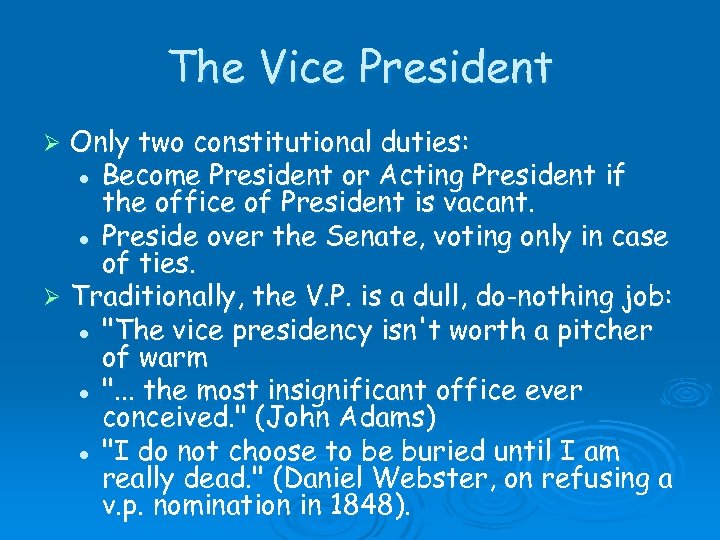 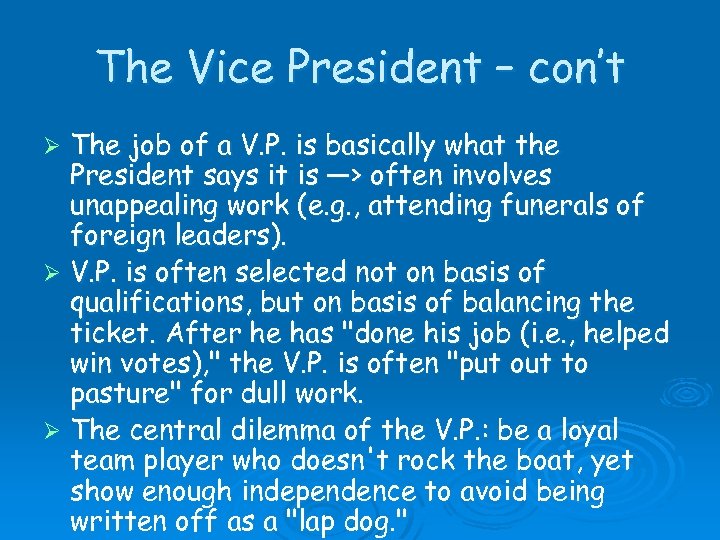 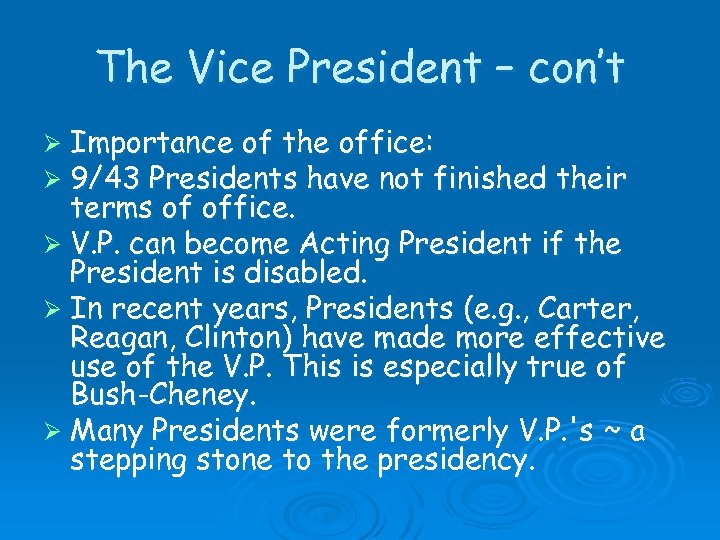 Скачать презентацию PRESIDENTIAL SUPPORT STAFF So you wanna work for

PRESIDENTIAL SUPPORT STAFF So you wanna work for the President? ? ?

Historical growth of presidential support staff Ø In the past. . . l Not until 1857 that a President was provided with a personal secretary. l Lincoln often answered his own mail. l Cleveland personally answered the White House telephone. l Not until 1901 that the President was given Secret Service protection.

Historical growth of presidential support staff – con’t Ø Now, the White House staff alone numbers more than 500 Ø Though the President is no longer helpless due to lack of assistance, he may find it difficult to control.

Executive Office of the President - White House – con’t Ø Appointments to the White House Office, generally do not require Senate consent l l Officials are less subject to testifying before Congress since they have a greater degree of executive privilege protection. Presidents typically seek people who will be loyal - less divided loyalties as compared to Cabinet positions.

Cabinet Ø Definition: the heads of the Cabinet depts. and 6 others who hold "Cabinet rank" Ø Each of these is appointed by the President w/Senate consent. Ø These are not currently elected congressmen or senators.

Ø In our system: Cabinet officials are more interested in defending/enlarging their own departments than they are in meeting together to hammer out public policy. l Many newly-elected Presidents speak of enlarging the Cabinet's role, but then think better of it as time goes on. l

Cabinet – con’t Ø Presidential limited: l l influence over the Cabinet: Presidents can, of course, fire the political appointees within a department. However, Presidents have little control over the civil service employees of a department. These account for > 90% of all the people who work within the Cabinet departments, and it is exceedingly difficult to fire them from their positions.

Who gets appointed to federal positions? Ø As mentioned, the number of appointments is large, but the percentage of appointed positions in the federal government is small. (Less than 10%). Ø Presidents often do not know their appointees well -- They depend heavily on staff recommendations.

Who gets appointed to federal positions? – con’t Ø Background l l of appointees: Tend to come from private industry, universities, law firms, think tanks, Congress, state/local government. Most have had some federal experience. Some have had some federal experience just prior to appointment. Some are "in-and-outers, " i. e. , people who alternate between jobs in the public sector and private sector ~ the "revolving door. "

The Vice President Only two constitutional duties: l Become President or Acting President if the office of President is vacant. l Preside over the Senate, voting only in case of ties. Ø Traditionally, the V. P. is a dull, do-nothing job: l "The vice presidency isn't worth a pitcher of warm l ". . . the most insignificant office ever conceived. " (John Adams) l "I do not choose to be buried until I am really dead. " (Daniel Webster, on refusing a v. p. nomination in 1848). Ø

The Vice President – con’t The job of a V. P. is basically what the President says it is —> often involves unappealing work (e. g. , attending funerals of foreign leaders). Ø V. P. is often selected not on basis of qualifications, but on basis of balancing the ticket. After he has "done his job (i. e. , helped win votes), " the V. P. is often "put out to pasture" for dull work. Ø The central dilemma of the V. P. : be a loyal team player who doesn't rock the boat, yet show enough independence to avoid being written off as a "lap dog. " Ø

The Vice President – con’t Ø Importance of the office: Ø 9/43 Presidents have not finished their terms of office. Ø V. P. can become Acting President if the President is disabled. Ø In recent years, Presidents (e. g. , Carter, Reagan, Clinton) have made more effective use of the V. P. This is especially true of Bush-Cheney. Ø Many Presidents were formerly V. P. 's ~ a stepping stone to the presidency.