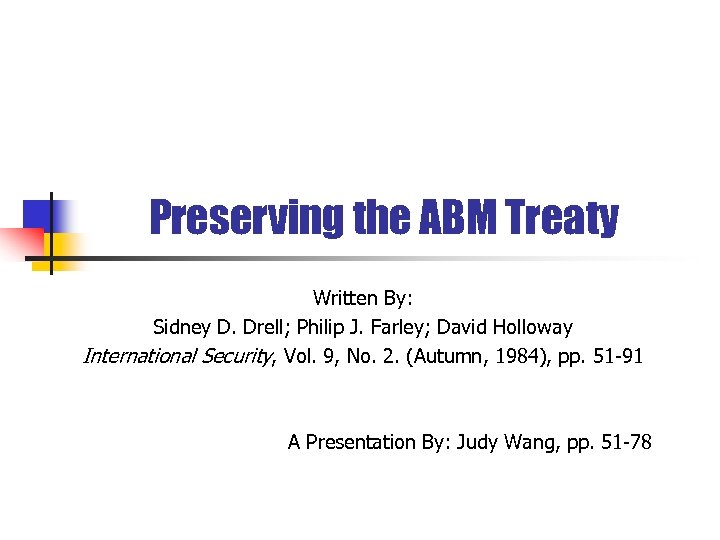 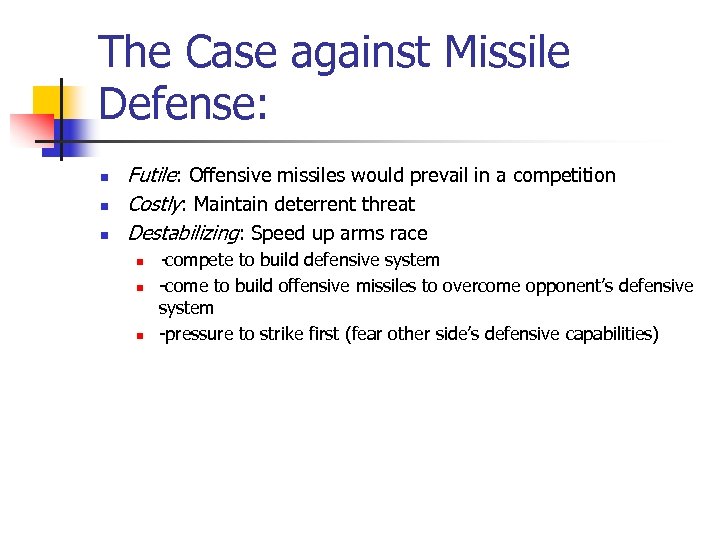 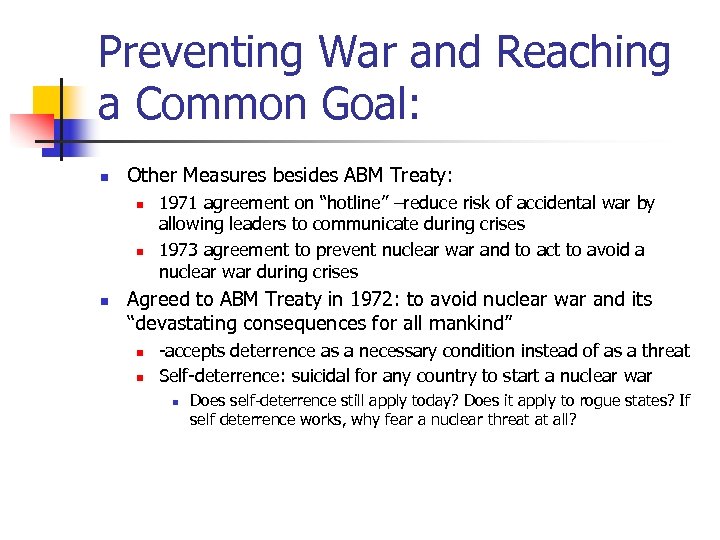 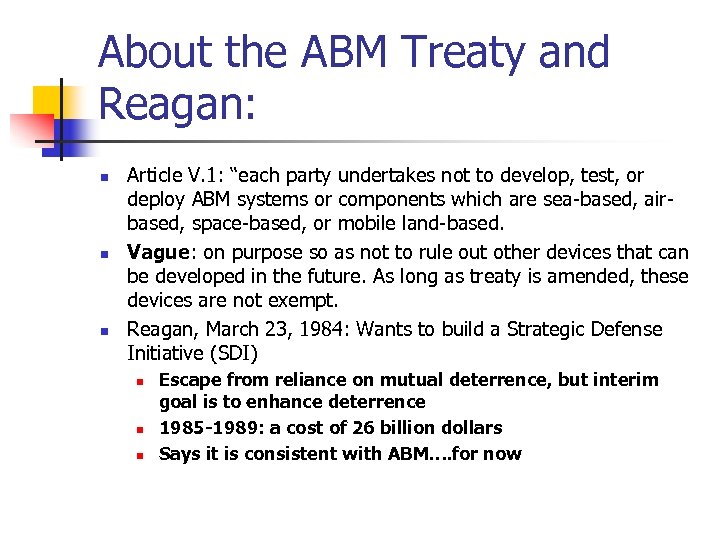 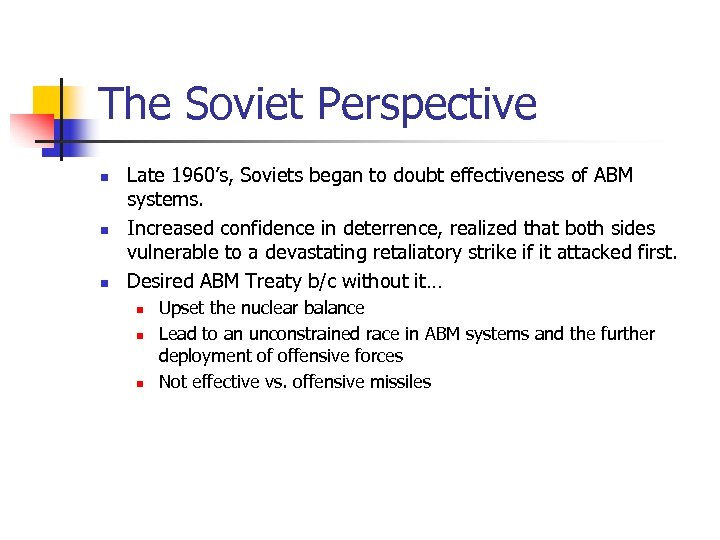 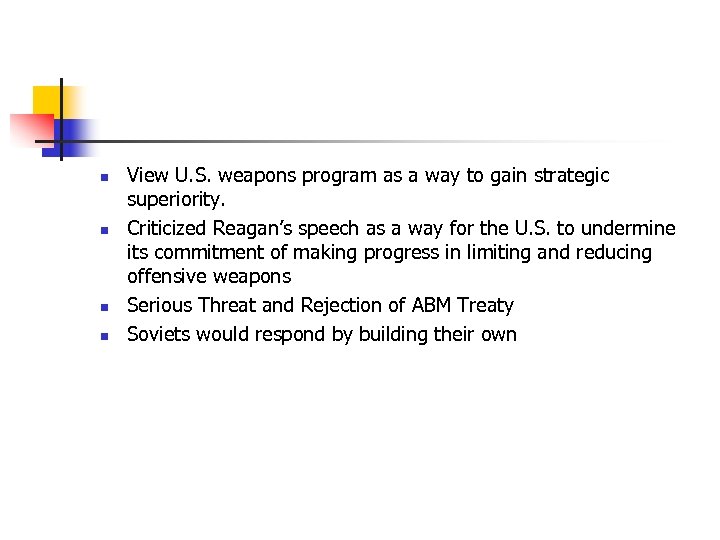 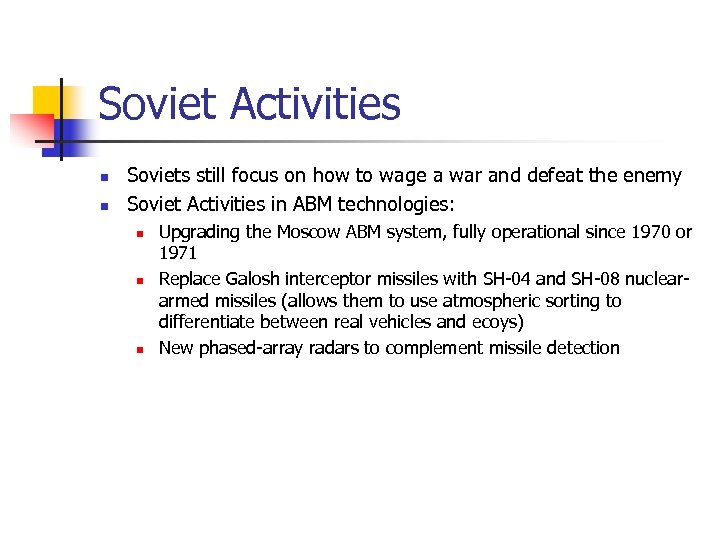 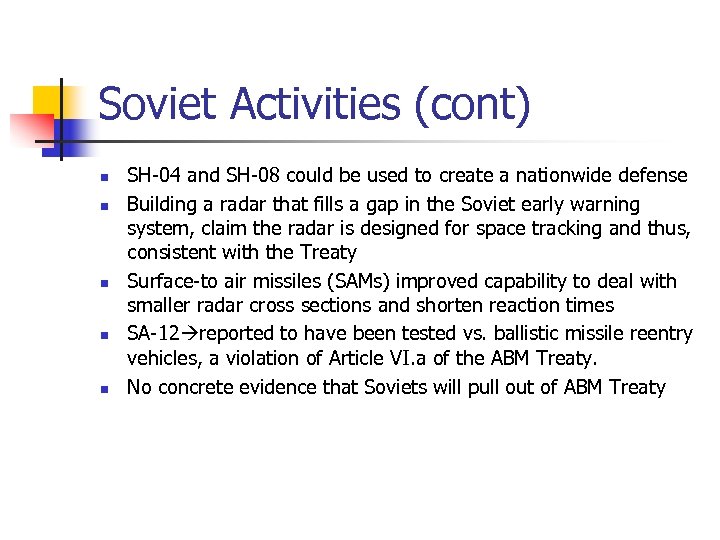 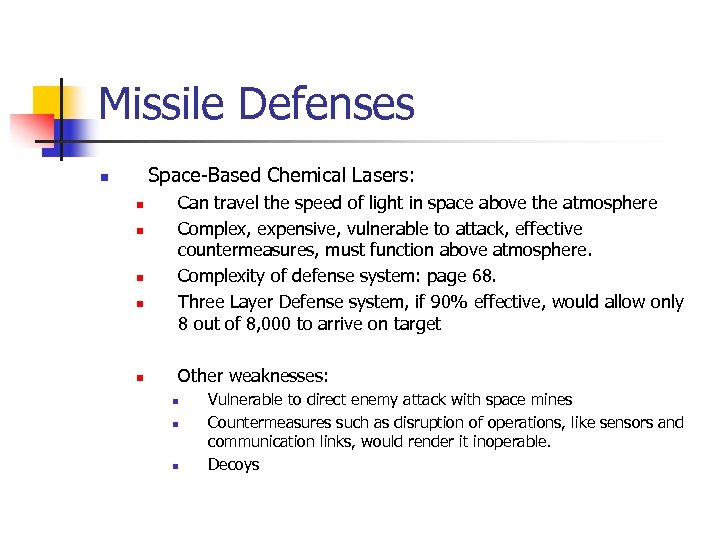 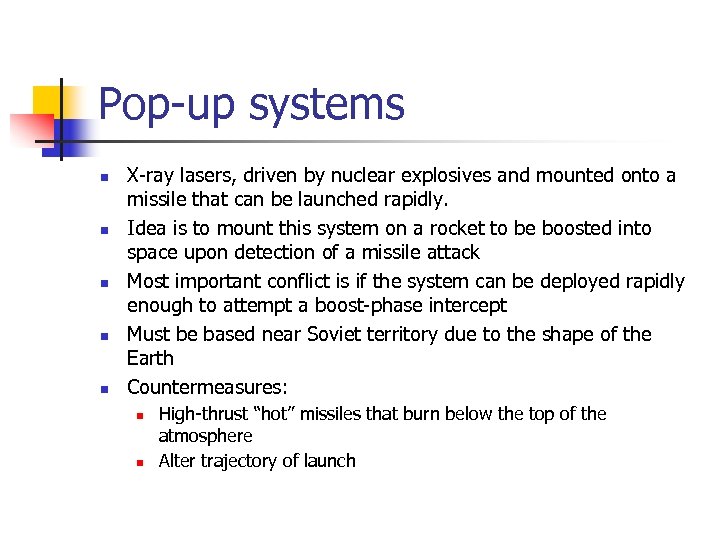 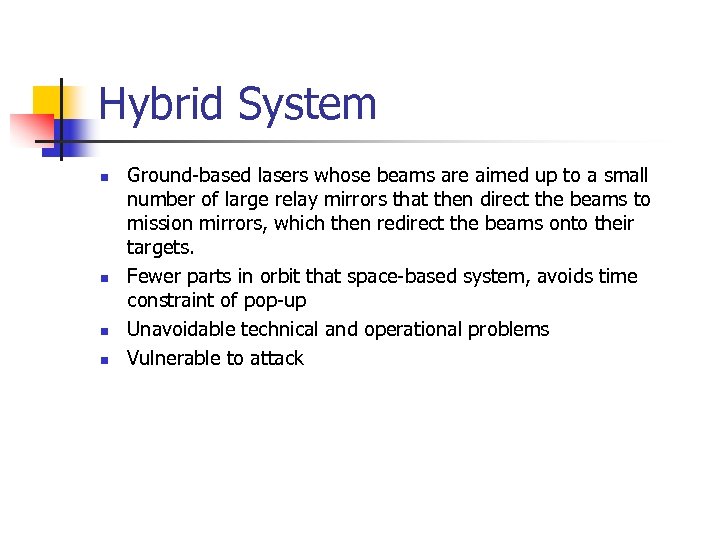 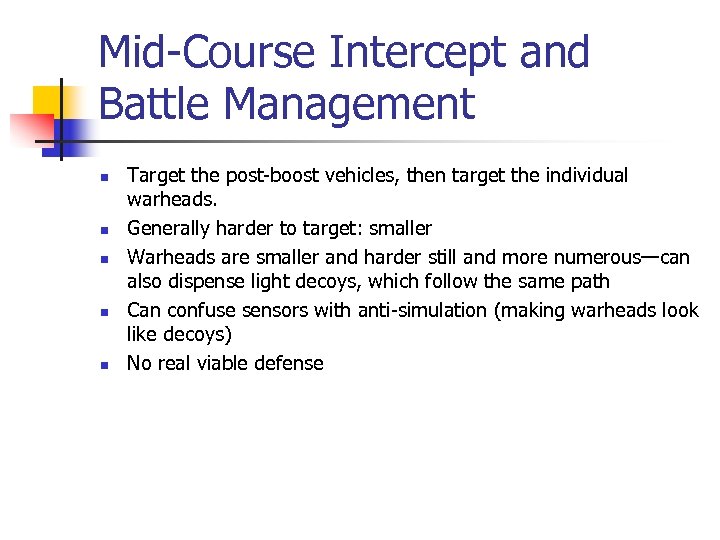 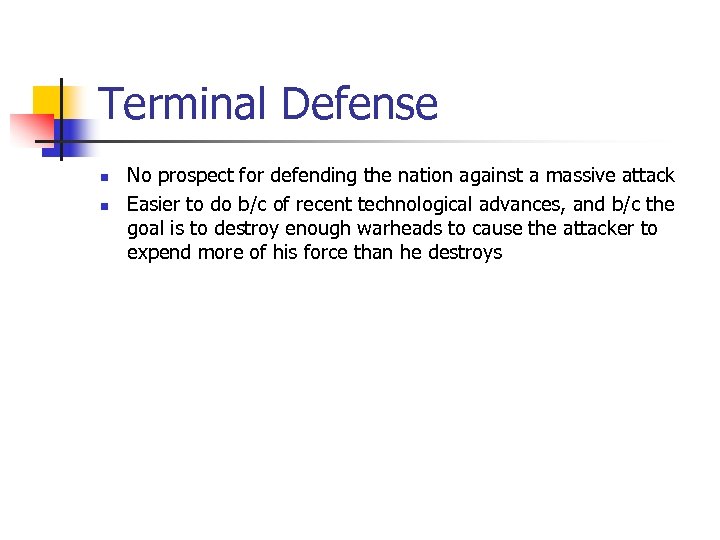 Preventing War and Reaching a Common Goal: n Other Measures besides ABM Treaty: n n n 1971 agreement on “hotline” –reduce risk of accidental war by allowing leaders to communicate during crises 1973 agreement to prevent nuclear war and to act to avoid a nuclear war during crises Agreed to ABM Treaty in 1972: to avoid nuclear war and its “devastating consequences for all mankind” n n -accepts deterrence as a necessary condition instead of as a threat Self-deterrence: suicidal for any country to start a nuclear war n Does self-deterrence still apply today? Does it apply to rogue states? If self deterrence works, why fear a nuclear threat at all?

About the ABM Treaty and Reagan: n n n Article V. 1: “each party undertakes not to develop, test, or deploy ABM systems or components which are sea-based, airbased, space-based, or mobile land-based. Vague: on purpose so as not to rule out other devices that can be developed in the future. As long as treaty is amended, these devices are not exempt. Reagan, March 23, 1984: Wants to build a Strategic Defense Initiative (SDI) n n n Escape from reliance on mutual deterrence, but interim goal is to enhance deterrence 1985 -1989: a cost of 26 billion dollars Says it is consistent with ABM…. for now

The Soviet Perspective n n n Late 1960’s, Soviets began to doubt effectiveness of ABM systems. Increased confidence in deterrence, realized that both sides vulnerable to a devastating retaliatory strike if it attacked first. Desired ABM Treaty b/c without it… n n n Upset the nuclear balance Lead to an unconstrained race in ABM systems and the further deployment of offensive forces Not effective vs. offensive missiles

n n View U. S. weapons program as a way to gain strategic superiority. Criticized Reagan’s speech as a way for the U. S. to undermine its commitment of making progress in limiting and reducing offensive weapons Serious Threat and Rejection of ABM Treaty Soviets would respond by building their own

Soviet Activities (cont) n n n SH-04 and SH-08 could be used to create a nationwide defense Building a radar that fills a gap in the Soviet early warning system, claim the radar is designed for space tracking and thus, consistent with the Treaty Surface-to air missiles (SAMs) improved capability to deal with smaller radar cross sections and shorten reaction times SA-12 reported to have been tested vs. ballistic missile reentry vehicles, a violation of Article VI. a of the ABM Treaty. No concrete evidence that Soviets will pull out of ABM Treaty

Missile Defenses Space-Based Chemical Lasers: n n n Can travel the speed of light in space above the atmosphere Complex, expensive, vulnerable to attack, effective countermeasures, must function above atmosphere. Complexity of defense system: page 68. Three Layer Defense system, if 90% effective, would allow only 8 out of 8, 000 to arrive on target Other weaknesses: n n n Vulnerable to direct enemy attack with space mines Countermeasures such as disruption of operations, like sensors and communication links, would render it inoperable. Decoys

Pop-up systems n n n X-ray lasers, driven by nuclear explosives and mounted onto a missile that can be launched rapidly. Idea is to mount this system on a rocket to be boosted into space upon detection of a missile attack Most important conflict is if the system can be deployed rapidly enough to attempt a boost-phase intercept Must be based near Soviet territory due to the shape of the Earth Countermeasures: n n High-thrust “hot” missiles that burn below the top of the atmosphere Alter trajectory of launch

Hybrid System n n Ground-based lasers whose beams are aimed up to a small number of large relay mirrors that then direct the beams to mission mirrors, which then redirect the beams onto their targets. Fewer parts in orbit that space-based system, avoids time constraint of pop-up Unavoidable technical and operational problems Vulnerable to attack

Terminal Defense n n No prospect for defending the nation against a massive attack Easier to do b/c of recent technological advances, and b/c the goal is to destroy enough warheads to cause the attacker to expend more of his force than he destroys