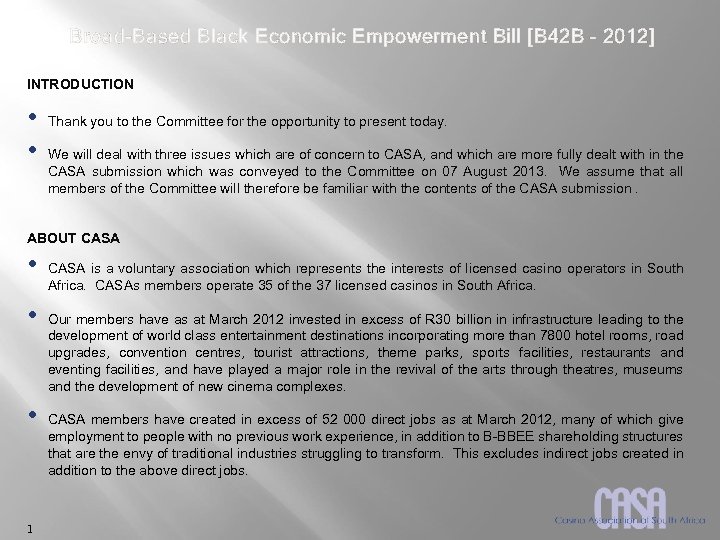 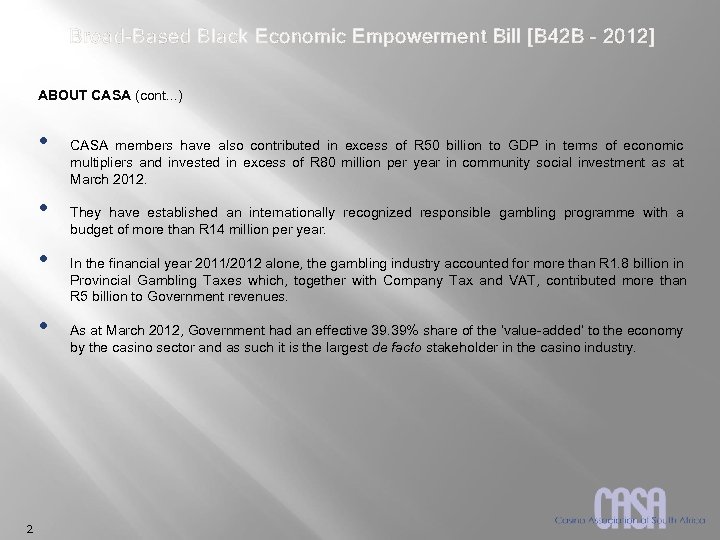 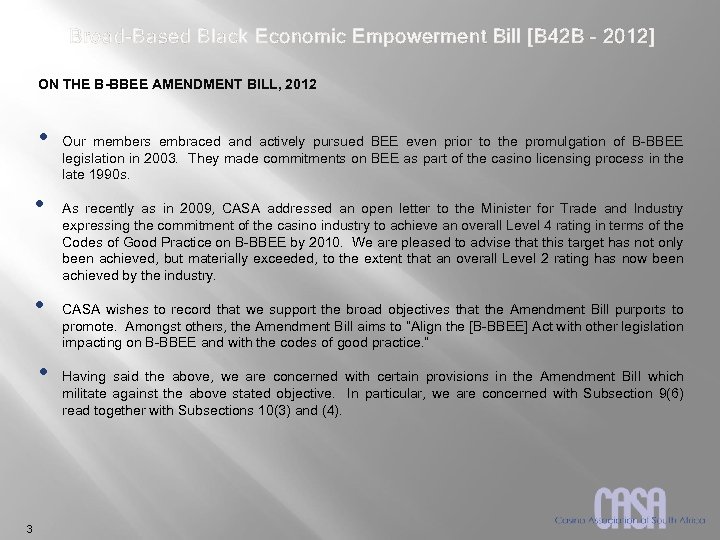 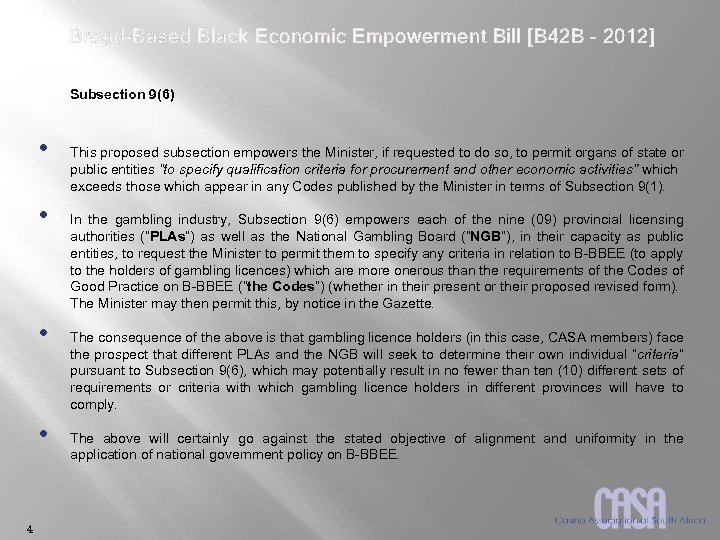 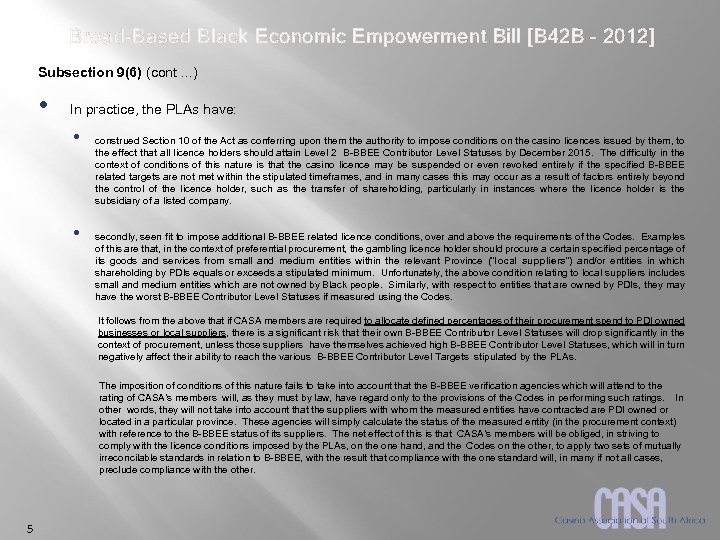 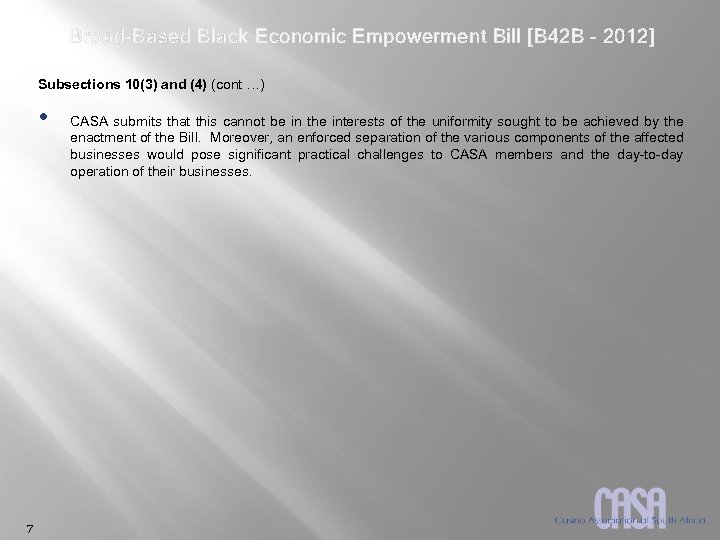 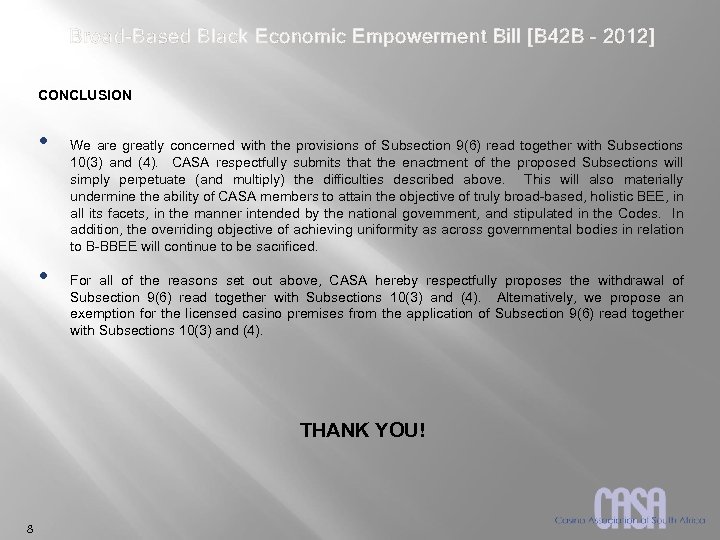 Presentation by Adv. Themba Ngobese, CEO of the Casino Association of South Africa to the 11 September 2013

Broad-Based Black Economic Empowerment Bill [B 42 B – 2012] INTRODUCTION • • Thank you to the Committee for the opportunity to present today. We will deal with three issues which are of concern to CASA, and which are more fully dealt with in the CASA submission which was conveyed to the Committee on 07 August 2013. We assume that all members of the Committee will therefore be familiar with the contents of the CASA submission. ABOUT CASA • • • 1 CASA is a voluntary association which represents the interests of licensed casino operators in South Africa. CASAs members operate 35 of the 37 licensed casinos in South Africa. Our members have as at March 2012 invested in excess of R 30 billion in infrastructure leading to the development of world class entertainment destinations incorporating more than 7800 hotel rooms, road upgrades, convention centres, tourist attractions, theme parks, sports facilities, restaurants and eventing facilities, and have played a major role in the revival of the arts through theatres, museums and the development of new cinema complexes. CASA members have created in excess of 52 000 direct jobs as at March 2012, many of which give employment to people with no previous work experience, in addition to B-BBEE shareholding structures that are the envy of traditional industries struggling to transform. This excludes indirect jobs created in addition to the above direct jobs.

Broad-Based Black Economic Empowerment Bill [B 42 B – 2012] ABOUT CASA (cont. . . ) • • 2 CASA members have also contributed in excess of R 50 billion to GDP in terms of economic multipliers and invested in excess of R 80 million per year in community social investment as at March 2012. They have established an internationally recognized responsible gambling programme with a budget of more than R 14 million per year. In the financial year 2011/2012 alone, the gambling industry accounted for more than R 1. 8 billion in Provincial Gambling Taxes which, together with Company Tax and VAT, contributed more than R 5 billion to Government revenues. As at March 2012, Government had an effective 39. 39% share of the ‘value-added’ to the economy by the casino sector and as such it is the largest de facto stakeholder in the casino industry.

Broad-Based Black Economic Empowerment Bill [B 42 B – 2012] ON THE B-BBEE AMENDMENT BILL, 2012 • • 3 Our members embraced and actively pursued BEE even prior to the promulgation of B-BBEE legislation in 2003. They made commitments on BEE as part of the casino licensing process in the late 1990 s. As recently as in 2009, CASA addressed an open letter to the Minister for Trade and Industry expressing the commitment of the casino industry to achieve an overall Level 4 rating in terms of the Codes of Good Practice on B-BBEE by 2010. We are pleased to advise that this target has not only been achieved, but materially exceeded, to the extent that an overall Level 2 rating has now been achieved by the industry. CASA wishes to record that we support the broad objectives that the Amendment Bill purports to promote. Amongst others, the Amendment Bill aims to “Align the [B-BBEE] Act with other legislation impacting on B-BBEE and with the codes of good practice. ” Having said the above, we are concerned with certain provisions in the Amendment Bill which militate against the above stated objective. In particular, we are concerned with Subsection 9(6) read together with Subsections 10(3) and (4).

Broad-Based Black Economic Empowerment Bill [B 42 B – 2012] Subsection 9(6) • • 4 This proposed subsection empowers the Minister, if requested to do so, to permit organs of state or public entities “to specify qualification criteria for procurement and other economic activities” which exceeds those which appear in any Codes published by the Minister in terms of Subsection 9(1). In the gambling industry, Subsection 9(6) empowers each of the nine (09) provincial licensing authorities (“PLAs”) as well as the National Gambling Board (“NGB“), in their capacity as public entities, to request the Minister to permit them to specify any criteria in relation to B-BBEE (to apply to the holders of gambling licences) which are more onerous than the requirements of the Codes of Good Practice on B-BBEE (“the Codes”) (whether in their present or their proposed revised form). The Minister may then permit this, by notice in the Gazette. The consequence of the above is that gambling licence holders (in this case, CASA members) face the prospect that different PLAs and the NGB will seek to determine their own individual “criteria” pursuant to Subsection 9(6), which may potentially result in no fewer than ten (10) different sets of requirements or criteria with which gambling licence holders in different provinces will have to comply. The above will certainly go against the stated objective of alignment and uniformity in the application of national government policy on B-BBEE.

Broad-Based Black Economic Empowerment Bill [B 42 B – 2012] Subsection 9(6) (cont. . . ) • In practice, the PLAs have: • • construed Section 10 of the Act as conferring upon them the authority to impose conditions on the casino licences issued by them, to the effect that all licence holders should attain Level 2 B-BBEE Contributor Level Statuses by December 2015. The difficulty in the context of conditions of this nature is that the casino licence may be suspended or even revoked entirely if the specified B-BBEE related targets are not met within the stipulated timeframes, and in many cases this may occur as a result of factors entirely beyond the control of the licence holder, such as the transfer of shareholding, particularly in instances where the licence holder is the subsidiary of a listed company. secondly, seen fit to impose additional B-BBEE related licence conditions, over and above the requirements of the Codes. Examples of this are that, in the context of preferential procurement, the gambling licence holder should procure a certain specified percentage of its goods and services from small and medium entities within the relevant Province (“local suppliers”) and/or entities in which shareholding by PDIs equals or exceeds a stipulated minimum. Unfortunately, the above condition relating to local suppliers includes small and medium entities which are not owned by Black people. Similarly, with respect to entities that are owned by PDIs, they may have the worst B-BBEE Contributor Level Statuses if measured using the Codes. It follows from the above that if CASA members are required to allocate defined percentages of their procurement spend to PDI owned businesses or local suppliers, there is a significant risk that their own B-BBEE Contributor Level Statuses will drop significantly in the context of procurement, unless those suppliers have themselves achieved high B-BBEE Contributor Level Statuses, which will in turn negatively affect their ability to reach the various B-BBEE Contributor Level Targets stipulated by the PLAs. The imposition of conditions of this nature fails to take into account that the B-BBEE verification agencies which will attend to the rating of CASA’s members will, as they must by law, have regard only to the provisions of the Codes in performing such ratings. In other words, they will not take into account that the suppliers with whom the measured entities have contracted are PDI owned or located in a particular province. These agencies will simply calculate the status of the measured entity (in the procurement context) with reference to the B-BBEE status of its suppliers. The net effect of this is that CASA’s members will be obliged, in striving to comply with the licence conditions imposed by the PLAs, on the one hand, and the Codes on the other, to apply two sets of mutually irreconcilable standards in relation to B-BBEE, with the result that compliance with the one standard will, in many if not all cases, preclude compliance with the other. 5

Broad-Based Black Economic Empowerment Bill [B 42 B – 2012] Subsections 10(3) and (4) • • 6 We fear that the overarching objective of uniformity in the application of national government policy on B-BBEE will similarly be lost if the required degree of clarity is not provided regarding the above provisions. In conjunction with their licensed casinos, CASA members operate hotels, resort properties, timeshare facilities, restaurants and conferencing and other tourist facilities, as part and parcel of the integrated resorts required to be put in place in order to qualify for their casino licences. The import of the proposed Subsection 10(3) is that casinos should be measured only against the requirements of the Tourism Sector Code due to the tourism related components of their casino developments despite the fact that casinos generate most of their revenues from casino operations. This will create significant difficulties for CASA members, as the various PLAs require CASA members to be evaluated against the Generic Scorecard set up by the Codes. Additionally, in the event that the tourism components of the relevant businesses were required to be separated from the casino components for the purposes of B-BBEE compliance, CASA members would find themselves subject to no less than three (03) different reporting obligations to be satisfied to different entities in relation to the same B-BBEE measured entity (albeit it has the same shareholders, directors, managers, personnel and revenues), namely one report to the Tourism Sector Council on compliance with the Tourism Sector Code, another to the relevant PLAs in respect of compliance with the Generic scorecard, and a third, also to the PLAs, in respect of compliance with the BEE related conditions of licence which have been imposed by those PLAs, over and above the provisions of the Codes.

Broad-Based Black Economic Empowerment Bill [B 42 B – 2012] Subsections 10(3) and (4) (cont …) • 7 CASA submits that this cannot be in the interests of the uniformity sought to be achieved by the enactment of the Bill. Moreover, an enforced separation of the various components of the affected businesses would pose significant practical challenges to CASA members and the day-to-day operation of their businesses.

Broad-Based Black Economic Empowerment Bill [B 42 B – 2012] CONCLUSION • • We are greatly concerned with the provisions of Subsection 9(6) read together with Subsections 10(3) and (4). CASA respectfully submits that the enactment of the proposed Subsections will simply perpetuate (and multiply) the difficulties described above. This will also materially undermine the ability of CASA members to attain the objective of truly broad-based, holistic BEE, in all its facets, in the manner intended by the national government, and stipulated in the Codes. In addition, the overriding objective of achieving uniformity as across governmental bodies in relation to B-BBEE will continue to be sacrificed. For all of the reasons set out above, CASA hereby respectfully proposes the withdrawal of Subsection 9(6) read together with Subsections 10(3) and (4). Alternatively, we propose an exemption for the licensed casino premises from the application of Subsection 9(6) read together with Subsections 10(3) and (4). THANK YOU! 8