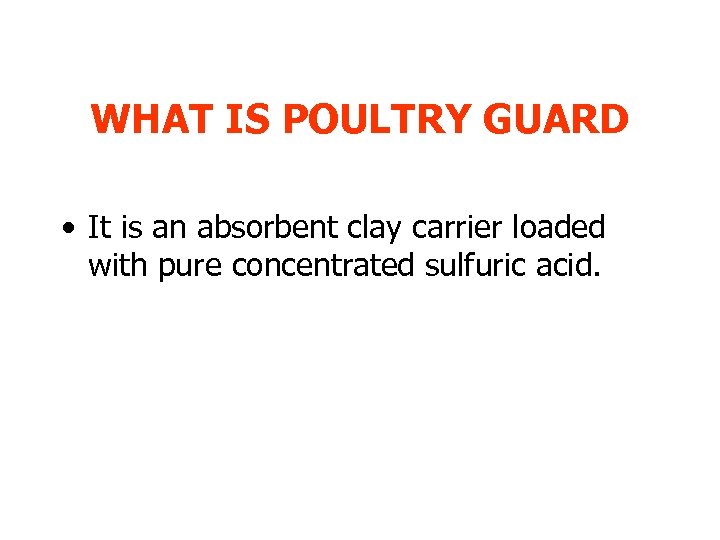 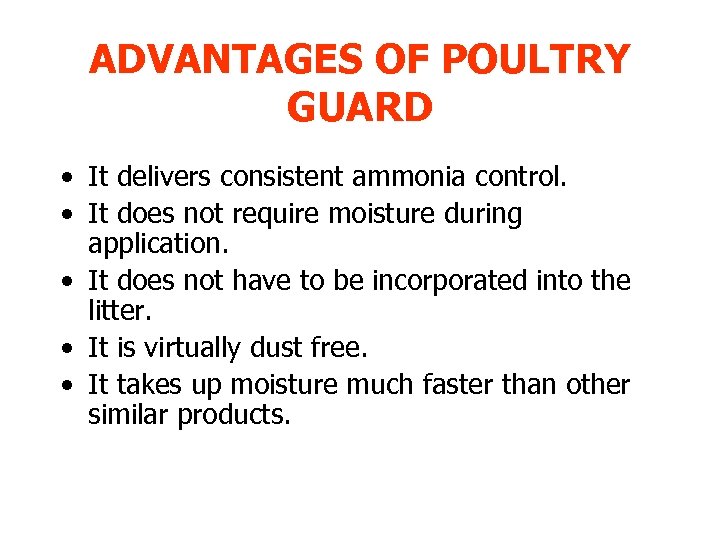 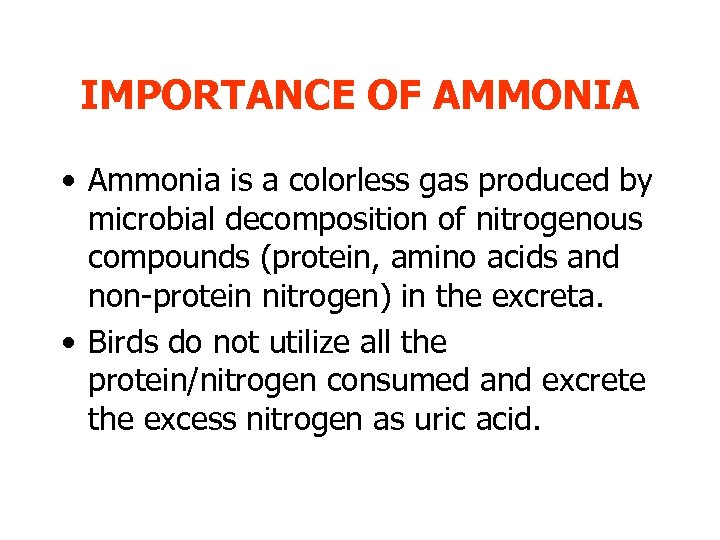 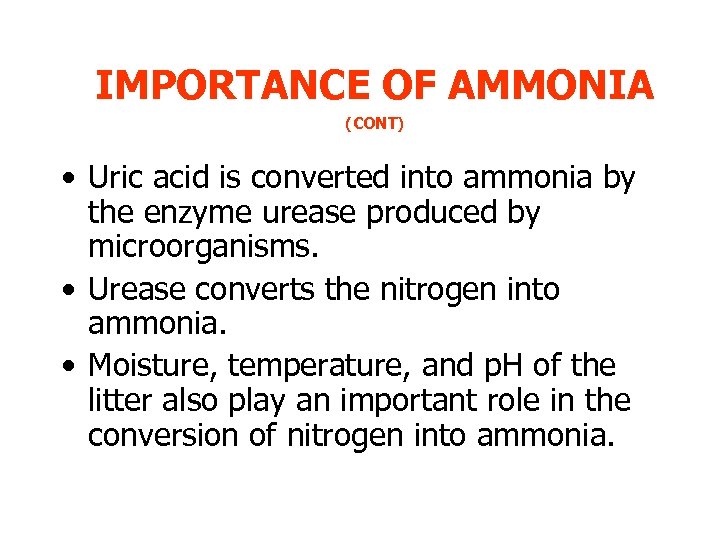 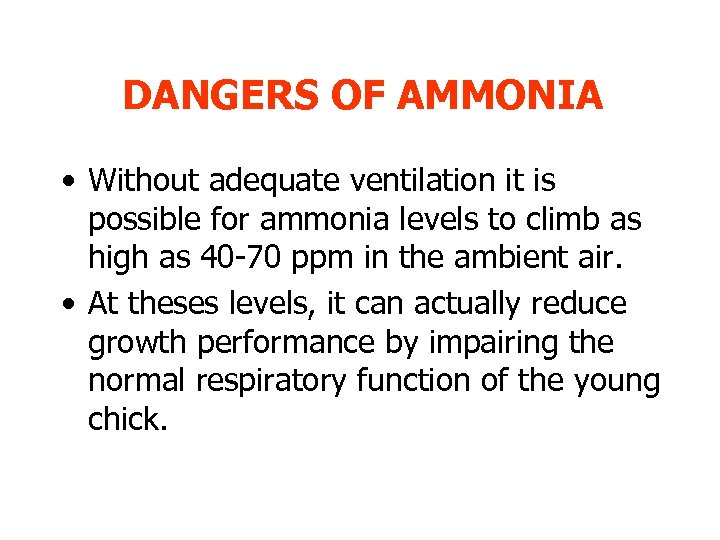 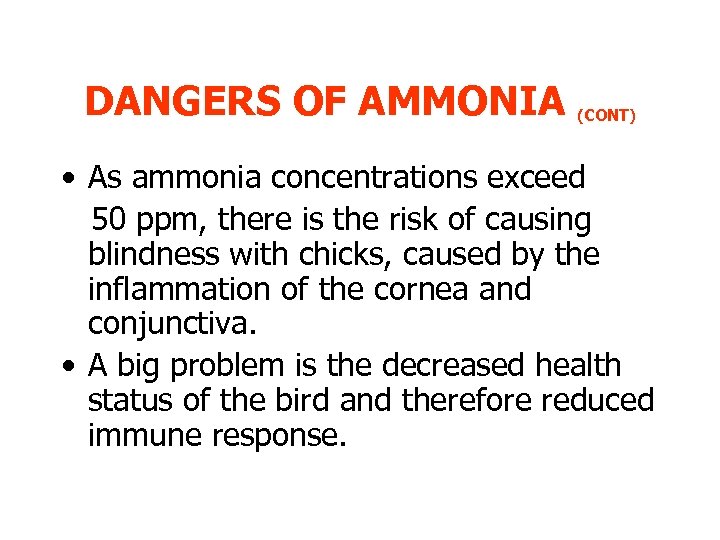 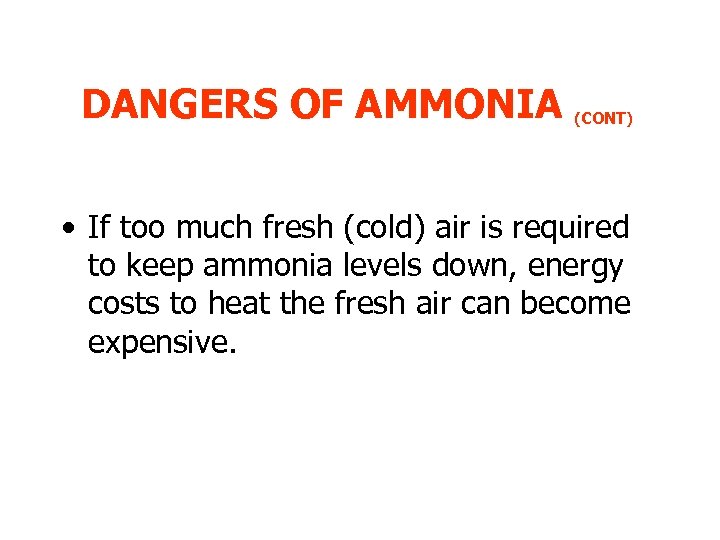 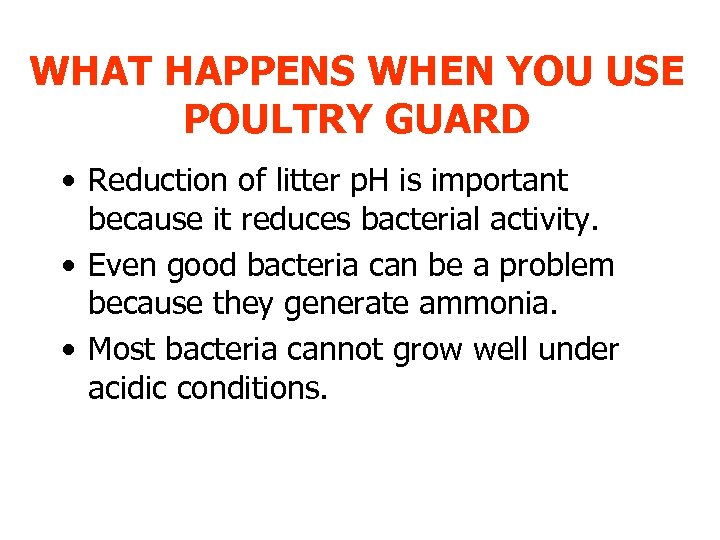 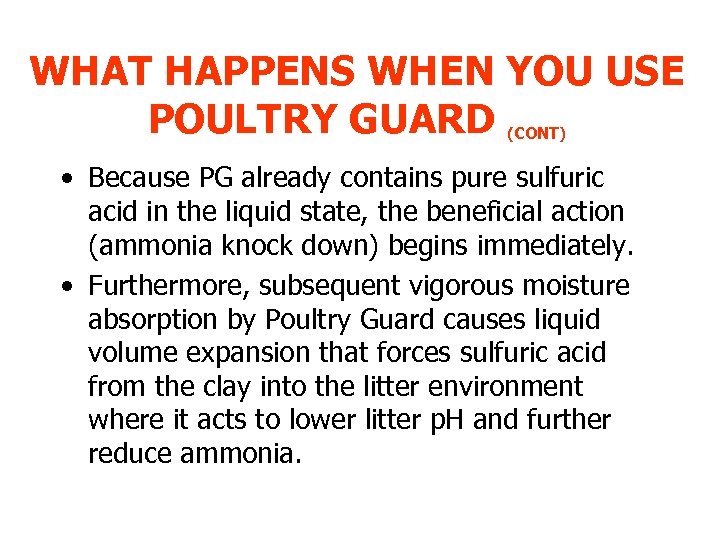 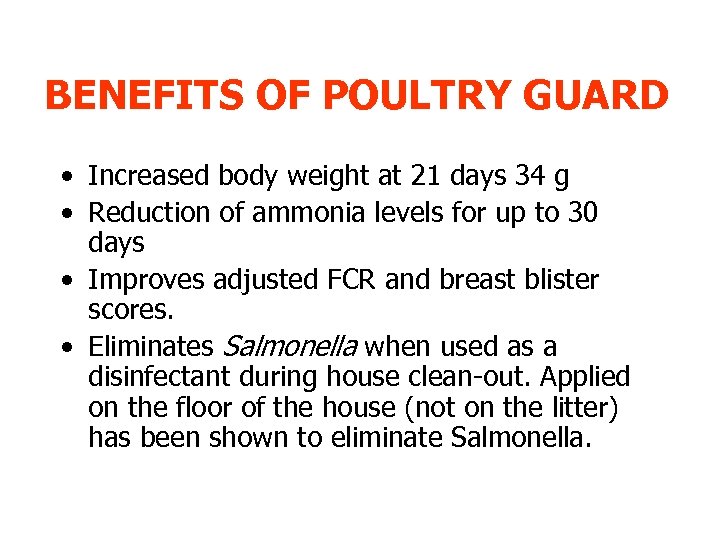 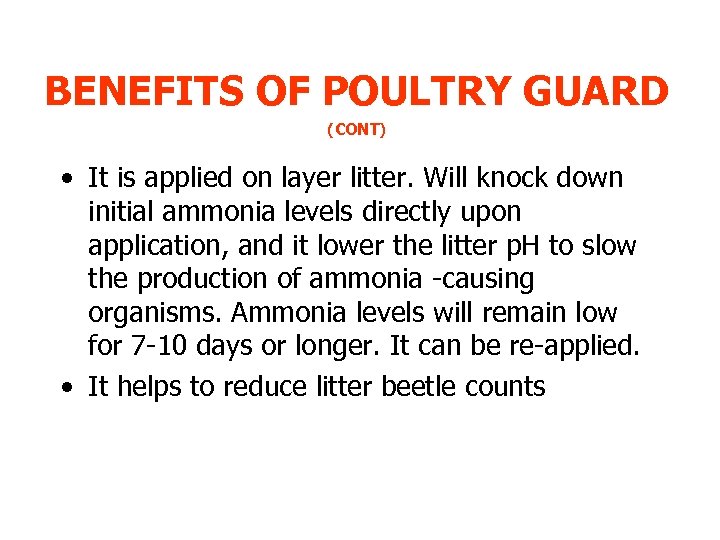 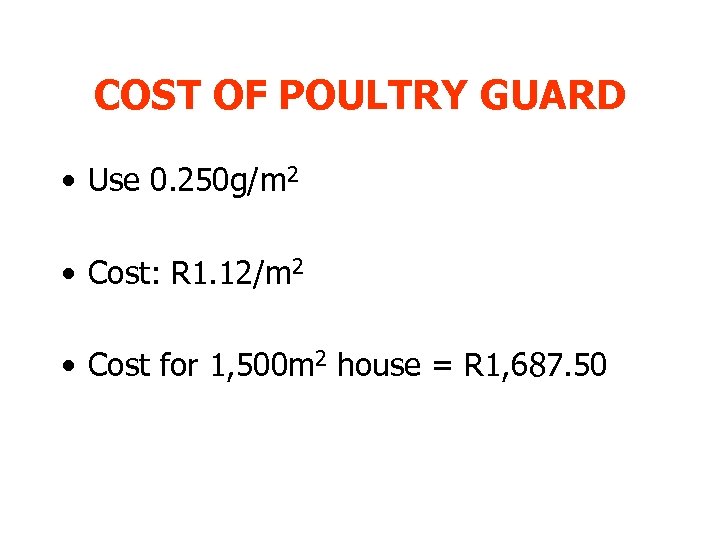 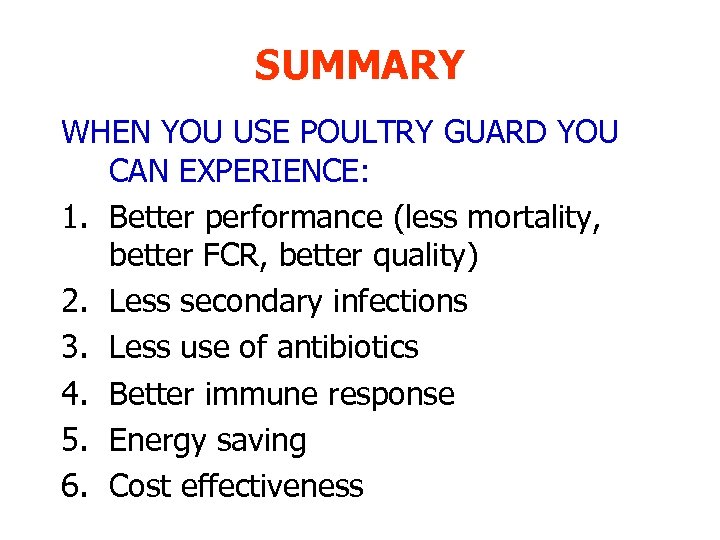 WHAT IS POULTRY GUARD • It is an absorbent clay carrier loaded with pure concentrated sulfuric acid.

ADVANTAGES OF POULTRY GUARD • It delivers consistent ammonia control. • It does not require moisture during application. • It does not have to be incorporated into the litter. • It is virtually dust free. • It takes up moisture much faster than other similar products.

HOW POULTRY GUARD WORKS It works by reducing litter p. H and by binding ammonia. It react with and neutralizes the ammonia that is released. HOW? Sulfuric acid Poultry Guard with H 2 SO 4 + Ammonia gas 2 NH 3 Ammonium sulfate (NH 4)2 SO 4 + spent clay

IMPORTANCE OF AMMONIA • Ammonia is a colorless gas produced by microbial decomposition of nitrogenous compounds (protein, amino acids and non-protein nitrogen) in the excreta. • Birds do not utilize all the protein/nitrogen consumed and excrete the excess nitrogen as uric acid.

DANGERS OF AMMONIA • Without adequate ventilation it is possible for ammonia levels to climb as high as 40 -70 ppm in the ambient air. • At theses levels, it can actually reduce growth performance by impairing the normal respiratory function of the young chick.

DANGERS OF AMMONIA (CONT) • As ammonia concentrations exceed 50 ppm, there is the risk of causing blindness with chicks, caused by the inflammation of the cornea and conjunctiva. • A big problem is the decreased health status of the bird and therefore reduced immune response.

DANGERS OF AMMONIA (CONT) • If too much fresh (cold) air is required to keep ammonia levels down, energy costs to heat the fresh air can become expensive.

WHAT HAPPENS WHEN YOU USE POULTRY GUARD • Reduction of litter p. H is important because it reduces bacterial activity. • Even good bacteria can be a problem because they generate ammonia. • Most bacteria cannot grow well under acidic conditions.

WHAT HAPPENS WHEN YOU USE POULTRY GUARD (CONT) • Because PG already contains pure sulfuric acid in the liquid state, the beneficial action (ammonia knock down) begins immediately. • Furthermore, subsequent vigorous moisture absorption by Poultry Guard causes liquid volume expansion that forces sulfuric acid from the clay into the litter environment where it acts to lower litter p. H and further reduce ammonia.

BENEFITS OF POULTRY GUARD • Increased body weight at 21 days 34 g • Reduction of ammonia levels for up to 30 days • Improves adjusted FCR and breast blister scores. • Eliminates Salmonella when used as a disinfectant during house clean-out. Applied on the floor of the house (not on the litter) has been shown to eliminate Salmonella.

BENEFITS OF POULTRY GUARD (CONT) • It is applied on layer litter. Will knock down initial ammonia levels directly upon application, and it lower the litter p. H to slow the production of ammonia -causing organisms. Ammonia levels will remain low for 7 -10 days or longer. It can be re-applied. • It helps to reduce litter beetle counts