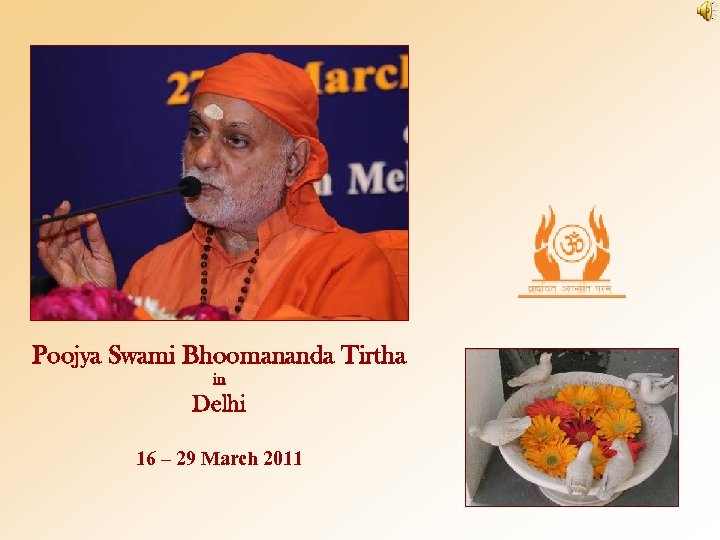 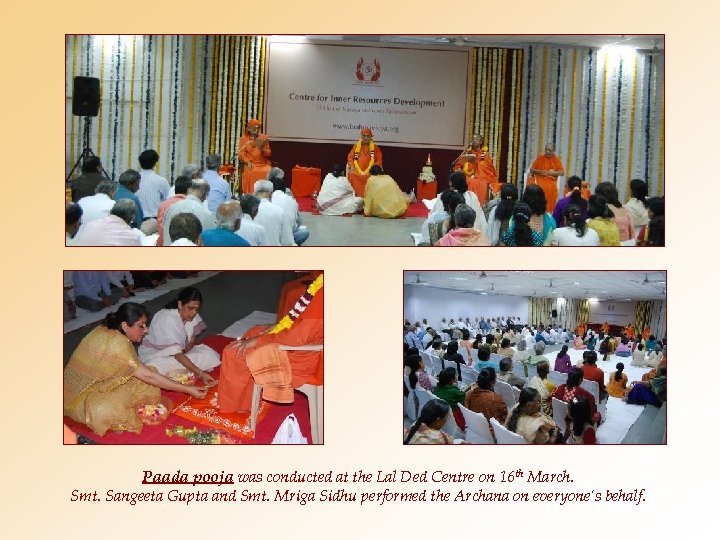 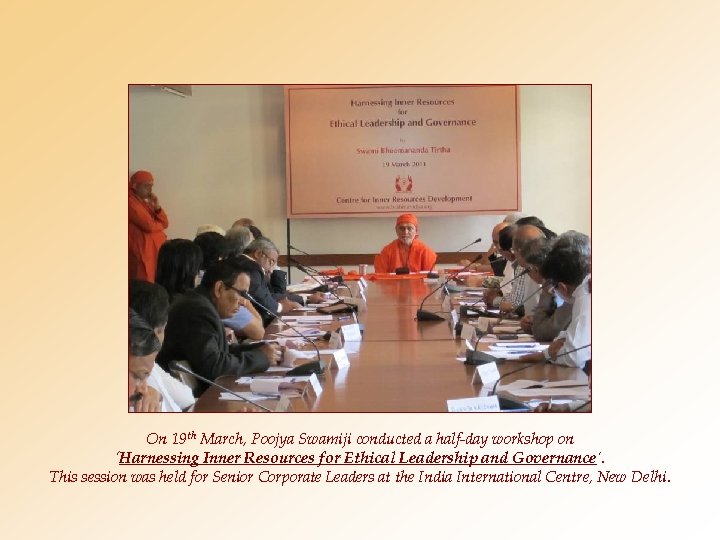 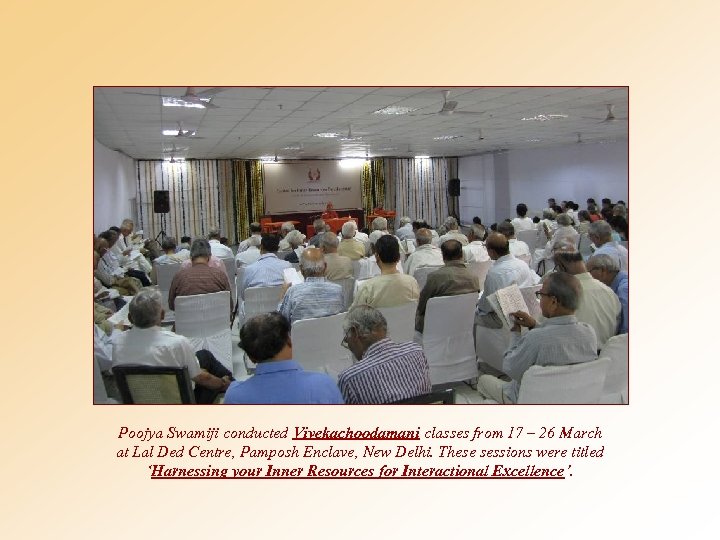 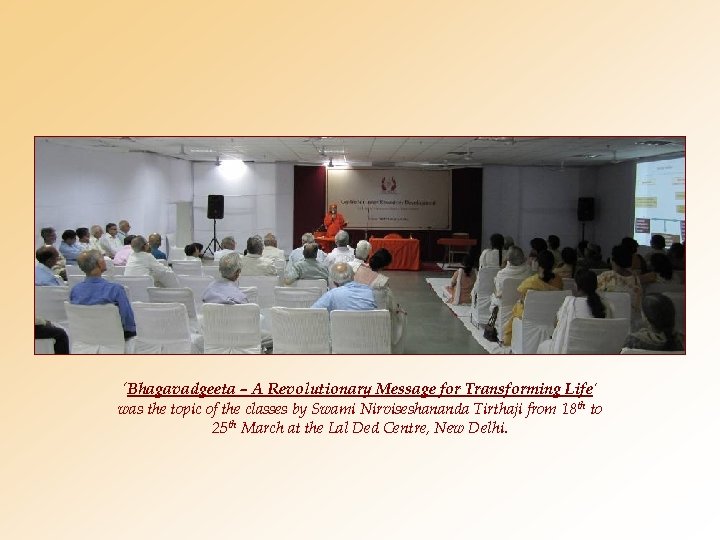 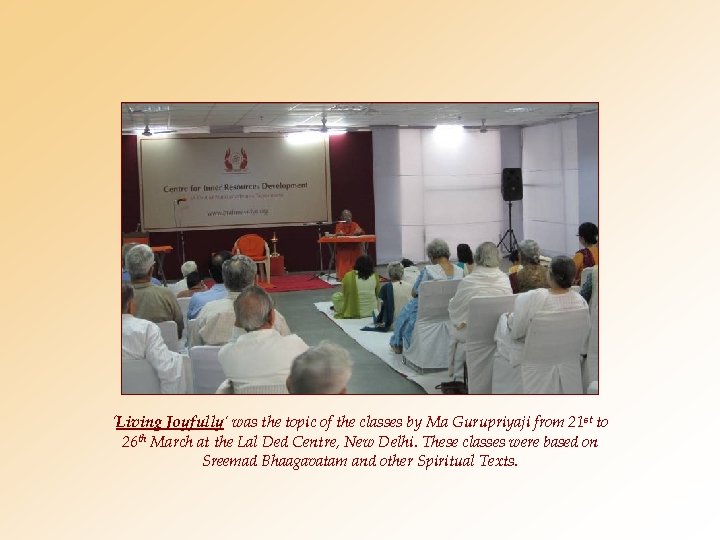 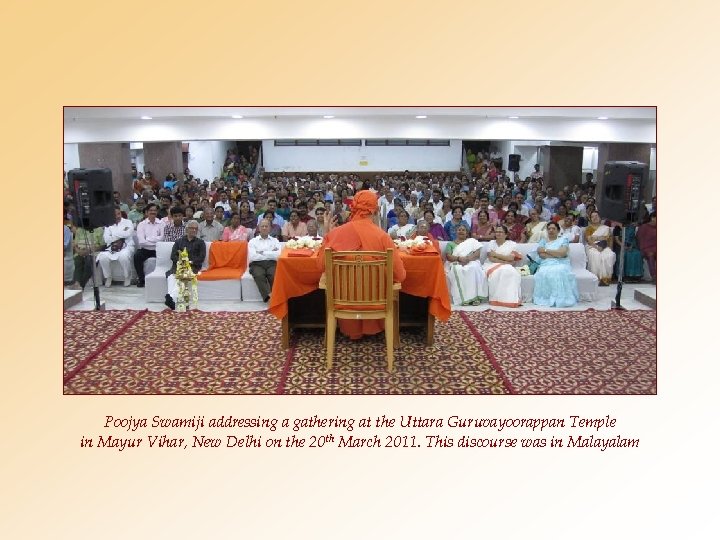 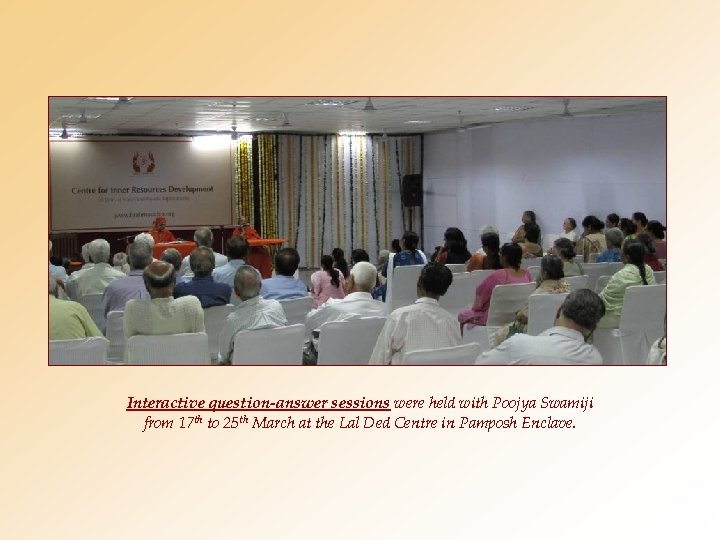 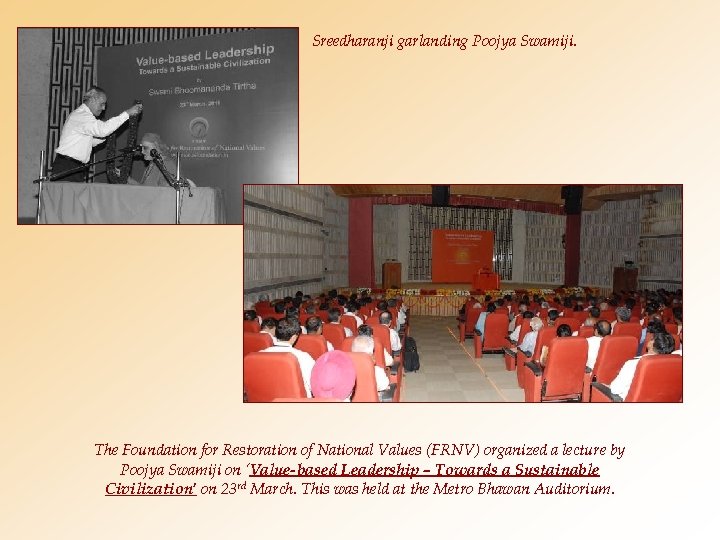 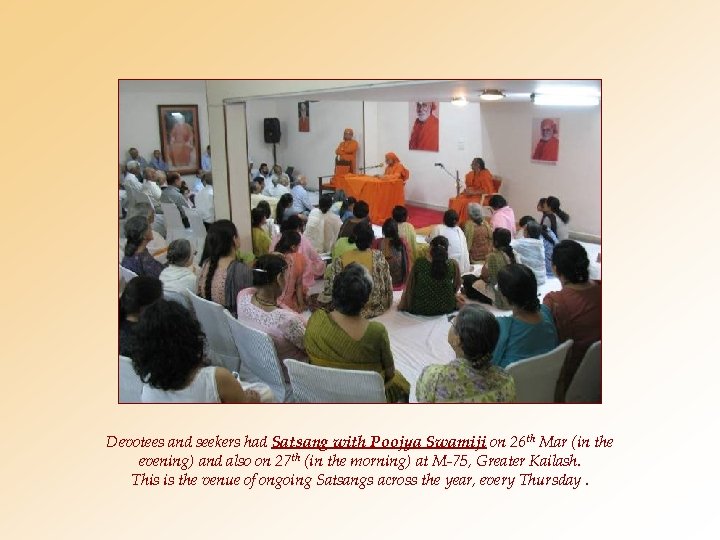 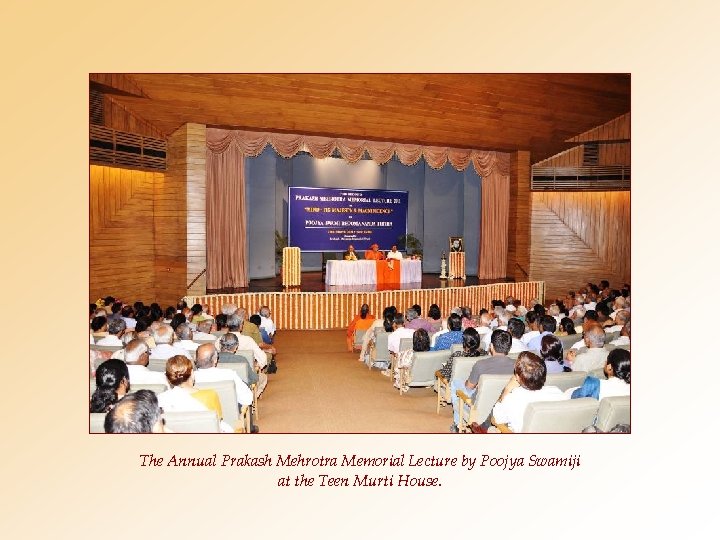 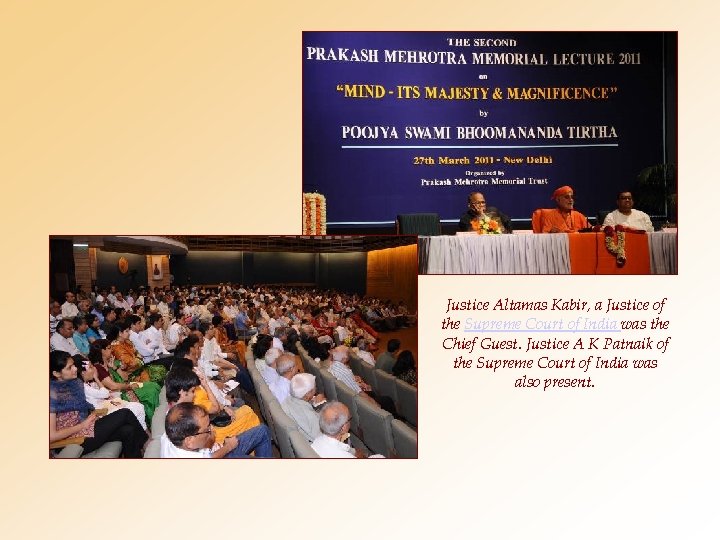 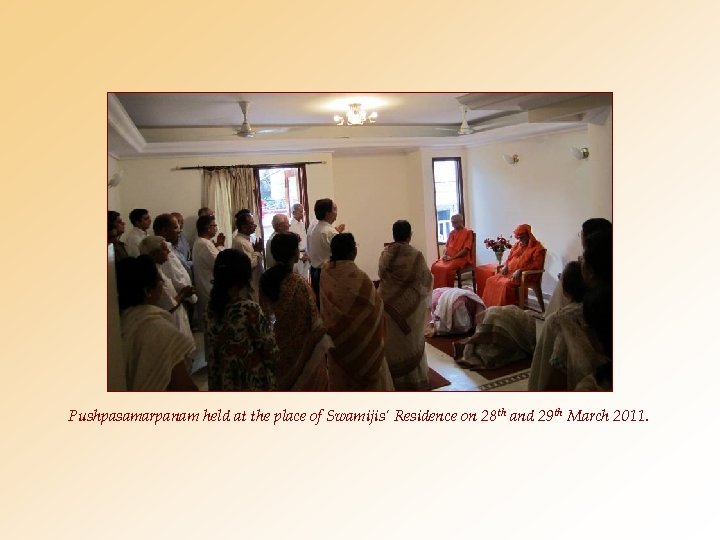 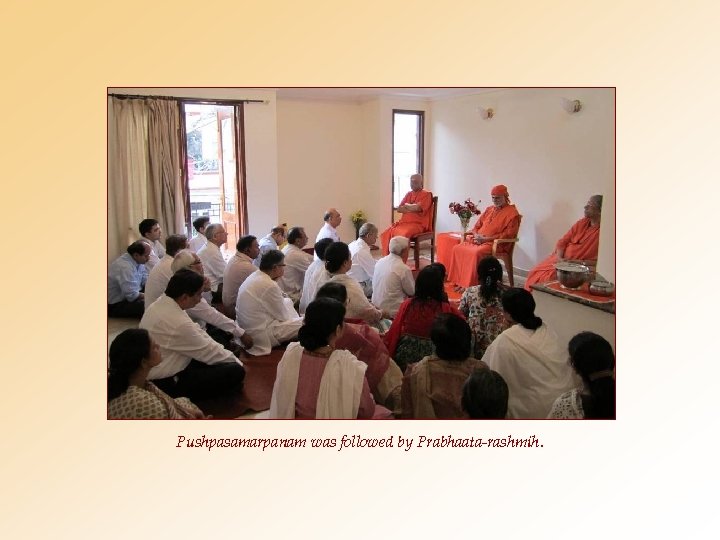 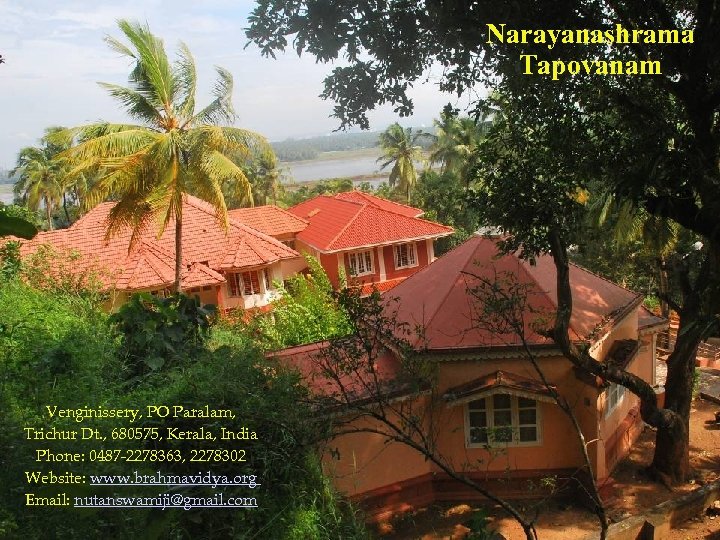 On 19 th March, Poojya Swamiji conducted a half-day workshop on ‘Harnessing Inner Resources for Ethical Leadership and Governance’. This session was held for Senior Corporate Leaders at the India International Centre, New Delhi.

‘Bhagavadgeeta – A Revolutionary Message for Transforming Life’ was the topic of the classes by Swami Nirviseshananda Tirthaji from 18 th to 25 th March at the Lal Ded Centre, New Delhi.

‘Living Joyfully’ was the topic of the classes by Ma Gurupriyaji from 21 st to 26 th March at the Lal Ded Centre, New Delhi. These classes were based on Sreemad Bhaagavatam and other Spiritual Texts.

Poojya Swamiji addressing a gathering at the Uttara Guruvayoorappan Temple in Mayur Vihar, New Delhi on the 20 th March 2011. This discourse was in Malayalam

Interactive question-answer sessions were held with Poojya Swamiji from 17 th to 25 th March at the Lal Ded Centre in Pamposh Enclave.

Sreedharanji garlanding Poojya Swamiji. The Foundation for Restoration of National Values (FRNV) organized a lecture by Poojya Swamiji on ‘Value-based Leadership – Towards a Sustainable Civilization’ on 23 rd March. This was held at the Metro Bhawan Auditorium.

Devotees and seekers had Satsang with Poojya Swamiji on 26 th Mar (in the evening) and also on 27 th (in the morning) at M-75, Greater Kailash. This is the venue of ongoing Satsangs across the year, every Thursday.

Pushpasamarpanam held at the place of Swamijis’ Residence on 28 th and 29 th March 2011.

Culture a nd its impacts