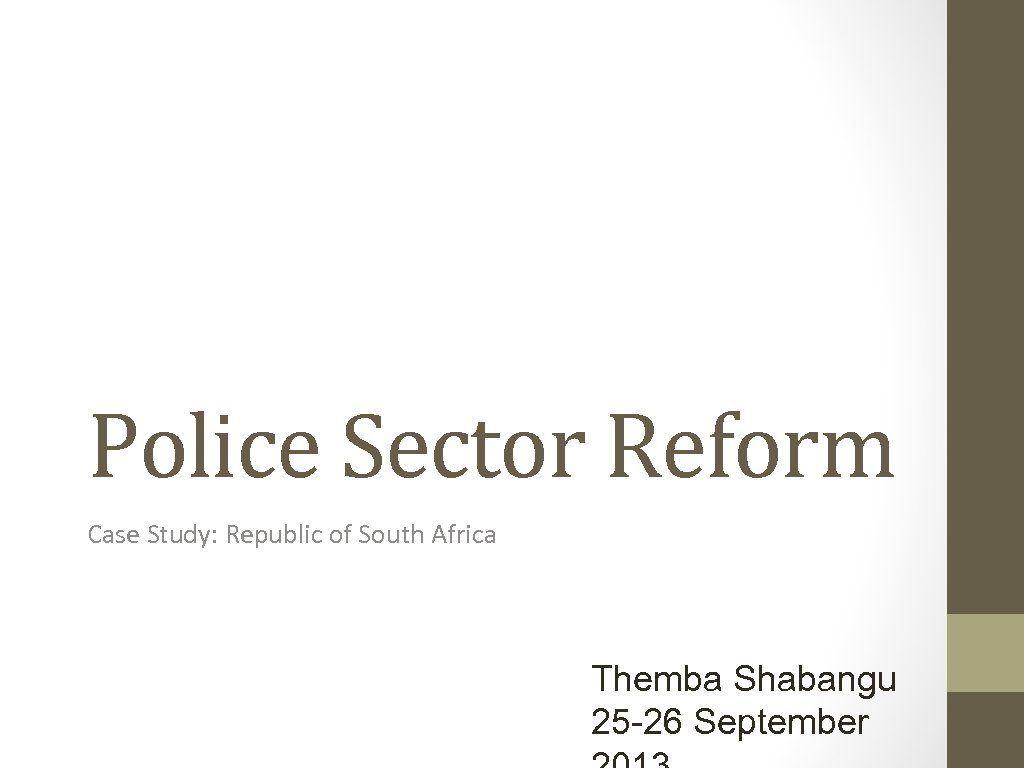 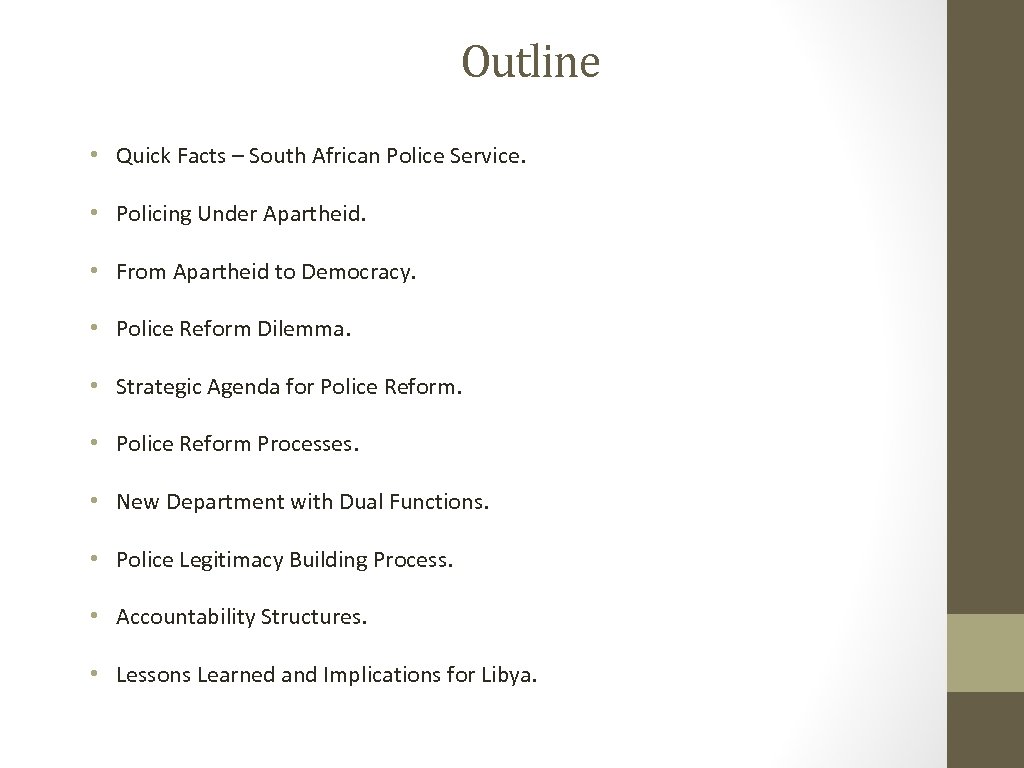 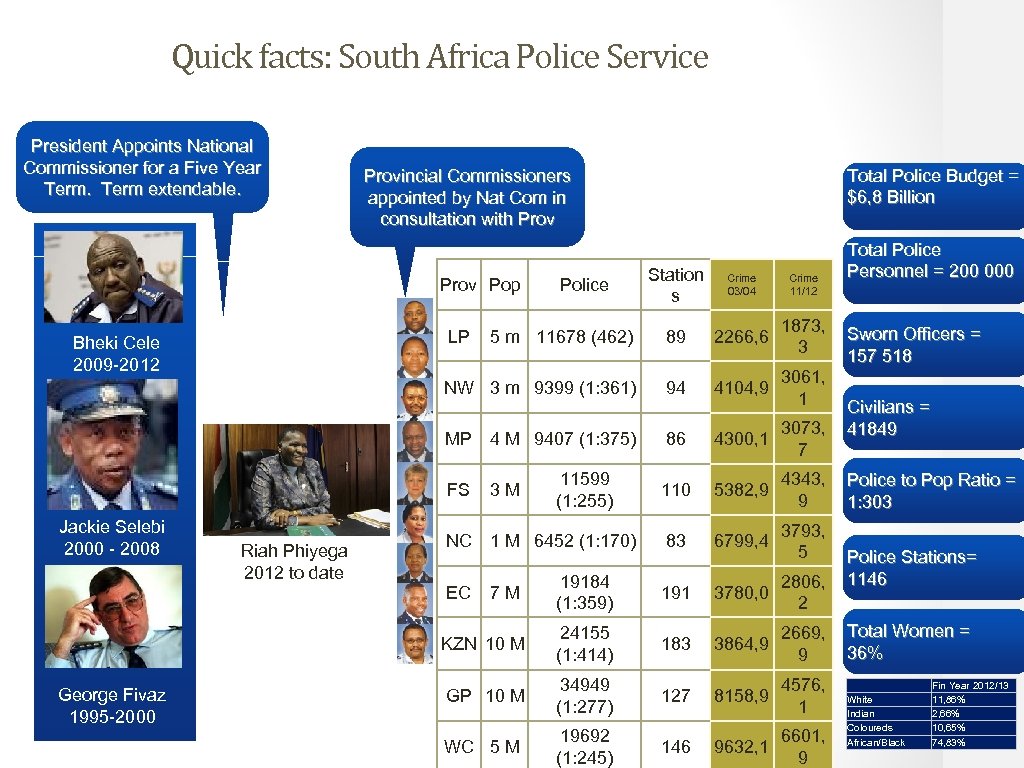 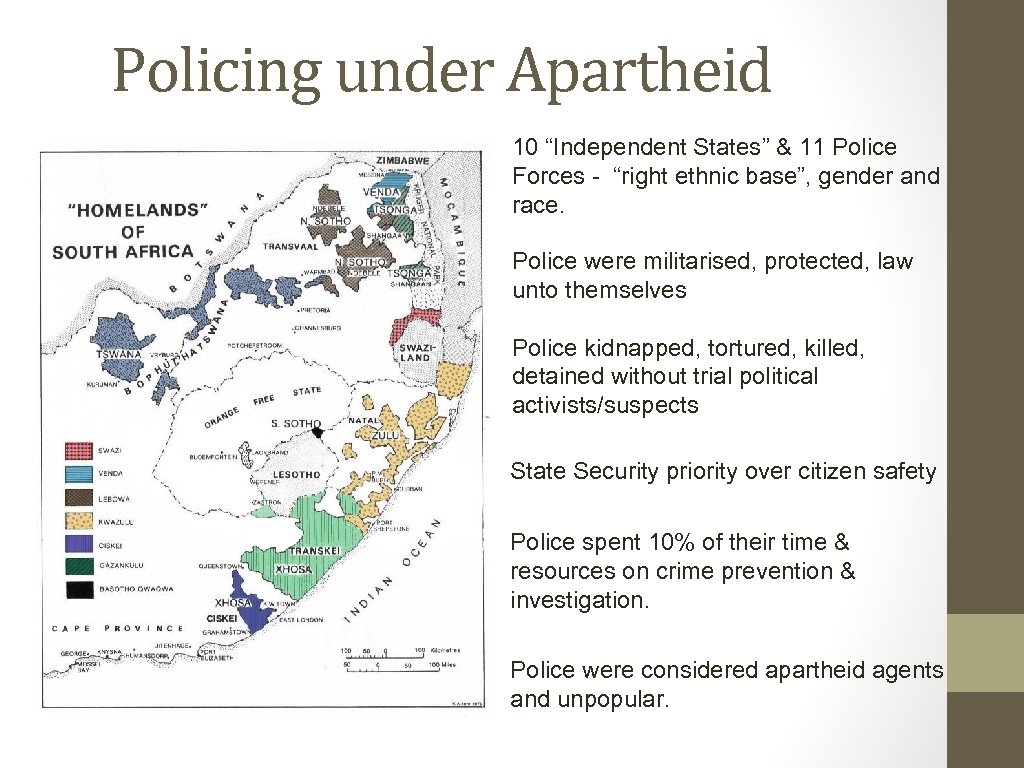 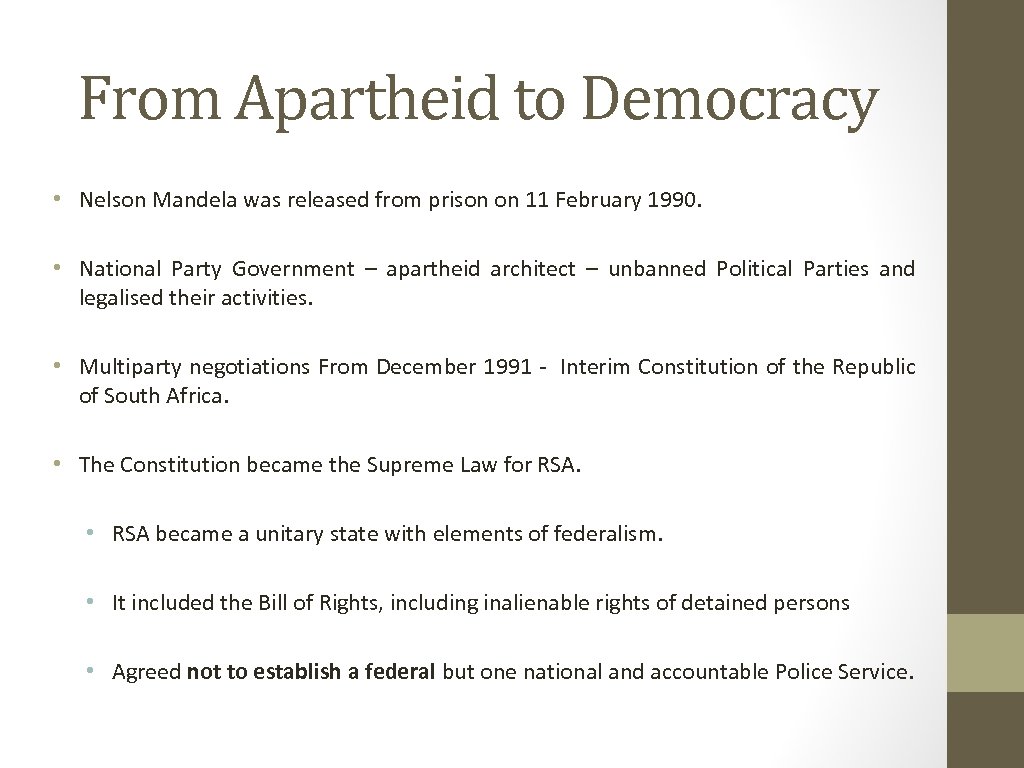 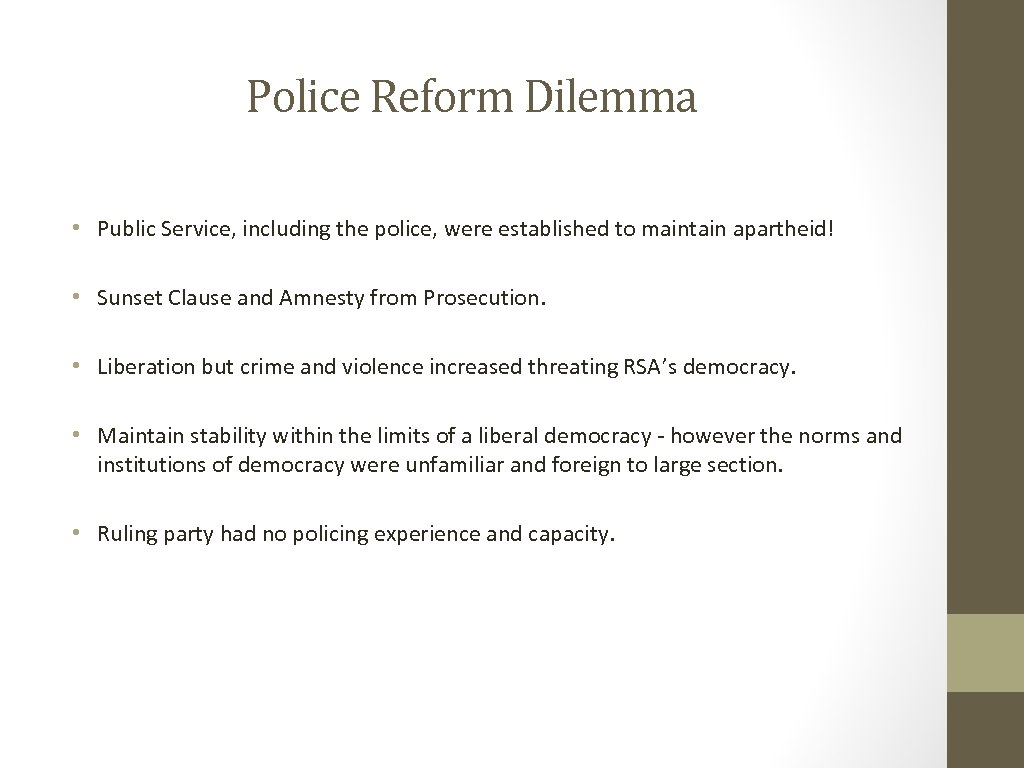 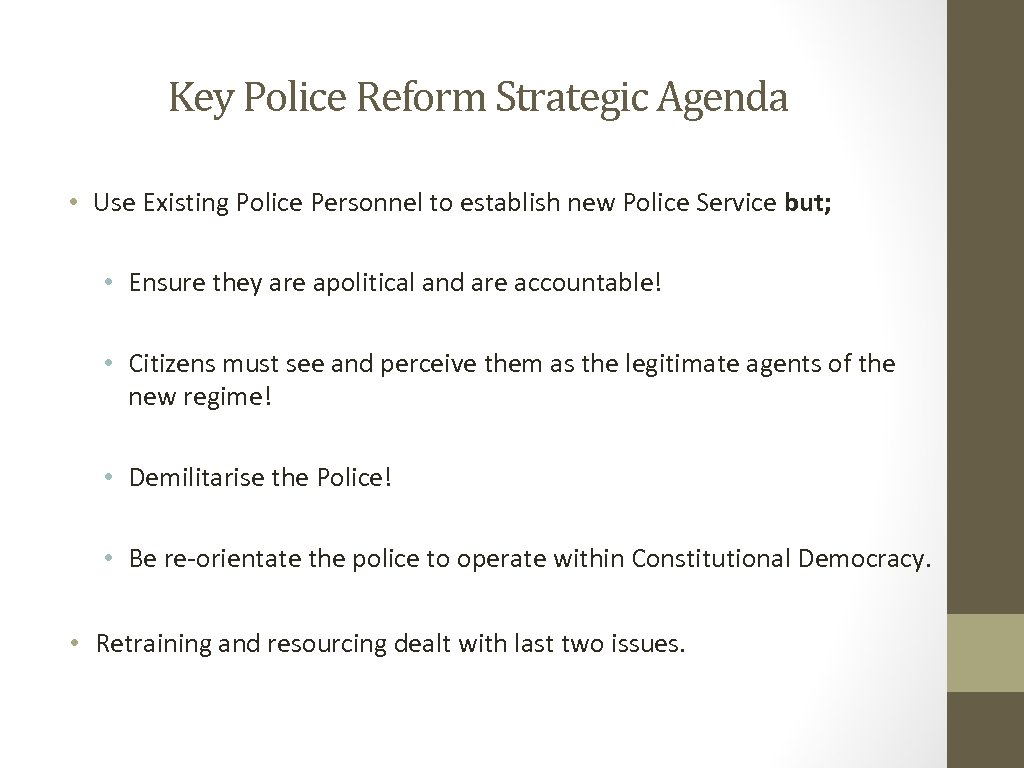 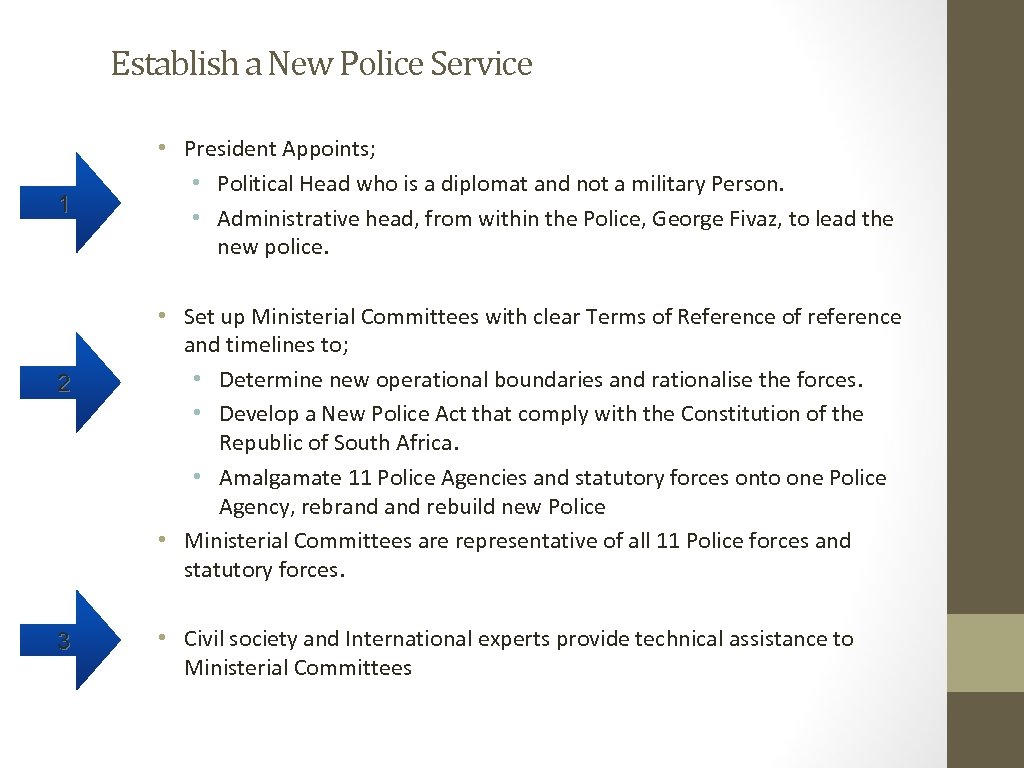 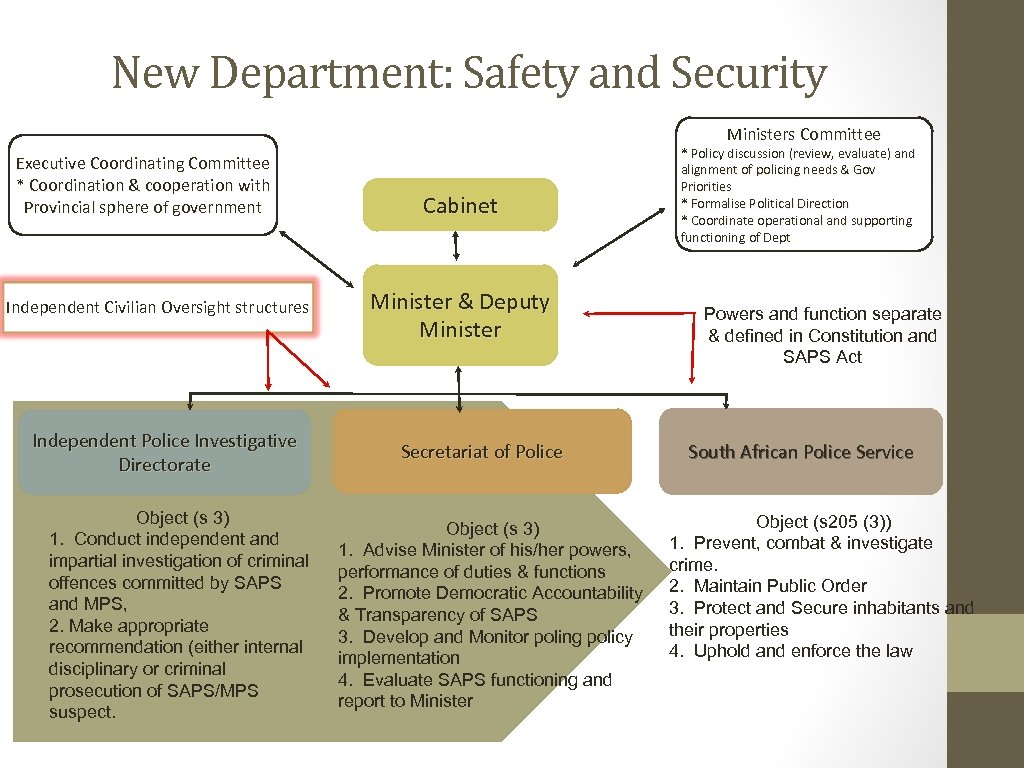 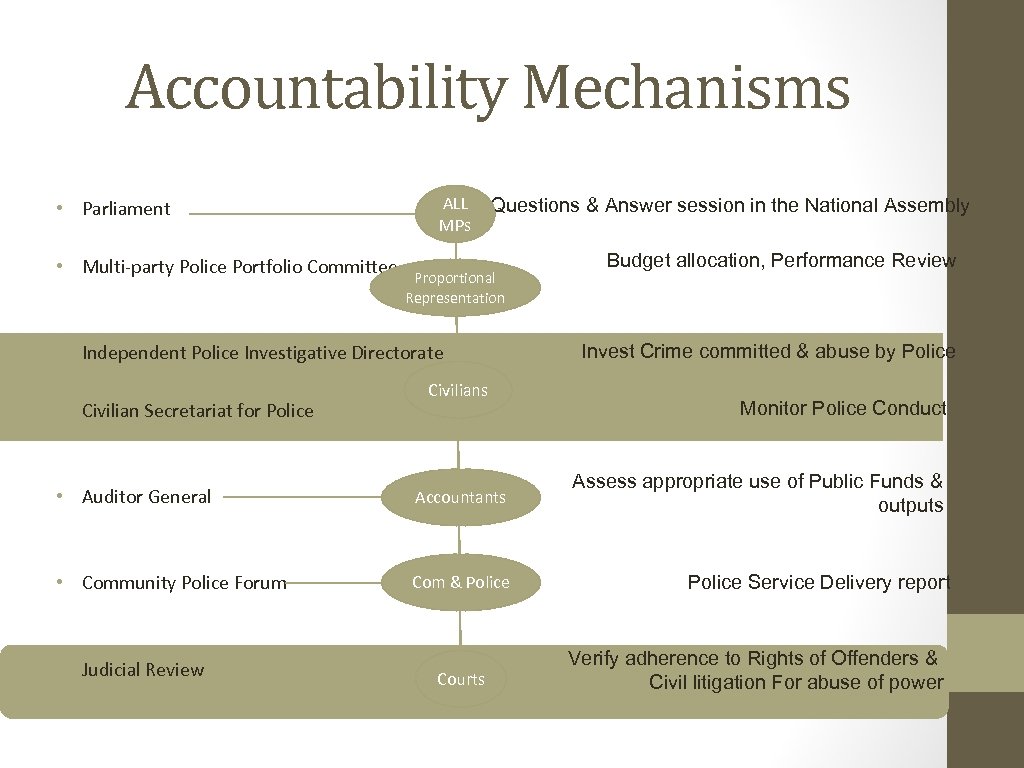 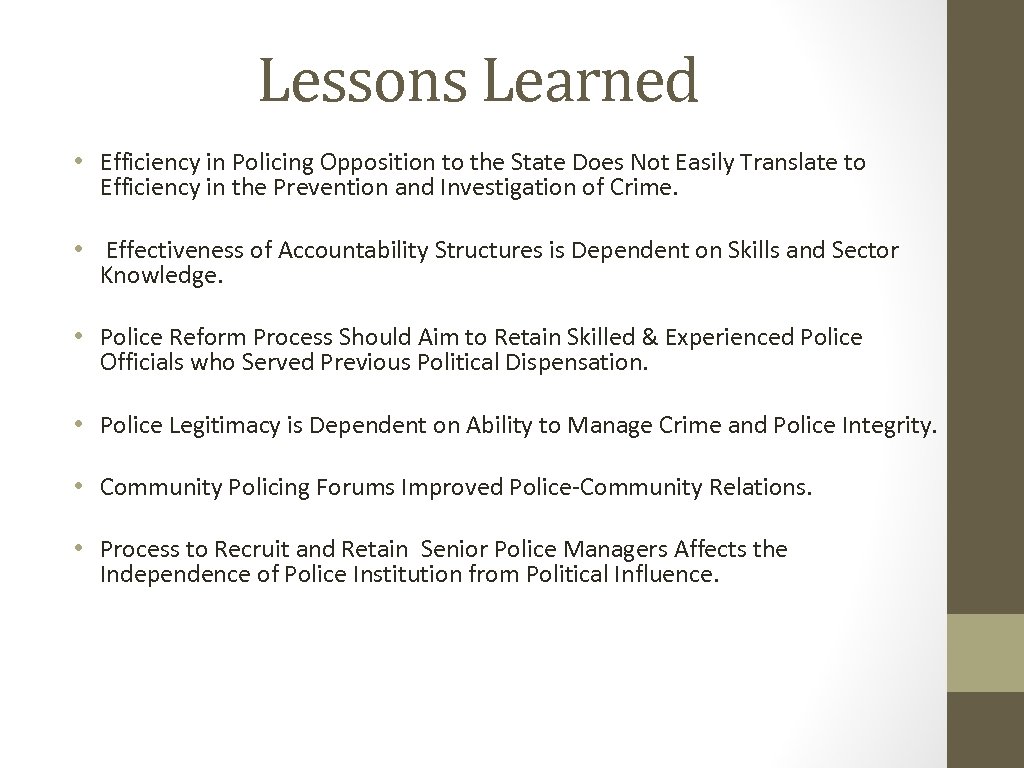 From Apartheid to Democracy • Nelson Mandela was released from prison on 11 February 1990. • National Party Government – apartheid architect – unbanned Political Parties and legalised their activities. • Multiparty negotiations From December 1991 - Interim Constitution of the Republic of South Africa. • The Constitution became the Supreme Law for RSA. • RSA became a unitary state with elements of federalism. • It included the Bill of Rights, including inalienable rights of detained persons • Agreed not to establish a federal but one national and accountable Police Service.

Police Reform Dilemma • Public Service, including the police, were established to maintain apartheid! • Sunset Clause and Amnesty from Prosecution. • Liberation but crime and violence increased threating RSA’s democracy. • Maintain stability within the limits of a liberal democracy - however the norms and institutions of democracy were unfamiliar and foreign to large section. • Ruling party had no policing experience and capacity.

Key Police Reform Strategic Agenda • Use Existing Police Personnel to establish new Police Service but; • Ensure they are apolitical and are accountable! • Citizens must see and perceive them as the legitimate agents of the new regime! • Demilitarise the Police! • Be re-orientate the police to operate within Constitutional Democracy. • Retraining and resourcing dealt with last two issues.

Establish a New Police Service 1 2 3 • President Appoints; • Political Head who is a diplomat and not a military Person. • Administrative head, from within the Police, George Fivaz, to lead the new police. • Set up Ministerial Committees with clear Terms of Reference of reference and timelines to; • Determine new operational boundaries and rationalise the forces. • Develop a New Police Act that comply with the Constitution of the Republic of South Africa. • Amalgamate 11 Police Agencies and statutory forces onto one Police Agency, rebrand rebuild new Police • Ministerial Committees are representative of all 11 Police forces and statutory forces. • Civil society and International experts provide technical assistance to Ministerial Committees

Lessons Learned • Efficiency in Policing Opposition to the State Does Not Easily Translate to Efficiency in the Prevention and Investigation of Crime. • Effectiveness of Accountability Structures is Dependent on Skills and Sector Knowledge. • Police Reform Process Should Aim to Retain Skilled & Experienced Police Officials who Served Previous Political Dispensation. • Police Legitimacy is Dependent on Ability to Manage Crime and Police Integrity. • Community Policing Forums Improved Police-Community Relations. • Process to Recruit and Retain Senior Police Managers Affects the Independence of Police Institution from Political Influence.