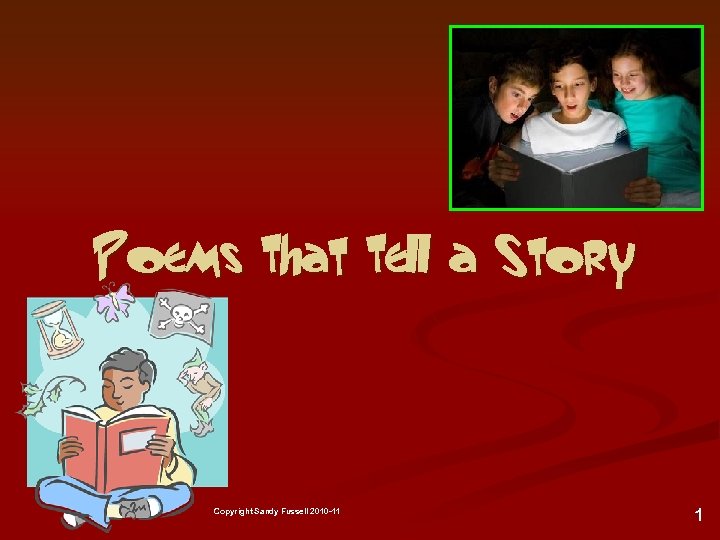 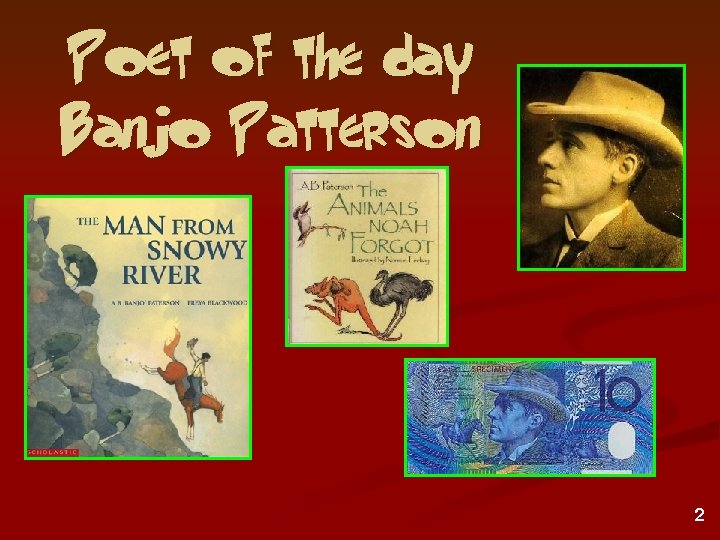 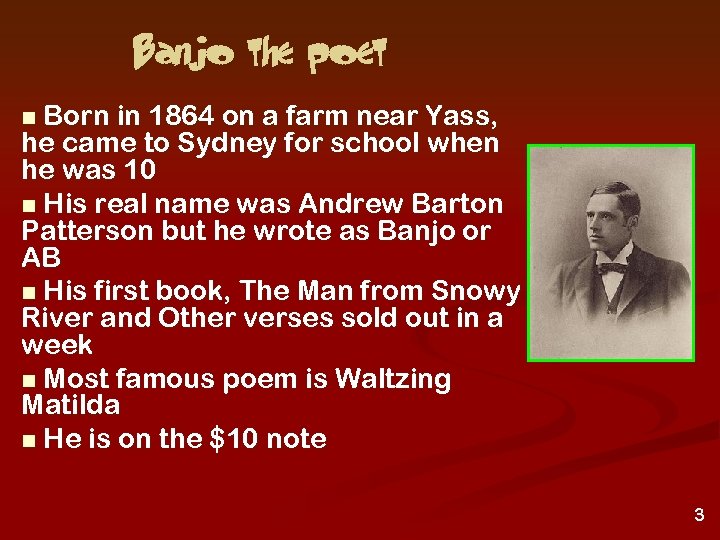 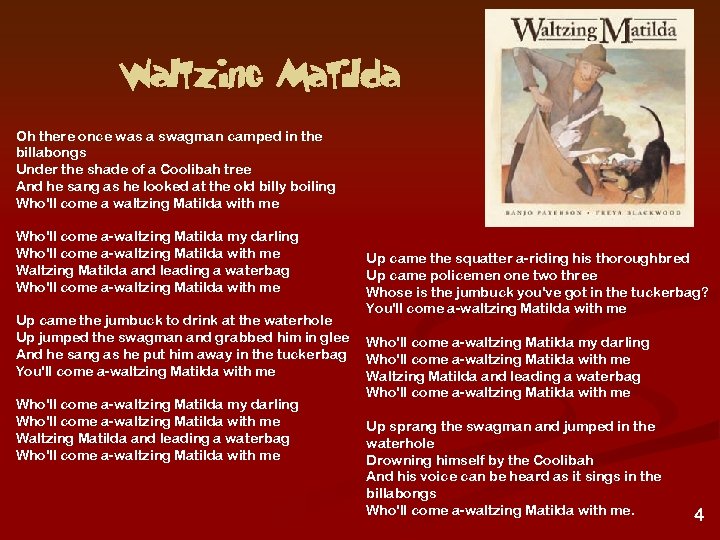 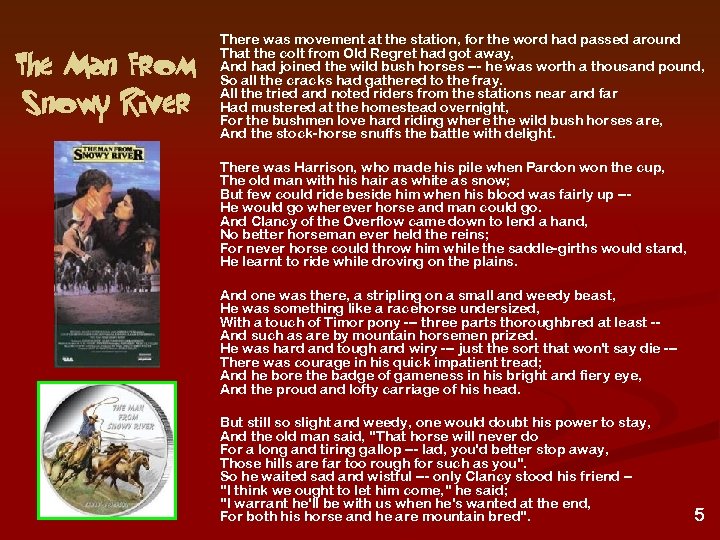 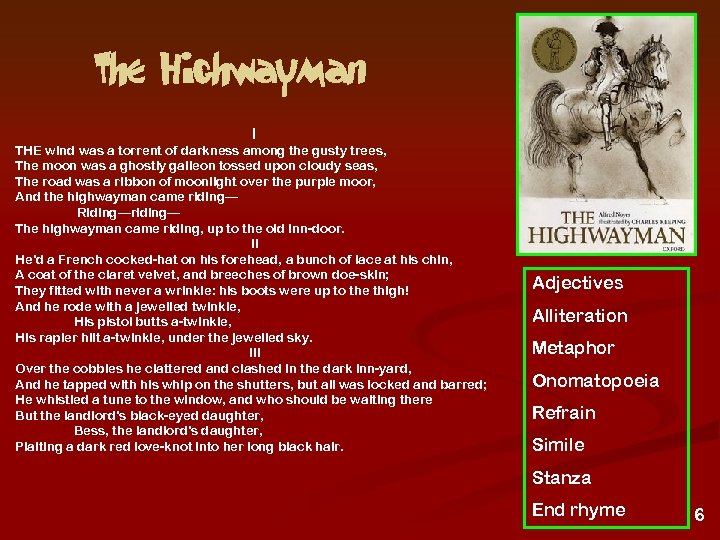 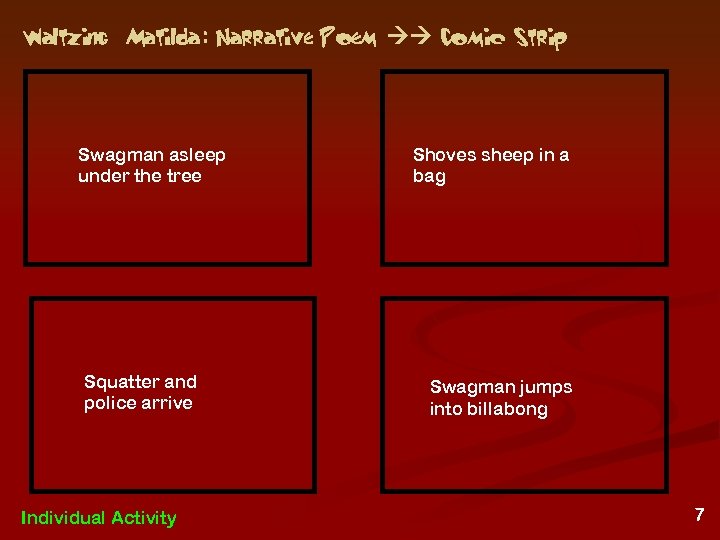 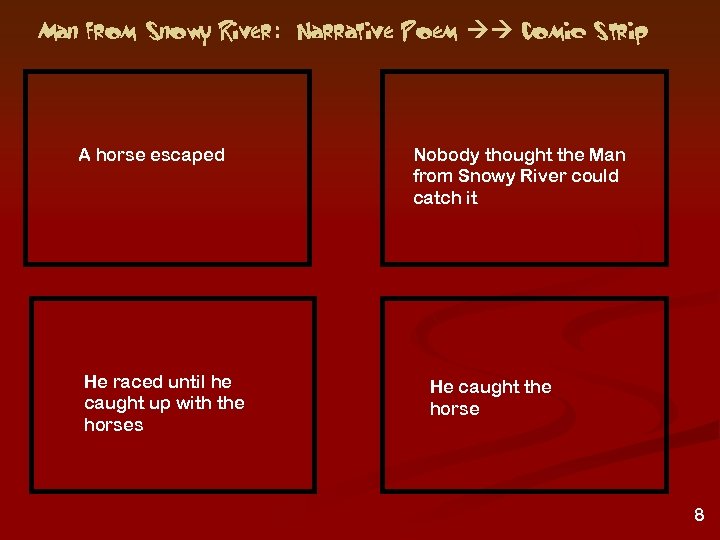 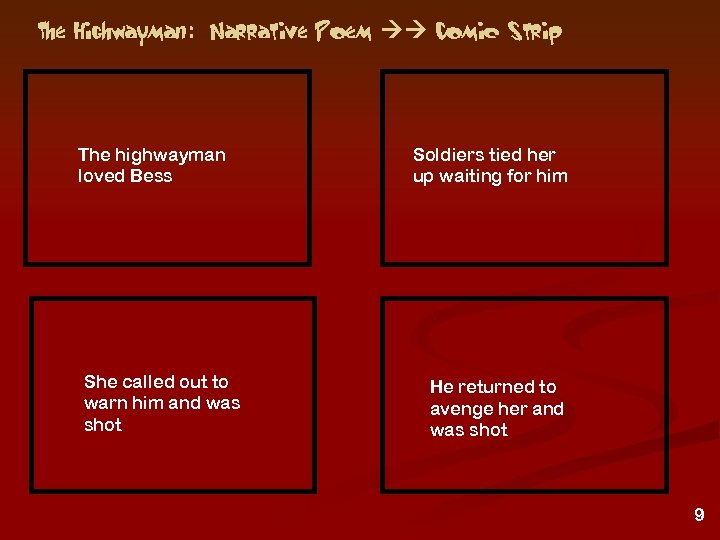 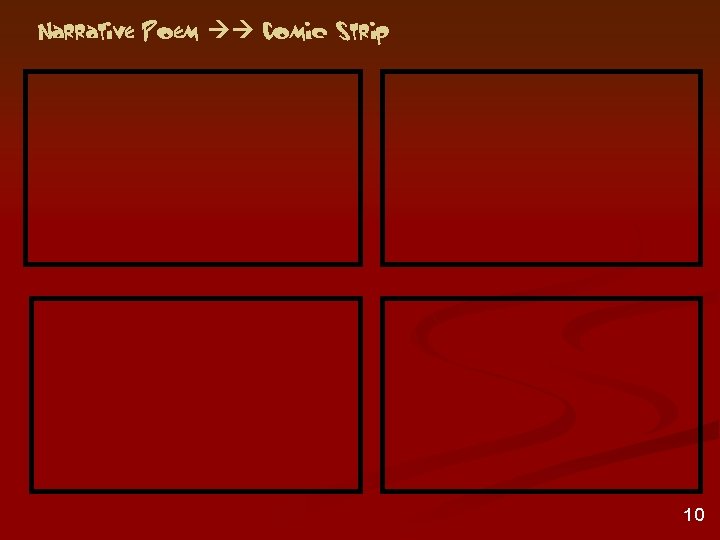 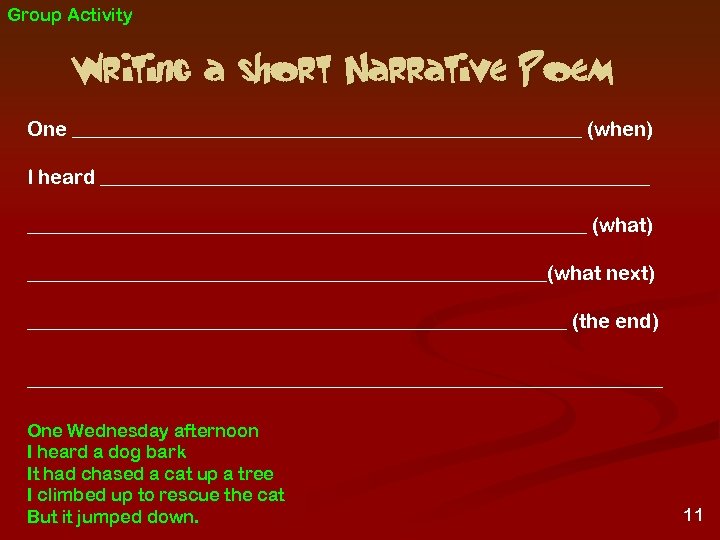 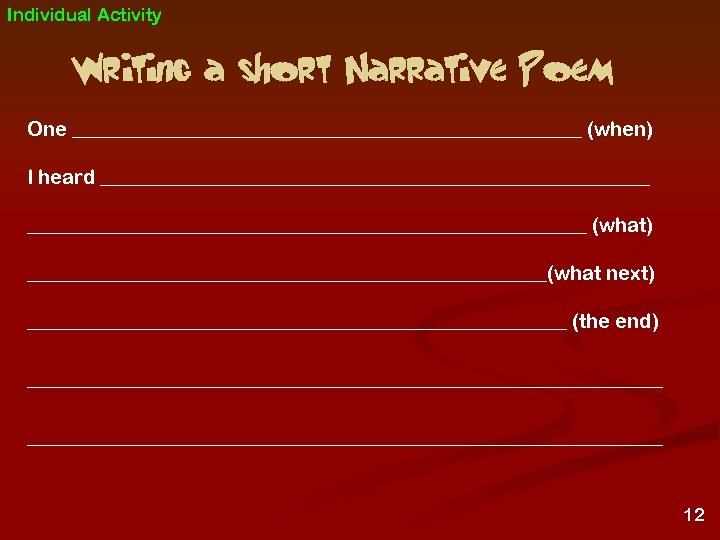 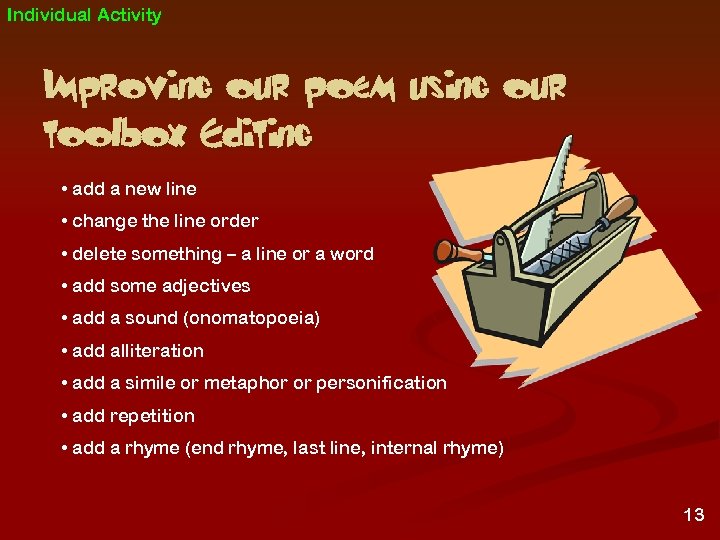 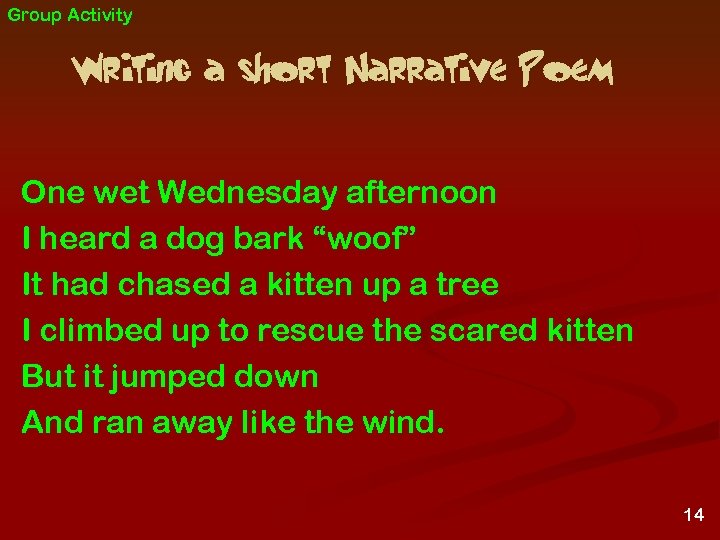 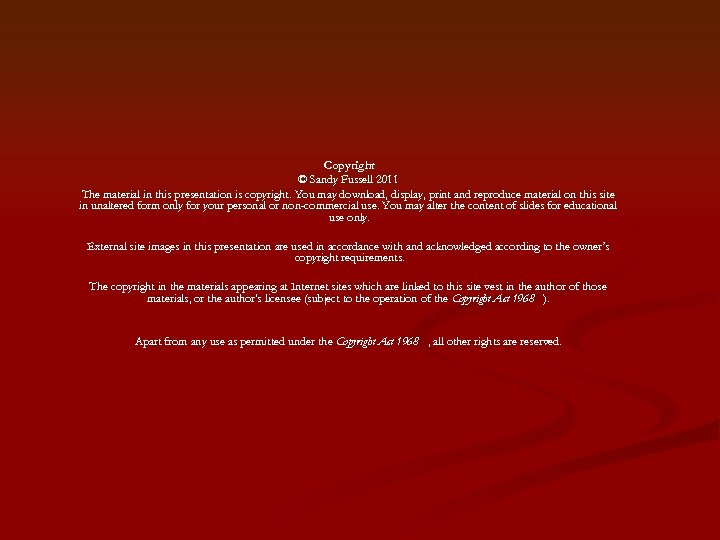 Poet of the day Banjo Patterson 2

Banjo the poet Born in 1864 on a farm near Yass, he came to Sydney for school when he was 10 n His real name was Andrew Barton Patterson but he wrote as Banjo or AB n His first book, The Man from Snowy River and Other verses sold out in a week n Most famous poem is Waltzing Matilda n He is on the $10 note n 3

The Man from Snowy River There was movement at the station, for the word had passed around That the colt from Old Regret had got away, And had joined the wild bush horses --- he was worth a thousand pound, So all the cracks had gathered to the fray. All the tried and noted riders from the stations near and far Had mustered at the homestead overnight, For the bushmen love hard riding where the wild bush horses are, And the stock-horse snuffs the battle with delight. There was Harrison, who made his pile when Pardon won the cup, The old man with his hair as white as snow; But few could ride beside him when his blood was fairly up --He would go wherever horse and man could go. And Clancy of the Overflow came down to lend a hand, No better horseman ever held the reins; For never horse could throw him while the saddle-girths would stand, He learnt to ride while droving on the plains. And one was there, a stripling on a small and weedy beast, He was something like a racehorse undersized, With a touch of Timor pony --- three parts thoroughbred at least -And such as are by mountain horsemen prized. He was hard and tough and wiry --- just the sort that won't say die --There was courage in his quick impatient tread; And he bore the badge of gameness in his bright and fiery eye, And the proud and lofty carriage of his head. But still so slight and weedy, one would doubt his power to stay, And the old man said, "That horse will never do For a long and tiring gallop --- lad, you'd better stop away, Those hills are far too rough for such as you". So he waited sad and wistful --- only Clancy stood his friend -"I think we ought to let him come, " he said; "I warrant he'll be with us when he's wanted at the end, For both his horse and he are mountain bred". 5

The Highwayman I THE wind was a torrent of darkness among the gusty trees, The moon was a ghostly galleon tossed upon cloudy seas, The road was a ribbon of moonlight over the purple moor, And the highwayman came riding— Riding—riding— The highwayman came riding, up to the old inn-door. II He'd a French cocked-hat on his forehead, a bunch of lace at his chin, A coat of the claret velvet, and breeches of brown doe-skin; They fitted with never a wrinkle: his boots were up to the thigh! And he rode with a jewelled twinkle, His pistol butts a-twinkle, His rapier hilt a-twinkle, under the jewelled sky. III Over the cobbles he clattered and clashed in the dark inn-yard, And he tapped with his whip on the shutters, but all was locked and barred; He whistled a tune to the window, and who should be waiting there But the landlord's black-eyed daughter, Bess, the landlord's daughter, Plaiting a dark red love-knot into her long black hair. Adjectives Alliteration Metaphor Onomatopoeia Refrain Simile Stanza End rhyme 6

The Highwayman: Narrative Poem Comic Strip The highwayman loved Bess She called out to warn him and was shot Soldiers tied her up waiting for him He returned to avenge her and was shot 9

Group Activity Writing a short Narrative Poem One wet Wednesday afternoon I heard a dog bark “woof” It had chased a kitten up a tree I climbed up to rescue the scared kitten But it jumped down And ran away like the wind. 14

Copyright © Sandy Fussell 2011 The material in this presentation is copyright. You may download, display, print and reproduce material on this site in unaltered form only for your personal or non-commercial use. You may alter the content of slides for educational use only. External site images in this presentation are used in accordance with and acknowledged according to the owner’s copyright requirements. The copyright in the materials appearing at Internet sites which are linked to this site vest in the author of those materials, or the author's licensee (subject to the operation of the Copyright Act 1968 ). Apart from any use as permitted under the Copyright Act 1968 , all other rights are reserved.