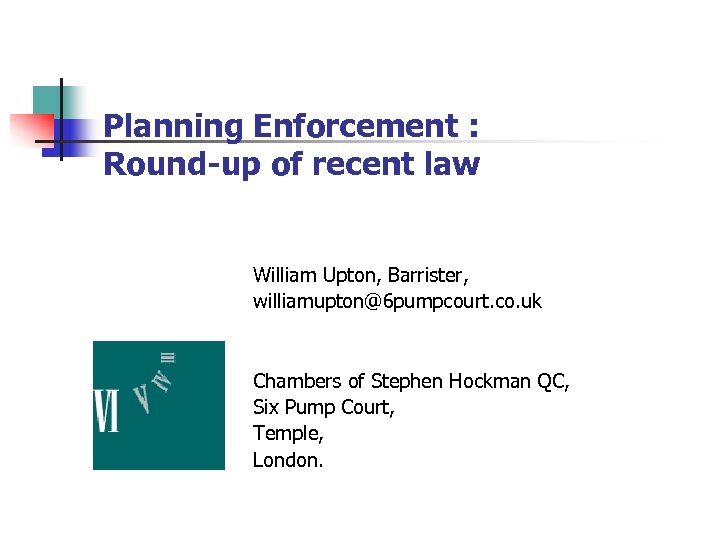 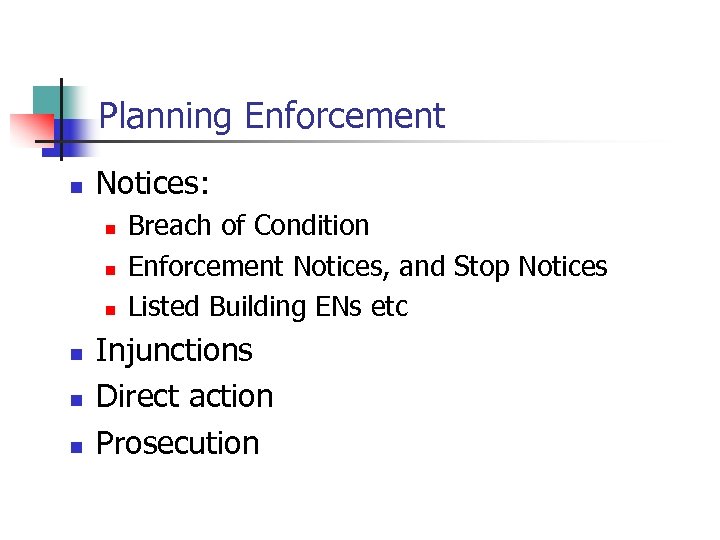 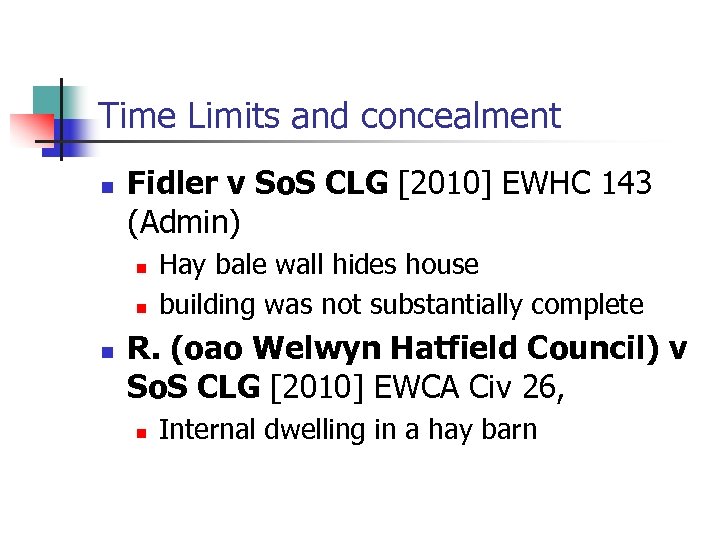 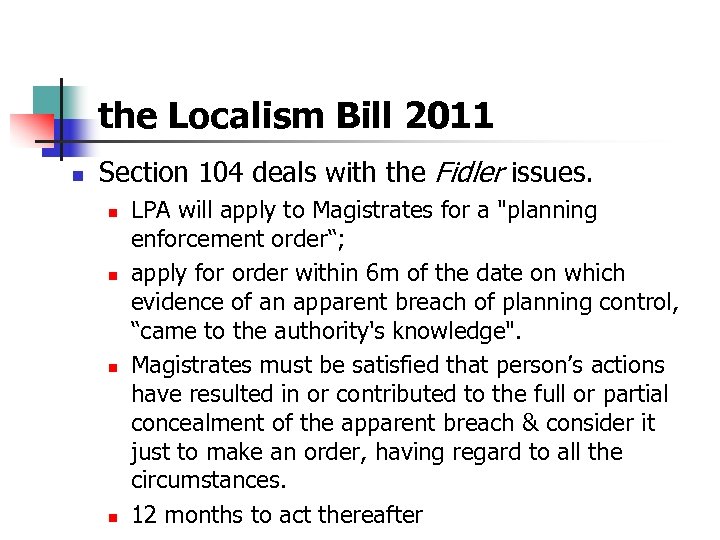 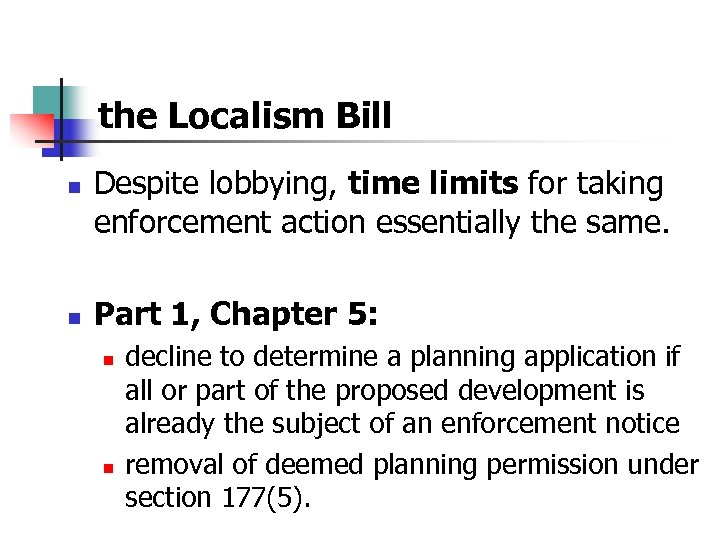 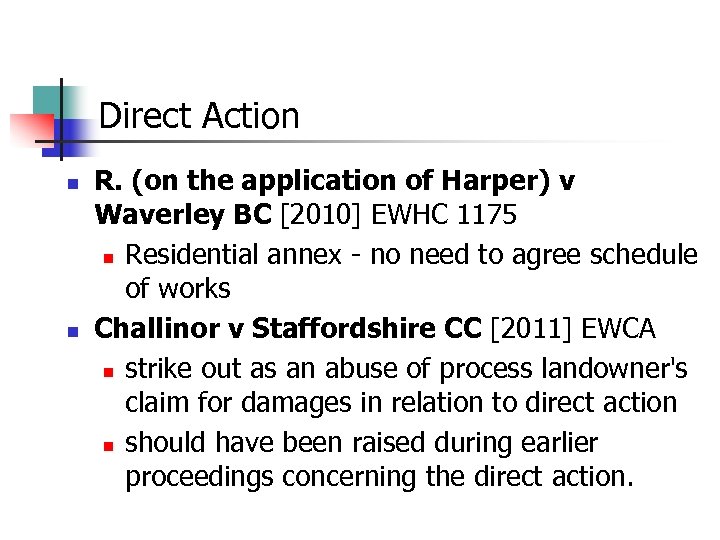 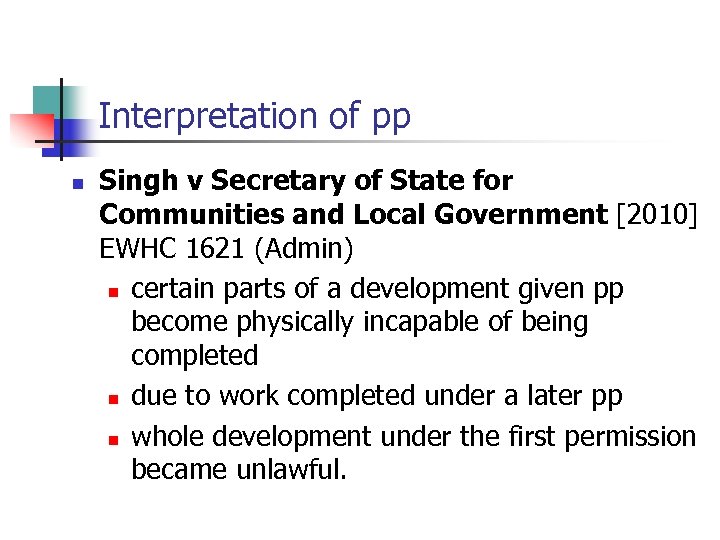 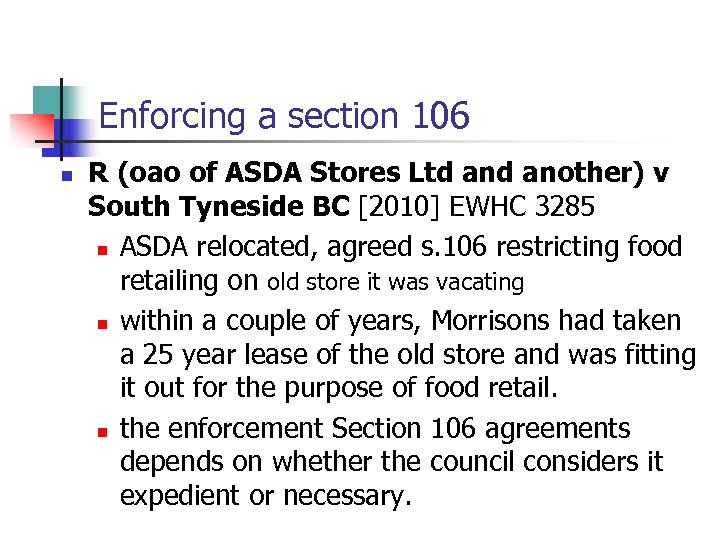 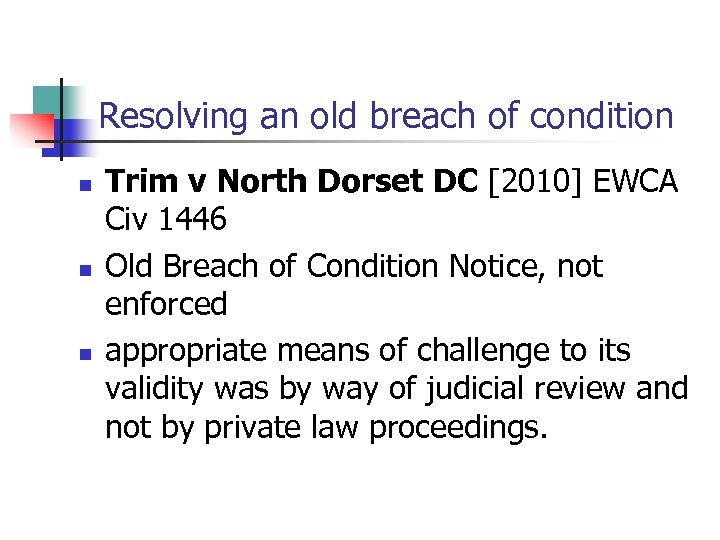 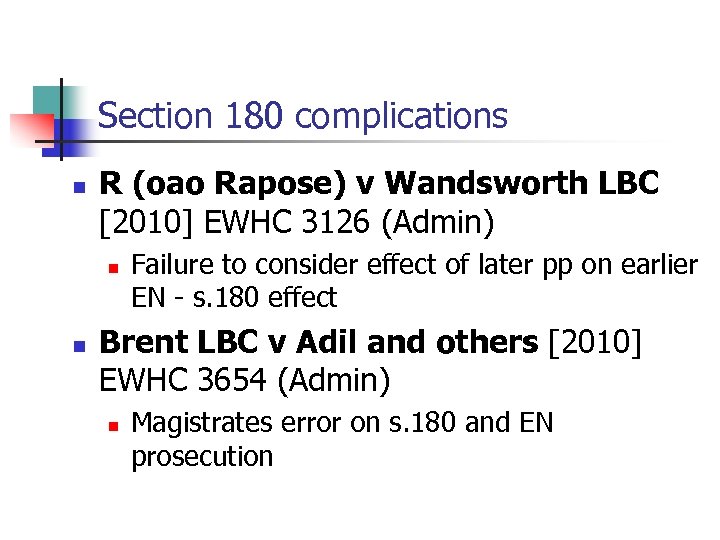 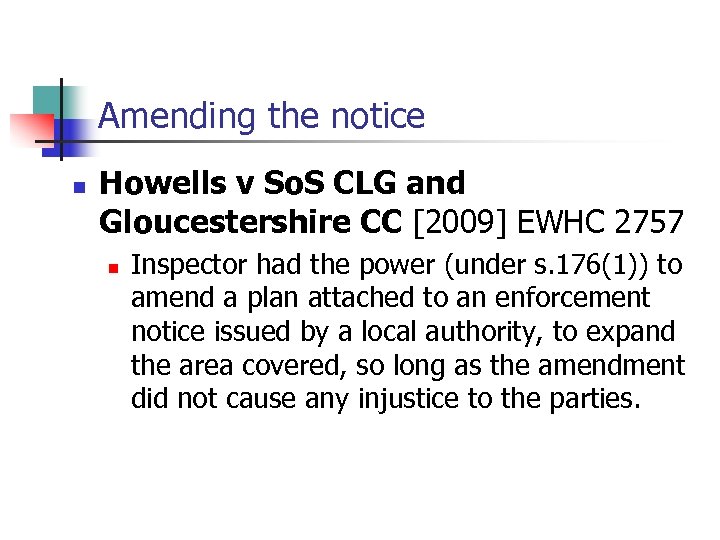 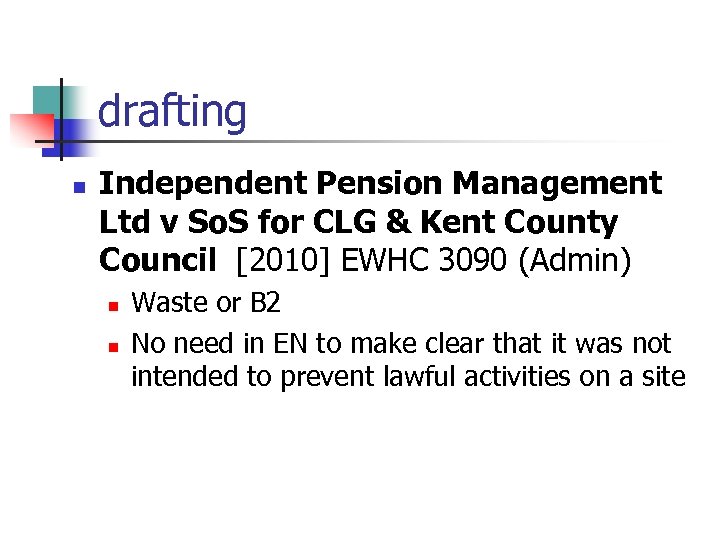 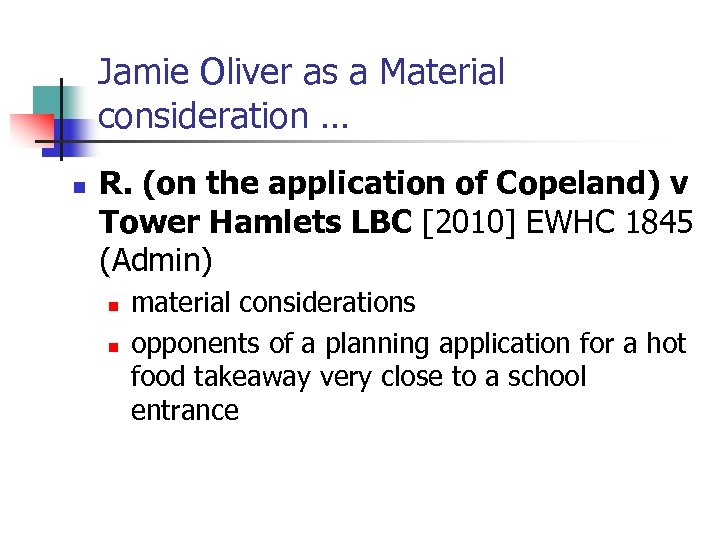 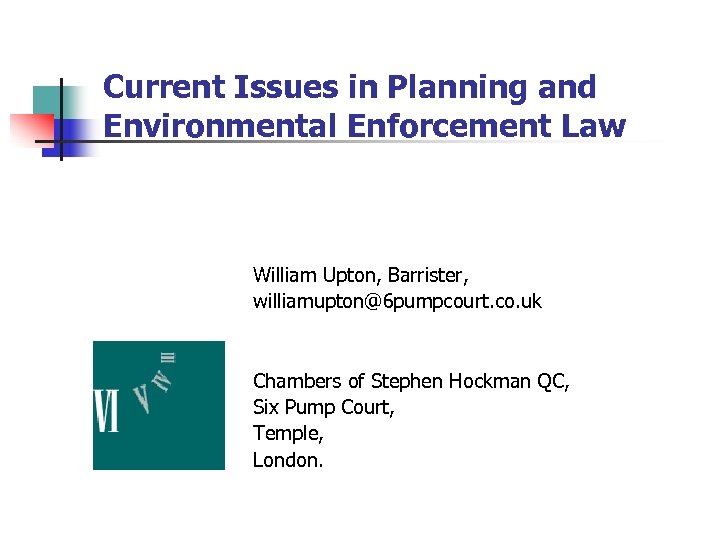 the Localism Bill 2011 n Section 104 deals with the Fidler issues. n n LPA will apply to Magistrates for a "planning enforcement order“; apply for order within 6 m of the date on which evidence of an apparent breach of planning control, “came to the authority's knowledge". Magistrates must be satisfied that person’s actions have resulted in or contributed to the full or partial concealment of the apparent breach & consider it just to make an order, having regard to all the circumstances. 12 months to act thereafter

the Localism Bill n n Despite lobbying, time limits for taking enforcement action essentially the same. Part 1, Chapter 5: n n decline to determine a planning application if all or part of the proposed development is already the subject of an enforcement notice removal of deemed planning permission under section 177(5).

Direct Action n n R. (on the application of Harper) v Waverley BC [2010] EWHC 1175 n Residential annex - no need to agree schedule of works Challinor v Staffordshire CC [2011] EWCA n strike out as an abuse of process landowner's claim for damages in relation to direct action n should have been raised during earlier proceedings concerning the direct action.

Interpretation of pp n Singh v Secretary of State for Communities and Local Government [2010] EWHC 1621 (Admin) n certain parts of a development given pp become physically incapable of being completed n due to work completed under a later pp n whole development under the first permission became unlawful.

Enforcing a section 106 n R (oao of ASDA Stores Ltd another) v South Tyneside BC [2010] EWHC 3285 n ASDA relocated, agreed s. 106 restricting food retailing on old store it was vacating n within a couple of years, Morrisons had taken a 25 year lease of the old store and was fitting it out for the purpose of food retail. n the enforcement Section 106 agreements depends on whether the council considers it expedient or necessary.

Resolving an old breach of condition n Trim v North Dorset DC [2010] EWCA Civ 1446 Old Breach of Condition Notice, not enforced appropriate means of challenge to its validity was by way of judicial review and not by private law proceedings.

Amending the notice n Howells v So. S CLG and Gloucestershire CC [2009] EWHC 2757 n Inspector had the power (under s. 176(1)) to amend a plan attached to an enforcement notice issued by a local authority, to expand the area covered, so long as the amendment did not cause any injustice to the parties.

drafting n Independent Pension Management Ltd v So. S for CLG & Kent County Council [2010] EWHC 3090 (Admin) n n Waste or B 2 No need in EN to make clear that it was not intended to prevent lawful activities on a site