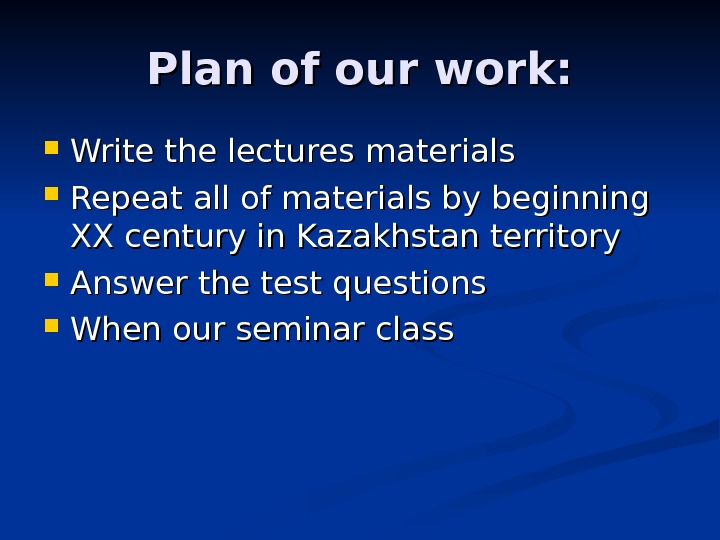 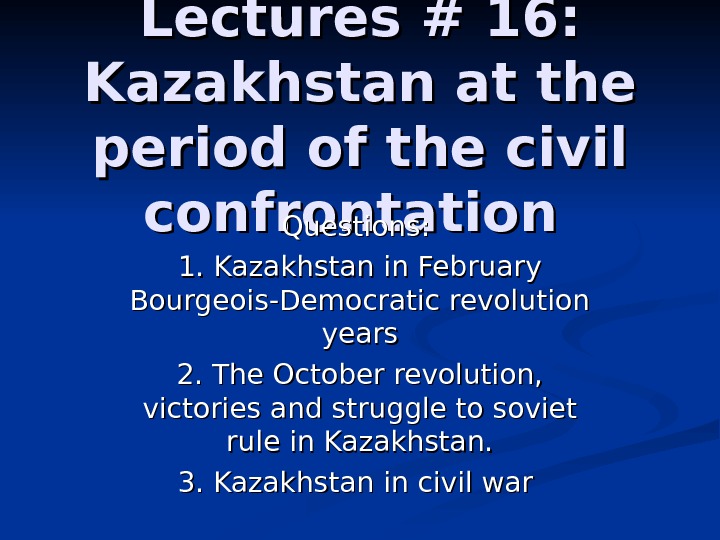 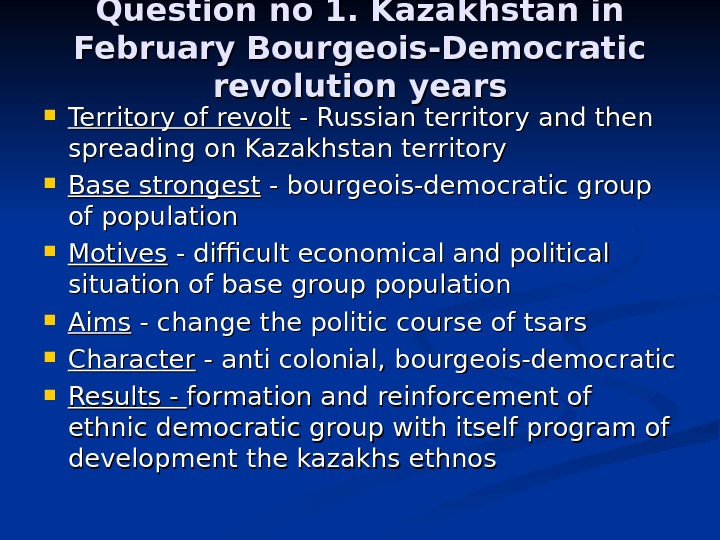 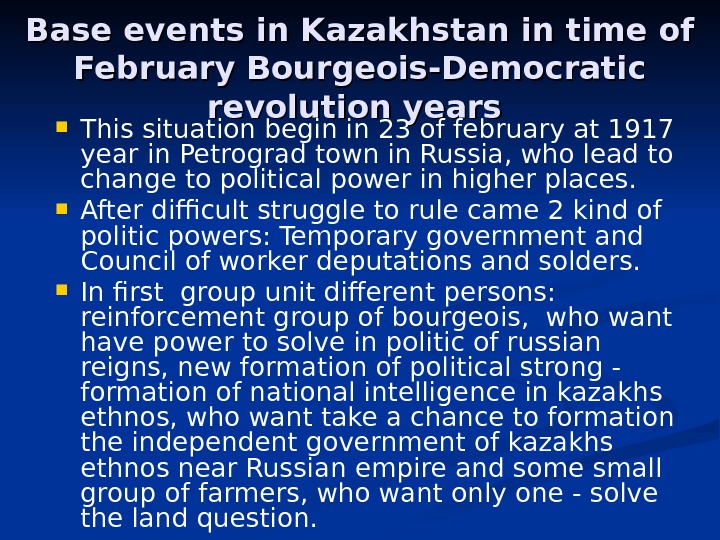 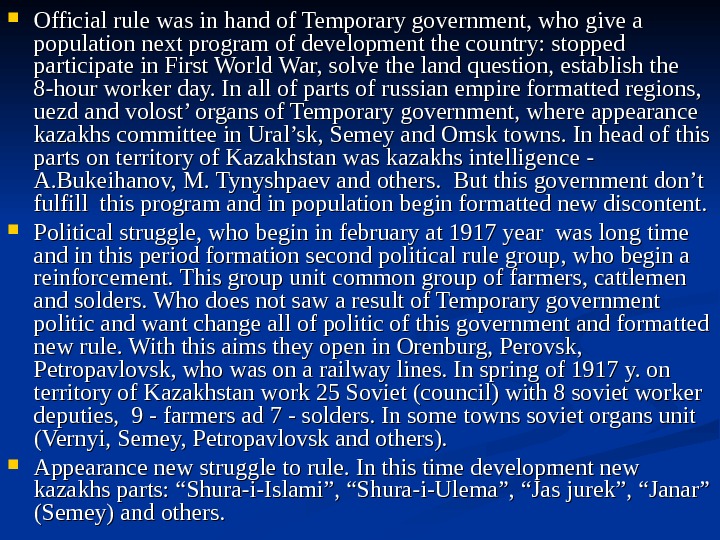 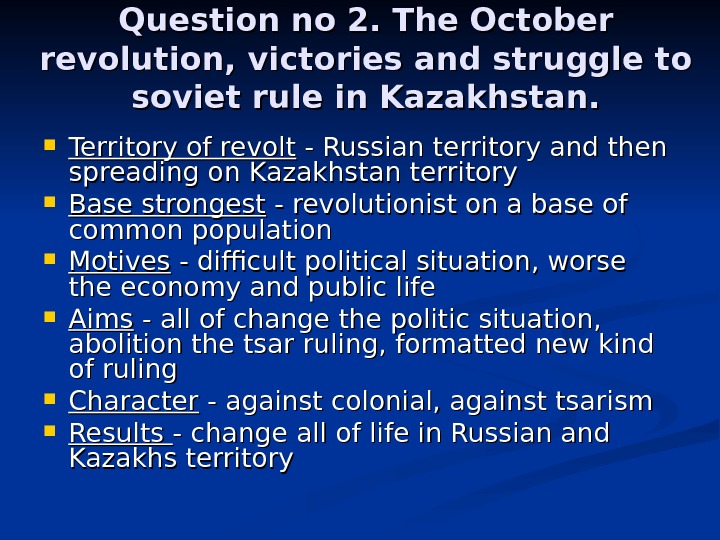 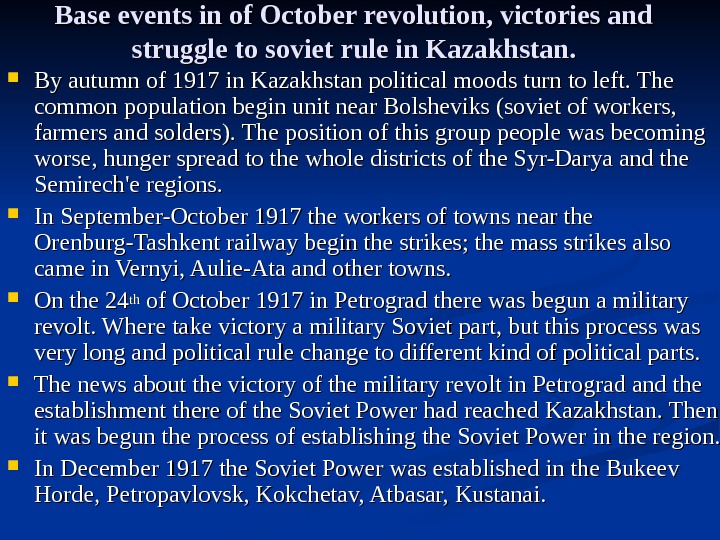 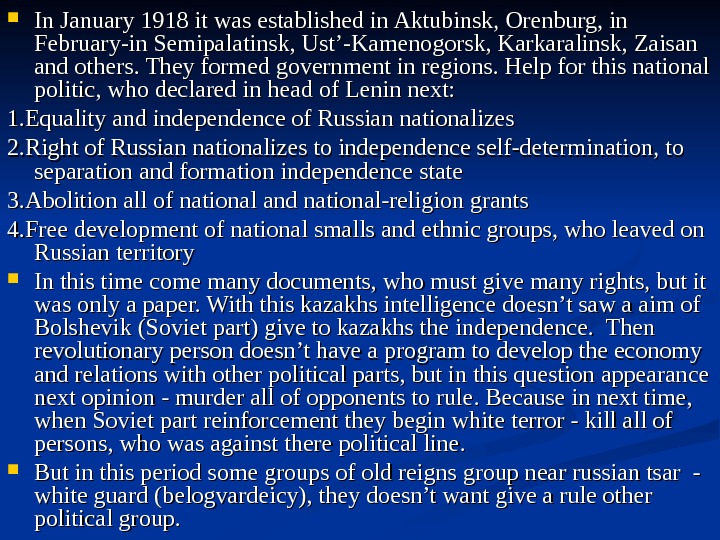 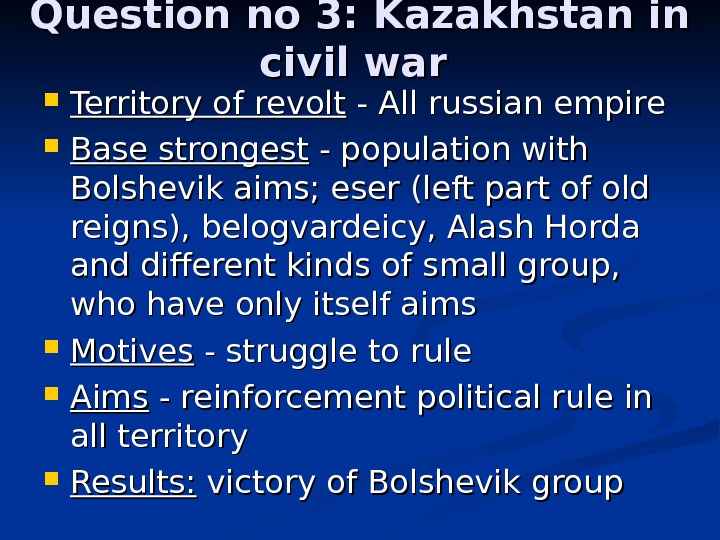 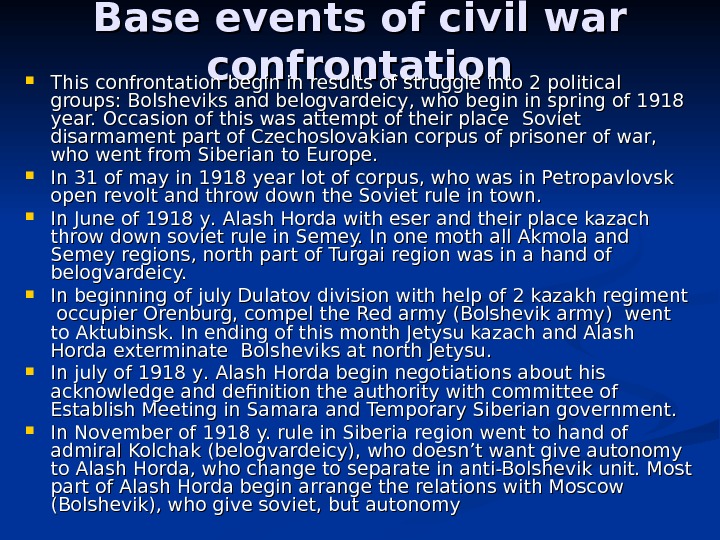 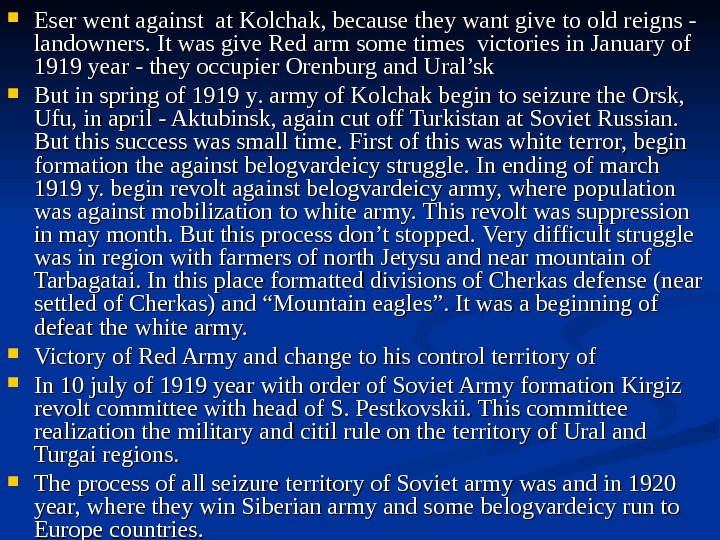 Скачать презентацию Plan of our work: Write the lectures

Plan of our work: Write the lectures materials Repeat all of materials by beginning XX century in Kazakhstan territory Answer the test questions When our seminar class

Lectures # 16: Kazakhstan at the period of the civil confrontation Questions: 1. Kazakhstan in February Bourgeois-Democratic revolution years 2. The October revolution, victories and struggle to soviet rule in Kazakhstan. 3. 3. Kazakhstan in civil war

Question no 1. Kazakhstan in February Bourgeois-Democratic revolution years Territory of revolt — Russian territory and then spreading on Kazakhstan territory Base strongest — bourgeois-democratic group of population Motives — difficult economical and political situation of base group population Aims — change the politic course of tsars Character — anti colonial, bourgeois-democratic Results — — formation and reinforcement of ethnic democratic group with itself program of development the kazakhs ethnos

Base events in Kazakhstan in time of February Bourgeois-Democratic revolution years This situation begin in 23 of february at 1917 year in Petrograd town in Russia, who lead to change to political power in higher places. After difficult struggle to rule came 2 kind of politic powers: Temporary government and Council of worker deputations and solders. In first group unit different persons: reinforcement group of bourgeois, who want have power to solve in politic of russian reigns, new formation of political strong — formation of national intelligence in kazakhs ethnos, who want take a chance to formation the independent government of kazakhs ethnos near Russian empire and some small group of farmers, who want only one — solve the land question.

Official rule was in hand of Temporary government, who give a population next program of development the country: stopped participate in First World War, solve the land question, establish the 8 -hour worker day. In all of parts of russian empire formatted regions, uezd and volost’ organs of Temporary government, where appearance kazakhs committee in Ural’sk, Semey and Omsk towns. In head of this parts on territory of Kazakhstan was kazakhs intelligence — A. Bukeihanov, M. Tynyshpaev and others. But this government don’t fulfill this program and in population begin formatted new discontent. Political struggle, who begin in february at 1917 year was long time and in this period formation second political rule group, who begin a reinforcement. This group unit common group of farmers, cattlemen and solders. Who does not saw a result of Temporary government politic and want change all of politic of this government and formatted new rule. With this aims they open in Orenburg, Perovsk, Petropavlovsk, who was on a railway lines. In spring of 1917 y. on territory of Kazakhstan work 25 Soviet (council) with 8 soviet worker deputies, 9 — farmers ad 7 — solders. In some towns soviet organs unit (Vernyi, Semey, Petropavlovsk and others). Appearance new struggle to rule. In this time development new kazakhs parts: “Shura-i-Islami”, “Shura-i-Ulema”, “Jas jurek”, “Janar” (Semey) and others.

Question no 2. The October revolution, victories and struggle to soviet rule in Kazakhstan. Territory of revolt — Russian territory and then spreading on Kazakhstan territory Base strongest — revolutionist on a base of common population Motives — difficult political situation, worse the economy and public life Aims — all of change the politic situation, abolition the tsar ruling, formatted new kind of ruling Character — against colonial, against tsarism Results — change all of life in Russian and Kazakhs territory

Base events in of October revolution, victories and struggle to soviet rule in Kazakhstan. By autumn of 1917 in Kazakhstan political moods turn to left. The common population begin unit near Bolsheviks (soviet of workers, farmers and solders). The position of this group people was becoming worse, hunger spread to the whole districts of the Syr-Darya and the Semirech’e regions. In September-October 1917 the workers of towns near the Orenburg-Tashkent railway begin the strikes; the mass strikes also came in Vernyi, Aulie-Ata and other towns. On the 24 thth of October 1917 in Petrograd there was begun a military revolt. Where take victory a military Soviet part, but this process was very long and political rule change to different kind of political parts. The news about the victory of the military revolt in Petrograd and the establishment there of the Soviet Power had reached Kazakhstan. Then it was begun the process of establishing the Soviet Power in the region. In December 1917 the Soviet Power was established in the Bukeev Horde, Petropavlovsk, Kokchetav, Atbasar, Kustanai.

In January 1918 it was established in Aktubinsk, Orenburg, in February-in Semipalatinsk, Ust’-Kamenogorsk, Karkaralinsk, Zaisan and others. They formed government in regions. Help for this national politic, who declared in head of Lenin next: 1. Equality and independence of Russian nationalizes 2. Right of Russian nationalizes to independence self-determination, to separation and formation independence state 3. Abolition all of national and national-religion grants 4. Free development of national smalls and ethnic groups, who leaved on Russian territory In this time come many documents, who must give many rights, but it was only a paper. With this kazakhs intelligence doesn’t saw a aim of Bolshevik (Soviet part) give to kazakhs the independence. Then revolutionary person doesn’t have a program to develop the economy and relations with other political parts, but in this question appearance next opinion — murder all of opponents to rule. Because in next time, when Soviet part reinforcement they begin white terror — kill all of persons, who was against there political line. But in this period some groups of old reigns group near russian tsar — white guard (belogvardeicy), they doesn’t want give a rule other political group.

Question no 3: Kazakhstan in civil war Territory of revolt — All russian empire Base strongest — population with Bolshevik aims; eser (left part of old reigns), belogvardeicy, Alash Horda and different kinds of small group, who have only itself aims Motives — struggle to rule Aims — reinforcement political rule in all territory Results: victory of Bolshevik group

Base events of civil war confrontation This confrontation begin in results of struggle into 2 political groups: Bolsheviks and belogvardeicy, who begin in spring of 1918 year. Occasion of this was attempt of their place Soviet disarmament part of Czechoslovakian corpus of prisoner of war, who went from Siberian to Europe. In 31 of may in 1918 year lot of corpus, who was in Petropavlovsk open revolt and throw down the Soviet rule in town. . In June of 1918 yy. . Alash Horda with eser and their place kazach throw down soviet rule in Semey. In one moth all Akmola and Semey regions, north part of Turgai region was in a hand of belogvardeicy. In beginning of july Dulatov division with help of 2 kazakh regiment occupier Orenburg, compel the Red army (Bolshevik army) went to Aktubinsk. In ending of this month Jetysu kazach and Alash Horda exterminate Bolsheviks at north Jetysu. . In july of 1918 yy. . Alash Horda begin negotiations about his acknowledge and definition the authority with committee of Establish Meeting in Samara and Temporary Siberian government. In November of 1918 y. rule in Siberia region went to hand of admiral Kolchak (belogvardeicy), who doesn’t want give autonomy to Alash Horda, who change to separate in anti-Bolshevik unit. Most part of Alash Horda begin arrange the relations with Moscow (Bolshevik), who give soviet, but autonomy

Eser went against at Kolchak, because they want give to old reigns — landowners. It was give Red arm some times victories in January of 1919 year — they occupier Orenburg and Ural’sk But in spring of 191191 99 yy. . army of Kolchak begin to seizure the Orsk, Ufu, in april — Aktubinsk, again cut off Turkistan at Soviet Russian. But this success was small time. First of this was white terror, begin formation the against belogvardeicy struggle. In ending of march 1919 y. begin revolt against belogvardeicy army, where population was against mobilization to white army. This revolt was suppression in may month. But this process don’t stopped. Very difficult struggle was in region with farmers of north Jetysu and near mountain of Tarbagatai. In this place formatted divisions of Cherkas defense (near settled of Cherkas) and “Mountain eagles”. It was a beginning of defeat the white army. Victory of Red Army and change to his control territory of In 10 july of 1919 year with order of Soviet Army formation Kirgiz revolt committee with head of S. Pestkovskii. This committee realization the military and citil rule on the territory of Ural and Turgai regions. The process of all seizure territory of Soviet army was and in 1920 year, where they win Siberian army and some belogvardeicy run to Europe countries.