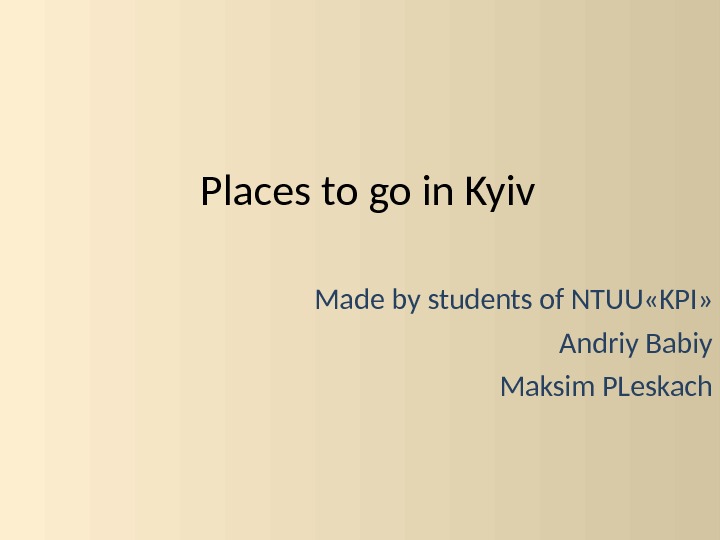 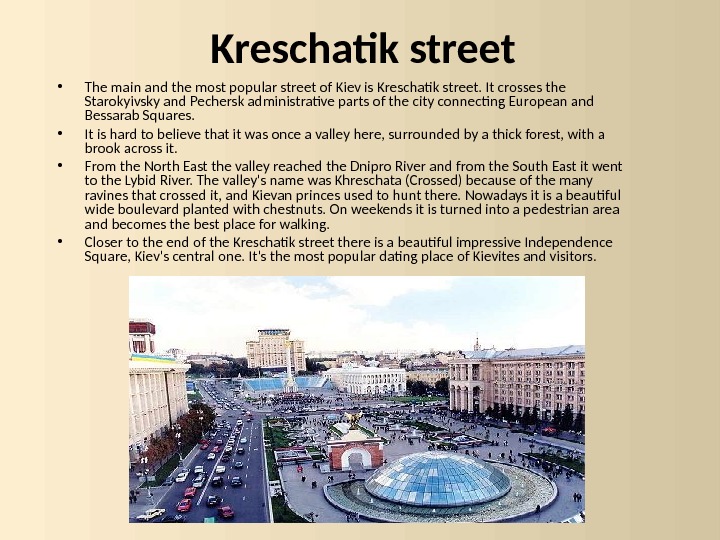 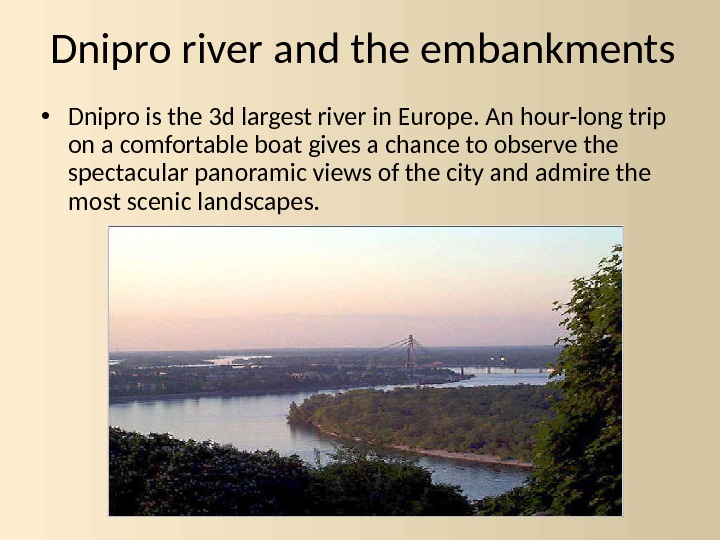 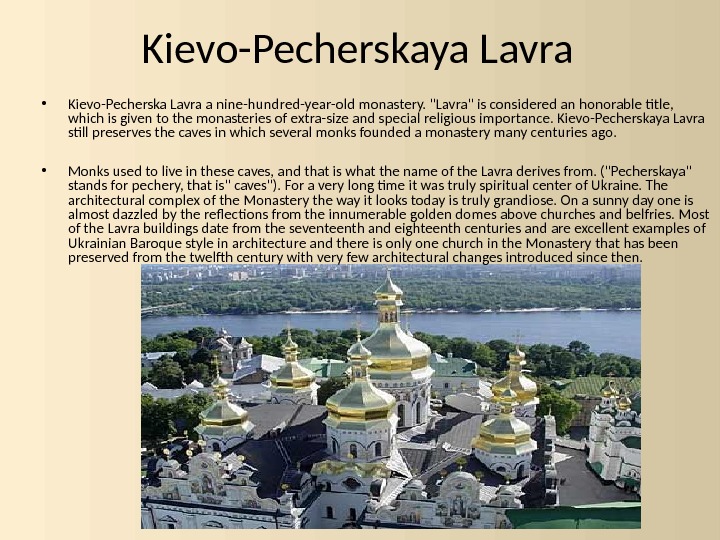 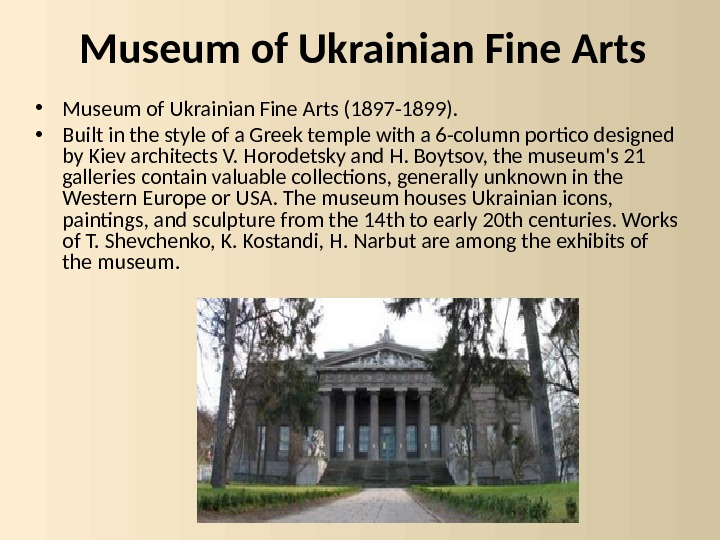 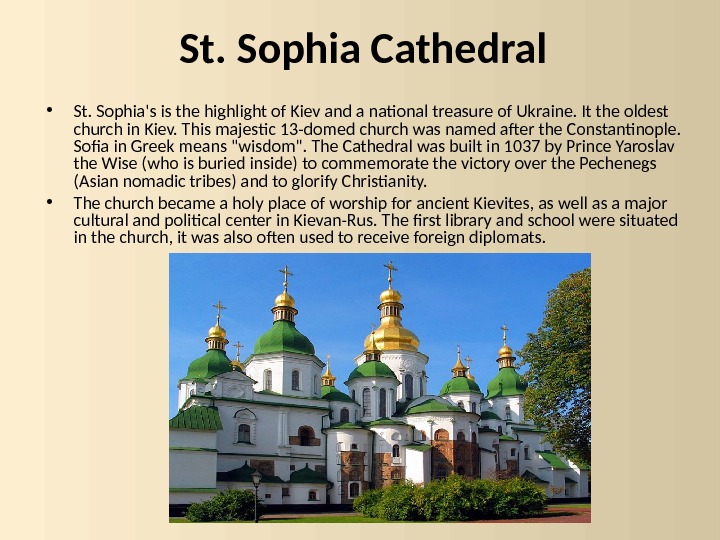 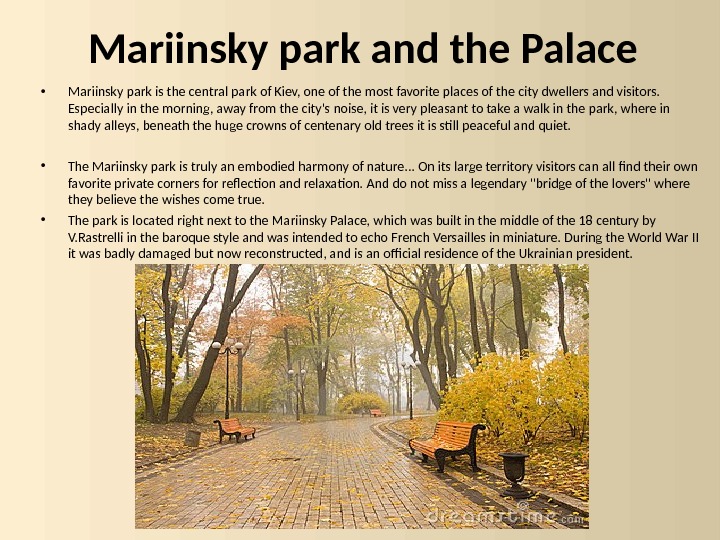 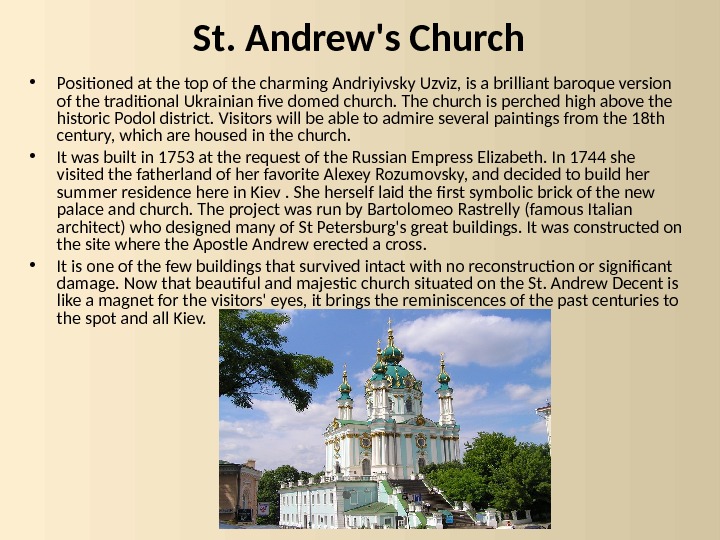 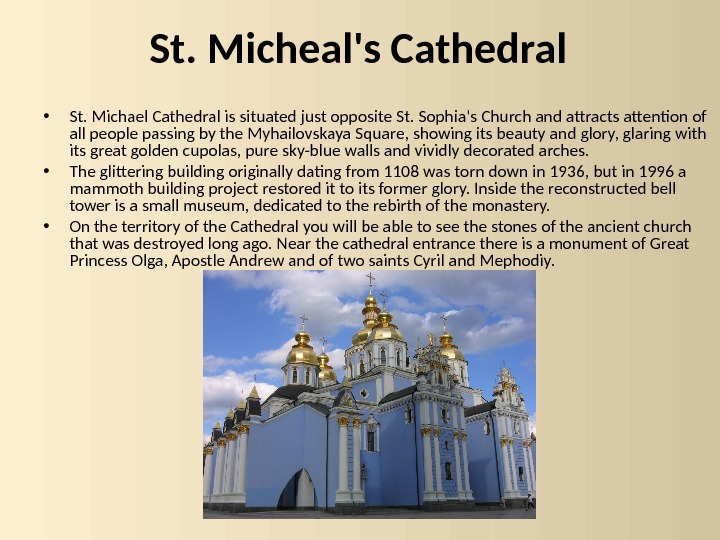 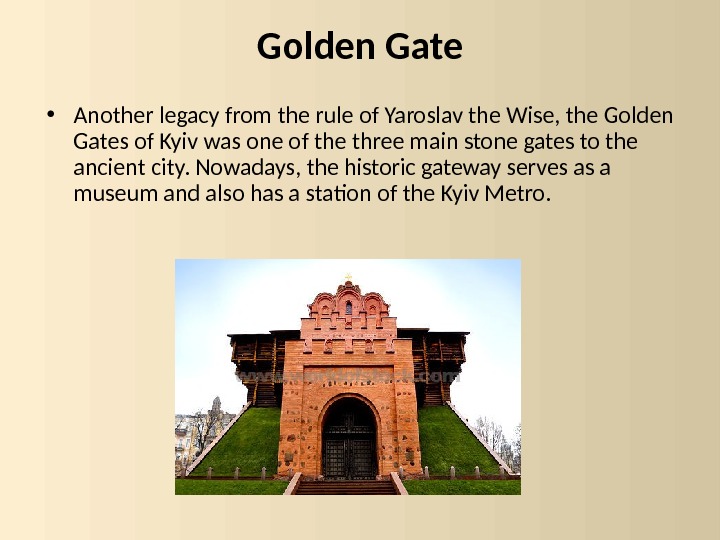 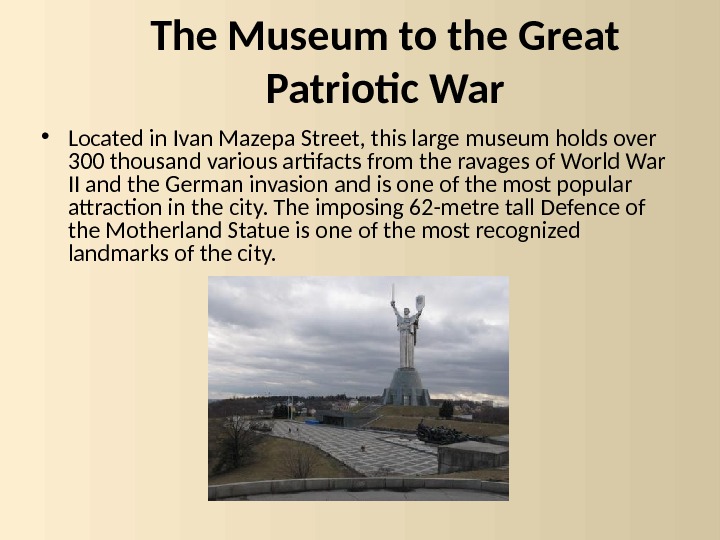 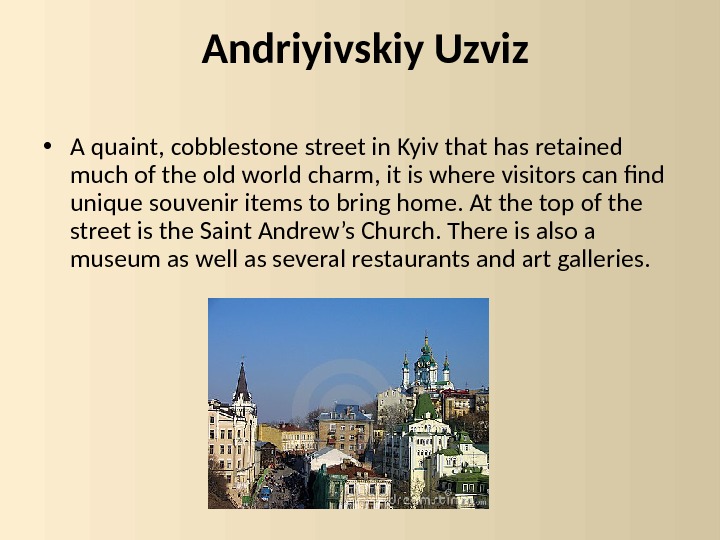 Скачать презентацию Places to go in Kyiv Made by students

Kreschatik street • The main and the most popular street of Kiev is Kreschatik street. It crosses the Starokyivsky and Pechersk administrative parts of the city connecting European and Bessarab Squares. • It is hard to believe that it was once a valley here, surrounded by a thick forest, with a brook across it. • From the North East the valley reached the Dnipro River and from the South East it went to the Lybid River. The valley’s name was Khreschata (Crossed) because of the many ravines that crossed it, and Kievan princes used to hunt there. Nowadays it is a beautiful wide boulevard planted with chestnuts. On weekends it is turned into a pedestrian area and becomes the best place for walking. • Closer to the end of the Kreschatik street there is a beautiful impressive Independence Square, Kiev’s central one. It’s the most popular dating place of Kievites and visitors.

Dnipro river and the embankments • Dnipro is the 3 d largest river in Europe. An hour-long trip on a comfortable boat gives a chance to observe the spectacular panoramic views of the city and admire the most scenic landscapes.

Kievo-Pecherskaya Lavra • Kievo-Pecherska Lavra a nine-hundred-year-old monastery. «Lavra» is considered an honorable title, which is given to the monasteries of extra-size and special religious importance. Kievo-Pecherskaya Lavra still preserves the caves in which several monks founded a monastery many centuries ago. • Monks used to live in these caves, and that is what the name of the Lavra derives from. («Pecherskaya» stands for pechery, that is» caves»). For a very long time it was truly spiritual center of Ukraine. The architectural complex of the Monastery the way it looks today is truly grandiose. On a sunny day one is almost dazzled by the reflections from the innumerable golden domes above churches and belfries. Most of the Lavra buildings date from the seventeenth and eighteenth centuries and are excellent examples of Ukrainian Baroque style in architecture and there is only one church in the Monastery that has been preserved from the twelfth century with very few architectural changes introduced since then.

Museum of Ukrainian Fine Arts • Museum of Ukrainian Fine Arts (1897 -1899). • Built in the style of a Greek temple with a 6 -column portico designed by Kiev architects V. Horodetsky and H. Boytsov, the museum’s 21 galleries contain valuable collections, generally unknown in the Western Europe or USA. The museum houses Ukrainian icons, paintings, and sculpture from the 14 th to early 20 th centuries. Works of T. Shevchenko, K. Kostandi, H. Narbut are among the exhibits of the museum.

St. Sophia Cathedral • St. Sophia’s is the highlight of Kiev and a national treasure of Ukraine. It the oldest church in Kiev. This majestic 13 -domed church was named after the Constantinople. Sofia in Greek means «wisdom». The Cathedral was built in 1037 by Prince Yaroslav the Wise (who is buried inside) to commemorate the victory over the Pechenegs (Asian nomadic tribes) and to glorify Christianity. • The church became a holy place of worship for ancient Kievites, as well as a major cultural and political center in Kievan-Rus. The first library and school were situated in the church, it was also often used to receive foreign diplomats.

Mariinsky park and the Palace • Mariinsky park is the central park of Kiev, one of the most favorite places of the city dwellers and visitors. Especially in the morning, away from the city’s noise, it is very pleasant to take a walk in the park, where in shady alleys, beneath the huge crowns of centenary old trees it is still peaceful and quiet. • The Mariinsky park is truly an embodied harmony of nature. . . On its large territory visitors can all find their own favorite private corners for reflection and relaxation. And do not miss a legendary «bridge of the lovers» where they believe the wishes come true. • The park is located right next to the Mariinsky Palace, which was built in the middle of the 18 century by V. Rastrelli in the baroque style and was intended to echo French Versailles in miniature. During the World War II it was badly damaged but now reconstructed, and is an official residence of the Ukrainian president.

St. Andrew’s Church • Positioned at the top of the charming Andriyivsky Uzviz, is a brilliant baroque version of the traditional Ukrainian five domed church. The church is perched high above the historic Podol district. Visitors will be able to admire several paintings from the 18 th century, which are housed in the church. • It was built in 1753 at the request of the Russian Empress Elizabeth. In 1744 she visited the fatherland of her favorite Alexey Rozumovsky, and decided to build her summer residence here in Kiev. She herself laid the first symbolic brick of the new palace and church. The project was run by Bartolomeo Rastrelly (famous Italian architect) who designed many of St Petersburg’s great buildings. It was constructed on the site where the Apostle Andrew erected a cross. • It is one of the few buildings that survived intact with no reconstruction or significant damage. Now that beautiful and majestic church situated on the St. Andrew Decent is like a magnet for the visitors’ eyes, it brings the reminiscences of the past centuries to the spot and all Kiev.

St. Micheal’s Cathedral • St. Michael Cathedral is situated just opposite St. Sophia’s Church and attracts attention of all people passing by the Myhailovskaya Square, showing its beauty and glory, glaring with its great golden cupolas, pure sky-blue walls and vividly decorated arches. • The glittering building originally dating from 1108 was torn down in 1936, but in 1996 a mammoth building project restored it to its former glory. Inside the reconstructed bell tower is a small museum, dedicated to the rebirth of the monastery. • On the territory of the Cathedral you will be able to see the stones of the ancient church that was destroyed long ago. Near the cathedral entrance there is a monument of Great Princess Olga, Apostle Andrew and of two saints Cyril and Mephodiy.

Golden Gate • Another legacy from the rule of Yaroslav the Wise, the Golden Gates of Kyiv was one of the three main stone gates to the ancient city. Nowadays, the historic gateway serves as a museum and also has a station of the Kyiv Metro.

The Museum to the Great Patriotic War • Located in Ivan Mazepa Street, this large museum holds over 300 thousand various artifacts from the ravages of World War II and the German invasion and is one of the most popular attraction in the city. The imposing 62 -metre tall Defence of the Motherland Statue is one of the most recognized landmarks of the city.

Andriyivskiy Uzviz • A quaint, cobblestone street in Kyiv that has retained much of the old world charm, it is where visitors can find unique souvenir items to bring home. At the top of the street is the Saint Andrew’s Church. There is also a museum as well as several restaurants and art galleries.