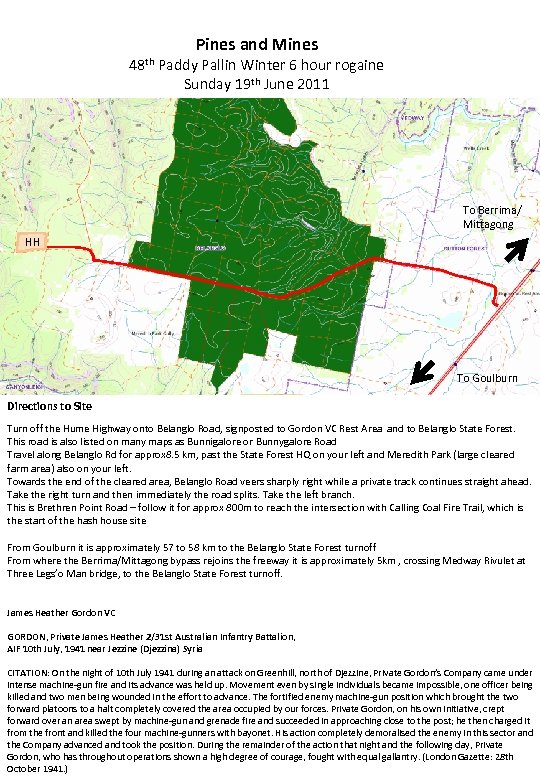 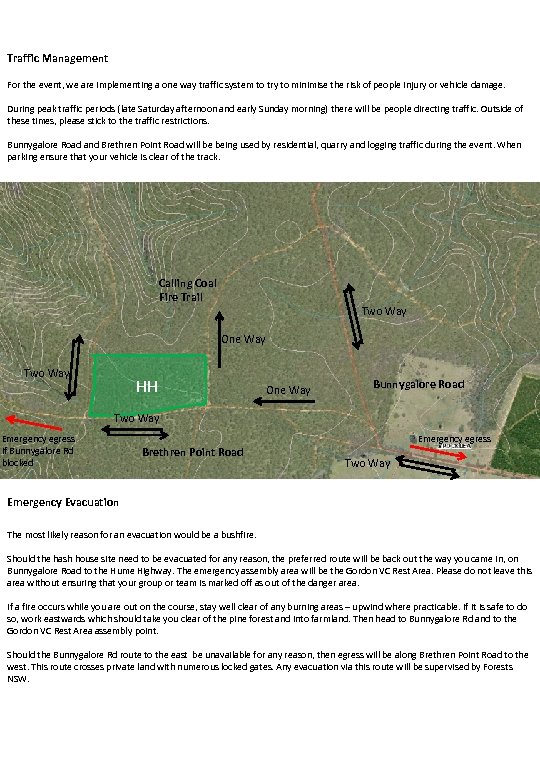 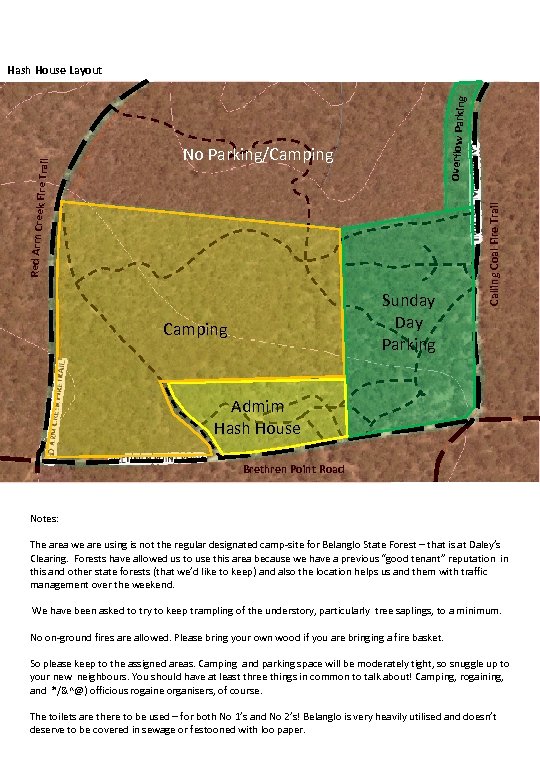 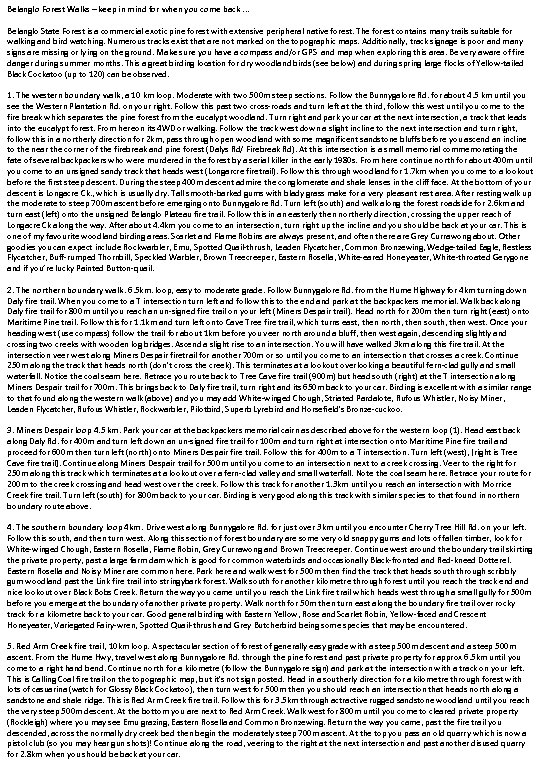 Pines and Mines 48 th Paddy Pallin Winter 6 hour rogaine Sunday 19 th June 2011 To Berrima/ Mittagong HH To Goulburn Directions to Site Turn off the Hume Highway onto Belanglo Road, signposted to Gordon VC Rest Area and to Belanglo State Forest. This road is also listed on many maps as Bunnigalore or Bunnygalore Road Travel along Belanglo Rd for approx 8. 5 km, past the State Forest HQ on your left and Meredith Park (large cleared farm area) also on your left. Towards the end of the cleared area, Belanglo Road veers sharply right while a private track continues straight ahead. Take the right turn and then immediately the road splits. Take the left branch. This is Brethren Point Road – follow it for approx 800 m to reach the intersection with Calling Coal Fire Trail, which is the start of the hash house site From Goulburn it is approximately 57 to 58 km to the Belanglo State Forest turnoff From where the Berrima/Mittagong bypass rejoins the freeway it is approximately 5 km , crossing Medway Rivulet at Three Legs’o Man bridge, to the Belanglo State Forest turnoff. James Heather Gordon VC GORDON, Private James Heather 2/31 st Australian Infantry Battalion, AIF 10 th July, 1941 near Jezzine (Djezzina) Syria CITATION: On the night of 10 th July 1941 during an attack on Greenhill, north of Djezzine, Private Gordon’s Company came under intense machine-gun fire and its advance was held up. Movement even by single individuals became impossible, one officer being killed and two men being wounded in the effort to advance. The fortified enemy machine-gun position which brought the two forward platoons to a halt completely covered the area occupied by our forces. Private Gordon, on his own initiative, crept forward over an area swept by machine-gun and grenade fire and succeeded in approaching close to the post; he then charged it from the front and killed the four machine-gunners with bayonet. His action completely demoralised the enemy in this sector and the Company advanced and took the position. During the remainder of the action that night and the following day, Private Gordon, who has throughout operations shown a high degree of courage, fought with equal gallantry. (London Gazette: 28 th October 1941. )

Traffic Management For the event, we are implementing a one way traffic system to try to minimise the risk of people injury or vehicle damage. During peak traffic periods (late Saturday afternoon and early Sunday morning) there will be people directing traffic. Outside of these times, please stick to the traffic restrictions. Bunnygalore Road and Brethren Point Road will be being used by residential, quarry and logging traffic during the event. When parking ensure that your vehicle is clear of the track. Calling Coal Fire Trail Two Way One Way Two Way HH One Way Bunnygalore Road Two Way Emergency egress If Bunnygalore Rd blocked Brethren Point Road Emergency egress Two Way Emergency Evacuation The most likely reason for an evacuation would be a bushfire. Should the hash house site need to be evacuated for any reason, the preferred route will be back out the way you came in, on Bunnygalore Road to the Hume Highway. The emergency assembly area will be the Gordon VC Rest Area. Please do not leave this area without ensuring that your group or team is marked off as out of the danger area. If a fire occurs while you are out on the course, stay well clear of any burning areas – upwind where practicable. If it is safe to do so, work eastwards which should take you clear of the pine forest and into farmland. Then head to Bunnygalore Rd and to the Gordon VC Rest Area assembly point. Should the Bunnygalore Rd route to the east be unavailable for any reason, then egress will be along Brethren Point Road to the west. This route crosses private land with numerous locked gates. Any evacuation via this route will be supervised by Forests NSW.

Sunday Day Parking Camping Calling Coal Fire Trail Overflow Parking No Parking/Camping Red Arm Creek Fire Trail Hash House Layout Admim Hash House Brethren Point Road Notes: The area we are using is not the regular designated camp-site for Belanglo State Forest – that is at Daley’s Clearing. Forests have allowed us to use this area because we have a previous “good tenant” reputation in this and other state forests (that we’d like to keep) and also the location helps us and them with traffic management over the weekend. We have been asked to try to keep trampling of the understory, particularly tree saplings, to a minimum. No on-ground fires are allowed. Please bring your own wood if you are bringing a fire basket. So please keep to the assigned areas. Camping and parking space will be moderately tight, so snuggle up to your new neighbours. You should have at least three things in common to talk about! Camping, rogaining, and */&^@) officious rogaine organisers, of course. The toilets are there to be used – for both No 1’s and No 2’s! Belanglo is very heavily utilised and doesn’t deserve to be covered in sewage or festooned with loo paper.