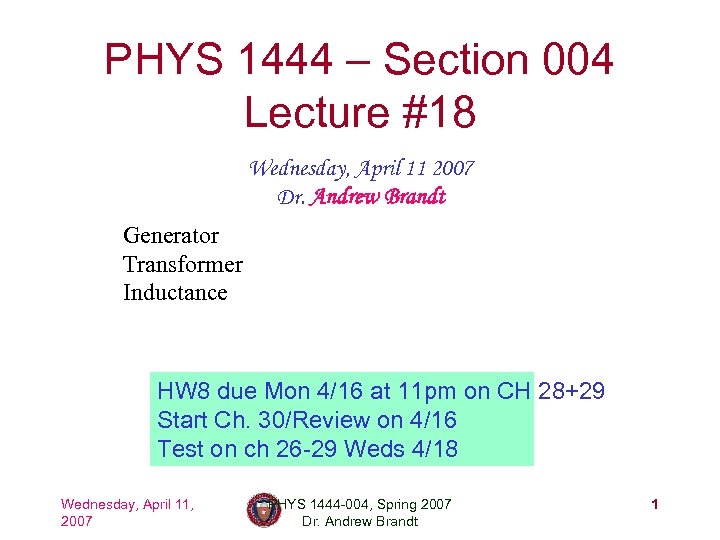 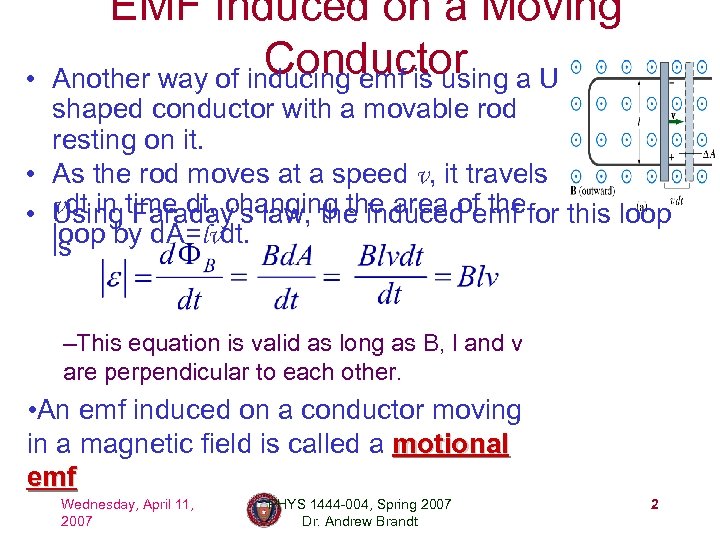 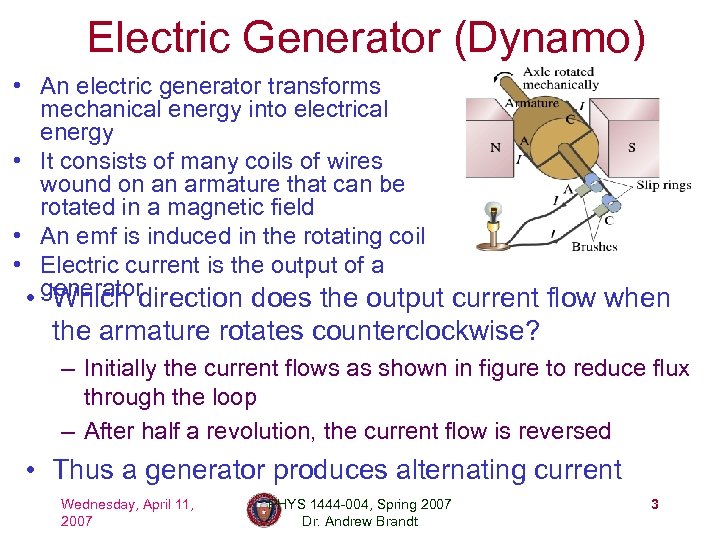 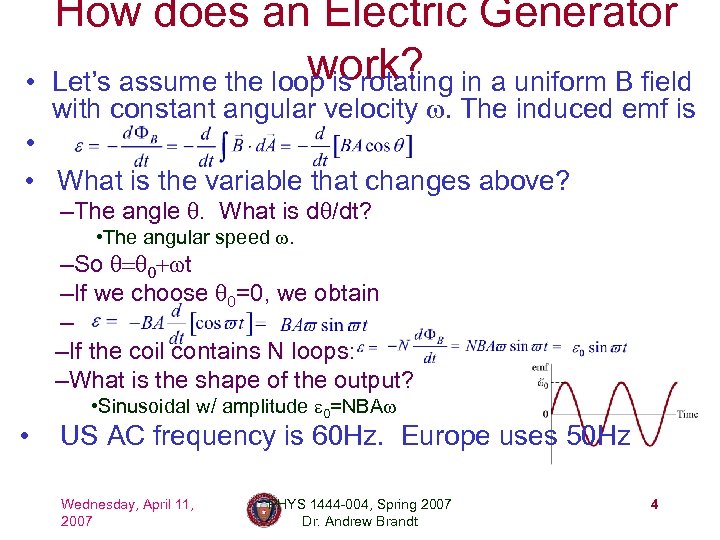 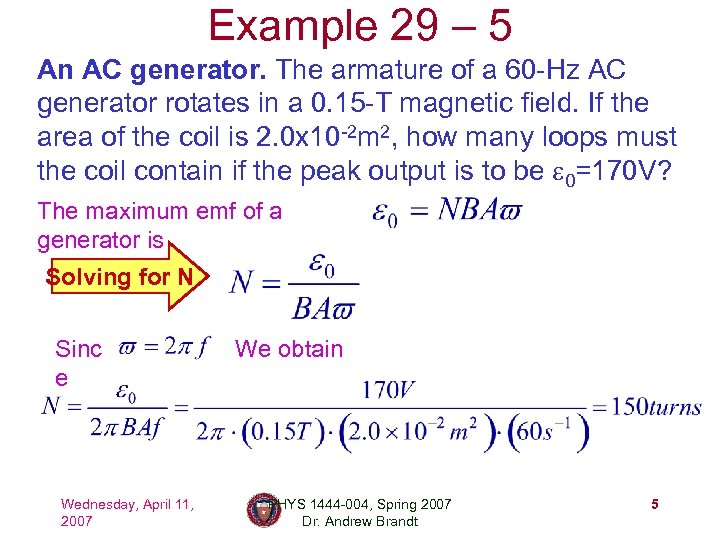 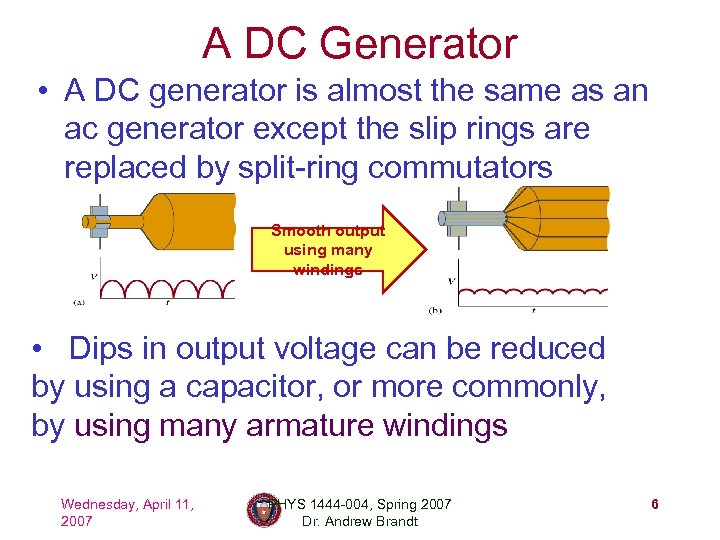 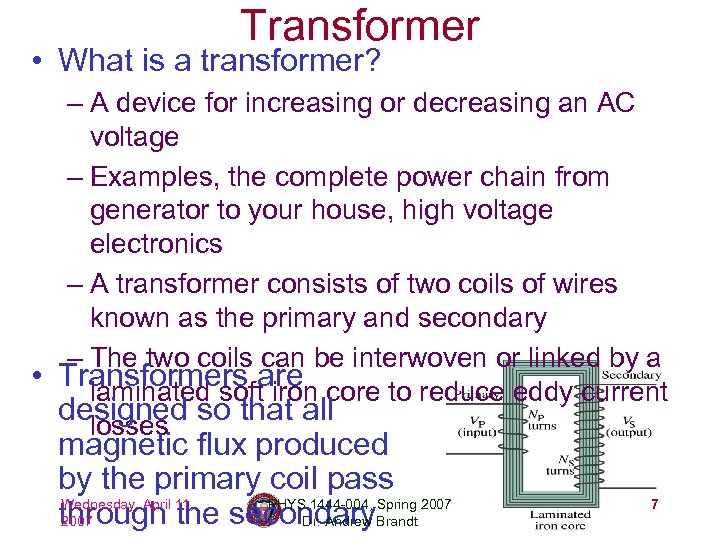 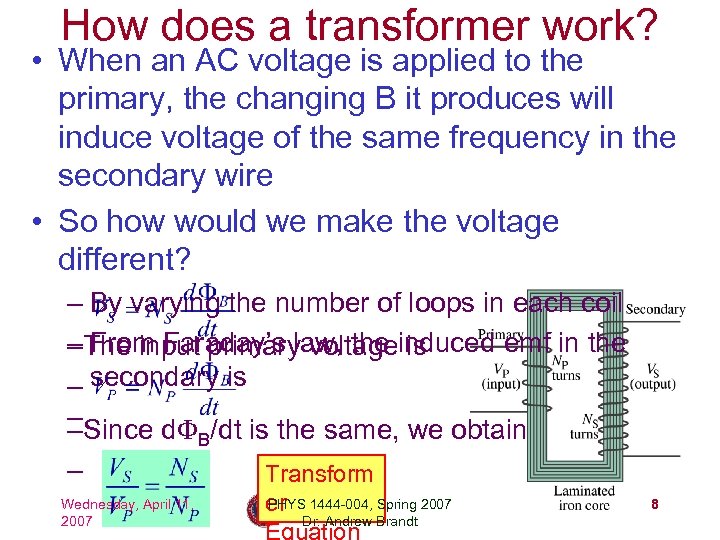 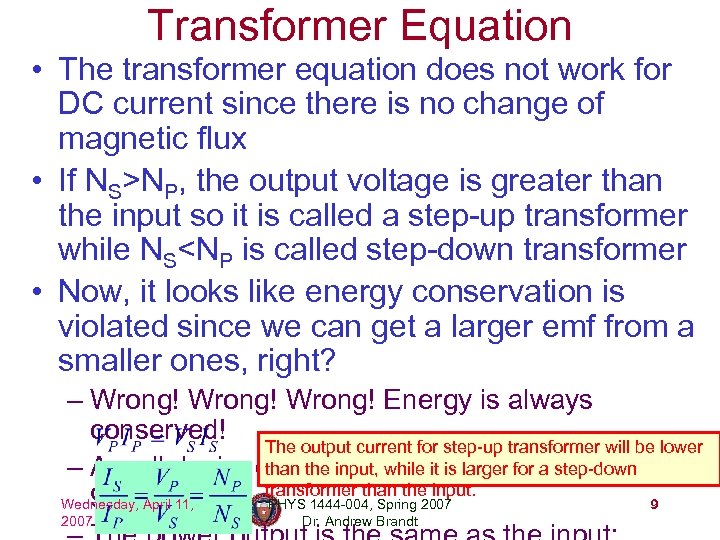 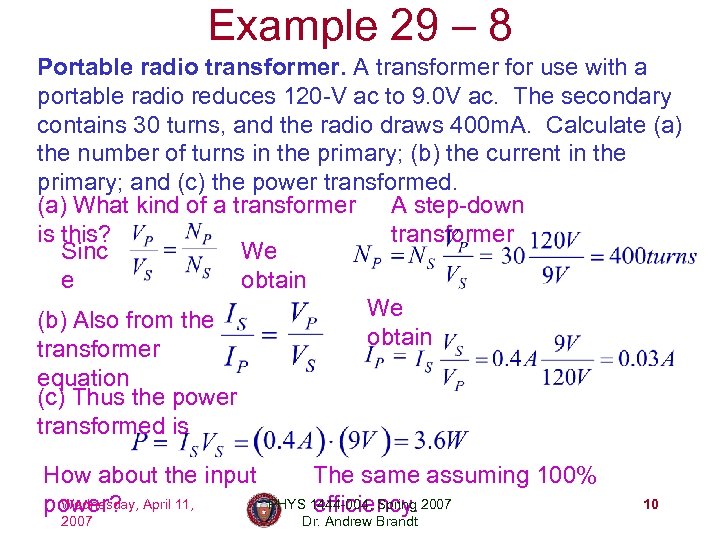 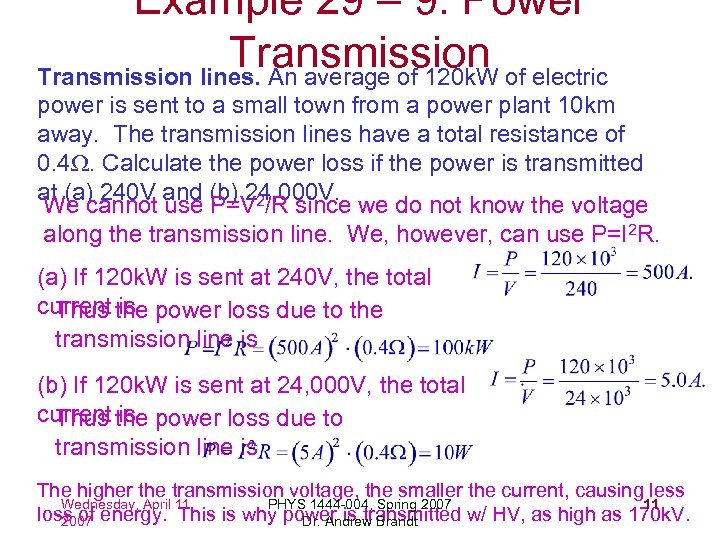 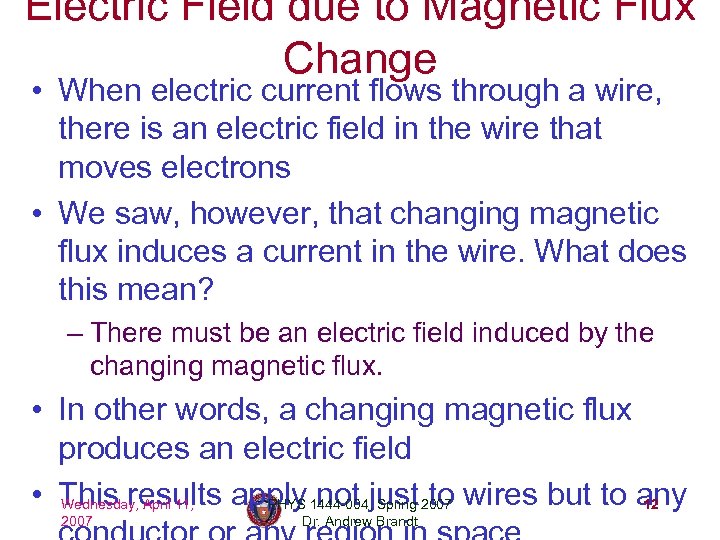 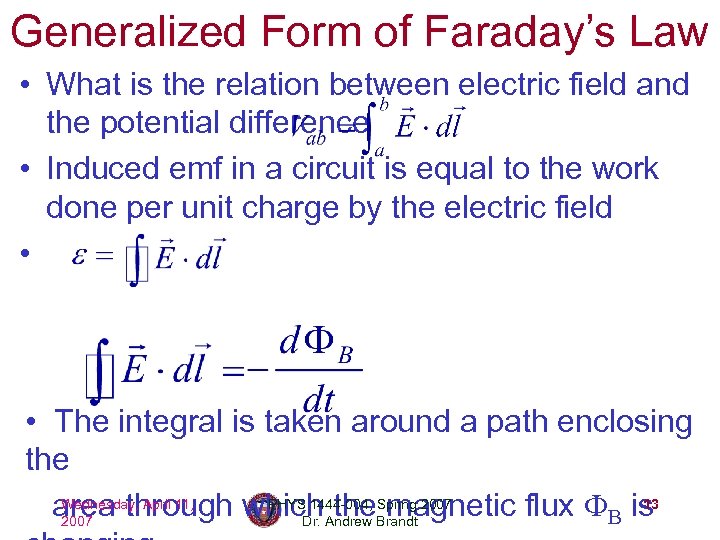 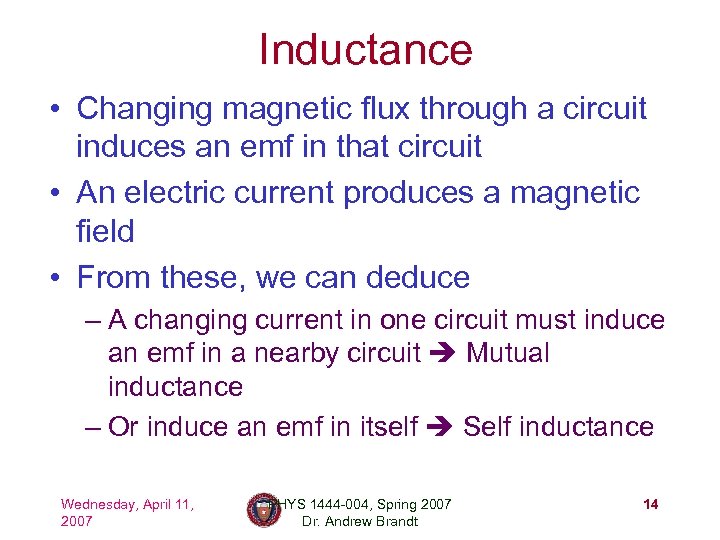 • EMF Induced on a Moving Conductor a U Another way of inducing emf is using shaped conductor with a movable rod resting on it. • As the rod moves at a speed v, it travels • vdt in time dt, changing the area of thefor this loop Using Faraday’s law, the induced emf loop by d. A=lvdt. is –This equation is valid as long as B, l and v are perpendicular to each other. • An emf induced on a conductor moving in a magnetic field is called a motional emf Wednesday, April 11, 2007 PHYS 1444 -004, Spring 2007 Dr. Andrew Brandt 2

Electric Generator (Dynamo) • An electric generator transforms mechanical energy into electrical energy • It consists of many coils of wires wound on an armature that can be rotated in a magnetic field • An emf is induced in the rotating coil • Electric current is the output of a • generatordirection does the output current flow when Which the armature rotates counterclockwise? – Initially the current flows as shown in figure to reduce flux through the loop – After half a revolution, the current flow is reversed • Thus a generator produces alternating current Wednesday, April 11, 2007 PHYS 1444 -004, Spring 2007 Dr. Andrew Brandt 3

A DC Generator • A DC generator is almost the same as an ac generator except the slip rings are replaced by split-ring commutators Smooth output using many windings • Dips in output voltage can be reduced by using a capacitor, or more commonly, by using many armature windings Wednesday, April 11, 2007 PHYS 1444 -004, Spring 2007 Dr. Andrew Brandt 6

Transformer • What is a transformer? – A device for increasing or decreasing an AC voltage – Examples, the complete power chain from generator to your house, high voltage electronics – A transformer consists of two coils of wires known as the primary and secondary – The two coils can be interwoven or linked by a • Transformers are core to reduce eddy current laminated soft iron designed so that all losses magnetic flux produced by the primary coil pass Wednesday, April 1444 -004, through 11, secondary. Brandt 2007 the PHYSDr. Andrew Spring 2007 7

How does a transformer work? • When an AC voltage is applied to the primary, the changing B it produces will induce voltage of the same frequency in the secondary wire • So how would we make the voltage different? – By varying the number of loops in each coil –The input primary voltageinduced emf in the From Faraday’s law, the is – secondary is –Since d. F /dt is the same, we obtain – B – Wednesday, April 11, 2007 Transform PHYS er 1444 -004, Spring 2007 Dr. Andrew Brandt Equation 8

Transformer Equation • The transformer equation does not work for DC current since there is no change of magnetic flux • If NS>NP, the output voltage is greater than the input so it is called a step-up transformer while NS

Generalized Form of Faraday’s Law • What is the relation between electric field and the potential difference • Induced emf in a circuit is equal to the work done per unit charge by the electric field • • The integral is taken around a path enclosing the Wednesday, April 11, PHYS 1444 -004, Spring 13 area through which Andrew Brandt 2007 the magnetic flux FB is 2007 Dr.

Inductance • Changing magnetic flux through a circuit induces an emf in that circuit • An electric current produces a magnetic field • From these, we can deduce – A changing current in one circuit must induce an emf in a nearby circuit Mutual inductance – Or induce an emf in itself Self inductance Wednesday, April 11, 2007 PHYS 1444 -004, Spring 2007 Dr. Andrew Brandt 14