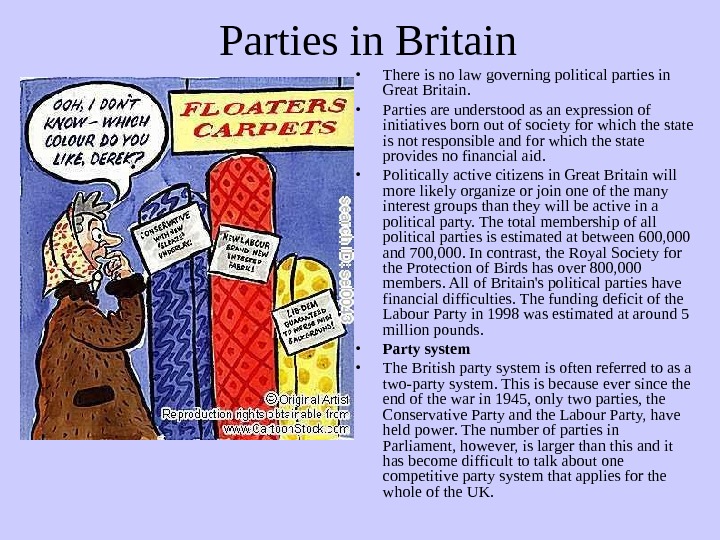 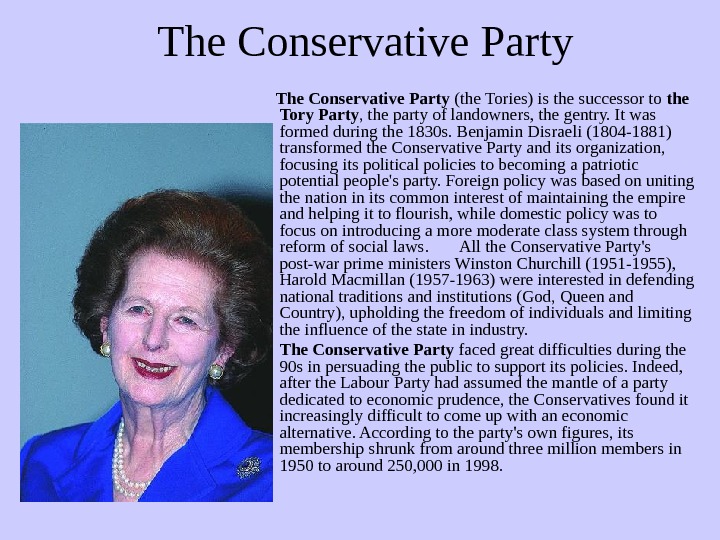 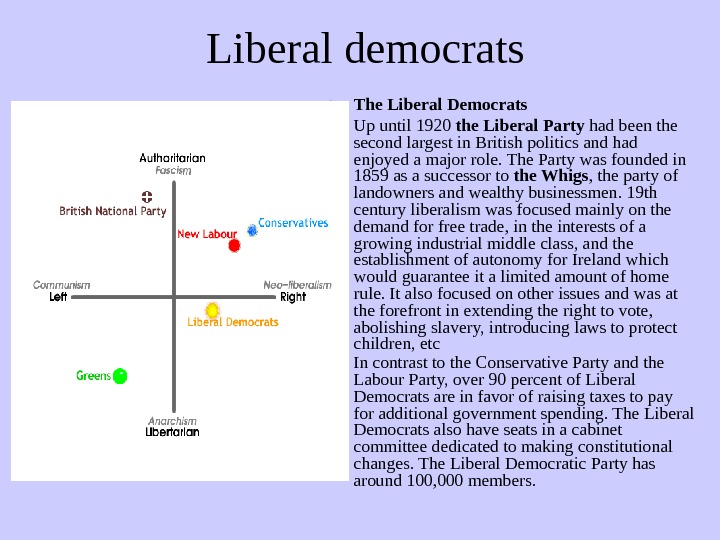 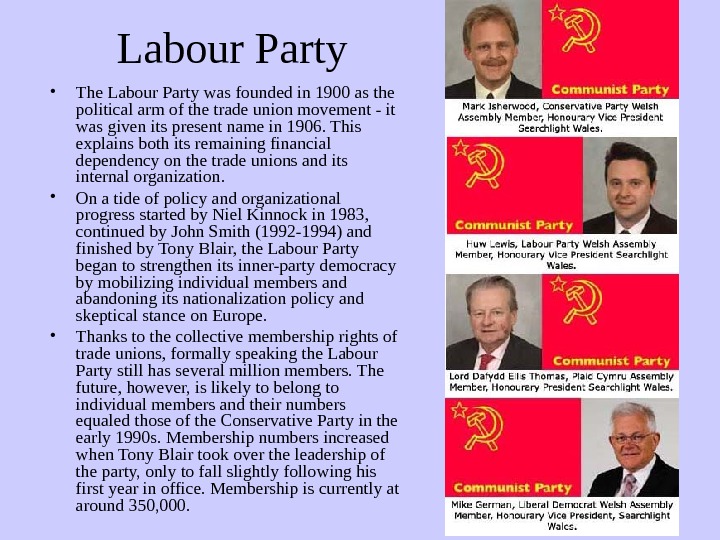 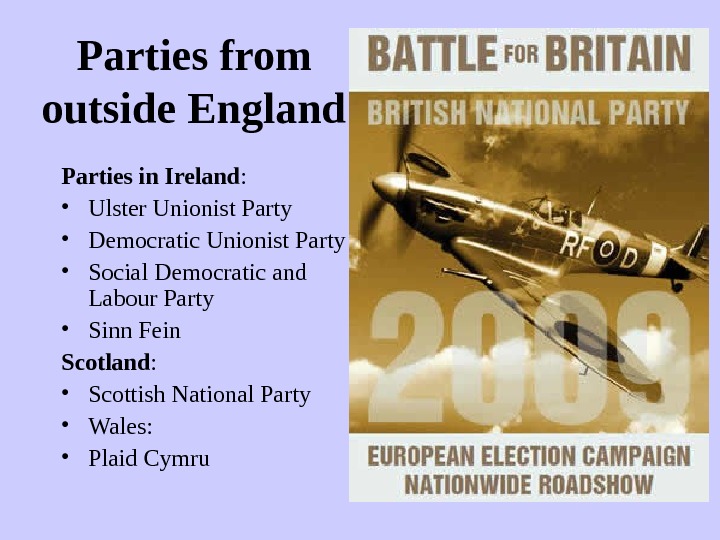 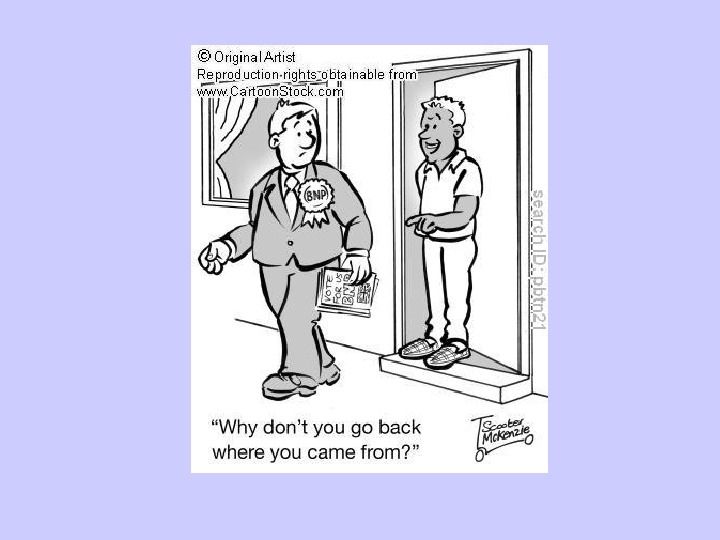 Скачать презентацию Parties in Britain • There is no

Описание презентации Parties in Britain • There is no по слайдам

Parties in Britain • There is no law governing political parties in Great Britain. • Parties are understood as an expression of initiatives born out of society for which the state is not responsible and for which the state provides no financial aid. • Politically active citizens in Great Britain will more likely organize or join one of the many interest groups than they will be active in a political party. The total membership of all political parties is estimated at between 600, 000 and 700, 000. In contrast, the Royal Society for the Protection of Birds has over 800, 000 members. All of Britain’s political parties have financial difficulties. The funding deficit of the Labour Party in 1998 was estimated at around 5 million pounds. • Party system • The British party system is often referred to as a two-party system. This is because ever since the end of the war in 1945, only two parties, the Conservative Party and the Labour Party, have held power. The number of parties in Parliament, however, is larger than this and it has become difficult to talk about one competitive party system that applies for the whole of the UK.

The Conservative Party The Conservative Party (the Tories) is the successor to the Tory Party , the party of landowners, the gentry. It was formed during the 1830 s. Benjamin Disraeli (1804 -1881) transformed the Conservative Party and its organization, focusing its political policies to becoming a patriotic potential people’s party. Foreign policy was based on uniting the nation in its common interest of maintaining the empire and helping it to flourish, while domestic policy was to focus on introducing a more moderate class system through reform of social laws. All the Conservative Party’s post-war prime ministers Winston Churchill (1951 -1955), Harold Macmillan (1957 -1963) were interested in defending national traditions and institutions (God, Queen and Country), upholding the freedom of individuals and limiting the influence of the state in industry. The Conservative Party faced great difficulties during the 90 s in persuading the public to support its policies. Indeed, after the Labour Party had assumed the mantle of a party dedicated to economic prudence, the Conservatives found it increasingly difficult to come up with an economic alternative. According to the party’s own figures, its membership shrunk from around three million members in 1950 to around 250, 000 in 1998.

Liberal democrats • The Liberal Democrats • Up until 1920 the Liberal Party had been the second largest in British politics and had enjoyed a major role. The Party was founded in 1859 as a successor to the Whigs , the party of landowners and wealthy businessmen. 19 th century liberalism was focused mainly on the demand for free trade, in the interests of a growing industrial middle class, and the establishment of autonomy for Ireland which would guarantee it a limited amount of home rule. It also focused on other issues and was at the forefront in extending the right to vote, abolishing slavery, introducing laws to protect children, etc • In contrast to the Conservative Party and the Labour Party, over 90 percent of Liberal Democrats are in favor of raising taxes to pay for additional government spending. The Liberal Democrats also have seats in a cabinet committee dedicated to making constitutional changes. The Liberal Democratic Party has around 100, 000 members.

Labour Party • The Labour Party was founded in 1900 as the political arm of the trade union movement — it was given its present name in 1906. This explains both its remaining financial dependency on the trade unions and its internal organization. • On a tide of policy and organizational progress started by Niel Kinnock in 1983, continued by John Smith (1992 -1994) and finished by Tony Blair, the Labour Party began to strengthen its inner-party democracy by mobilizing individual members and abandoning its nationalization policy and skeptical stance on Europe. • Thanks to the collective membership rights of trade unions, formally speaking the Labour Party still has several million members. The future, however, is likely to belong to individual members and their numbers equaled those of the Conservative Party in the early 1990 s. Membership numbers increased when Tony Blair took over the leadership of the party, only to fall slightly following his first year in office. Membership is currently at around 350, 000.