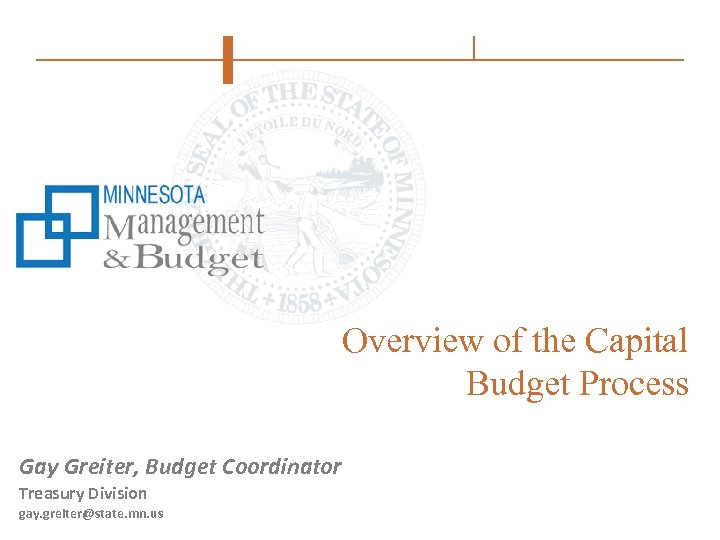 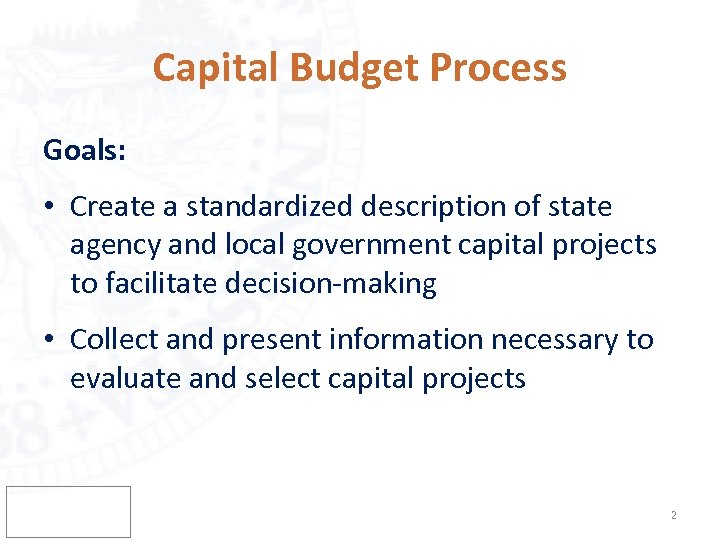 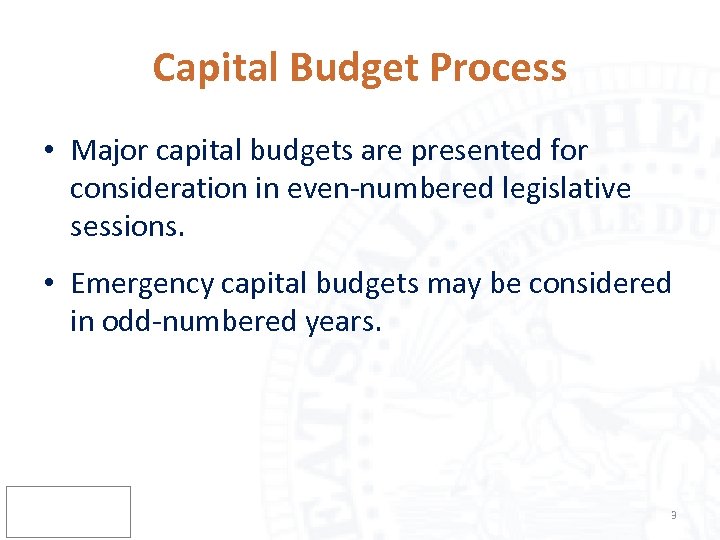 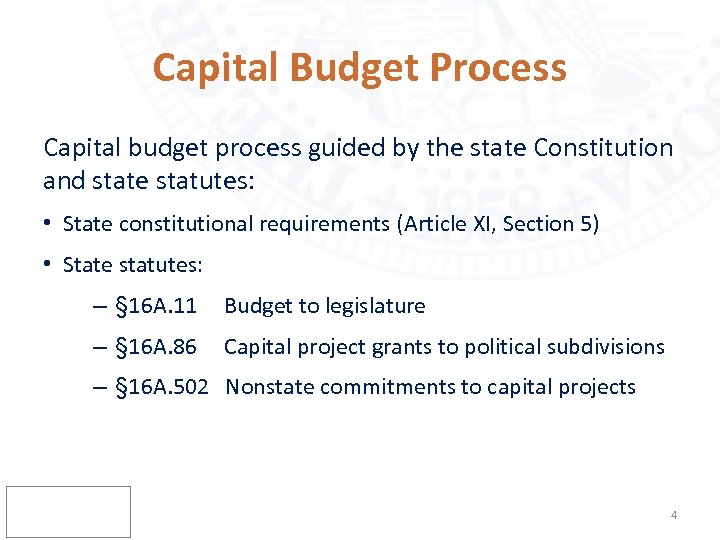 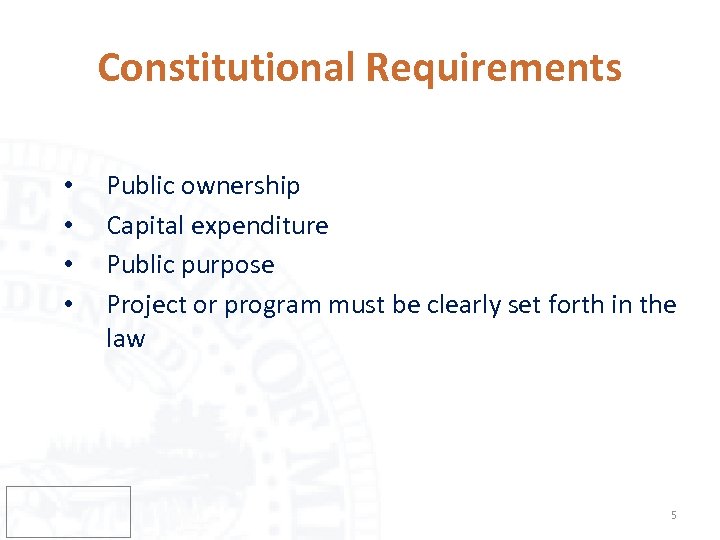 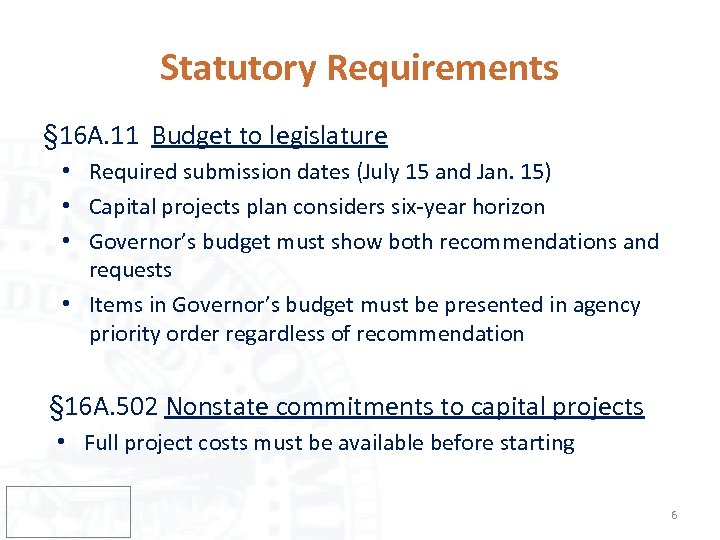 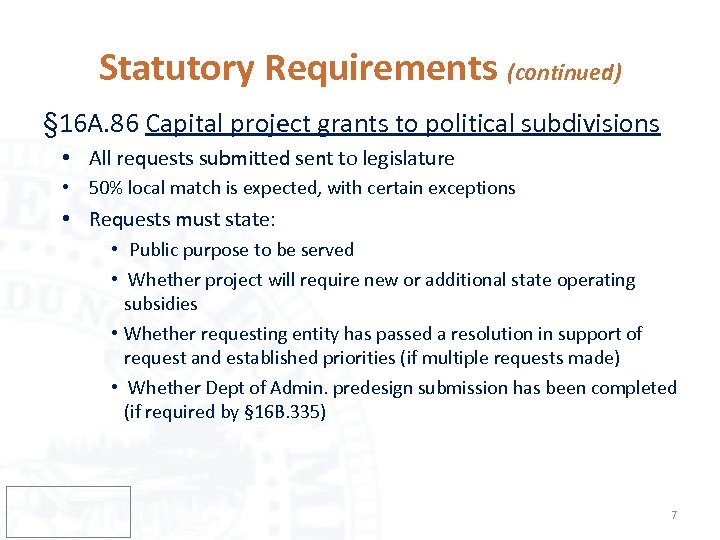 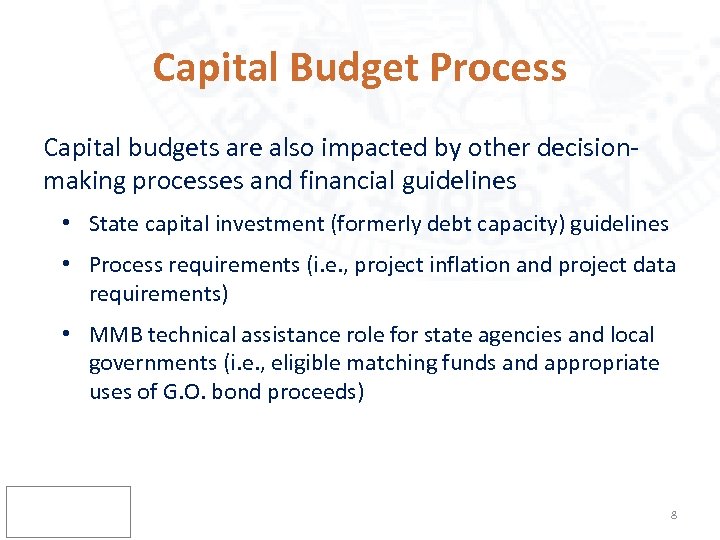 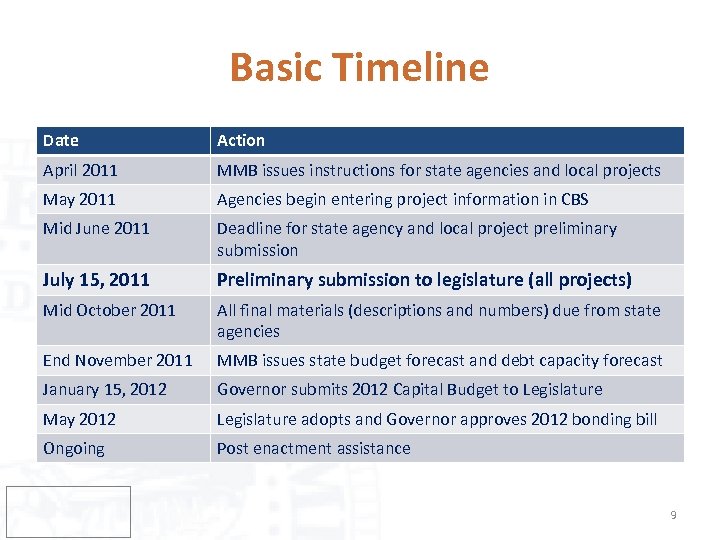 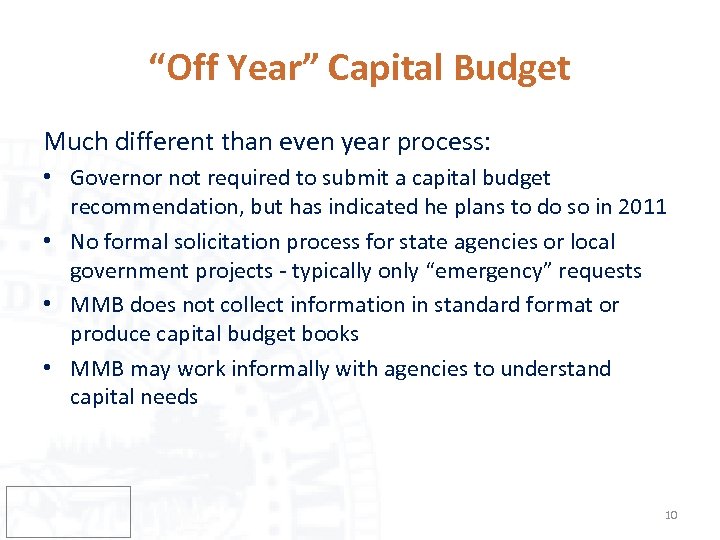 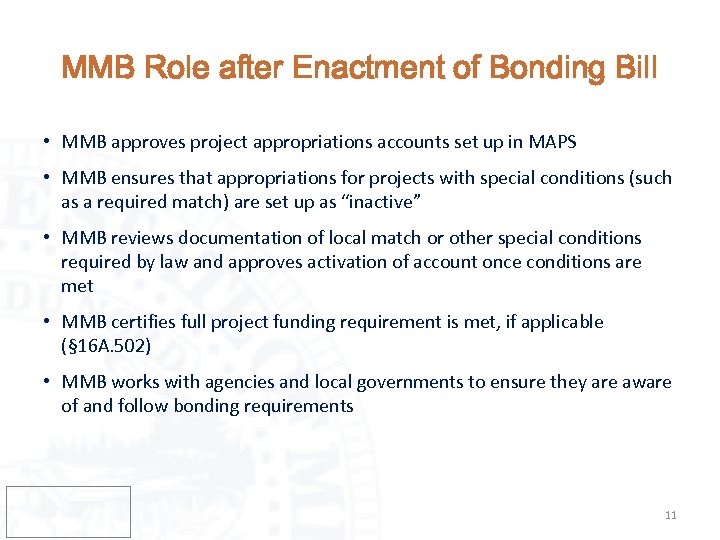 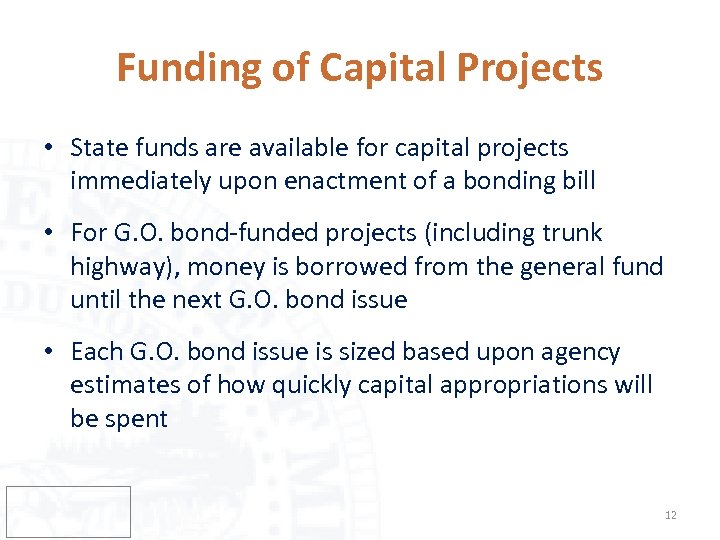 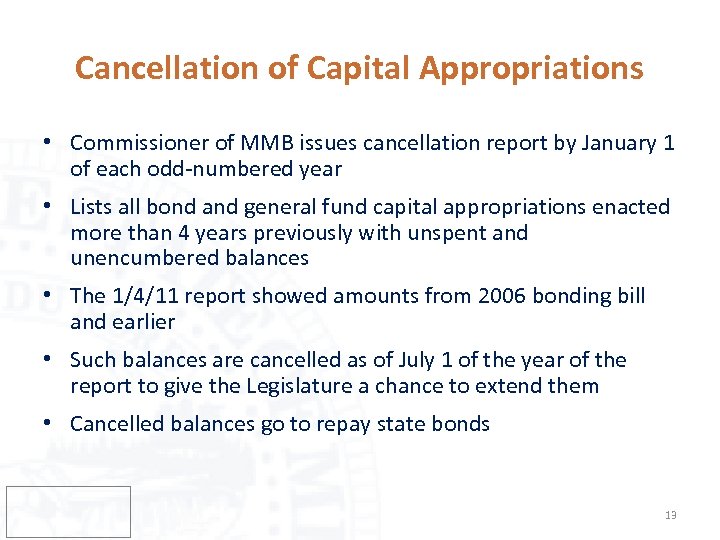 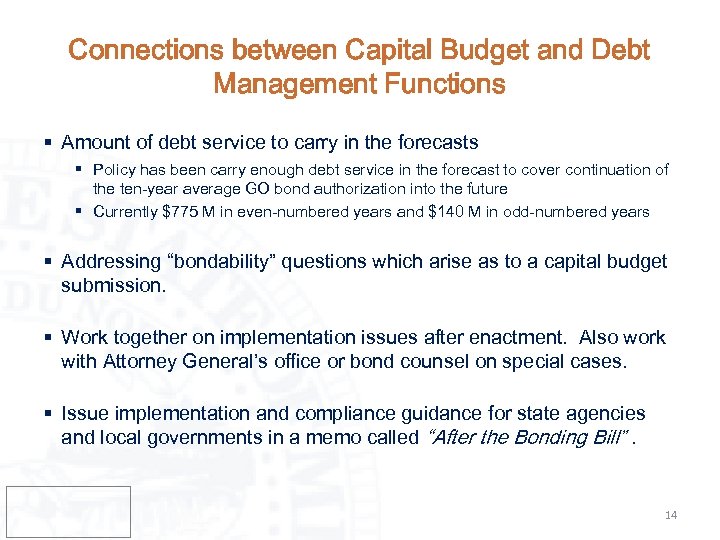 Statutory Requirements § 16 A. 11 Budget to legislature • Required submission dates (July 15 and Jan. 15) • Capital projects plan considers six-year horizon • Governor’s budget must show both recommendations and requests • Items in Governor’s budget must be presented in agency priority order regardless of recommendation § 16 A. 502 Nonstate commitments to capital projects • Full project costs must be available before starting 6

Statutory Requirements (continued) § 16 A. 86 Capital project grants to political subdivisions • All requests submitted sent to legislature • 50% local match is expected, with certain exceptions • Requests must state: • Public purpose to be served • Whether project will require new or additional state operating subsidies • Whether requesting entity has passed a resolution in support of request and established priorities (if multiple requests made) • Whether Dept of Admin. predesign submission has been completed (if required by § 16 B. 335) 7

“Off Year” Capital Budget Much different than even year process: • Governor not required to submit a capital budget recommendation, but has indicated he plans to do so in 2011 • No formal solicitation process for state agencies or local government projects - typically only “emergency” requests • MMB does not collect information in standard format or produce capital budget books • MMB may work informally with agencies to understand capital needs 10

MMB Role after Enactment of Bonding Bill • MMB approves project appropriations accounts set up in MAPS • MMB ensures that appropriations for projects with special conditions (such as a required match) are set up as “inactive” • MMB reviews documentation of local match or other special conditions required by law and approves activation of account once conditions are met • MMB certifies full project funding requirement is met, if applicable (§ 16 A. 502) • MMB works with agencies and local governments to ensure they are aware of and follow bonding requirements 11

Funding of Capital Projects • State funds are available for capital projects immediately upon enactment of a bonding bill • For G. O. bond-funded projects (including trunk highway), money is borrowed from the general fund until the next G. O. bond issue • Each G. O. bond issue is sized based upon agency estimates of how quickly capital appropriations will be spent 12

Connections between Capital Budget and Debt Management Functions § Amount of debt service to carry in the forecasts § Policy has been carry enough debt service in the forecast to cover continuation of the ten-year average GO bond authorization into the future § Currently $775 M in even-numbered years and $140 M in odd-numbered years § Addressing “bondability” questions which arise as to a capital budget submission. § Work together on implementation issues after enactment. Also work with Attorney General’s office or bond counsel on special cases. § Issue implementation and compliance guidance for state agencies and local governments in a memo called “After the Bonding Bill”. 14