Over centuries the children s education was traditionally religious 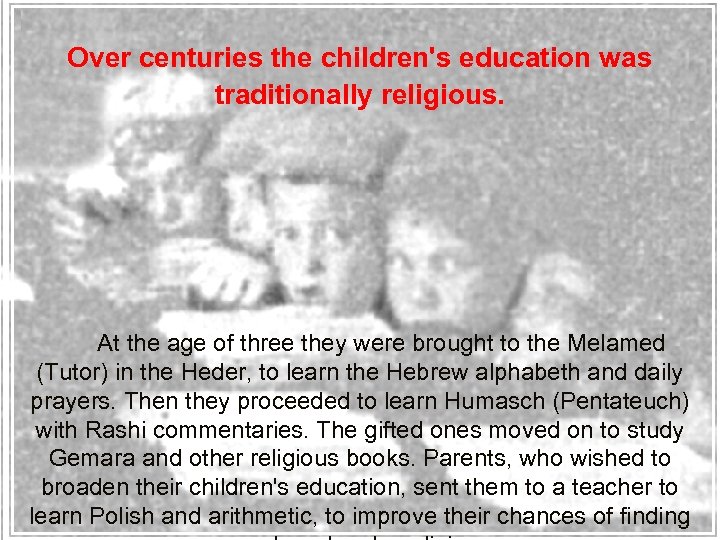 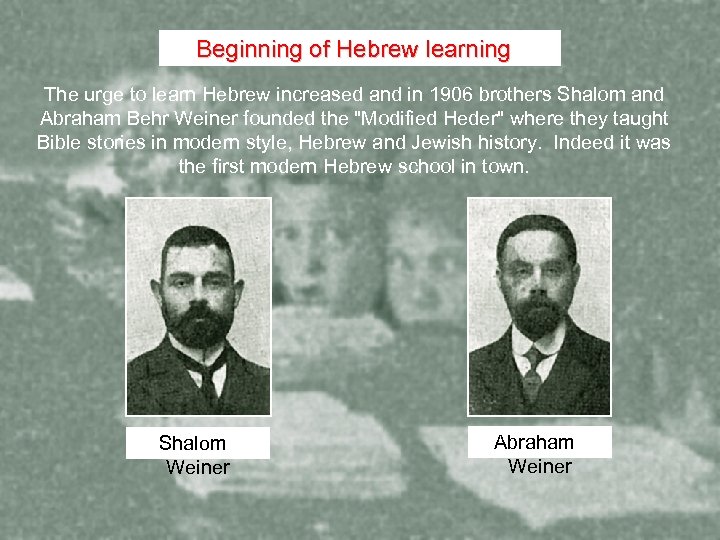 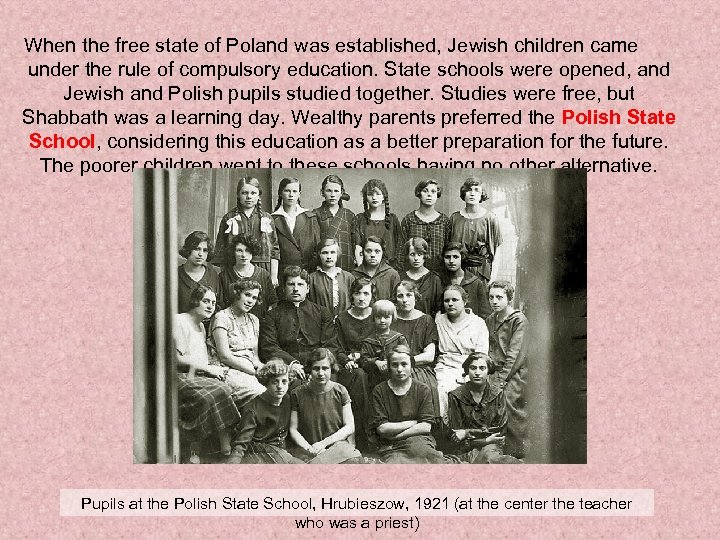 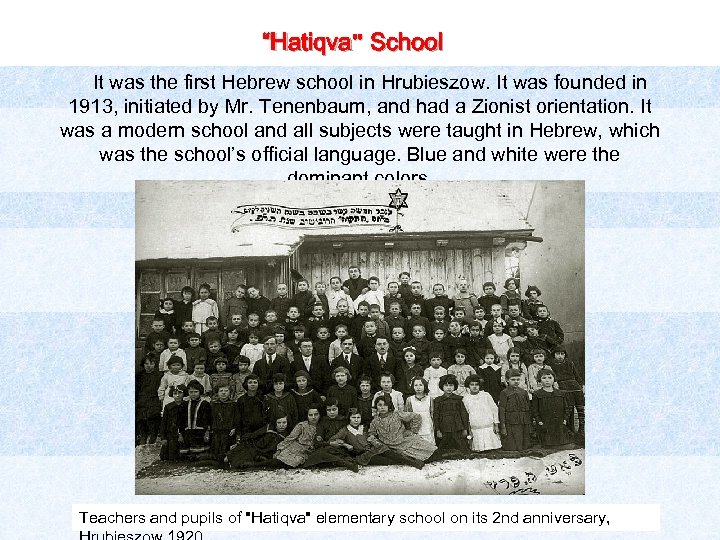 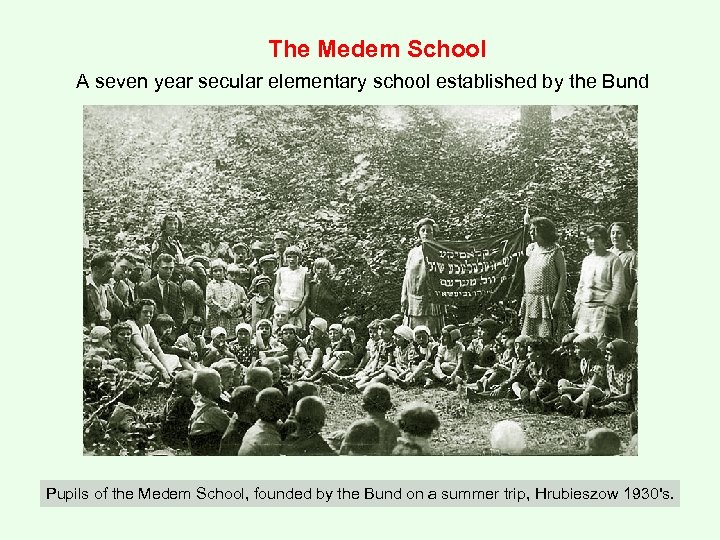 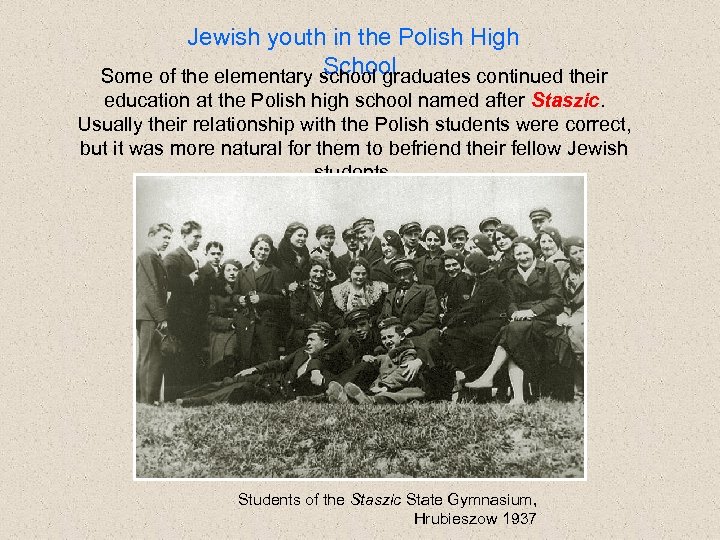 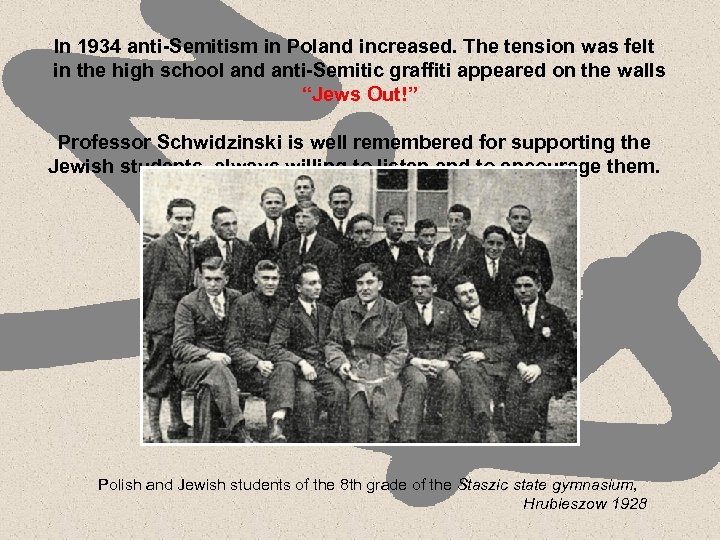 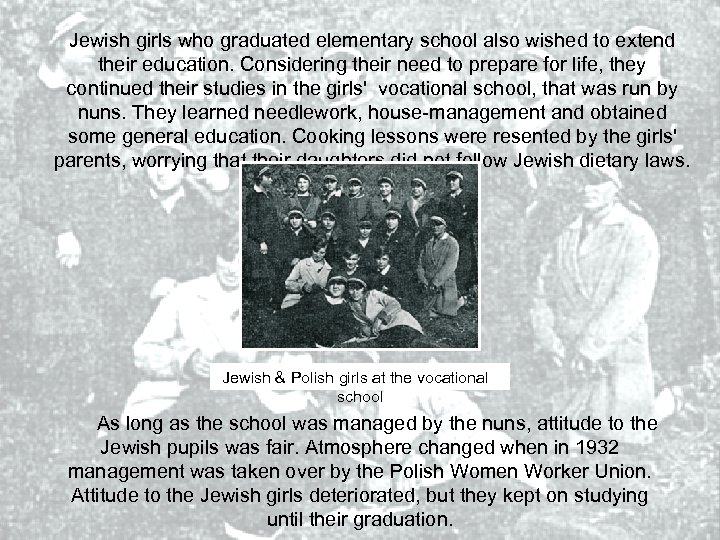 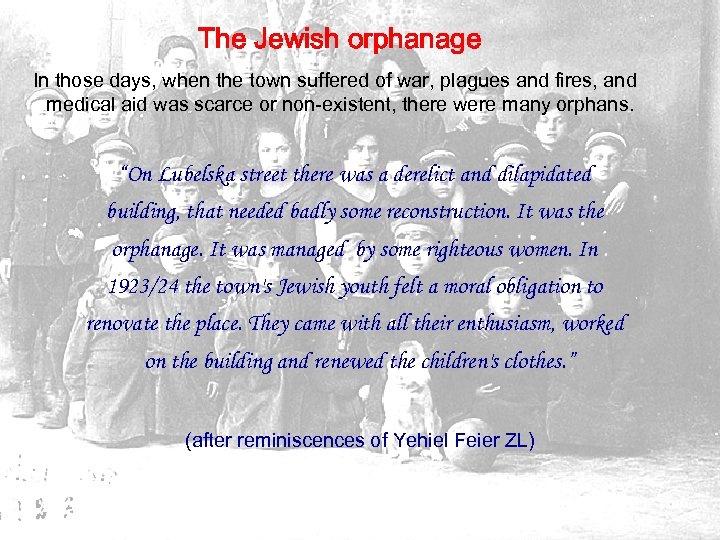 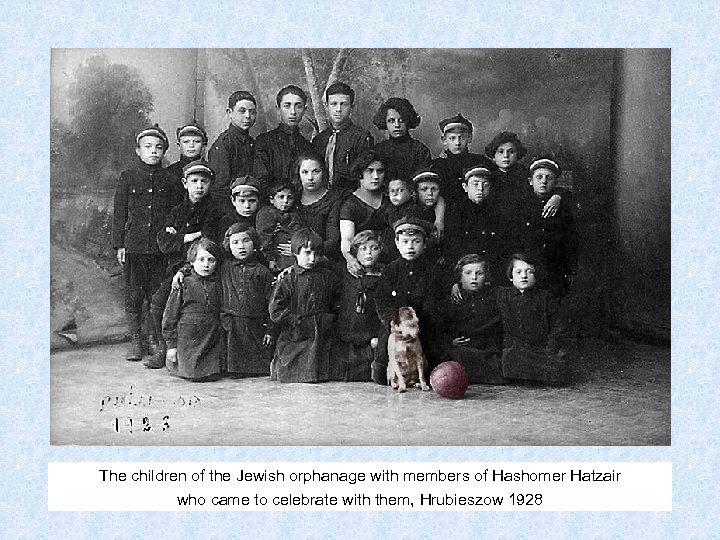 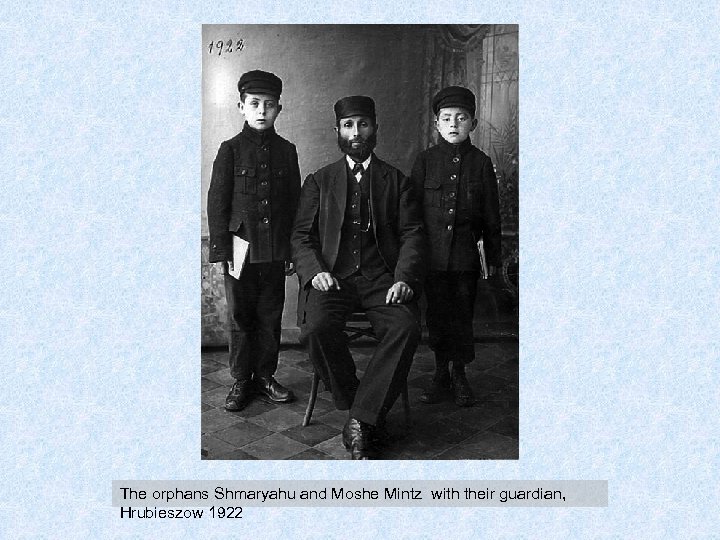 Over centuries the children's education was traditionally religious. At the age of three they were brought to the Melamed (Tutor) in the Heder, to learn the Hebrew alphabeth and daily prayers. Then they proceeded to learn Humasch (Pentateuch) with Rashi commentaries. The gifted ones moved on to study Gemara and other religious books. Parents, who wished to broaden their children's education, sent them to a teacher to learn Polish and arithmetic, to improve their chances of finding

Beginning of Hebrew learning The urge to learn Hebrew increased and in 1906 brothers Shalom and Abraham Behr Weiner founded the "Modified Heder" where they taught Bible stories in modern style, Hebrew and Jewish history. Indeed it was the first modern Hebrew school in town. Shalom Weiner Abraham Weiner

When the free state of Poland was established, Jewish children came under the rule of compulsory education. State schools were opened, and Jewish and Polish pupils studied together. Studies were free, but Shabbath was a learning day. Wealthy parents preferred the Polish State School, considering this education as a better preparation for the future. The poorer children went to these schools having no other alternative. Pupils at the Polish State School, Hrubieszow, 1921 (at the center the teacher who was a priest)

“Hatiqva" School It was the first Hebrew school in Hrubieszow. It was founded in 1913, initiated by Mr. Tenenbaum, and had a Zionist orientation. It was a modern school and all subjects were taught in Hebrew, which was the school’s official language. Blue and white were the dominant colors. Teachers and pupils of "Hatiqva" elementary school on its 2 nd anniversary,

“Tel Chay” School The Tel Chay school was founded in 1927, originally as a "Tarbut" school. It was later taken over by ZS (Zionist Socialists). It was a seven years' elementary school, where children received education as well as help, food, school books and anything they needed for their studies, because most of the children came from needy families. The school premises were open also in the afternoon, and pupils could do their homework, play and read books in the library. Hundreds of children attended the Tel Chay school, and for many of them the natural process would be going to the Zionist youth movements like "He-Halutz" and emigrating to Eretz Israel. Kindergarten of Tel Chay schooll

Jewish youth in the Polish High School Some of the elementary school graduates continued their education at the Polish high school named after Staszic. Usually their relationship with the Polish students were correct, but it was more natural for them to befriend their fellow Jewish students. Students of the Staszic State Gymnasium, Hrubieszow 1937

In 1934 anti-Semitism in Poland increased. The tension was felt in the high school and anti-Semitic graffiti appeared on the walls “Jews Out!” Professor Schwidzinski is well remembered for supporting the Jewish students, always willing to listen and to encourage them. Polish and Jewish students of the 8 th grade of the Staszic state gymnasium, Hrubieszow 1928

Jewish girls who graduated elementary school also wished to extend their education. Considering their need to prepare for life, they continued their studies in the girls' vocational school, that was run by nuns. They learned needlework, house-management and obtained some general education. Cooking lessons were resented by the girls' parents, worrying that their daughters did not follow Jewish dietary laws. Jewish & Polish girls at the vocational school As long as the school was managed by the nuns, attitude to the Jewish pupils was fair. Atmosphere changed when in 1932 management was taken over by the Polish Women Worker Union. Attitude to the Jewish girls deteriorated, but they kept on studying until their graduation.

The Jewish orphanage In those days, when the town suffered of war, plagues and fires, and medical aid was scarce or non-existent, there were many orphans. “On Lubelska street there was a derelict and dilapidated building, that needed badly some reconstruction. It was the orphanage. It was managed by some righteous women. In 1923/24 the town's Jewish youth felt a moral obligation to renovate the place. They came with all their enthusiasm, worked on the building and renewed the children's clothes. ” (after reminiscences of Yehiel Feier ZL)

The children of the Jewish orphanage with members of Hashomer Hatzair who came to celebrate with them, Hrubieszow 1928

Letter to the youth of Hashomer Hatzair, among them Shmaryahu Mintz, in appreciation and gratitude for their help and contribution to the renovation and maintenance of the orphanage. ( The letter was sent by Mr. Finkelstein, bursar of the orphanage)

The orphans Shmaryahu and Moshe Mintz with their guardian, Hrubieszow 1922