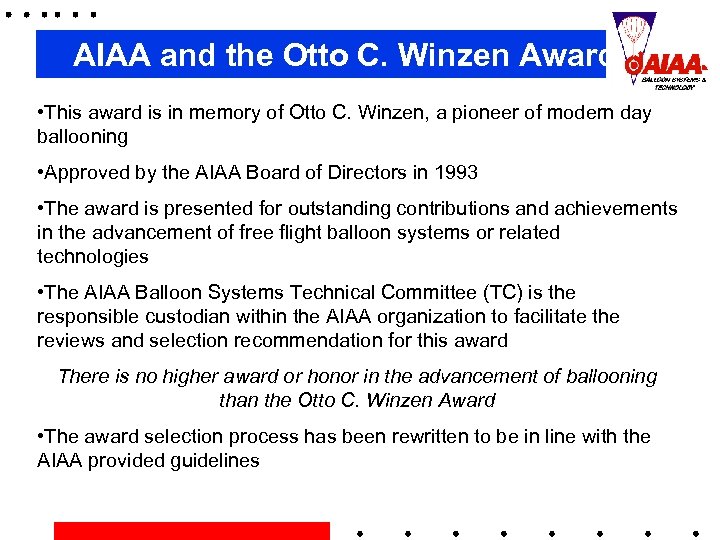 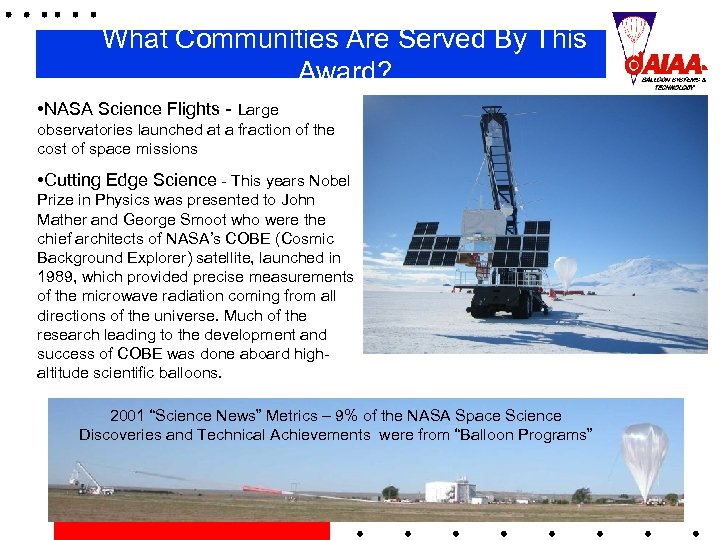 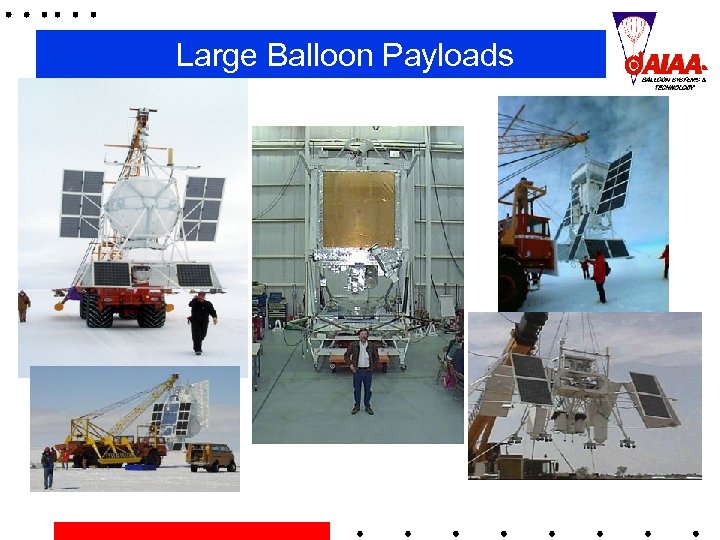 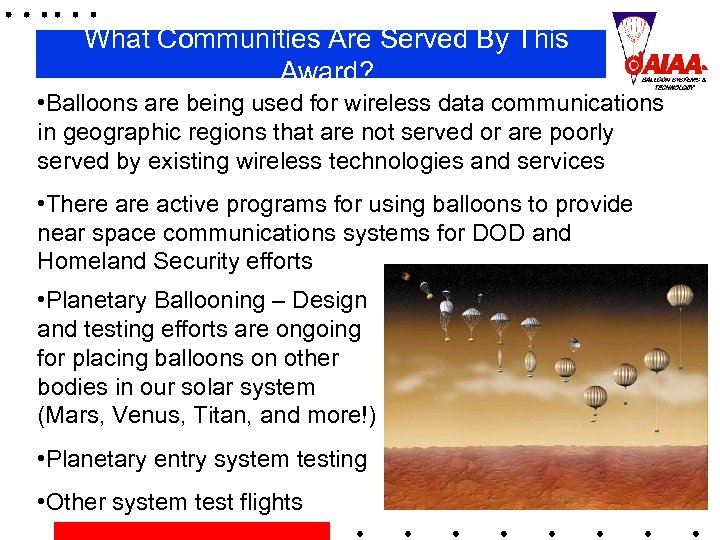 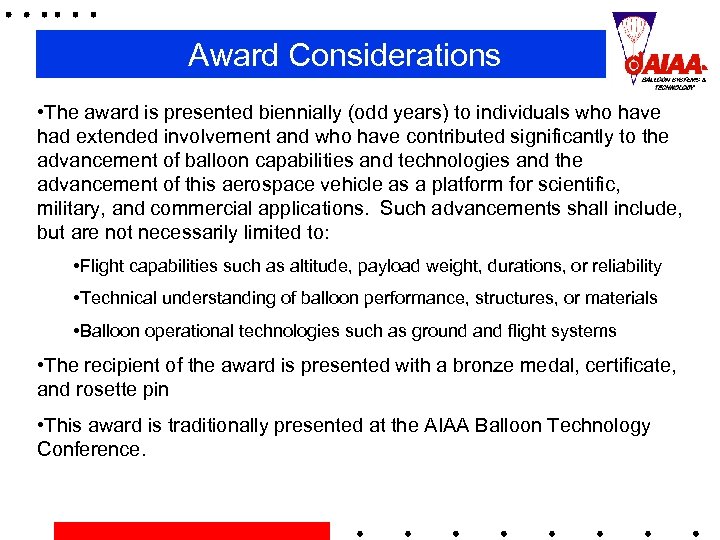 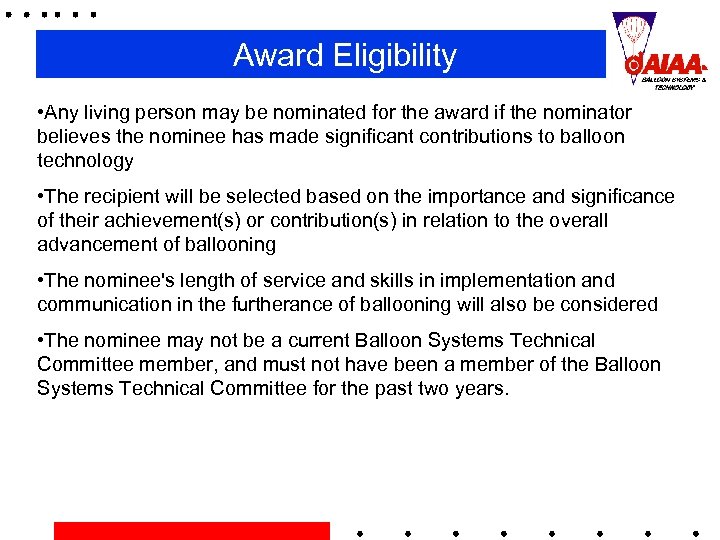 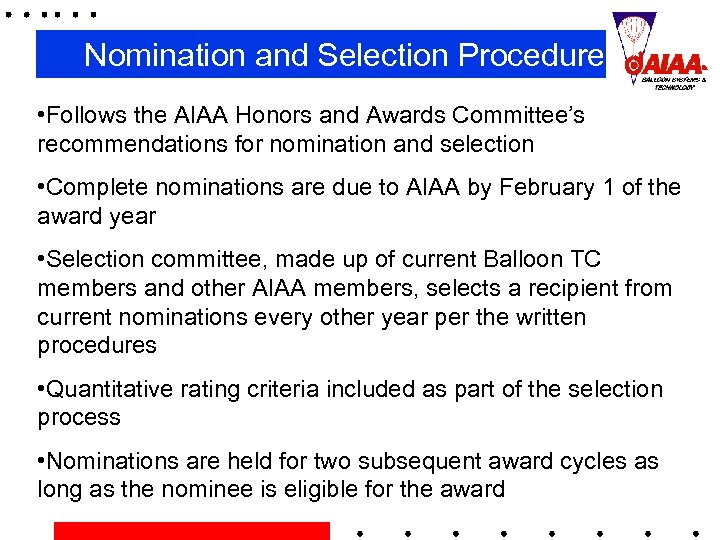 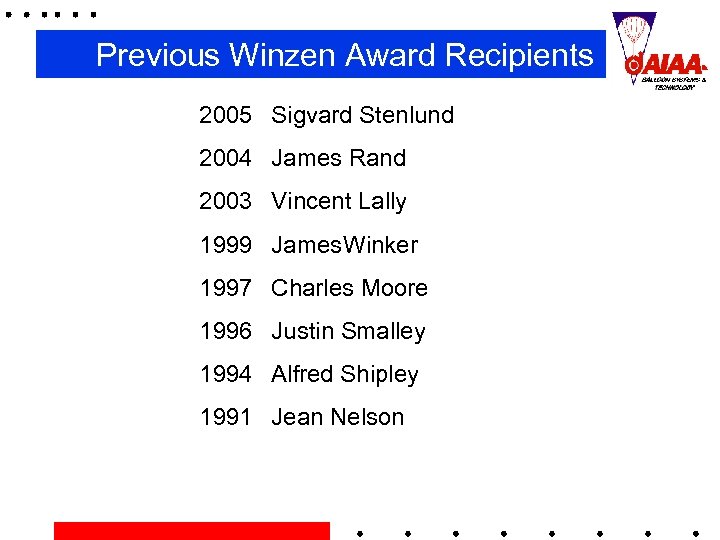 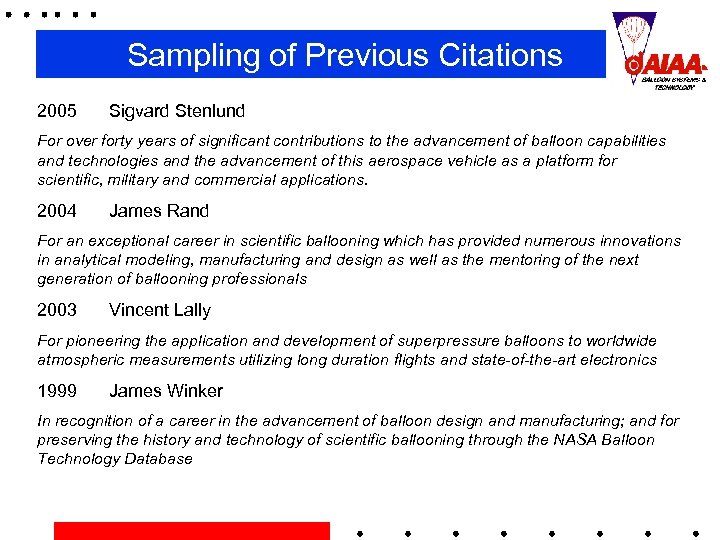 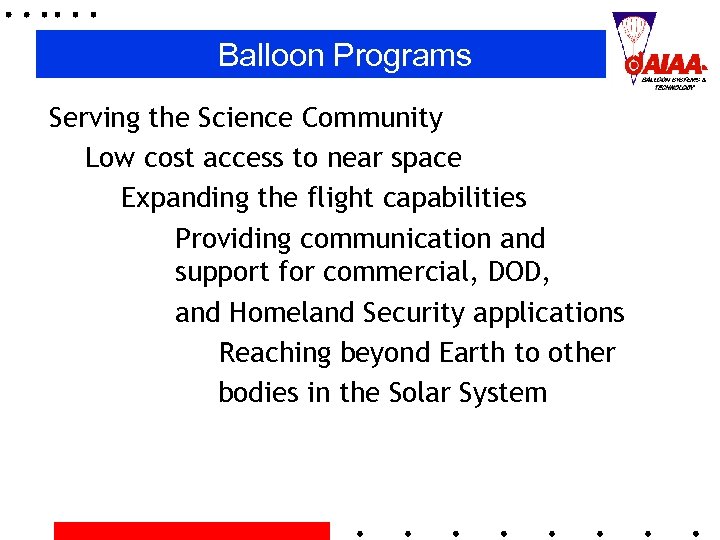 AIAA and the Otto C. Winzen Award • This award is in memory of Otto C. Winzen, a pioneer of modern day ballooning • Approved by the AIAA Board of Directors in 1993 • The award is presented for outstanding contributions and achievements in the advancement of free flight balloon systems or related technologies • The AIAA Balloon Systems Technical Committee (TC) is the responsible custodian within the AIAA organization to facilitate the reviews and selection recommendation for this award There is no higher award or honor in the advancement of ballooning than the Otto C. Winzen Award • The award selection process has been rewritten to be in line with the AIAA provided guidelines

What is Free Flight Ballooning? • Most people think of the Aeronautics and Astronautics in AIAA as aircraft and space systems – balloons “live” in both of these worlds • Balloons are the oldest form of flight • The first Historical Site recognized by the AIAA History TC was Annonay, France, where Joseph and Jacques Montgolfier flew the first balloon on June 4, 1783 • Modern free flight ballooning takes many different forms and serves many different needs • Largest balloons are the volume of a football stadium! Balloon at float altitude of ~39 km (130, 000 ft) with ~2, 700 kg payload

What Communities Are Served By This Award? • NASA Science Flights - Large observatories launched at a fraction of the cost of space missions • Cutting Edge Science - This years Nobel Prize in Physics was presented to John Mather and George Smoot who were the chief architects of NASA’s COBE (Cosmic Background Explorer) satellite, launched in 1989, which provided precise measurements of the microwave radiation coming from all directions of the universe. Much of the research leading to the development and success of COBE was done aboard highaltitude scientific balloons. 2001 “Science News” Metrics – 9% of the NASA Space Science Discoveries and Technical Achievements were from “Balloon Programs”

What Communities Are Served By This Award? • Balloons are being used for wireless data communications in geographic regions that are not served or are poorly served by existing wireless technologies and services • There active programs for using balloons to provide near space communications systems for DOD and Homeland Security efforts • Planetary Ballooning – Design and testing efforts are ongoing for placing balloons on other bodies in our solar system (Mars, Venus, Titan, and more!) • Planetary entry system testing • Other system test flights

Award Considerations • The award is presented biennially (odd years) to individuals who have had extended involvement and who have contributed significantly to the advancement of balloon capabilities and technologies and the advancement of this aerospace vehicle as a platform for scientific, military, and commercial applications. Such advancements shall include, but are not necessarily limited to: • Flight capabilities such as altitude, payload weight, durations, or reliability • Technical understanding of balloon performance, structures, or materials • Balloon operational technologies such as ground and flight systems • The recipient of the award is presented with a bronze medal, certificate, and rosette pin • This award is traditionally presented at the AIAA Balloon Technology Conference.

Award Eligibility • Any living person may be nominated for the award if the nominator believes the nominee has made significant contributions to balloon technology • The recipient will be selected based on the importance and significance of their achievement(s) or contribution(s) in relation to the overall advancement of ballooning • The nominee's length of service and skills in implementation and communication in the furtherance of ballooning will also be considered • The nominee may not be a current Balloon Systems Technical Committee member, and must not have been a member of the Balloon Systems Technical Committee for the past two years.

Nomination and Selection Procedure • Follows the AIAA Honors and Awards Committee’s recommendations for nomination and selection • Complete nominations are due to AIAA by February 1 of the award year • Selection committee, made up of current Balloon TC members and other AIAA members, selects a recipient from current nominations every other year per the written procedures • Quantitative rating criteria included as part of the selection process • Nominations are held for two subsequent award cycles as long as the nominee is eligible for the award

Sampling of Previous Citations 2005 Sigvard Stenlund For over forty years of significant contributions to the advancement of balloon capabilities and technologies and the advancement of this aerospace vehicle as a platform for scientific, military and commercial applications. 2004 James Rand For an exceptional career in scientific ballooning which has provided numerous innovations in analytical modeling, manufacturing and design as well as the mentoring of the next generation of ballooning professionals 2003 Vincent Lally For pioneering the application and development of superpressure balloons to worldwide atmospheric measurements utilizing long duration flights and state-of-the-art electronics 1999 James Winker In recognition of a career in the advancement of balloon design and manufacturing; and for preserving the history and technology of scientific ballooning through the NASA Balloon Technology Database

Balloon Programs Serving the Science Community Low cost access to near space Expanding the flight capabilities Providing communication and support for commercial, DOD, and Homeland Security applications Reaching beyond Earth to other bodies in the Solar System

Descriptive grammar Definition: It is a

Proactive vs. Reactive • Latency of route