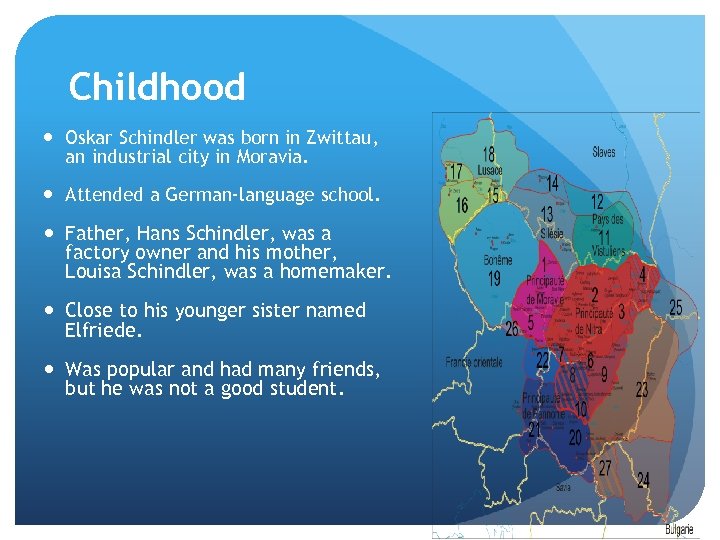 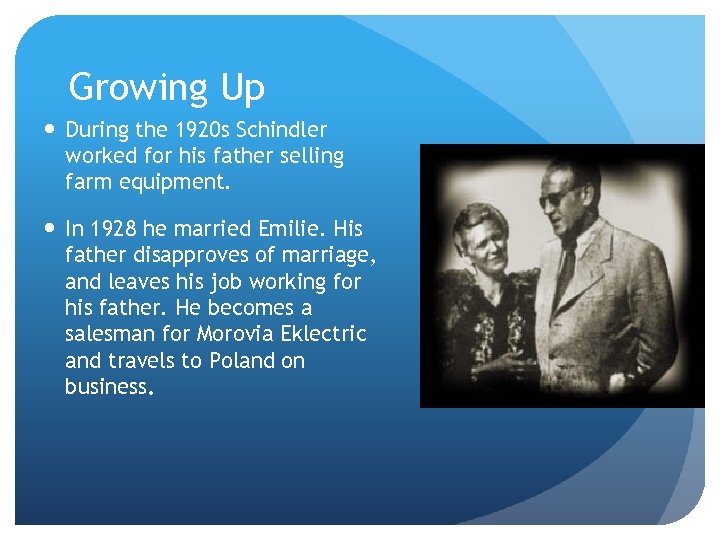 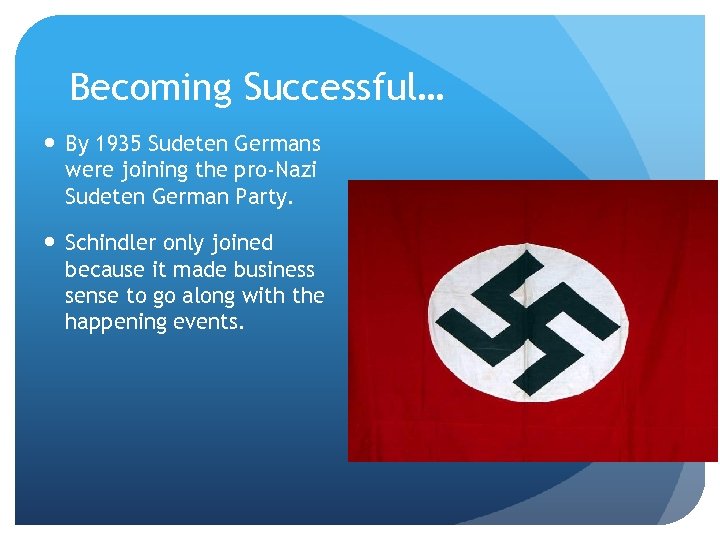 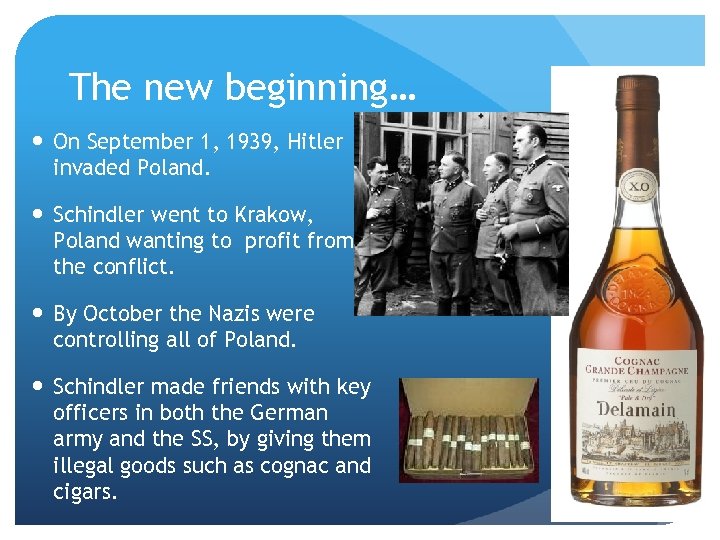 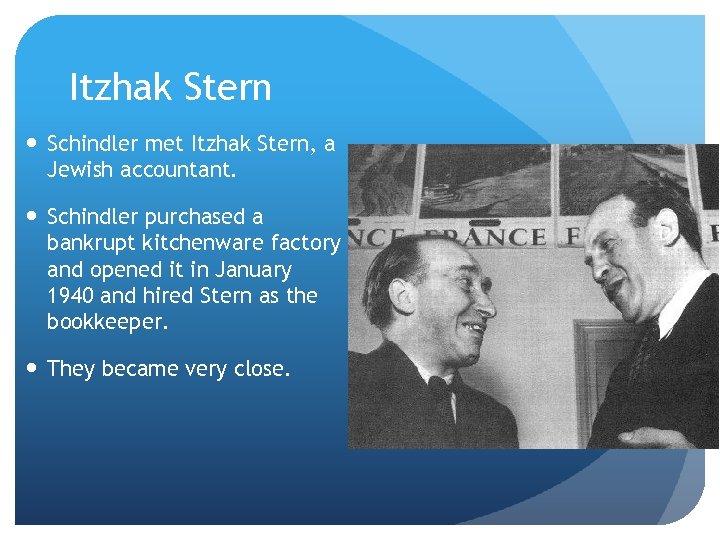 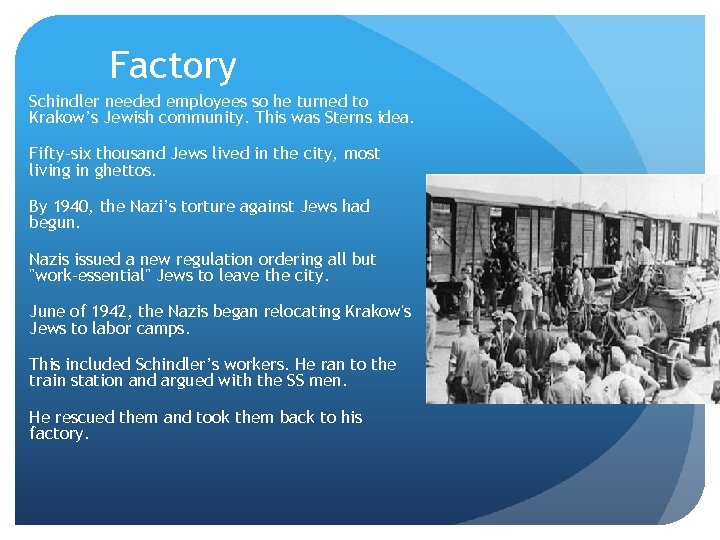 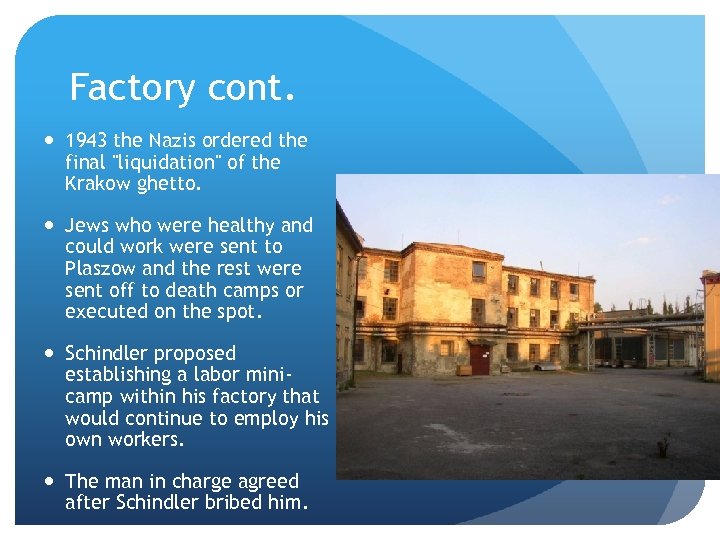 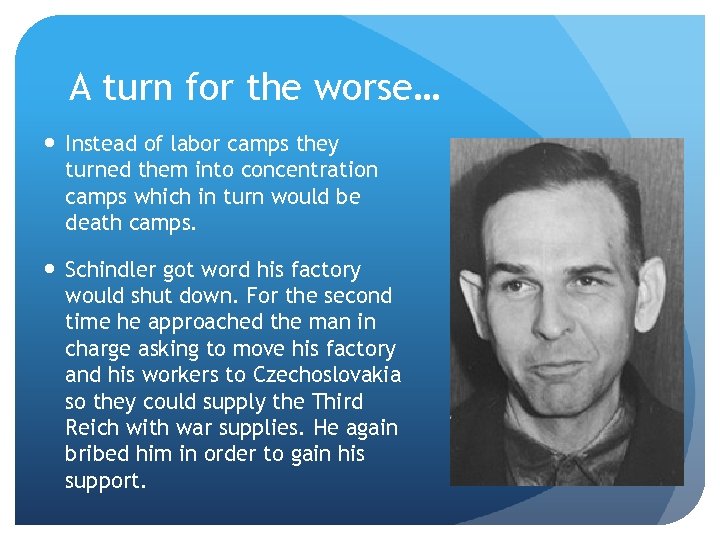 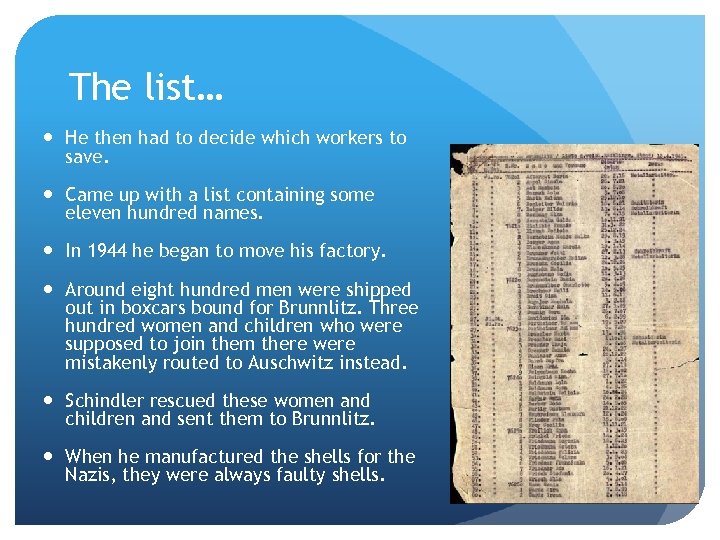 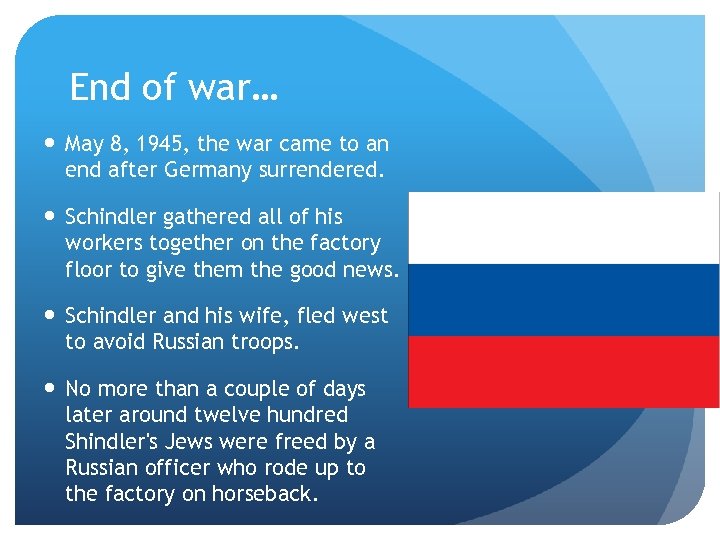 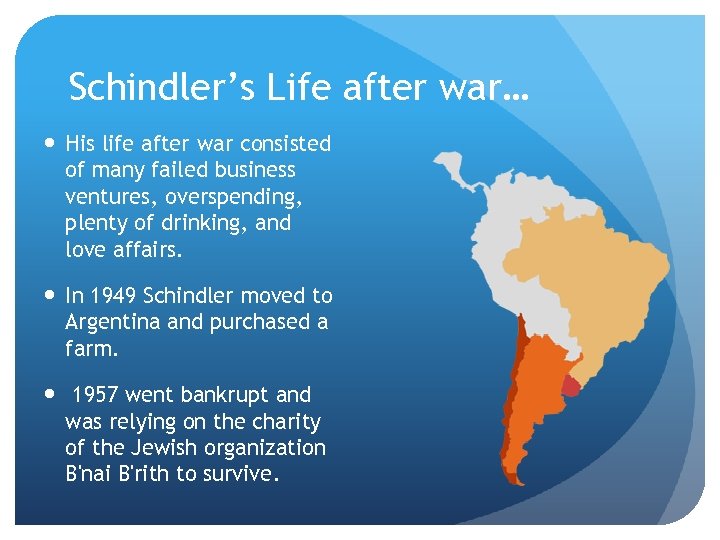 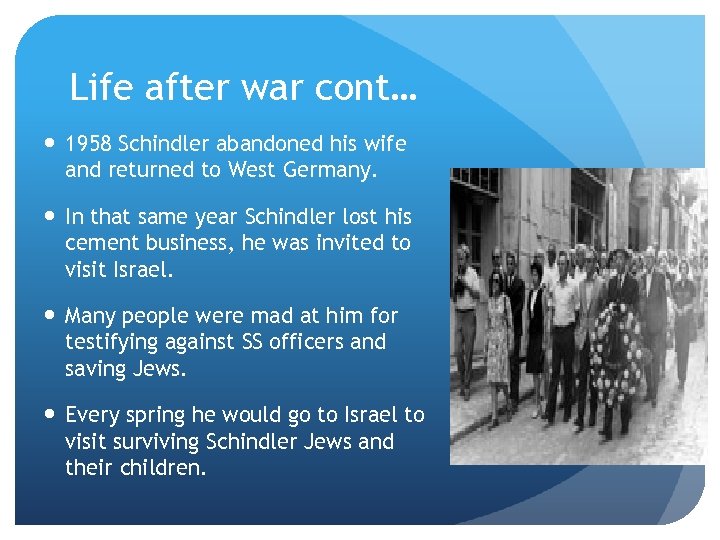 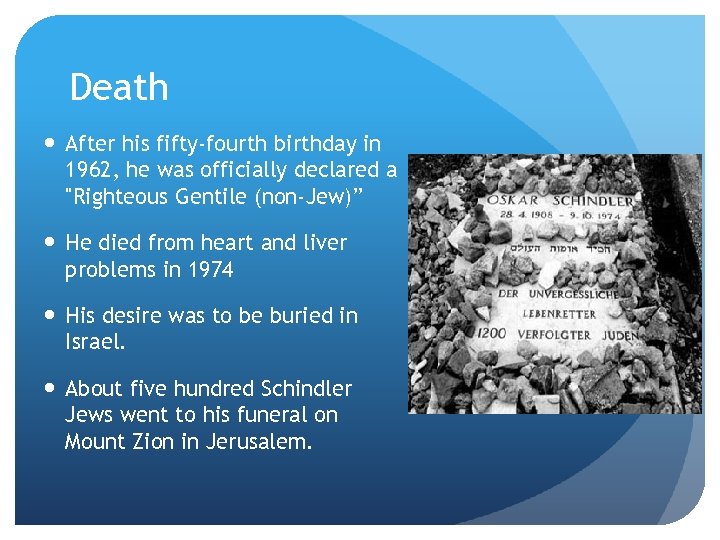 Childhood Oskar Schindler was born in Zwittau, an industrial city in Moravia. Attended a German-language school. Father, Hans Schindler, was a factory owner and his mother, Louisa Schindler, was a homemaker. Close to his younger sister named Elfriede. Was popular and had many friends, but he was not a good student.

Growing Up During the 1920 s Schindler worked for his father selling farm equipment. In 1928 he married Emilie. His father disapproves of marriage, and leaves his job working for his father. He becomes a salesman for Morovia Eklectric and travels to Poland on business.

Becoming Successful… By 1935 Sudeten Germans were joining the pro-Nazi Sudeten German Party. Schindler only joined because it made business sense to go along with the happening events.

The new beginning… On September 1, 1939, Hitler invaded Poland. Schindler went to Krakow, Poland wanting to profit from the conflict. By October the Nazis were controlling all of Poland. Schindler made friends with key officers in both the German army and the SS, by giving them illegal goods such as cognac and cigars.

Itzhak Stern Schindler met Itzhak Stern, a Jewish accountant. Schindler purchased a bankrupt kitchenware factory and opened it in January 1940 and hired Stern as the bookkeeper. They became very close.

Factory Schindler needed employees so he turned to Krakow’s Jewish community. This was Sterns idea. Fifty-six thousand Jews lived in the city, most living in ghettos. By 1940, the Nazi’s torture against Jews had begun. Nazis issued a new regulation ordering all but "work-essential" Jews to leave the city. June of 1942, the Nazis began relocating Krakow's Jews to labor camps. This included Schindler’s workers. He ran to the train station and argued with the SS men. He rescued them and took them back to his factory.

Factory cont. 1943 the Nazis ordered the final "liquidation" of the Krakow ghetto. Jews who were healthy and could work were sent to Plaszow and the rest were sent off to death camps or executed on the spot. Schindler proposed establishing a labor minicamp within his factory that would continue to employ his own workers. The man in charge agreed after Schindler bribed him.

A turn for the worse… Instead of labor camps they turned them into concentration camps which in turn would be death camps. Schindler got word his factory would shut down. For the second time he approached the man in charge asking to move his factory and his workers to Czechoslovakia so they could supply the Third Reich with war supplies. He again bribed him in order to gain his support.

The list… He then had to decide which workers to save. Came up with a list containing some eleven hundred names. In 1944 he began to move his factory. Around eight hundred men were shipped out in boxcars bound for Brunnlitz. Three hundred women and children who were supposed to join them there were mistakenly routed to Auschwitz instead. Schindler rescued these women and children and sent them to Brunnlitz. When he manufactured the shells for the Nazis, they were always faulty shells.

End of war… May 8, 1945, the war came to an end after Germany surrendered. Schindler gathered all of his workers together on the factory floor to give them the good news. Schindler and his wife, fled west to avoid Russian troops. No more than a couple of days later around twelve hundred Shindler's Jews were freed by a Russian officer who rode up to the factory on horseback.

Schindler’s Life after war… His life after war consisted of many failed business ventures, overspending, plenty of drinking, and love affairs. In 1949 Schindler moved to Argentina and purchased a farm. 1957 went bankrupt and was relying on the charity of the Jewish organization B'nai B'rith to survive.

Life after war cont… 1958 Schindler abandoned his wife and returned to West Germany. In that same year Schindler lost his cement business, he was invited to visit Israel. Many people were mad at him for testifying against SS officers and saving Jews. Every spring he would go to Israel to visit surviving Schindler Jews and their children.

Death After his fifty-fourth birthday in 1962, he was officially declared a "Righteous Gentile (non-Jew)” He died from heart and liver problems in 1974 His desire was to be buried in Israel. About five hundred Schindler Jews went to his funeral on Mount Zion in Jerusalem.