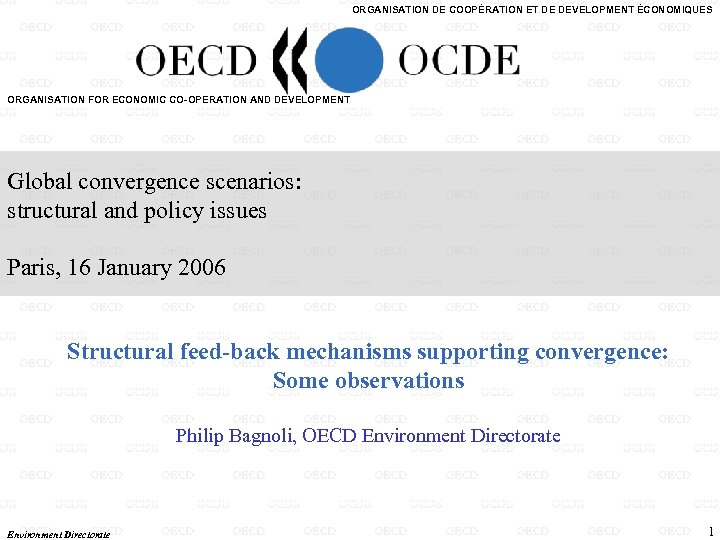 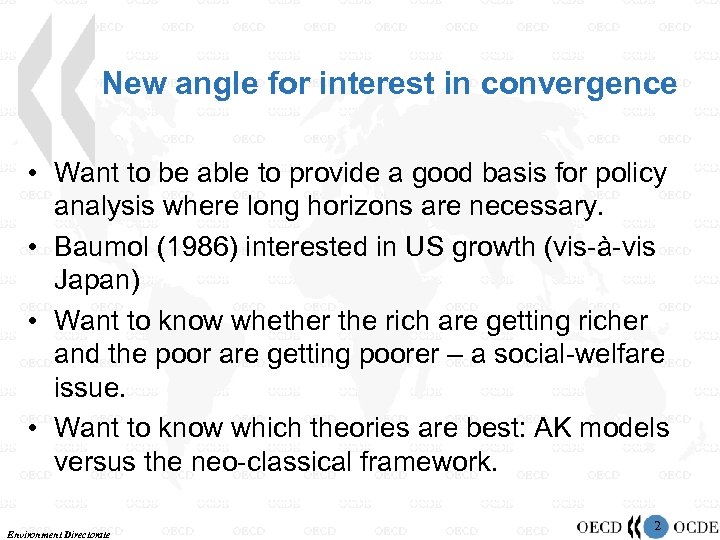 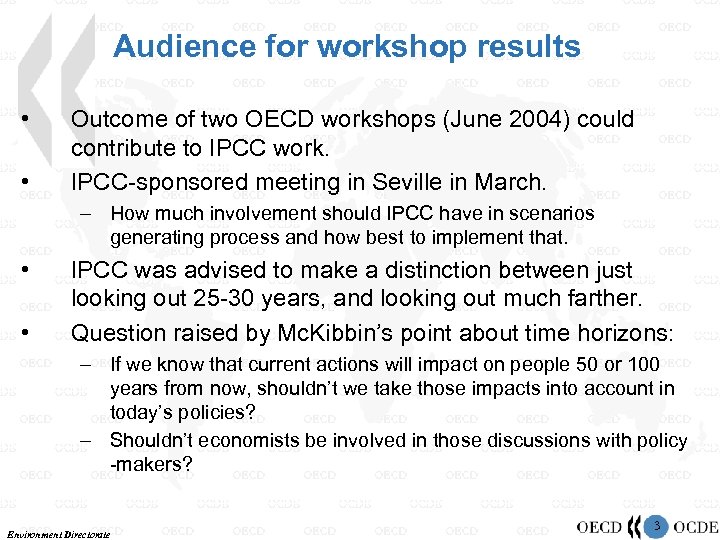 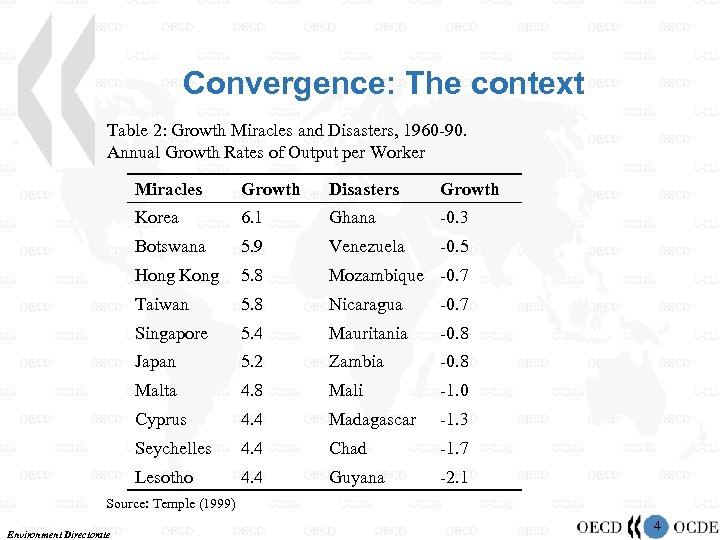 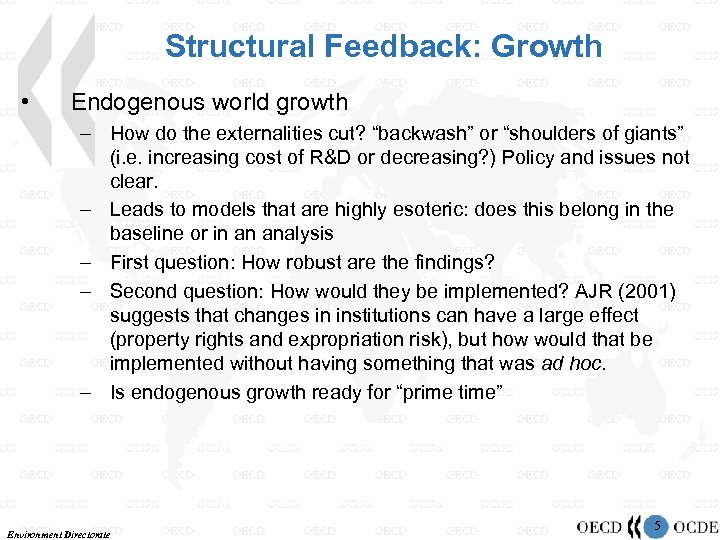 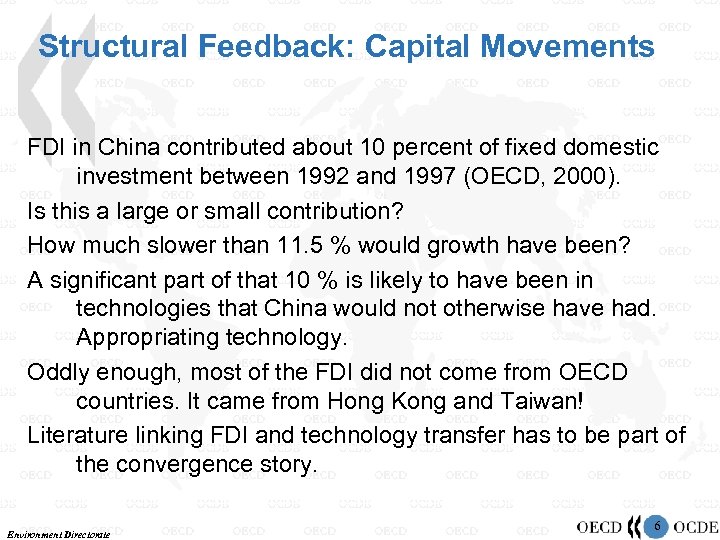 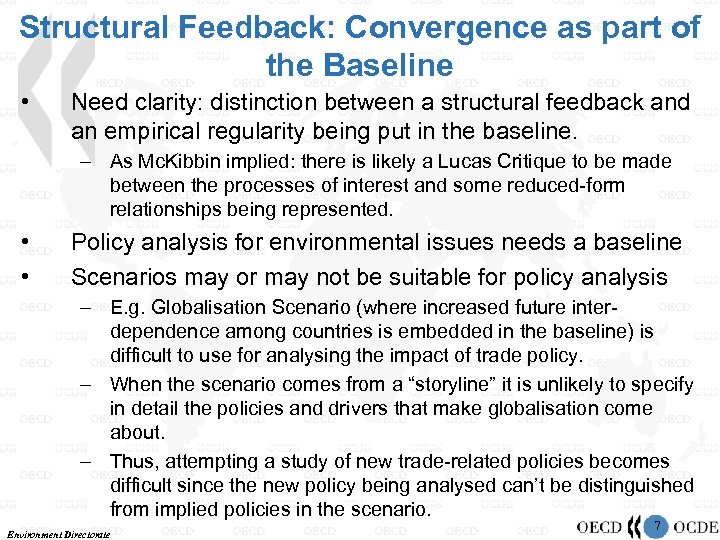 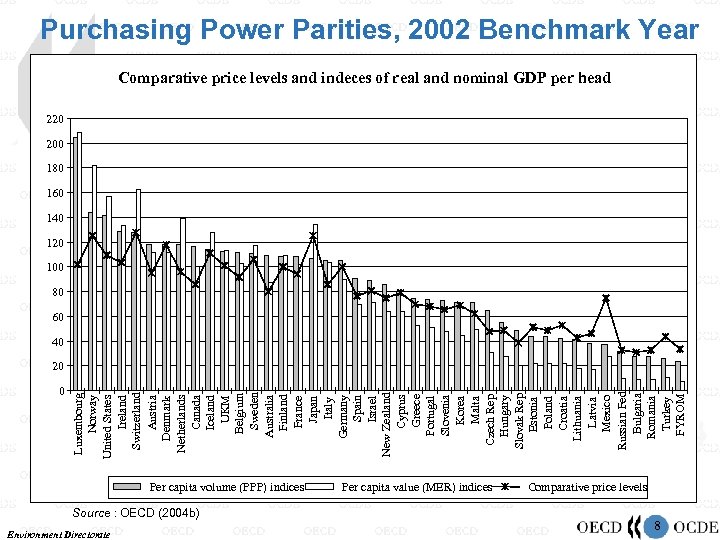 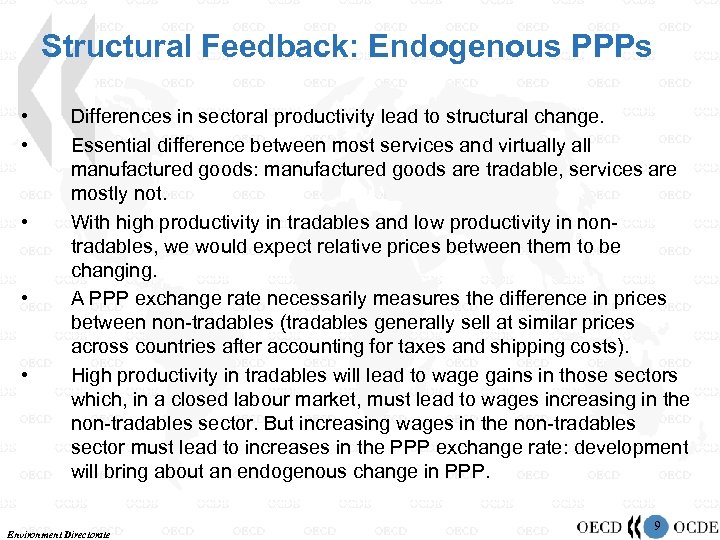 New angle for interest in convergence • Want to be able to provide a good basis for policy analysis where long horizons are necessary. • Baumol (1986) interested in US growth (vis-à-vis Japan) • Want to know whether the rich are getting richer and the poor are getting poorer – a social-welfare issue. • Want to know which theories are best: AK models versus the neo-classical framework. Environment Directorate 2

Audience for workshop results • • Outcome of two OECD workshops (June 2004) could contribute to IPCC work. IPCC-sponsored meeting in Seville in March. – How much involvement should IPCC have in scenarios generating process and how best to implement that. • • IPCC was advised to make a distinction between just looking out 25 -30 years, and looking out much farther. Question raised by Mc. Kibbin’s point about time horizons: – If we know that current actions will impact on people 50 or 100 years from now, shouldn’t we take those impacts into account in today’s policies? – Shouldn’t economists be involved in those discussions with policy -makers? Environment Directorate 3

Structural Feedback: Growth • Endogenous world growth – How do the externalities cut? “backwash” or “shoulders of giants” (i. e. increasing cost of R&D or decreasing? ) Policy and issues not clear. – Leads to models that are highly esoteric: does this belong in the baseline or in an analysis – First question: How robust are the findings? – Second question: How would they be implemented? AJR (2001) suggests that changes in institutions can have a large effect (property rights and expropriation risk), but how would that be implemented without having something that was ad hoc. – Is endogenous growth ready for “prime time” Environment Directorate 5

Structural Feedback: Capital Movements FDI in China contributed about 10 percent of fixed domestic investment between 1992 and 1997 (OECD, 2000). Is this a large or small contribution? How much slower than 11. 5 % would growth have been? A significant part of that 10 % is likely to have been in technologies that China would not otherwise have had. Appropriating technology. Oddly enough, most of the FDI did not come from OECD countries. It came from Hong Kong and Taiwan! Literature linking FDI and technology transfer has to be part of the convergence story. Environment Directorate 6

Structural Feedback: Convergence as part of the Baseline • Need clarity: distinction between a structural feedback and an empirical regularity being put in the baseline. – As Mc. Kibbin implied: there is likely a Lucas Critique to be made between the processes of interest and some reduced-form relationships being represented. • • Policy analysis for environmental issues needs a baseline Scenarios may or may not be suitable for policy analysis – E. g. Globalisation Scenario (where increased future interdependence among countries is embedded in the baseline) is difficult to use for analysing the impact of trade policy. – When the scenario comes from a “storyline” it is unlikely to specify in detail the policies and drivers that make globalisation come about. – Thus, attempting a study of new trade-related policies becomes difficult since the new policy being analysed can’t be distinguished from implied policies in the scenario. Environment Directorate 7

Structural Feedback: Endogenous PPPs • • • Differences in sectoral productivity lead to structural change. Essential difference between most services and virtually all manufactured goods: manufactured goods are tradable, services are mostly not. With high productivity in tradables and low productivity in nontradables, we would expect relative prices between them to be changing. A PPP exchange rate necessarily measures the difference in prices between non-tradables (tradables generally sell at similar prices across countries after accounting for taxes and shipping costs). High productivity in tradables will lead to wage gains in those sectors which, in a closed labour market, must lead to wages increasing in the non-tradables sector. But increasing wages in the non-tradables sector must lead to increases in the PPP exchange rate: development will bring about an endogenous change in PPP. Environment Directorate 9