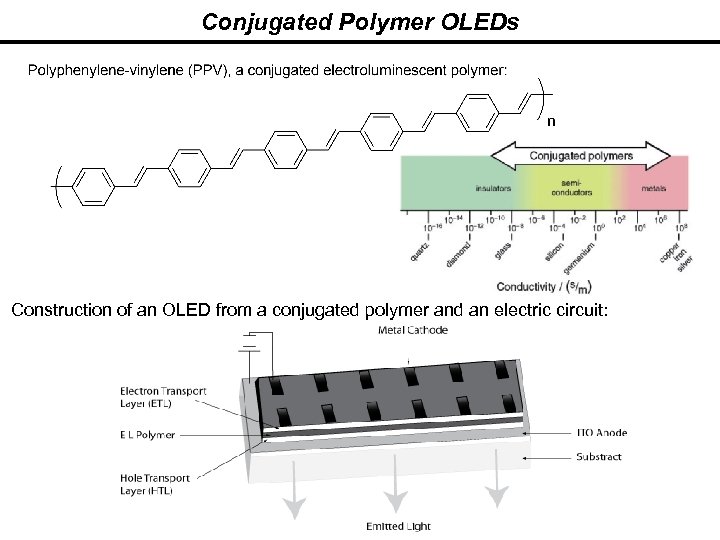 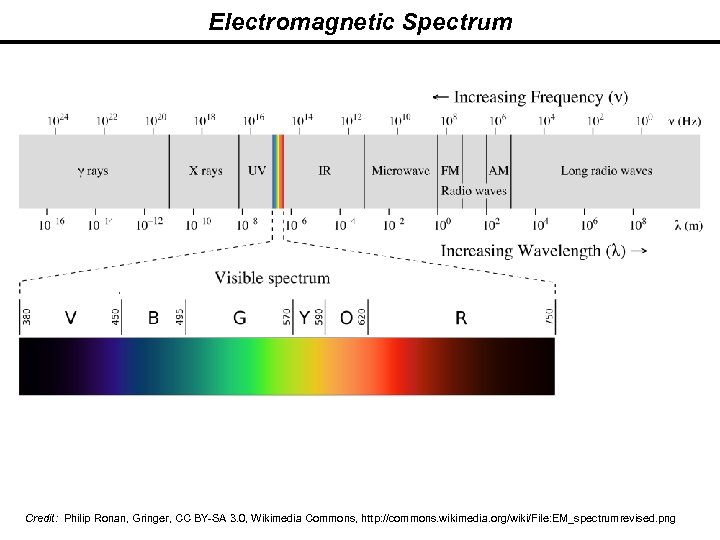 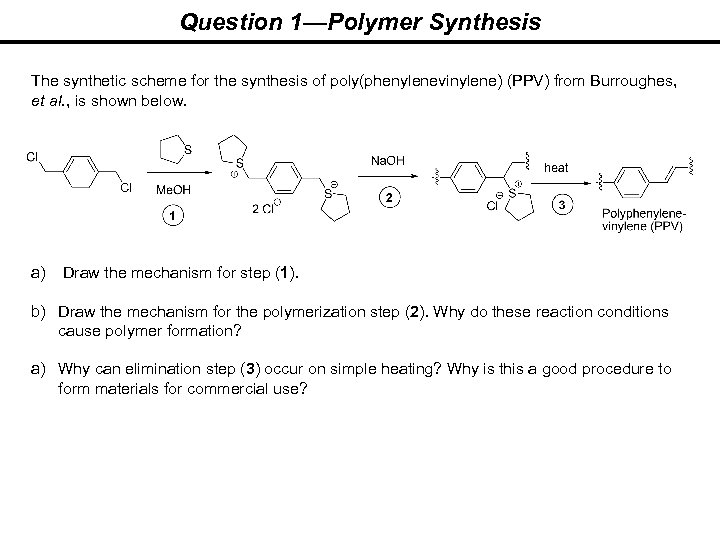 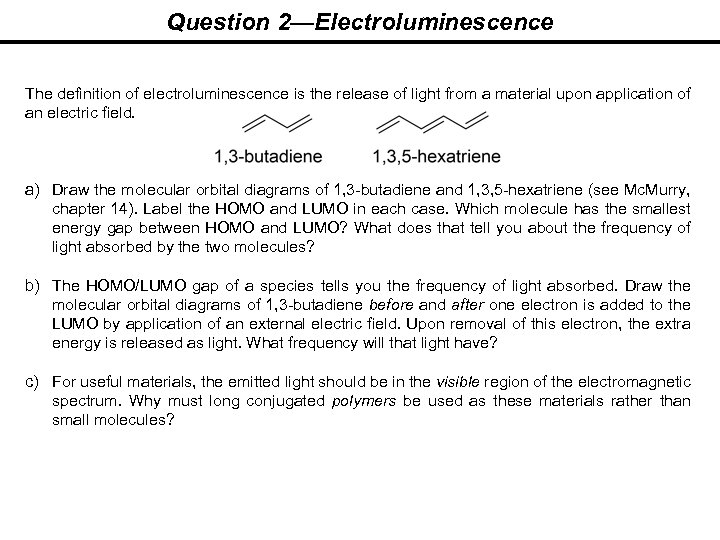 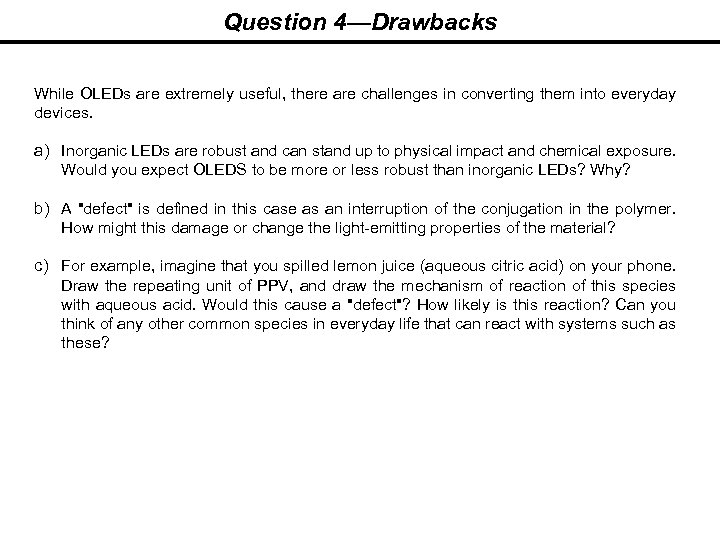 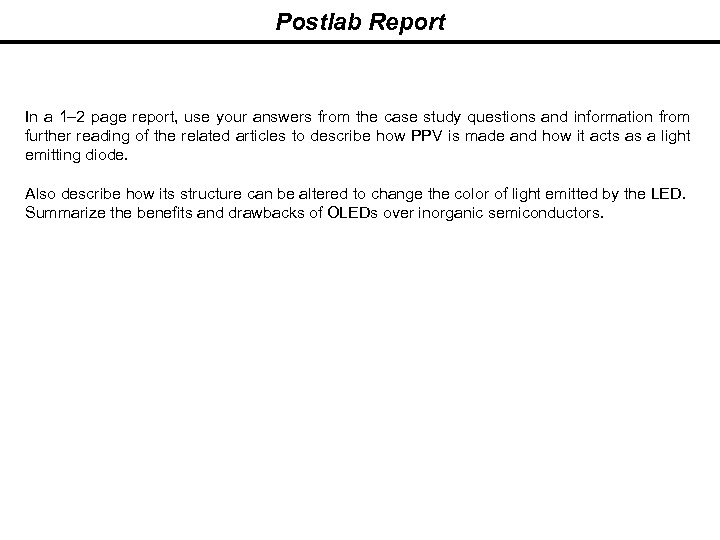 Introduction Derek and Alex were shopping for TVs in Best Buy, when they came across a new Samsung 55˝ OLED TV. Alex was excited, as he’d heard excellent things about OLED displays, until he saw the price—$9000! When Alex displayed amazement, Derek was skeptical. “You don’t want that—it’s far too expensive, and they always break. ” “Isn’t my cellphone made of an OLED display? Why can’t it be applied to TVs? ” Derek, having a broader knowledge of chemistry than Alex, tried to explain why OLEDs are expensive and fragile. “Normal light-emitting diodes are much more robust—you spill anything on an OLED display and it’s ruined. ” Alex, on the other hand, was mesmerized by the pretty colors and decided he wanted to learn more about OLEDs, and started reading. He found a Nature paper on conducting polymers by Burroughes, et al. , and started from there. Background In this case, you will determine how to synthesize a conducting polymer from basic organic chemicals, how to vary its structure to alter the color of emitted light (essential for the creation of color displays), and determine how and why it functions.

Conjugated Polymer OLEDs Construction of an OLED from a conjugated polymer and an electric circuit:

Issues and Topics Issues in the case: A) How do OLEDs work? What are they made of, and why do they emit light? B) How can you make OLEDs that emit light in different colors (red, green, blue)? C) What are the advantages and disadvantages of OLEDs vs inorganic LEDs and LCDs? Learning topics: Polymer synthesis + mechanism (SN 2). Molecular orbital theory, conjugation and resonance. Synthesis of benzene derivatives, and aromaticity.

Question 1—Polymer Synthesis The synthetic scheme for the synthesis of poly(phenylenevinylene) (PPV) from Burroughes, et al. , is shown below. a) Draw the mechanism for step (1). b) Draw the mechanism for the polymerization step (2). Why do these reaction conditions cause polymer formation? a) Why can elimination step (3) occur on simple heating? Why is this a good procedure to form materials for commercial use?

Question 2—Electroluminescence The definition of electroluminescence is the release of light from a material upon application of an electric field. a) Draw the molecular orbital diagrams of 1, 3 -butadiene and 1, 3, 5 -hexatriene (see Mc. Murry, chapter 14). Label the HOMO and LUMO in each case. Which molecule has the smallest energy gap between HOMO and LUMO? What does that tell you about the frequency of light absorbed by the two molecules? b) The HOMO/LUMO gap of a species tells you the frequency of light absorbed. Draw the molecular orbital diagrams of 1, 3 -butadiene before and after one electron is added to the LUMO by application of an external electric field. Upon removal of this electron, the extra energy is released as light. What frequency will that light have? c) For useful materials, the emitted light should be in the visible region of the electromagnetic spectrum. Why must long conjugated polymers be used as these materials rather than small molecules?

Question 3—Color Variance A desirable feature of OLEDs is the ability to closely tune the emission frequency to release light of different colors. This can be achieved by varying the substituents on the PPV polymer. a) Two common PPV variants are called Bu. EH-PPV and BEH-PPV, and their structures are shown to the right. If PPV itself (and Bu. EH-PPV) emits light in the green/yellow-green region, whereas BEH-PPV emits red light, what does that tell you about their respective HOMO-LUMO gaps? b) Based on that information, what type of substituents would you add to the PPV aromatic rings to favor the emission of blue light? c) You can synthesize the PPV precursor below in one step from p-xylene. How? d) If you wanted to create a PPV precursor with two electron-withdrawing groups in two steps from p-xylene, how would you do it? Which electron-withdrawing groups would you choose, and why?

Question 4—Drawbacks While OLEDs are extremely useful, there are challenges in converting them into everyday devices. a) Inorganic LEDs are robust and can stand up to physical impact and chemical exposure. Would you expect OLEDS to be more or less robust than inorganic LEDs? Why? b) A "defect" is defined in this case as an interruption of the conjugation in the polymer. How might this damage or change the light-emitting properties of the material? c) For example, imagine that you spilled lemon juice (aqueous citric acid) on your phone. Draw the repeating unit of PPV, and draw the mechanism of reaction of this species with aqueous acid. Would this cause a "defect"? How likely is this reaction? Can you think of any other common species in everyday life that can react with systems such as these?

Postlab Report In a 1– 2 page report, use your answers from the case study questions and information from further reading of the related articles to describe how PPV is made and how it acts as a light emitting diode. Also describe how its structure can be altered to change the color of light emitted by the LED. Summarize the benefits and drawbacks of OLEDs over inorganic semiconductors.