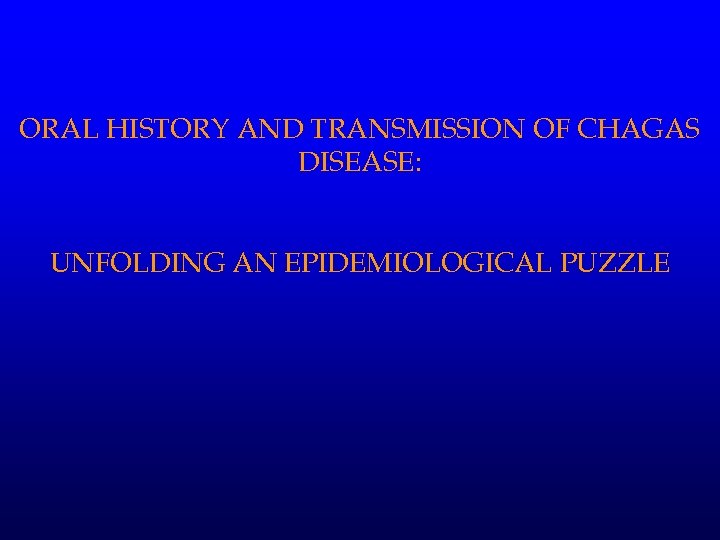 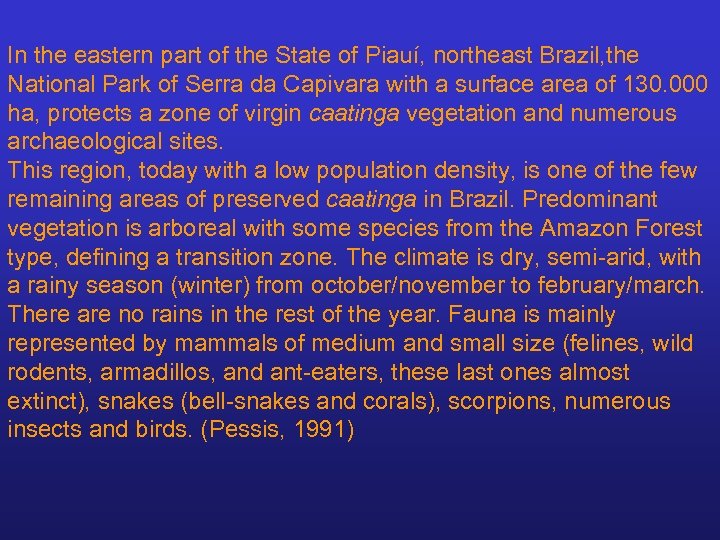 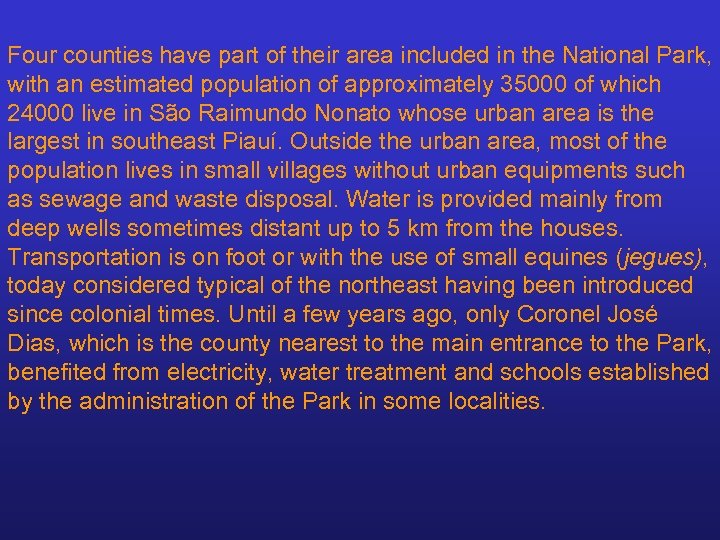 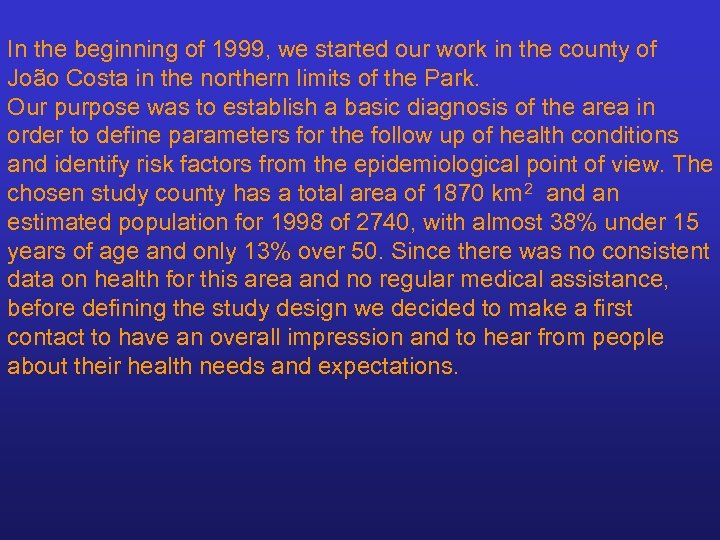 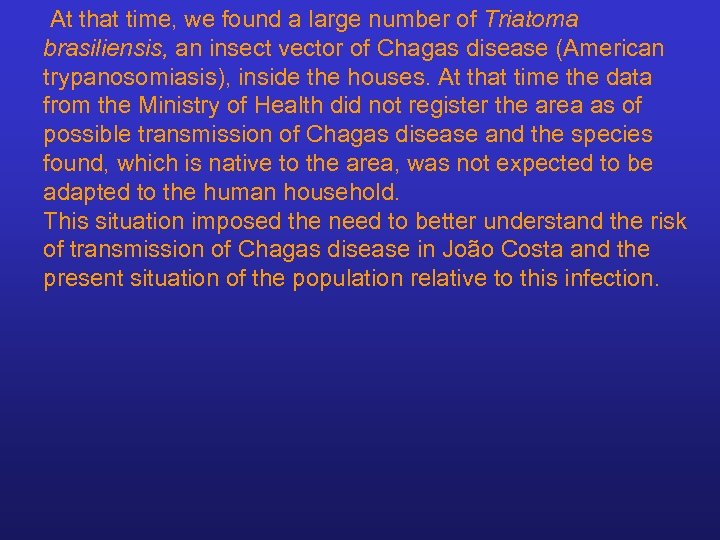 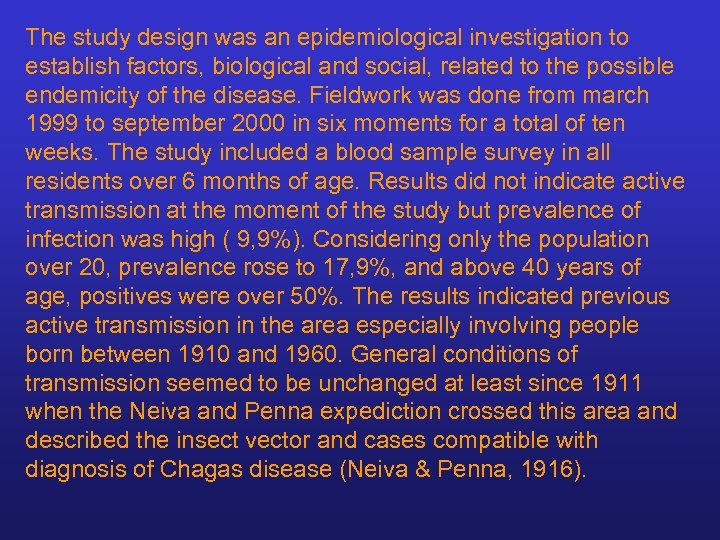 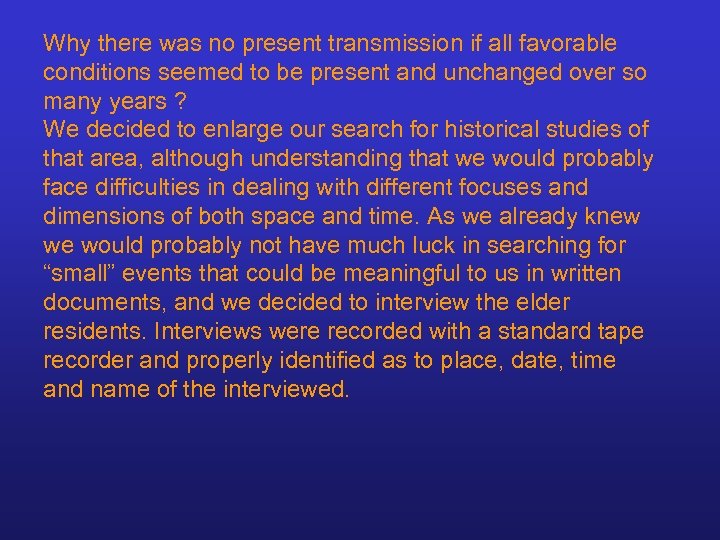 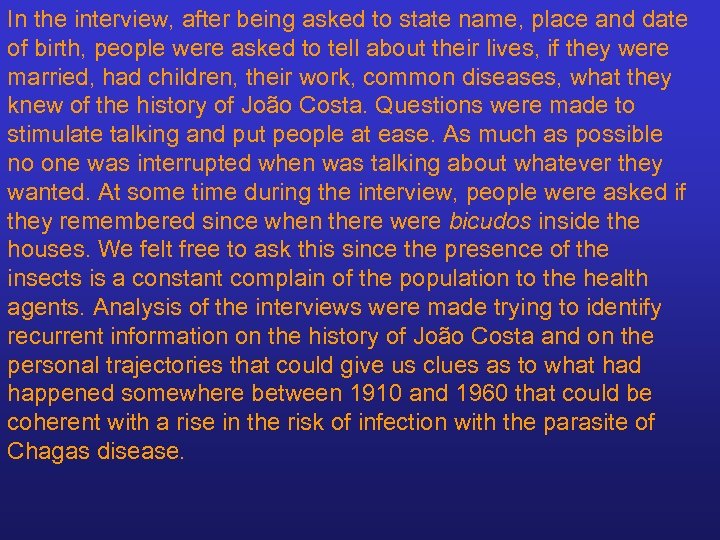 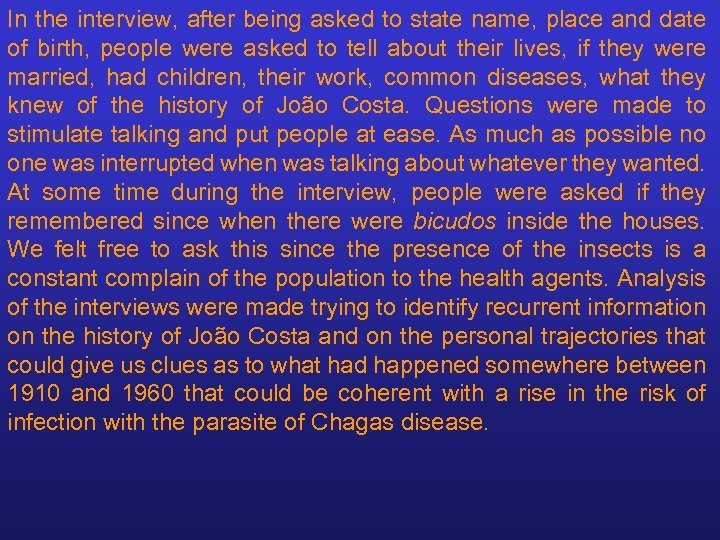 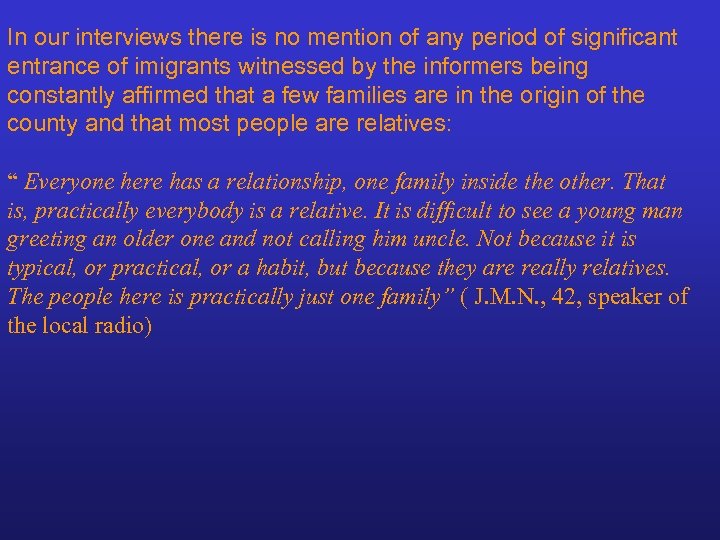 In the eastern part of the State of Piauí, northeast Brazil, the National Park of Serra da Capivara with a surface area of 130. 000 ha, protects a zone of virgin caatinga vegetation and numerous archaeological sites. This region, today with a low population density, is one of the few remaining areas of preserved caatinga in Brazil. Predominant vegetation is arboreal with some species from the Amazon Forest type, defining a transition zone. The climate is dry, semi-arid, with a rainy season (winter) from october/november to february/march. There are no rains in the rest of the year. Fauna is mainly represented by mammals of medium and small size (felines, wild rodents, armadillos, and ant-eaters, these last ones almost extinct), snakes (bell-snakes and corals), scorpions, numerous insects and birds. (Pessis, 1991)

Four counties have part of their area included in the National Park, with an estimated population of approximately 35000 of which 24000 live in São Raimundo Nonato whose urban area is the largest in southeast Piauí. Outside the urban area, most of the population lives in small villages without urban equipments such as sewage and waste disposal. Water is provided mainly from deep wells sometimes distant up to 5 km from the houses. Transportation is on foot or with the use of small equines (jegues), today considered typical of the northeast having been introduced since colonial times. Until a few years ago, only Coronel José Dias, which is the county nearest to the main entrance to the Park, benefited from electricity, water treatment and schools established by the administration of the Park in some localities.

In the beginning of 1999, we started our work in the county of João Costa in the northern limits of the Park. Our purpose was to establish a basic diagnosis of the area in order to define parameters for the follow up of health conditions and identify risk factors from the epidemiological point of view. The chosen study county has a total area of 1870 km 2 and an estimated population for 1998 of 2740, with almost 38% under 15 years of age and only 13% over 50. Since there was no consistent data on health for this area and no regular medical assistance, before defining the study design we decided to make a first contact to have an overall impression and to hear from people about their health needs and expectations.

At that time, we found a large number of Triatoma brasiliensis, an insect vector of Chagas disease (American trypanosomiasis), inside the houses. At that time the data from the Ministry of Health did not register the area as of possible transmission of Chagas disease and the species found, which is native to the area, was not expected to be adapted to the human household. This situation imposed the need to better understand the risk of transmission of Chagas disease in João Costa and the present situation of the population relative to this infection.

The study design was an epidemiological investigation to establish factors, biological and social, related to the possible endemicity of the disease. Fieldwork was done from march 1999 to september 2000 in six moments for a total of ten weeks. The study included a blood sample survey in all residents over 6 months of age. Results did not indicate active transmission at the moment of the study but prevalence of infection was high ( 9, 9%). Considering only the population over 20, prevalence rose to 17, 9%, and above 40 years of age, positives were over 50%. The results indicated previous active transmission in the area especially involving people born between 1910 and 1960. General conditions of transmission seemed to be unchanged at least since 1911 when the Neiva and Penna expediction crossed this area and described the insect vector and cases compatible with diagnosis of Chagas disease (Neiva & Penna, 1916).

Why there was no present transmission if all favorable conditions seemed to be present and unchanged over so many years ? We decided to enlarge our search for historical studies of that area, although understanding that we would probably face difficulties in dealing with different focuses and dimensions of both space and time. As we already knew we would probably not have much luck in searching for “small” events that could be meaningful to us in written documents, and we decided to interview the elder residents. Interviews were recorded with a standard tape recorder and properly identified as to place, date, time and name of the interviewed.

In the interview, after being asked to state name, place and date of birth, people were asked to tell about their lives, if they were married, had children, their work, common diseases, what they knew of the history of João Costa. Questions were made to stimulate talking and put people at ease. As much as possible no one was interrupted when was talking about whatever they wanted. At some time during the interview, people were asked if they remembered since when there were bicudos inside the houses. We felt free to ask this since the presence of the insects is a constant complain of the population to the health agents. Analysis of the interviews were made trying to identify recurrent information on the history of João Costa and on the personal trajectories that could give us clues as to what had happened somewhere between 1910 and 1960 that could be coherent with a rise in the risk of infection with the parasite of Chagas disease.

In the interview, after being asked to state name, place and date of birth, people were asked to tell about their lives, if they were married, had children, their work, common diseases, what they knew of the history of João Costa. Questions were made to stimulate talking and put people at ease. As much as possible no one was interrupted when was talking about whatever they wanted. At some time during the interview, people were asked if they remembered since when there were bicudos inside the houses. We felt free to ask this since the presence of the insects is a constant complain of the population to the health agents. Analysis of the interviews were made trying to identify recurrent information on the history of João Costa and on the personal trajectories that could give us clues as to what had happened somewhere between 1910 and 1960 that could be coherent with a rise in the risk of infection with the parasite of Chagas disease.

In the search for historical and anthropological works referred to the study area we identified the works of Mott, 1977 and 1978, on the history of occupation of southeast Piauí from the XVII to the XX century and most important to us, those of Queiroz, 1994 and Godoi, 1999. Queiroz describes the economic relevance of the rubber produced from maniçoba (Manihot piauhyensis) in this region from the beginning of the XX century up to the 1920 s. This had also been mentioned by Neiva & Penna in 1912 who said that there “pratically there are no roads and the only one that deserves this name was built recently between São Raimundo and Remanso (in Bahia) by the company that exploits the large maniçoba plantation there”. (Neiva & Penna, 1916, p. 171) .

Godoi, 1999, through oral history, identifies the origins of a settlement near São Raimundo (in the southern area of the Park) linked to the boom of the maniçoba: “ They came with the influence of maniçoba, for the word spread that much money was rolling here; the coming of many people from Pernambuco was with the maniçoba, around 1910 to 1914 – before the maniçoba there was only the family of Vitorino” (Godoi, 1999, p. 55)

In our interviews there is no mention of any period of significant entrance of imigrants witnessed by the informers being constantly affirmed that a few families are in the origin of the county and that most people are relatives: “ Everyone here has a relationship, one family inside the other. That is, practically everybody is a relative. It is difficult to see a young man greeting an older one and not calling him uncle. Not because it is typical, or practical, or a habit, but because they are really relatives. The people here is practically just one family” ( J. M. N. , 42, speaker of the local radio)

But the extraction of the maniçoba latex is mentioned and the activity, contrary to what has happened in São Raimundo, seems to have involved only the exploitation of native plants. This was an important clue to an activity in the area that could have raised the risk of transmission since the extraction of the latex from native plants often involved entering the areas of rock shelters and staying there at night. In these areas, even today, there is active transmission of the infection that circulates in the insect vectors and a species of wild rodent (mocó), very common in the rocks up in the plateau. The interviews also point to a much longer permanence of the activity in João Costa, probably being present continuously from the 1910 s to the early 1960 s. Queiroz, 1994, points out that the extraction of maniçoba that had practically disappeared in the early 1920 s in most of Piauí, had a new rise during World War II

“ The people called xiringa, but the real name is maniçoba. Up in the rocks…. We took water to spend a week…. got some 20, 25 kg in two of us! We went to make the holes, …. drive the hole in the maniçoba, put the vase, the milk dripped inside…. With eight days we took it. Then, washed, very well washed in water, and then went to sell…. It took some four, five hours up to the plateau (the rocks)… We camped there, we ate armadillo, the dogs hunted. . Today nobody hunts anymore, the IBAMA does not permit…I made holes in the maniçoba up to the age of 25 and today I am on my 77 years and 6 months and 19 days, today…. Right here in João Costa nobody planted maniçoba…. I heard that perhaps, in the begginning some people planted. But that was not on my time… People took it from the middle of the bush, we slept there, in a shelter made of clay. Scorpions too, and the bicudo there were too many… Those that slept in the ground they would bite for sure. Many people here worked in the maniçoba, yes… The money we got was only from maniçoba. It was seven, eight months only in the maniçoba. We sold to Dorim…. . He lived in São João and put his buyer to buy and resell there, gaining money” (S. G. S. , 77 years old)