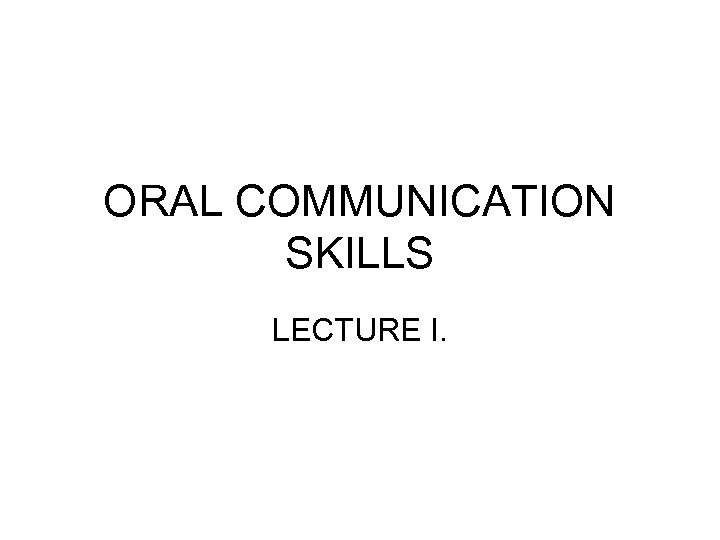 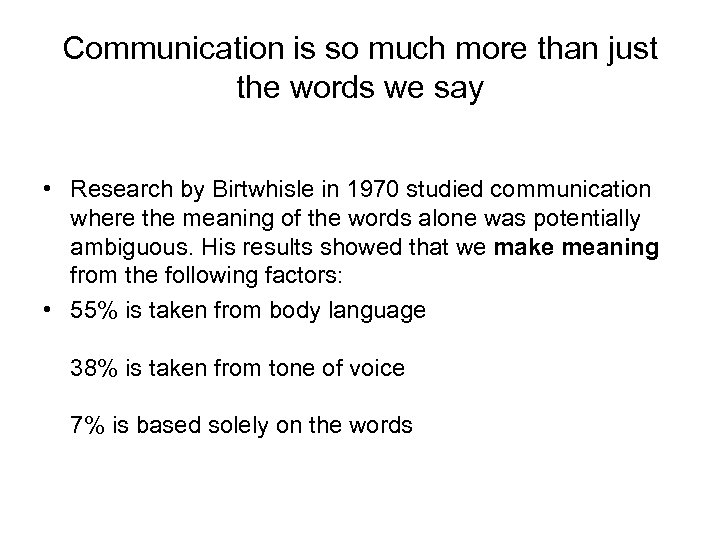 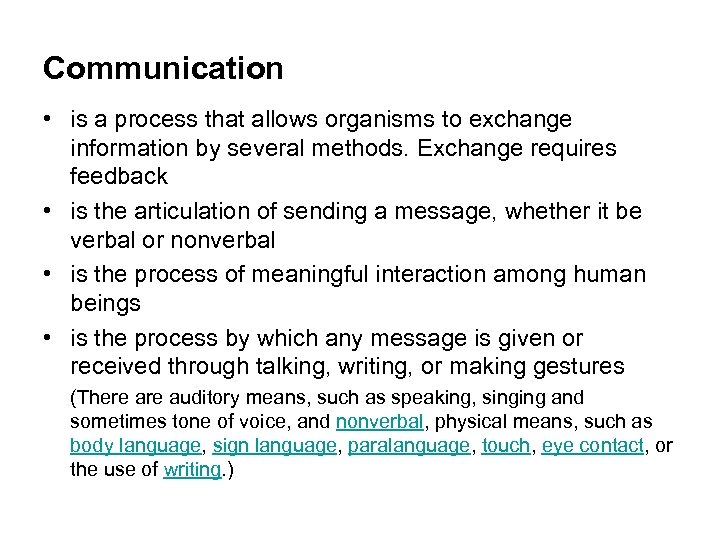 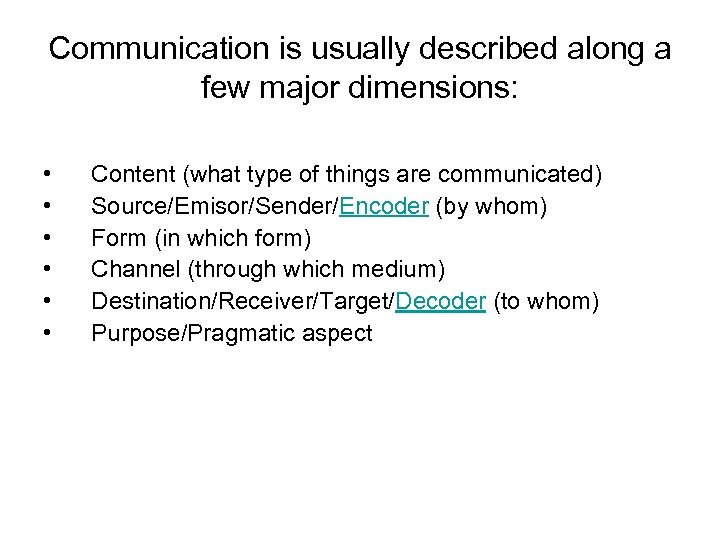 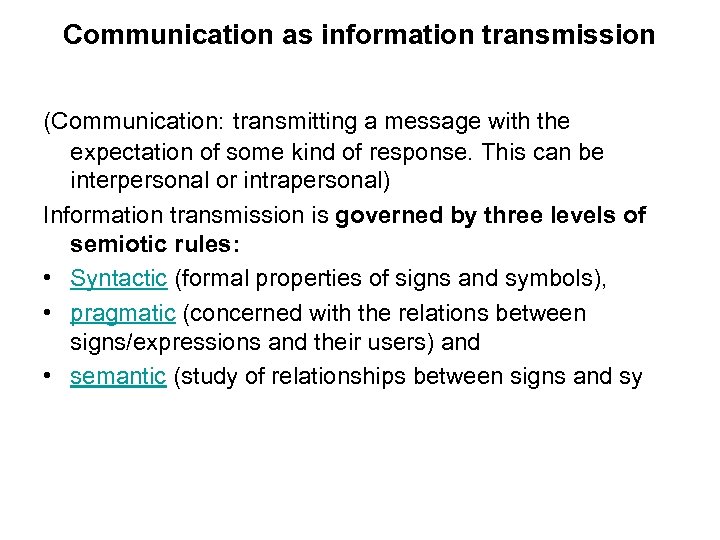 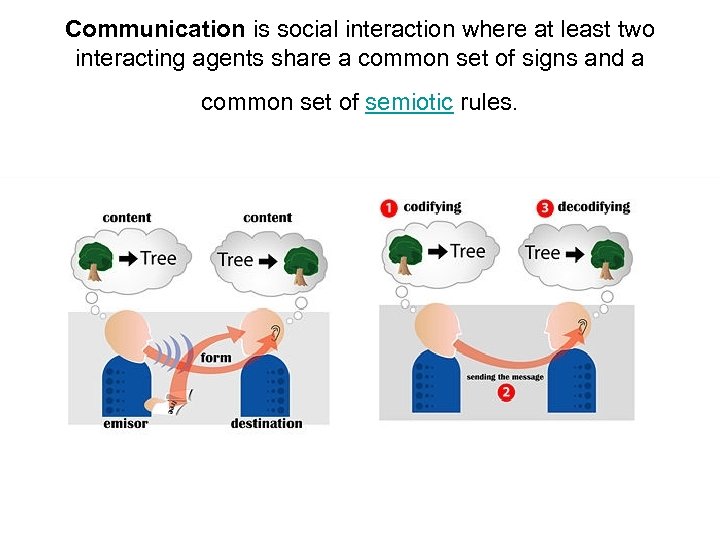 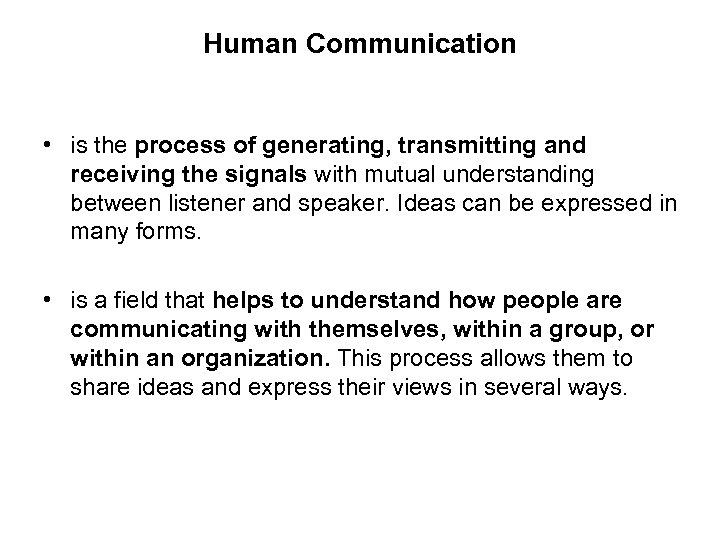 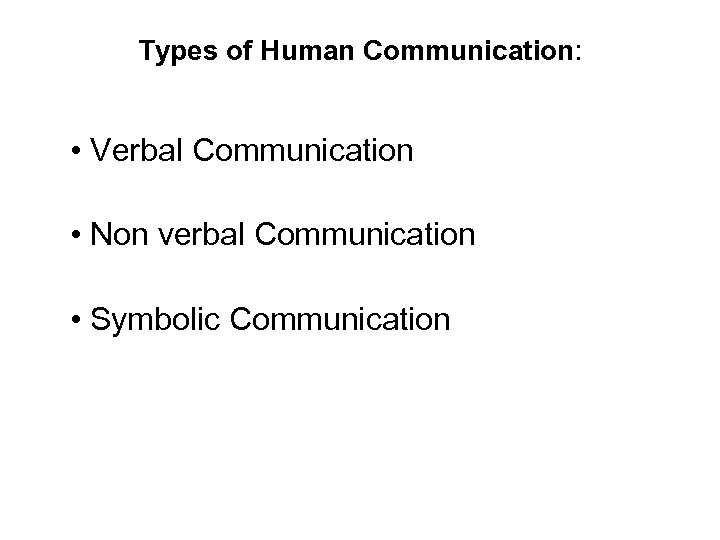 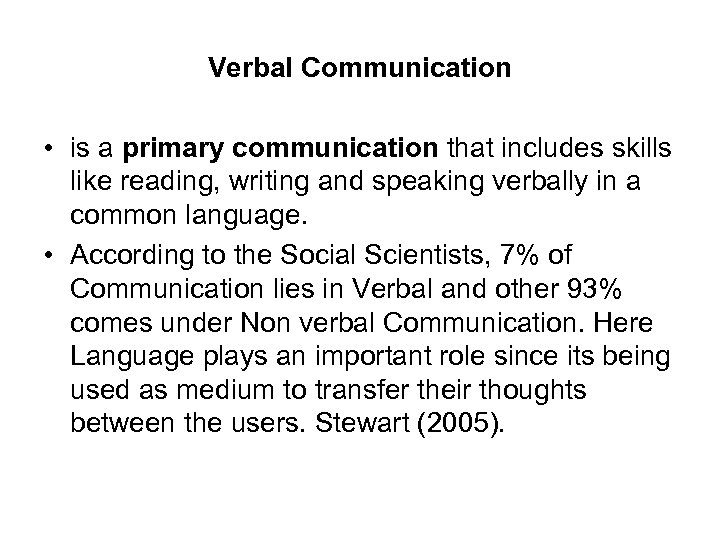 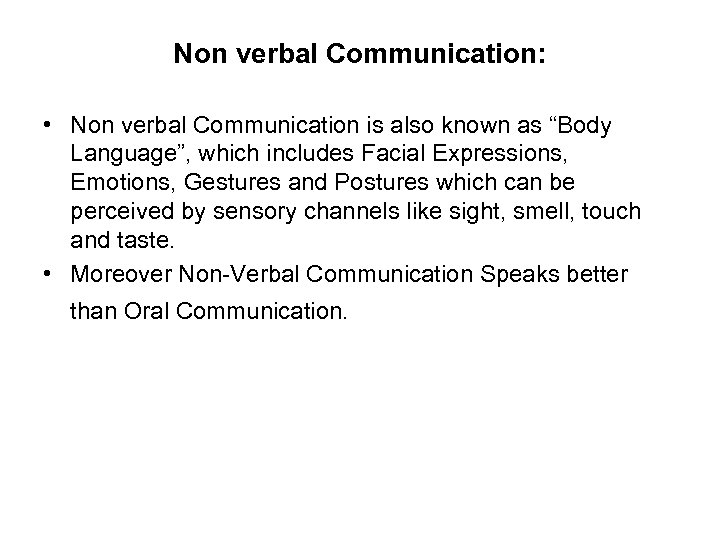 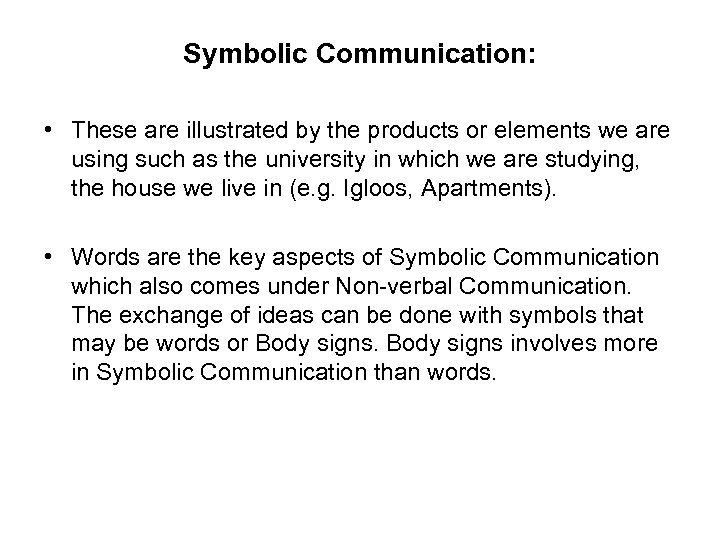 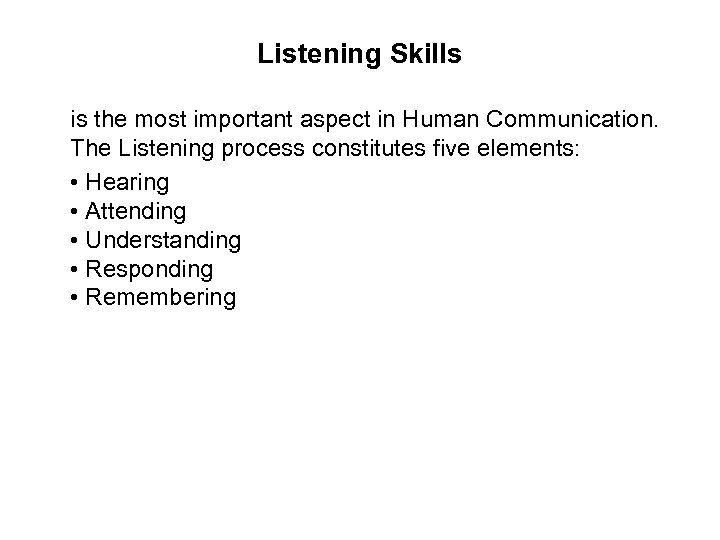 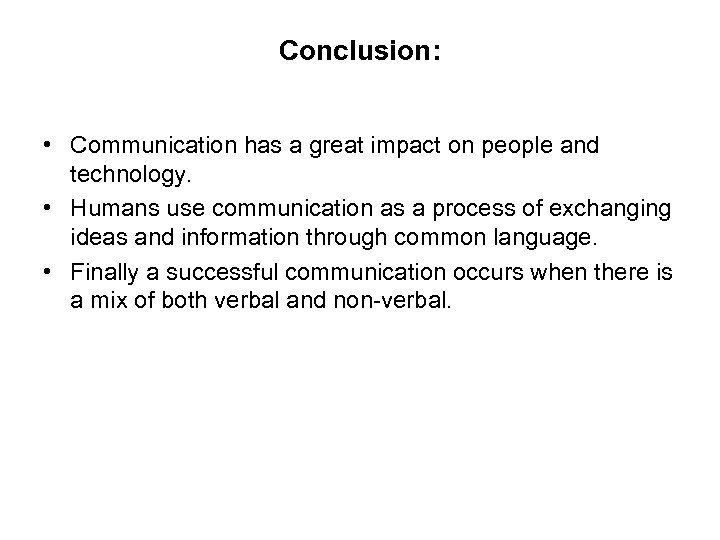 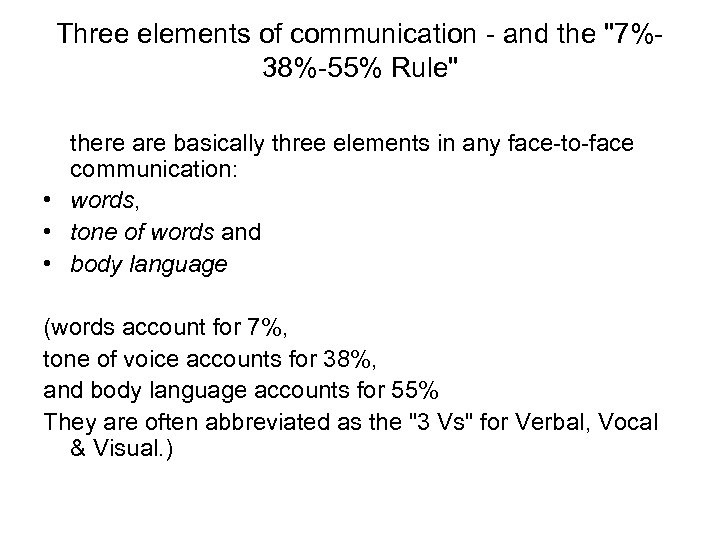 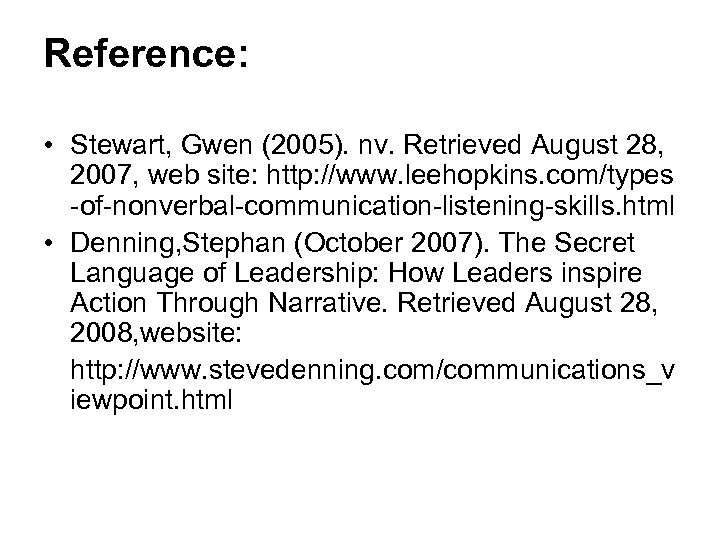 Communication is so much more than just the words we say • Research by Birtwhisle in 1970 studied communication where the meaning of the words alone was potentially ambiguous. His results showed that we make meaning from the following factors: • 55% is taken from body language 38% is taken from tone of voice 7% is based solely on the words

Communication • is a process that allows organisms to exchange information by several methods. Exchange requires feedback • is the articulation of sending a message, whether it be verbal or nonverbal • is the process of meaningful interaction among human beings • is the process by which any message is given or received through talking, writing, or making gestures (There auditory means, such as speaking, singing and sometimes tone of voice, and nonverbal, physical means, such as body language, sign language, paralanguage, touch, eye contact, or the use of writing. )

Communication is usually described along a few major dimensions: • • • Content (what type of things are communicated) Source/Emisor/Sender/Encoder (by whom) Form (in which form) Channel (through which medium) Destination/Receiver/Target/Decoder (to whom) Purpose/Pragmatic aspect

Communication as information transmission (Communication: transmitting a message with the expectation of some kind of response. This can be interpersonal or intrapersonal) Information transmission is governed by three levels of semiotic rules: • Syntactic (formal properties of signs and symbols), • pragmatic (concerned with the relations between signs/expressions and their users) and • semantic (study of relationships between signs and sy

Human Communication • is the process of generating, transmitting and receiving the signals with mutual understanding between listener and speaker. Ideas can be expressed in many forms. • is a field that helps to understand how people are communicating with themselves, within a group, or within an organization. This process allows them to share ideas and express their views in several ways.

Verbal Communication • is a primary communication that includes skills like reading, writing and speaking verbally in a common language. • According to the Social Scientists, 7% of Communication lies in Verbal and other 93% comes under Non verbal Communication. Here Language plays an important role since its being used as medium to transfer their thoughts between the users. Stewart (2005).

Conclusion: • Communication has a great impact on people and technology. • Humans use communication as a process of exchanging ideas and information through common language. • Finally a successful communication occurs when there is a mix of both verbal and non-verbal.