Once upon a time there were 3 piggy 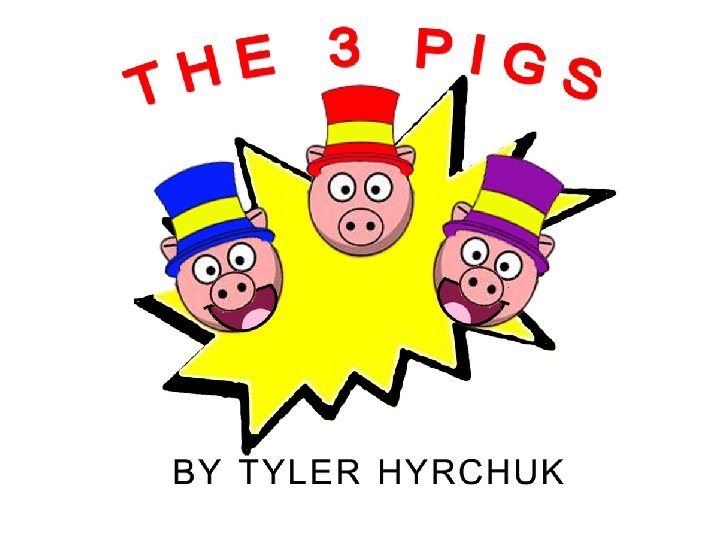 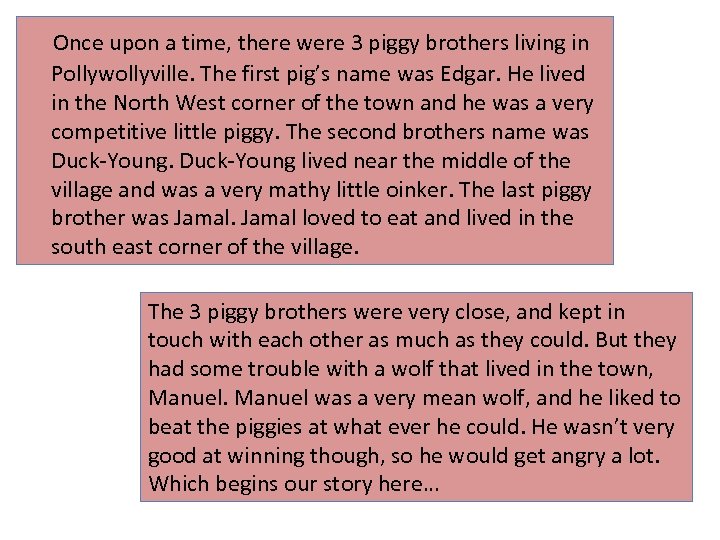 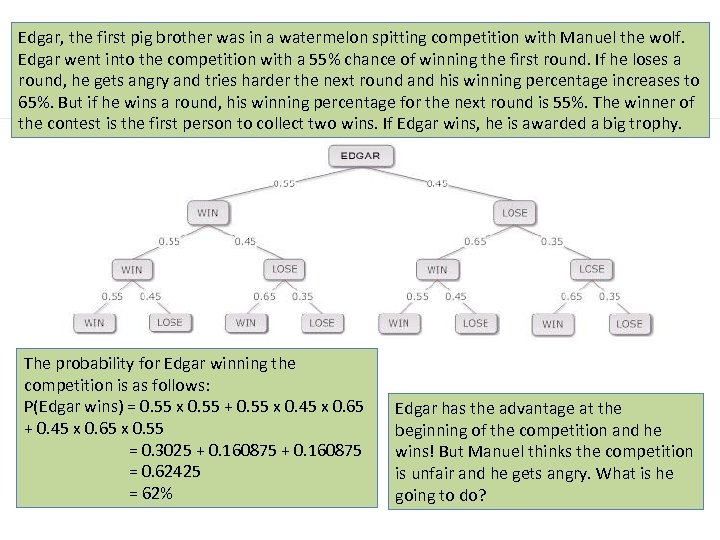 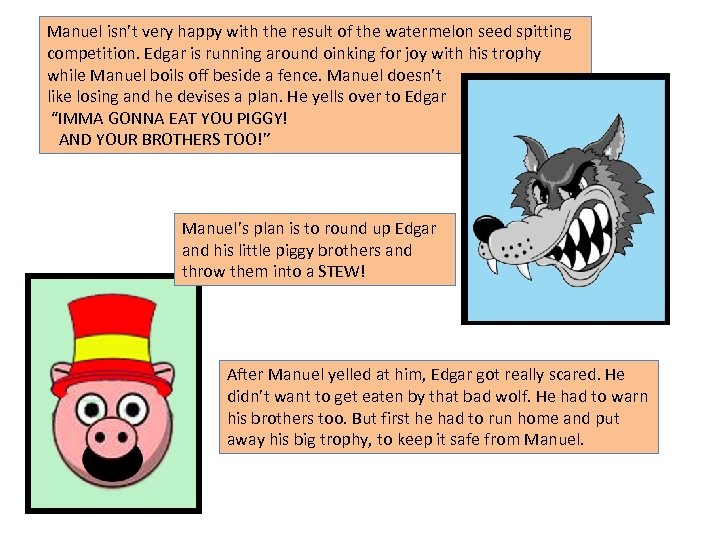 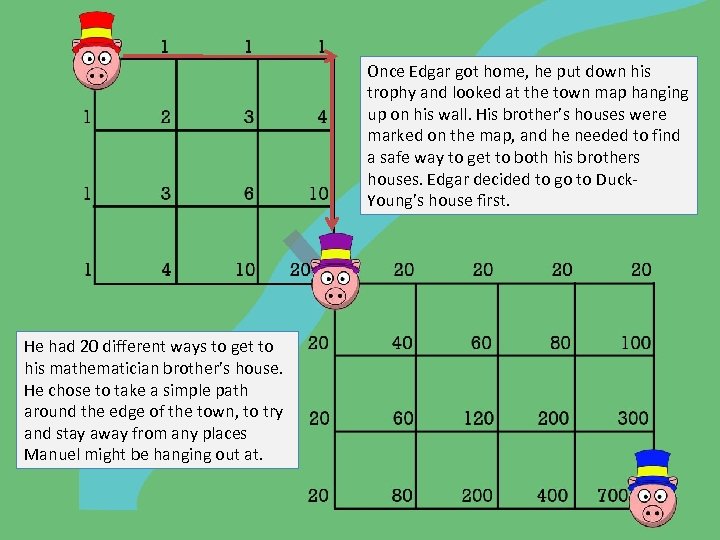 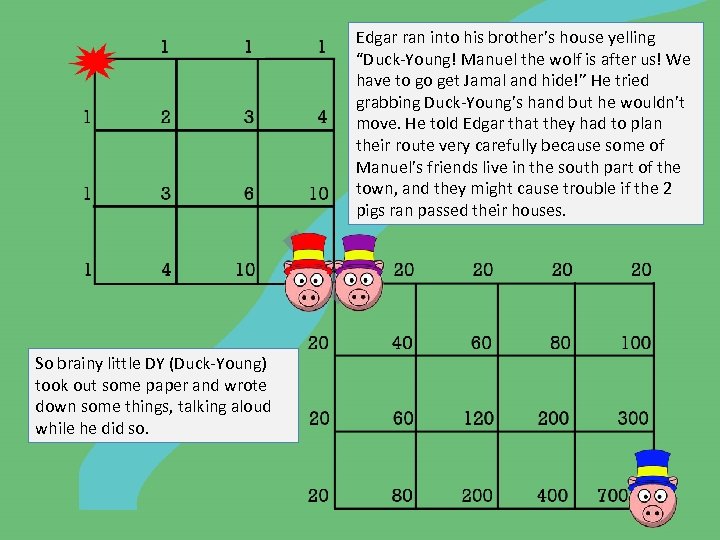 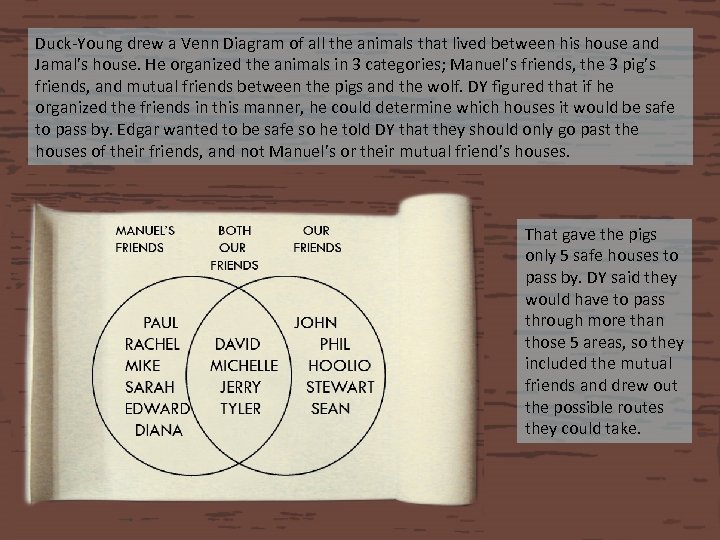 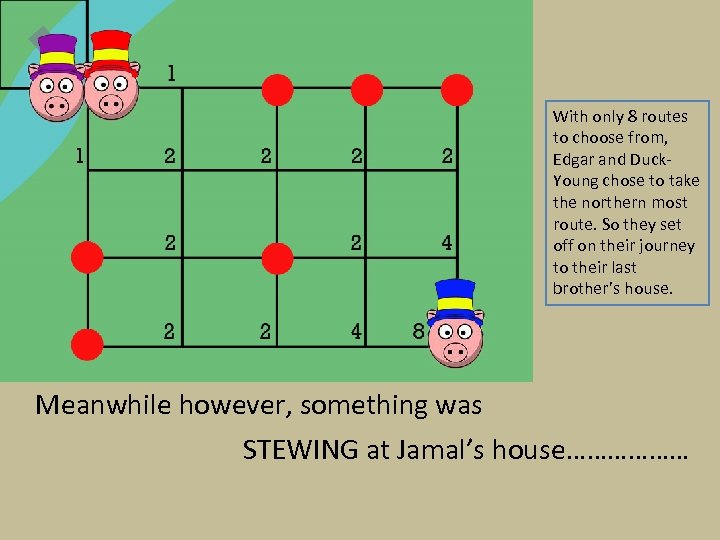 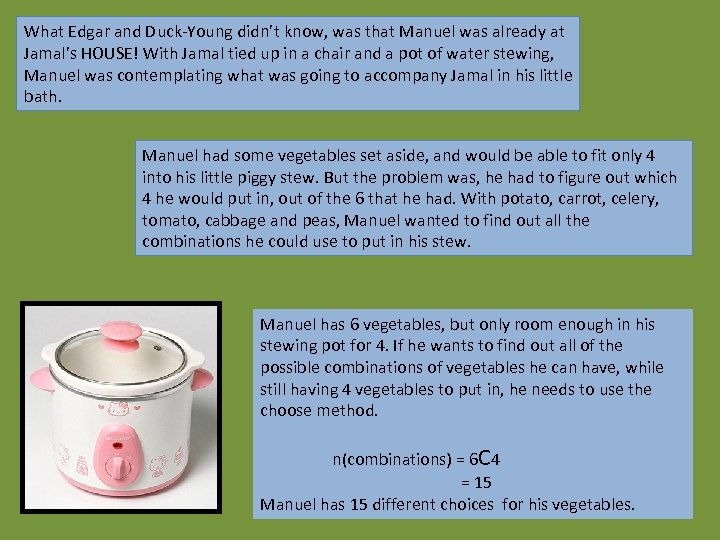 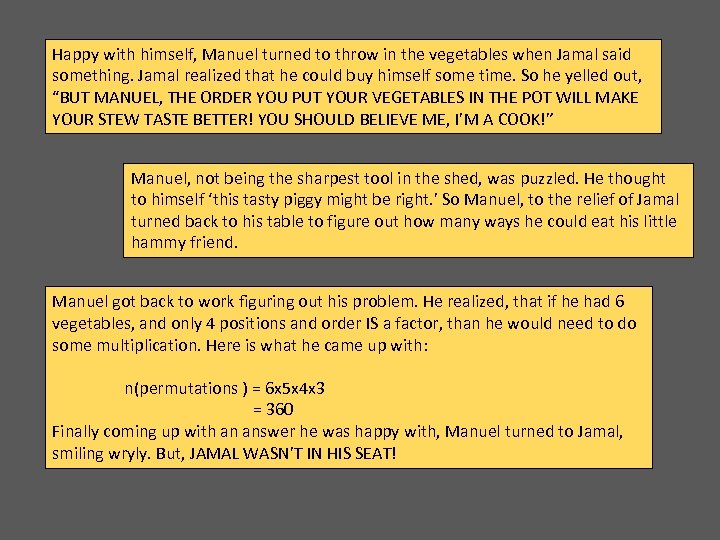 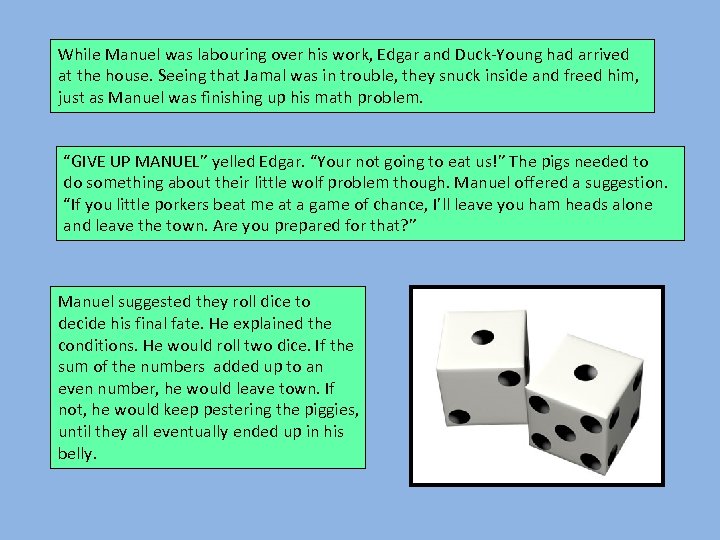 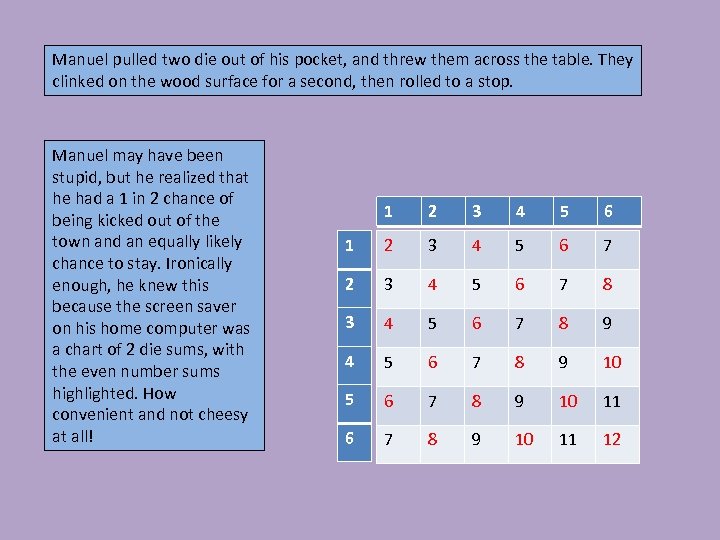 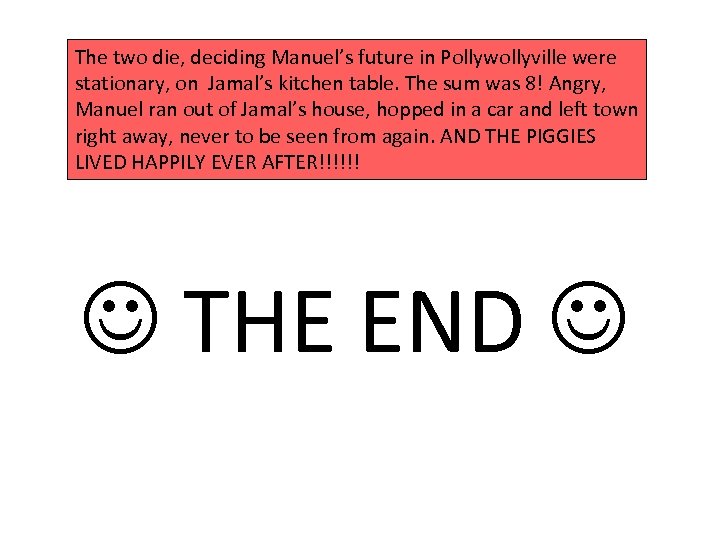 Скачать презентацию Once upon a time there were 3 piggy

Once upon a time, there were 3 piggy brothers living in Pollywollyville. The first pig’s name was Edgar. He lived in the North West corner of the town and he was a very competitive little piggy. The second brothers name was Duck-Young lived near the middle of the village and was a very mathy little oinker. The last piggy brother was Jamal loved to eat and lived in the south east corner of the village. The 3 piggy brothers were very close, and kept in touch with each other as much as they could. But they had some trouble with a wolf that lived in the town, Manuel was a very mean wolf, and he liked to beat the piggies at what ever he could. He wasn’t very good at winning though, so he would get angry a lot. Which begins our story here…

Manuel isn’t very happy with the result of the watermelon seed spitting competition. Edgar is running around oinking for joy with his trophy while Manuel boils off beside a fence. Manuel doesn’t like losing and he devises a plan. He yells over to Edgar “IMMA GONNA EAT YOU PIGGY! AND YOUR BROTHERS TOO!” Manuel’s plan is to round up Edgar and his little piggy brothers and throw them into a STEW! After Manuel yelled at him, Edgar got really scared. He didn’t want to get eaten by that bad wolf. He had to warn his brothers too. But first he had to run home and put away his big trophy, to keep it safe from Manuel.

Once Edgar got home, he put down his trophy and looked at the town map hanging up on his wall. His brother’s houses were marked on the map, and he needed to find a safe way to get to both his brothers houses. Edgar decided to go to Duck. Young’s house first. He had 20 different ways to get to his mathematician brother’s house. He chose to take a simple path around the edge of the town, to try and stay away from any places Manuel might be hanging out at.

Edgar ran into his brother’s house yelling “Duck-Young! Manuel the wolf is after us! We have to go get Jamal and hide!” He tried grabbing Duck-Young’s hand but he wouldn’t move. He told Edgar that they had to plan their route very carefully because some of Manuel’s friends live in the south part of the town, and they might cause trouble if the 2 pigs ran passed their houses. So brainy little DY (Duck-Young) took out some paper and wrote down some things, talking aloud while he did so.

Duck-Young drew a Venn Diagram of all the animals that lived between his house and Jamal’s house. He organized the animals in 3 categories; Manuel’s friends, the 3 pig’s friends, and mutual friends between the pigs and the wolf. DY figured that if he organized the friends in this manner, he could determine which houses it would be safe to pass by. Edgar wanted to be safe so he told DY that they should only go past the houses of their friends, and not Manuel’s or their mutual friend’s houses. That gave the pigs only 5 safe houses to pass by. DY said they would have to pass through more than those 5 areas, so they included the mutual friends and drew out the possible routes they could take.

With only 8 routes to choose from, Edgar and Duck. Young chose to take the northern most route. So they set off on their journey to their last brother’s house. Meanwhile however, something was STEWING at Jamal’s house………………

What Edgar and Duck-Young didn’t know, was that Manuel was already at Jamal’s HOUSE! With Jamal tied up in a chair and a pot of water stewing, Manuel was contemplating what was going to accompany Jamal in his little bath. Manuel had some vegetables set aside, and would be able to fit only 4 into his little piggy stew. But the problem was, he had to figure out which 4 he would put in, out of the 6 that he had. With potato, carrot, celery, tomato, cabbage and peas, Manuel wanted to find out all the combinations he could use to put in his stew. Manuel has 6 vegetables, but only room enough in his stewing pot for 4. If he wants to find out all of the possible combinations of vegetables he can have, while still having 4 vegetables to put in, he needs to use the choose method. n(combinations) = 6 C 4 = 15 Manuel has 15 different choices for his vegetables.

Happy with himself, Manuel turned to throw in the vegetables when Jamal said something. Jamal realized that he could buy himself some time. So he yelled out, “BUT MANUEL, THE ORDER YOU PUT YOUR VEGETABLES IN THE POT WILL MAKE YOUR STEW TASTE BETTER! YOU SHOULD BELIEVE ME, I’M A COOK!” Manuel, not being the sharpest tool in the shed, was puzzled. He thought to himself ‘this tasty piggy might be right. ’ So Manuel, to the relief of Jamal turned back to his table to figure out how many ways he could eat his little hammy friend. Manuel got back to work figuring out his problem. He realized, that if he had 6 vegetables, and only 4 positions and order IS a factor, than he would need to do some multiplication. Here is what he came up with: n(permutations ) = 6 x 5 x 4 x 3 = 360 Finally coming up with an answer he was happy with, Manuel turned to Jamal, smiling wryly. But, JAMAL WASN’T IN HIS SEAT!

While Manuel was labouring over his work, Edgar and Duck-Young had arrived at the house. Seeing that Jamal was in trouble, they snuck inside and freed him, just as Manuel was finishing up his math problem. “GIVE UP MANUEL” yelled Edgar. “Your not going to eat us!” The pigs needed to do something about their little wolf problem though. Manuel offered a suggestion. “If you little porkers beat me at a game of chance, I’ll leave you ham heads alone and leave the town. Are you prepared for that? ” Manuel suggested they roll dice to decide his final fate. He explained the conditions. He would roll two dice. If the sum of the numbers added up to an even number, he would leave town. If not, he would keep pestering the piggies, until they all eventually ended up in his belly.

Manuel pulled two die out of his pocket, and threw them across the table. They clinked on the wood surface for a second, then rolled to a stop. Manuel may have been stupid, but he realized that he had a 1 in 2 chance of being kicked out of the town and an equally likely chance to stay. Ironically enough, he knew this because the screen saver on his home computer was a chart of 2 die sums, with the even number sums highlighted. How convenient and not cheesy at all! 1 2 3 4 5 6 7 8 9 4 5 6 7 8 9 10 11 12

The two die, deciding Manuel’s future in Pollywollyville were stationary, on Jamal’s kitchen table. The sum was 8! Angry, Manuel ran out of Jamal’s house, hopped in a car and left town right away, never to be seen from again. AND THE PIGGIES LIVED HAPPILY EVER AFTER!!!!!! THE END