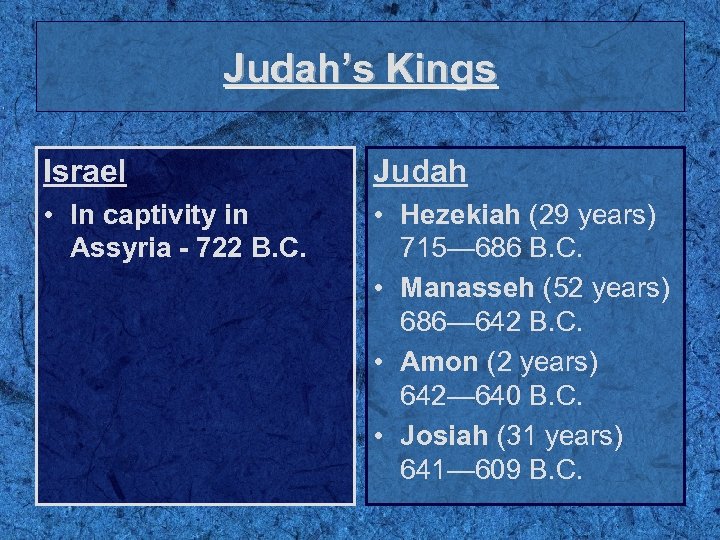 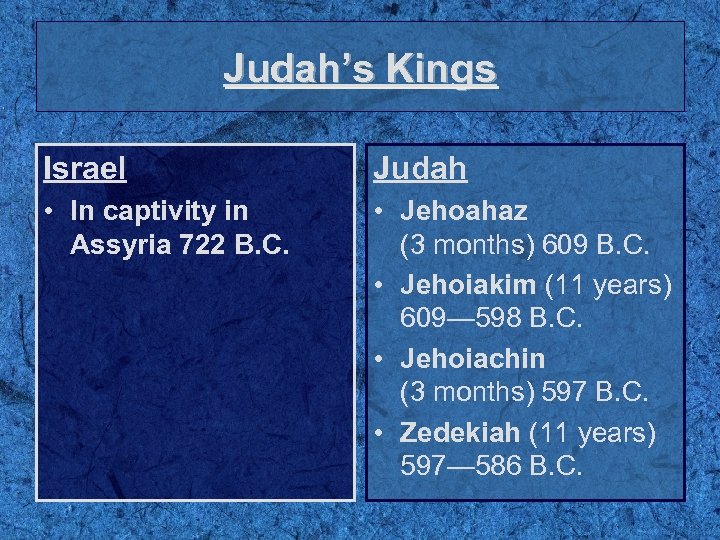 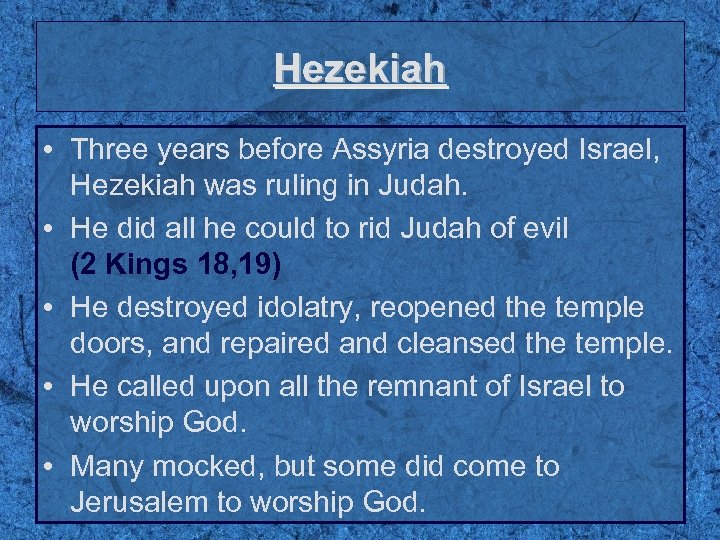 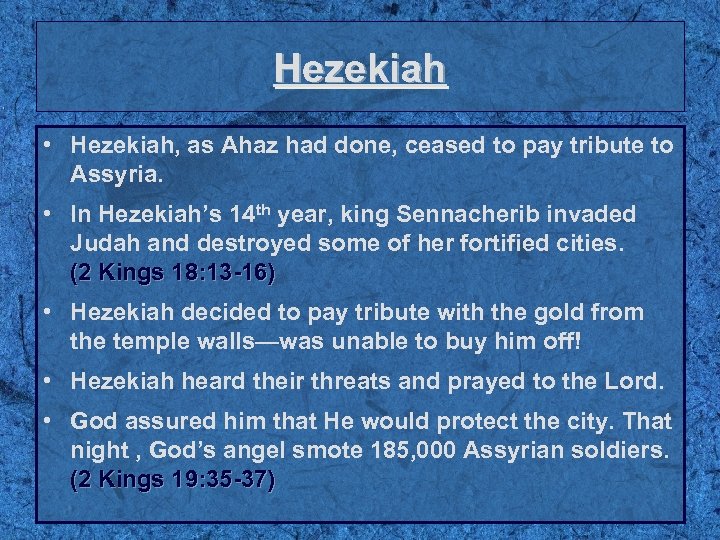 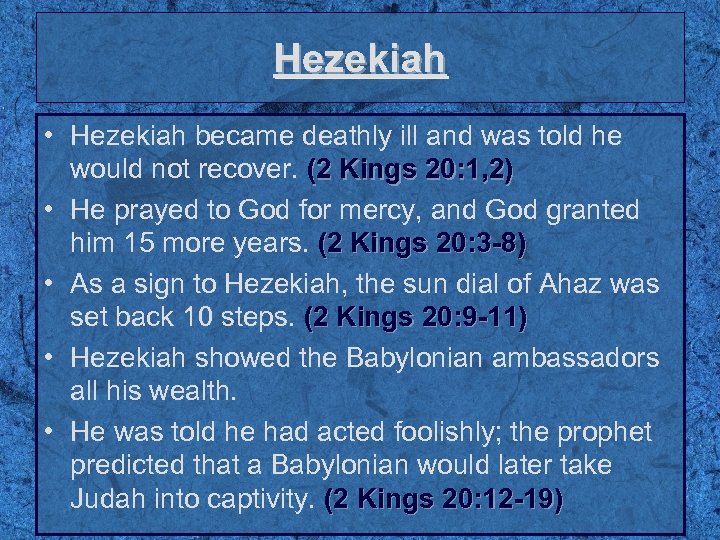 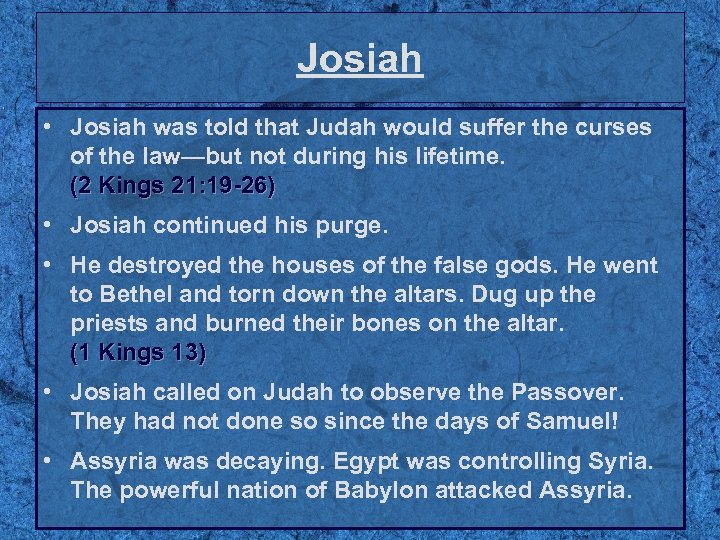 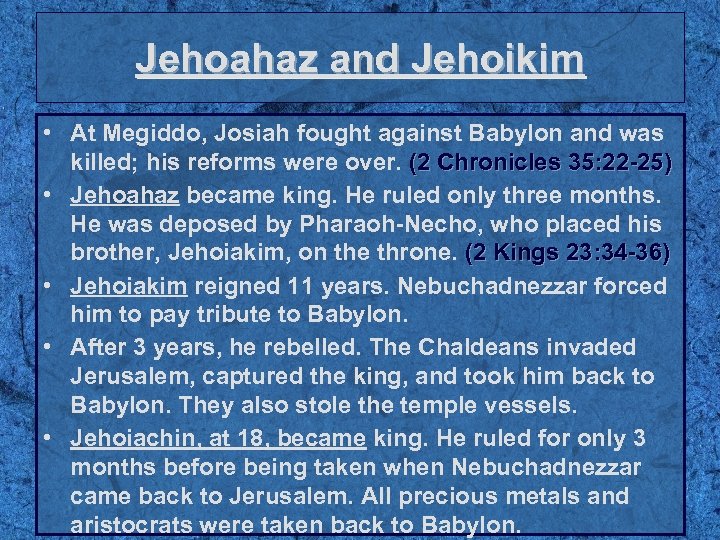 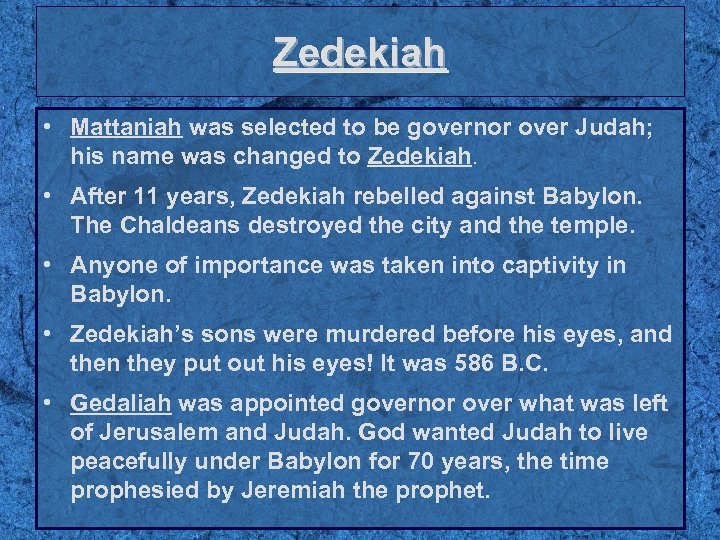 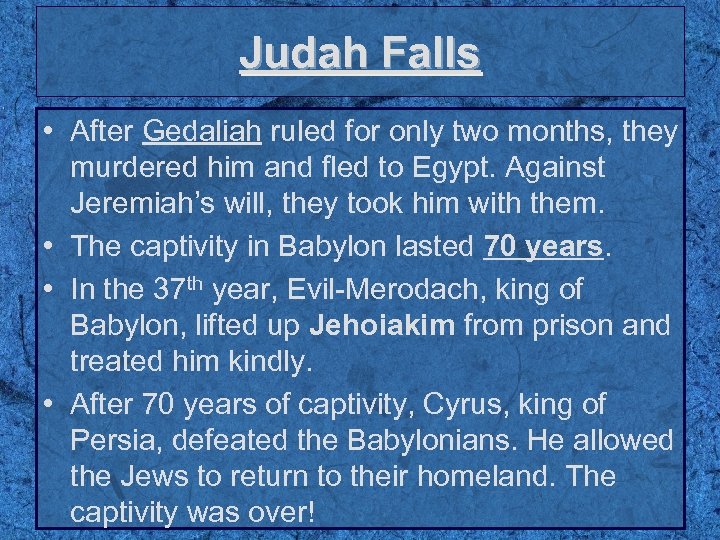 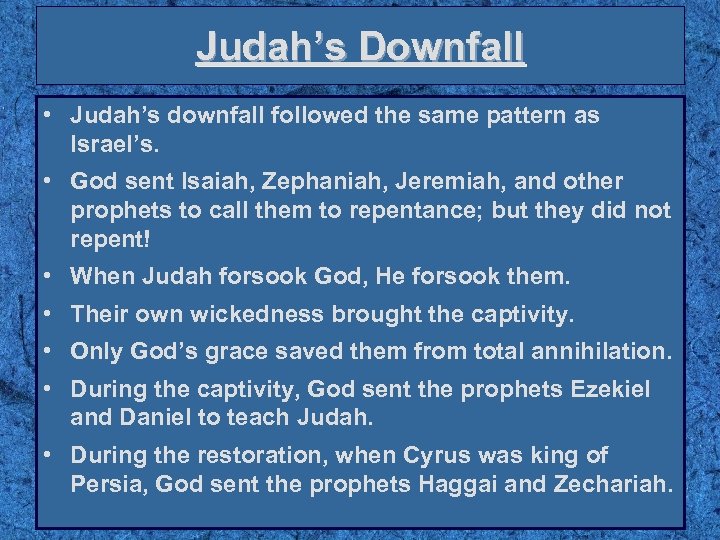 Hezekiah • Three years before Assyria destroyed Israel, Hezekiah was ruling in Judah. • He did all he could to rid Judah of evil (2 Kings 18, 19) • He destroyed idolatry, reopened the temple doors, and repaired and cleansed the temple. • He called upon all the remnant of Israel to worship God. • Many mocked, but some did come to Jerusalem to worship God.

Hezekiah • Hezekiah, as Ahaz had done, ceased to pay tribute to Assyria. • In Hezekiah’s 14 th year, king Sennacherib invaded Judah and destroyed some of her fortified cities. (2 Kings 18: 13 -16) • Hezekiah decided to pay tribute with the gold from the temple walls—was unable to buy him off! • Hezekiah heard their threats and prayed to the Lord. • God assured him that He would protect the city. That night , God’s angel smote 185, 000 Assyrian soldiers. (2 Kings 19: 35 -37)

Manasseh • Hezekiah died, and his son Manasseh (only 12) became king of Judah. He would reign for 55 years. (2 Kings 21: 1 -15) • Manasseh lured Judah back into wickedness and idolatry. (2 Kings 21: 9 -16) • He even offered his own son in sacrifice to an idol in the valley of Hinnom. (2 Kings 21: 6) • Assyria captured Manasseh and took him to Babylon, where he repented and prayed to God forgiveness. • Manasseh’s kingdom was restored. He built a larger wall around Jerusalem and took away the foreign gods. (2 Kings 33: 10 -18)

Amon and Josiah • Amon succeeded Manasseh, but he lasted only two years. He was wicked. (2 Kings 21: 19 -26) • Judah’s citizens murdered the wicked servants who killed the king and put his 8 -year-old son, Josiah, on the throne. (2 Kings 22: 1, 2) • Josiah ruled for 31 years. He purged the idolatry from Judah. (2 Kings 22: 3 -7) • Hilkiah found the book of the Law of God and brought it to the young king. • When Josiah understood their failure to keep the law, he asked for word of what would befall Judah because of her great sin.

Josiah • Josiah was told that Judah would suffer the curses of the law—but not during his lifetime. (2 Kings 21: 19 -26) • Josiah continued his purge. • He destroyed the houses of the false gods. He went to Bethel and torn down the altars. Dug up the priests and burned their bones on the altar. (1 Kings 13) • Josiah called on Judah to observe the Passover. They had not done so since the days of Samuel! • Assyria was decaying. Egypt was controlling Syria. The powerful nation of Babylon attacked Assyria.

Jehoahaz and Jehoikim • At Megiddo, Josiah fought against Babylon and was killed; his reforms were over. (2 Chronicles 35: 22 -25) • Jehoahaz became king. He ruled only three months. He was deposed by Pharaoh-Necho, who placed his brother, Jehoiakim, on the throne. (2 Kings 23: 34 -36) • Jehoiakim reigned 11 years. Nebuchadnezzar forced him to pay tribute to Babylon. • After 3 years, he rebelled. The Chaldeans invaded Jerusalem, captured the king, and took him back to Babylon. They also stole the temple vessels. • Jehoiachin, at 18, became king. He ruled for only 3 months before being taken when Nebuchadnezzar came back to Jerusalem. All precious metals and aristocrats were taken back to Babylon.

Zedekiah • Mattaniah was selected to be governor over Judah; his name was changed to Zedekiah. • After 11 years, Zedekiah rebelled against Babylon. The Chaldeans destroyed the city and the temple. • Anyone of importance was taken into captivity in Babylon. • Zedekiah’s sons were murdered before his eyes, and then they put out his eyes! It was 586 B. C. • Gedaliah was appointed governor over what was left of Jerusalem and Judah. God wanted Judah to live peacefully under Babylon for 70 years, the time prophesied by Jeremiah the prophet.

Judah Falls • After Gedaliah ruled for only two months, they murdered him and fled to Egypt. Against Jeremiah’s will, they took him with them. • The captivity in Babylon lasted 70 years. • In the 37 th year, Evil-Merodach, king of Babylon, lifted up Jehoiakim from prison and treated him kindly. • After 70 years of captivity, Cyrus, king of Persia, defeated the Babylonians. He allowed the Jews to return to their homeland. The captivity was over!

Judah’s Downfall • Judah’s downfall followed the same pattern as Israel’s. • God sent Isaiah, Zephaniah, Jeremiah, and other prophets to call them to repentance; but they did not repent! • When Judah forsook God, He forsook them. • Their own wickedness brought the captivity. • Only God’s grace saved them from total annihilation. • During the captivity, God sent the prophets Ezekiel and Daniel to teach Judah. • During the restoration, when Cyrus was king of Persia, God sent the prophets Haggai and Zechariah.