OBJECTIVE Comprehend the Constitutional Compromises and 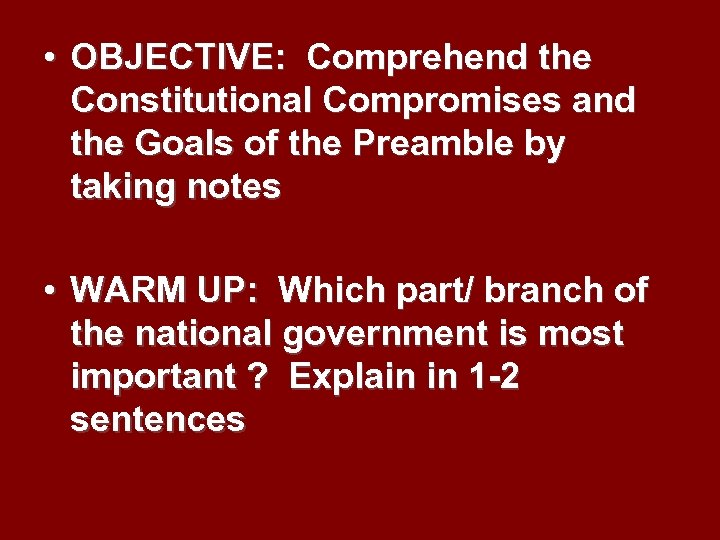 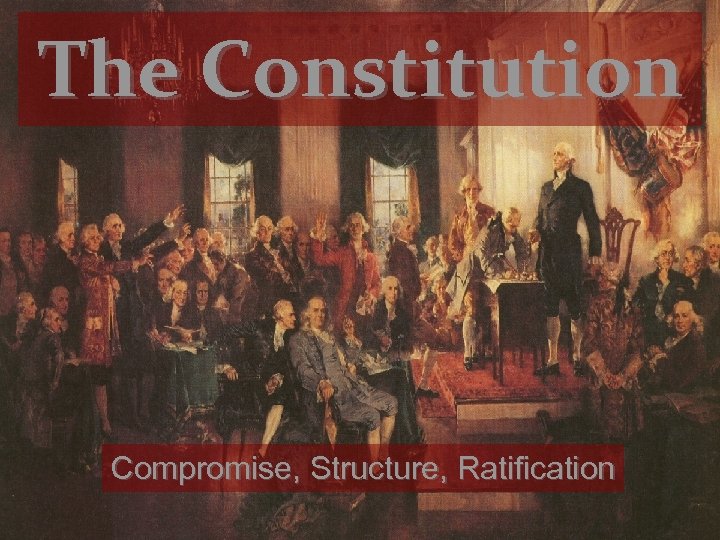 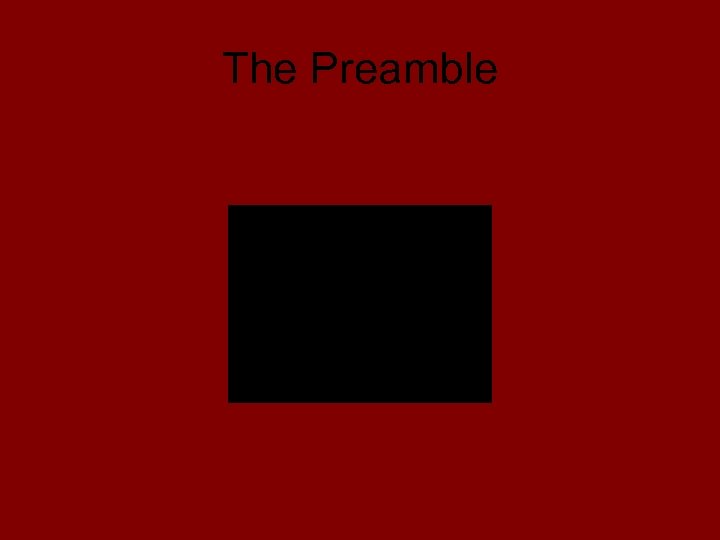 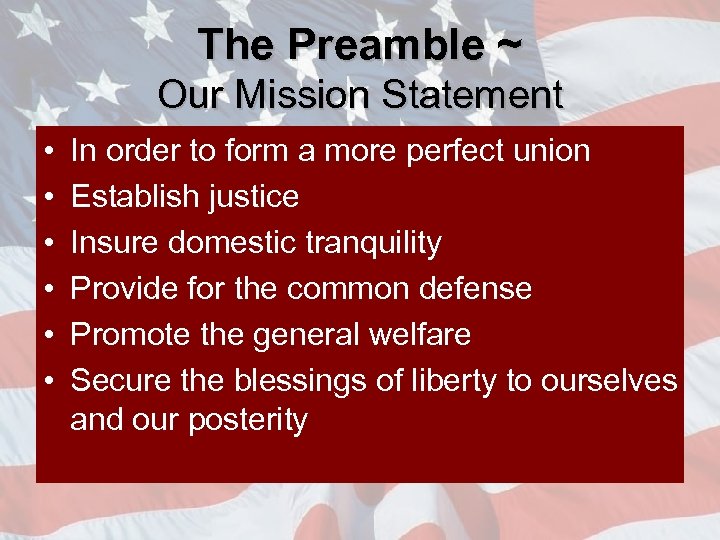 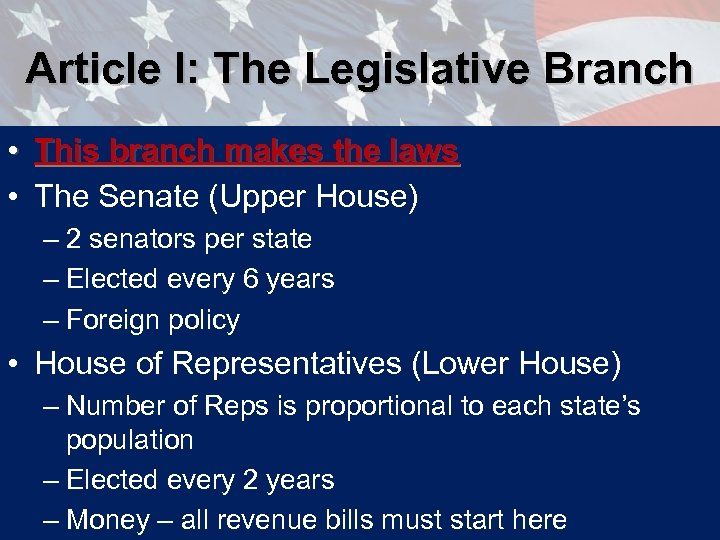 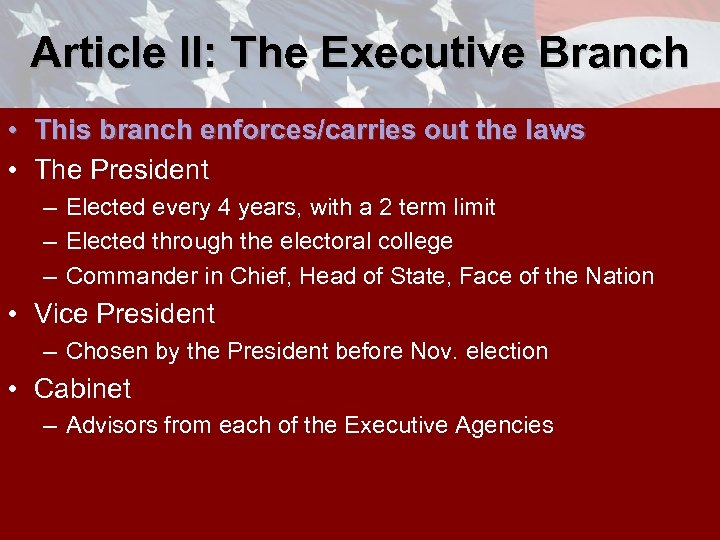 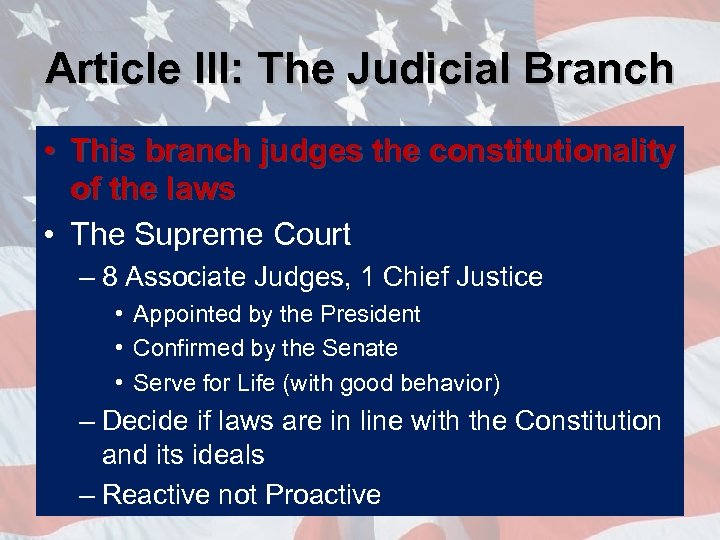 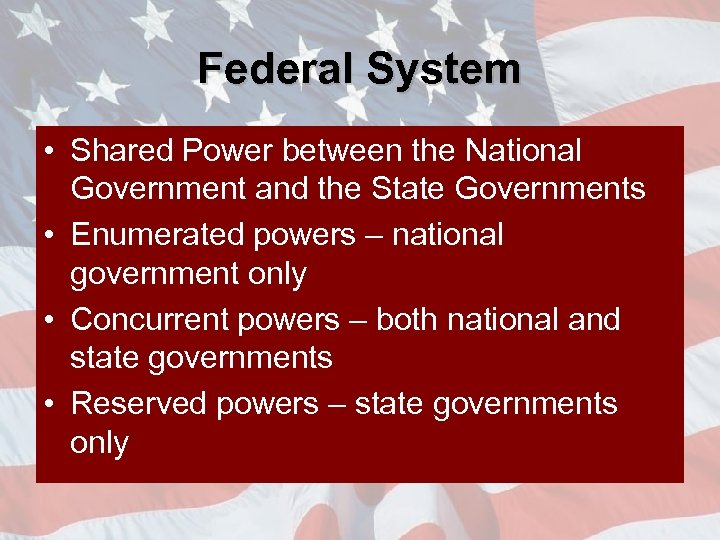 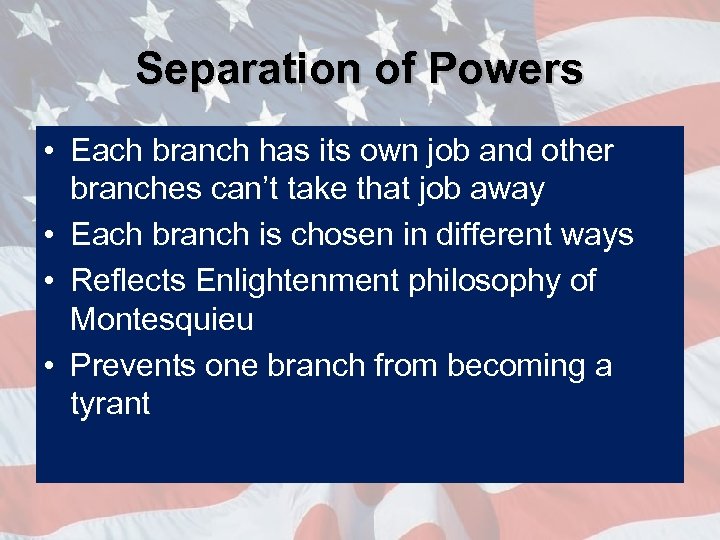 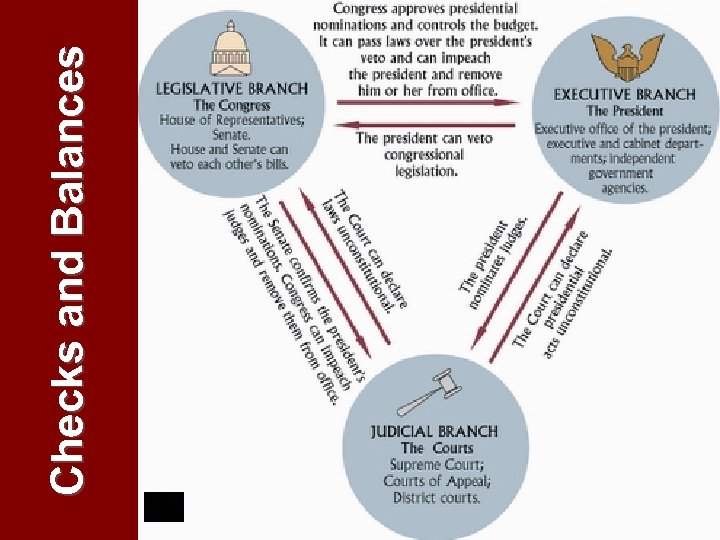 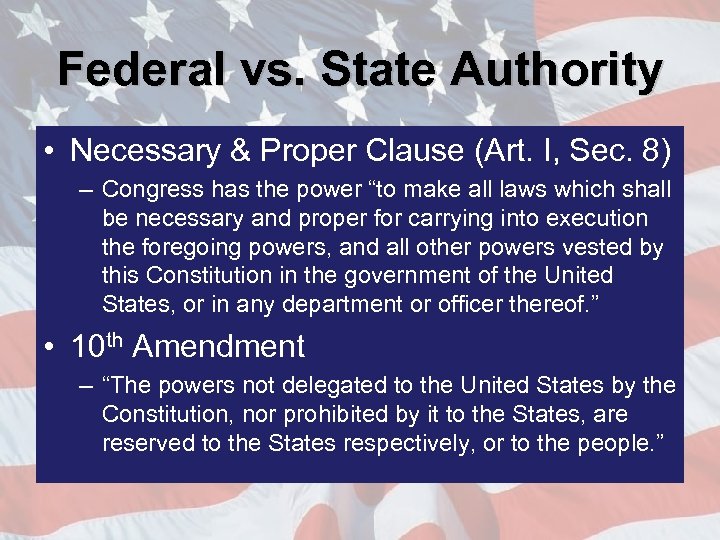 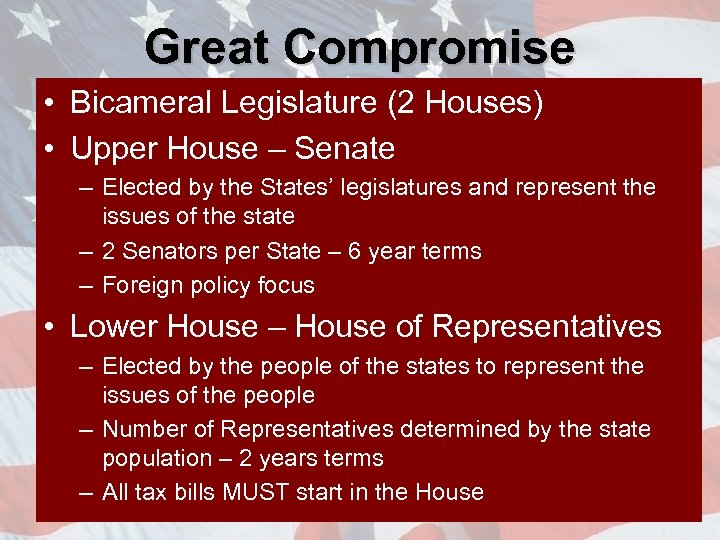 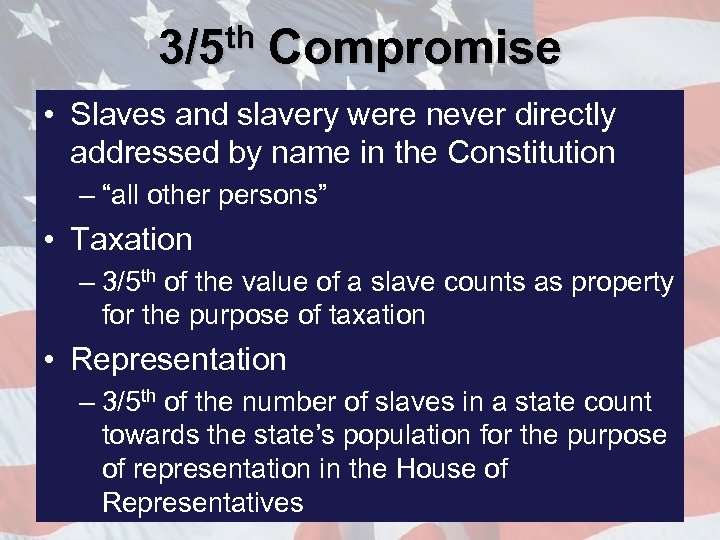 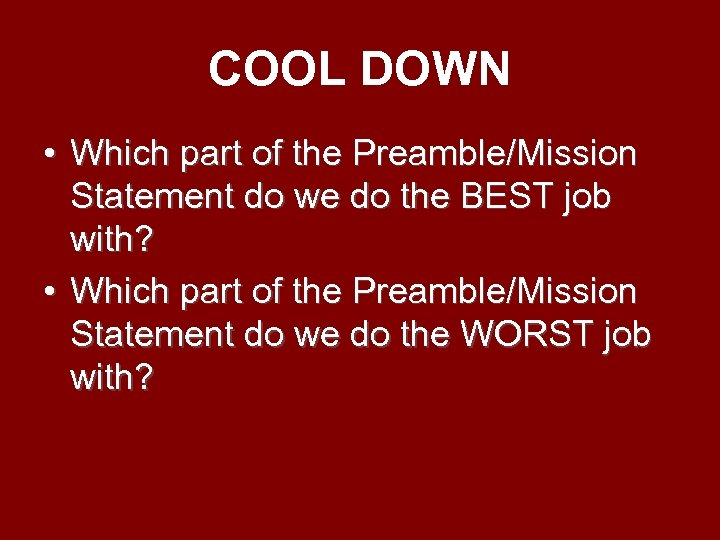 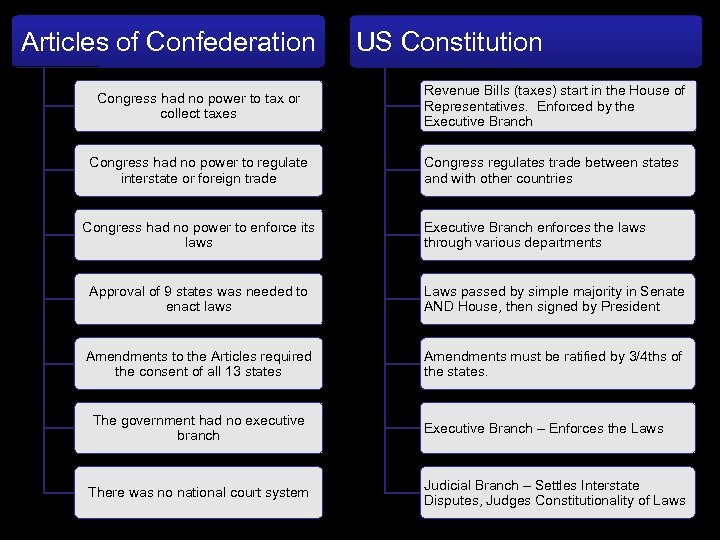 • OBJECTIVE: Comprehend the Constitutional Compromises and the Goals of the Preamble by taking notes • WARM UP: Which part/ branch of the national government is most important ? Explain in 1 -2 sentences

Article I: The Legislative Branch • This branch makes the laws • The Senate (Upper House) – 2 senators per state – Elected every 6 years – Foreign policy • House of Representatives (Lower House) – Number of Reps is proportional to each state’s population – Elected every 2 years – Money – all revenue bills must start here

Article II: The Executive Branch • This branch enforces/carries out the laws • The President – Elected every 4 years, with a 2 term limit – Elected through the electoral college – Commander in Chief, Head of State, Face of the Nation • Vice President – Chosen by the President before Nov. election • Cabinet – Advisors from each of the Executive Agencies

Article III: The Judicial Branch • This branch judges the constitutionality of the laws • The Supreme Court – 8 Associate Judges, 1 Chief Justice • Appointed by the President • Confirmed by the Senate • Serve for Life (with good behavior) – Decide if laws are in line with the Constitution and its ideals – Reactive not Proactive

Federal vs. State Authority • Necessary & Proper Clause (Art. I, Sec. 8) – Congress has the power “to make all laws which shall be necessary and proper for carrying into execution the foregoing powers, and all other powers vested by this Constitution in the government of the United States, or in any department or officer thereof. ” • 10 th Amendment – “The powers not delegated to the United States by the Constitution, nor prohibited by it to the States, are reserved to the States respectively, or to the people. ”

Articles of Confederation US Constitution Congress had no power to tax or collect taxes Revenue Bills (taxes) start in the House of Representatives. Enforced by the Executive Branch Congress had no power to regulate interstate or foreign trade Congress regulates trade between states and with other countries Congress had no power to enforce its laws Executive Branch enforces the laws through various departments Approval of 9 states was needed to enact laws Laws passed by simple majority in Senate AND House, then signed by President Amendments to the Articles required the consent of all 13 states Amendments must be ratified by 3/4 ths of the states. The government had no executive branch There was no national court system Executive Branch – Enforces the Laws Judicial Branch – Settles Interstate Disputes, Judges Constitutionality of Laws