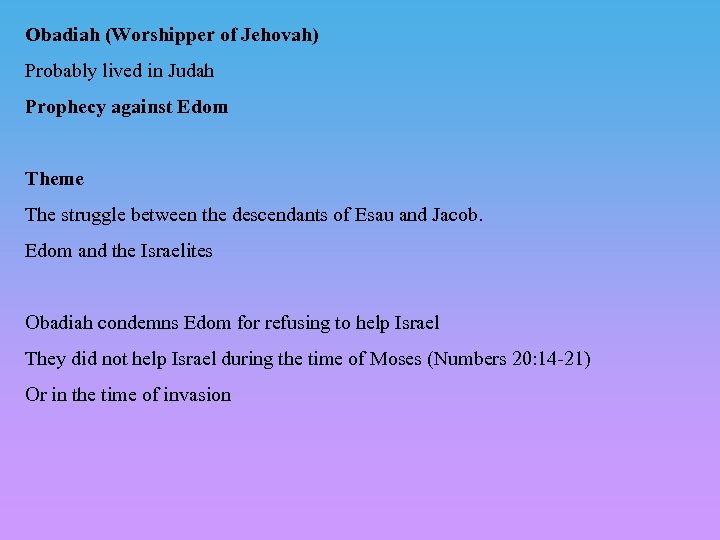 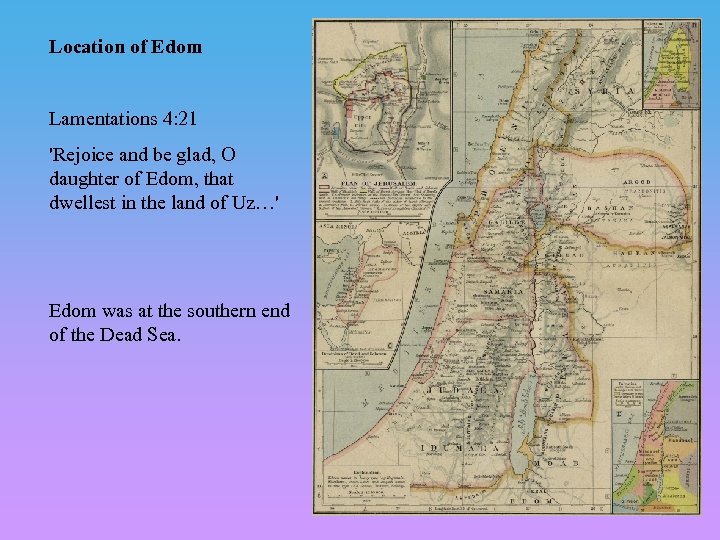 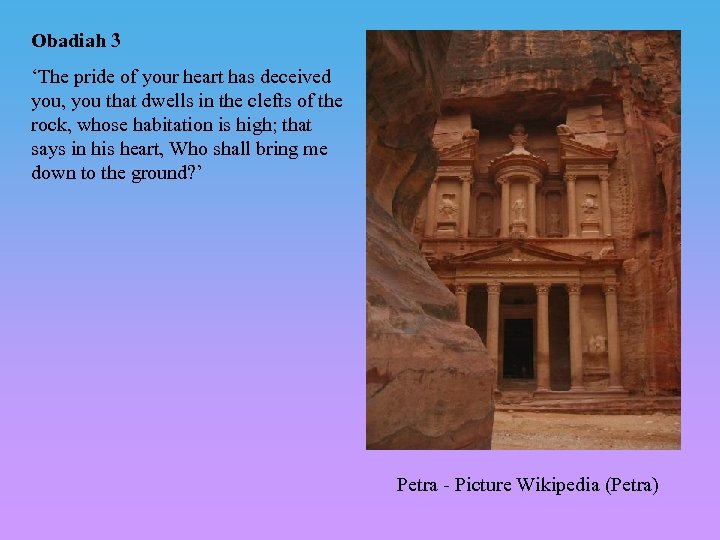 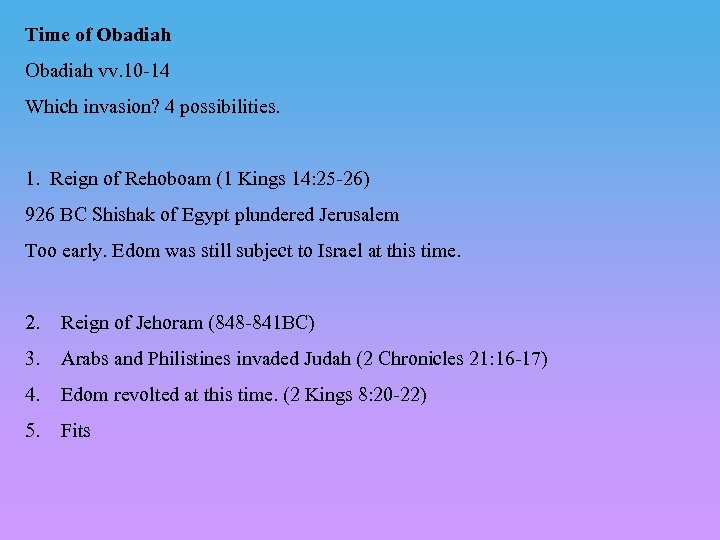 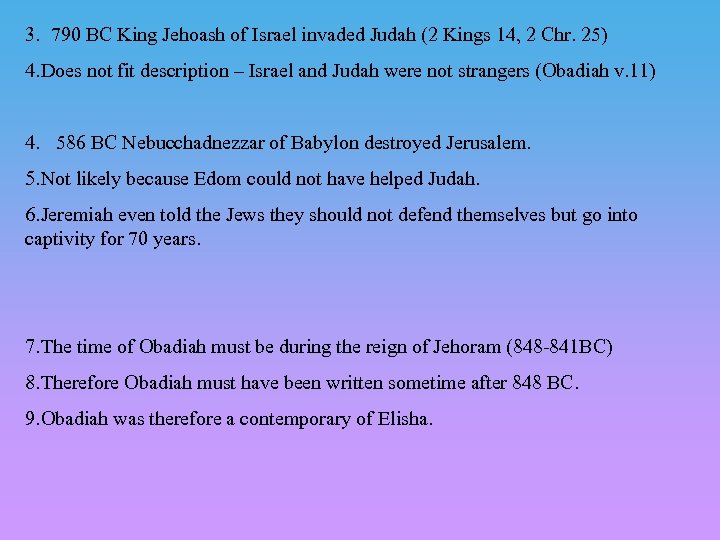 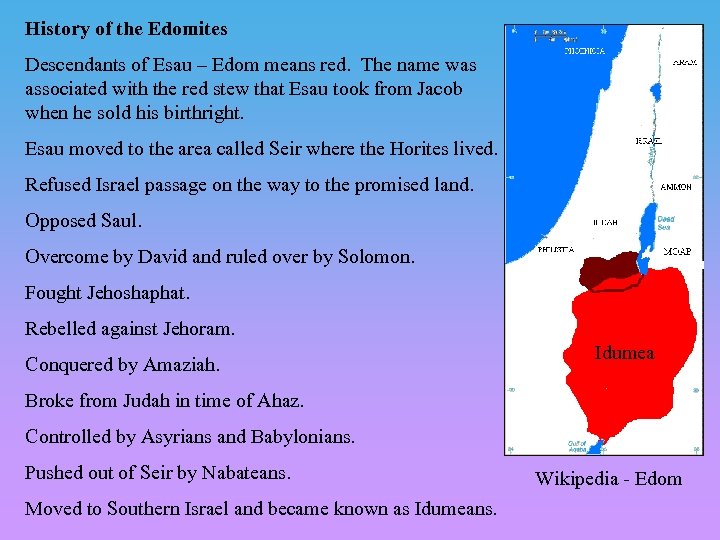 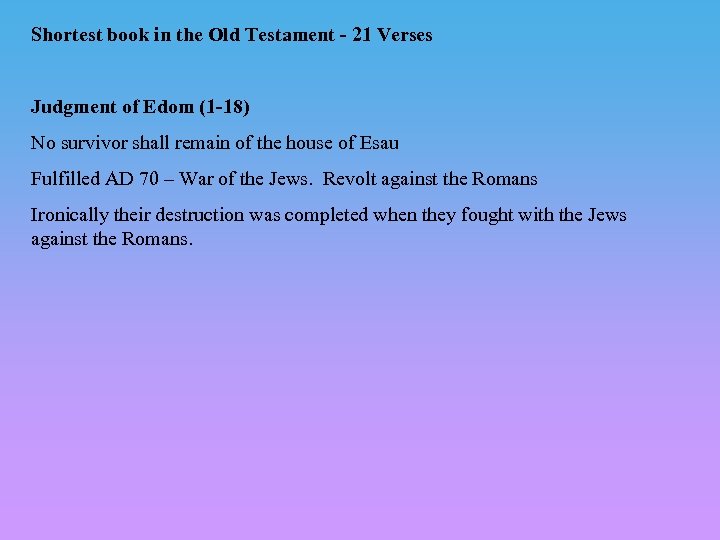 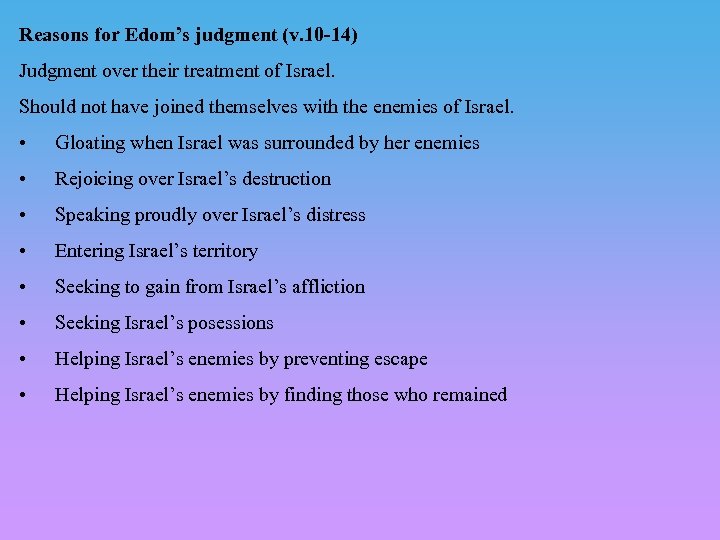 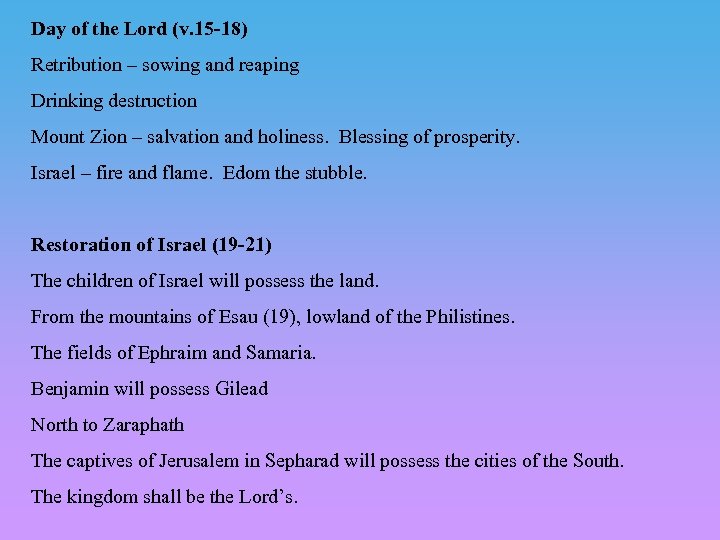 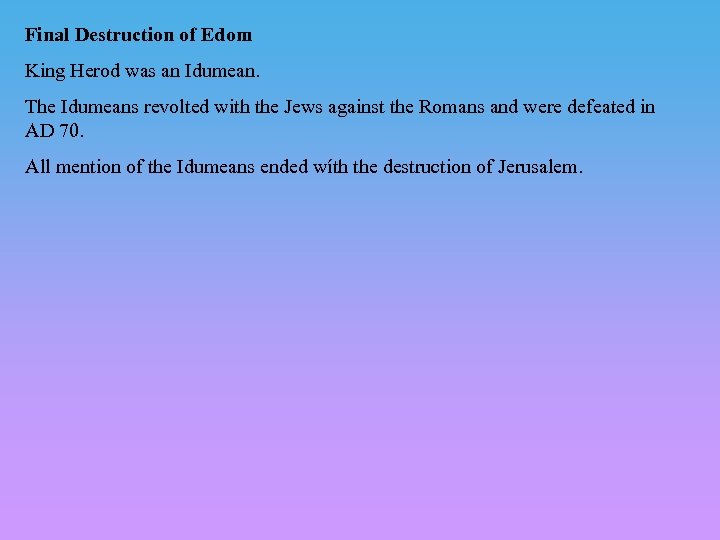 Obadiah (Worshipper of Jehovah) Probably lived in Judah Prophecy against Edom Theme The struggle between the descendants of Esau and Jacob. Edom and the Israelites Obadiah condemns Edom for refusing to help Israel They did not help Israel during the time of Moses (Numbers 20: 14 -21) Or in the time of invasion

Location of Edom Lamentations 4: 21 'Rejoice and be glad, O daughter of Edom, that dwellest in the land of Uz…' Edom was at the southern end of the Dead Sea.

Obadiah 3 ‘The pride of your heart has deceived you, you that dwells in the clefts of the rock, whose habitation is high; that says in his heart, Who shall bring me down to the ground? ’ Petra - Picture Wikipedia (Petra)

3. 790 BC King Jehoash of Israel invaded Judah (2 Kings 14, 2 Chr. 25) 4. Does not fit description – Israel and Judah were not strangers (Obadiah v. 11) 4. 586 BC Nebucchadnezzar of Babylon destroyed Jerusalem. 5. Not likely because Edom could not have helped Judah. 6. Jeremiah even told the Jews they should not defend themselves but go into captivity for 70 years. 7. The time of Obadiah must be during the reign of Jehoram (848 -841 BC) 8. Therefore Obadiah must have been written sometime after 848 BC. 9. Obadiah was therefore a contemporary of Elisha.

History of the Edomites Descendants of Esau – Edom means red. The name was associated with the red stew that Esau took from Jacob when he sold his birthright. Esau moved to the area called Seir where the Horites lived. Refused Israel passage on the way to the promised land. Opposed Saul. Overcome by David and ruled over by Solomon. Fought Jehoshaphat. Rebelled against Jehoram. Conquered by Amaziah. Idumea Broke from Judah in time of Ahaz. Controlled by Asyrians and Babylonians. Pushed out of Seir by Nabateans. Moved to Southern Israel and became known as Idumeans. Wikipedia - Edom

Shortest book in the Old Testament - 21 Verses Judgment of Edom (1 -18) No survivor shall remain of the house of Esau Fulfilled AD 70 – War of the Jews. Revolt against the Romans Ironically their destruction was completed when they fought with the Jews against the Romans.

Day of the Lord (v. 15 -18) Retribution – sowing and reaping Drinking destruction Mount Zion – salvation and holiness. Blessing of prosperity. Israel – fire and flame. Edom the stubble. Restoration of Israel (19 -21) The children of Israel will possess the land. From the mountains of Esau (19), lowland of the Philistines. The fields of Ephraim and Samaria. Benjamin will possess Gilead North to Zaraphath The captives of Jerusalem in Sepharad will possess the cities of the South. The kingdom shall be the Lord’s.

Final Destruction of Edom King Herod was an Idumean. The Idumeans revolted with the Jews against the Romans and were defeated in AD 70. All mention of the Idumeans ended wíth the destruction of Jerusalem.

SPEAKING TASK 1 Imagine that you are

Презентация chapter2 of the western civilization-2015-

Types of questions I am a pupil

What is Valentine’s day? Why do we celebrate

Simple Past vs. Present Perfect When