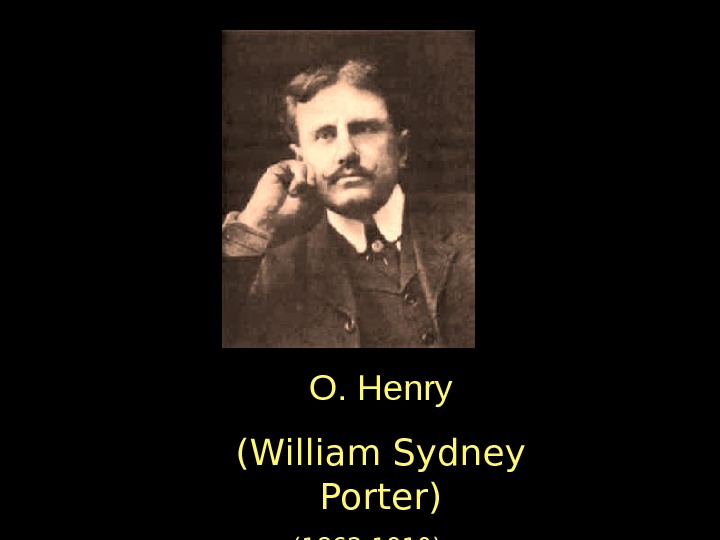 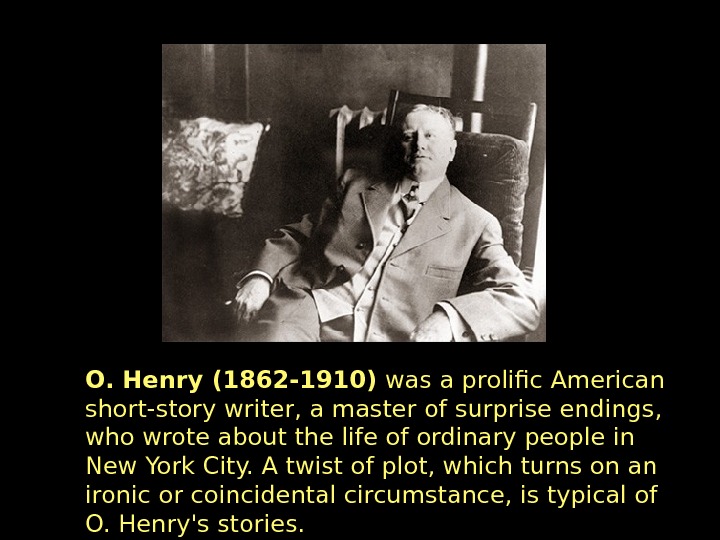 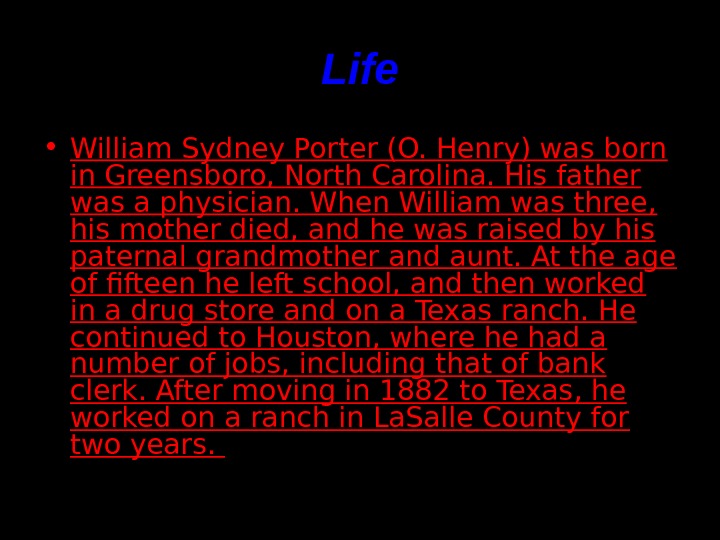 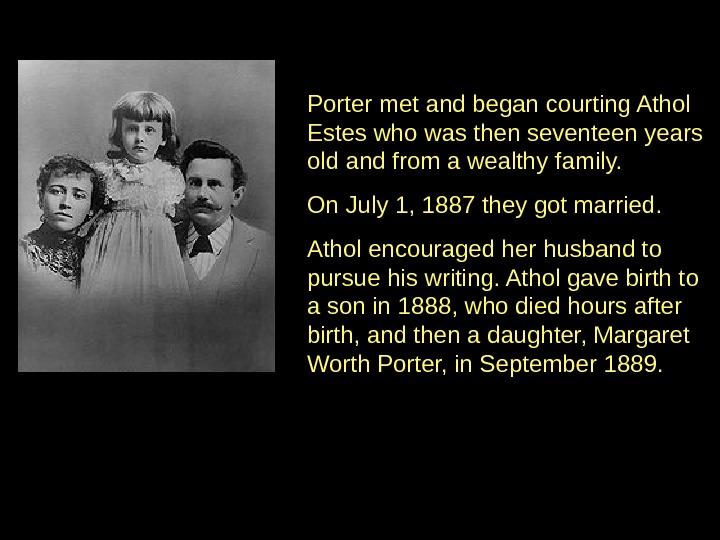 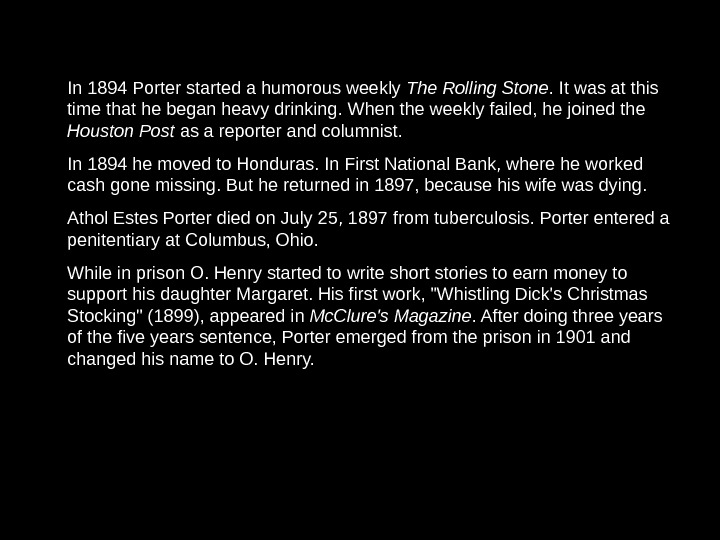 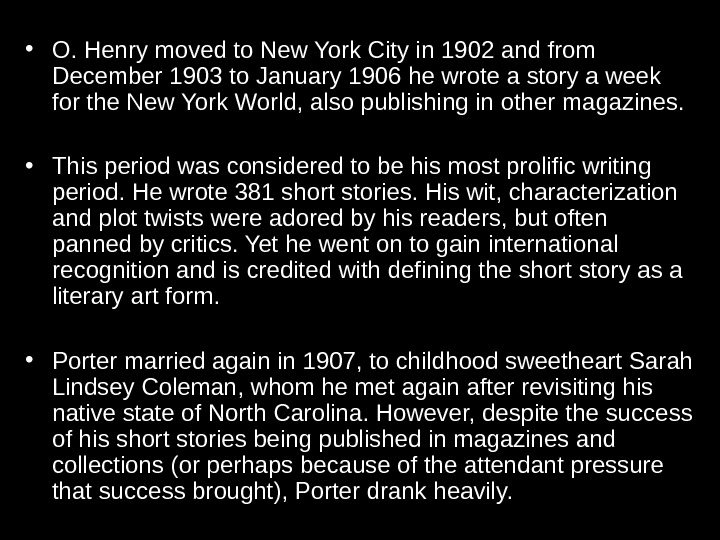 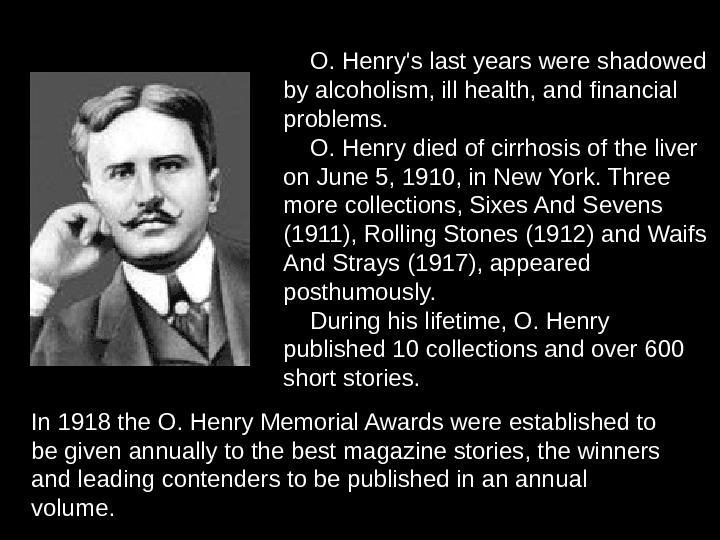 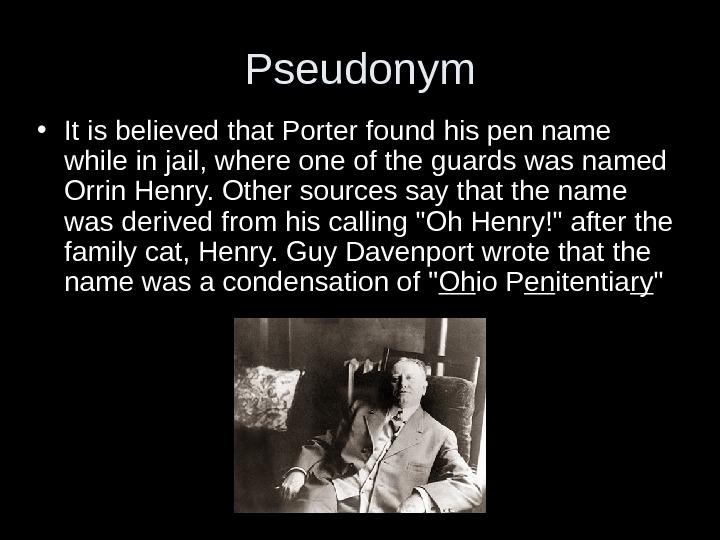 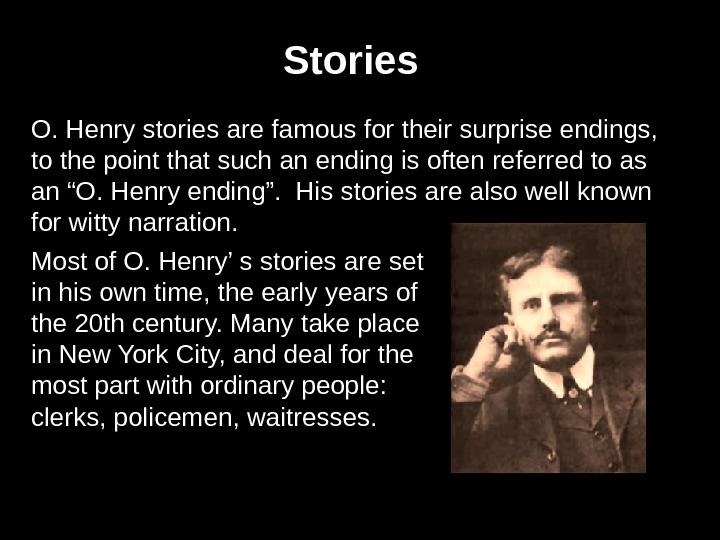 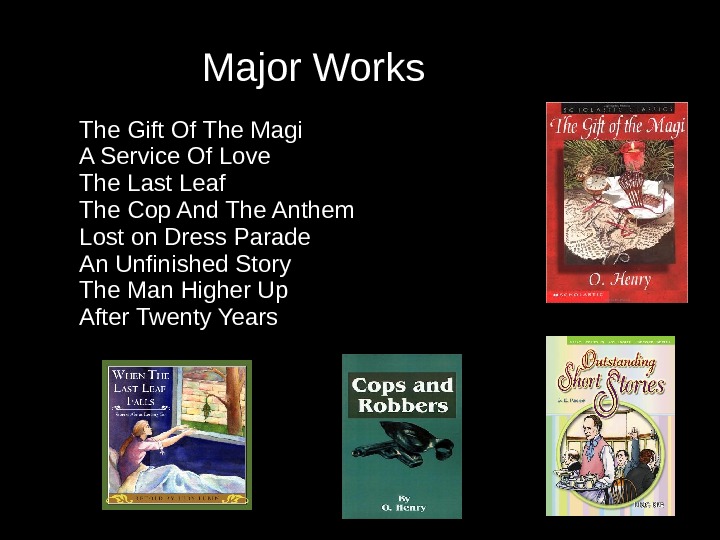 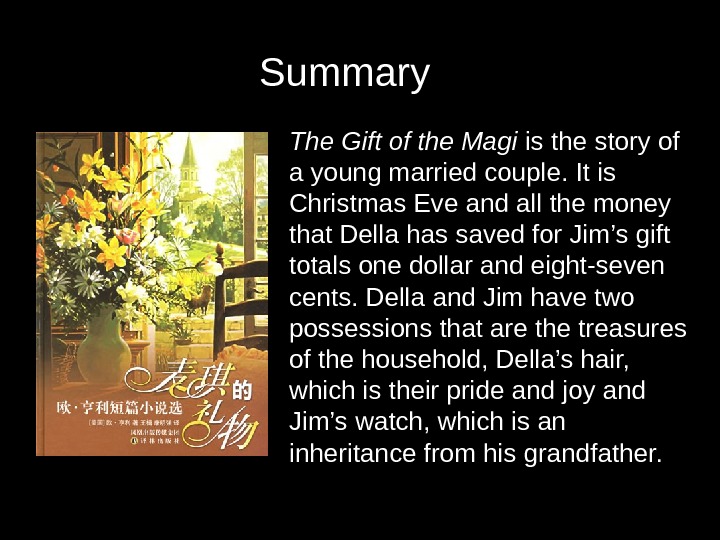 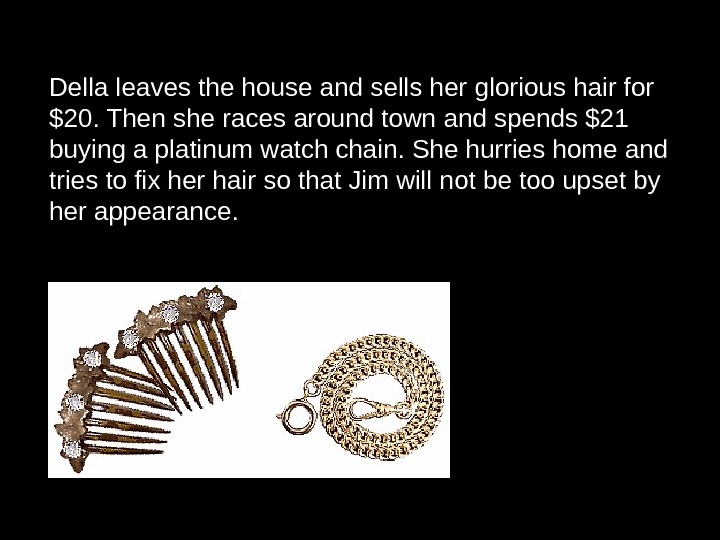 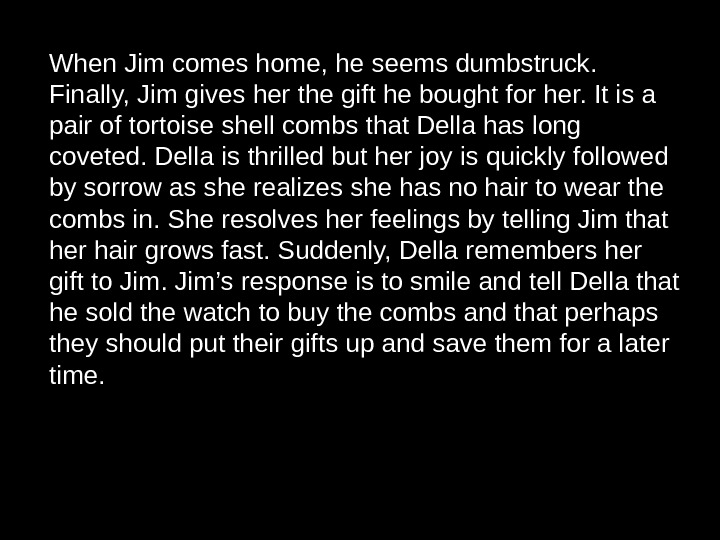 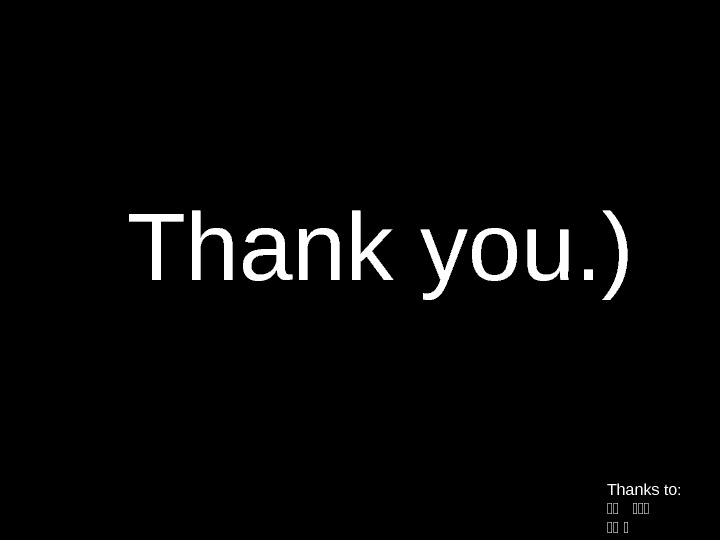 O. Henry (1862 -1910) was a prolific American short-story writer, a master of surprise endings, who wrote about the life of ordinary people in New York City. A twist of plot, which turns on an ironic or coincidental circumstance, is typical of O. Henry’s stories.

Life • William Sydney Porter (O. Henry) was born in Greensboro, North Carolina. His father was a physician. When William was three, his mother died, and he was raised by his paternal grandmother and aunt. At the age of fifteen he left school, and then worked in a drug store and on a Texas ranch. He continued to Houston, where he had a number of jobs, including that of bank clerk. After moving in 1882 to Texas, he worked on a ranch in La. Salle County for two years.

Porter met and began courting Athol Estes who was then seventeen years old and from a wealthy family. On July 1, 1887 they got married. Athol encouraged her husband to pursue his writing. Athol gave birth to a son in 1888, who died hours after birth, and then a daughter, Margaret Worth Porter, in September 1889.

In 1894 Porter started a humorous weekly The Rolling Stone. It was at this time that he began heavy drinking. When the weekly failed, he joined the Houston Post as a reporter and columnist. In 1894 he moved to Honduras. In First National Bank, where he worked cash gone missing. But he returned in 1897, because his wife was dying. Athol Estes Porter died on July 25, 1897 from tuberculosis. Porter entered a penitentiary at Columbus, Ohio. While in prison O. Henry started to write short stories to earn money to support his daughter Margaret. His first work, «Whistling Dick’s Christmas Stocking» (1899), appeared in Mc. Clure’s Magazine. After doing three years of the five years sentence, Porter emerged from the prison in 1901 and changed his name to O. Henry.

• O. Henry moved to New York City in 1902 and from December 1903 to January 1906 he wrote a story a week for the New York World, also publishing in other magazines. • This period was considered to be his most prolific writing period. He wrote 381 short stories. His wit, characterization and plot twists were adored by his readers, but often panned by critics. Yet he went on to gain international recognition and is credited with defining the short story as a literary art form. • Porter married again in 1907, to childhood sweetheart Sarah Lindsey Coleman, whom he met again after revisiting his native state of North Carolina. However, despite the success of his short stories being published in magazines and collections (or perhaps because of the attendant pressure that success brought), Porter drank heavily.

O. Henry’s last years were shadowed by alcoholism, ill health, and financial problems. O. Henry died of cirrhosis of the liver on June 5, 1910, in New York. Three more collections, Sixes And Sevens (1911), Rolling Stones (1912) and Waifs And Strays (1917), appeared posthumously. During his lifetime, O. Henry published 10 collections and over 600 short stories. In 1918 the O. Henry Memorial Awards were established to be given annually to the best magazine stories, the winners and leading contenders to be published in an annual volume.

Pseudonym • It is believed that Porter found his pen name while in jail, where one of the guards was named Orrin Henry. Other sources say that the name was derived from his calling «Oh Henry!» after the family cat, Henry. Guy Davenport wrote that the name was a condensation of » Oh io P en itentia ry «

O. Henry stories are famous for their surprise endings, to the point that such an ending is often referred to as an “O. Henry ending”. His stories are also well known for witty narration. Stories Most of O. Henry’ s stories are set in his own time, the early years of the 20 th century. Many take place in New York City, and deal for the most part with ordinary people: clerks, policemen, waitresses.

The Gift of the Magi is the story of a young married couple. It is Christmas Eve and all the money that Della has saved for Jim’s gift totals one dollar and eight-seven cents. Della and Jim have two possessions that are the treasures of the household, Della’s hair, which is their pride and joy and Jim’s watch, which is an inheritance from his grandfather. Summary

Della leaves the house and sells her glorious hair for $20. Then she races around town and spends $21 buying a platinum watch chain. She hurries home and tries to fix her hair so that Jim will not be too upset by her appearance.

When Jim comes home, he seems dumbstruck. Finally, Jim gives her the gift he bought for her. It is a pair of tortoise shell combs that Della has long coveted. Della is thrilled but her joy is quickly followed by sorrow as she realizes she has no hair to wear the combs in. She resolves her feelings by telling Jim that her hair grows fast. Suddenly, Della remembers her gift to Jim’s response is to smile and tell Della that he sold the watch to buy the combs and that perhaps they should put their gifts up and save them for a later time.

Themes Love , generosity , and the various definitions of wealth and poverty are central themes in “The Gift of the Magi”.