NOTE The message this presentation conveys is a 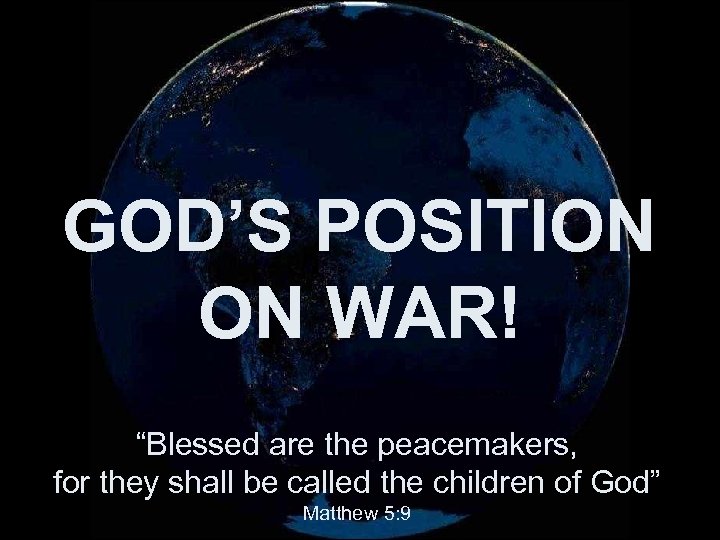 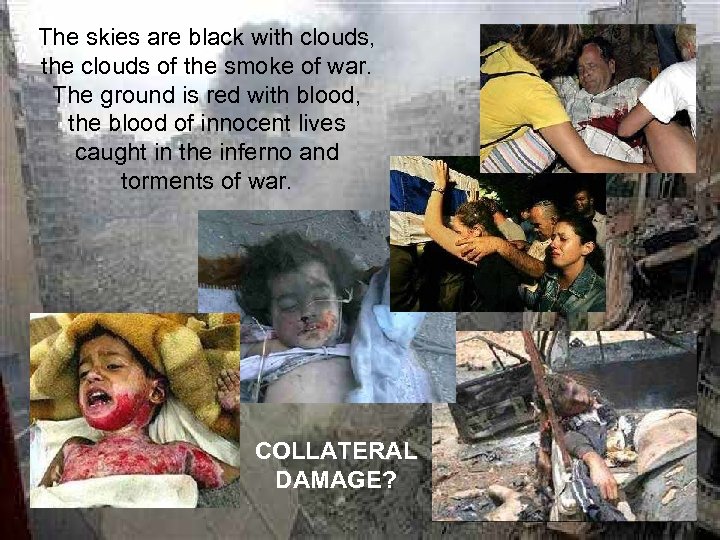 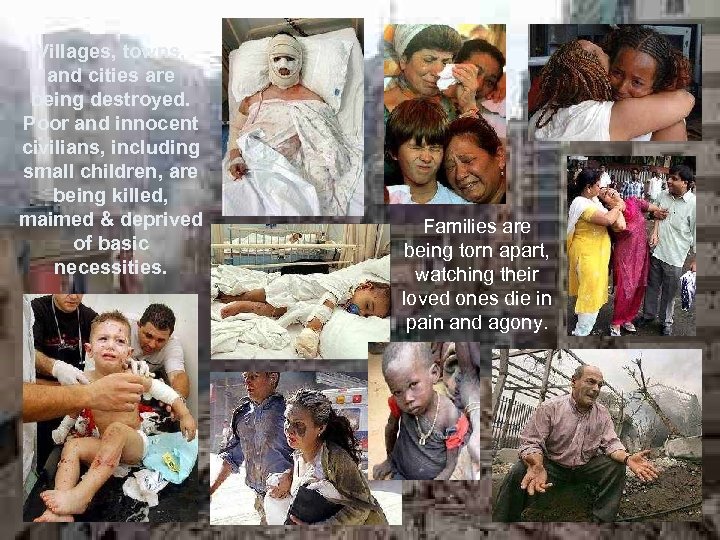 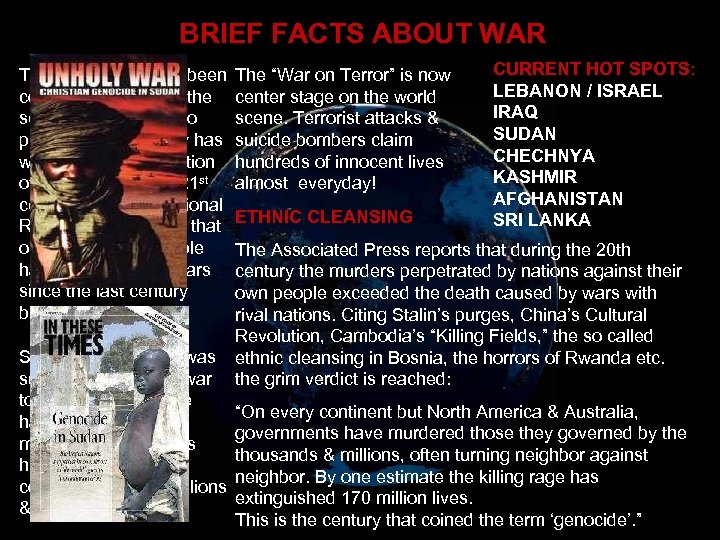 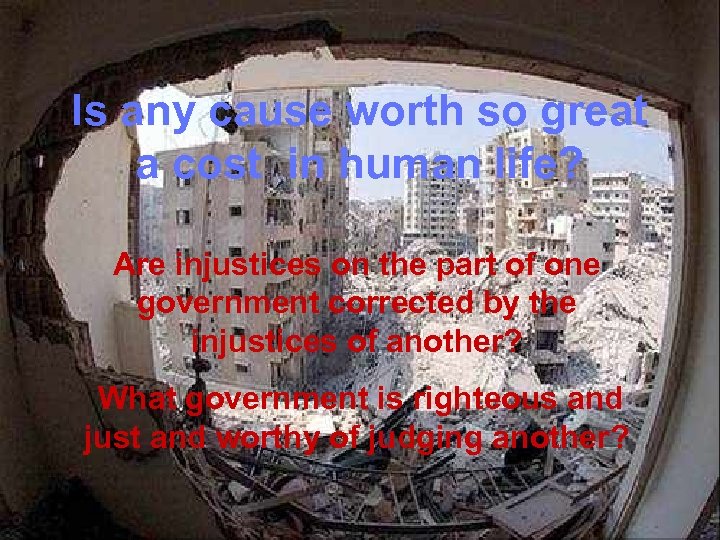 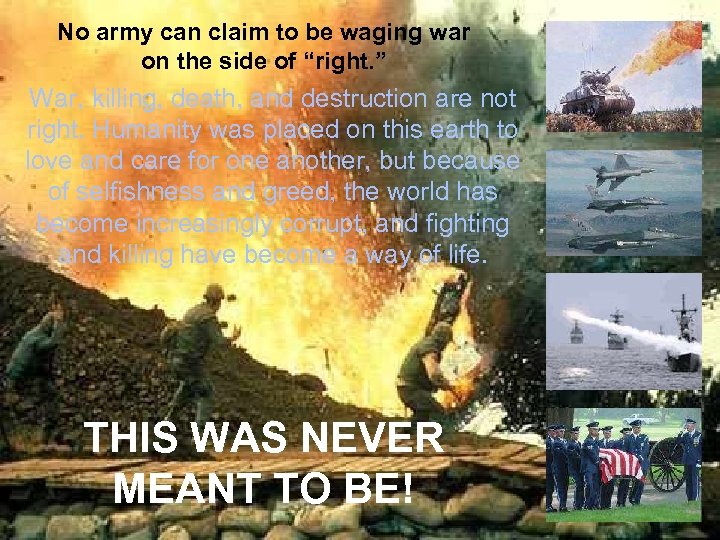 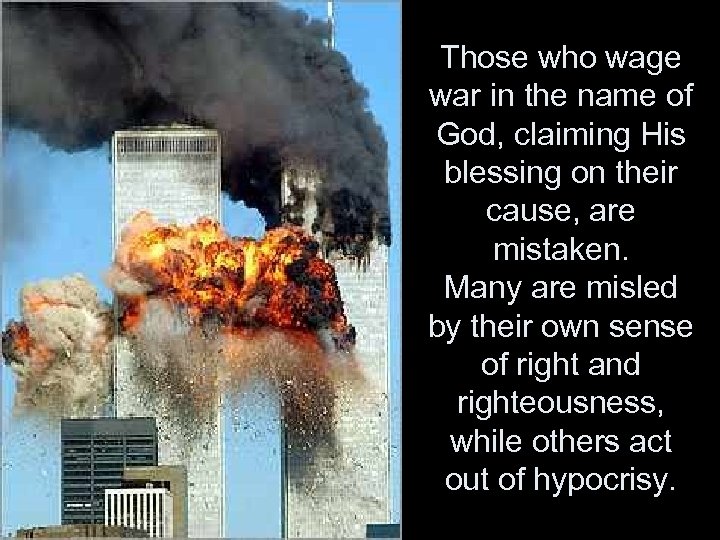 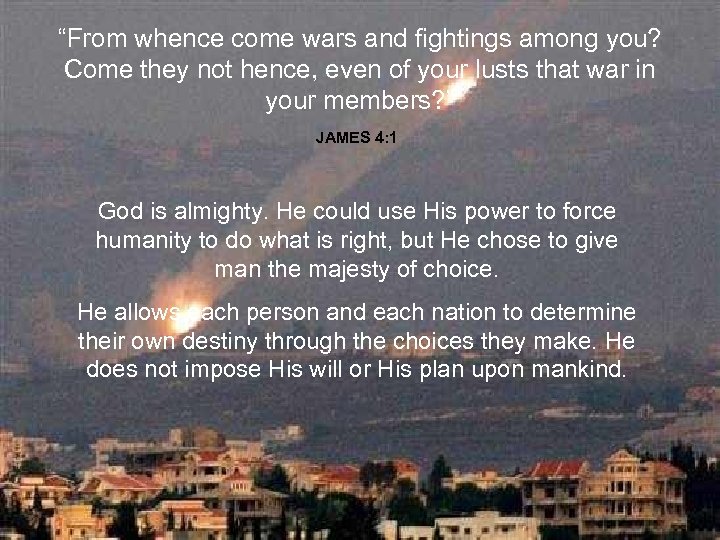 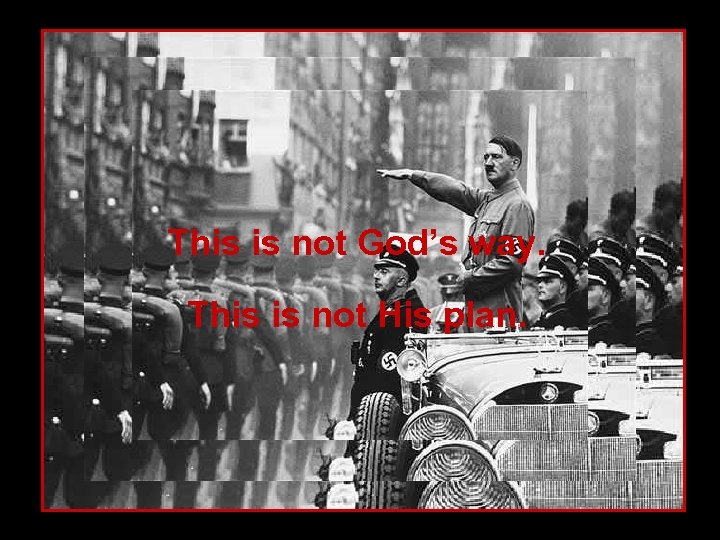 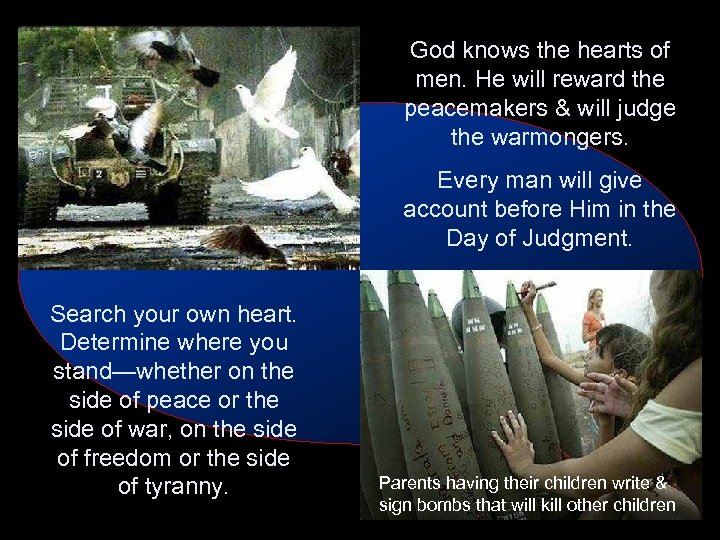 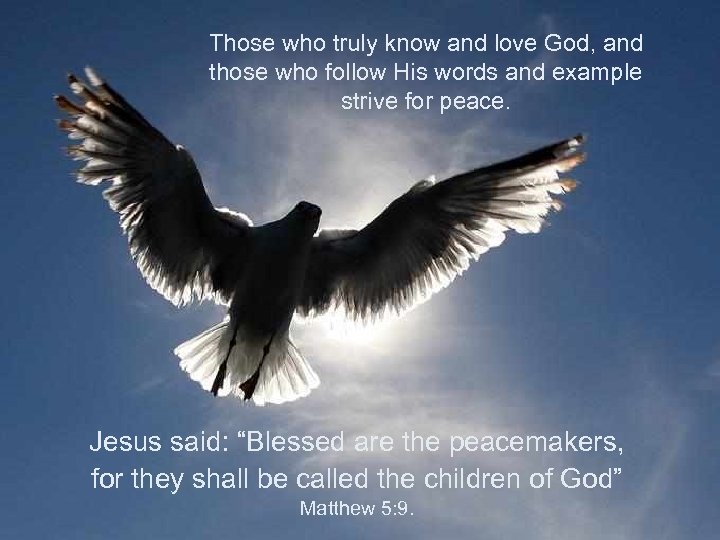 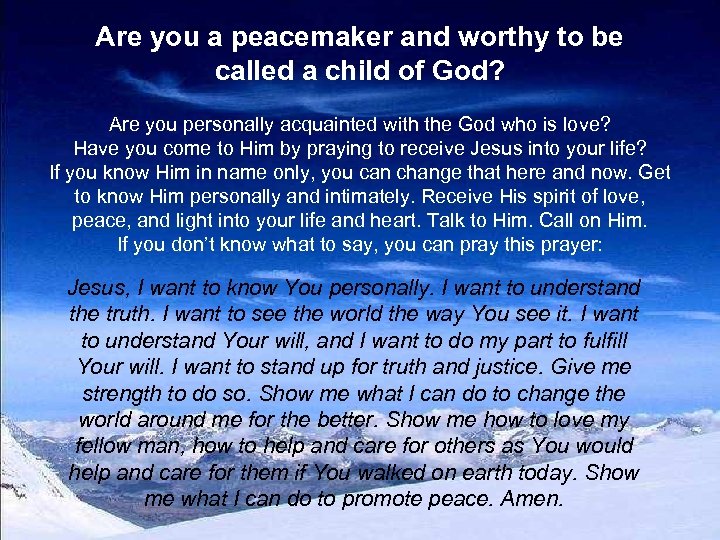 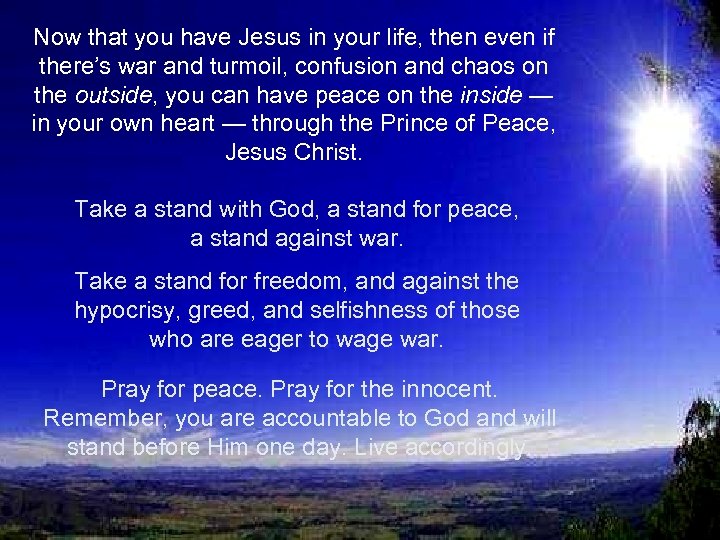 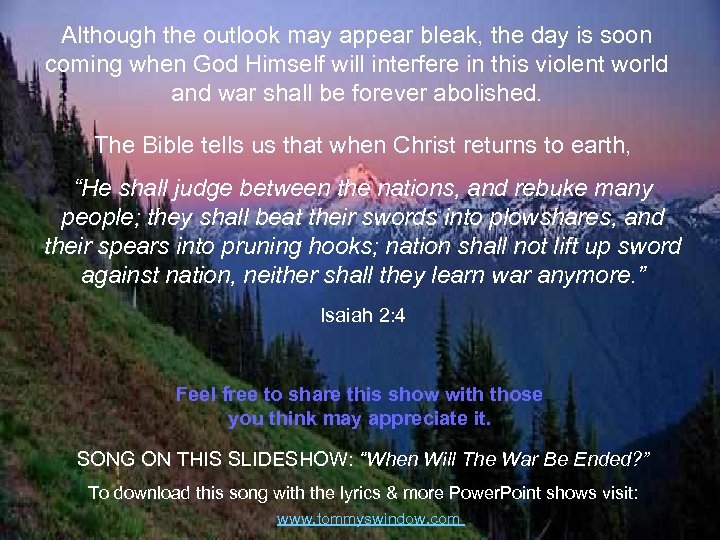 Скачать презентацию NOTE The message this presentation conveys is a

NOTE: The message this presentation conveys is a general view of the scourge of all wars & the suffering that it brings. We want to remind you that hundreds die every day in many parts of the world as the result of wars, suicide bombers & collateral damage, though the main focus is on Israel & Lebanon at this time. GOD’S POSITION ON WAR! The pictures we use to illustrate this slide show are from a variety of scenarios of places in recent history, not just from one particular place. Our prayer is for world peace. This will become reality when the Prince of Peace physically establishes His Kingdom on Earth. You can have His Kingdom and His peace within you right now. ♫ Turn on your speakers! “Blessed are the peacemakers, CLICK TO ADVANCE SLIDES for they shall be called the children of God” Matthew 5: 9

The skies are black with clouds, the clouds of the smoke of war. The ground is red with blood, the blood of innocent lives caught in the inferno and torments of war. COLLATERAL DAMAGE?

Villages, towns, and cities are being destroyed. Poor and innocent civilians, including small children, are being killed, maimed & deprived of basic necessities. Families are being torn apart, watching their loved ones die in pain and agony.

BRIEF FACTS ABOUT WAR The world has never been completely free from the scourge of war, but no period in all of history has witnessed the escalation of war as the 20 th & 21 st century. The International Red Cross estimates that over 100 million people have been killed in wars since the last century began. Since WW 2, which was supposed to be “the war to end all wars, ” there have been over 150 major wars, as well as hundreds of smaller conflicts, armed rebellions & revolutions. The “War on Terror” is now center stage on the world scene. Terrorist attacks & suicide bombers claim hundreds of innocent lives almost everyday! ETHNIC CLEANSING CURRENT HOT SPOTS: LEBANON / ISRAEL IRAQ SUDAN CHECHNYA KASHMIR AFGHANISTAN SRI LANKA The Associated Press reports that during the 20 th century the murders perpetrated by nations against their own people exceeded the death caused by wars with rival nations. Citing Stalin’s purges, China’s Cultural Revolution, Cambodia’s “Killing Fields, ” the so called ethnic cleansing in Bosnia, the horrors of Rwanda etc. the grim verdict is reached: “On every continent but North America & Australia, governments have murdered those they governed by the thousands & millions, often turning neighbor against neighbor. By one estimate the killing rage has extinguished 170 million lives. This is the century that coined the term ‘genocide’. ”

Is any cause worth so great a cost in human life? Are injustices on the part of one government corrected by the injustices of another? What government is righteous and just and worthy of judging another?

No army can claim to be waging war on the side of “right. ” War, killing, death, and destruction are not right. Humanity was placed on this earth to love and care for one another, but because of selfishness and greed, the world has become increasingly corrupt, and fighting and killing have become a way of life. THIS WAS NEVER MEANT TO BE!

Those who wage war in the name of God, claiming His blessing on their cause, are mistaken. Many are misled by their own sense of right and righteousness, while others act out of hypocrisy.

“From whence come wars and fightings among you? Come they not hence, even of your lusts that war in your members? ” JAMES 4: 1 God is almighty. He could use His power to force humanity to do what is right, but He chose to give man the majesty of choice. He allows each person and each nation to determine their own destiny through the choices they make. He does not impose His will or His plan upon mankind.

How much less should mere mortals impose their will and plan upon others? People should never This is not their beliefs or way force others to conform to. God’s way. of life. One government should never force another to This is not ideals and desires. operate according to its. His plan.

God knows the hearts of men. He will reward the peacemakers & will judge the warmongers. Every man will give account before Him in the Day of Judgment. Search your own heart. Determine where you stand—whether on the side of peace or the side of war, on the side of freedom or the side of tyranny. Parents having their children write & sign bombs that will kill other children

Those who truly know and love God, and those who follow His words and example strive for peace. Jesus said: “Blessed are the peacemakers, for they shall be called the children of God” Matthew 5: 9.

Are you a peacemaker and worthy to be called a child of God? Are you personally acquainted with the God who is love? Have you come to Him by praying to receive Jesus into your life? If you know Him in name only, you can change that here and now. Get to know Him personally and intimately. Receive His spirit of love, peace, and light into your life and heart. Talk to Him. Call on Him. If you don’t know what to say, you can pray this prayer: Jesus, I want to know You personally. I want to understand the truth. I want to see the world the way You see it. I want to understand Your will, and I want to do my part to fulfill Your will. I want to stand up for truth and justice. Give me strength to do so. Show me what I can do to change the world around me for the better. Show me how to love my fellow man, how to help and care for others as You would help and care for them if You walked on earth today. Show me what I can do to promote peace. Amen.

Now that you have Jesus in your life, then even if there’s war and turmoil, confusion and chaos on the outside, you can have peace on the inside — in your own heart — through the Prince of Peace, Jesus Christ. Take a stand with God, a stand for peace, a stand against war. Take a stand for freedom, and against the hypocrisy, greed, and selfishness of those who are eager to wage war. Pray for peace. Pray for the innocent. Remember, you are accountable to God and will stand before Him one day. Live accordingly.

Although the outlook may appear bleak, the day is soon coming when God Himself will interfere in this violent world and war shall be forever abolished. The Bible tells us that when Christ returns to earth, “He shall judge between the nations, and rebuke many people; they shall beat their swords into plowshares, and their spears into pruning hooks; nation shall not lift up sword against nation, neither shall they learn war anymore. ” Isaiah 2: 4 Feel free to share this show with those you think may appreciate it. SONG ON THIS SLIDESHOW: “When Will The War Be Ended? ” To download this song with the lyrics & more Power. Point shows visit: www. tommyswindow. com