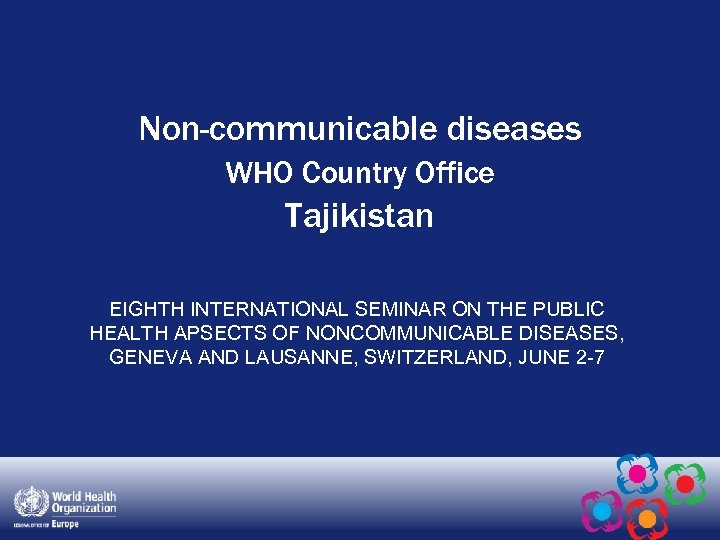 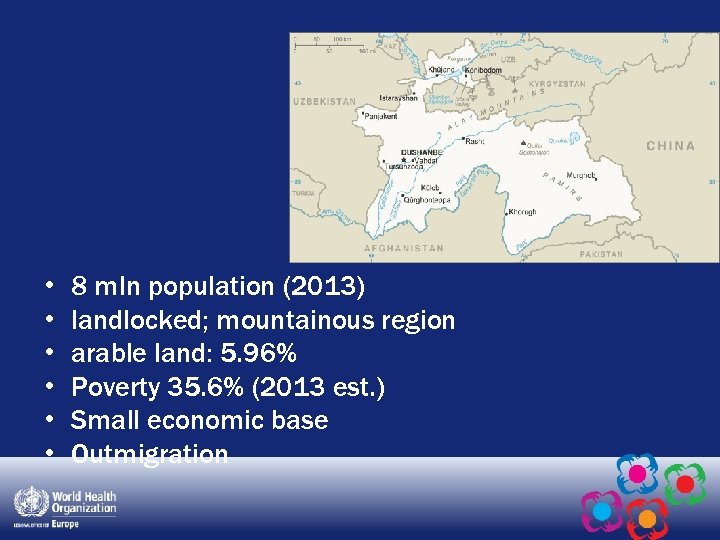 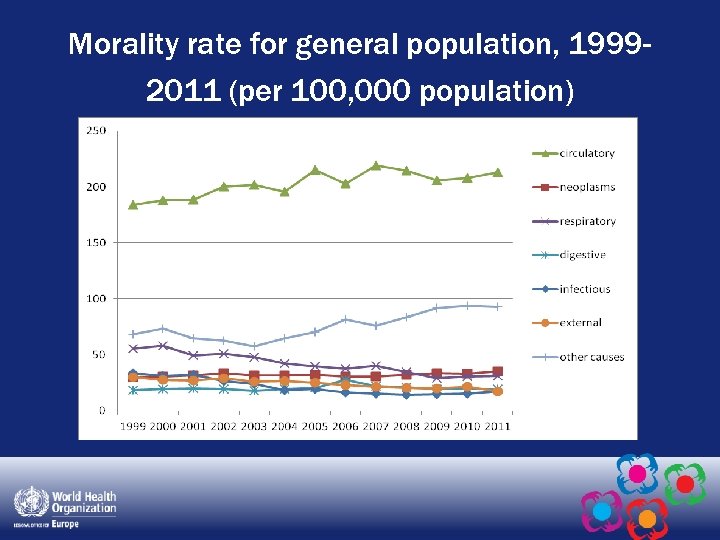 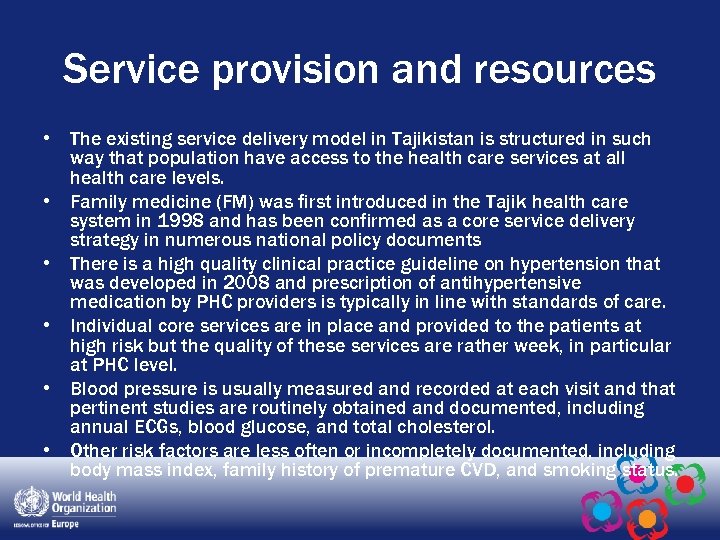 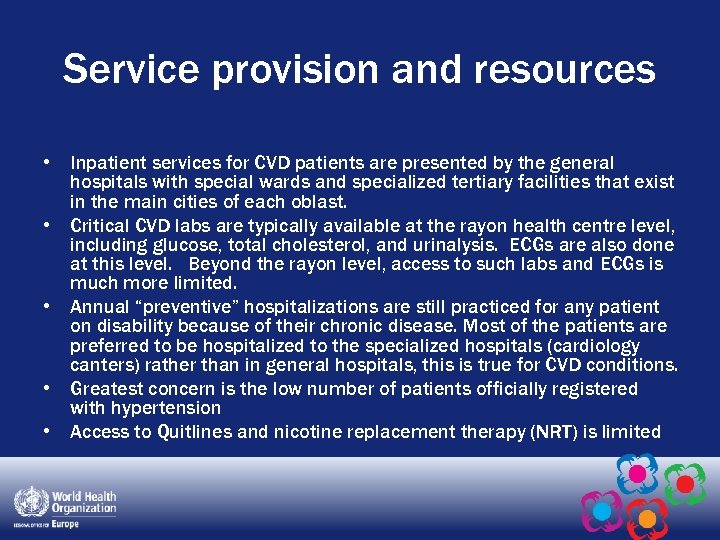 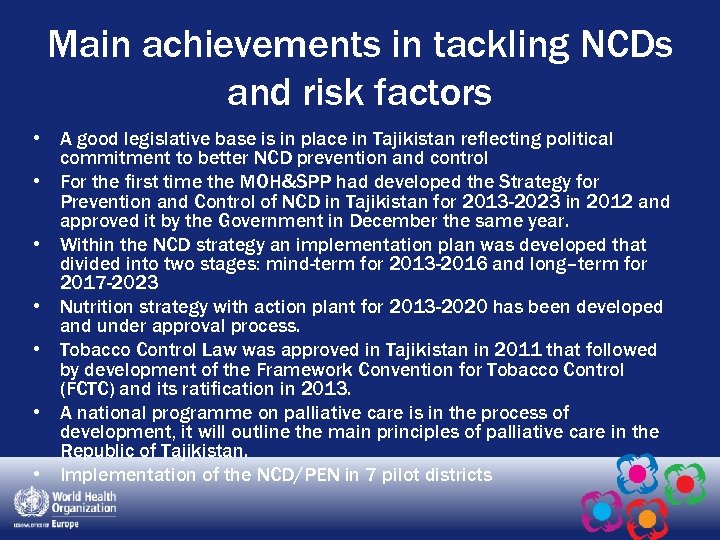 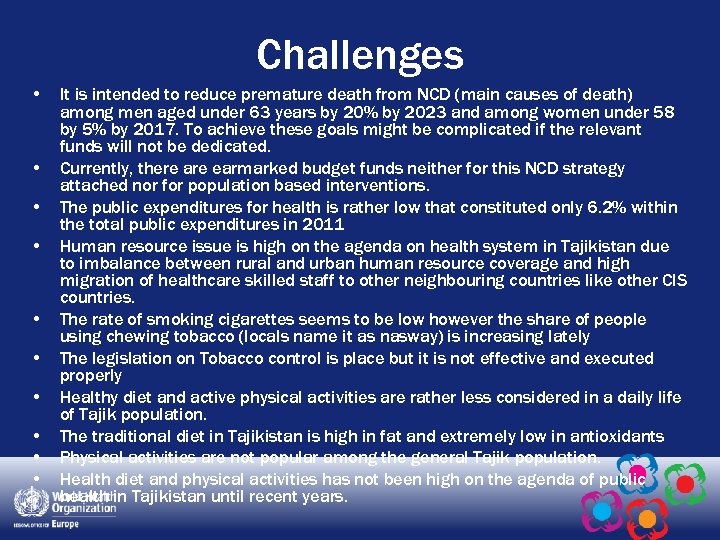 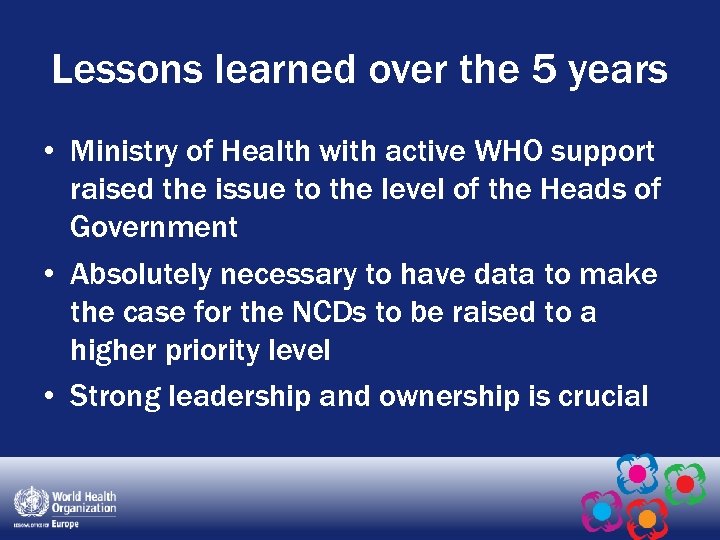 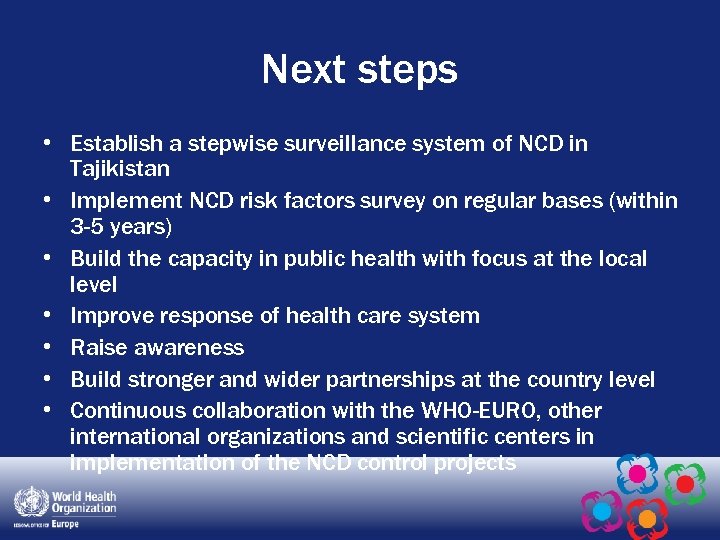 Service provision and resources • The existing service delivery model in Tajikistan is structured in such way that population have access to the health care services at all health care levels. • Family medicine (FM) was first introduced in the Tajik health care system in 1998 and has been confirmed as a core service delivery strategy in numerous national policy documents • There is a high quality clinical practice guideline on hypertension that was developed in 2008 and prescription of antihypertensive medication by PHC providers is typically in line with standards of care. • Individual core services are in place and provided to the patients at high risk but the quality of these services are rather week, in particular at PHC level. • Blood pressure is usually measured and recorded at each visit and that pertinent studies are routinely obtained and documented, including annual ECGs, blood glucose, and total cholesterol. • Other risk factors are less often or incompletely documented, including body mass index, family history of premature CVD, and smoking status.

Service provision and resources • Inpatient services for CVD patients are presented by the general hospitals with special wards and specialized tertiary facilities that exist in the main cities of each oblast. • Critical CVD labs are typically available at the rayon health centre level, including glucose, total cholesterol, and urinalysis. ECGs are also done at this level. Beyond the rayon level, access to such labs and ECGs is much more limited. • Annual “preventive” hospitalizations are still practiced for any patient on disability because of their chronic disease. Most of the patients are preferred to be hospitalized to the specialized hospitals (cardiology canters) rather than in general hospitals, this is true for CVD conditions. • Greatest concern is the low number of patients officially registered with hypertension • Access to Quitlines and nicotine replacement therapy (NRT) is limited

Main achievements in tackling NCDs and risk factors • A good legislative base is in place in Tajikistan reflecting political commitment to better NCD prevention and control • For the first time the MOH&SPP had developed the Strategy for Prevention and Control of NCD in Tajikistan for 2013 -2023 in 2012 and approved it by the Government in December the same year. • Within the NCD strategy an implementation plan was developed that divided into two stages: mind-term for 2013 -2016 and long–term for 2017 -2023 • Nutrition strategy with action plant for 2013 -2020 has been developed and under approval process. • Tobacco Control Law was approved in Tajikistan in 2011 that followed by development of the Framework Convention for Tobacco Control (FCTC) and its ratification in 2013. • A national programme on palliative care is in the process of development, it will outline the main principles of palliative care in the Republic of Tajikistan. • Implementation of the NCD/PEN in 7 pilot districts

Challenges • • • It is intended to reduce premature death from NCD (main causes of death) among men aged under 63 years by 20% by 2023 and among women under 58 by 5% by 2017. To achieve these goals might be complicated if the relevant funds will not be dedicated. Currently, there are earmarked budget funds neither for this NCD strategy attached nor for population based interventions. The public expenditures for health is rather low that constituted only 6. 2% within the total public expenditures in 2011 Human resource issue is high on the agenda on health system in Tajikistan due to imbalance between rural and urban human resource coverage and high migration of healthcare skilled staff to other neighbouring countries like other CIS countries. The rate of smoking cigarettes seems to be low however the share of people using chewing tobacco (locals name it as nasway) is increasing lately The legislation on Tobacco control is place but it is not effective and executed properly Healthy diet and active physical activities are rather less considered in a daily life of Tajik population. The traditional diet in Tajikistan is high in fat and extremely low in antioxidants Physical activities are not popular among the general Tajik population. Health diet and physical activities has not been high on the agenda of public health in Tajikistan until recent years.

Next steps • Establish a stepwise surveillance system of NCD in Tajikistan • Implement NCD risk factors survey on regular bases (within 3 -5 years) • Build the capacity in public health with focus at the local level • Improve response of health care system • Raise awareness • Build stronger and wider partnerships at the country level • Continuous collaboration with the WHO-EURO, other international organizations and scientific centers in implementation of the NCD control projects