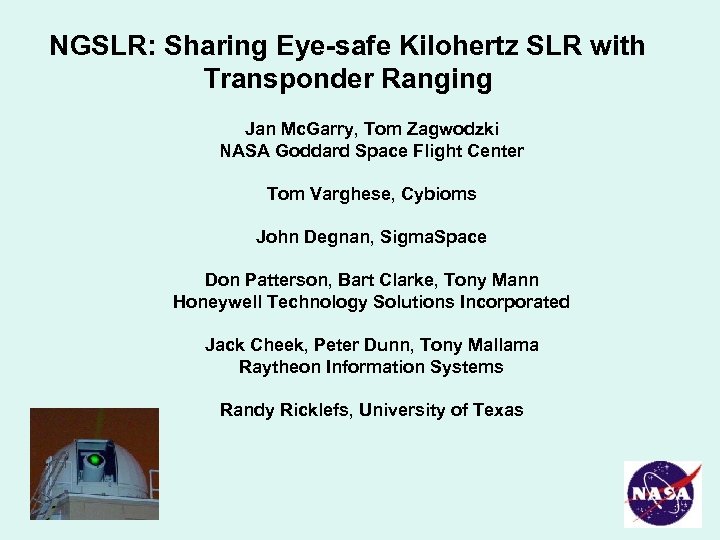 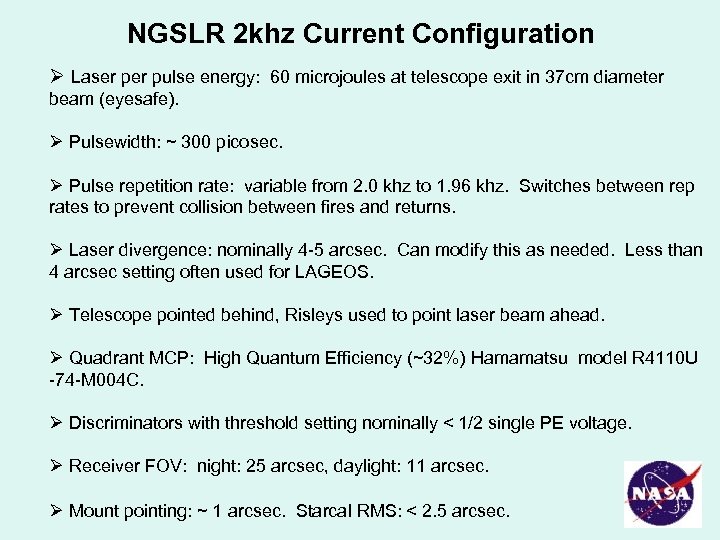 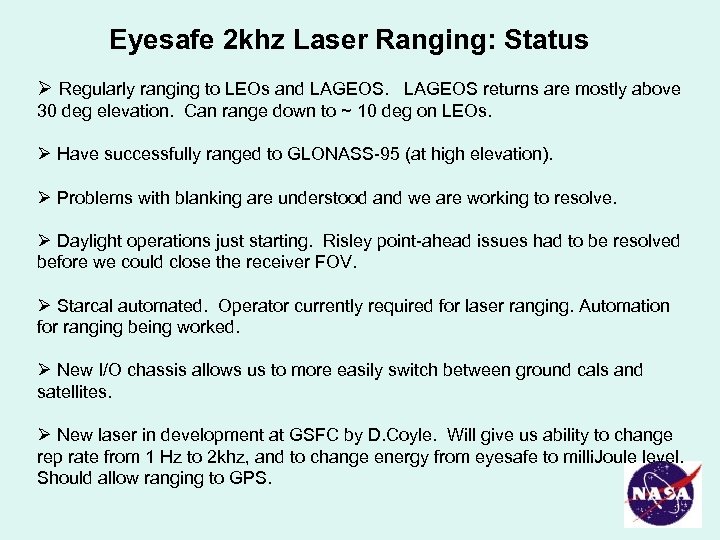 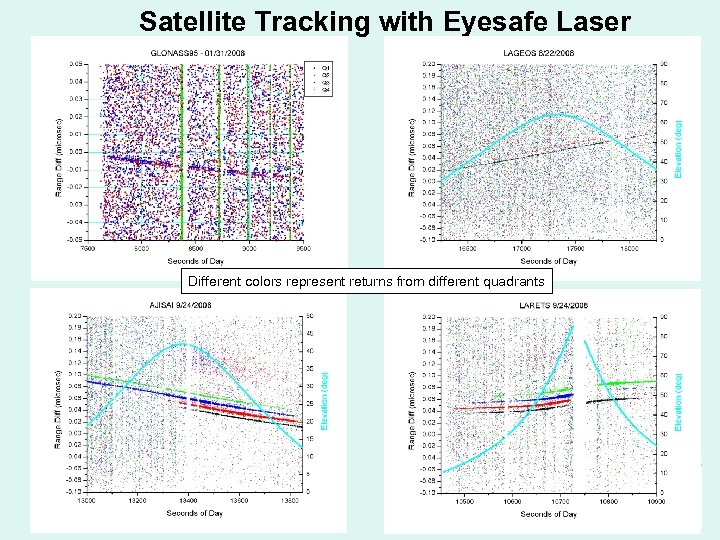 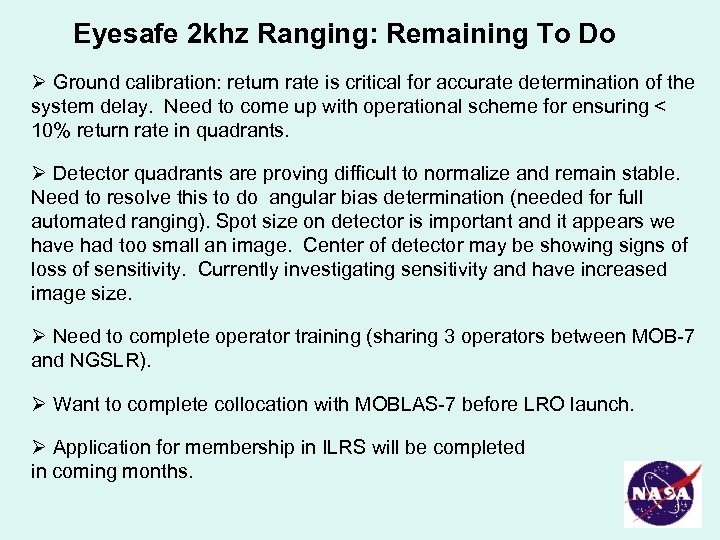 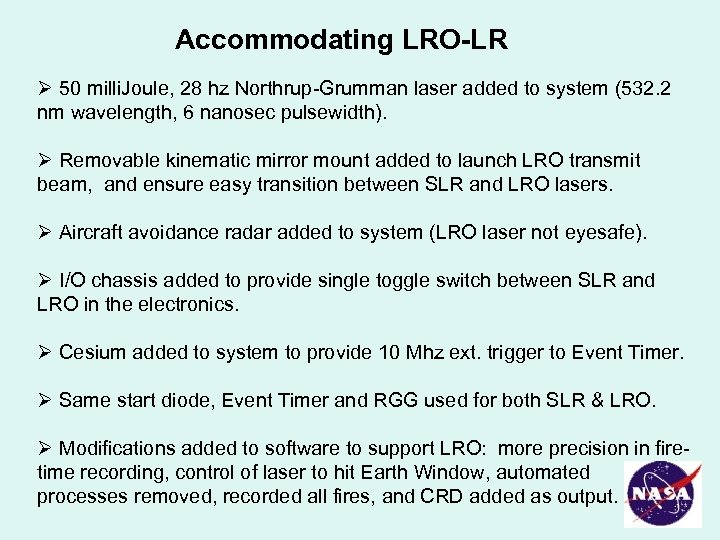 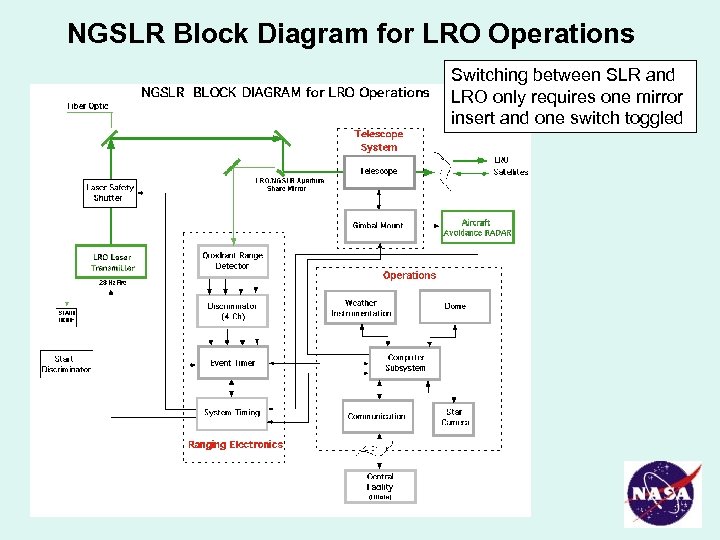 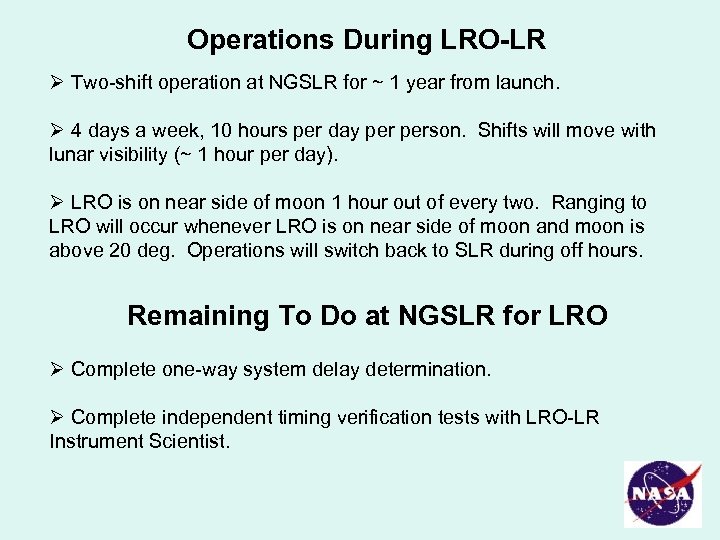 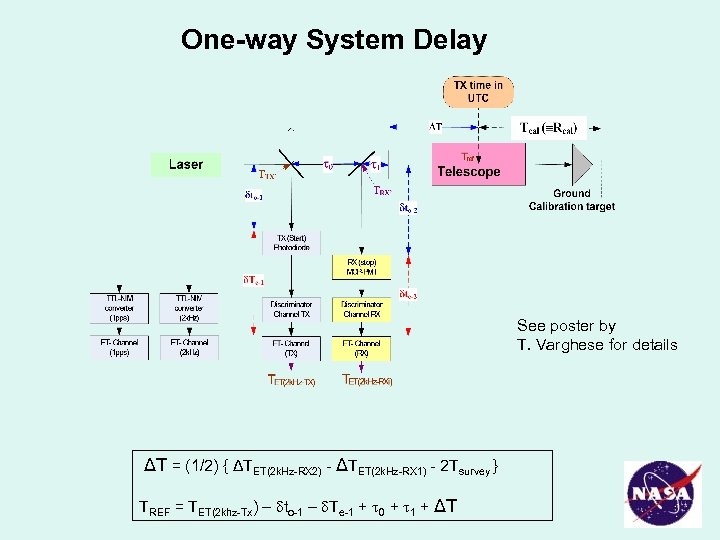 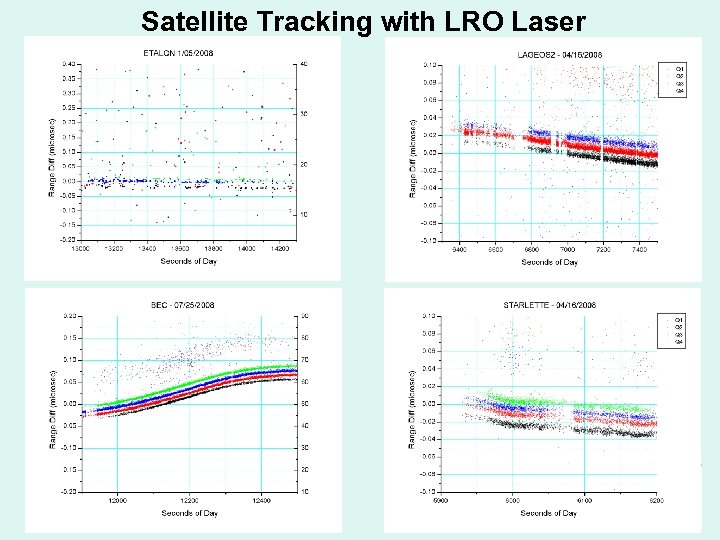 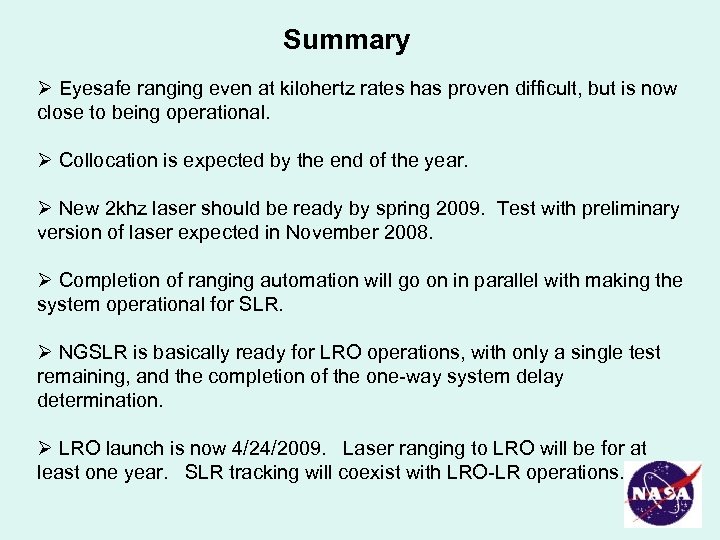 Eyesafe 2 khz Laser Ranging: Status Ø Regularly ranging to LEOs and LAGEOS returns are mostly above 30 deg elevation. Can range down to ~ 10 deg on LEOs. Ø Have successfully ranged to GLONASS-95 (at high elevation). Ø Problems with blanking are understood and we are working to resolve. Ø Daylight operations just starting. Risley point-ahead issues had to be resolved before we could close the receiver FOV. Ø Starcal automated. Operator currently required for laser ranging. Automation for ranging being worked. Ø New I/O chassis allows us to more easily switch between ground cals and satellites. Ø New laser in development at GSFC by D. Coyle. Will give us ability to change rep rate from 1 Hz to 2 khz, and to change energy from eyesafe to milli. Joule level. Should allow ranging to GPS.

Eyesafe 2 khz Ranging: Remaining To Do Ø Ground calibration: return rate is critical for accurate determination of the system delay. Need to come up with operational scheme for ensuring < 10% return rate in quadrants. Ø Detector quadrants are proving difficult to normalize and remain stable. Need to resolve this to do angular bias determination (needed for full automated ranging). Spot size on detector is important and it appears we have had too small an image. Center of detector may be showing signs of loss of sensitivity. Currently investigating sensitivity and have increased image size. Ø Need to complete operator training (sharing 3 operators between MOB-7 and NGSLR). Ø Want to complete collocation with MOBLAS-7 before LRO launch. Ø Application for membership in ILRS will be completed in coming months.

Operations During LRO-LR Ø Two-shift operation at NGSLR for ~ 1 year from launch. Ø 4 days a week, 10 hours per day person. Shifts will move with lunar visibility (~ 1 hour per day). Ø LRO is on near side of moon 1 hour out of every two. Ranging to LRO will occur whenever LRO is on near side of moon and moon is above 20 deg. Operations will switch back to SLR during off hours. Remaining To Do at NGSLR for LRO Ø Complete one-way system delay determination. Ø Complete independent timing verification tests with LRO-LR Instrument Scientist.

Summary Ø Eyesafe ranging even at kilohertz rates has proven difficult, but is now close to being operational. Ø Collocation is expected by the end of the year. Ø New 2 khz laser should be ready by spring 2009. Test with preliminary version of laser expected in November 2008. Ø Completion of ranging automation will go on in parallel with making the system operational for SLR. Ø NGSLR is basically ready for LRO operations, with only a single test remaining, and the completion of the one-way system delay determination. Ø LRO launch is now 4/24/2009. Laser ranging to LRO will be for at least one year. SLR tracking will coexist with LRO-LR operations.