Newsletter Spring 2011 in This issue greetings from 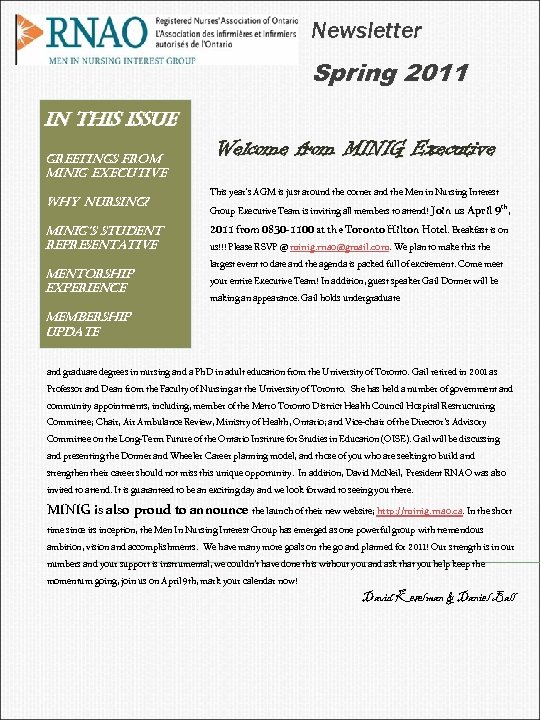 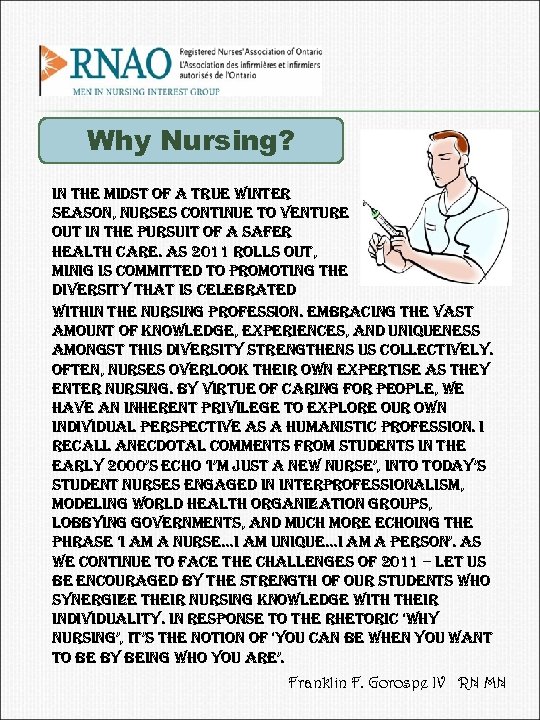 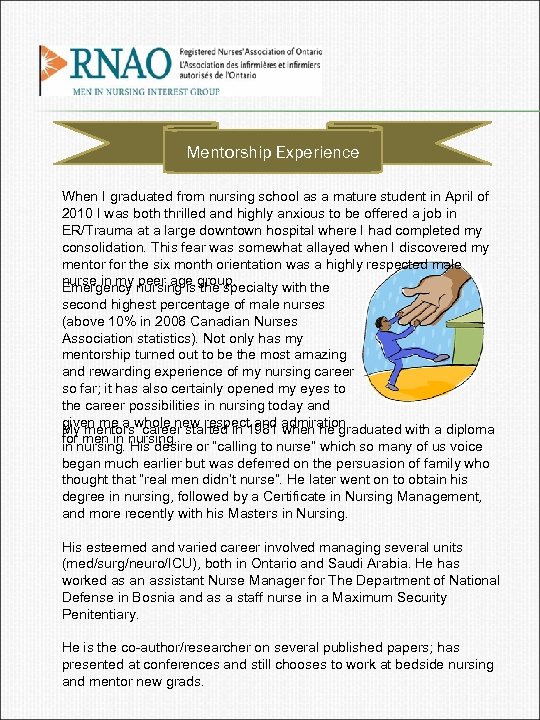 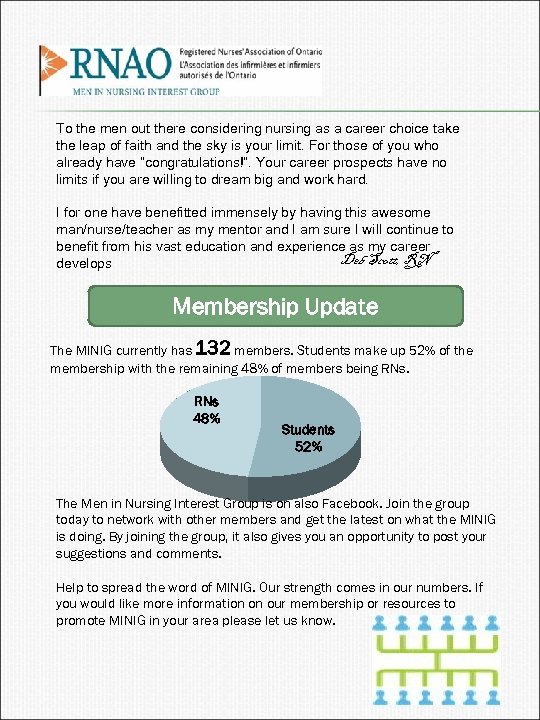 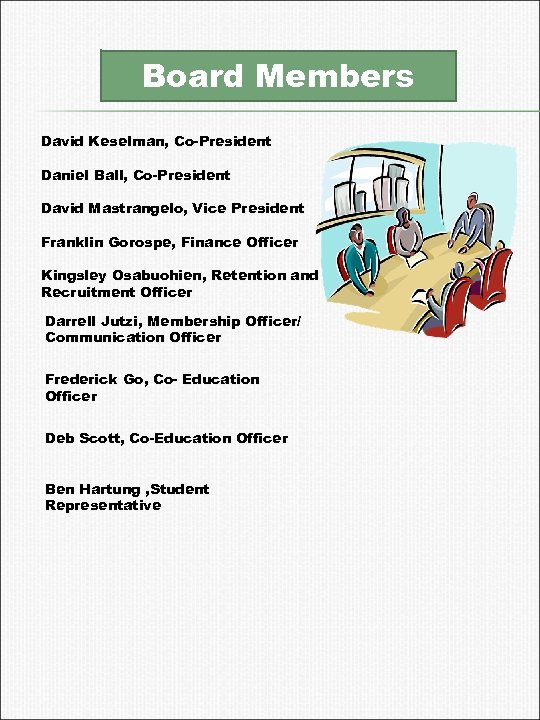 Скачать презентацию Newsletter Spring 2011 in This issue greetings from

Newsletter Spring 2011 in This issue greetings from minig executive Why nursing? minig’s student representative mentorship experience Welcome from MINIG Executive This year’s AGM is just around the corner and the Men in Nursing Interest Group Executive Team is inviting all members to attend! Join us April 9 th, 2011 from 0830 -1100 at the Toronto Hilton Hotel. Breakfast is on us!!! Please RSVP @ minig. [email protected] com. We plan to make this the largest event to date and the agenda is packed full of excitement. Come meet your entire Executive Team! In addition, guest speaker Gail Donner will be making an appearance. Gail holds undergraduate membership update and graduate degrees in nursing and a Ph. D in adult education from the University of Toronto. Gail retired in 2001 as Professor and Dean from the Faculty of Nursing at the University of Toronto. She has held a number of government and community appointments, including, member of the Metro Toronto District Health Council Hospital Restructuring Committee; Chair, Air Ambulance Review, Ministry of Health, Ontario; and Vice-chair of the Director's Advisory Committee on the Long-Term Future of the Ontario Institute for Studies in Education (OISE). Gail will be discussing and presenting the Donner and Wheeler Career planning model, and those of you who are seeking to build and strengthen their career should not miss this unique opportunity. In addition, David Mc. Neil, President RNAO was also invited to attend. It is guaranteed to be an exciting day and we look forward to seeing you there. MINIG is also proud to announce the launch of their new website; http: //minig. rnao. ca. In the short time since its inception, the Men In Nursing Interest Group has emerged as one powerful group with tremendous ambition, vision and accomplishments. We have many more goals on the go and planned for 2011! Our strength is in our numbers and your support is instrumental, we couldn't have done this without you and ask that you help keep the momentum going, join us on April 9 th, mark your calendar now! David Keselman & Daniel Ball

Why Nursing? in the midst of a true winter season, nurses continue to venture out in the pursuit of a safer health care. as 2011 rolls out, minig is committed to promoting the diversity that is celebrated within the nursing profession. embracing the vast amount of knowledge, experiences, and uniqueness amongst this diversity strengthens us collectively. often, nurses overlook their own expertise as they enter nursing. by virtue of caring for people, we have an inherent privilege to explore our own individual perspective as a humanistic profession. i recall anecdotal comments from students in the early 2000’s echo ‘i’m just a new nurse’, into today’s student nurses engaged in interprofessionalism, modeling world health organization groups, lobbying governments, and much more echoing the phrase ‘i am a nurse…i am unique…i am a person’. as we continue to face the challenges of 2011 – let us be encouraged by the strength of our students who synergize their nursing knowledge with their individuality. in response to the rhetoric ‘why nursing’, it’s the notion of ‘you can be when you want to be by being who you are’. Franklin F. Gorospe IV RN MN

MINIG’s Student Representative I’m a second year BSc. N student at Lakehead University in Thunder Bay. I have recently joined MINIG this past fall as the student representative. Students make up 53% of MINIG’s members so it is important that your voice is heard. Lakehead has the highest percentage of male nursing students in the province at 18%, so I never feel alone. In class and in clinical, it rarely crosses my mind that I am in a minority. Lakehead is fortunate this way because for the rest of Ontario, the ratios are not always this high. I chose nursing because I loved science, helping people, a fast-paced working environment and the security of knowing I will have a job after my education. As your student representative, its important that we connect and collaborate because we are the future of men in nursing. Ben Hartung

Mentorship Experience When I graduated from nursing school as a mature student in April of 2010 I was both thrilled and highly anxious to be offered a job in ER/Trauma at a large downtown hospital where I had completed my consolidation. This fear was somewhat allayed when I discovered my mentor for the six month orientation was a highly respected male nurse in my nursing is group. Emergency peer age the specialty with the second highest percentage of male nurses (above 10% in 2008 Canadian Nurses Association statistics). Not only has my mentorship turned out to be the most amazing and rewarding experience of my nursing career so far; it has also certainly opened my eyes to the career possibilities in nursing today and given me a whole new respect and admiration My mentors’ career started in 1981 when he graduated with a diploma for men in nursing. His desire or “calling to nurse” which so many of us voice began much earlier but was deferred on the persuasion of family who thought that “real men didn’t nurse”. He later went on to obtain his degree in nursing, followed by a Certificate in Nursing Management, and more recently with his Masters in Nursing. His esteemed and varied career involved managing several units (med/surg/neuro/ICU), both in Ontario and Saudi Arabia. He has worked as an assistant Nurse Manager for The Department of National Defense in Bosnia and as a staff nurse in a Maximum Security Penitentiary. He is the co-author/researcher on several published papers; has presented at conferences and still chooses to work at bedside nursing and mentor new grads.

To the men out there considering nursing as a career choice take the leap of faith and the sky is your limit. For those of you who already have “congratulations!”. Your career prospects have no limits if you are willing to dream big and work hard. I for one have benefitted immensely by having this awesome man/nurse/teacher as my mentor and I am sure I will continue to benefit from his vast education and experience as my career Deb Scott, RN develops Membership Update The MINIG currently has 132 members. Students make up 52% of the membership with the remaining 48% of members being RNs 48% Students 52% The Men in Nursing Interest Group is on also Facebook. Join the group today to network with other members and get the latest on what the MINIG is doing. By joining the group, it also gives you an opportunity to post your suggestions and comments. Help to spread the word of MINIG. Our strength comes in our numbers. If you would like more information on our membership or resources to promote MINIG in your area please let us know.