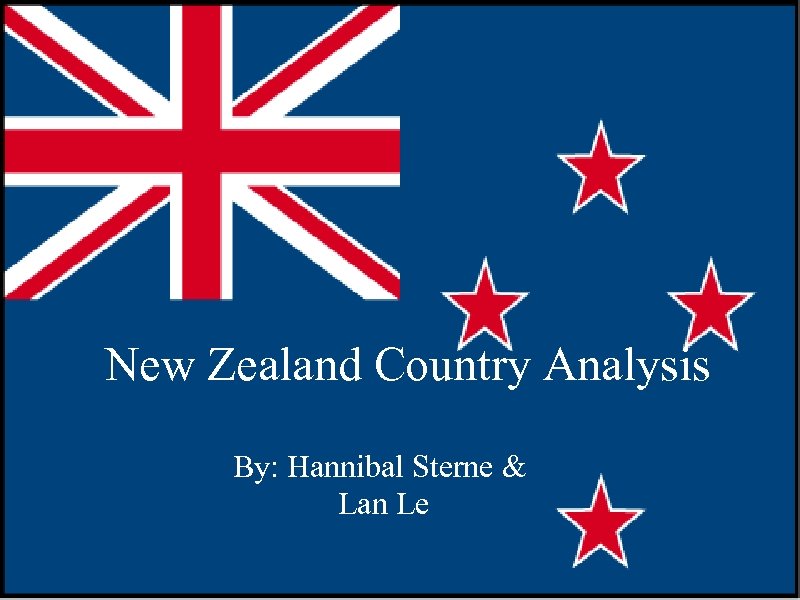 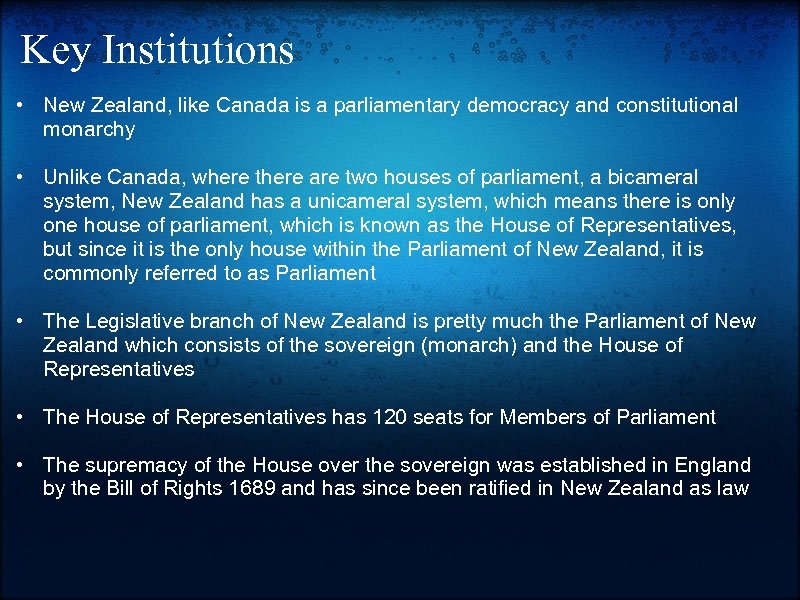 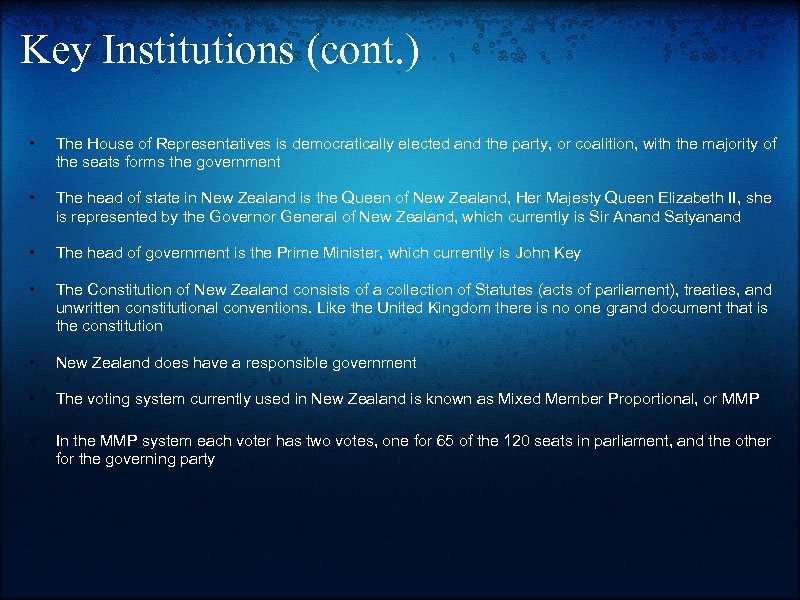 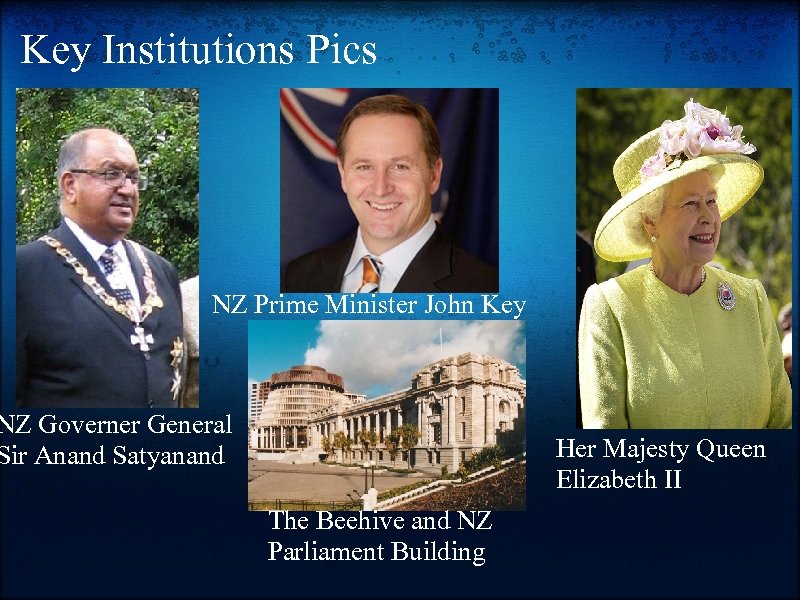 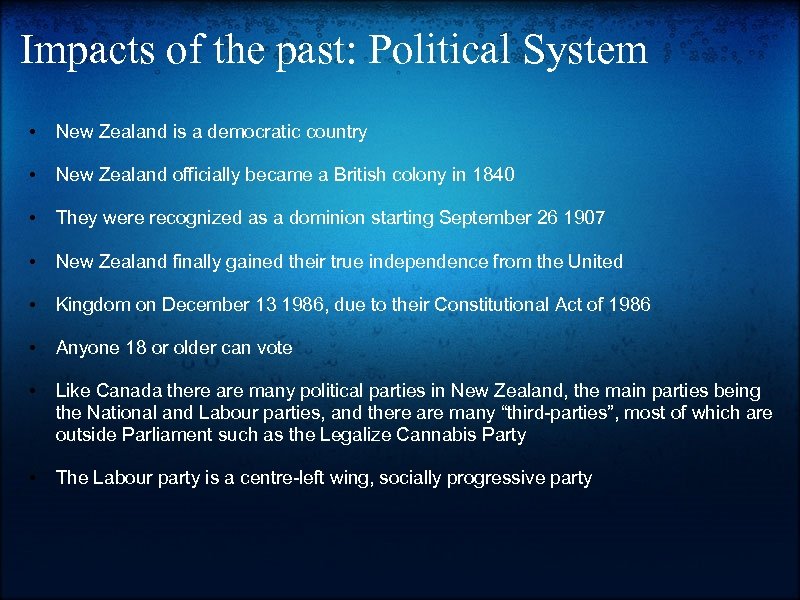 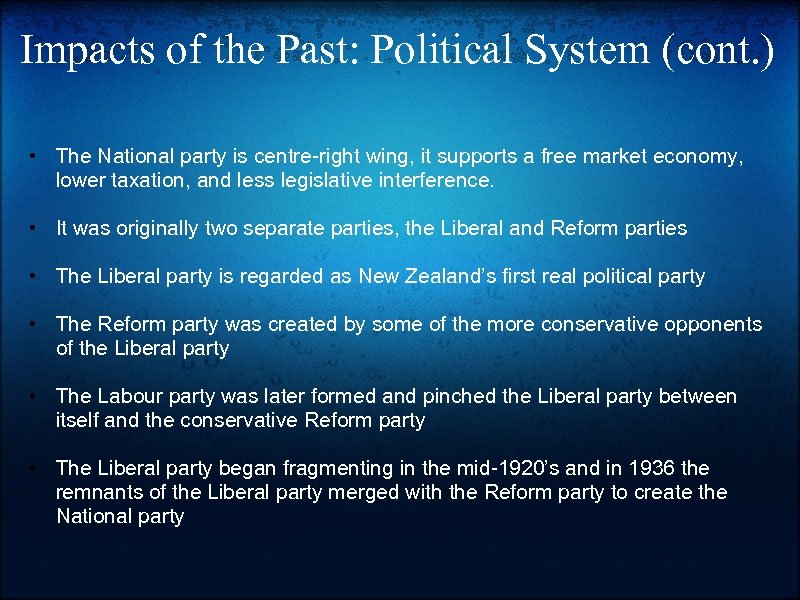 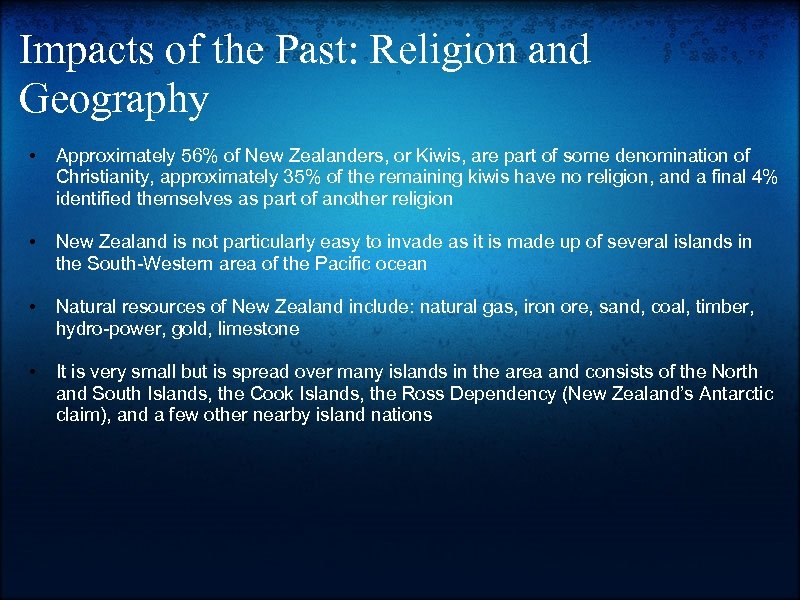 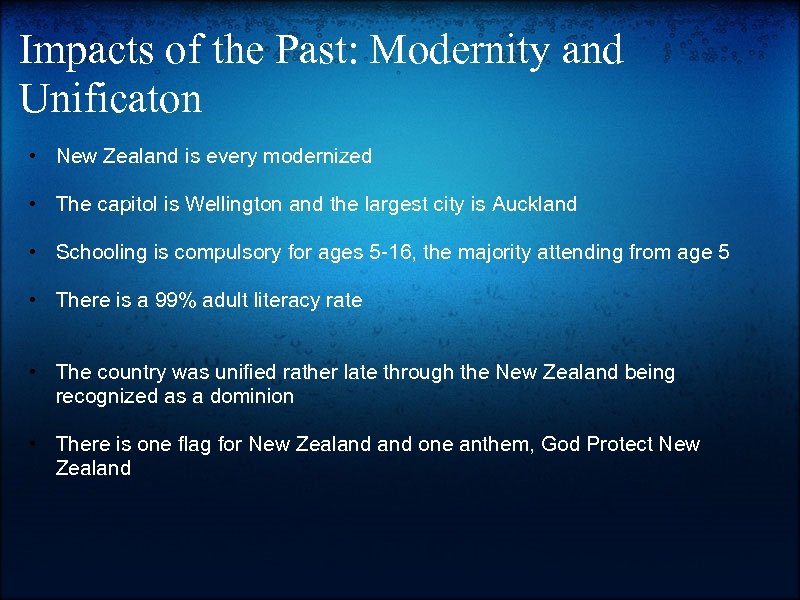 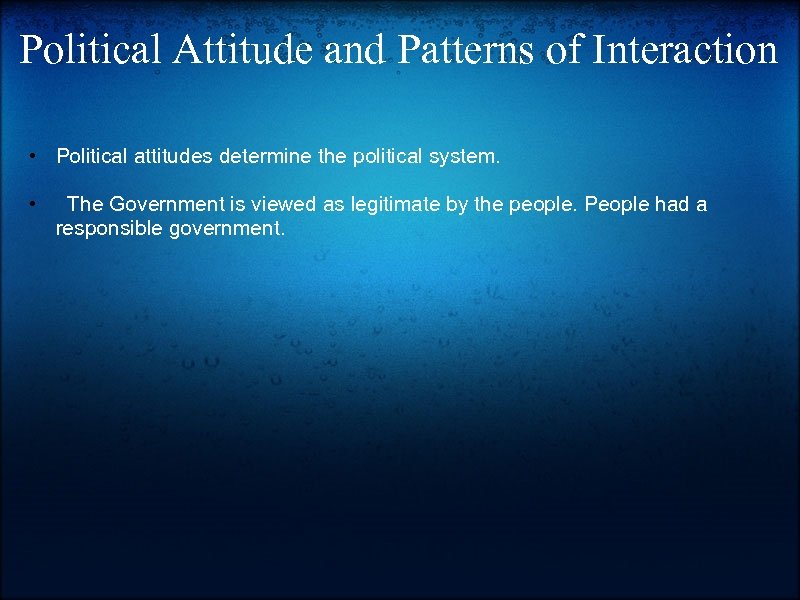 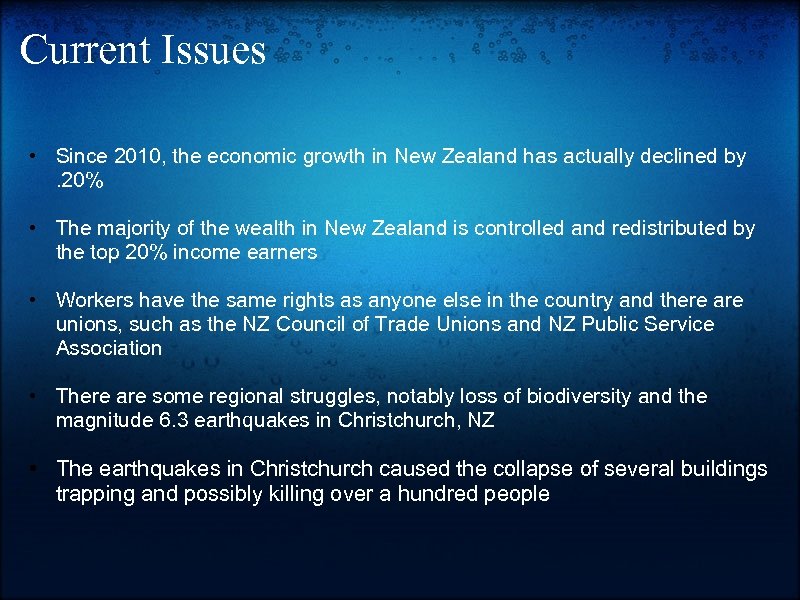 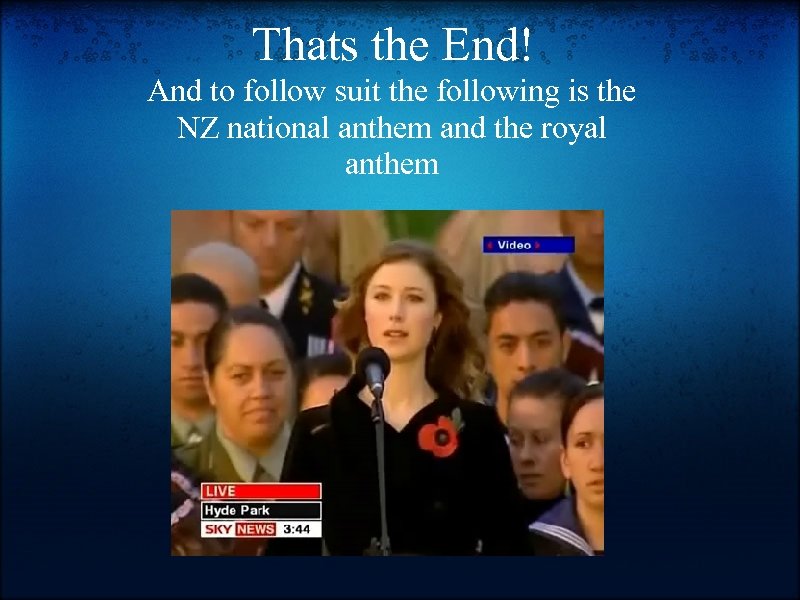 Key Institutions (cont. ) • The House of Representatives is democratically elected and the party, or coalition, with the majority of the seats forms the government • The head of state in New Zealand is the Queen of New Zealand, Her Majesty Queen Elizabeth II, she is represented by the Governor General of New Zealand, which currently is Sir Anand Satyanand • The head of government is the Prime Minister, which currently is John Key • The Constitution of New Zealand consists of a collection of Statutes (acts of parliament), treaties, and unwritten constitutional conventions. Like the United Kingdom there is no one grand document that is the constitution • New Zealand does have a responsible government • The voting system currently used in New Zealand is known as Mixed Member Proportional, or MMP • In the MMP system each voter has two votes, one for 65 of the 120 seats in parliament, and the other for the governing party

Impacts of the past: Political System • New Zealand is a democratic country • New Zealand officially became a British colony in 1840 • They were recognized as a dominion starting September 26 1907 • New Zealand finally gained their true independence from the United • Kingdom on December 13 1986, due to their Constitutional Act of 1986 • Anyone 18 or older can vote • Like Canada there are many political parties in New Zealand, the main parties being the National and Labour parties, and there are many “third-parties”, most of which are outside Parliament such as the Legalize Cannabis Party • The Labour party is a centre-left wing, socially progressive party

Impacts of the Past: Religion and Geography • Approximately 56% of New Zealanders, or Kiwis, are part of some denomination of Christianity, approximately 35% of the remaining kiwis have no religion, and a final 4% identified themselves as part of another religion • New Zealand is not particularly easy to invade as it is made up of several islands in the South-Western area of the Pacific ocean • Natural resources of New Zealand include: natural gas, iron ore, sand, coal, timber, hydro-power, gold, limestone • It is very small but is spread over many islands in the area and consists of the North and South Islands, the Cook Islands, the Ross Dependency (New Zealand’s Antarctic claim), and a few other nearby island nations

Impacts of the Past: Modernity and Unificaton • New Zealand is every modernized • The capitol is Wellington and the largest city is Auckland • Schooling is compulsory for ages 5 -16, the majority attending from age 5 • There is a 99% adult literacy rate • The country was unified rather late through the New Zealand being recognized as a dominion • There is one flag for New Zealand one anthem, God Protect New Zealand

Political Attitude and Patterns of Interaction • Political attitudes determine the political system. • The Government is viewed as legitimate by the people. People had a responsible government.

Current Issues • Since 2010, the economic growth in New Zealand has actually declined by . 20% • The majority of the wealth in New Zealand is controlled and redistributed by the top 20% income earners • Workers have the same rights as anyone else in the country and there are unions, such as the NZ Council of Trade Unions and NZ Public Service Association • There are some regional struggles, notably loss of biodiversity and the magnitude 6. 3 earthquakes in Christchurch, NZ • The earthquakes in Christchurch caused the collapse of several buildings trapping and possibly killing over a hundred people

Thats the End! And to follow suit the following is the NZ national anthem and the royal anthem