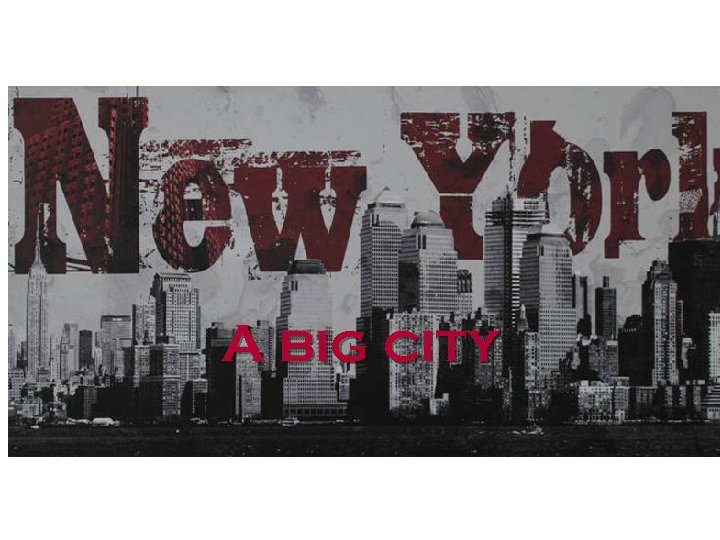 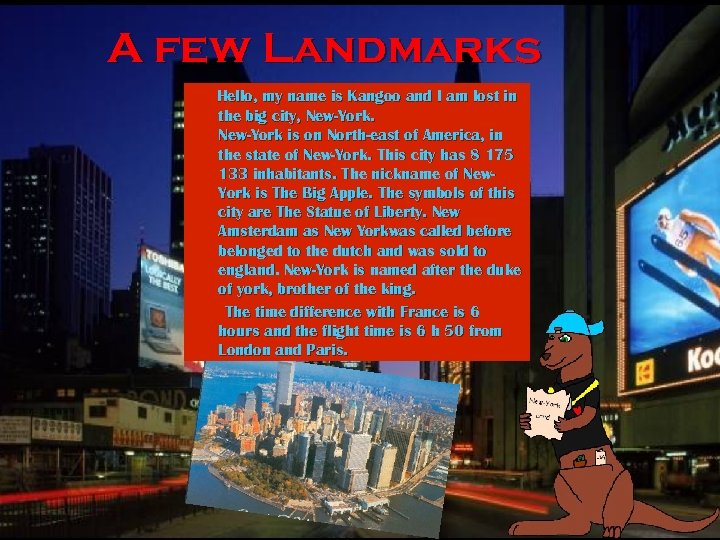 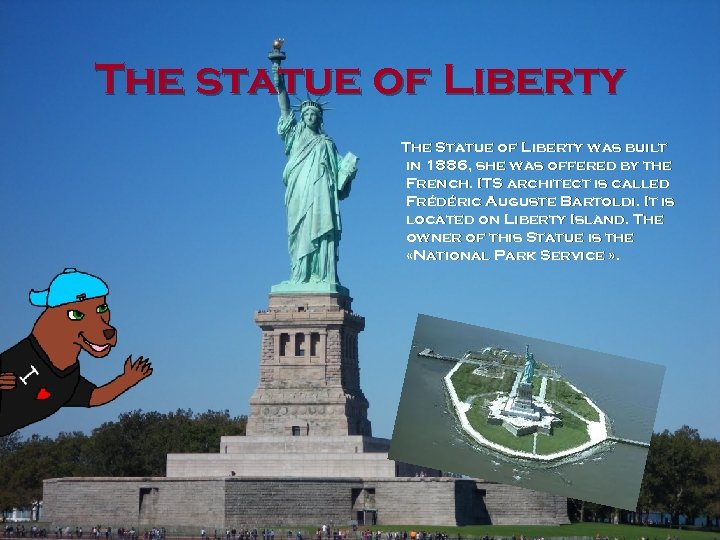 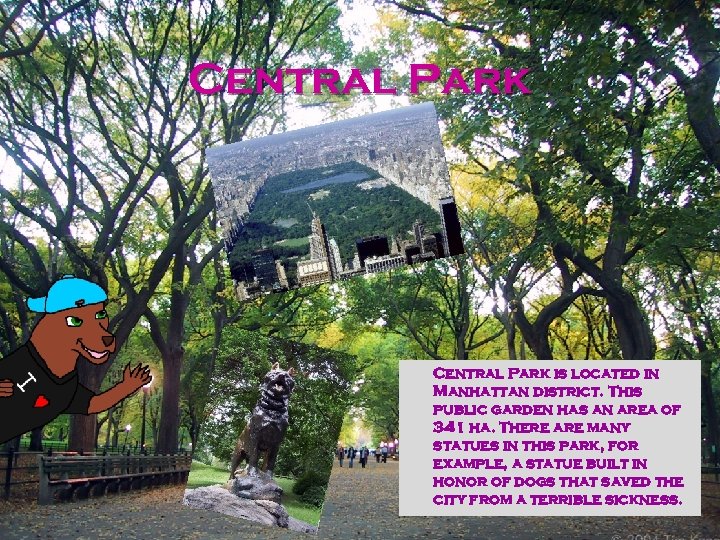 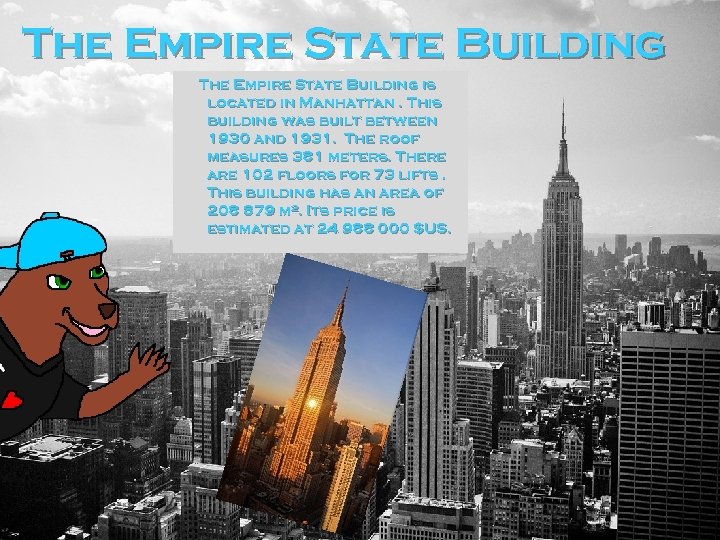 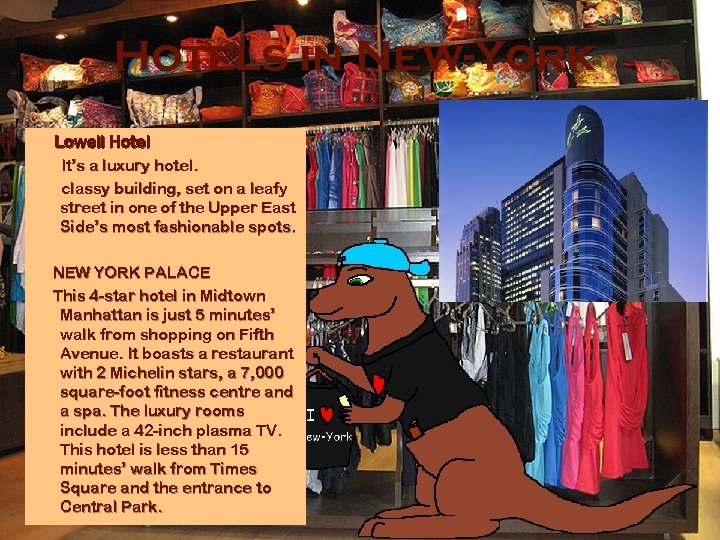 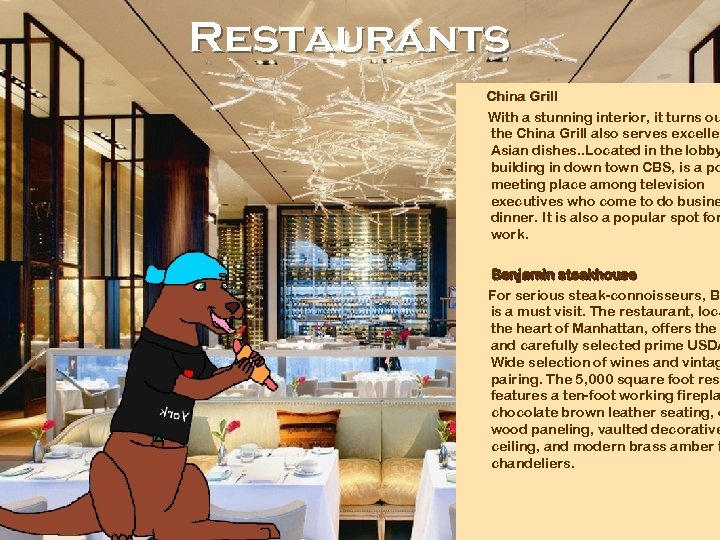 A few Landmarks Hello, my name is Kangoo and I am lost in the big city, New-York is on North-east of America, in the state of New-York. This city has 8 175 133 inhabitants. The nickname of New. York is The Big Apple. The symbols of this city are The Statue of Liberty. New Amsterdam as New Yorkwas called before belonged to the dutch and was sold to england. New-York is named after the duke of york, brother of the king. The time difference with France is 6 hours and the flight time is 6 h 50 from London and Paris.

The statue of Liberty The Statue of Liberty was built in 1886, she was offered by the French. ITS architect is called Frédéric Auguste Bartoldi. It is located on Liberty Island. The owner of this Statue is the «National Park Service » .

Central Park is located in Manhattan district. This public garden has an area of 341 ha. There are many statues in this park, for example, a statue built in honor of dogs that saved the city from a terrible sickness.

Hotels in New-York Lowell Hotel It’s a luxury hotel. classy building, set on a leafy street in one of the Upper East Side’s most fashionable spots. NEW YORK PALACE This 4 -star hotel in Midtown Manhattan is just 5 minutes’ walk from shopping on Fifth Avenue. It boasts a restaurant with 2 Michelin stars, a 7, 000 square-foot fitness centre and a spa. The luxury rooms include a 42 -inch plasma TV. This hotel is less than 15 minutes’ walk from Times Square and the entrance to Central Park.

Restaurants China Grill With a stunning interior, it turns ou the China Grill also serves excellen Asian dishes. . Located in the lobby building in down town CBS, is a po meeting place among television executives who come to do busine dinner. It is also a popular spot for work. Benjamin steakhouse For serious steak-connoisseurs, Be is a must visit. The restaurant, loca the heart of Manhattan, offers the and carefully selected prime USDA Wide selection of wines and vintag pairing. The 5, 000 square foot rest features a ten-foot working firepla chocolate brown leather seating, o wood paneling, vaulted decorative ceiling, and modern brass amber t chandeliers.