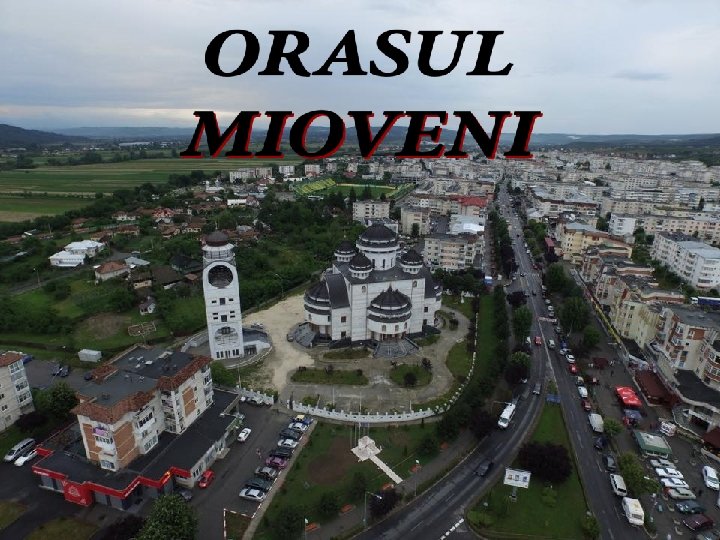 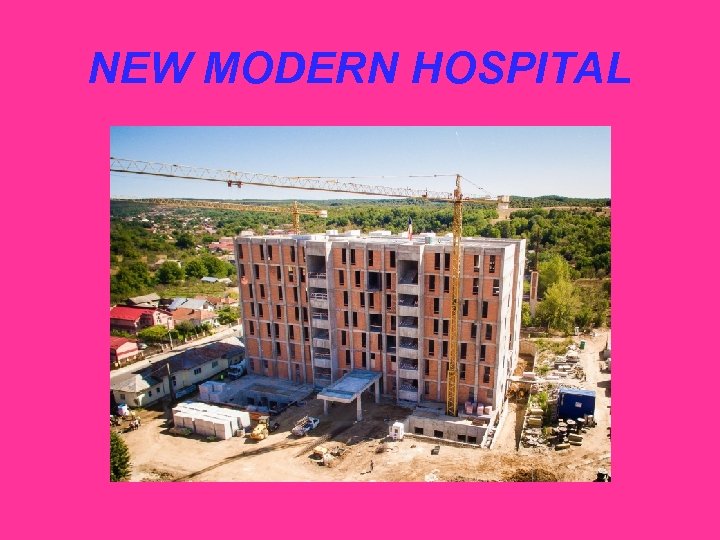 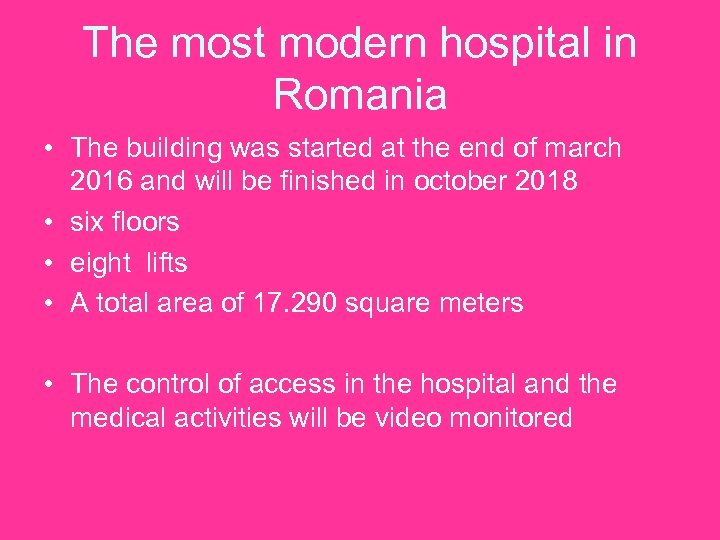 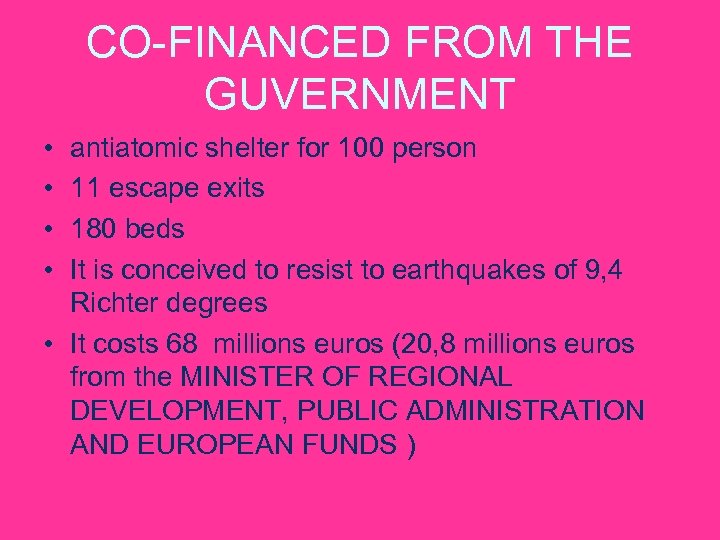 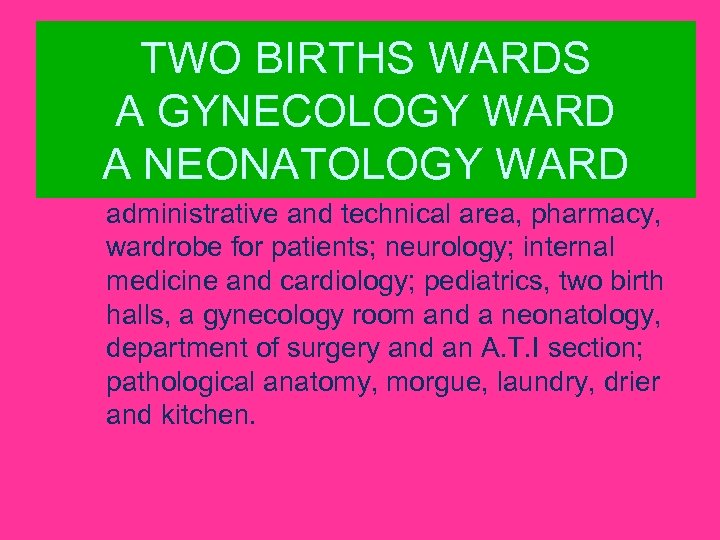 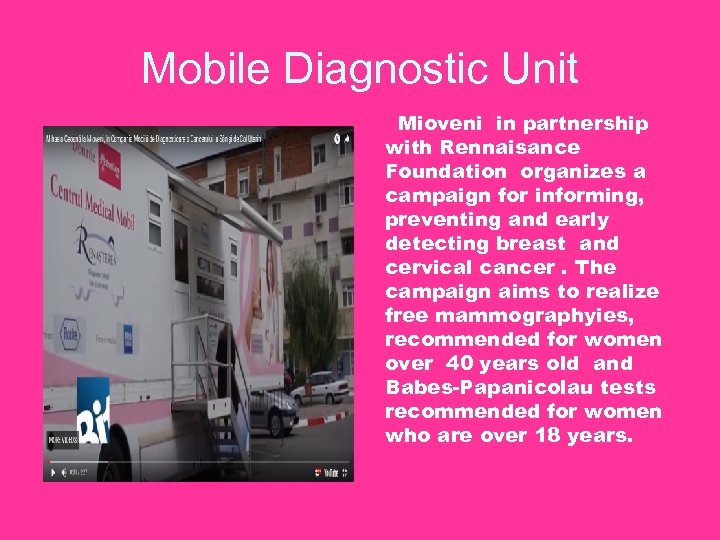 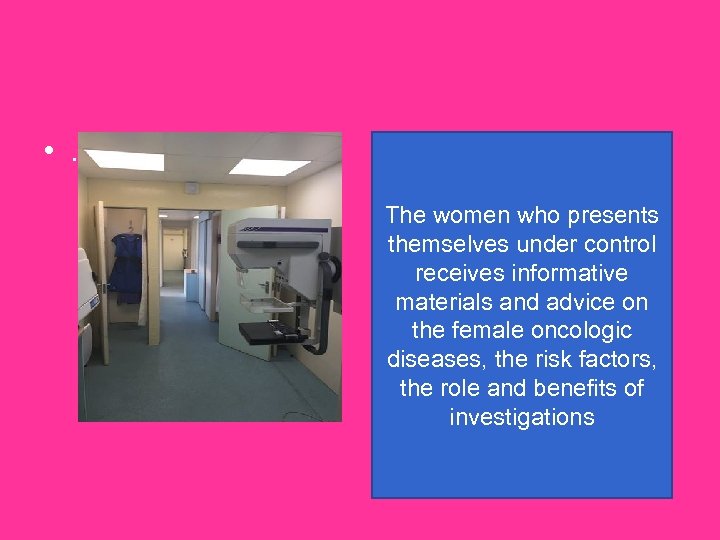 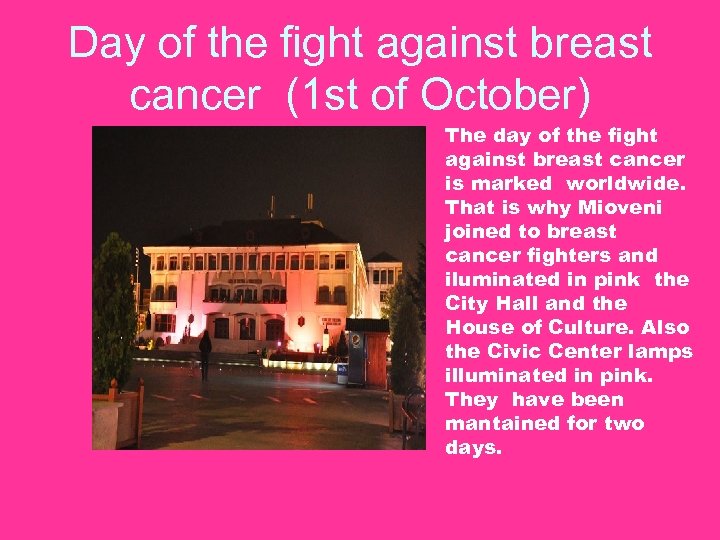 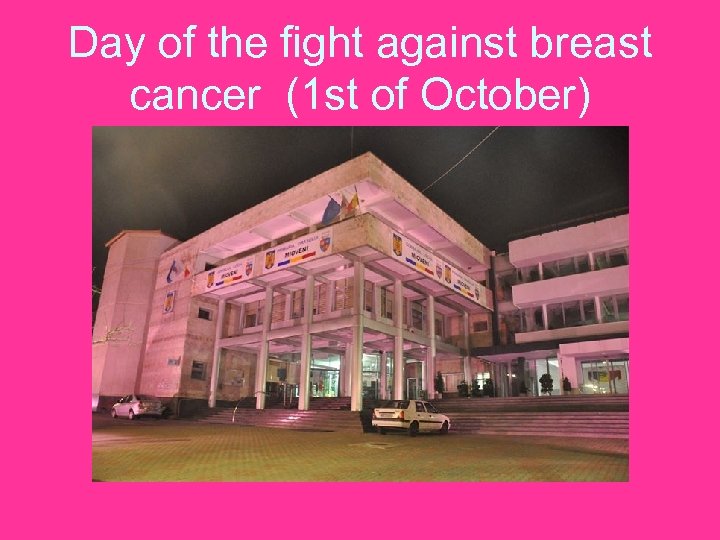 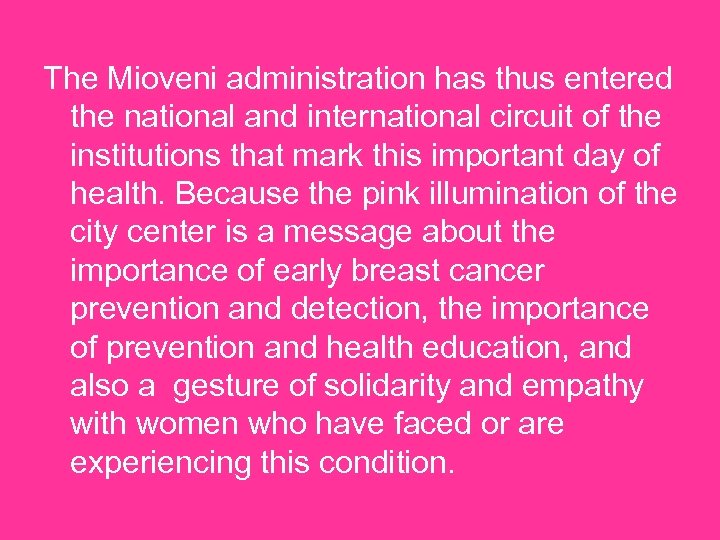 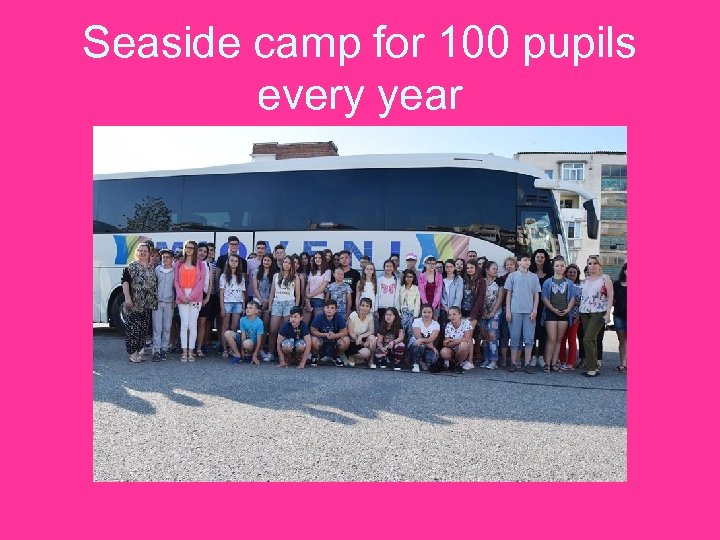 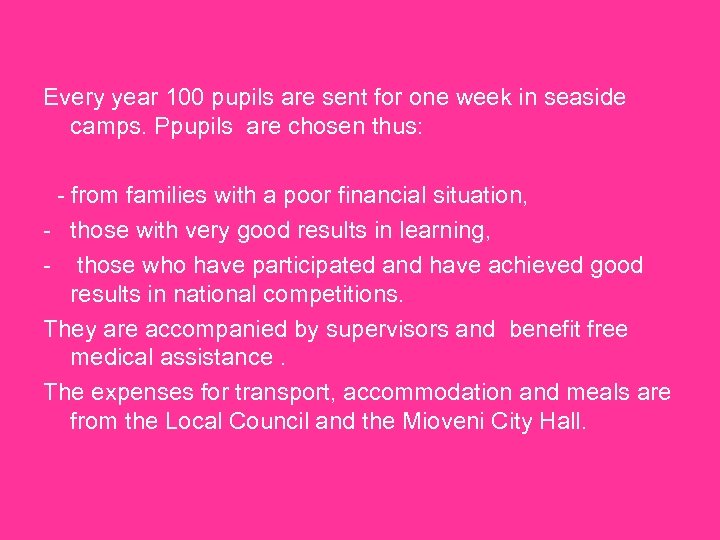 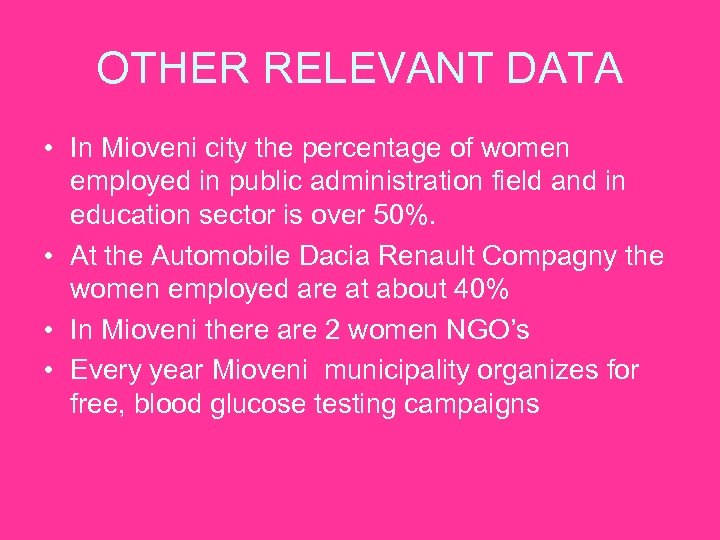 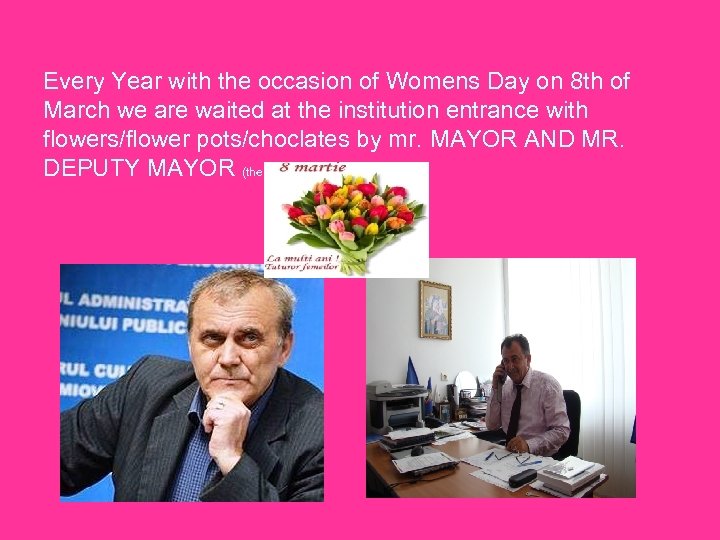 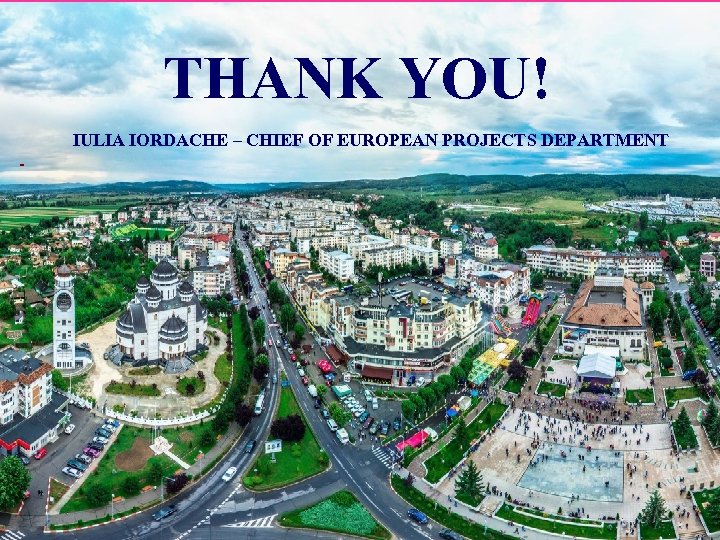 The most modern hospital in Romania • The building was started at the end of march 2016 and will be finished in october 2018 • six floors • eight lifts • A total area of 17. 290 square meters • The control of access in the hospital and the medical activities will be video monitored

CO-FINANCED FROM THE GUVERNMENT • • antiatomic shelter for 100 person 11 escape exits 180 beds It is conceived to resist to earthquakes of 9, 4 Richter degrees • It costs 68 millions euros (20, 8 millions euros from the MINISTER OF REGIONAL DEVELOPMENT, PUBLIC ADMINISTRATION AND EUROPEAN FUNDS )

Mobile Diagnostic Unit Mioveni in partnership with Rennaisance Foundation organizes a campaign for informing, preventing and early detecting breast and cervical cancer. The campaign aims to realize free mammographyies, recommended for women over 40 years old and Babes-Papanicolau tests recommended for women who are over 18 years.

• . The women who presents themselves under control receives informative materials and advice on the female oncologic diseases, the risk factors, the role and benefits of investigations

Day of the fight against breast cancer (1 st of October)

The Mioveni administration has thus entered the national and international circuit of the institutions that mark this important day of health. Because the pink illumination of the city center is a message about the importance of early breast cancer prevention and detection, the importance of prevention and health education, and also a gesture of solidarity and empathy with women who have faced or are experiencing this condition.

Seaside camp for 100 pupils every year

Every year 100 pupils are sent for one week in seaside camps. Ppupils are chosen thus: - from families with a poor financial situation, - those with very good results in learning, - those who have participated and have achieved good results in national competitions. They are accompanied by supervisors and benefit free medical assistance. The expenses for transport, accommodation and meals are from the Local Council and the Mioveni City Hall.

OTHER RELEVANT DATA • In Mioveni city the percentage of women employed in public administration field and in education sector is over 50%. • At the Automobile Dacia Renault Compagny the women employed are at about 40% • In Mioveni there are 2 women NGO’s • Every year Mioveni municipality organizes for free, blood glucose testing campaigns

Every Year with the occasion of Womens Day on 8 th of March we are waited at the institution entrance with flowers/flower pots/choclates by mr. MAYOR AND MR. DEPUTY MAYOR (their own budget)