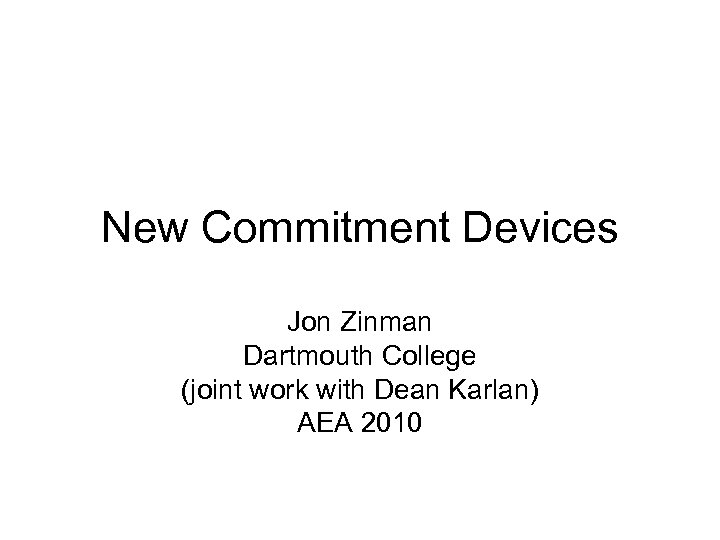 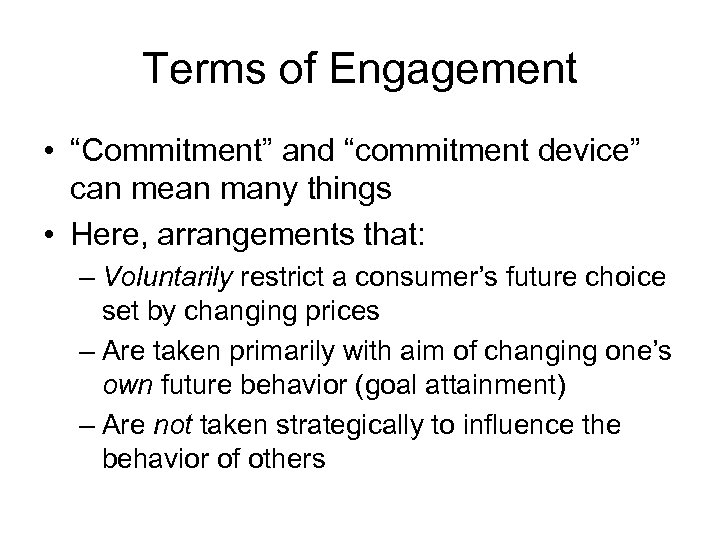 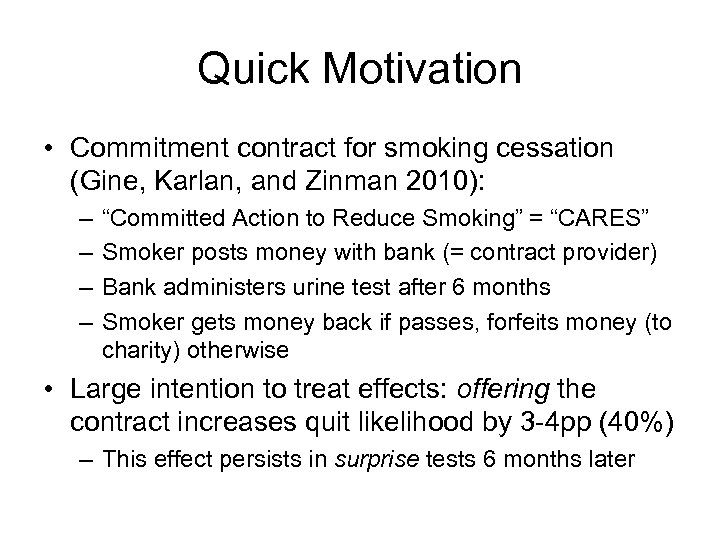 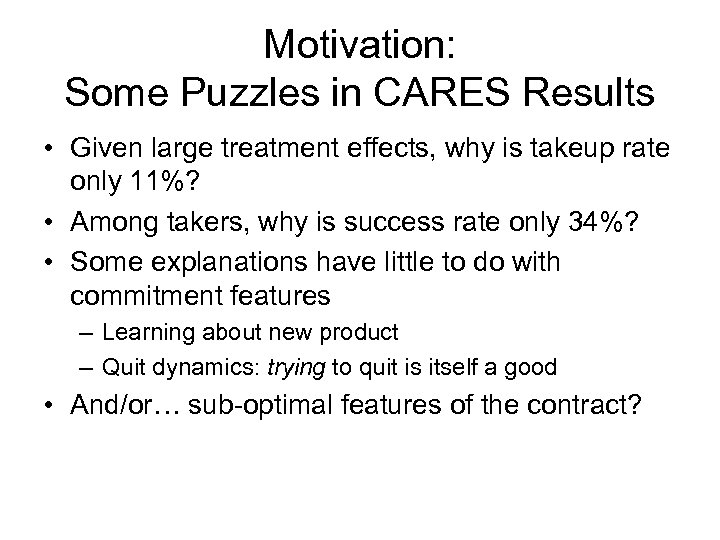 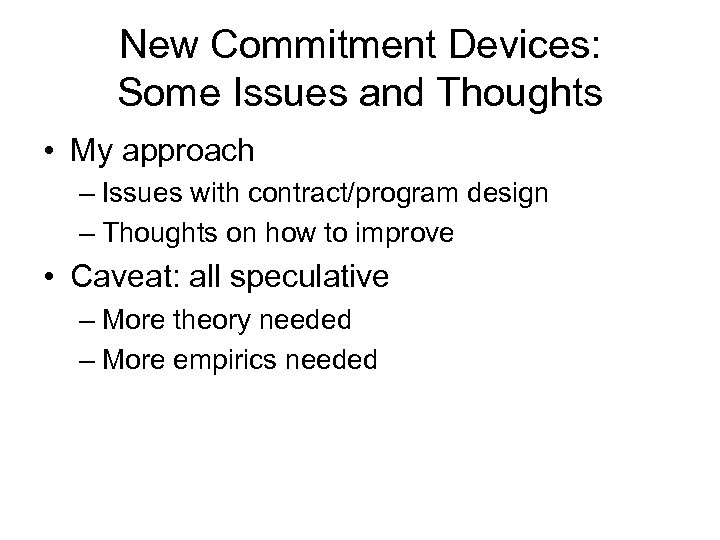 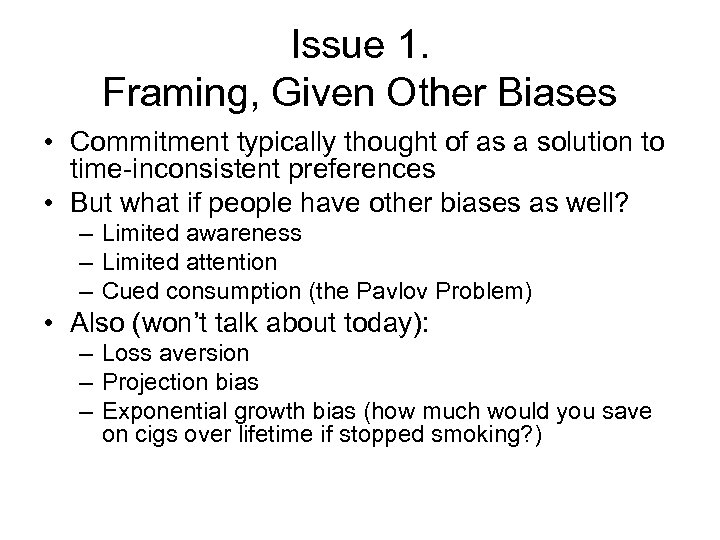 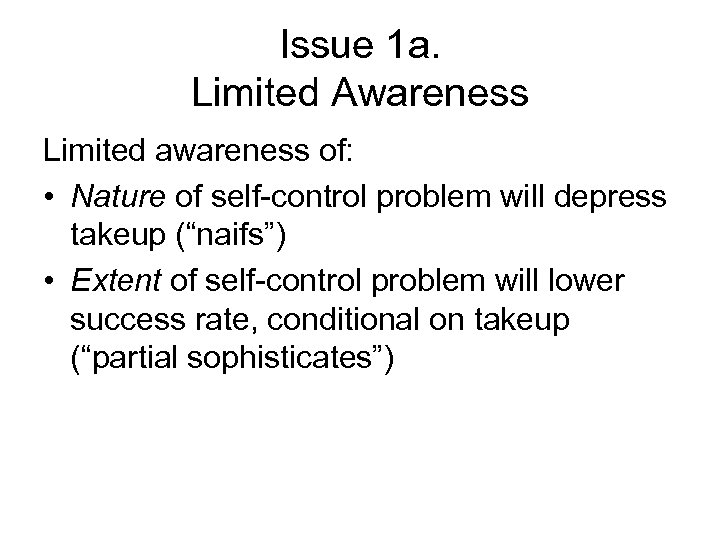 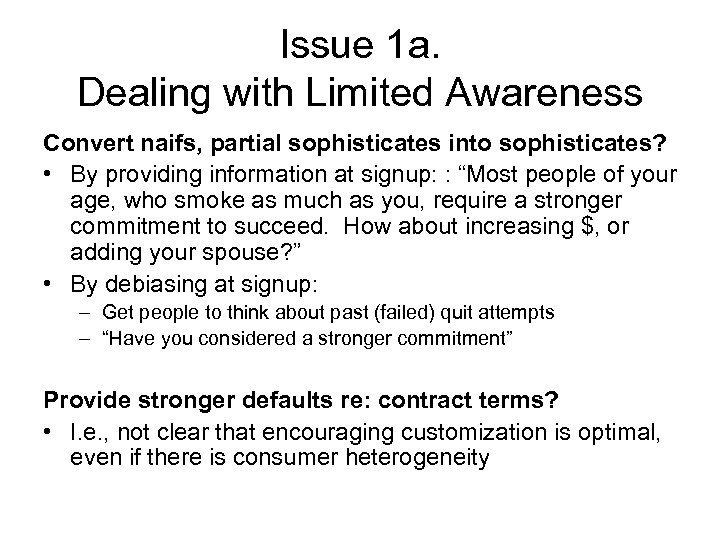 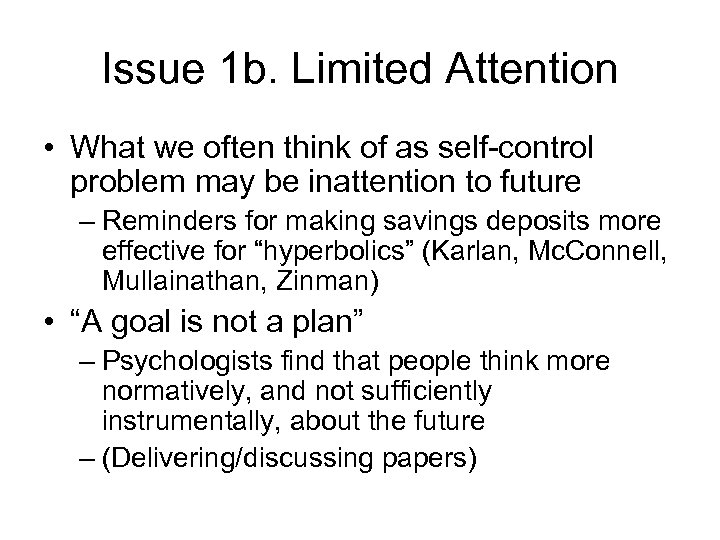 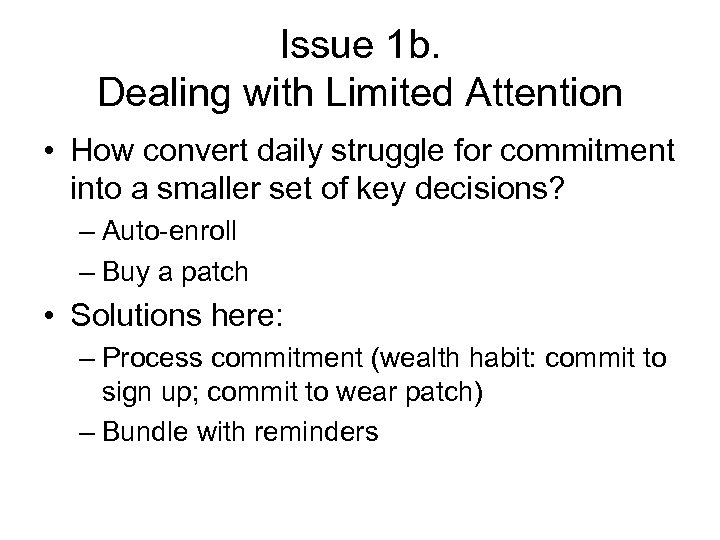 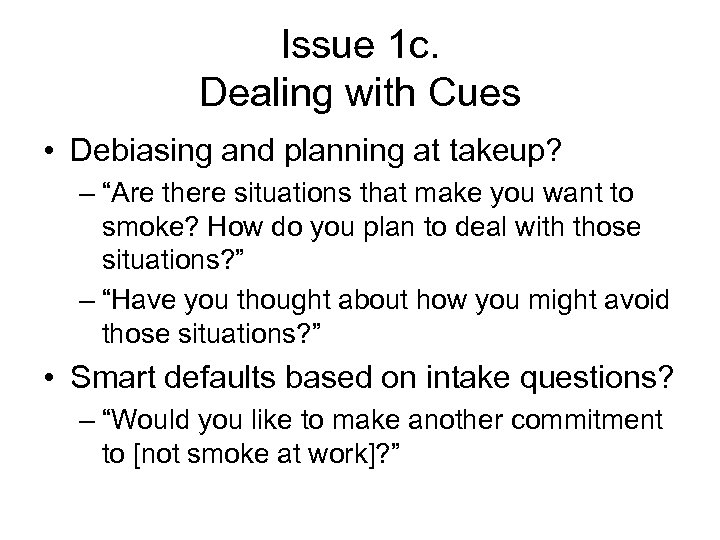 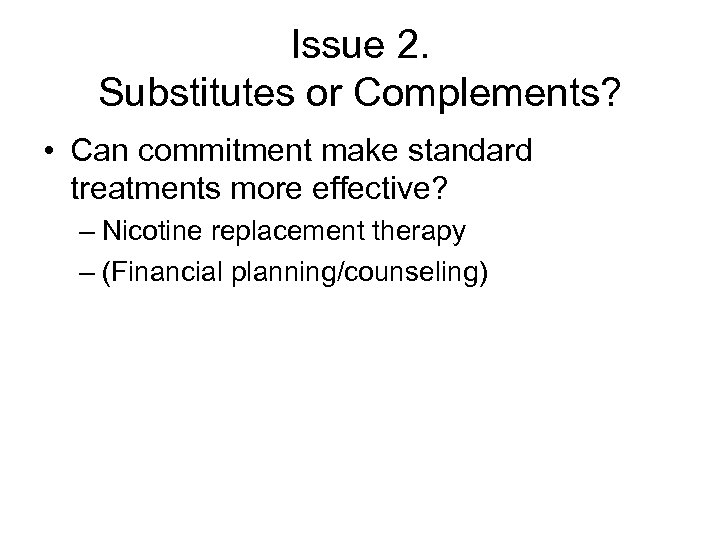 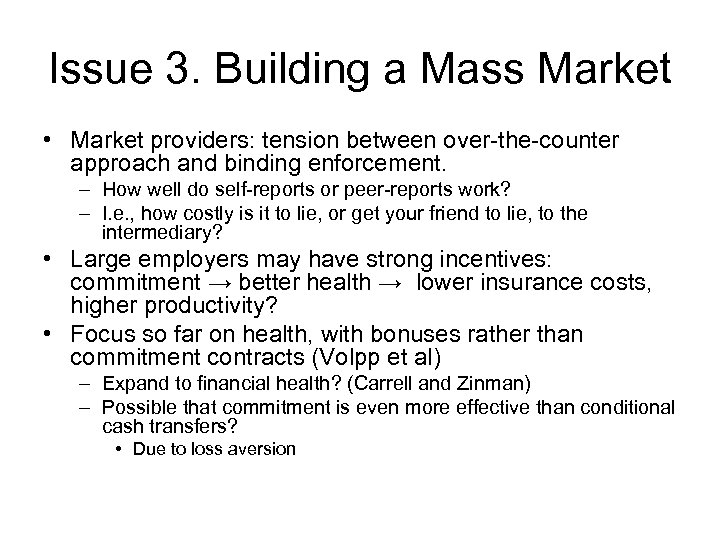 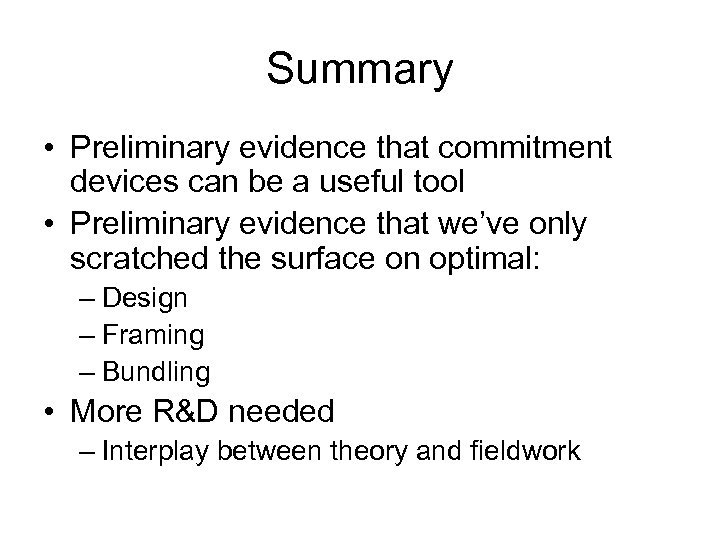 Terms of Engagement • “Commitment” and “commitment device” can mean many things • Here, arrangements that: – Voluntarily restrict a consumer’s future choice set by changing prices – Are taken primarily with aim of changing one’s own future behavior (goal attainment) – Are not taken strategically to influence the behavior of others

Motivation: Some Puzzles in CARES Results • Given large treatment effects, why is takeup rate only 11%? • Among takers, why is success rate only 34%? • Some explanations have little to do with commitment features – Learning about new product – Quit dynamics: trying to quit is itself a good • And/or… sub-optimal features of the contract?

Issue 1. Framing, Given Other Biases • Commitment typically thought of as a solution to time-inconsistent preferences • But what if people have other biases as well? – Limited awareness – Limited attention – Cued consumption (the Pavlov Problem) • Also (won’t talk about today): – Loss aversion – Projection bias – Exponential growth bias (how much would you save on cigs over lifetime if stopped smoking? )

Issue 1 a. Dealing with Limited Awareness Convert naifs, partial sophisticates into sophisticates? • By providing information at signup: : “Most people of your age, who smoke as much as you, require a stronger commitment to succeed. How about increasing $, or adding your spouse? ” • By debiasing at signup: – Get people to think about past (failed) quit attempts – “Have you considered a stronger commitment” Provide stronger defaults re: contract terms? • I. e. , not clear that encouraging customization is optimal, even if there is consumer heterogeneity

Issue 1 b. Limited Attention • What we often think of as self-control problem may be inattention to future – Reminders for making savings deposits more effective for “hyperbolics” (Karlan, Mc. Connell, Mullainathan, Zinman) • “A goal is not a plan” – Psychologists find that people think more normatively, and not sufficiently instrumentally, about the future – (Delivering/discussing papers)

Issue 1 b. Dealing with Limited Attention • How convert daily struggle for commitment into a smaller set of key decisions? – Auto-enroll – Buy a patch • Solutions here: – Process commitment (wealth habit: commit to sign up; commit to wear patch) – Bundle with reminders

Issue 1 c. Dealing with Cues • Debiasing and planning at takeup? – “Are there situations that make you want to smoke? How do you plan to deal with those situations? ” – “Have you thought about how you might avoid those situations? ” • Smart defaults based on intake questions? – “Would you like to make another commitment to [not smoke at work]? ”

Issue 3. Building a Mass Market • Market providers: tension between over-the-counter approach and binding enforcement. – How well do self-reports or peer-reports work? – I. e. , how costly is it to lie, or get your friend to lie, to the intermediary? • Large employers may have strong incentives: commitment → better health → lower insurance costs, higher productivity? • Focus so far on health, with bonuses rather than commitment contracts (Volpp et al) – Expand to financial health? (Carrell and Zinman) – Possible that commitment is even more effective than conditional cash transfers? • Due to loss aversion