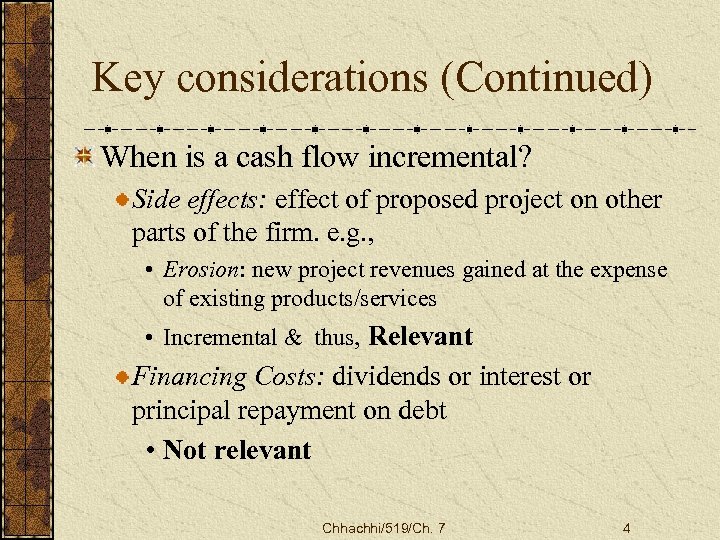 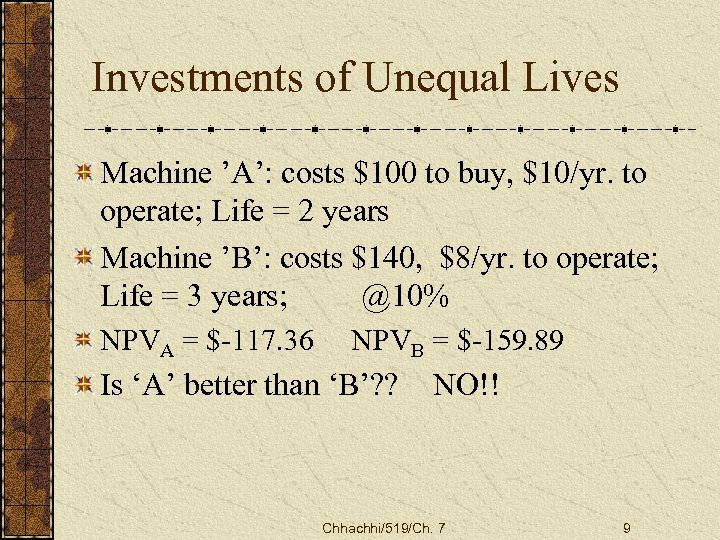 Cash Flow Estimation CFs are in future ® uncertainty What are the relevant CFs for a project? Incremental Cash Flows Any and all changes in the firm’s CFs that are a direct consequence of taking the project Chhachhi/519/Ch. 7 2

Key considerations in Cash Flow Estimation When is a CF incremental? Sunk costs: cash outlay already incurred; Will not be affected by the accept/reject decision • Not Incremental & thus, Not relevant Opportunity costs: resources that could be directed towards other productive uses. Affected by the accept/reject decision • Incremental & thus, Relevant Chhachhi/519/Ch. 7 3

Key considerations (Continued) When is a cash flow incremental? Side effects: effect of proposed project on other parts of the firm. e. g. , • Erosion: new project revenues gained at the expense of existing products/services • Incremental & thus, Relevant Financing Costs: dividends or interest or principal repayment on debt • Not relevant Chhachhi/519/Ch. 7 4

Key considerations (Continued) When is a cash flow incremental? Net Working Capital (CA - CL): any change in NWC affects CFs. For NWC , cash has to be spent: negative CF. No change in NWC from one period to next means NO impact on the CFs. Recovered at the project’s end: positive CF • Incremental & thus, Relevant Other Issues: Use CFs; not A/C numbers. Use after-tax cash flows Chhachhi/519/Ch. 7 5