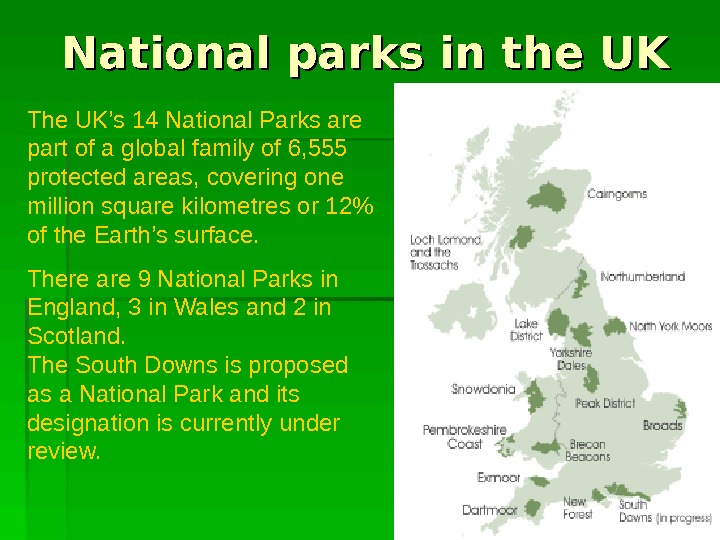 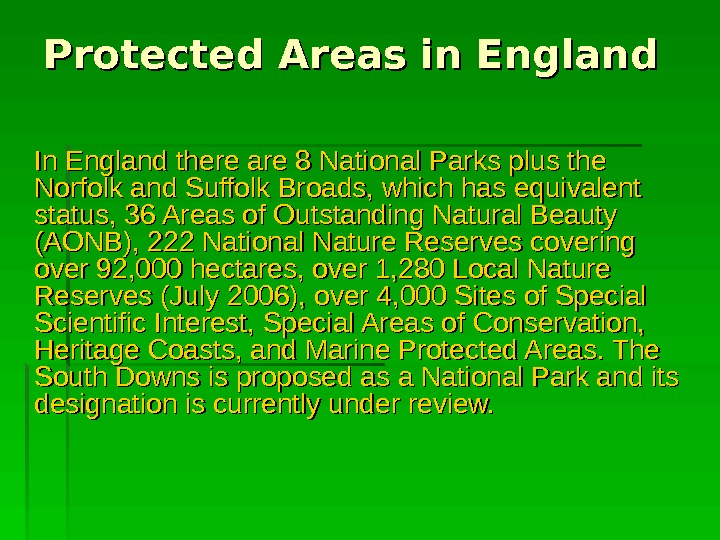 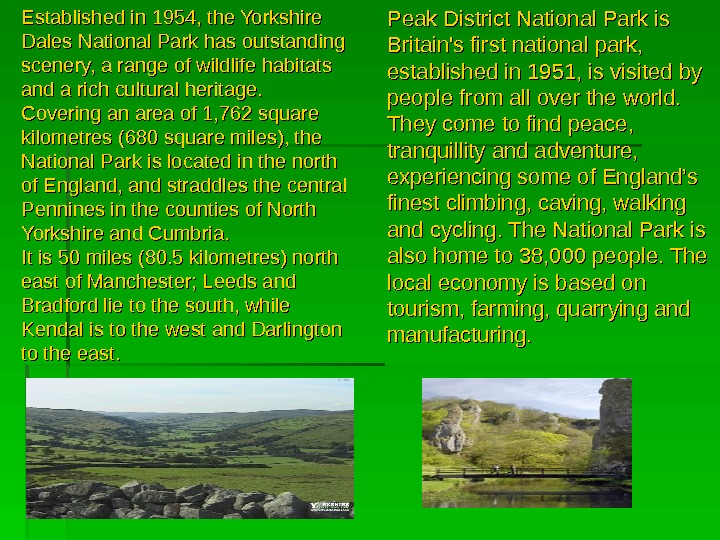 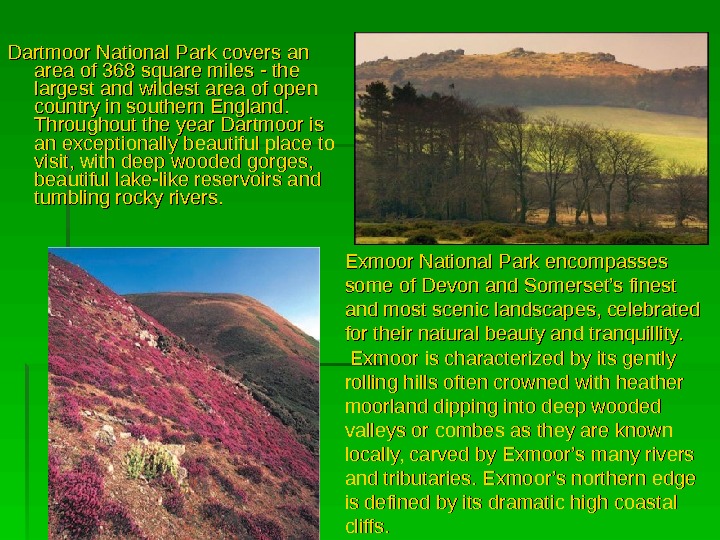 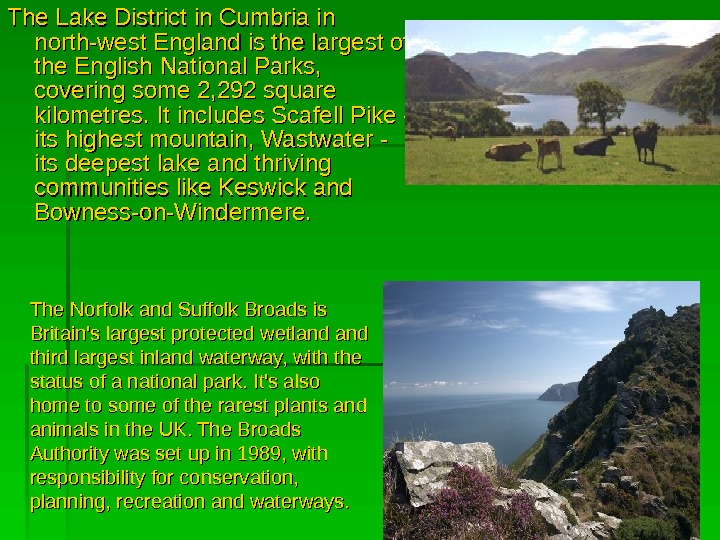 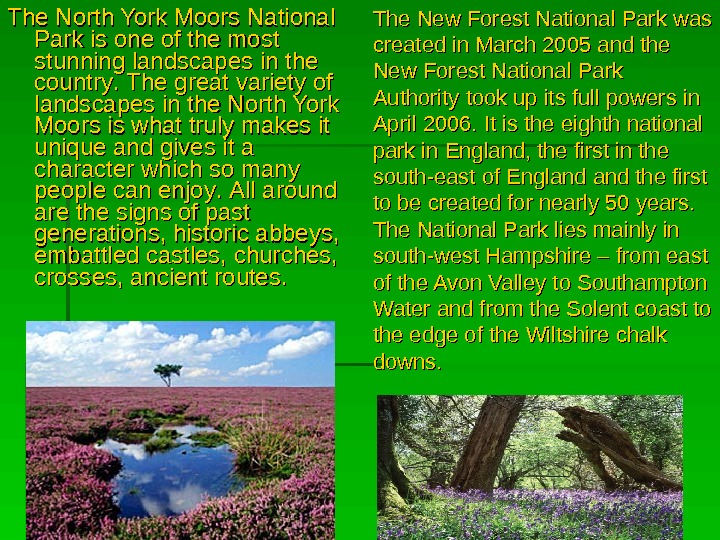 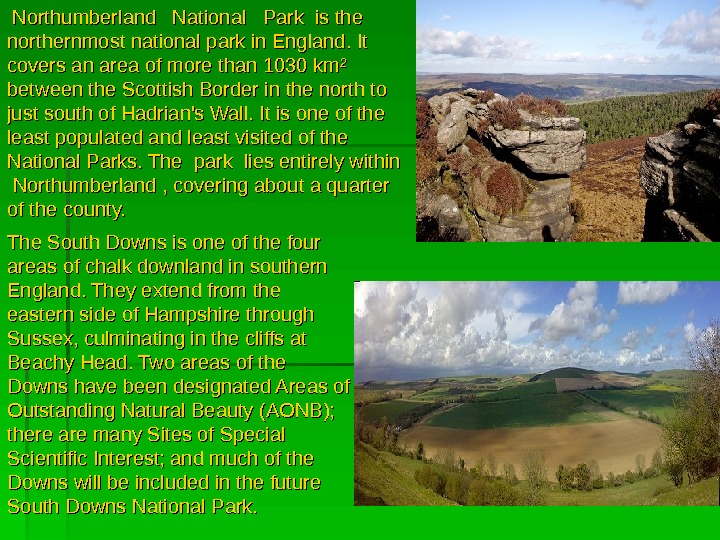 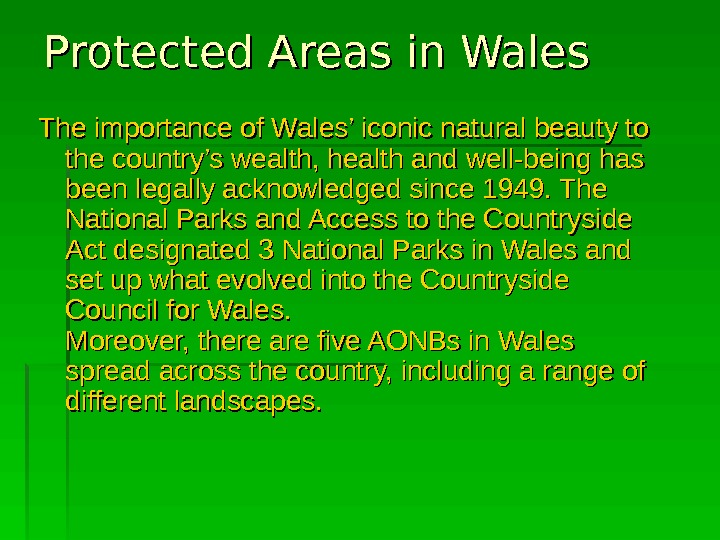 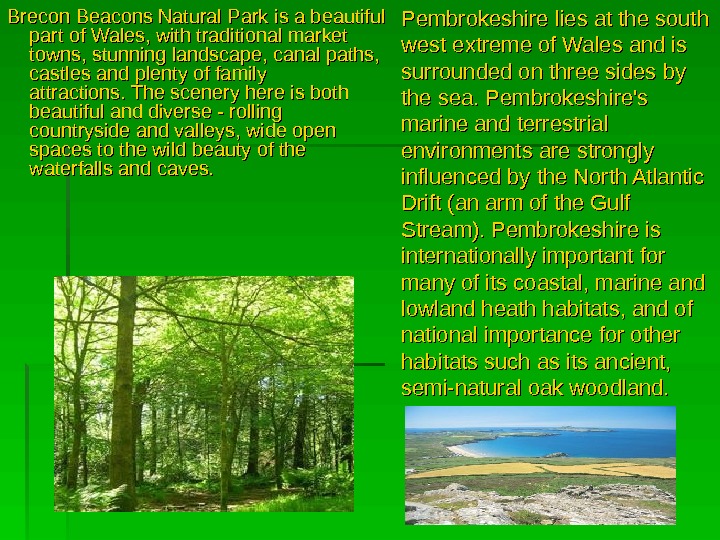 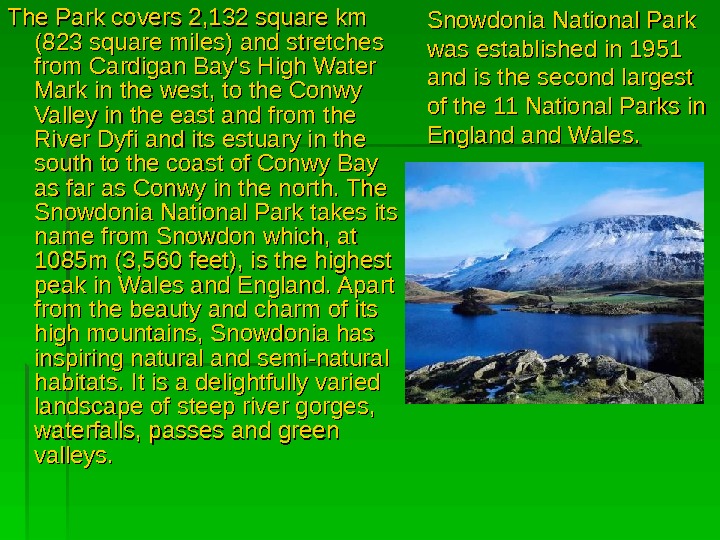 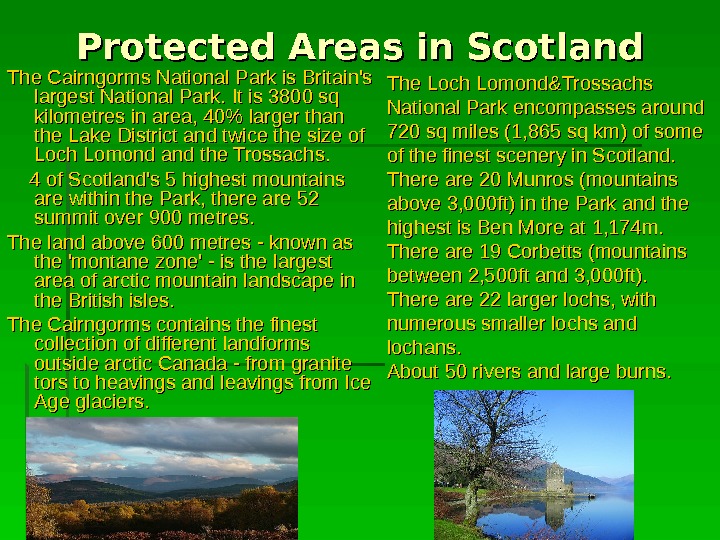 Скачать презентацию National parks in the UK The UK’s 14

National parks in the UK The UK’s 14 National Parks are part of a global family of 6, 555 protected areas, covering one million square kilometres or 12% of the Earth’s surface. There are 9 National Parks in England, 3 in Wales and 2 in Scotland. The South Downs is proposed as a National Park and its designation is currently under review.

Protected Areas in England In England there are 8 National Parks plus the Norfolk and Suffolk Broads, which has equivalent status, 36 Areas of Outstanding Natural Beauty (AONB), 222 National Nature Reserves covering over 92, 000 hectares, over 1, 280 Local Nature Reserves (July 2006), over 4, 000 Sites of Special Scientific Interest, Special Areas of Conservation, Heritage Coasts, and Marine Protected Areas. The South Downs is proposed as a National Park and its designation is currently under review.

Peak District National Park is Britain’s first national park, established in 1951, is visited by people from all over the world. They come to find peace, tranquillity and adventure, experiencing some of England’s finest climbing, caving, walking and cycling. The National Park is also home to 38, 000 people. The local economy is based on tourism, farming, quarrying and manufacturing. Established in 1954, the Yorkshire Dales National Park has outstanding scenery, a range of wildlife habitats and a rich cultural heritage. Covering an area of 1, 762 square kilometres (680 square miles), the National Park is located in the north of England, and straddles the central Pennines in the counties of North Yorkshire and Cumbria. It is 50 miles (80. 5 kilometres) north east of Manchester; Leeds and Bradford lie to the south, while Kendal is to the west and Darlington to the east.

Dartmoor National Park covers an area of 368 square miles — the largest and wildest area of open country in southern England. Throughout the year Dartmoor is an exceptionally beautiful place to visit, with deep wooded gorges, beautiful lake-like reservoirs and tumbling rocky rivers. Exmoor National Park encompasses some of Devon and Somerset’s finest and most scenic landscapes, celebrated for their natural beauty and tranquillity. Exmoor is characterized by its gently rolling hills often crowned with heather moorland dipping into deep wooded valleys or combes as they are known locally, carved by Exmoor’s many rivers and tributaries. Exmoor’s northern edge is defined by its dramatic high coastal cliffs.

The Lake District in Cumbria in north-west England is the largest of the English National Parks, covering some 2, 292 square kilometres. It includes Scafell Pike — its highest mountain, Wastwater — its deepest lake and thriving communities like Keswick and Bowness-on-Windermere. The Norfolk and Suffolk Broads is Britain’s largest protected wetland and third largest inland waterway, with the status of a national park. It’s also home to some of the rarest plants and animals in the UK. The Broads Authority was set up in 1989, with responsibility for conservation, planning, recreation and waterways.

The North York Moors National Park is one of the most stunning landscapes in the country. . The great variety of landscapes in the North York Moors is what truly makes it unique and gives it a character which so many people can enjoy. . All around are the signs of past generations, historic abbeys, embattled castles, churches, crosses, ancient routes. The New Forest National Park was created in March 2005 and the New Forest National Park Authority took up its full powers in April 2006. It is the eighth national park in England, the first in the south-east of England and the first to be created for nearly 50 years. The National Park lies mainly in south-west Hampshire – from east of the Avon Valley to Southampton Water and from the Solent coast to the edge of the Wiltshire chalk downs.

Northumberland National Park is the northernmost national park in England. It covers an area of more than 1030 km² between the Scottish Border in the north to just south of Hadrian’s Wall. It is one of the least populated and least visited of the National Parks. The park lies entirely within Northumberland , covering about a quarter of the county. The South Downs is one of the four areas of chalk downland in southern England. They extend from the eastern side of Hampshire through Sussex, culminating in the cliffs at Beachy Head. Two areas of the Downs have been designated Areas of Outstanding Natural Beauty (AONB); there are many Sites of Special Scientific Interest; and much of the Downs will be included in the future South Downs National Park.

Protected Areas in Wales The importance of Wales’ iconic natural beauty to the country’s wealth, health and well-being has been legally acknowledged since 1949. The National Parks and Access to the Countryside Act designated 3 National Parks in Wales and set up what evolved into the Countryside Council for Wales. Moreover, there are five AONBs in Wales spread across the country, including a range of different landscapes.

Brecon Beacons Natural Park is a beautiful part of Wales, with traditional market towns, stunning landscape, canal paths, castles and plenty of family attractions. The scenery here is both beautiful and diverse — rolling countryside and valleys, wide open spaces to the wild beauty of the waterfalls and caves. Pembrokeshire lies at the south west extreme of Wales and is surrounded on three sides by the sea. Pembrokeshire’s marine and terrestrial environments are strongly influenced by the North Atlantic Drift (an arm of the Gulf Stream). . Pembrokeshire is internationally important for many of its coastal, marine and lowland heath habitats, and of national importance for other habitats such as its ancient, semi-natural oak woodland.

The Park covers 2, 132 square km (823 square miles) and stretches from Cardigan Bay’s High Water Mark in the west, to the Conwy Valley in the east and from the River Dyfi and its estuary in the south to the coast of Conwy Bay as far as Conwy in the north. The Snowdonia National Park takes its name from Snowdon which, at 1085 m (3, 560 feet), is the highest peak in Wales and England. Apart from the beauty and charm of its high mountains, Snowdonia has inspiring natural and semi-natural habitats. It is a delightfully varied landscape of steep river gorges, waterfalls, passes and green valleys. Snowdonia National Park was established in 1951 and is the second largest of the 11 National Parks in England and Wales.

Protected Areas in Scotland The Cairngorms National Park is Britain’s largest National Park. It It is 3800 sq kilometres in area, 40% larger than the Lake District and twice the size of Loch Lomond and the Trossachs. 4 of Scotland’s 5 highest mountains are within the Park, there are 52 summit over 900 metres. The land above 600 metres — known as the ‘montane zone’ — is the largest area of arctic mountain landscape in the British isles. The Cairngorms contains the finest collection of different landforms outside arctic Canada — from granite tors to heavings and leavings from Ice Age glaciers. The Loch Lomond&Trossachs National Park encompasses around 720 sq miles (1, 865 sq km) of some of the finest scenery in Scotland. There are 20 Munros (mountains above 3, 000 ft) in the Park and the highest is Ben More at 1, 174 m. There are 19 Corbetts (mountains between 2, 500 ft and 3, 000 ft). There are 22 larger lochs, with numerous smaller lochs and lochans. About 50 rivers and large burns.