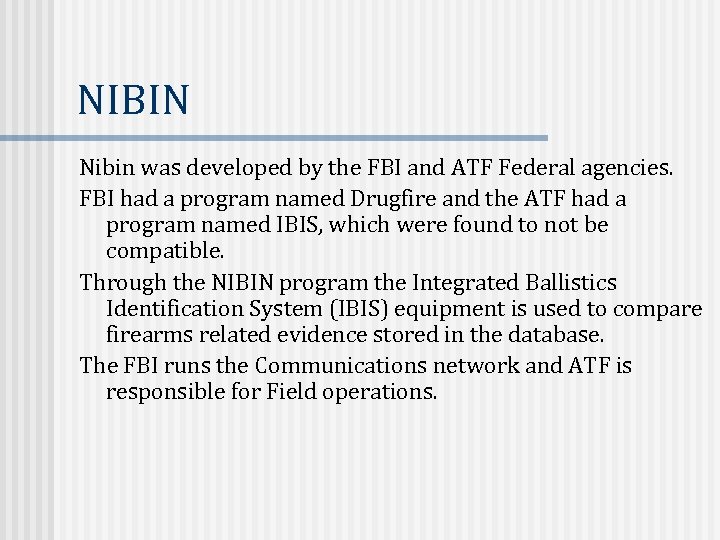 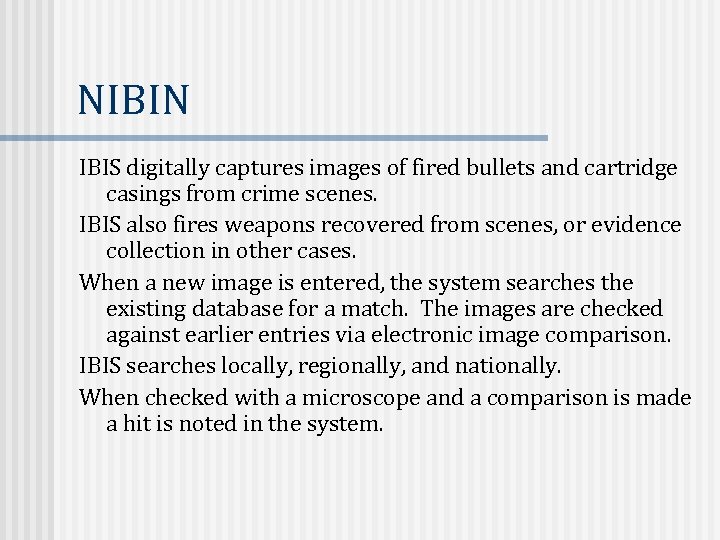 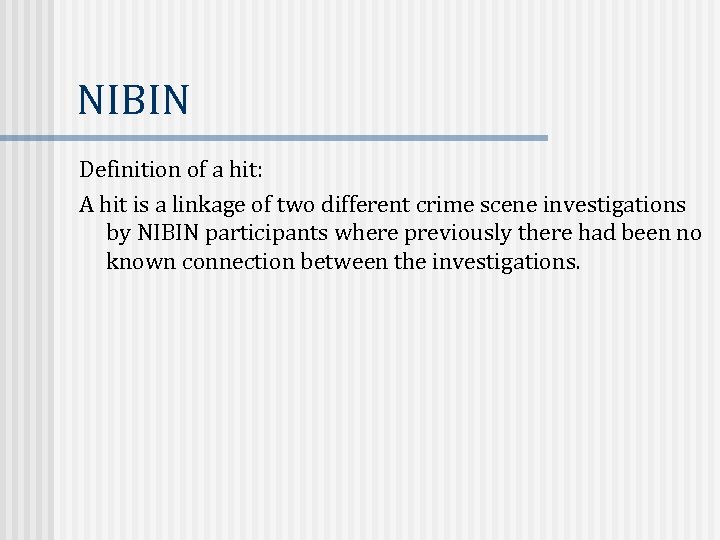 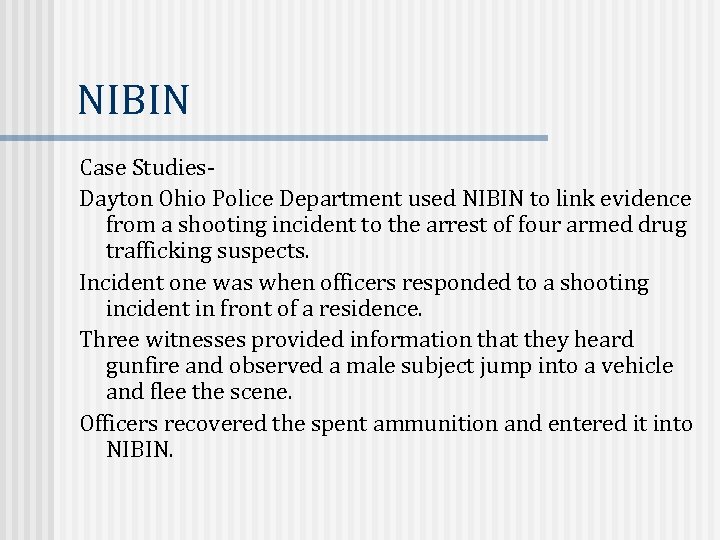 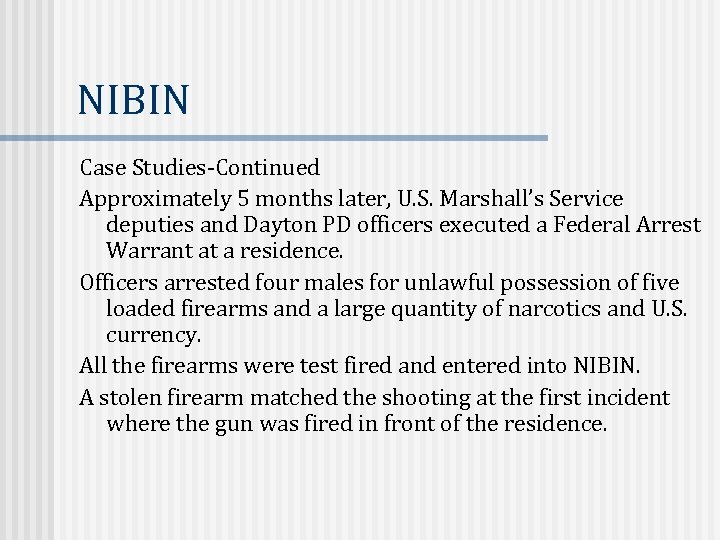 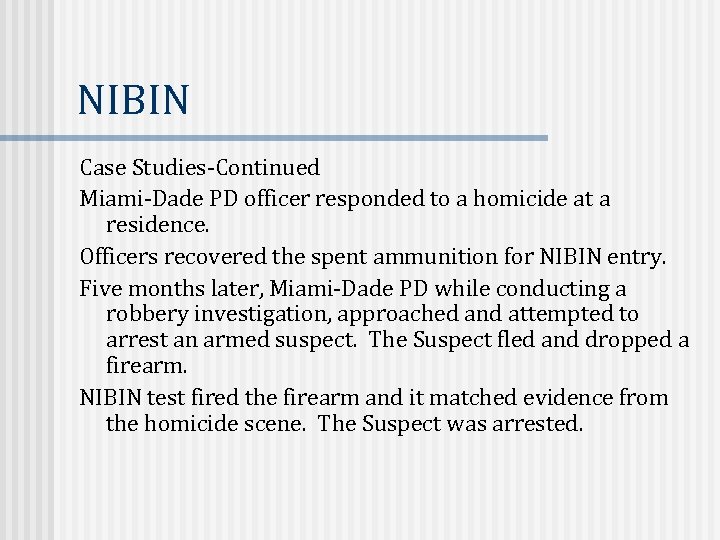 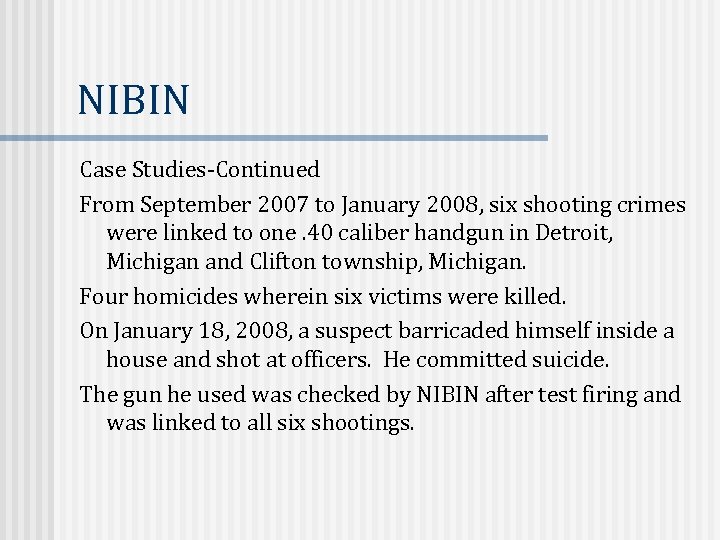 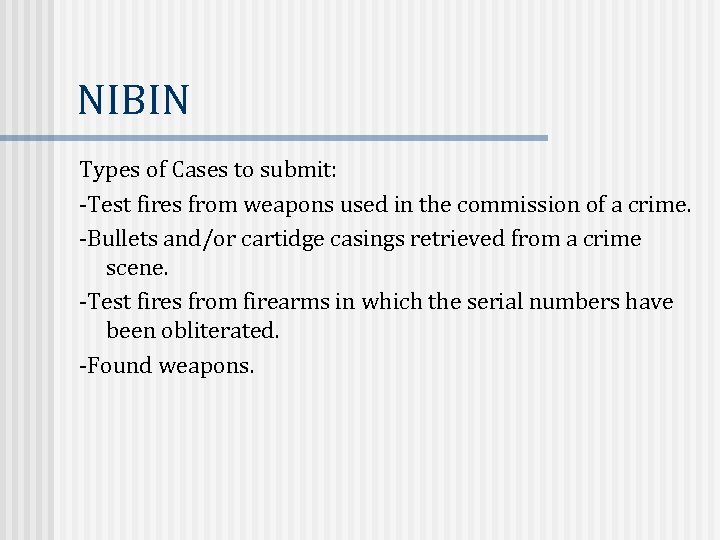 NIBIN Nibin was developed by the FBI and ATF Federal agencies. FBI had a program named Drugfire and the ATF had a program named IBIS, which were found to not be compatible. Through the NIBIN program the Integrated Ballistics Identification System (IBIS) equipment is used to compare firearms related evidence stored in the database. The FBI runs the Communications network and ATF is responsible for Field operations.

NIBIN IBIS digitally captures images of fired bullets and cartridge casings from crime scenes. IBIS also fires weapons recovered from scenes, or evidence collection in other cases. When a new image is entered, the system searches the existing database for a match. The images are checked against earlier entries via electronic image comparison. IBIS searches locally, regionally, and nationally. When checked with a microscope and a comparison is made a hit is noted in the system.

NIBIN Definition of a hit: A hit is a linkage of two different crime scene investigations by NIBIN participants where previously there had been no known connection between the investigations.

NIBIN Case Studies. Dayton Ohio Police Department used NIBIN to link evidence from a shooting incident to the arrest of four armed drug trafficking suspects. Incident one was when officers responded to a shooting incident in front of a residence. Three witnesses provided information that they heard gunfire and observed a male subject jump into a vehicle and flee the scene. Officers recovered the spent ammunition and entered it into NIBIN.

NIBIN Case Studies-Continued Approximately 5 months later, U. S. Marshall’s Service deputies and Dayton PD officers executed a Federal Arrest Warrant at a residence. Officers arrested four males for unlawful possession of five loaded firearms and a large quantity of narcotics and U. S. currency. All the firearms were test fired and entered into NIBIN. A stolen firearm matched the shooting at the first incident where the gun was fired in front of the residence.

NIBIN Case Studies-Continued Miami-Dade PD officer responded to a homicide at a residence. Officers recovered the spent ammunition for NIBIN entry. Five months later, Miami-Dade PD while conducting a robbery investigation, approached and attempted to arrest an armed suspect. The Suspect fled and dropped a firearm. NIBIN test fired the firearm and it matched evidence from the homicide scene. The Suspect was arrested.

NIBIN Case Studies-Continued From September 2007 to January 2008, six shooting crimes were linked to one. 40 caliber handgun in Detroit, Michigan and Clifton township, Michigan. Four homicides wherein six victims were killed. On January 18, 2008, a suspect barricaded himself inside a house and shot at officers. He committed suicide. The gun he used was checked by NIBIN after test firing and was linked to all six shootings.

NIBIN Types of Cases to submit: -Test fires from weapons used in the commission of a crime. -Bullets and/or cartidge casings retrieved from a crime scene. -Test fires from firearms in which the serial numbers have been obliterated. -Found weapons.