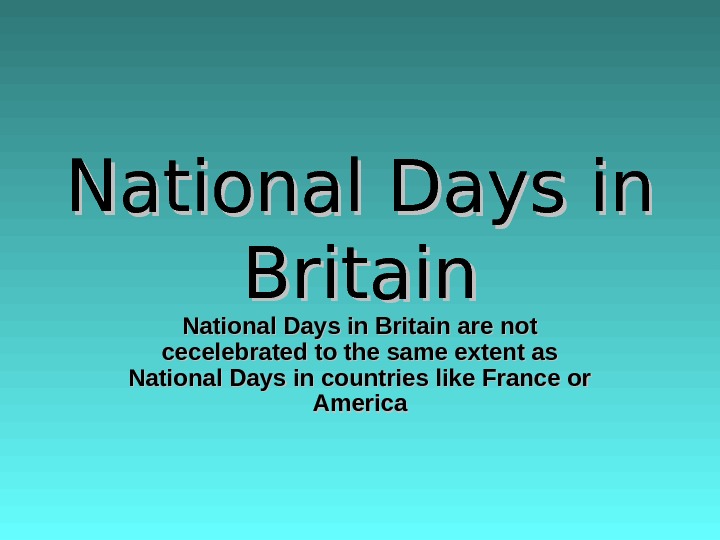 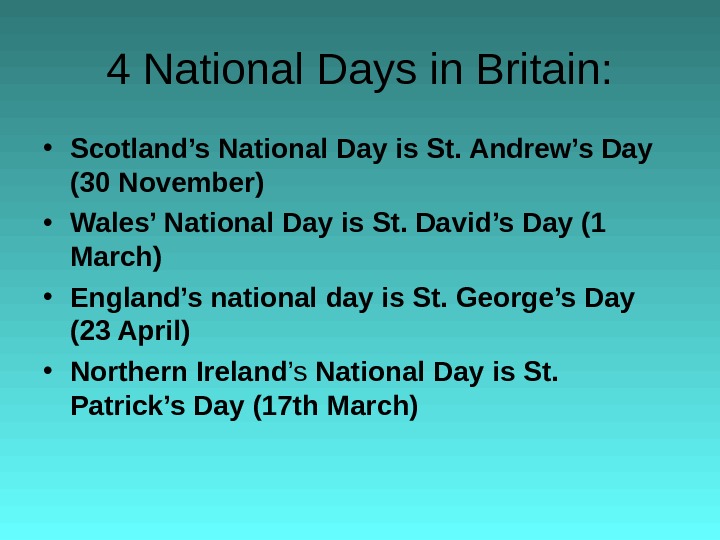 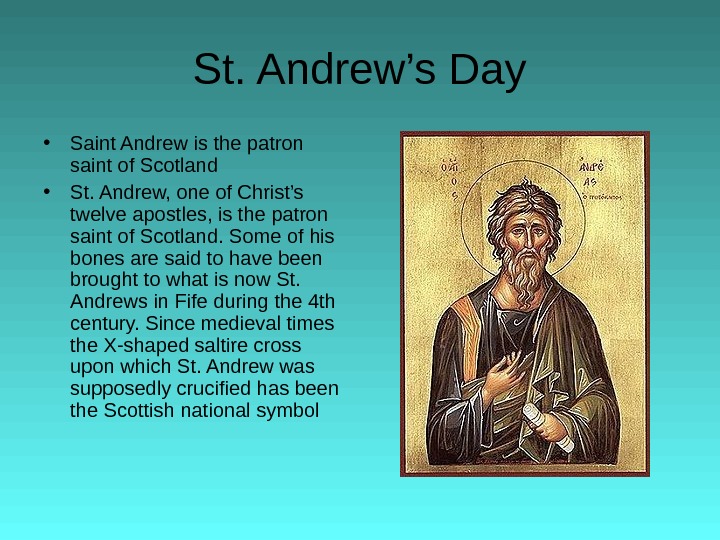 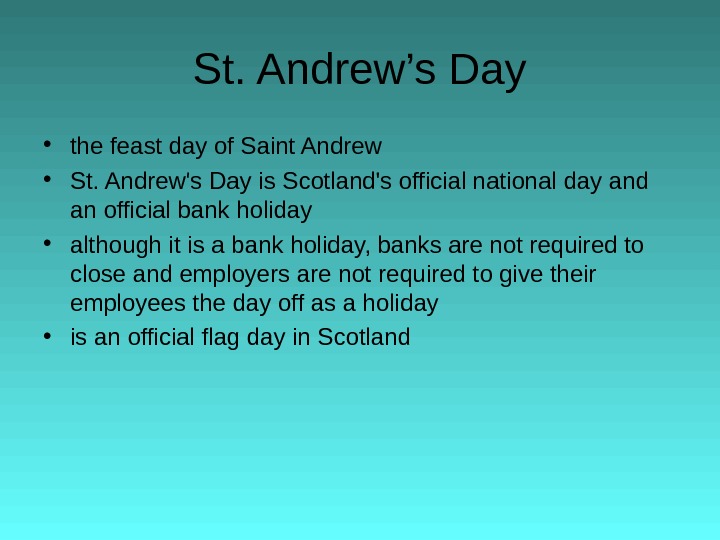 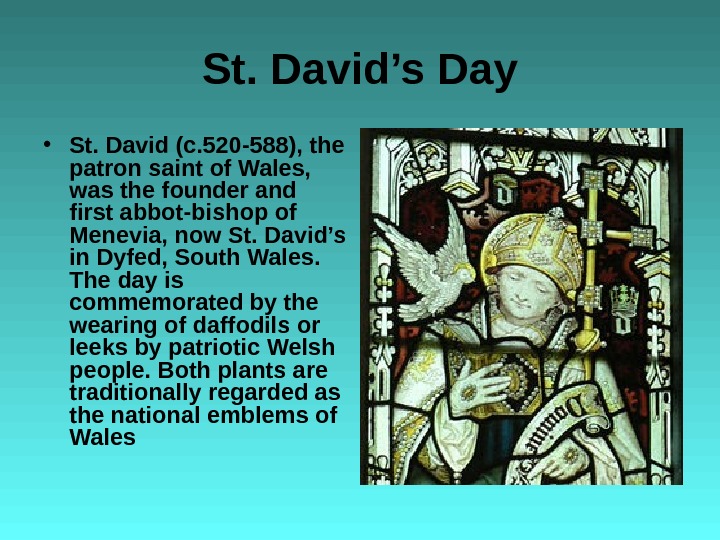 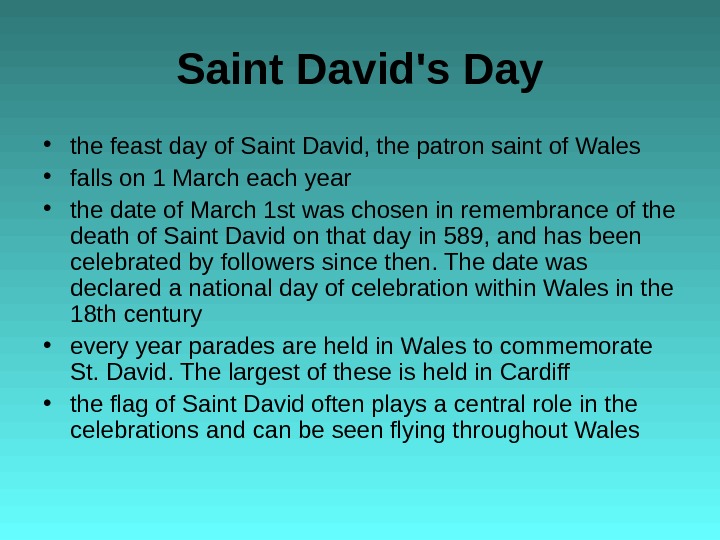 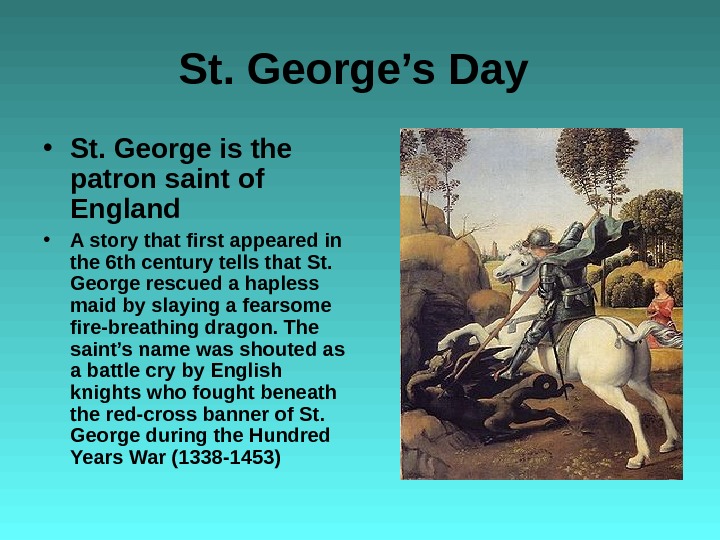 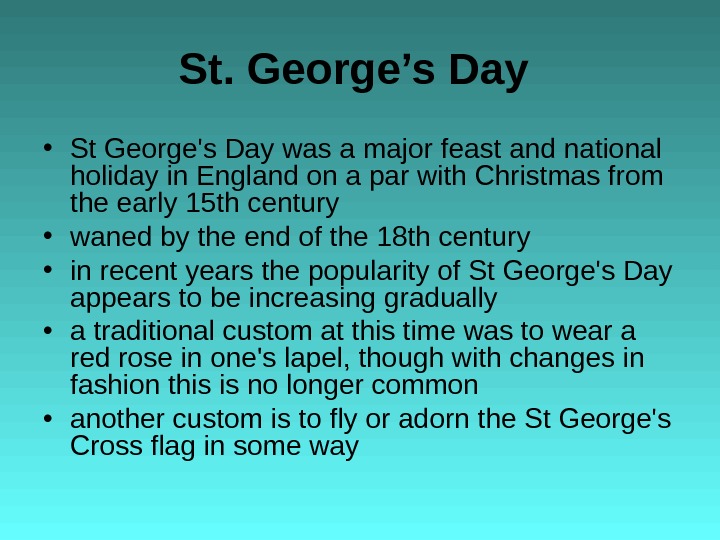 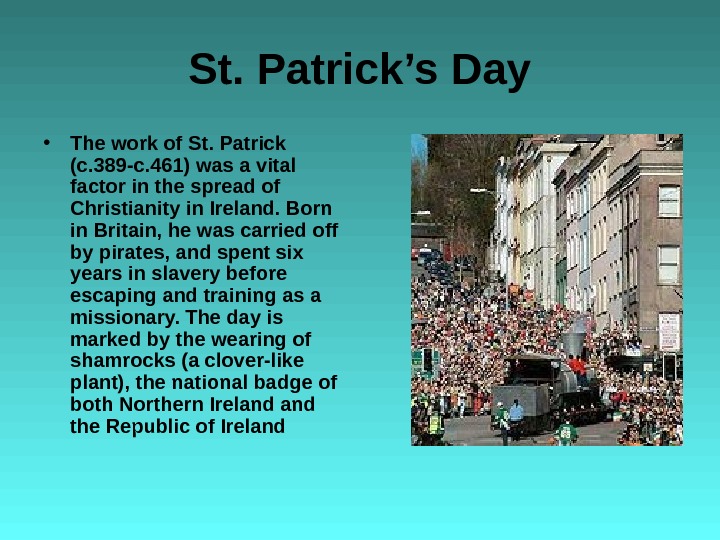 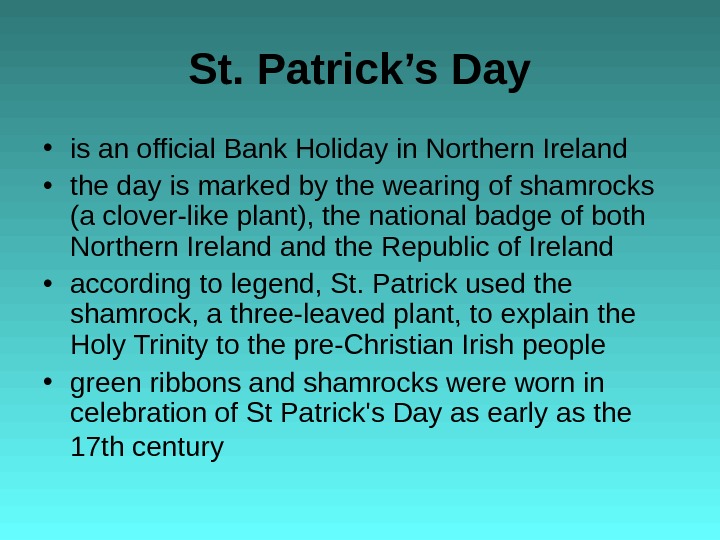 St. David’s Day • St. David (c. 520 -588), the patron saint of Wales, was the founder and first abbot-bishop of Menevia, now St. David’s in Dyfed, South Wales. The day is commemorated by the wearing of daffodils or leeks by patriotic Welsh people. Both plants are traditionally regarded as the national emblems of Wales

Saint David’s Day • the feast day of Saint David, the patron saint of Wales • falls on 1 March each year • the date of March 1 st was chosen in remembrance of the death of Saint David on that day in 589, and has been celebrated by followers since then. The date was declared a national day of celebration within Wales in the 18 th century • every year parades are held in Wales to commemorate St. David. The largest of these is held in Cardiff • the flag of Saint David often plays a central role in the celebrations and can be seen flying throughout Wales

St. George’s Day • St. George is the patron saint of England • A story that first appeared in the 6 th century tells that St. George rescued a hapless maid by slaying a fearsome fire-breathing dragon. The saint’s name was shouted as a battle cry by English knights who fought beneath the red-cross banner of St. George during the Hundred Years War (1338 -1453)

St. George’s Day • St George’s Day was a major feast and national holiday in England on a par with Christmas from the early 15 th century • waned by the end of the 18 th century • in recent years the popularity of St George’s Day appears to be increasing gradually • a traditional custom at this time was to wear a red rose in one’s lapel, though with changes in fashion this is no longer common • another custom is to fly or adorn the St George’s Cross flag in some way

St. Patrick’s Day • The work of St. Patrick (c. 389 -c. 461) was a vital factor in the spread of Christianity in Ireland. Born in Britain, he was carried off by pirates, and spent six years in slavery before escaping and training as a missionary. The day is marked by the wearing of shamrocks (a clover-like plant), the national badge of both Northern Ireland the Republic of Ireland

St. Patrick’s Day • is an official Bank Holiday in Northern Ireland • the day is marked by the wearing of shamrocks (a clover-like plant), the national badge of both Northern Ireland the Republic of Ireland • according to legend, St. Patrick used the shamrock, a three-leaved plant, to explain the Holy Trinity to the pre-Christian Irish people • green ribbons and shamrocks were worn in celebration of St Patrick’s Day as early as the 17 th century