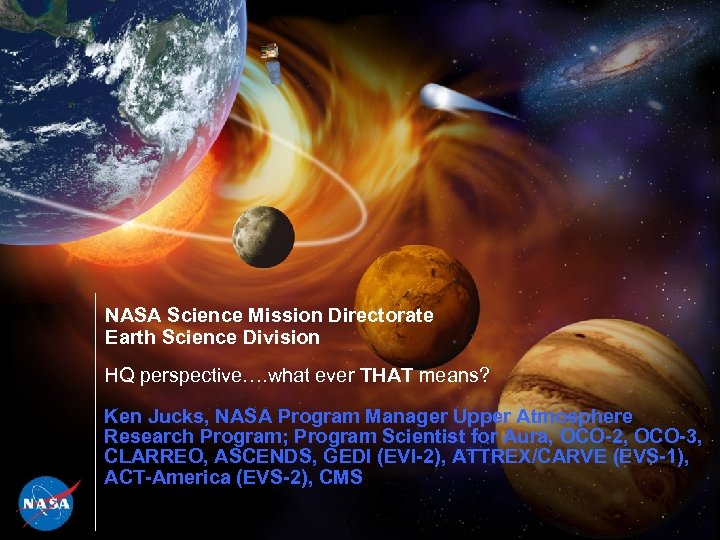 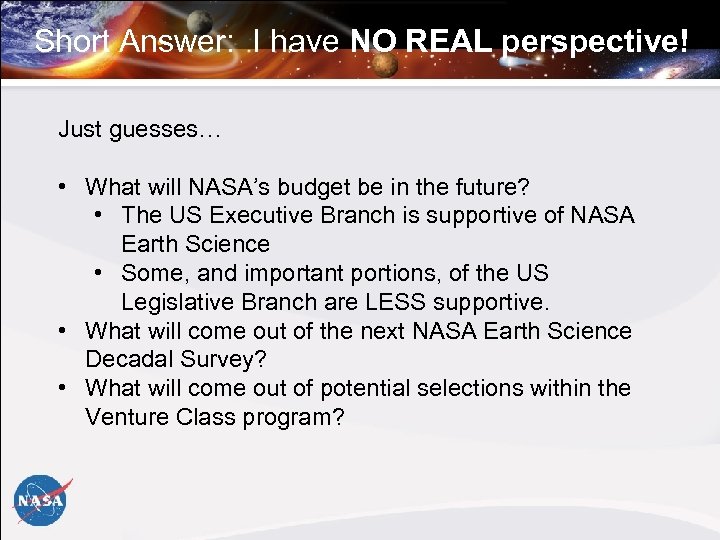 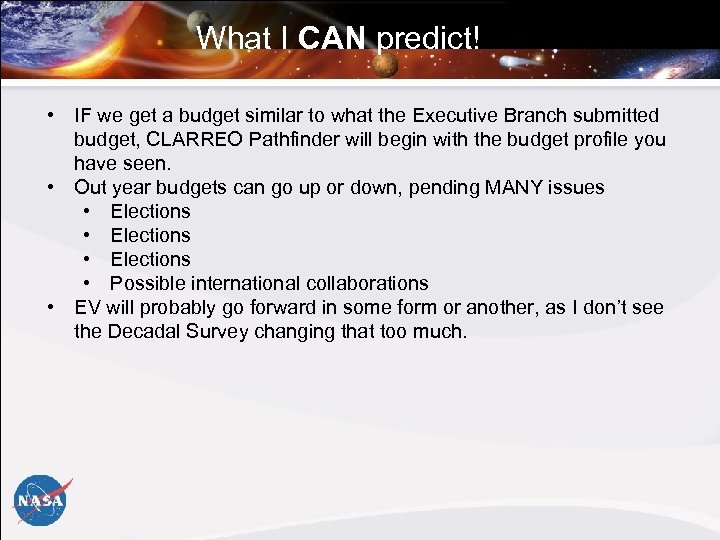 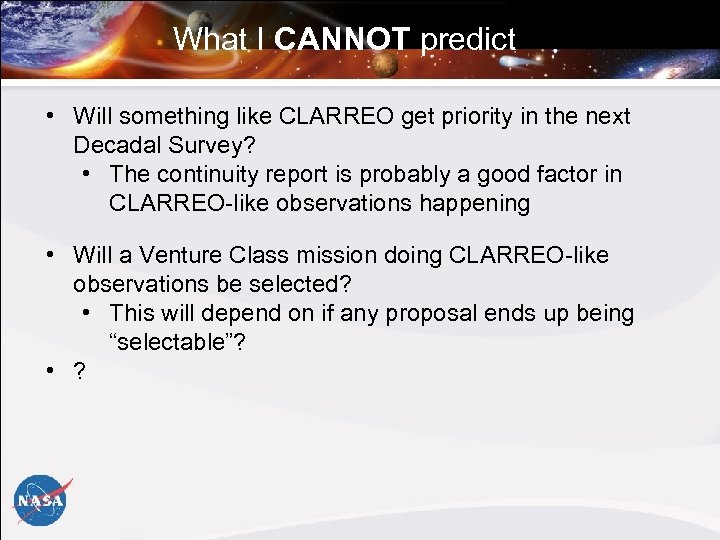 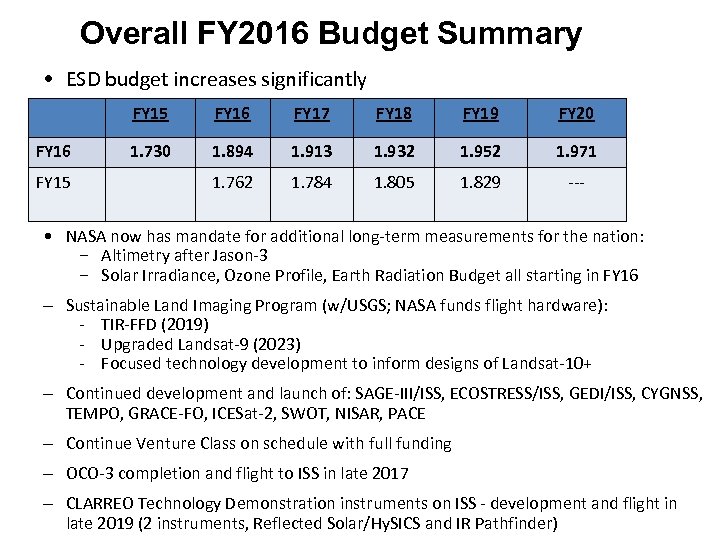 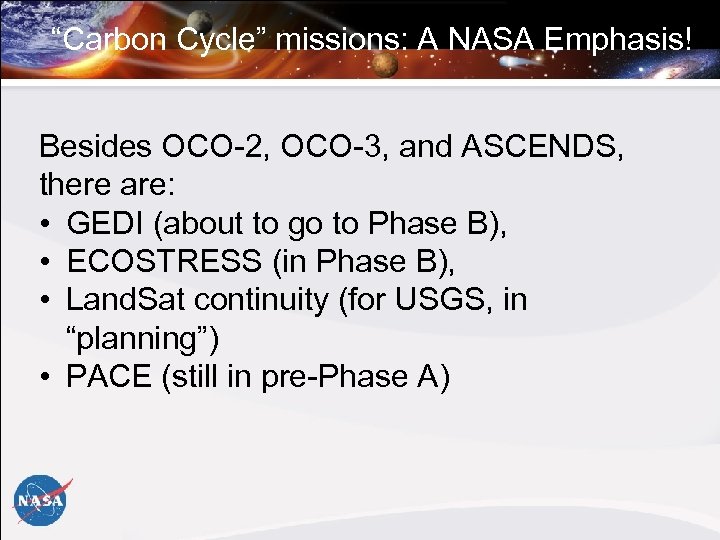 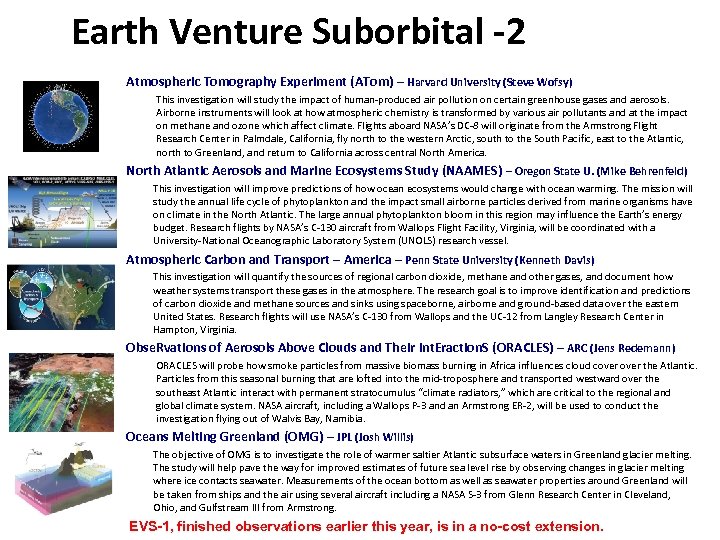 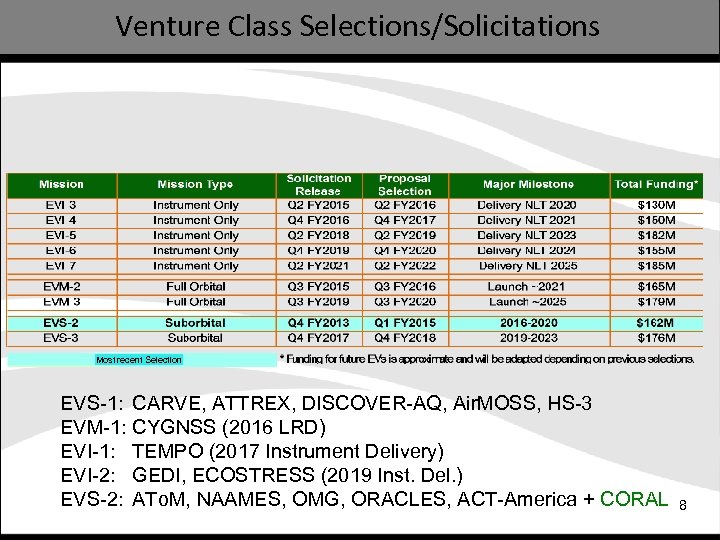 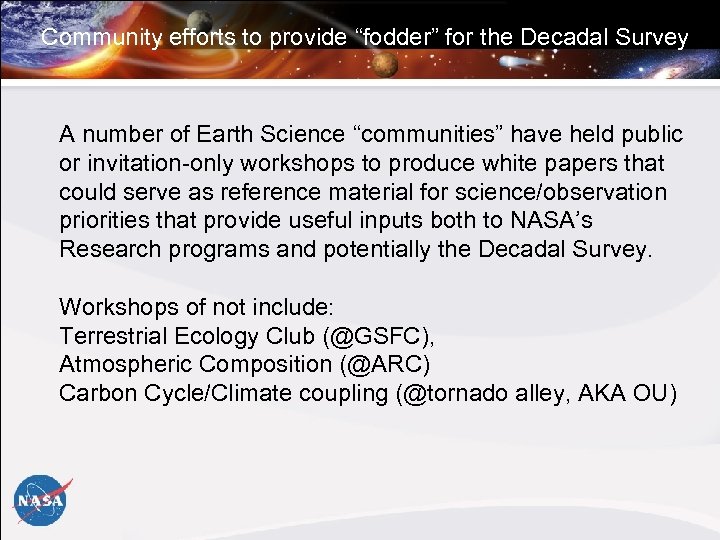 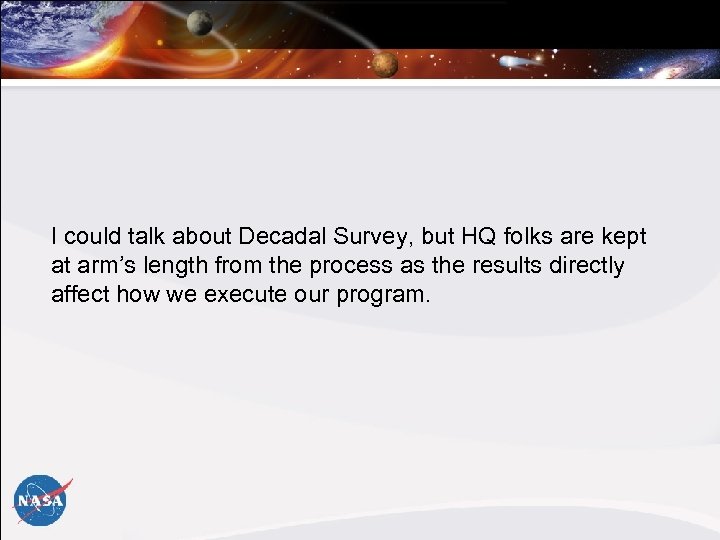 What I CAN predict! • IF we get a budget similar to what the Executive Branch submitted budget, CLARREO Pathfinder will begin with the budget profile you have seen. • Out year budgets can go up or down, pending MANY issues • Elections • Possible international collaborations • EV will probably go forward in some form or another, as I don’t see the Decadal Survey changing that too much.

Earth Venture Suborbital -2 Atmospheric Tomography Experiment (ATom) – Harvard University (Steve Wofsy) This investigation will study the impact of human-produced air pollution on certain greenhouse gases and aerosols. Airborne instruments will look at how atmospheric chemistry is transformed by various air pollutants and at the impact on methane and ozone which affect climate. Flights aboard NASA’s DC-8 will originate from the Armstrong Flight Research Center in Palmdale, California, fly north to the western Arctic, south to the South Pacific, east to the Atlantic, north to Greenland, and return to California across central North America. North Atlantic Aerosols and Marine Ecosystems Study (NAAMES) – Oregon State U. (Mike Behrenfeld) This investigation will improve predictions of how ocean ecosystems would change with ocean warming. The mission will study the annual life cycle of phytoplankton and the impact small airborne particles derived from marine organisms have on climate in the North Atlantic. The large annual phytoplankton bloom in this region may influence the Earth’s energy budget. Research flights by NASA’s C-130 aircraft from Wallops Flight Facility, Virginia, will be coordinated with a University-National Oceanographic Laboratory System (UNOLS) research vessel. Atmospheric Carbon and Transport – America – Penn State University (Kenneth Davis) This investigation will quantify the sources of regional carbon dioxide, methane and other gases, and document how weather systems transport these gases in the atmosphere. The research goal is to improve identification and predictions of carbon dioxide and methane sources and sinks using spaceborne, airborne and ground-based data over the eastern United States. Research flights will use NASA’s C-130 from Wallops and the UC-12 from Langley Research Center in Hampton, Virginia. Obse. Rvations of Aerosols Above Clouds and Their Int. Eraction. S (ORACLES) – ARC (Jens Redemann) ORACLES will probe how smoke particles from massive biomass burning in Africa influences cloud cover the Atlantic. Particles from this seasonal burning that are lofted into the mid-troposphere and transported westward over the southeast Atlantic interact with permanent stratocumulus “climate radiators, ” which are critical to the regional and global climate system. NASA aircraft, including a Wallops P-3 and an Armstrong ER-2, will be used to conduct the investigation flying out of Walvis Bay, Namibia. Oceans Melting Greenland (OMG) – JPL (Josh Willis) The objective of OMG is to investigate the role of warmer saltier Atlantic subsurface waters in Greenland glacier melting. The study will help pave the way for improved estimates of future sea level rise by observing changes in glacier melting where ice contacts seawater. Measurements of the ocean bottom as well as seawater properties around Greenland will be taken from ships and the air using several aircraft including a NASA S-3 from Glenn Research Center in Cleveland, Ohio, and Gulfstream III from Armstrong. EVS-1, finished observations earlier this year, is in a no-cost extension.

Community efforts to provide “fodder” for the Decadal Survey A number of Earth Science “communities” have held public or invitation-only workshops to produce white papers that could serve as reference material for science/observation priorities that provide useful inputs both to NASA’s Research programs and potentially the Decadal Survey. Workshops of not include: Terrestrial Ecology Club (@GSFC), Atmospheric Composition (@ARC) Carbon Cycle/Climate coupling (@tornado alley, AKA OU)

I could talk about Decadal Survey, but HQ folks are kept at arm’s length from the process as the results directly affect how we execute our program.