n I Hassan Kitunzi was born in the 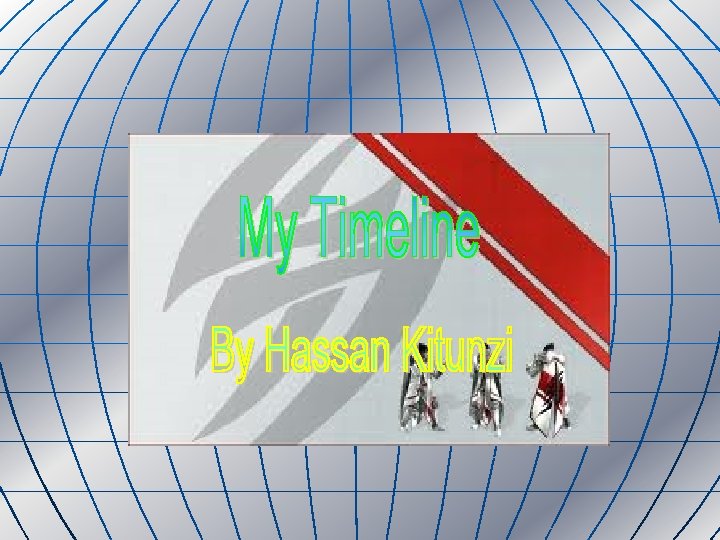 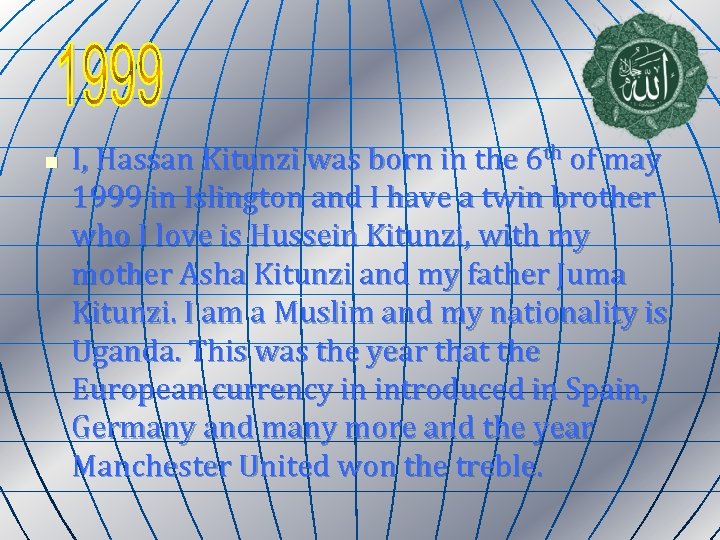 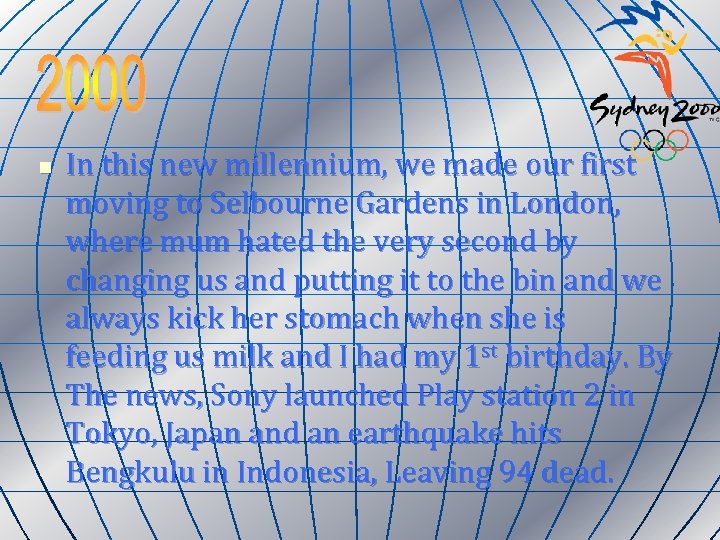 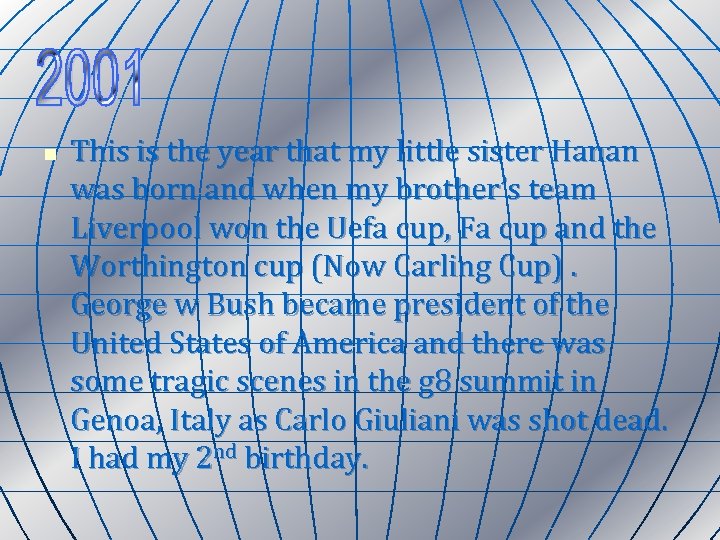 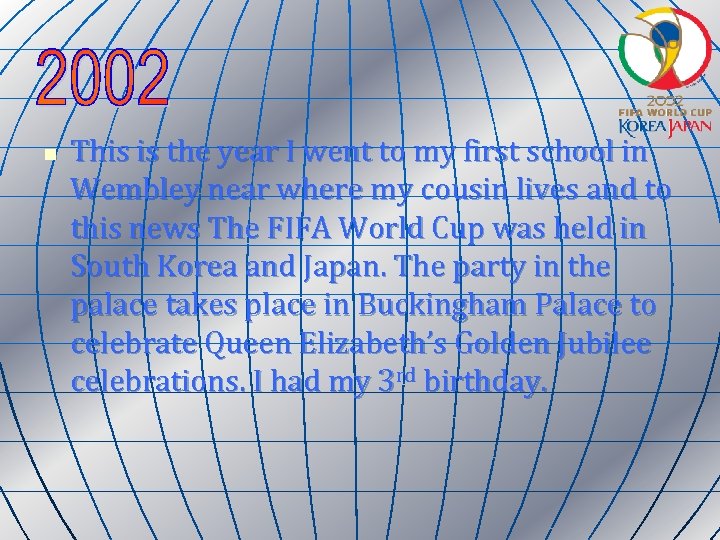 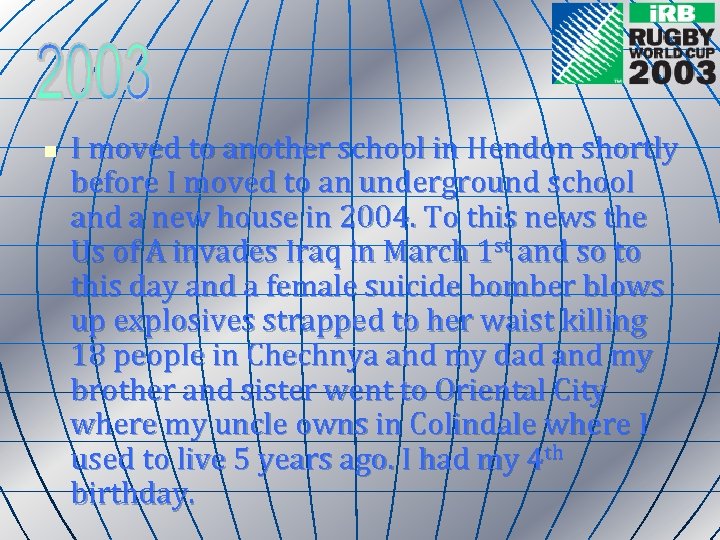 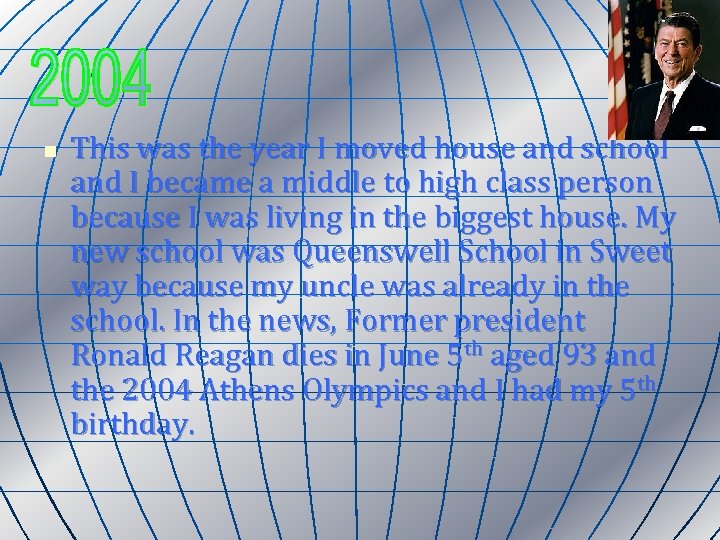 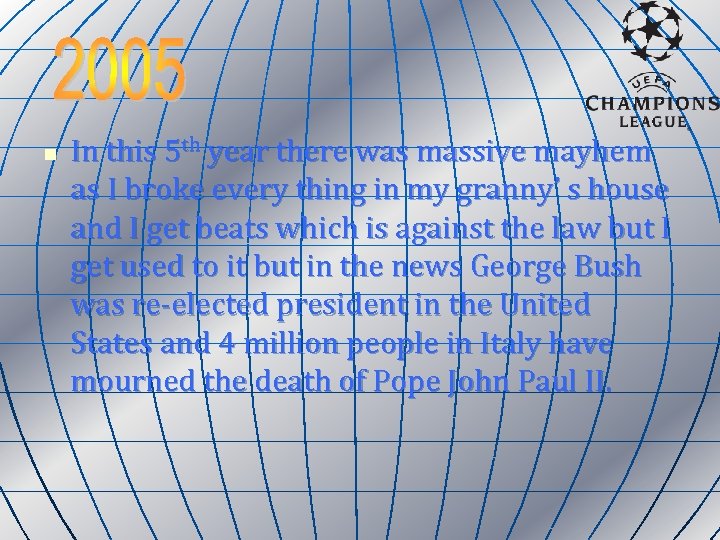 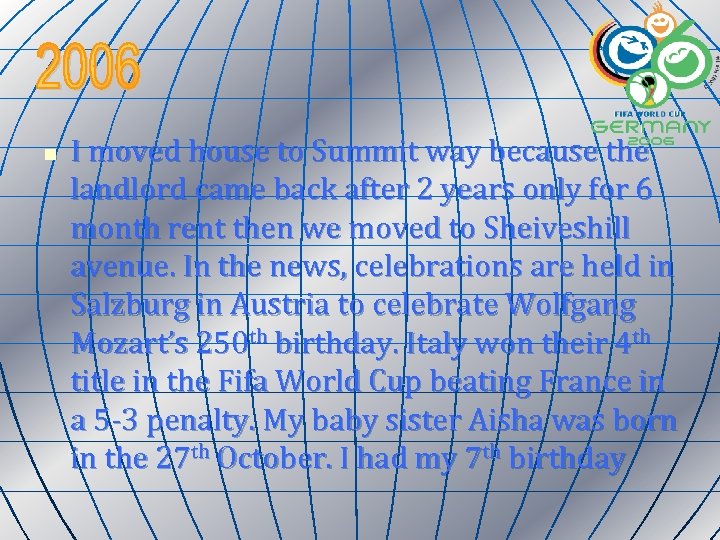 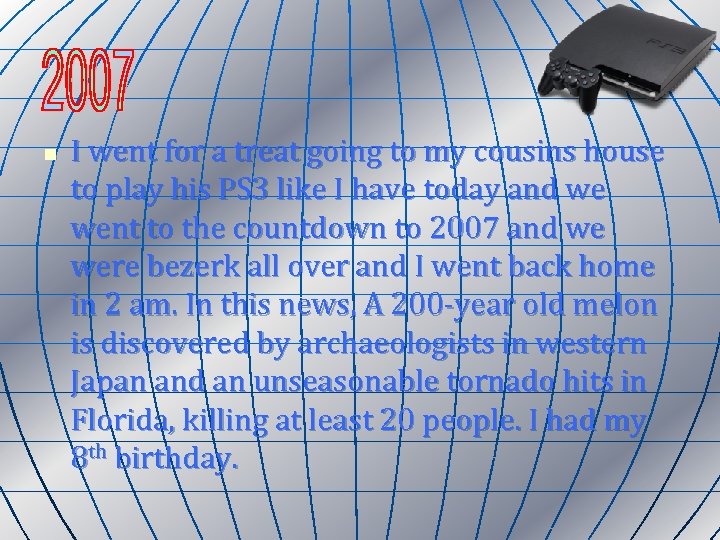 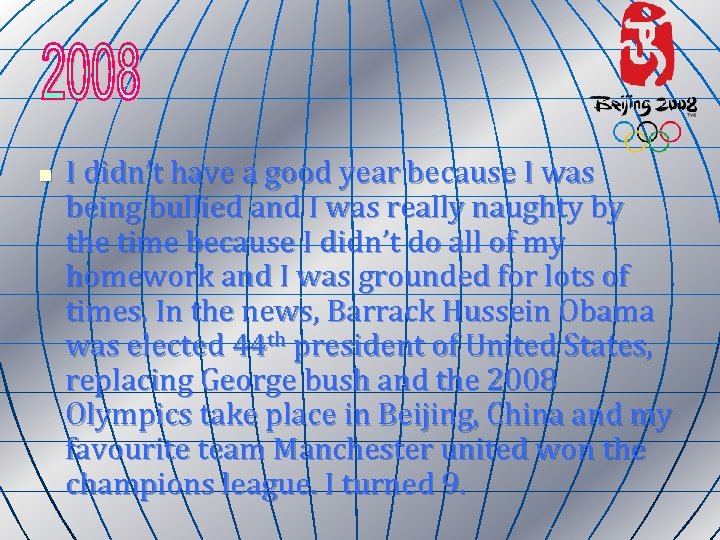 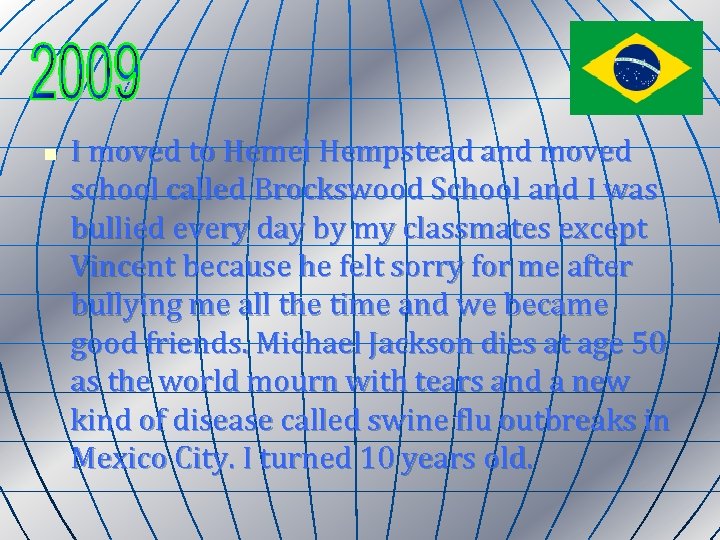 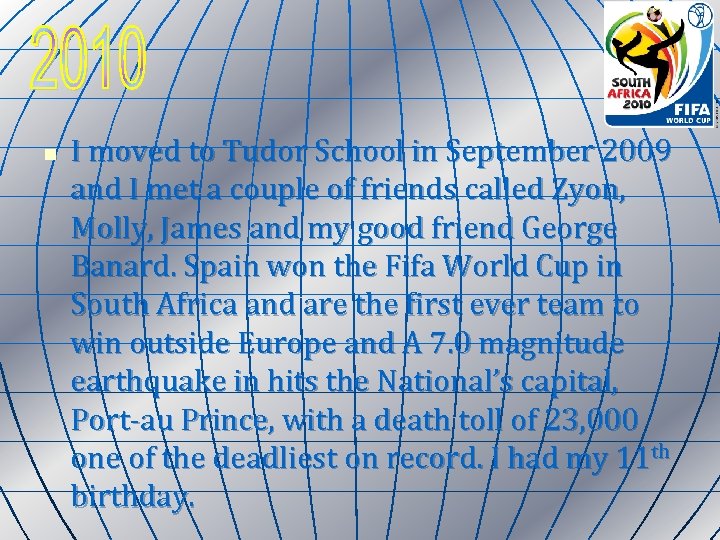 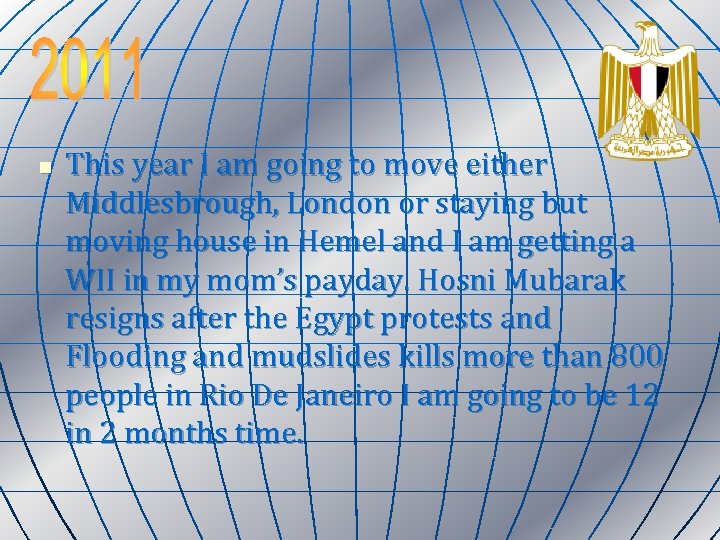 Скачать презентацию n I Hassan Kitunzi was born in the

n I, Hassan Kitunzi was born in the 6 th of may 1999 in Islington and I have a twin brother who I love is Hussein Kitunzi, with my mother Asha Kitunzi and my father Juma Kitunzi. I am a Muslim and my nationality is Uganda. This was the year that the European currency in introduced in Spain, Germany and many more and the year Manchester United won the treble.

n In this new millennium, we made our first moving to Selbourne Gardens in London, where mum hated the very second by changing us and putting it to the bin and we always kick her stomach when she is feeding us milk and I had my 1 st birthday. By The news, Sony launched Play station 2 in Tokyo, Japan and an earthquake hits Bengkulu in Indonesia, Leaving 94 dead.

n This is the year that my little sister Hanan was born and when my brother’s team Liverpool won the Uefa cup, Fa cup and the Worthington cup (Now Carling Cup). George w Bush became president of the United States of America and there was some tragic scenes in the g 8 summit in Genoa, Italy as Carlo Giuliani was shot dead. I had my 2 nd birthday.

n This is the year I went to my first school in Wembley near where my cousin lives and to this news The FIFA World Cup was held in South Korea and Japan. The party in the palace takes place in Buckingham Palace to celebrate Queen Elizabeth’s Golden Jubilee celebrations. I had my 3 rd birthday.

n I moved to another school in Hendon shortly before I moved to an underground school and a new house in 2004. To this news the Us of A invades Iraq in March 1 st and so to this day and a female suicide bomber blows up explosives strapped to her waist killing 18 people in Chechnya and my dad and my brother and sister went to Oriental City where my uncle owns in Colindale where I used to live 5 years ago. I had my 4 th birthday.

n This was the year I moved house and school and I became a middle to high class person because I was living in the biggest house. My new school was Queenswell School in Sweet way because my uncle was already in the school. In the news, Former president Ronald Reagan dies in June 5 th aged 93 and the 2004 Athens Olympics and I had my 5 th birthday.

n In this 5 th year there was massive mayhem as I broke every thing in my granny’ s house and I get beats which is against the law but I get used to it but in the news George Bush was re-elected president in the United States and 4 million people in Italy have mourned the death of Pope John Paul II.

n I moved house to Summit way because the landlord came back after 2 years only for 6 month rent then we moved to Sheiveshill avenue. In the news, celebrations are held in Salzburg in Austria to celebrate Wolfgang Mozart’s 250 th birthday. Italy won their 4 th title in the Fifa World Cup beating France in a 5 -3 penalty. My baby sister Aisha was born in the 27 th October. I had my 7 th birthday

n I went for a treat going to my cousins house to play his PS 3 like I have today and we went to the countdown to 2007 and we were bezerk all over and I went back home in 2 am. In this news, A 200 -year old melon is discovered by archaeologists in western Japan and an unseasonable tornado hits in Florida, killing at least 20 people. I had my 8 th birthday.

n I didn’t have a good year because I was being bullied and I was really naughty by the time because I didn’t do all of my homework and I was grounded for lots of times. In the news, Barrack Hussein Obama was elected 44 th president of United States, replacing George bush and the 2008 Olympics take place in Beijing, China and my favourite team Manchester united won the champions league. I turned 9.

n I moved to Hemel Hempstead and moved school called Brockswood School and I was bullied every day by my classmates except Vincent because he felt sorry for me after bullying me all the time and we became good friends. Michael Jackson dies at age 50 as the world mourn with tears and a new kind of disease called swine flu outbreaks in Mexico City. I turned 10 years old.

n I moved to Tudor School in September 2009 and I met a couple of friends called Zyon, Molly, James and my good friend George Banard. Spain won the Fifa World Cup in South Africa and are the first ever team to win outside Europe and A 7. 0 magnitude earthquake in hits the National’s capital, Port-au Prince, with a death toll of 23, 000 one of the deadliest on record. I had my 11 th birthday.

n This year I am going to move either Middlesbrough, London or staying but moving house in Hemel and I am getting a WII in my mom’s payday. Hosni Mubarak resigns after the Egypt protests and Flooding and mudslides kills more than 800 people in Rio De Janeiro I am going to be 12 in 2 months time.