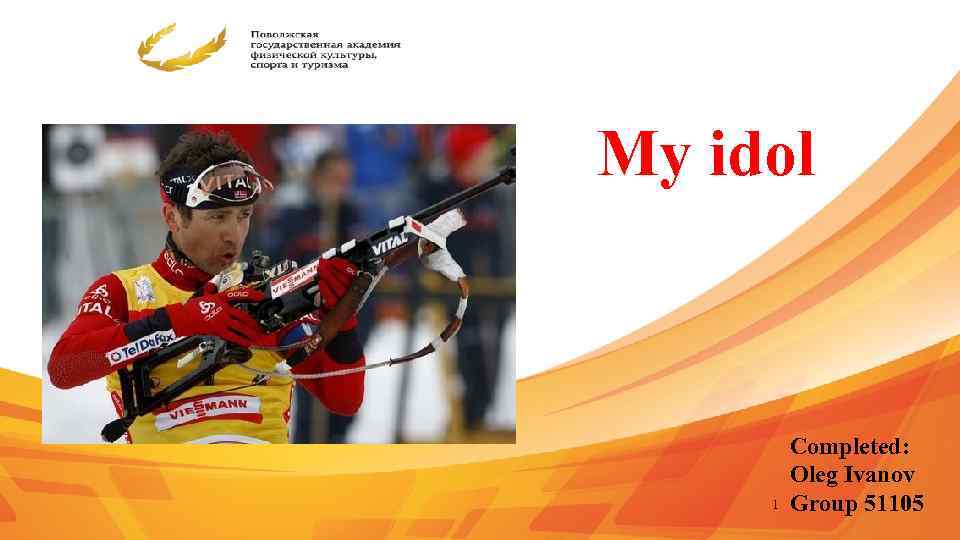 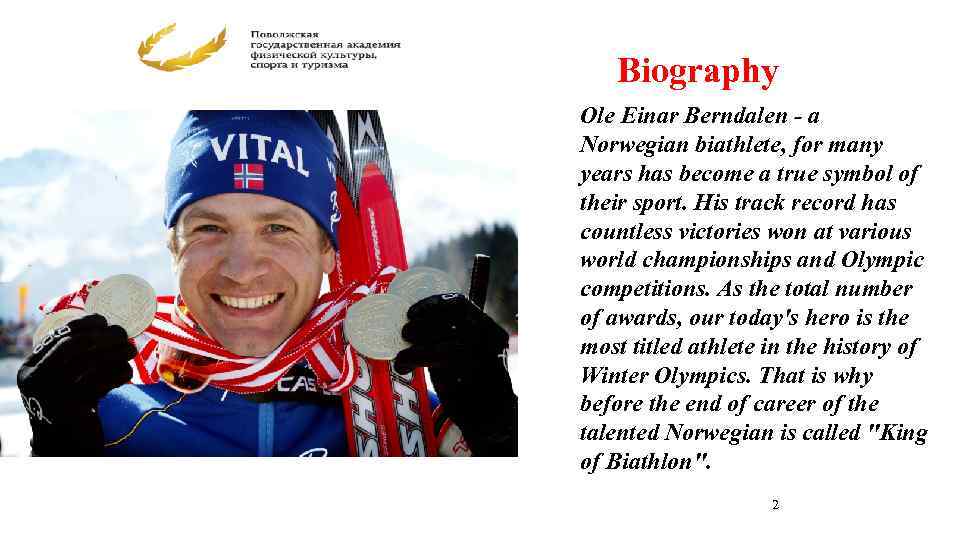 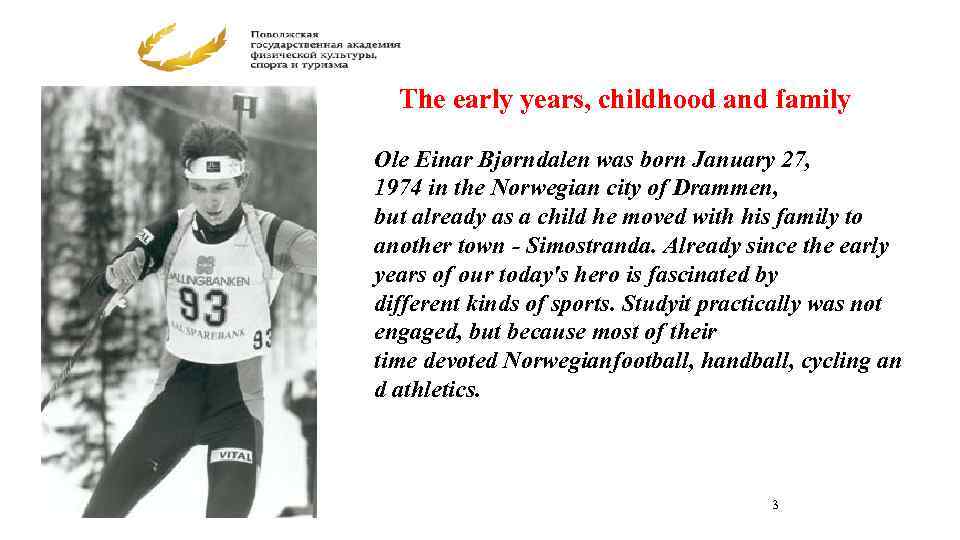 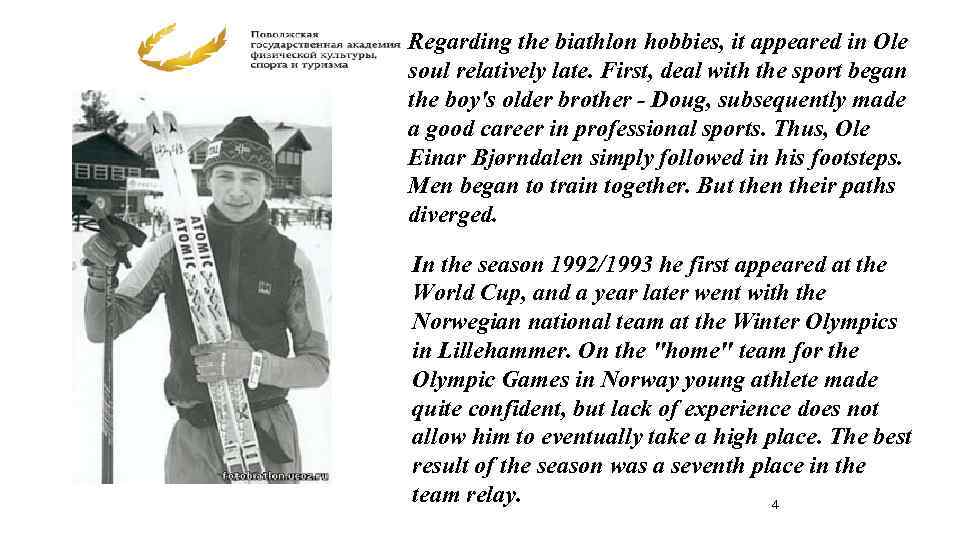 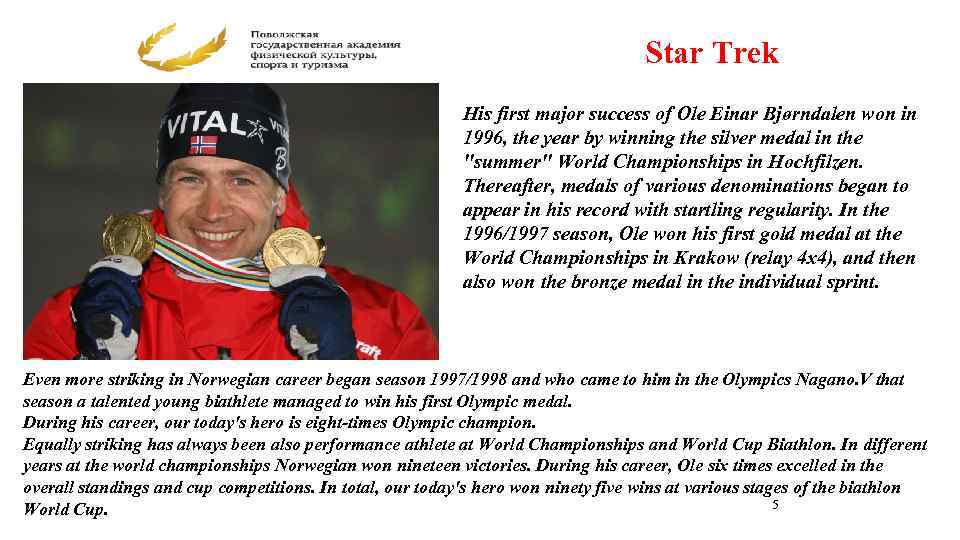 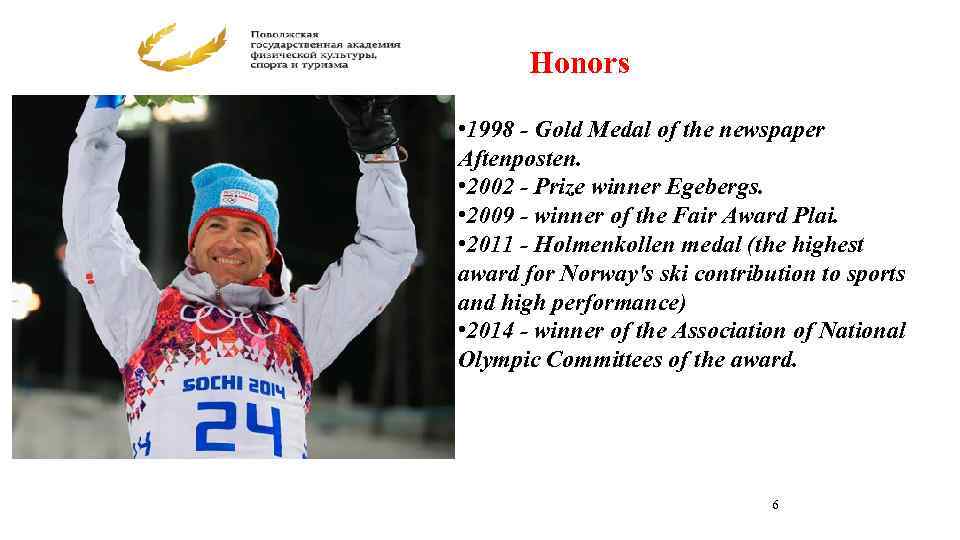 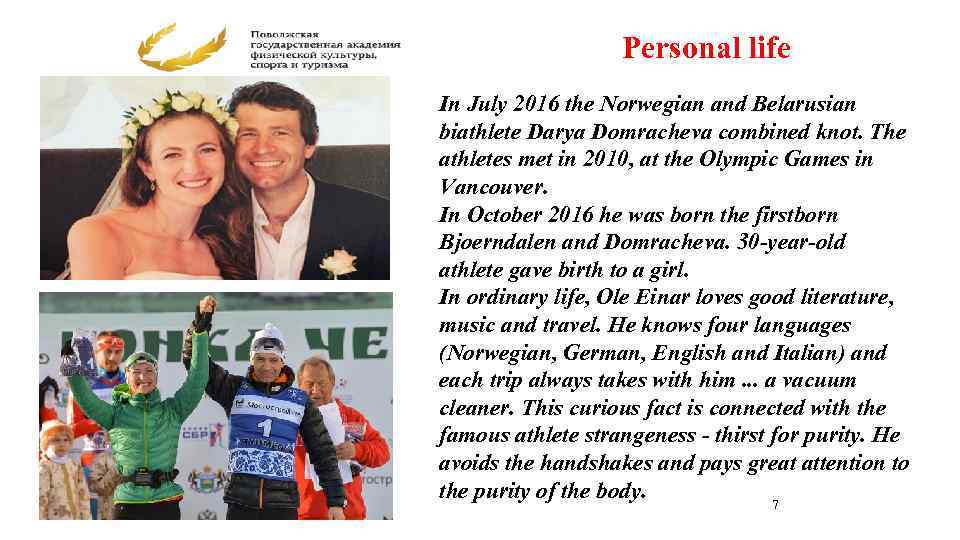 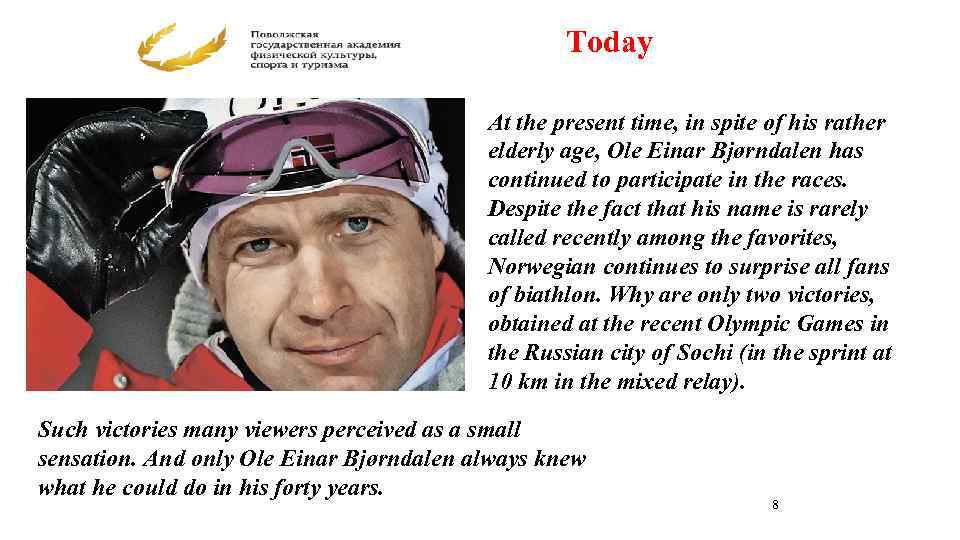 Biography Ole Einar Berndalen - a Norwegian biathlete, for many years has become a true symbol of their sport. His track record has countless victories won at various world championships and Olympic competitions. As the total number of awards, our today's hero is the most titled athlete in the history of Winter Olympics. That is why before the end of career of the talented Norwegian is called "King of Biathlon". 2

The early years, childhood and family Ole Einar Bjørndalen was born January 27, 1974 in the Norwegian city of Drammen, but already as a child he moved with his family to another town - Simostranda. Already since the early years of our today's hero is fascinated by different kinds of sports. Studyit practically was not engaged, but because most of their time devoted Norwegianfootball, handball, cycling an d athletics. 3

Regarding the biathlon hobbies, it appeared in Ole soul relatively late. First, deal with the sport began the boy's older brother - Doug, subsequently made a good career in professional sports. Thus, Ole Einar Bjørndalen simply followed in his footsteps. Men began to train together. But then their paths diverged. In the season 1992/1993 he first appeared at the World Cup, and a year later went with the Norwegian national team at the Winter Olympics in Lillehammer. On the "home" team for the Olympic Games in Norway young athlete made quite confident, but lack of experience does not allow him to eventually take a high place. The best result of the season was a seventh place in the team relay. 4

Star Trek His first major success of Ole Einar Bjørndalen won in 1996, the year by winning the silver medal in the "summer" World Championships in Hochfilzen. Thereafter, medals of various denominations began to appear in his record with startling regularity. In the 1996/1997 season, Ole won his first gold medal at the World Championships in Krakow (relay 4 x 4), and then also won the bronze medal in the individual sprint. Even more striking in Norwegian career began season 1997/1998 and who came to him in the Olympics Nagano. V that season a talented young biathlete managed to win his first Olympic medal. During his career, our today's hero is eight-times Olympic champion. Equally striking has always been also performance athlete at World Championships and World Cup Biathlon. In different years at the world championships Norwegian won nineteen victories. During his career, Ole six times excelled in the overall standings and cup competitions. In total, our today's hero won ninety five wins at various stages of the biathlon 5 World Cup.

Honors • 1998 - Gold Medal of the newspaper Aftenposten. • 2002 - Prize winner Egebergs. • 2009 - winner of the Fair Award Plai. • 2011 - Holmenkollen medal (the highest award for Norway's ski contribution to sports and high performance) • 2014 - winner of the Association of National Olympic Committees of the award. 6

Personal life In July 2016 the Norwegian and Belarusian biathlete Darya Domracheva combined knot. The athletes met in 2010, at the Olympic Games in Vancouver. In October 2016 he was born the firstborn Bjoerndalen and Domracheva. 30 -year-old athlete gave birth to a girl. In ordinary life, Ole Einar loves good literature, music and travel. He knows four languages (Norwegian, German, English and Italian) and each trip always takes with him. . . a vacuum cleaner. This curious fact is connected with the famous athlete strangeness - thirst for purity. He avoids the handshakes and pays great attention to the purity of the body. 7

Today At the present time, in spite of his rather elderly age, Ole Einar Bjørndalen has continued to participate in the races. Despite the fact that his name is rarely called recently among the favorites, Norwegian continues to surprise all fans of biathlon. Why are only two victories, obtained at the recent Olympic Games in the Russian city of Sochi (in the sprint at 10 km in the mixed relay). Such victories many viewers perceived as a small sensation. And only Ole Einar Bjørndalen always knew what he could do in his forty years. 8