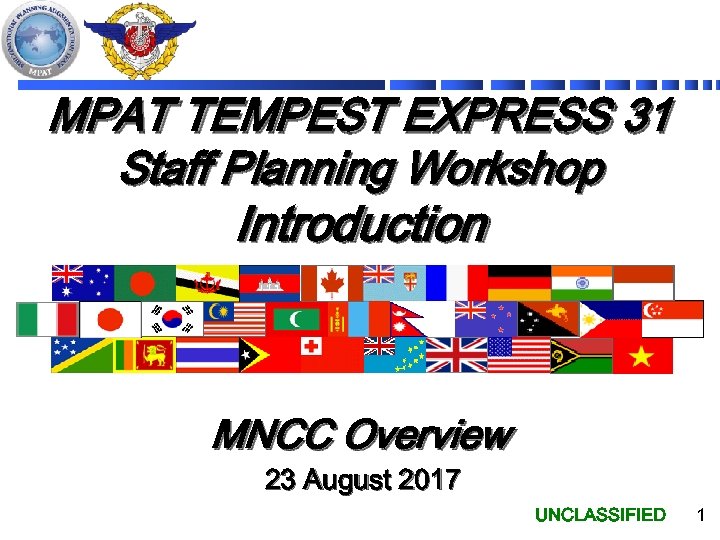 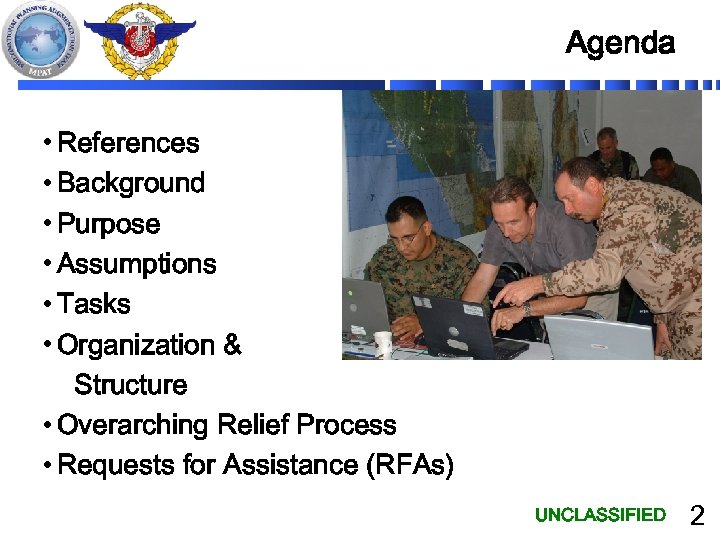 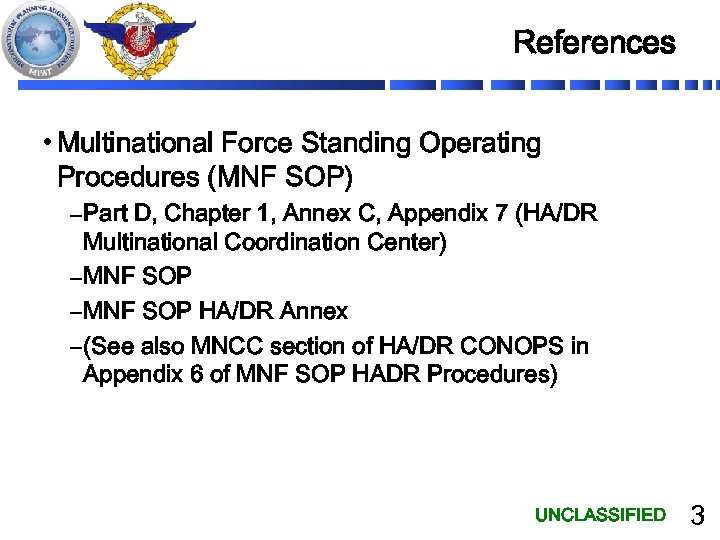 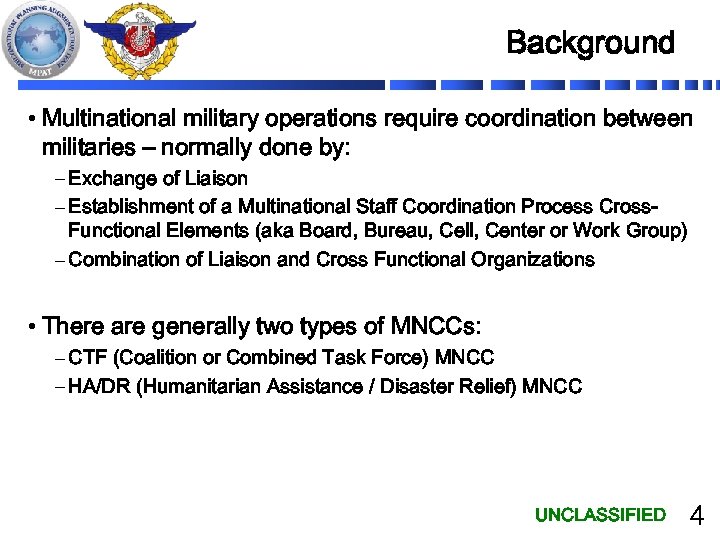 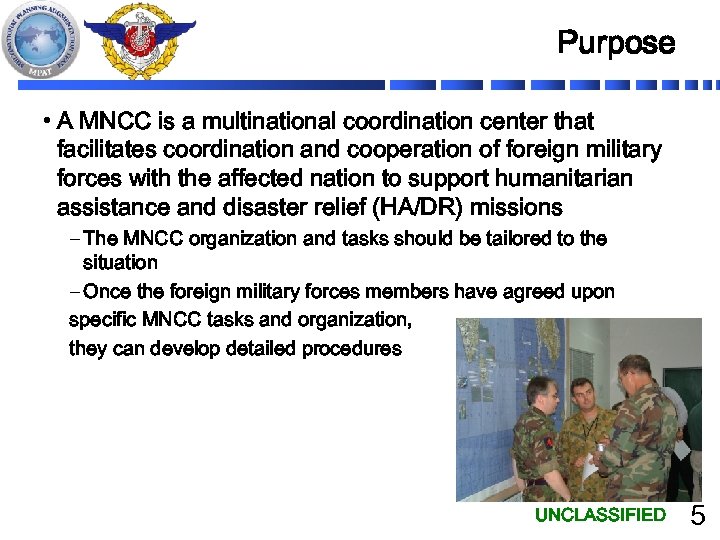 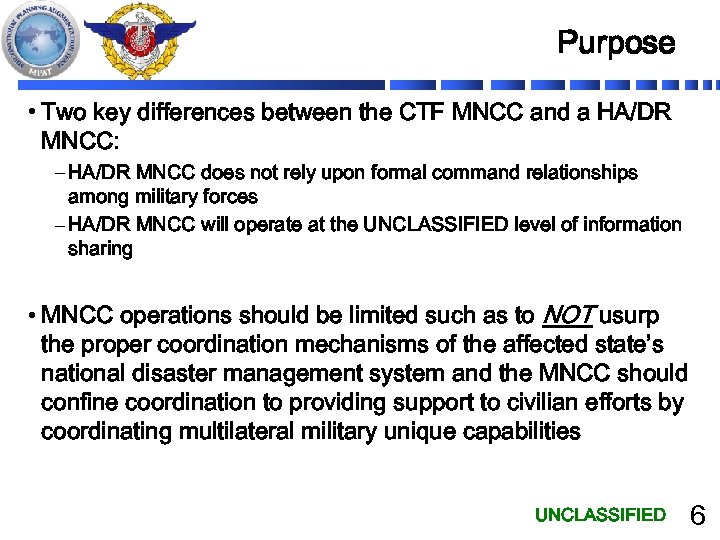 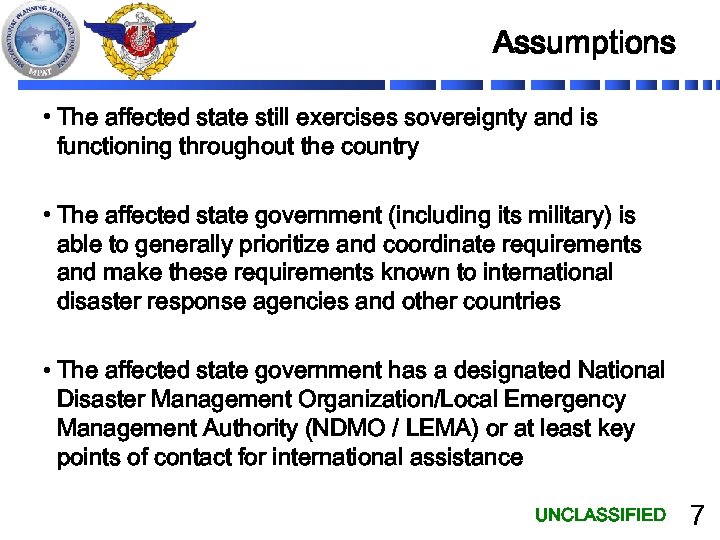 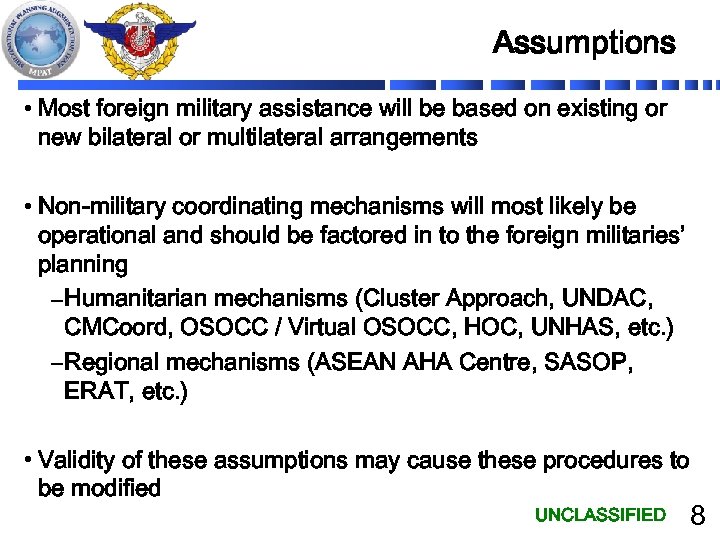 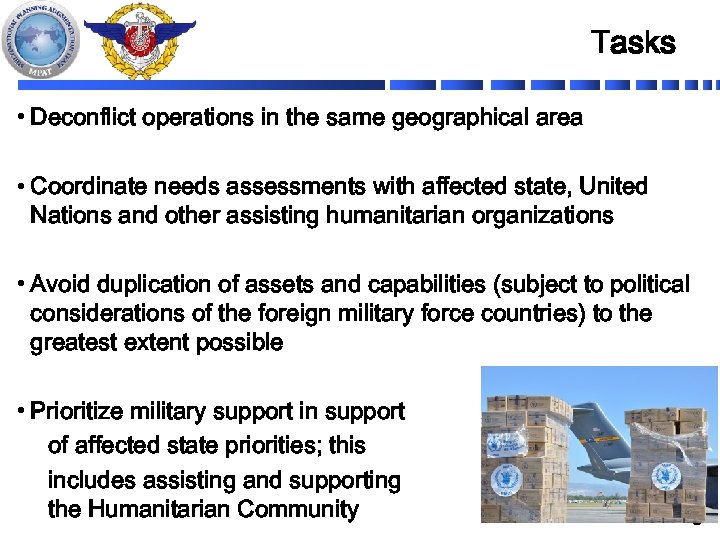 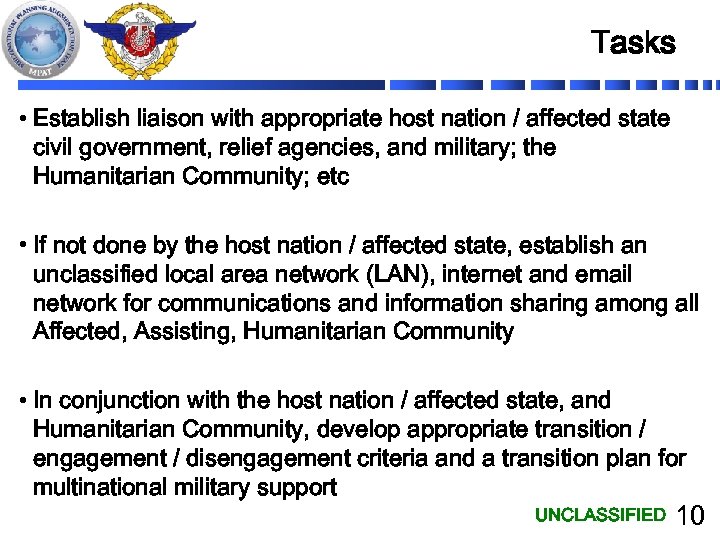 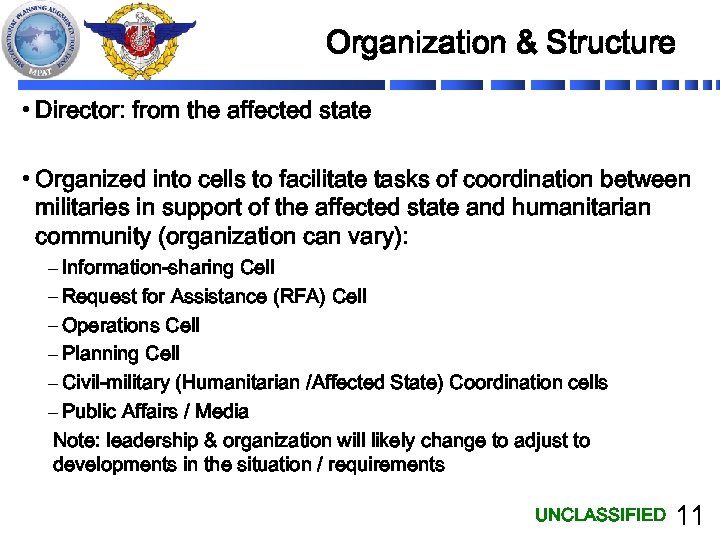 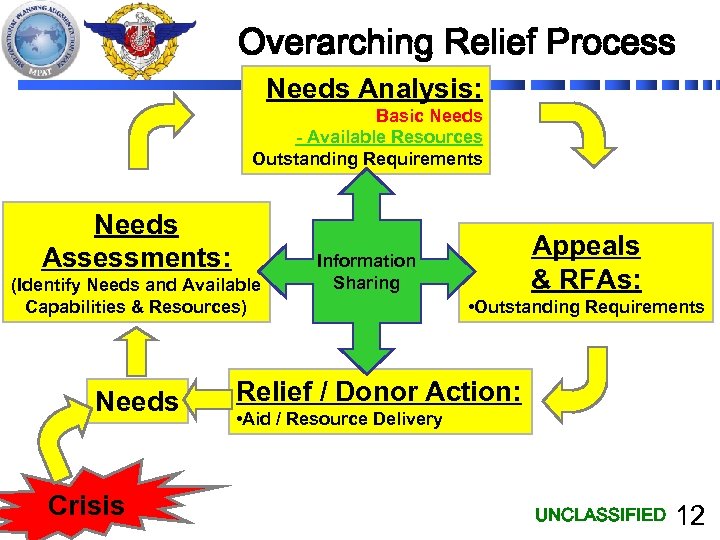 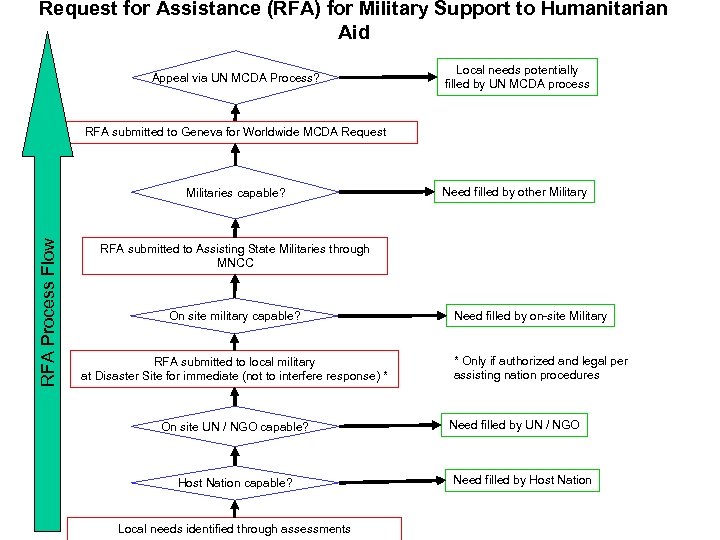 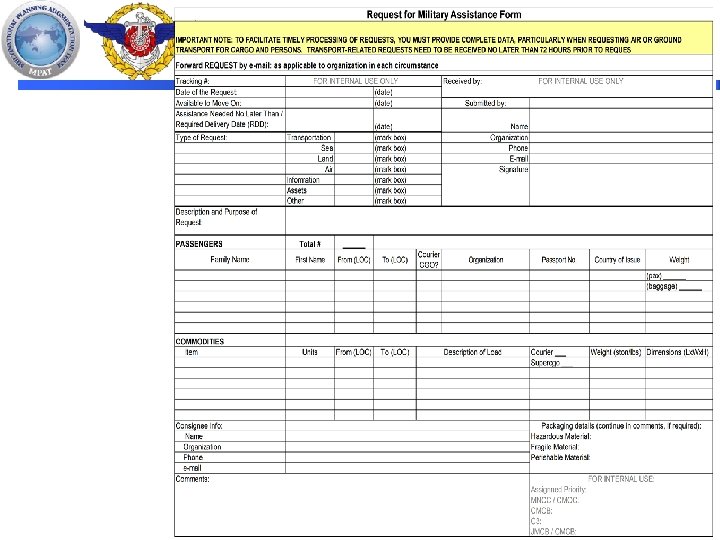 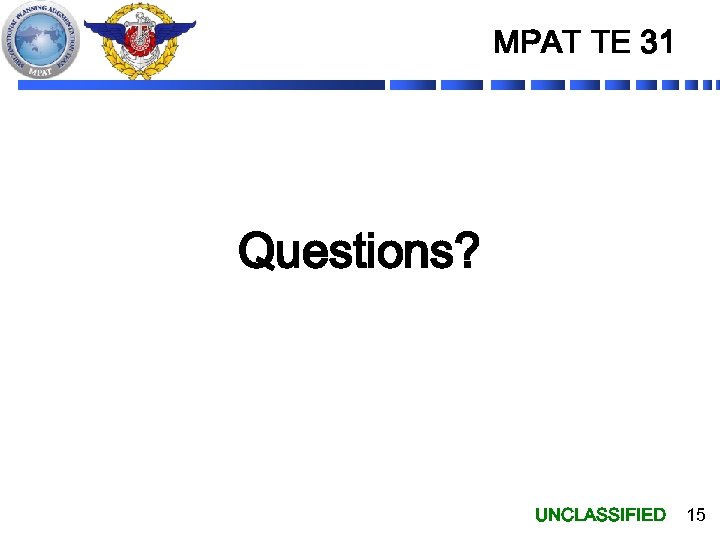 Purpose • A MNCC is a multinational coordination center that facilitates coordination and cooperation of foreign military forces with the affected nation to support humanitarian assistance and disaster relief (HA/DR) missions – The MNCC organization and tasks should be tailored to the situation – Once the foreign military forces members have agreed upon specific MNCC tasks and organization, they can develop detailed procedures UNCLASSIFIED 5

Purpose • Two key differences between the CTF MNCC and a HA/DR MNCC: – HA/DR MNCC does not rely upon formal command relationships among military forces – HA/DR MNCC will operate at the UNCLASSIFIED level of information sharing • MNCC operations should be limited such as to NOT usurp the proper coordination mechanisms of the affected state’s national disaster management system and the MNCC should confine coordination to providing support to civilian efforts by coordinating multilateral military unique capabilities UNCLASSIFIED 6

Assumptions • Most foreign military assistance will be based on existing or new bilateral or multilateral arrangements • Non-military coordinating mechanisms will most likely be operational and should be factored in to the foreign militaries’ planning – Humanitarian mechanisms (Cluster Approach, UNDAC, CMCoord, OSOCC / Virtual OSOCC, HOC, UNHAS, etc. ) – Regional mechanisms (ASEAN AHA Centre, SASOP, ERAT, etc. ) • Validity of these assumptions may cause these procedures to be modified UNCLASSIFIED 8