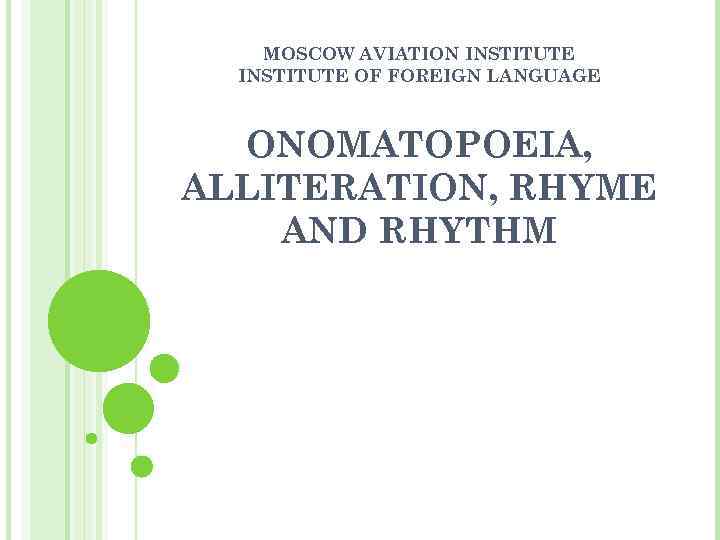 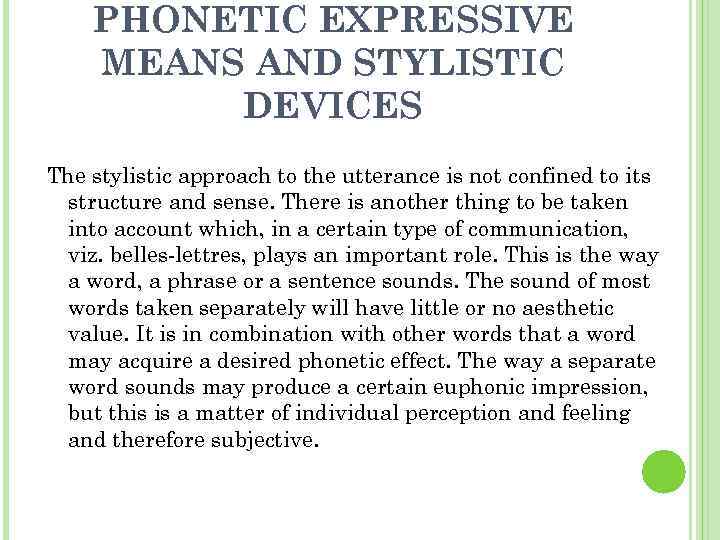 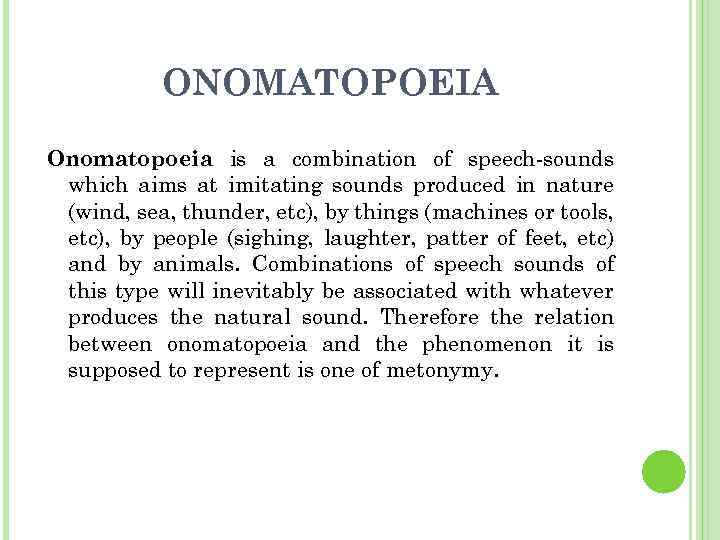 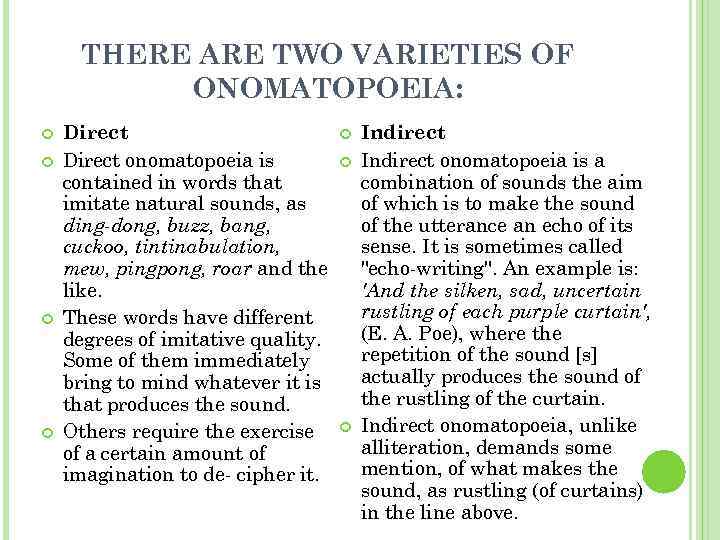 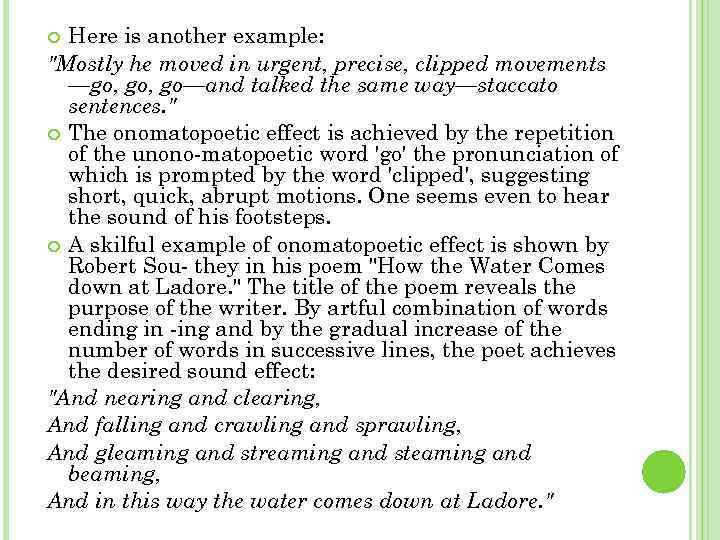 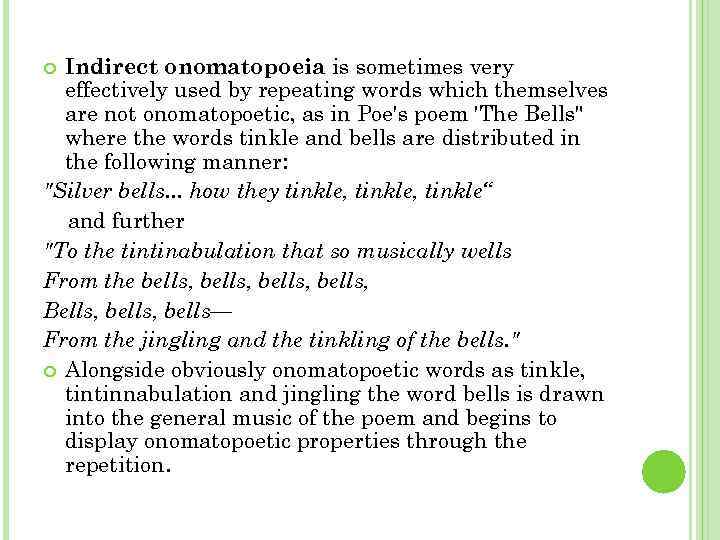 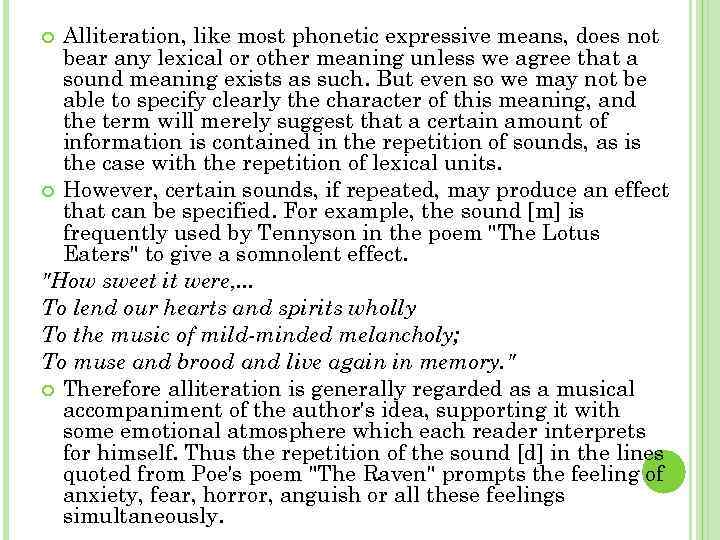 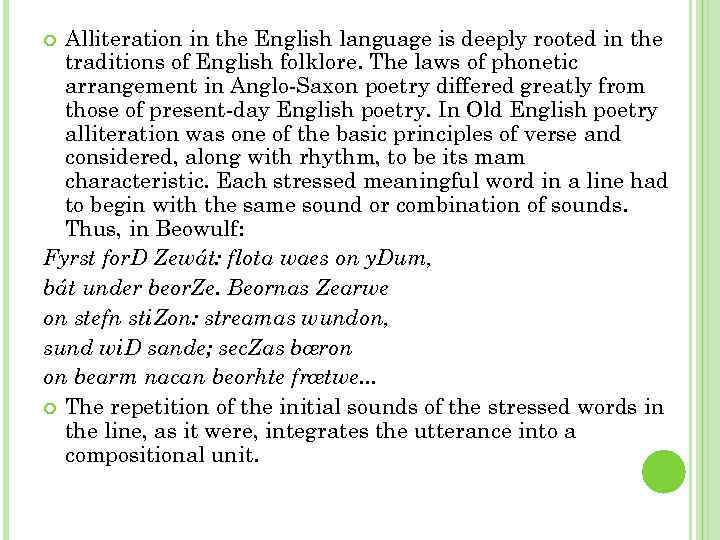 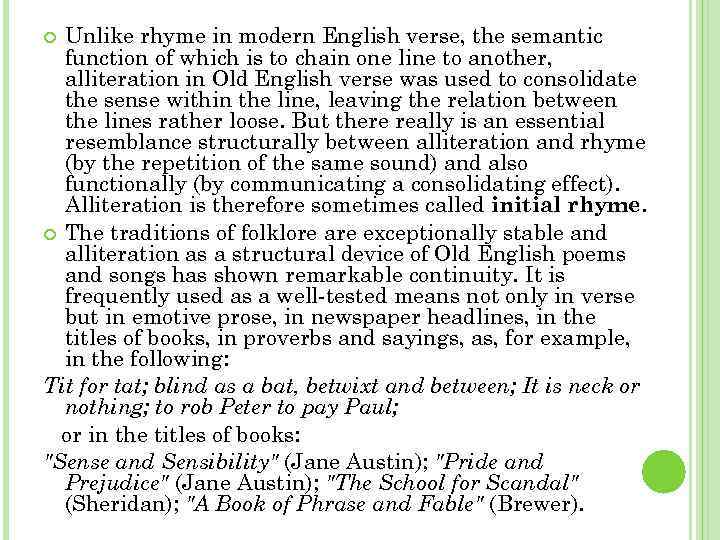 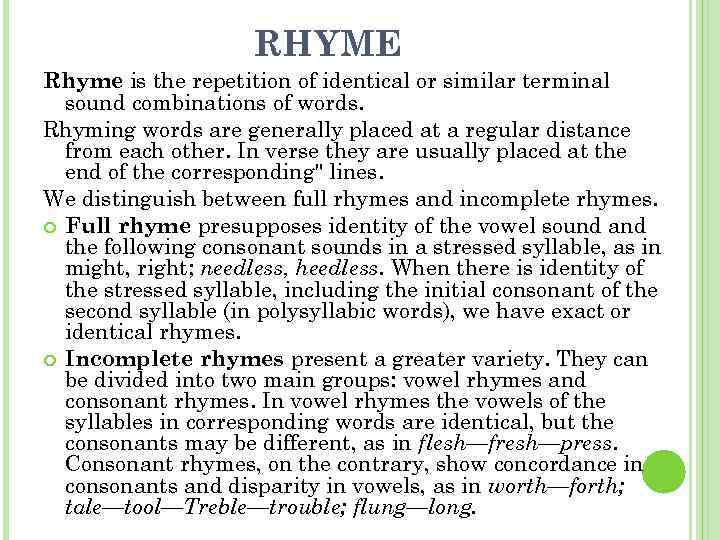 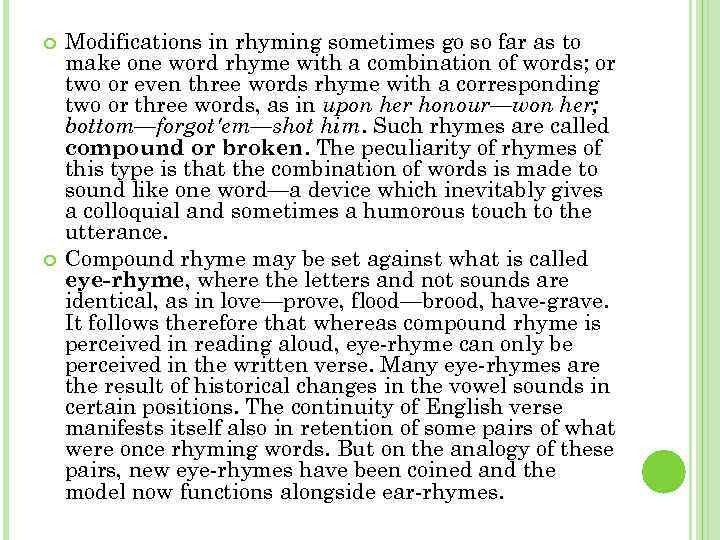 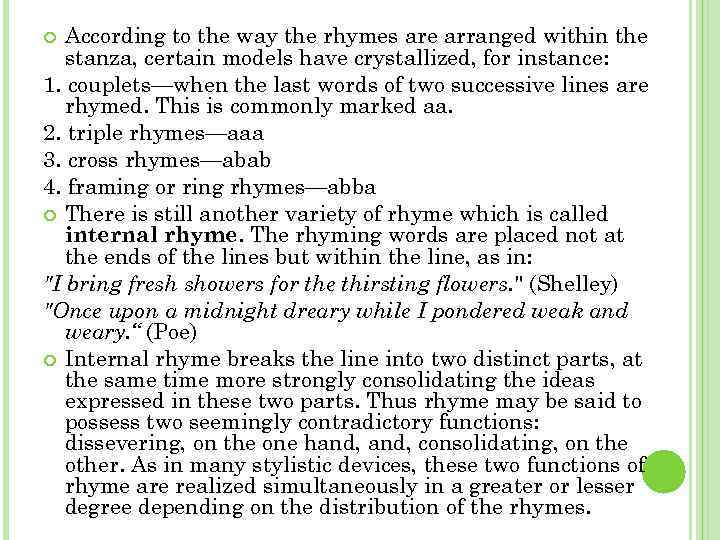 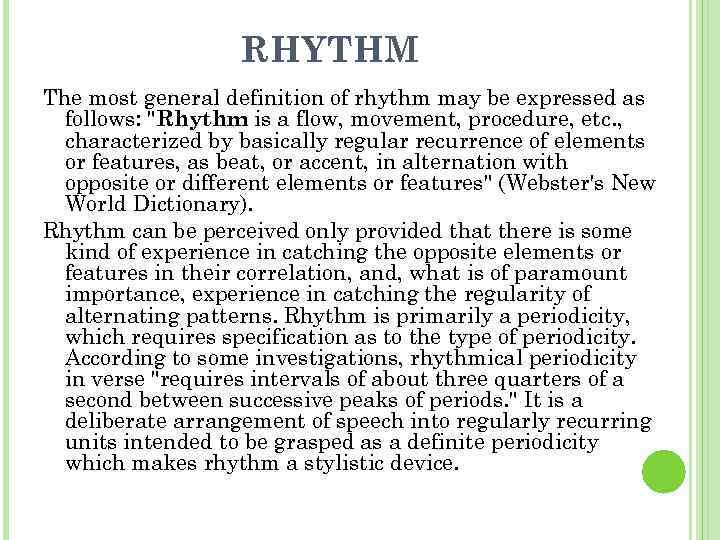 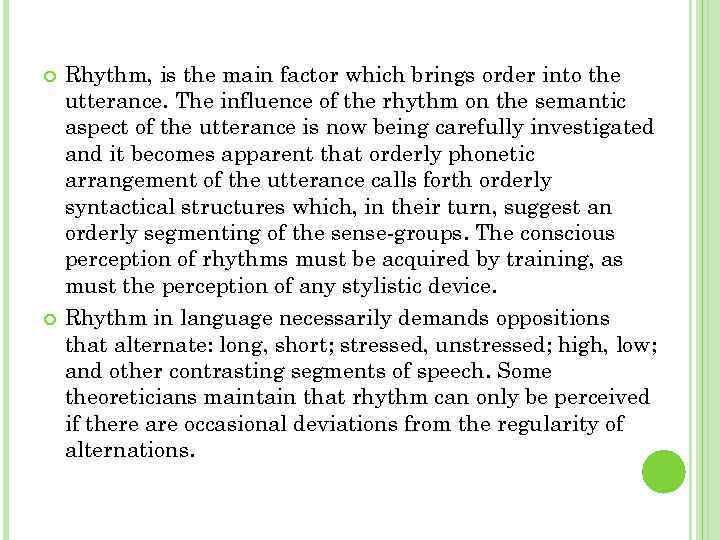 PHONETIC EXPRESSIVE MEANS AND STYLISTIC DEVICES The stylistic approach to the utterance is not confined to its structure and sense. There is another thing to be taken into account which, in a certain type of communication, viz. belles-lettres, plays an important role. This is the way a word, a phrase or a sentence sounds. The sound of most words taken separately will have little or no aesthetic value. It is in combination with other words that a word may acquire a desired phonetic effect. The way a separate word sounds may produce a certain euphonic impression, but this is a matter of individual perception and feeling and therefore subjective.

ONOMATOPOEIA Onomatopoeia is a combination of speech-sounds which aims at imitating sounds produced in nature (wind, sea, thunder, etc), by things (machines or tools, etc), by people (sighing, laughter, patter of feet, etc) and by animals. Combinations of speech sounds of this type will inevitably be associated with whatever produces the natural sound. Therefore the relation between onomatopoeia and the phenomenon it is supposed to represent is one of metonymy.

THERE ARE TWO VARIETIES OF ONOMATOPOEIA: Direct Direсt onomatopoeia is contained in words that imitate natural sounds, as ding-dong, buzz, bang, cuckoo, tintinabulation, mew, pingpong, roar and the like. These words have different degrees of imitative quality. Some of them immediately bring to mind whatever it is that produces the sound. Others require the exercise of a certain amount of imagination to de- cipher it. Indirect Indirесt onomatороеia is a combination of sounds the aim of which is to make the sound of the utterance an echo of its sense. It is sometimes called "echo-writing". An example is: 'And the silken, sad, uncertain rustling of each purple curtain', (E. A. Poe), where the repetition of the sound [s] actually produces the sound of the rustling of the curtain. Indirect onomatopoeia, unlike alliteration, demands some mention, of what makes the sound, as rustling (of curtains) in the line above.

Here is another example: "Mostly he moved in urgent, precise, clipped movements —go, go—and talked the same way—staccato sentences. " The onomatopoetic effect is achieved by the repetition of the unono-matopoetic word 'go' the pronunciation of which is prompted by the word 'clipped', suggesting short, quick, abrupt motions. One seems even to hear the sound of his footsteps. A skilful example of onomatopoetic effect is shown by Robert Sou- they in his poem "How the Water Comes down at Ladore. " The title of the poem reveals the purpose of the writer. By artful combination of words ending in -ing and by the gradual increase of the number of words in successive lines, the poet achieves the desired sound effect: "And nearing and clearing, And falling and crawling and sprawling, And gleaming and streaming and steaming and beaming, And in this way the water comes down at Ladore. "

Indirect onomatopoeia is sometimes very effectively used by repeating words which themselves are not onomatopoetic, as in Poe's poem 'The Bells" where the words tinkle and bells are distributed in the following manner: "Silver bells. . . how they tinkle, tinkle“ and further "To the tintinabulation that so musically wells From the bells, Bells, bells— From the jingling and the tinkling of the bells. " Alongside obviously onomatopoetic words as tinkle, tintinnabulation and jingling the word bells is drawn into the general music of the poem and begins to display onomatopoetic properties through the repetition.

ALLITERATION Alliteration is a phonetic stylistic device which aims at imparting a melodic effect to the utterance. The essence of this device lies in the repetition of similar sounds, in particular consonant sounds, in close succession, particularly at the beginning of successive words: "The possessive instinct never stands still. Through florescence and feud, frosts and fires it follows the laws of progression. " (Galsworthy) "Deep into the darkness peering, long I stood there wondering, fearing, "Doubting, dreaming dreams no mortals ever dared to dream before. " (E. A. Poe)

Alliteration, like most phonetic expressive means, does not bear any lexical or other meaning unless we agree that a sound meaning exists as such. But even so we may not be able to specify clearly the character of this meaning, and the term will merely suggest that a certain amount of information is contained in the repetition of sounds, as is the case with the repetition of lexical units. However, certain sounds, if repeated, may produce an effect that can be specified. For example, the sound [m] is frequently used by Tennyson in the poem "The Lotus Eaters" to give a somnolent effect. "How sweet it were, . . . To lend our hearts and spirits wholly To the music of mild-minded melancholy; To muse and brood and live again in memory. " Therefore alliteration is generally regarded as a musical accompaniment of the author's idea, supporting it with some emotional atmosphere which each reader interprets for himself. Thus the repetition of the sound [d] in the lines quoted from Poe's poem "The Raven" prompts the feeling of anxiety, fear, horror, anguish or all these feelings simultaneously.

Alliteration in the English language is deeply rooted in the traditions of English folklore. The laws of phonetic arrangement in Anglo-Saxon poetry differed greatly from those of present-day English poetry. In Old English poetry alliteration was one of the basic principles of verse and considered, along with rhythm, to be its mam characteristic. Each stressed meaningful word in a line had to begin with the same sound or combination of sounds. Thus, in Beowulf: Fyrst for. D Zewát: flota waes on y. Dum, bát under beor. Ze. Beornas Zearwe on stefn sti. Zon: streamas wundon, sund wi. D sande; sec. Zas bæron on bearm nacan beorhte frætwe. . . The repetition of the initial sounds of the stressed words in the line, as it were, integrates the utterance into a compositional unit.

Unlike rhyme in modern English verse, the semantic function of which is to chain one line to another, alliteration in Old English verse was used to consolidate the sense within the line, leaving the relation between the lines rather loose. But there really is an essential resemblance structurally between alliteration and rhyme (by the repetition of the same sound) and also functionally (by communicating a consolidating effect). Alliteration is therefore sometimes called initial rhyme. The traditions of folklore are exceptionally stable and alliteration as a structural device of Old English poems and songs has shown remarkable continuity. It is frequently used as a well-tested means not only in verse but in emotive prose, in newspaper headlines, in the titles of books, in proverbs and sayings, as, for example, in the following: Tit for tat; blind as a bat, betwixt and between; It is neck or nothing; to rob Peter to pay Paul; or in the titles of books: "Sense and Sensibility" (Jane Austin); "Pride and Prejudice" (Jane Austin); "The School for Scandal" (Sheridan); "A Book of Phrase and Fable" (Brewer).

RHYME Rhуme is the repetition of identical or similar terminal sound combinations of words. Rhyming words are generally placed at a regular distance from each other. In verse they are usually placed at the end of the corresponding" lines. We distinguish between full rhymes and incomplete rhymes. Full rhyme presupposes identity of the vowel sound and the following consonant sounds in a stressed syllable, as in might, right; needless, heedless. When there is identity of the stressed syllable, including the initial consonant of the second syllable (in polysyllabic words), we have exact or identical rhymes. Incomplete rhymes present a greater variety. They can be divided into two main groups: vоwel rhуmеs and consonant rhymes. In vowel rhymes the vowels of the syllables in corresponding words are identical, but the consonants may be different, as in flesh—fresh—press. Consonant rhymes, on the contrary, show concordance in consonants and disparity in vowels, as in worth—forth; tale—tool—Treble—trouble; flung—long.

Modifications in rhyming sometimes go so far as to make one word rhyme with a combination of words; or two or even three words rhyme with a corresponding two or three words, as in upon her honour—won her; bottom—forgot'em—shot him. Such rhymes are called compound or broken. The peculiarity of rhymes of this type is that the combination of words is made to sound like one word—a device which inevitably gives a colloquial and sometimes a humorous touch to the utterance. Compound rhyme may be set against what is called eуe-rhyme, where the letters and not sounds are identical, as in love—prove, flood—brood, have-grave. It follows therefore that whereas compound rhyme is perceived in reading aloud, eye-rhyme can only be perceived in the written verse. Many eye-rhymes are the result of historical changes in the vowel sounds in certain positions. The continuity of English verse manifests itself also in retention of some pairs of what were once rhyming words. But on the analogy of these pairs, new eye-rhymes have been coined and the model now functions alongside ear-rhymes.

According to the way the rhymes are arranged within the stanza, certain models have crystallized, for instance: 1. couplets—when the last words of two successive lines are rhymed. This is commonly marked aa. 2. triple rhymes—aaa 3. cross rhymes—abab 4. framing or ring rhymes—abba There is still another variety of rhyme which is called internal rhуme. The rhyming words are placed not at the ends of the lines but within the line, as in: "I bring fresh showers for the thirsting flowers. " (Shelley) "Once upon a midnight dreary while I pondered weak and weary. “ (Рое) Internal rhyme breaks the line into two distinct parts, at the same time more strongly consolidating the ideas expressed in these two parts. Thus rhyme may be said to possess two seemingly contradictory functions: dissevering, on the one hand, сonsolidating, on the other. As in many stylistic devices, these two functions of rhyme are realized simultaneously in a greater or lesser degree depending on the distribution of the rhymes.

RHYTHM The most general definition of rhythm may be expressed as follows: "Rhythm is a flow, movement, procedure, etc. , characterized by basically regular recurrence of elements or features, as beat, or accent, in alternation with opposite or different elements or features" (Webster's New World Dictionary). Rhythm can be perceived only provided that there is some kind of experience in catching the opposite elements or features in their correlation, and, what is of paramount importance, experience in catching the regularity of alternating patterns. Rhythm is primarily a periоdicity, which requires specification as to the type of periodicity. According to some investigations, rhythmical periodicity in verse "requires intervals of about three quarters of a second between successive peaks of periods. " It is a deliberate arrangement of speech into regularly recurring units intended to be grasped as a definite periodicity which makes rhythm a stylistic device.

Rhythm, is the main factor which brings order into the utterance. The influence of the rhythm on the semantic aspect of the utterance is now being carefully investigated and it becomes apparent that orderly phonetic arrangement of the utterance calls forth orderly syntactical structures which, in their turn, suggest an orderly segmenting of the sense-groups. The conscious perception of rhythms must be acquired by training, as must the perception of any stylistic device. Rhythm in language necessarily demands oppositions that alternate: long, short; stressed, unstressed; high, low; and other contrasting segments of speech. Some theoreticians maintain that rhythm can only be perceived if there are occasional deviations from the regularity of alternations.