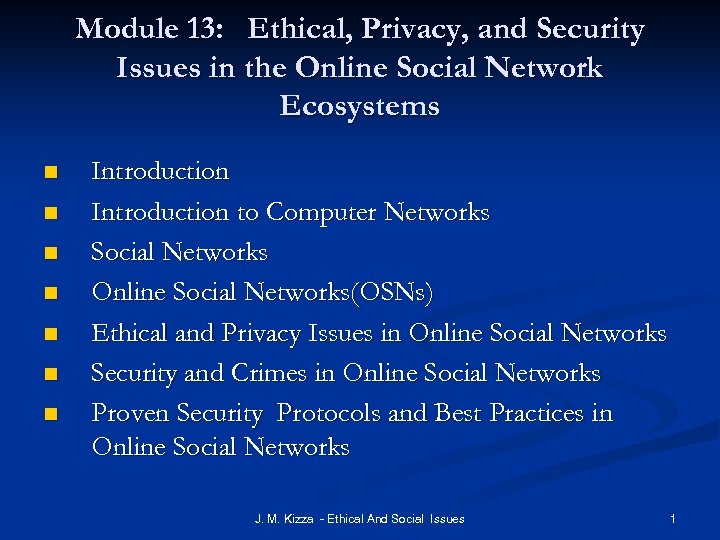 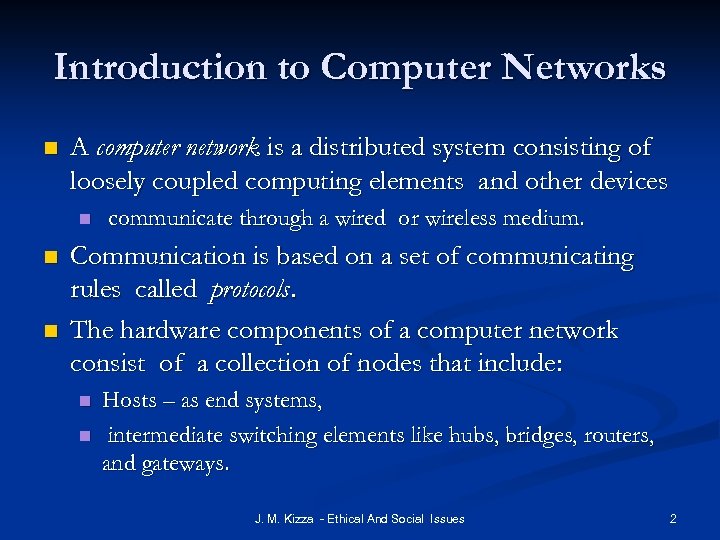 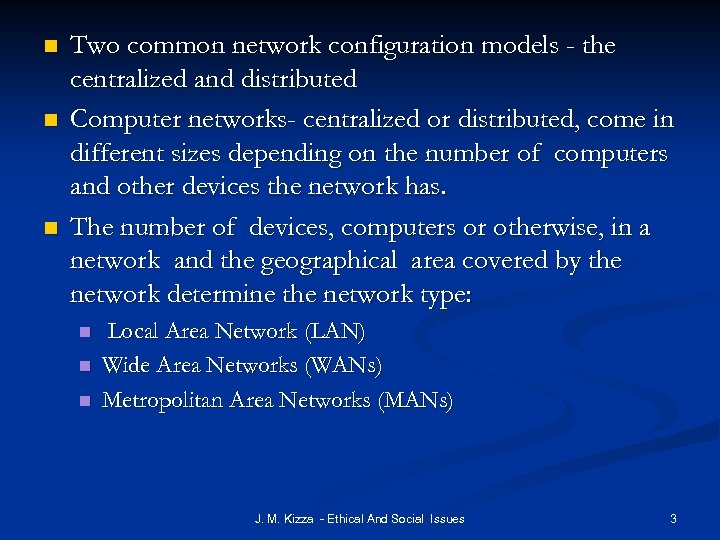 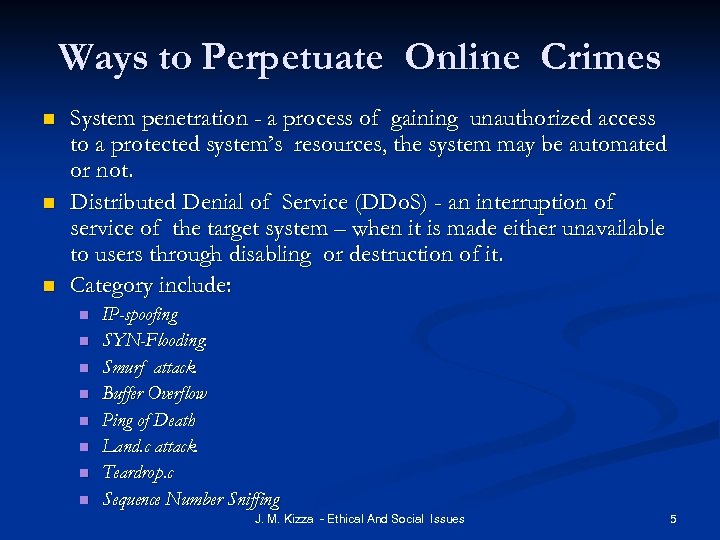 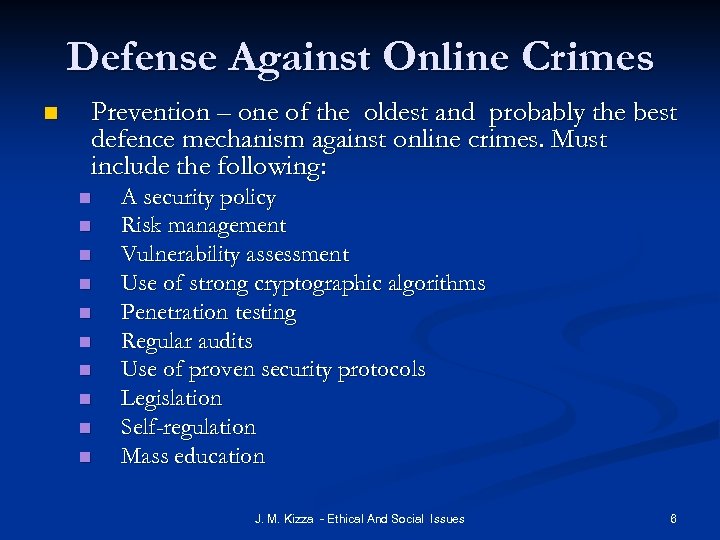 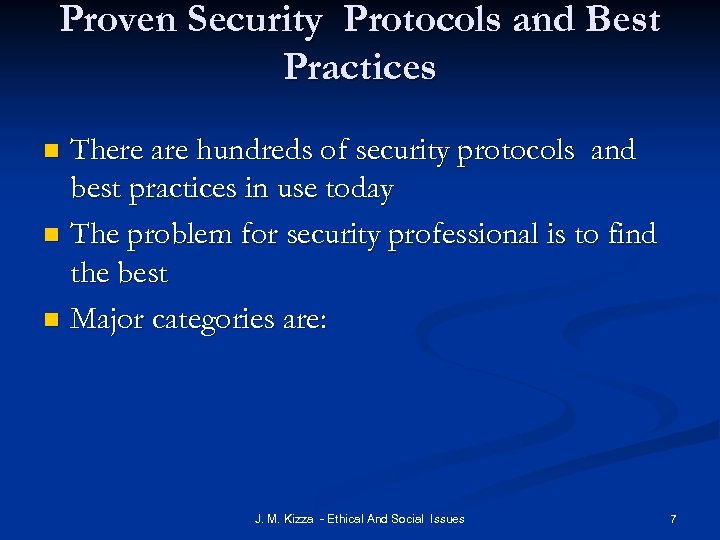 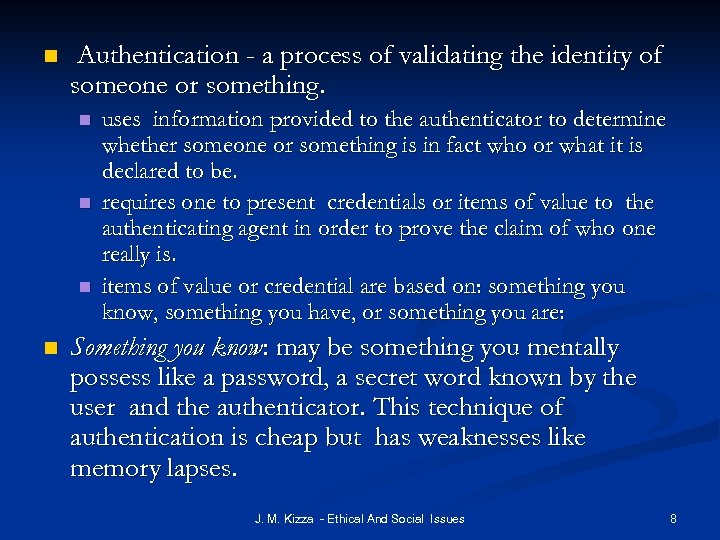 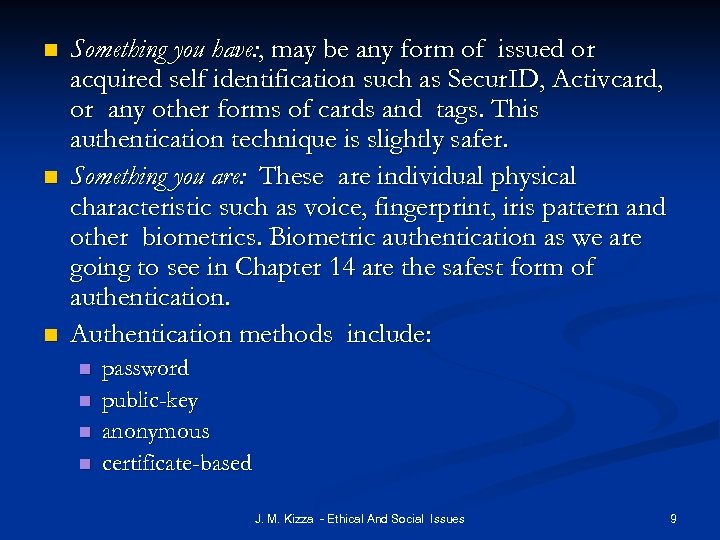 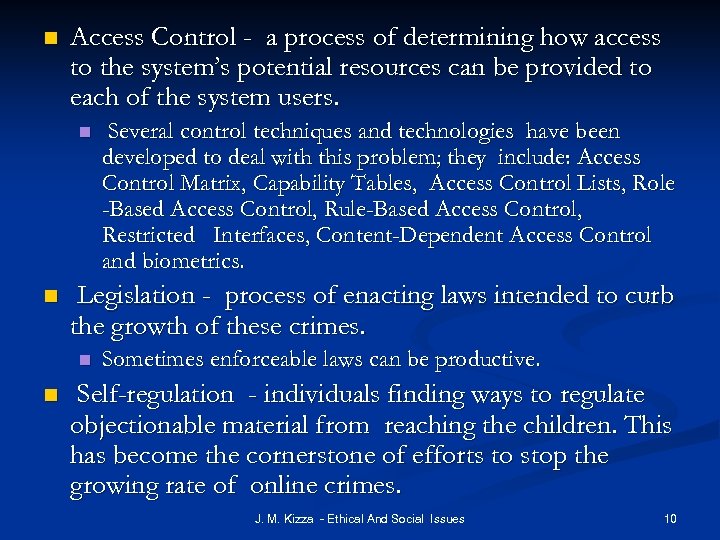 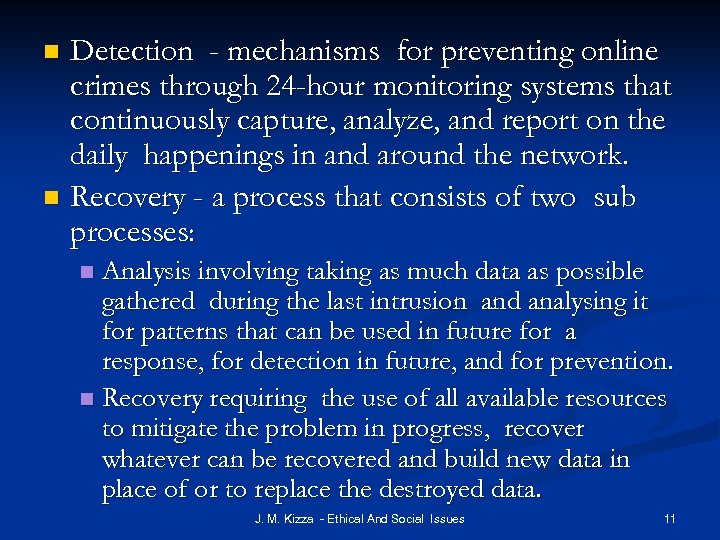 Introduction to Computer Networks n A computer network is a distributed system consisting of loosely coupled computing elements and other devices n n n communicate through a wired or wireless medium. Communication is based on a set of communicating rules called protocols. The hardware components of a computer network consist of a collection of nodes that include: n n Hosts – as end systems, intermediate switching elements like hubs, bridges, routers, and gateways. J. M. Kizza - Ethical And Social Issues 2

Online Crimes n n An online crime is a crime like any other crime, except it involves a connected computing system either as an object of a crime, an instrument used to commit a crime or a repository of evidence related to a crime. The International Convention of Cyber Crimes and the European Convention on Cyber Crimes both list the following crimes as online crime [1]: n n n Unlawful access to information Illegal interception of information Unlawful use of telecommunication equipment. Forgery with use of computer measures Intrusions of the Public Switched and Packet Network integrity violations Privacy violations Industrial espionage Pirated computer software Fraud using a computing system Internet/email abuse Using computers or computer technology to commit murder, terrorism, pornography, and hacking. J. M. Kizza - Ethical And Social Issues 4

Ways to Perpetuate Online Crimes n n n System penetration - a process of gaining unauthorized access to a protected system’s resources, the system may be automated or not. Distributed Denial of Service (DDo. S) - an interruption of service of the target system – when it is made either unavailable to users through disabling or destruction of it. Category include: n n n n IP-spoofing SYN-Flooding: Smurf attack Buffer Overflow Ping of Death Land. c attack Teardrop. c Sequence Number Sniffing J. M. Kizza - Ethical And Social Issues 5

Proven Security Protocols and Best Practices There are hundreds of security protocols and best practices in use today n The problem for security professional is to find the best n Major categories are: n J. M. Kizza - Ethical And Social Issues 7

n n n Something you have: , may be any form of issued or acquired self identification such as Secur. ID, Activcard, or any other forms of cards and tags. This authentication technique is slightly safer. Something you are: These are individual physical characteristic such as voice, fingerprint, iris pattern and other biometrics. Biometric authentication as we are going to see in Chapter 14 are the safest form of authentication. Authentication methods include: n n password public-key anonymous certificate-based J. M. Kizza - Ethical And Social Issues 9

n Access Control - a process of determining how access to the system’s potential resources can be provided to each of the system users. n n Legislation - process of enacting laws intended to curb the growth of these crimes. n n Several control techniques and technologies have been developed to deal with this problem; they include: Access Control Matrix, Capability Tables, Access Control Lists, Role -Based Access Control, Rule-Based Access Control, Restricted Interfaces, Content-Dependent Access Control and biometrics. Sometimes enforceable laws can be productive. Self-regulation - individuals finding ways to regulate objectionable material from reaching the children. This has become the cornerstone of efforts to stop the growing rate of online crimes. J. M. Kizza - Ethical And Social Issues 10

Detection - mechanisms for preventing online crimes through 24 -hour monitoring systems that continuously capture, analyze, and report on the daily happenings in and around the network. n Recovery - a process that consists of two sub processes: n Analysis involving taking as much data as possible gathered during the last intrusion and analysing it for patterns that can be used in future for a response, for detection in future, and for prevention. n Recovery requiring the use of all available resources to mitigate the problem in progress, recover whatever can be recovered and build new data in place of or to replace the destroyed data. n J. M. Kizza - Ethical And Social Issues 11