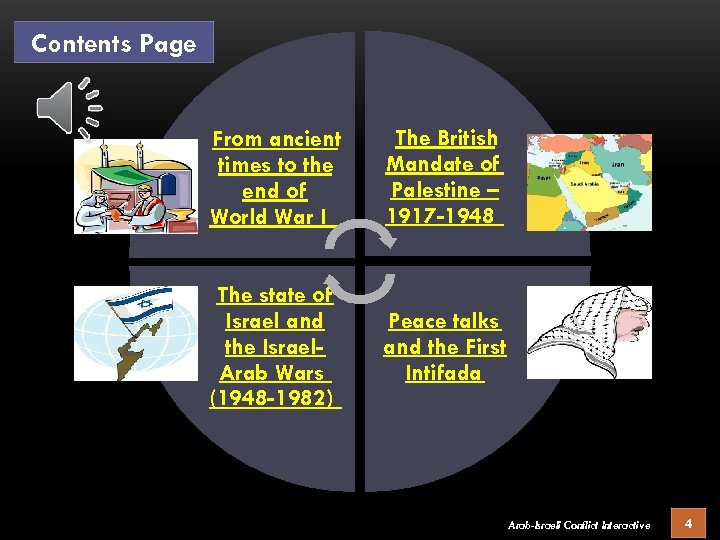 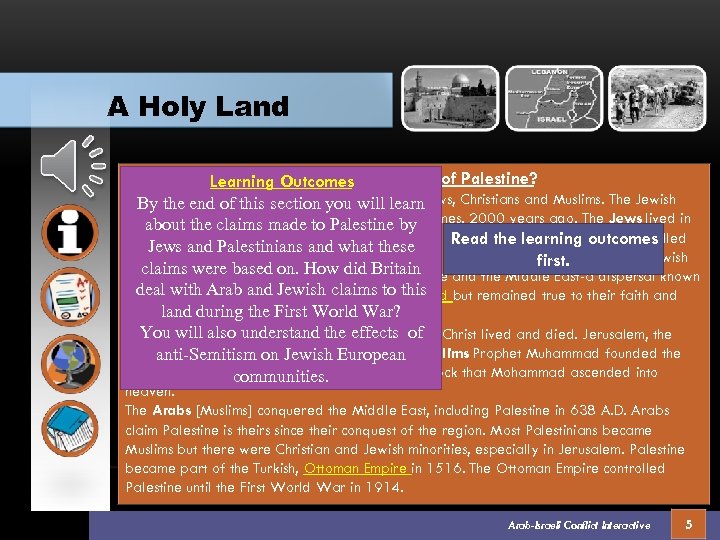 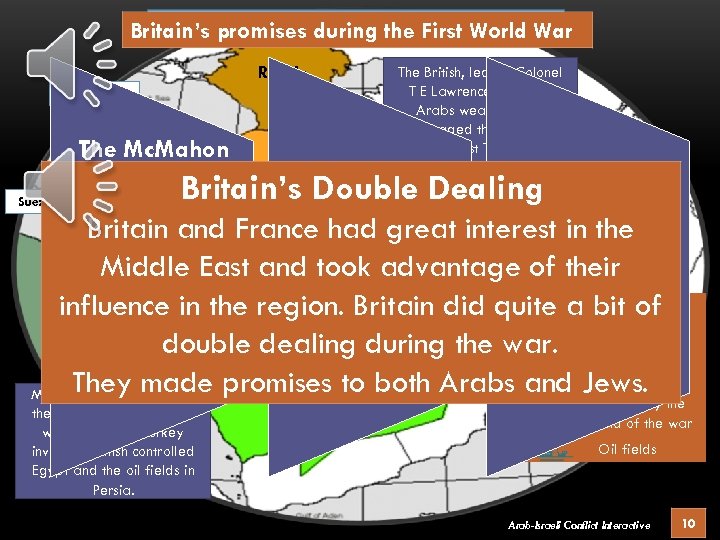 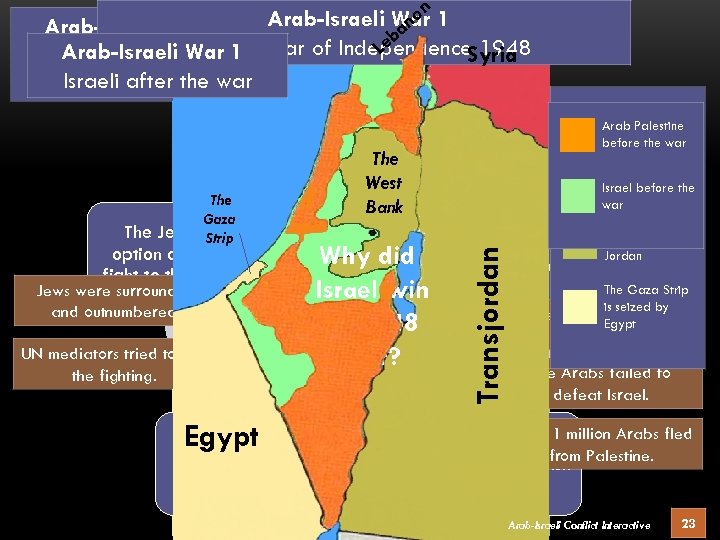 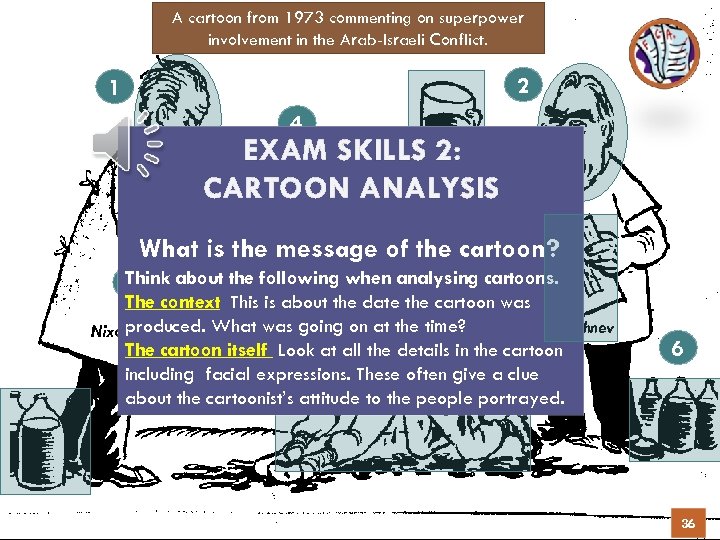 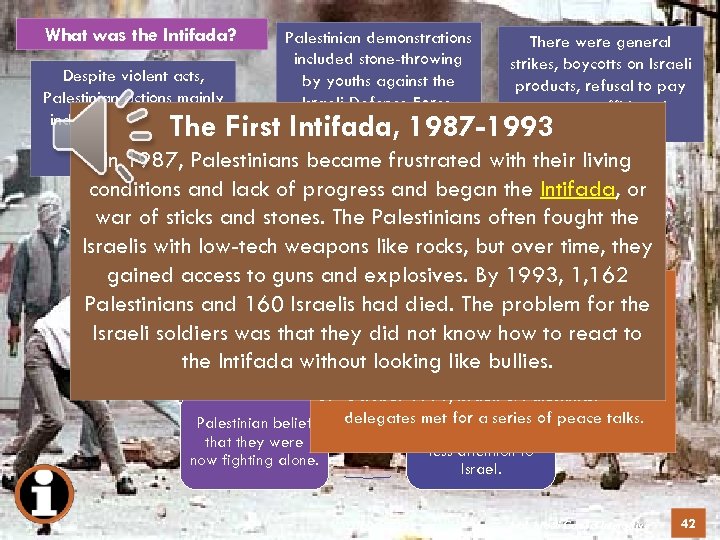 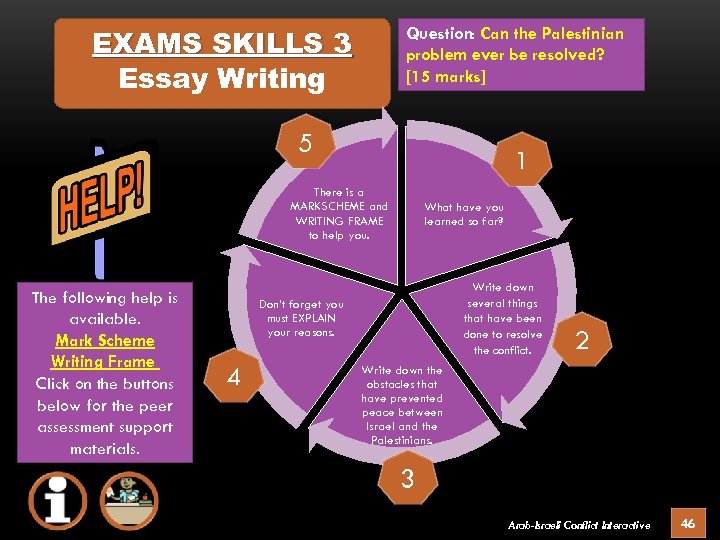 MODERN WORLD HISTORY THE ARAB-ISRAELI CONFLICT INTERACTIVE Why has the Arab-Israeli Conflict been so difficult to resolve?

The Arab-Israeli Conflict One land, two peoples The Arab-Israeli Conflict What is this conflict about? The USSR have supported Arab countries in the Middle East. The Arab-Israeli conflict is essentially about land. Two peoples, the Jews and the Palestinians both claim the same territory. The Jews know this land as Israel, the Palestinian Arabs, who also lived there, call it Palestine. Religion and race has made the conflict more bitter. Jewish or Israelis are Jewish and believe that God has given the land of Israel to Arab them. The Palestinians are Muslims and believe it is their duty to drive Homeland? The USA has a large clash makes the conflict much harder to solve. out the Jews. This Jewish community and Intervention by neighbouring Arab countries, the USA and the USSR has Israelis Palestinians have supported Israel. Since 1917, By 2011, made the situation even more complicated. the Middle the conflict has Religion: mainly Jewish Religion: Muslim (90%), Christian (10%) lasted. Language: Hebrew century. East longbeen theconflict continued, the more than half a As has as the focus ofbecame to settle. world attention. Language: Arabic The Supported by USA more. Britain it and difficult Supported by Arab countries and USSR conflict between Israel and the Palestinians has led to conflict in the whole region. Arab-Israeli Conflict Interactive 3

Contents Page From ancient times to the end of World War I The British Mandate of Palestine – 1917 -1948 The state of Israel and the Israel. Arab Wars (1948 -1982) Peace talks and the First Intifada Arab-Israeli Conflict Interactive 4

A Holy Land Why did the religions all claim ownership of Palestine? Learning Outcomes Palestine was of great section you will learn. Jews, Christians and Muslims. The Jewish By the end of this religious importance to claim to the land of Israel goes back to biblical times, 2000 years ago. The Jews lived in about the claims made to Palestine by the area now known as Israel. It was part of the Roman Empire. When the Jews rebelled Read the learning outcomes Jews and Palestinians and what these against Roman rule in 72 A. D. , they were crushed. By about 100 first. most of the Jewish A. D. , claims were based on. How did Britain population of Israel had spread throughout Europe and the Middle East-a dispersal known deal with Arab and Jewish claims to this as the diaspora. Jews were frequently persecuted but remained true to their faith and land traditions. during the First World War? To. You will also understand the effects Jesus Christ lived and died. Jerusalem, the Christians, Palestine was the land where of district's most important city, was also holy to Muslims Prophet Muhammad founded the. anti-Semitism on Jewish European Islamic faith herecommunities. from its holy rock that Mohammad ascended into in 610 CE. It was heaven. The Arabs [Muslims] conquered the Middle East, including Palestine in 638 A. D. Arabs claim Palestine is theirs since their conquest of the region. Most Palestinians became Muslims but there were Christian and Jewish minorities, especially in Jerusalem. Palestine became part of the Turkish, Ottoman Empire in 1516. The Ottoman Empire controlled Palestine until the First World War in 1914. Arab-Israeli Conflict Interactive 5

WAR IN THE MIDDLE the First World War Britain’s promises during. EAST 1914 -1918 Russia Gallipoli The British, led by Colonel T E Lawrence gave the Arabs weapons and encouraged them to revolt against Turkey. ta po so Me Turkey The Mc. Mahon Ottoman Empire Declaration The Sykes-Picot The During the First World War. Dealing Balfour Britain’s Agreement 1914 -1918, the Double Suez Canal (1915) Declaration Ottoman Empire allied with Germanyin the and Britain British France had great interest(1917) and Syria (1916)Persia Promised Austria Arab and took would France and Middle East against Britain, Britain supported support for. Hungary Palestineadvantage of their independence, if be to quicken the collapse the a bit attacks Russia. The war helped under Allied a influence in the region. Britain did quiteidea ofof Egypt Attacks thethe Ottoman Empire. Arabs and Jews both by TE Arabs rose Arabia international Jewish homeland ofup against double dealing during the war. Lawrence and administration. in Palestine. the Arabs hoped rule. fill the vacuum left by its collapse. lost Land They made promises to both Arabs and Jews. by Turkish to Mesopotamia was part of a mi the Turkish Empire. Britain wanted to stop Turkey invading British controlled Egypt and the oil fields in Persia. Turkey by the end of the war Oil fields Arab-Israeli Conflict Interactive 10

Arab Revolt 1936 -1939 Exam Skills 1: Short answer questions What were the main causes of the Arab Revolt? Tension increased between Jews and Arabs as the number of Jews entering Palestine increased. Between 1936 and 1939 there was an Arab revolt, sparked off by Arab anger and frustration. They feared that Britain was about to hand Palestine over to the Jews. By 1936, there were 400, 000 Jews in Palestine. Many of them were better educated than most Arabs. Jews were also supported by Jews from around the world. This and their ability, enabled Jews to buy up land, set up businesses and prosper. Arab guerrillas attacked Jewish farms, homes and businesses. This was mainly because Arab tenant farmers lost their home and livelihood when landowners sold land to the Jews. In 1936, a full-scale rebellion broke out involving Palestinians at all levels of society. A British army of 20, 000 men was tied down in Palestine and in 1938 alone, 70 British soldiers, 90 Jews and 1700 Arabs were killed in disturbances. The fighting was mainly between the British and the Arabs. The rebellion continued until 1939, although the severe British response from 1937 - controls, searches and blowing up of houses to flush out the rebels within - gradually weakened the revolt. Why did Britain fail to control Palestine in the years between 1922 and 1939? [8 marks] Arab-Israeli Conflict Interactive 18

British Mandate KEYWORDS Administration To managed or look after Contradictory Saying opposite or inconsistent things Emigration Leaving your country or region to settle in another Guerrillas A small group engaging in irregular warfare carrying out acts of terror and sabotage Immigration Coming to live permanently in a foreign country Jewish Agency An organisation set up to help Jews settle in Palestine Mandate Territory surrendered by Turkey or Germany after World War I and put under the administration of Britain and France. Palestine Country in the Middle East claimed by Jews and Arabs Shantytowns A slum settlement Suez Canal Man made waterway linking the Mediterranean Sea and Red Sea Back to previous page Arab-Israeli Conflict Interactive 19

Lebanese on Arab-Israeli. Lebanon War 1 n Arab-Israeli War 1 Army Syrian ba Le Israeli War of Independence 1948 Arab-Israeli War 1 Syria Israeli War of Army Israeli after 1948 Haifa Independence the war UN mediators tried to end the fighting. Egyptian River Jordan Israel win Israel 1948 the war? The Jews were better Army led and more heavily armed. Transjordan Jews were surrounded and outnumbered. Dead Sea Me dit err Sea anea n The Arab armies were Arab Palestine divided and poorly before the war led. The Saudi Israel after the West Army Israel before the war The Tel-Aviv war Jaffa Bank Jerusalem Gaza The West Bank is The Jews had no Strip seized by The Arabs Jordanian armies had option other than to Jordan Why did no co-ordinated plan. Gaza Hebron Army fight to the bitter end. In The Gaza Strip February is seized by 1949, the Egypt war ended. The Arabs failed to defeat Israel. Over The Jews had the 1 million Arabs fled from technical skills of British Palestine. trained officers. Arab-Israeli Conflict Interactive 23

A cartoon from 1973 commenting on superpower involvement in the Arab-Israeli Conflict. 2 1 4 EXAM SKILLS 2: CARTOON ANALYSIS 3 What is the message of the cartoon? Think about the following when analysing cartoons. 5 The context This is about the date the cartoon was produced. What was going on at the time? Brezhnev Nixon The cartoon itself Look at all the details in the cartoon including facial expressions. These often give a clue about the cartoonist’s attitude to the people portrayed. Arab-Israeli Conflict Interactive 6 36

What was the Intifada? What caused the Intifada? Palestinian demonstrations included stone-throwing Israeli presence in by youths against the Gaza Strip Israeli. West Bank. and Defence Force. Despite violent acts, Palestinian actions mainly included nonviolent civil disobedience and In 1987, resistance. Palestinians There were general strikes, boycotts on Israeli products, refusal to pay taxes, graffiti, and barricades. The First Intifada, 1987 -1993 became frustrated with their living conditions and lack of progress and began the Intifada, or Rising Palestinian The establishment unemployment and of more Jewish war of sticks and stones. The Palestinians often fought the unsolved settlements on Israelis with low-tech weapons like rocks, but over time, they refugee problem. Palestinian land. gained access to guns and explosives. By 1993, 1, 162 What were the results of the Intifada? Palestinians and 160 Israelis had died. Theswung against Israeli 1. International opinion problem for the tactics in Gaza and how to react Israeli soldiers was that they did not knowthe West Bank. to 2. The intifada put pressure on the Intifada without looking like bullies. the Israelis to seek negotiations with the Palestinians. 3. October 1991, Israeli & Palestinian delegates In thefor a series of peace talks. met 1980 s, many Palestinian belief that they were now fighting alone. Arab states paid less attention to Israel. Arab Israeli Conflict Interactive 42

EXAMS SKILLS 3 Essay Writing Question: Can the Palestinian problem ever be resolved? [15 marks] 5 1 There is a MARKSCHEME and WRITING FRAME to help you. The following help is available. Mark Scheme Writing Frame Click on the buttons below for the peer assessment support materials. What have you learned so far? Write down several things that have been done to resolve the conflict. Don’t forget you must EXPLAIN your reasons. 4 2 Write down the obstacles that have prevented peace between Israel and the Palestinians. 3 Arab-Israeli Conflict Interactive 46